This is my last post about Vietnam as tomorrow morning we are flying to Bangkok!

I discovered during these 3 weeks that Vietnam has many beautiful legends.
Here are some of them.

The legend of the origins of the Vietnamese

According to the legend, they descend from the union of the dragon Lord Lac Long Quan and the fairy Au Co. Their relationship was fruitful, producing 100 sons, 50 migrating with their mother to the mountains and the other half travelling with their father to the sea. These sons founded the first Vietnamese dynasty, the Hung, who ruled over the kingdom of Van Lang, whose people were the first to be known as the Lac Viet.

The legend of the lovers fairies of Nha Trang

We couldn’t visit the Hon Chong Promontory in Nha Trang because it was too late when we arrived there and it was closed. There is a legend there of a drunken giant male fairy who was spying on a female fairy bathing nude at Bai Tien (Fairy Beach). They fell in love but the gods intervened, sending the male fairy away. The lovesick female fairy waited patiently for him to return, but after a very long time she lay down in sorrow and turned into Nui Co Tien (Fairy Mountain). The peak on the right is supposed to be her face, gazing up towards the sky, the middle peak is her breasts and the summit on the left (the highest) forms her crossed legs.

I tried to spot the fairy in the mountains surrounding the promontory, but I am not sure I spotted the right one! Suddenly, all mountains looked like this fairy! 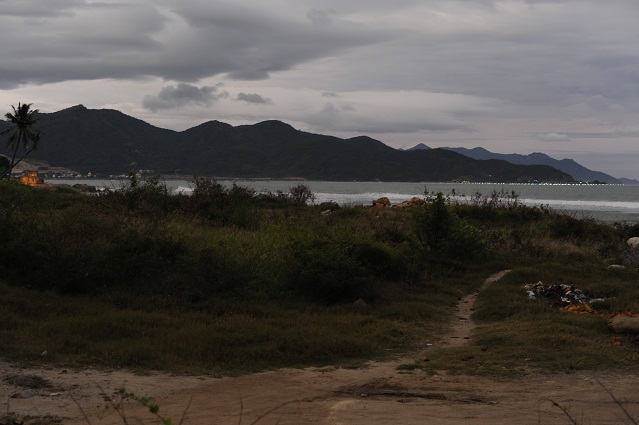 The legend of the Japanese Bridge in Hoi An

According to the legend, there once lived an enormous monster called Cu that had its head in India, its tail in Japan and its body in Vietnam. Whenever the monster moved, terrible disasters befell Vietnam. The bridge was built on the monster’s weakest point and killed it, but the people of Hoi An took pity and built a small temple on the bridge to pray for its soul.

The legend of Halong Bay

Halong translates as “where the dragon descends into the sea”, and legend claims the islands of Halong Bay were created by a great dragon from the mountains. As it charged towards the coast, its flailing tail gouged out valleys and crevasses. When it finally plunged into the sea, the area filled with water, leaving only the pinnacles visible.

Apparently, Halong Bay also has its own Loch Ness monster! “Sailors have often reported sightings of a mysterious marine creature of gargantuan proportions known as the tarasque. The more paranoid elements of the military suspect it’s an imperialist spy submarine, while eccentric travellers believe they have discovered Vietnam’s version of the Loch Ness monster. Meanwhile, the monster – or whatever it is – continues to haunt Halong Bay, unfettered by the marine police, Vietnam Tourism and the immigration authorities. Enterprising Vietnamese boat owners have made a cottage industry out of the creature, offering cash-laden tourists the chance to rent a junk and pursue the tarasque before it gets bored and swims away.”

The legend of the turtle of Hoan Kiem Lake in Hanoi

In the mid-15th century, Heaven sent Emperor Le Thai To (Le Loi) a magical sword to help him drive the Chinese out of Vietnam. One day, after the war, he ran into a giant golden turtle swimming on the surface of the lake. The creature grabbed the sword and disappeared into the depths. Since that time, the lake has been known as Ho Hoan Kiem (Lake of the Restored Sword) because the turtle restored the sword to its divine owners.

Here is the Hoan Kiem Lake 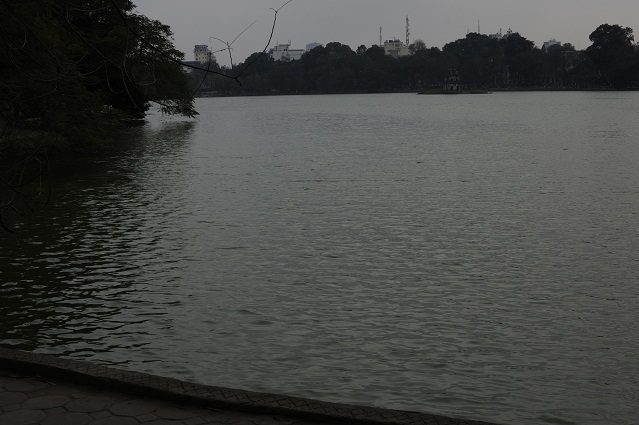 There is actually a huge turtle still living inside this lake which is more than a hundred years old, if not more! It is called Cu Rua and is 200kgs and 2m long. It was captured in April 2011 to give it medical treatment for lesions caused by pollution and apparently that was a special day that day in Hanoi, many people gathering to watch it being taken out of the water.

On my last day in Vietnam, I went to the Ngoc Son Temple located on the lake to see one legendary turtle who also lived in the lake before. It died in 1968 and is 250 kgs and 2.1m long!

There are only three other freshwater turtles of the genus Rafetus swinhoei still living today, one in a lake outside Hanoi and two others in China.

The legend of the Tay Ho (West Lake) in Hanoi

Tay Ho is the largest lake of Hanoi, with a circumference of about 13km.
Two legends explain the origins of Tay Ho, which is also known as the Lake of Mist and the Big Lake. According to one legend, Tay Ho was created when the Dragon King drowned an evil nine-tailed fox in his hair, in a forest on this site. Another legend relates that in the 11th century a Vietnamese Buddhist monk, Khong Lo, rendered a great service to the emperor of China, who rewarded him with a vast quantity of bronze. The monk cast the bronze into a huge bell, the sound of which could be heard all the way to China, where the Golden Buffalo Calf, mistaking the ringing for its mother’s call, ran southward, trampling on the site and turning it into a lake.

Here is the Ta Ho lake.

The legend of widow’s island

This is apparently the legend about a tiny island in the middle of the Ba Be Lakes. I didn’t go to that place, but I really liked this legend. The Tay people believe that what is a lake today was once farmland, and in the middle was a village called Nam Mau.

One day, Nam Mau residents found a buffalo wandering in the nearby forest. They caught it, killed it, and shared the meat. However, the didn’t share any with a certain lonely old widow.

Unfortunately for the villagers, this wasn’t just any old buffalo. It belonged to the river ghost. When the buffalo failed to return home, the ghost went to the village disguised as a beggar. He asked the villagers for something to eat, but they refused to share their buffalo buffet and ran the poor beggar off. Only the widow was kind to him and gave him some food and a place to stay for the night.

That night the beggar told the widow to take some rice husks and sprinkle them on the ground around her house. Later in the evening, it started to rain and then a flood came. The villagers all drowned, and the flood washed away their homes and farms, thus creating the Ba Be Lakes. Only the widows’s house remained: it’s now Po Gia Mai (Widow’s Island).