We took the bus of 8.30am to Mandalay, and saw all the way hills without trees, or with trees with signs on them in Burmese. I really wonder what these signs mean. Is it to mark ownership or to mark which tree will be cut next or not? You win a postcard if you find out! 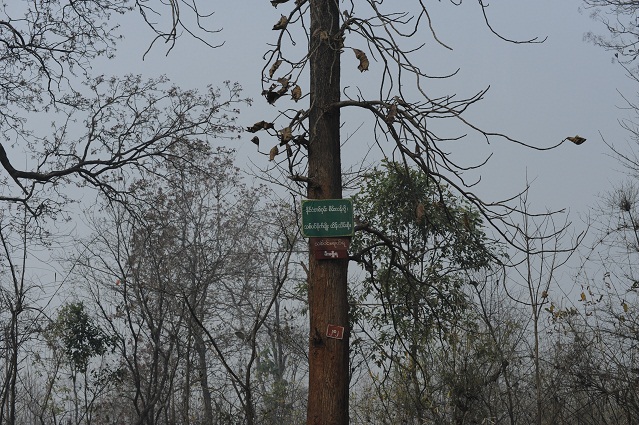 We also saw parts of the pipe getting constructed again. It is all over the place and they seem to be working really fast to build it, quite impressive. 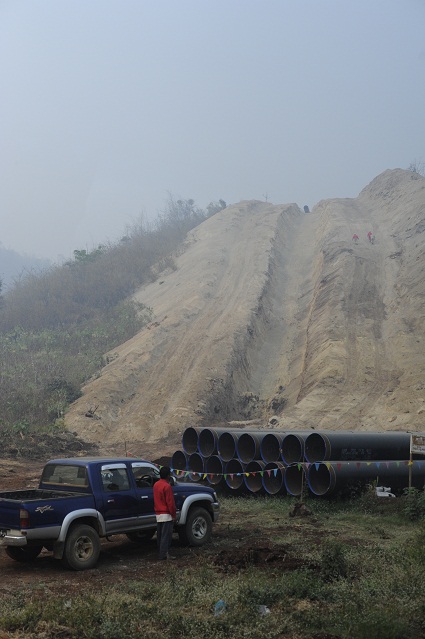 We arrived in Mandalay around 1pm and checked in the hotel where we had stayed previously. We went to some internet café, spending one hour to open the mailbox and sending 5 emails. Then we booked an hotel in Bagan by phone. Nearby I saw a woman preparing some thanakha. Women make it by pressing some specific wood on a stone and adding a bit of water to it. Only the outside of the tree (écorce) is used to make the thanakha. She put some of my face. It is indeed really refreshing! 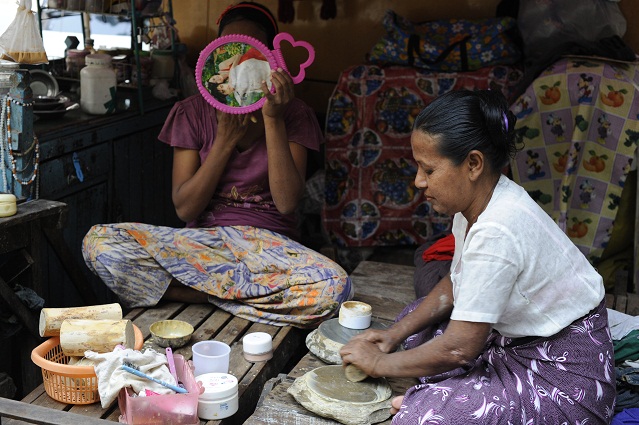 Then we went for some food at the Nepali restaurant nearby and that was it. My stomach was still messed up, so I was not eating much and had few energy for anything else. At the restaurant, we ran into the Australian older couple we had met previously in Yangoon and had a chat with them. They had been to Mandalay too and then Pyin O Lwin. They were also disappointed about Burma, because of the deforestation, the rise in prices for a quality remaining poor, the low level of hygiene in the food preparation, and a general feeling of not feeling “waou” finally compared to all the great things we had heard about Burma before to go. We joked about leaving the country earlier than planned…something that had never crossed my mind while I was in Cambodia, Lao or Vietnam. But no, let’s give Burma a chance, and stay a month as planned. So we bought our tickets for the slow boat going to Bagan the next day. It only goes on Wednesdays and Sundays so we were really happy to manage to take it.

We got a pick-up and were at the boat at 5am. It was still dark when we boarded it. One guy pointed us to the plastic chairs in one corner, where a few westerners were already sitting, but we wanted to be with the locals, so we kept walking on the deck and found a spot where to sit on the floor with Burmese people. A lot of people had already arrived and settled. Some were sleeping, some were eating, some were chatting. Here is how life on the boat looked before it had even departed. 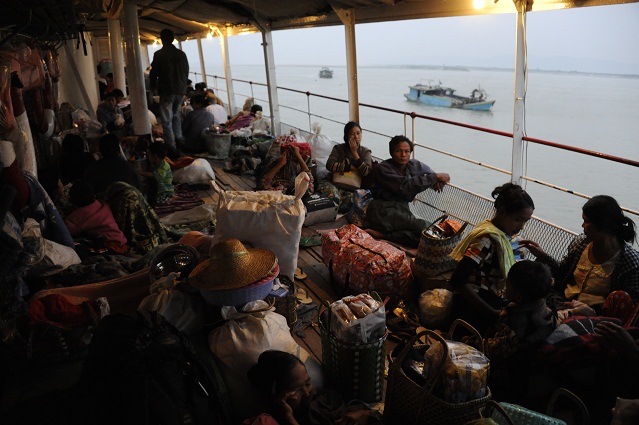 The boat left Mandalay at 5.30am and we passed in front of the Sagaing Hill. In the sunrise, it was beautiful to watch with all the payas on it. 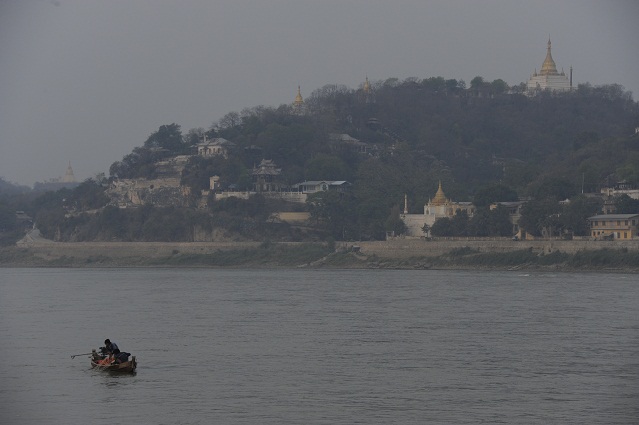 On the other side, the sun was rising above one paya. 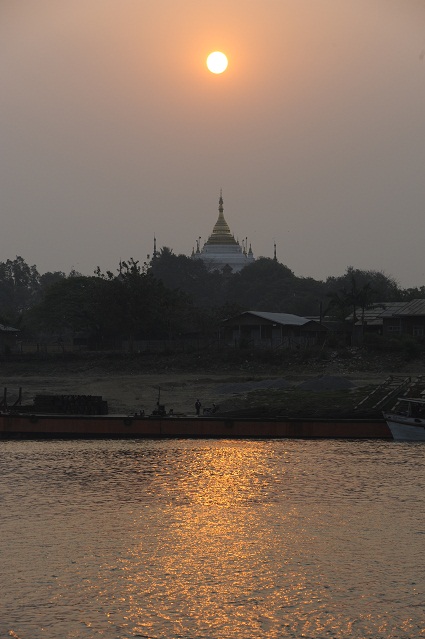 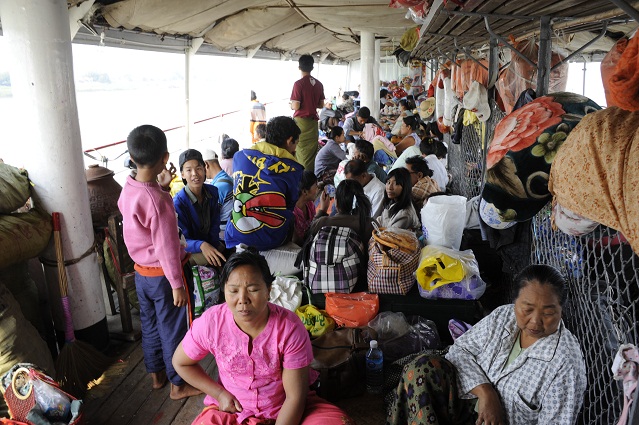 Where we were seating were 2 old Burmese sisters, who were still sleeping at first. During the day, we communicated with them with hand signs. They were really kind to us, lending us a pillow for a nap, offering us some food, some drinks. There was also a little girl who was really cute and fun, about 2 years old, and playing with my bag at first. She was the daughter of the couple running the boat’s snack&bar. 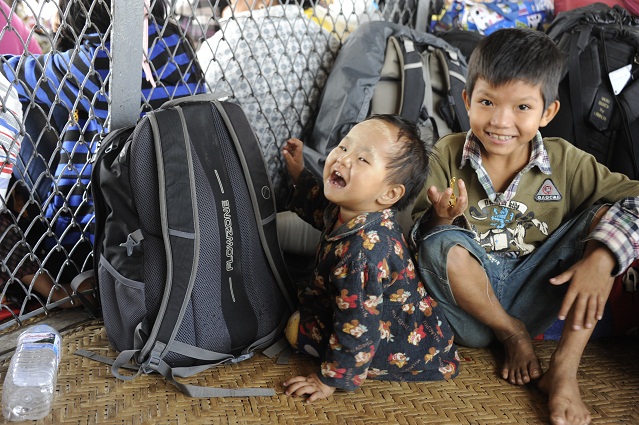 There were about 7 kids altogether who kept playing all day around us, funny kids.The boat during the day kept stopping at various small places to drop people and take some others onboard. Onshore people came onboard to sell some fruits and food. It was also possible to get down to go buy things directly on shore during these stops. 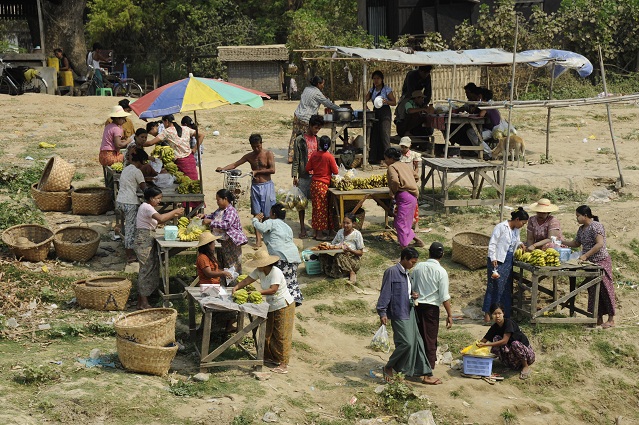 One place that was really amazing was one where there was just sand, nothing else, very close to Bagan. Men driving ox carts arrived to pick up people. It was almost surreal. 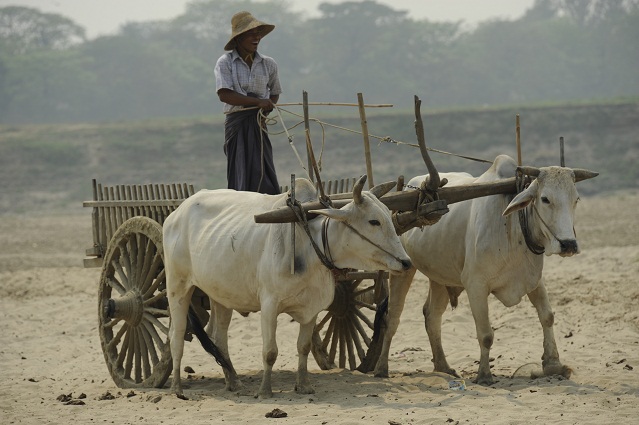 Nearby was also a boat loaded with cows which was crossing the river. 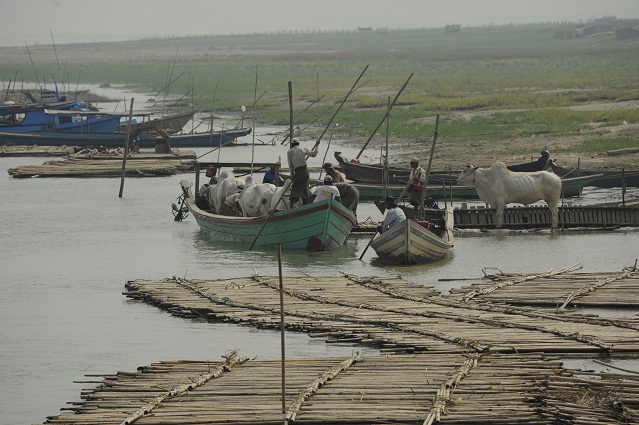 We saw the sunset from the boat, although as we were going from Mandalay to Bagan, so from East to West, it wasn’t in front of us but in our back. 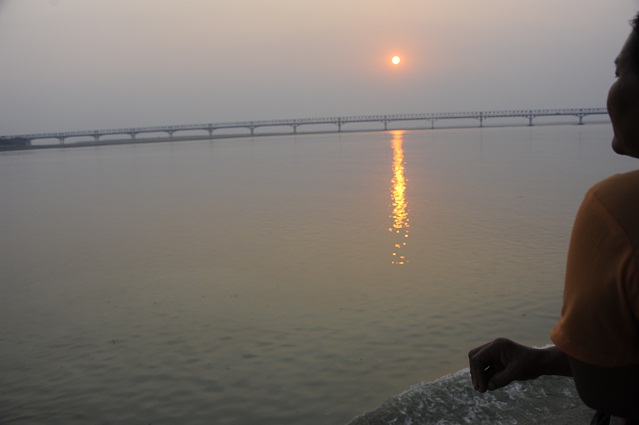 We arrived around 7.30pm in Nyang U, which is the entry point to Bagan.Bagan is actually made of 3 areas, Nyang U, then Old Bagan then New Bagan. The government expelled the people of the “Old Bagan” to the “New Bagan” a few years ago in order to make it a site-only area with only a few very expensive hotels there. The weather was really different from the rest of Burma, as Bagan is a desert. It is a torride dry hot weather where the wind blows the sand all around and you feel the air of the desert each time you breathe in.

On the boat we had met a French woman in her sixties who shared a taxi with us to go to some hotels in New Bagan. She was a funny woman as she was only relying on what her teacher of Burmese language in Paris had told her about Burma before she left, although he had not been to Burma for 7 years! Risky way of travelling, but adventurous for sure. We arrived at the Kumudara Hotel, our hotel with swimming pool we had booked online to treat ourselves for a few days, the most expensive room we paid so far in the trip, 30 dollars. Great place!

We had breakfast at 7am and rented some bikes. As soon as we started cycling, there were temples around us making us dizzy and wondering where to look! 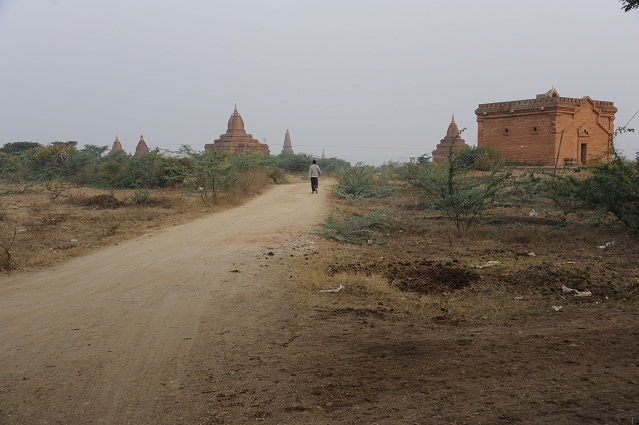 Stopping all the time to take pictures of those wonderful temples, each unique in its own way, we went slowly to the largest temple located in Old Bagan called Pahto Ananda. It was supposed to be crowded and full of touts, but it was quiet and empty. There were 4 Golden Buddhas inside, and it was quite beautiful from the outside. 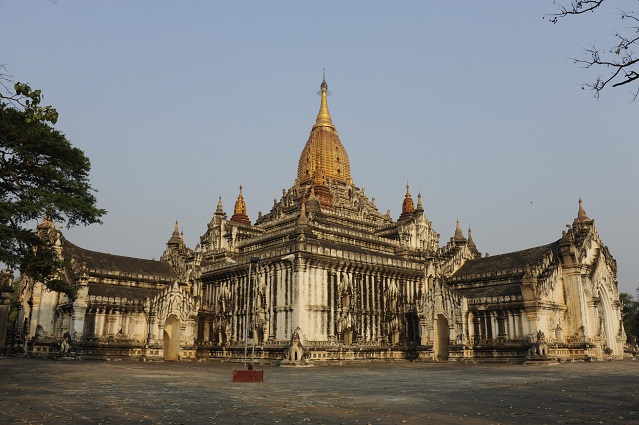 After that temple, we went to another one from which we had a beautiful view from above to see the temples around. This is what makes Bagan special, the incredible number of temples you can see in the surroundings from the top of another temple. 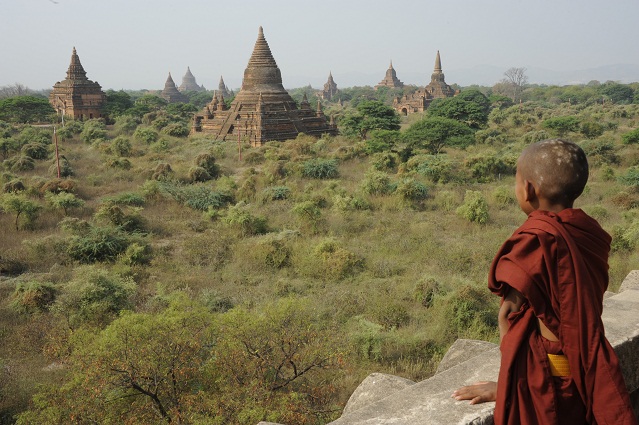 We cycled to the Mahabodhi temple nearby, an Indian temple after and then went for some lunch in front of the Art Museum. We talked a bit with the shop owner. He told us with a lot of enthusiasm about the Water Festival taking place from 13th to 17th April, and how everyone just throws water to one another, but also how they were making jokes to each other friends by putting some salt instead of other things in some local pastries they prepare for this festival. It was great to hear a Burmese talk about his local traditions and year-event for which he cares. We asked him if he could recommend us a small and quiet temple nearby where we could have a nap after lunch, and he told us about the xxx temple. We cycled there, it was 1pm and the sun was burning. After 5 minutes cycling we got there.

We went behind it in its shadow and slept there until 3.30pm. After such a great nap, I strongly believe that Bagan temples have been built in order to give a great nap to people, as the stones really perfectly fit the body shape. I had one of my best nap ever! 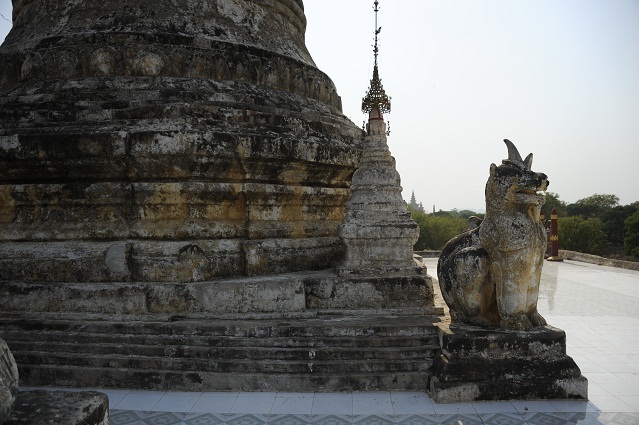 We also had a great view over the valley. Waiting in the shadow of a temple, sleeping on its stones, soaking up the atmosphere of Bagan with a great view, that was perfect. After that, we cycled around, passing some ox carts also giving some cool atmosphere to the place. 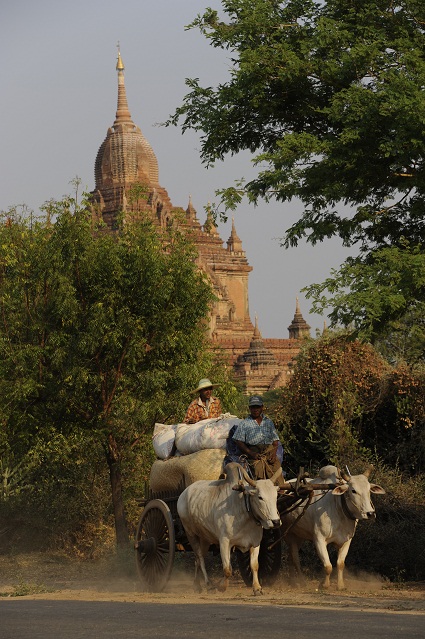 We arrived at a beautiful temple called Pahto Sulamani. 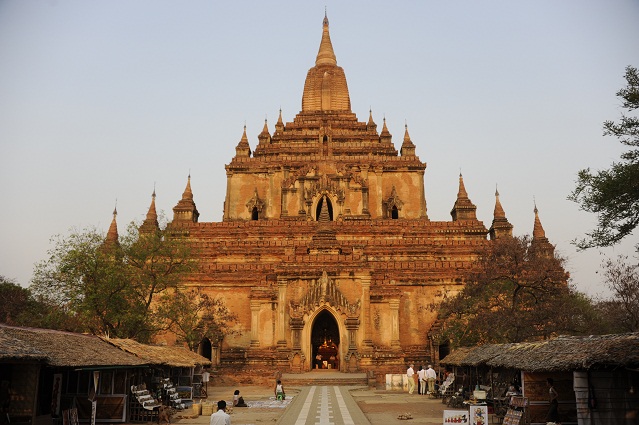 I went inside to see the mural paintings. Few temples have beautiful murals, and that one was one of the few to have interesting ones. 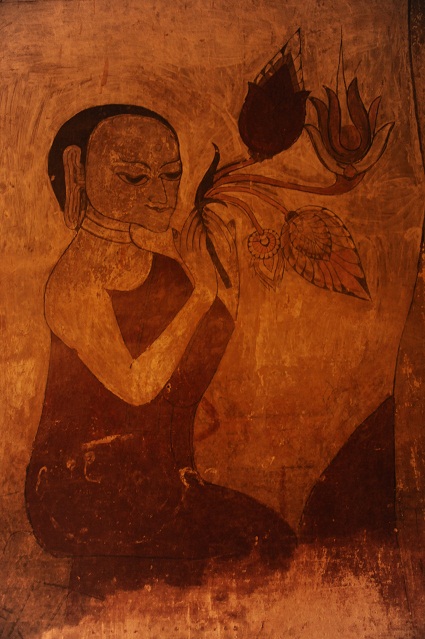 Then we watched the sunset from another temple whose name I forgot. The view was gorgeous and we stayed there until twilight. 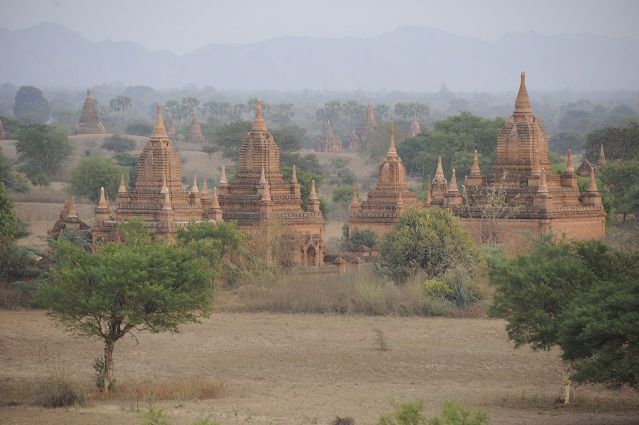 We cycled back in small sand tracks, and got a bit lost. The night was falling, and we had to push the bikes in the sand as we couldn’t pedal in those tracks. After a lot of pushing in the darkness, not being sure where we were heading, we finally arrived at the main road and could cycle again. It took us about 40 more minutes to arrive at our hotel, after a quick stop at the nearby shop. We had dinner there and went to bed quite early, exhausted!

After 2 weeks in Burma going here and there, this was our day off, the holiday within the holiday, a day to just stop and do nothing. Plus Bagan was really really hot. It is actually the hottest place in Burma, so quite tough to find the energy to move around all day. I spent the morning at the swimming pool. I had it just for me, and could crawl back and forth with no one around, and a fantastic view over the temples nearby. Awsome! 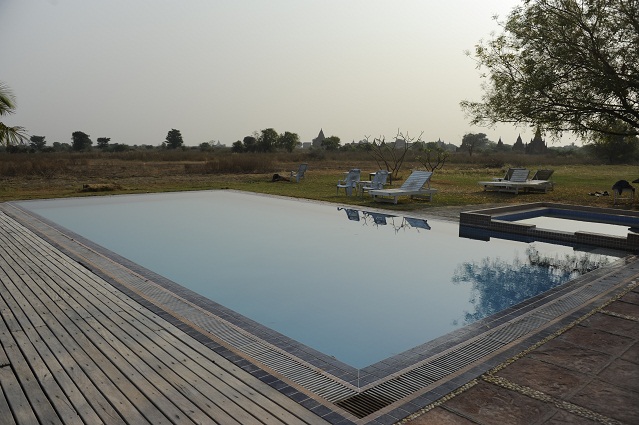 After the afternoon, I prepared some posts for the blog that I would post later once I would have a good wifi connexion. We also watched some movies: Pirates of the Caribbean 1, and 2 others, one with Jodie Foster where she plays a writer of an adventure and the characters of her book become alive and ask her for her help so she leaves the desk she never lived and goes travelling to reach a remote island. What is the name of that movie? The other one was a French movie taking place in Marseille, a police movie, the policeman had to investigate an ugly crime where the guy had been cut in very small pieces, and had a osteopath taking care of him who knew also how to heal cats and the crime was linked to some vampire stories in Hungary. What is the name of that movie? Win a postcard for each if you find out, send me an email! 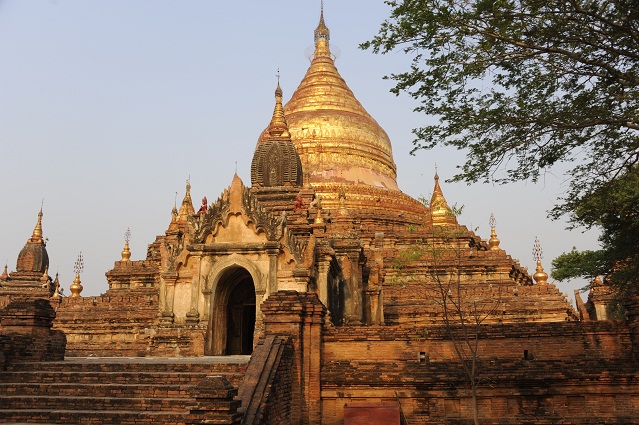 We climbed the stairs and walked around, waiting for the sun to rise and enjoying the valley at down, still wrapped in a beautiful fog. . 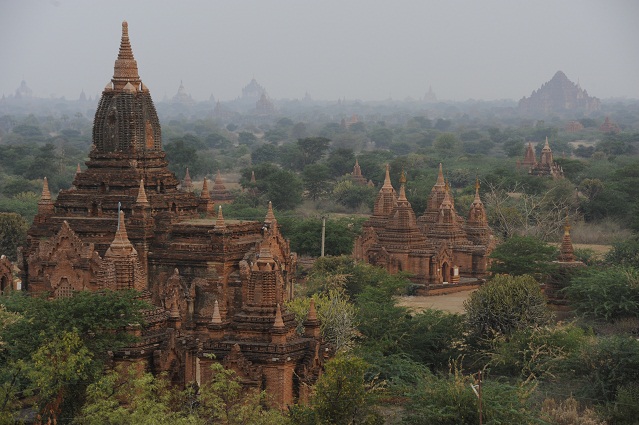 Here was the sun rising. 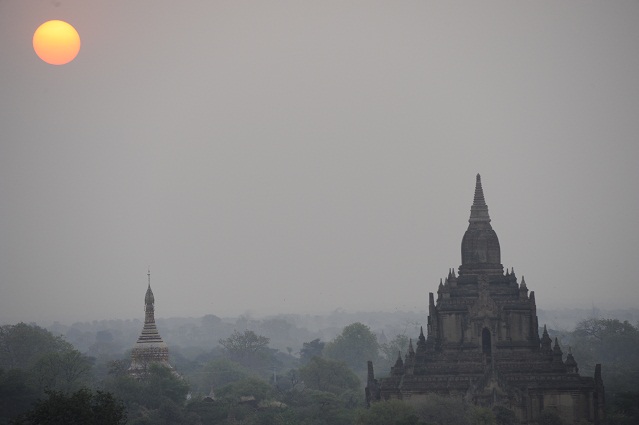 We stayed a bit more, enjoying the atmosphere, and the sounds of the valley, the cicadas, the birds, the wind in the nearby trees, then we cycled back to the hotel to get some breakfast. After that another day of rest, starting with a good workout at the swimming pool again for me in the morning and continuing writing some articles in the afternoon.

We went again to the same temple around 5pm, to enjoy the sunset from there and that was it for the day. Bagan was so hot we just couldn’t find the energy for more activity. 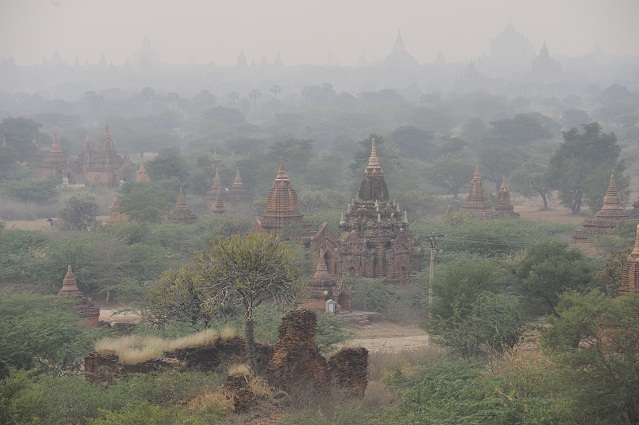 Tomorrow, off to Kalaw with a bus picking us up at 4am at the hotel! Ouch!