We arrived in the early morning in Yangoon, around 5am and took a taxi to an hotel. We slept quite a lot in the morning. In the afternoon, we went to the travel agents close to the railstation and bought bus tickets to Mawlamyine, in the South-East of Burma, for the next day.

Then we went to the 20th floor of the Sakura Tower and enjoyed a great view above Yangoon. It is a really beautiful city when you look at it from upstairs.

Here is the East Central Yangoon

And the West Central Yangoon

While getting down in the lift, we met a Burmese guy and his cousin and shared a taxi to the Shwedagon Paya. We wanted to have a look at the nearby Paya which was nice too.

We went for dinner with them, and they took us to a Chinese vegetarian restaurant where the tofu is made to taste like meat. A strange concept to us, a bit weird, and the result is not that good.

On the way back to the hotel, there were some people purchasing tickets to play loto at a specialised shop. As in many countries in the world, a lot of people play and are dreaming of winning the jackpot. 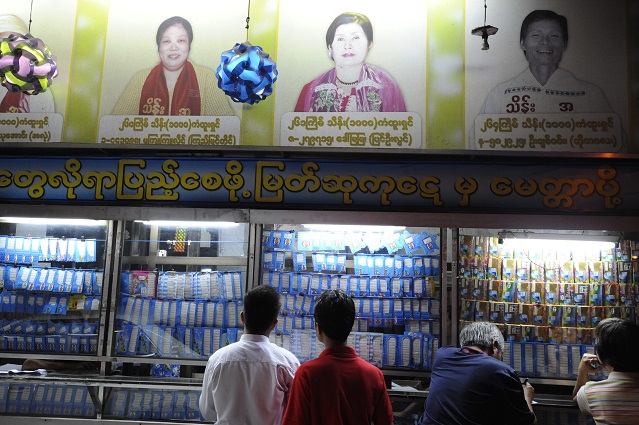 We took the bus of 6am to Mawlamyine. It was the most comfortable bus we had had in Burma so far and had some funny curtains.

While leaving Yangoon, we passed the Press Department street, where men were putting up pages of newspapers together.

We arrived in Mawlamyine in 6 hours instead of the 8 to 10 hours journey the Lonely Planet had mentioned. Awsome! Great surprise when it is in that order. We got into a blue pick-up taxi, checked in some hotel and then walked to a hill to enjoy the sunset from the temple there. Another Golden Paya to us… 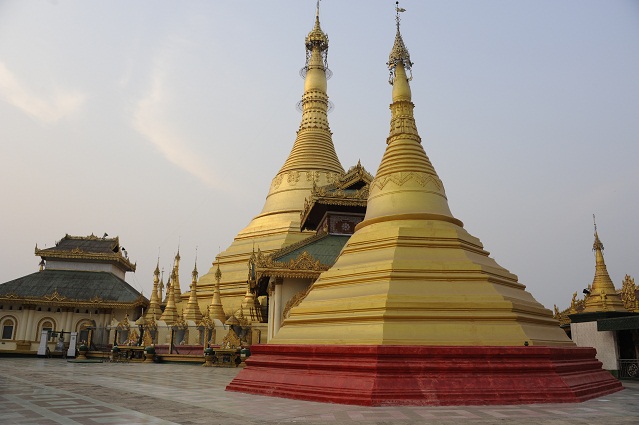 But still a place where Burmese people also come, and to pray.

Sunset from the Paya.

After sunset, we walked near the river and had some barbecue skewers with fresh draft beer, and some chocolate pastries in a bakery.

And no, this year, for the first time since a few years, I didn’t trick anyone, because the Internet was just so bad that it was impossible to play tricks. It made me a bit sad as the 1st April is really my favourite day of the year, but don’t worry…That will be for next year!

We took a minitaxi to the boat station and boarded a local boat to go visit the Ogre Island located in front of Mawlamyine. It was an awesome experience, as the boat was really messy, with young chicken in cardboard boxes in the middle, women around with their belongings, men and motorbikes on top on the roof, and us, 2 tourists only. 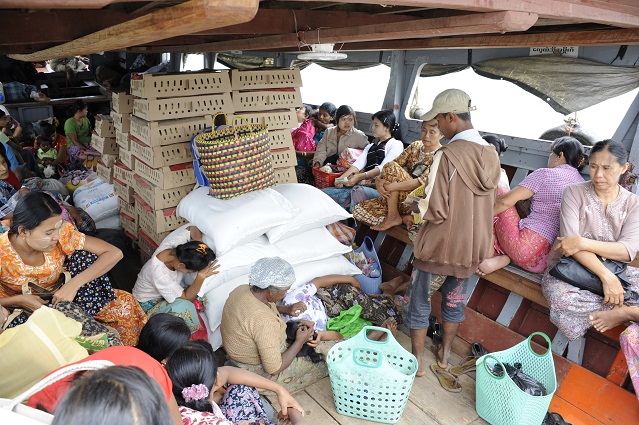 There are moments when you travel, and you could be anywhere in the world, and you don’t feel like you are in a specific country. I really liked taking this slow boat because each second reminded me that I was in Burma and nowhere else.

The landscape to get there was quite flat and the day was quite foggy.

There were some cool seagulls though, apparently called mire crow or black-headed gull.

The boat had a problem, and it waited until another boat came to push it back to starting point. All passengers and goods transferred there to another boat on which passengers had already boarded.

We arrived on Ogre Island around noon. Tourists are allowed to stay on the island only until 3pm (That’s the time when the ogre wakes up and looks for fresh humans to eat…Too risky for not native inlanders to deal with). We didn’t have much time so decided not to go to the center of the island but to stay around. We had some lunch, then a motorbike driver offered us to take us both on 2 bikes for a 2-hour tour of the island. We accepted, and here was some of the landscape there with water buffalos grazing.

The motorbike drivers took us to a house making all sorts of hats. 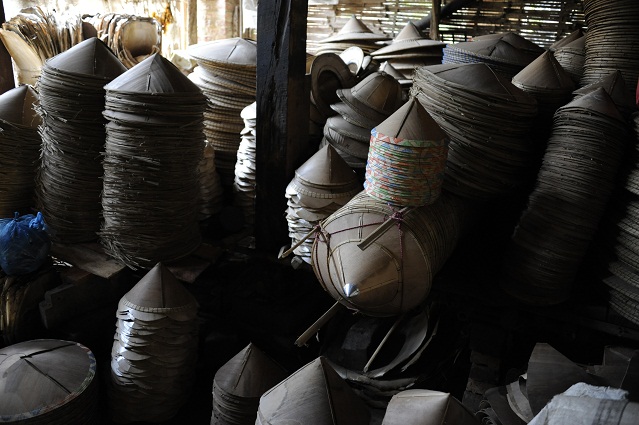 There were 3 kids there who were really cute.

We drove around and passed lots of traditional villages and houses. We asked to stop at some point to take some pictures and go chat a bit with the people living there. The place was really authentic and gorgeous.

The people there were incredibly generous and offered us a branch of a few green mangoes and made one of the coconut of their tree fall to offer it to us to drink.

The two women on the left were the ones welcoming us, while the 2 men are our motorbike drivers who took us around and were here opening the coconut to release its water for us to drink. 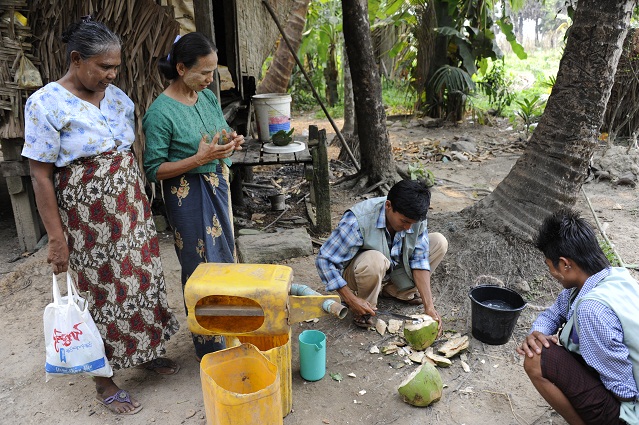 On the way back, we passed some village where the houses were quite big and beautiful and the motorbike driver explained us that in this village lived a lot of rich people who had gone working in Thailand and were making a lot of money.

Before to leave the island, we stopped for toilets in a house in front of the pier and that house was incredible. It had a lot of cats, which is quite unusual in Asia.

The woman was ironing with a really old iron that is used in most of Europe only as a decoration object nowadays. 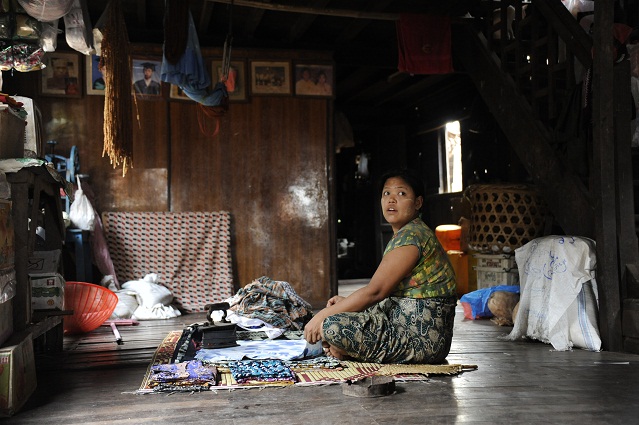 On the way back, there were some nice colours on the sea for sunset. 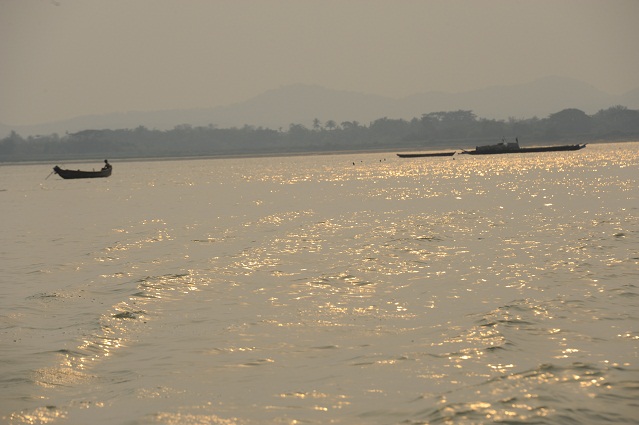 The transfer from the boat to the pier was quite messy and funny again.

On the way back from the pier to the centre of town, we saw a chimney-tree! 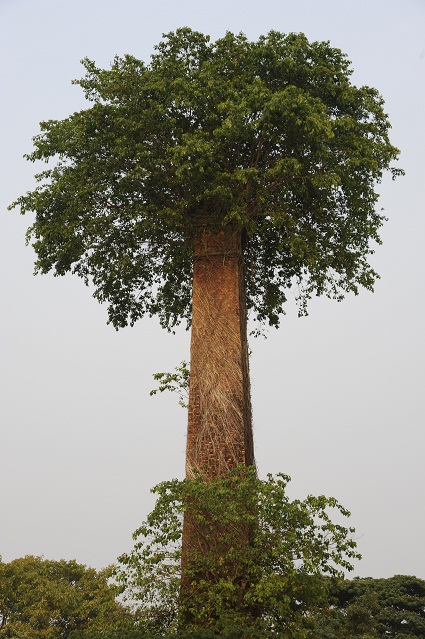 We had some delicious barbecue again at the same place as the day before. While walking back, we passed the National League for Democracy headquarter of Mawlamyine. NLD is the political party of Ang San Suu Kyi. Today, people were voting for the party they wanted to give seats to in the Parliament. There are about 800 seats blocked by the  government and the vote was only about 48 seats. A lot of people were in the streets in a very cheerful mood, wearing NLD T-shirts.

We went inside the building and they were writing down the results on a board. 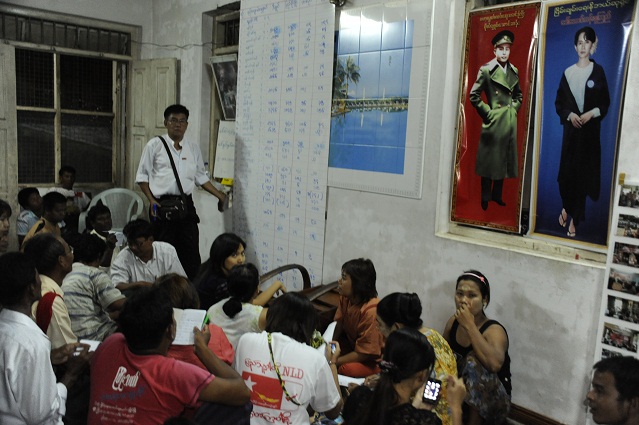 We came back to the hotel, and the guys of the hotel were in front of the television watching the results. The NLD won 44 out of 48 seats. While it will not make a real impact, considered the number of seats owned by other parties at the parliament, it was still a turn for Burma. People can today go in the streets and claim which party they support without fearing to be taken to jail. This is a huge change in the atmosphere of the country.

Ang San Suu Kyi is giving them a lot of hope. It is beautiful to be a witness of that time and to see an entire population being so enthrilled with voting results and one political personality like Ang San Suu Kyi being so much adored.

Tomorrow, off to Hpa An!