I missed the flying foxes flying away at dawn that Chrissy saw, but at least this time, I managed to catch the sunrise! 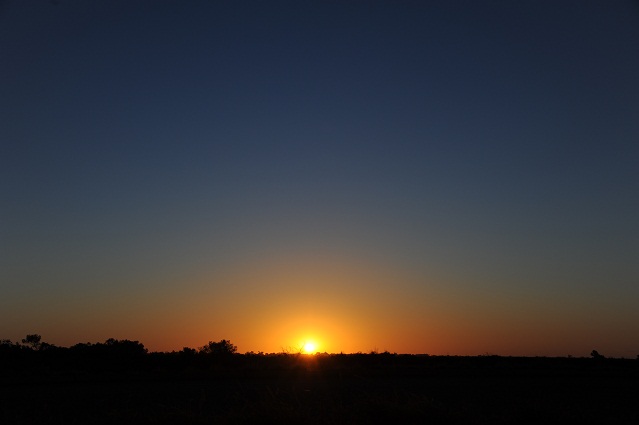 Here is the place where we had stayed for the night, quiet and green, with beautiful trees.

There were really cool birds coming in the trees around our rest area. A lot of pair of white cockedoos, like this one. 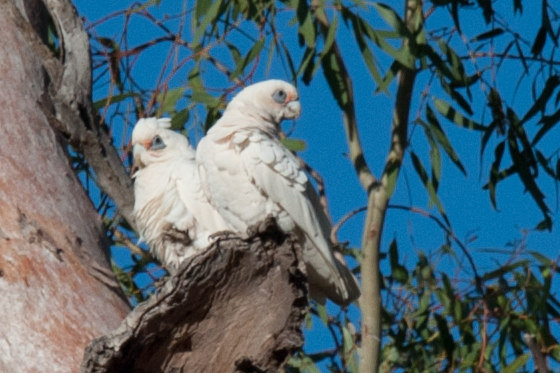 A few pairs of pink ones, like this one.

I saw only 2 pairs of this green and blue/yellow pair of birds.

The crow was here, as any morning. Crows in Australia make a very strange sound. They seem to be repeating the French alphabet when they shout, it sounds like “A, E, I, O, UUUUU”. Very strange. 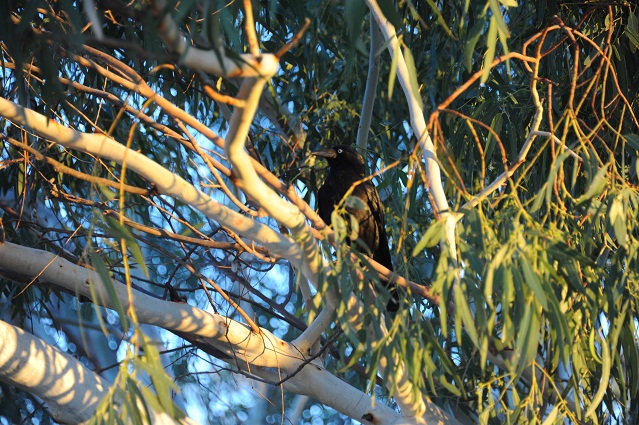 There was also this black and white bird going around that we kept seeing every day, mostly in the morning, wherever we went.

And finally that other bird, that I was seeing for the first time. 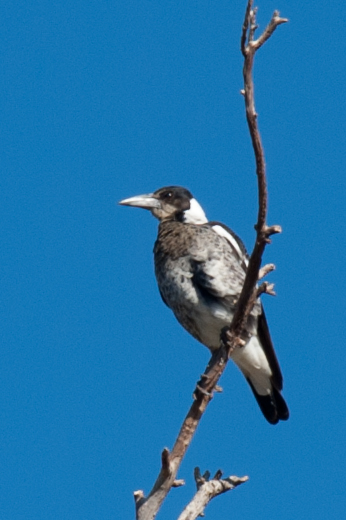 Here is the map of the bit of the road we drove that day, between Minilya and Coral Bay. 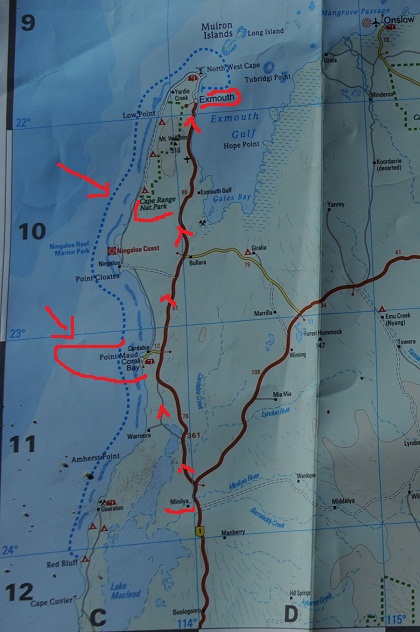 For a part of it, we went off track, on a corrugated road. Here is the landscape we had around us.

In the distance, there was some shapes but we were not sure what. 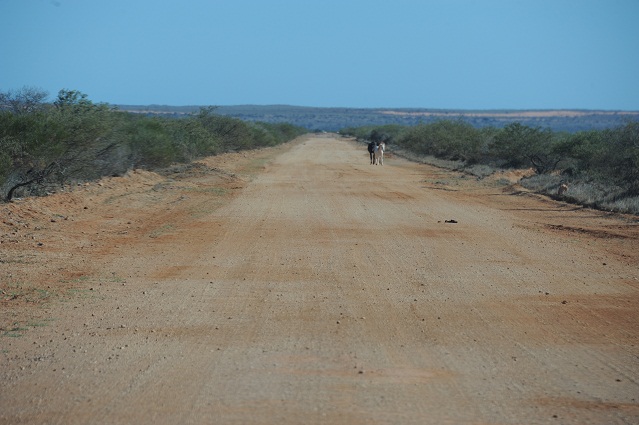 We drove a bit closer, and then stopped the car and waited for these shapes to come to us. It was horses, wild horses. Their head was really down when they were walking. They seemed to be really tired, maybe hungry or thirsty.

They came to the window of the car and stopped, not too shy, or as if they were expecting something.

I felt I would really have loved to give them some water, I was worried about them. but suddenly they trotted away, and were small shapes in the distance again, behind us this time, as quickly as they had appeared. I was happy I had taken photos, or else I would think I had just dreamed that day. This is the magic of Western Australia, this kind of encounter, this incredible nature every day. I feel like an astronaut on the moon here. Although roads have been built in the last 40 years, there are still not many people living here. Only 23 million people live in Australia, only 2.3 million in Western Australia, and 1.7 million of them in Perth! It is the new Wild Wild West, an incredible piece of land to travel!

Looking left, we saw some emeus again in the wild. 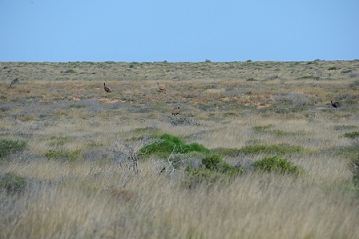 We arrived in Coral Bay, checked out the Information Centre. There I bought a mask and a snorkel. Then we parked our van in one of the two camping sites. Had some lunch, and then went to the beach. 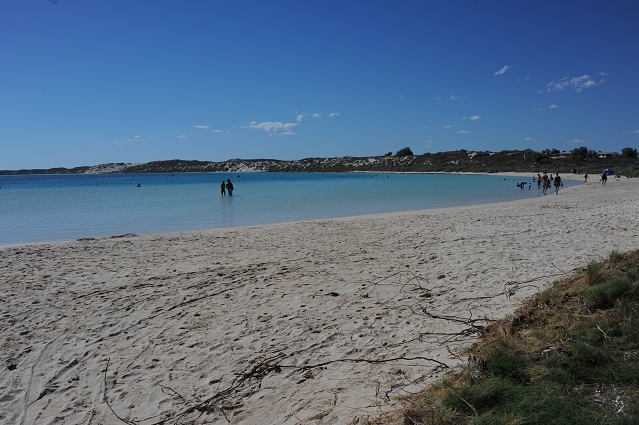 With Michael, we walked a bit on this stretch of beach.

Once we saw a “5 miles” sign in the water, we swam until there, and let ourselves be drifted by the gentle current towards the main beach, seeing some nice corals and fishes.

We stayed until sunset. There was a nice bird fishing. 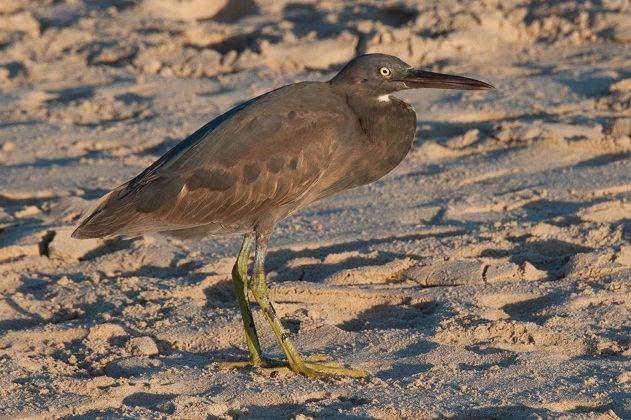 The sunset over the sea was quite nice, although not the most colourful we saw. Uhm, could do better! At the campsite, we met some Australians who were eating at the table near us, who showed us some photos of the fishes they had caught on their boat. They had taken 3 months off to stay in Coral Bay, and go fish. They told us that we should check out a huge fish named “Murphy” at the jetty so we decided to check him out the next morning. 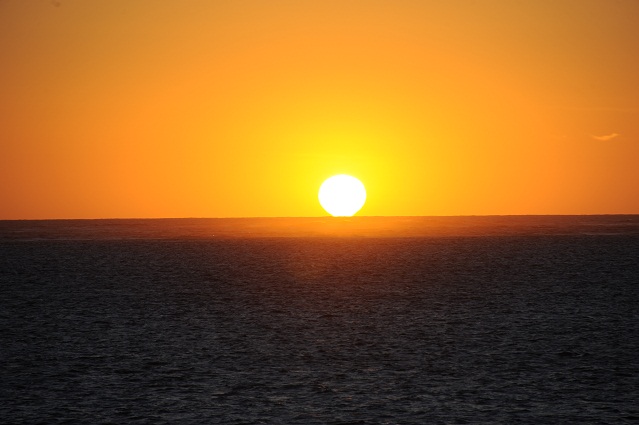 I got a cold that night at the Coral Bay campsite. A cold I was going to keep for weeks, and that was going to prevent me from diving for an entire week a month later! Grrrrr!!!! But that I didn’t know yet…So here I was, waking up, with my “amygdales” hurting like hell. Nothing in the nose or the ears, just the throat…for a start. I should have targeted that cold strongly immediately to completely get rid of it quickly, but took it a bit too easy, stupidly. Beeeeee…

In the morning, we went on the beach on the other side, to try to spot some sharks but didn’t see any. Nevermind, the beach was pretty beautiful still.

Then we drove to the jetty and walked to it. 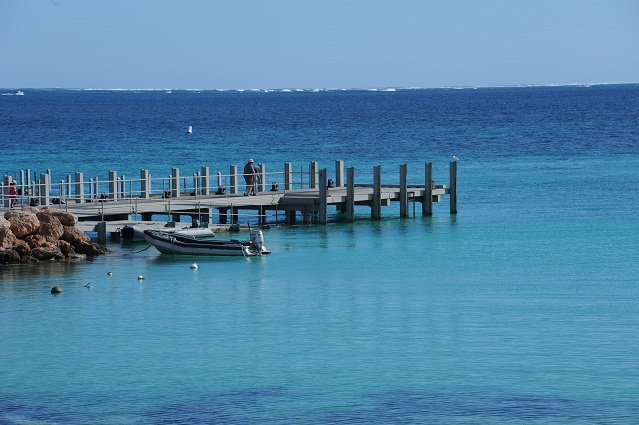 We saw Murphy, the huge fish, cruising slowly under the jetty. Sad that it wasn’t allowed to swim with him!

Here are some cars of the parking. Most of them are 4 while drive high clearance cars, and this is the best to have in order to be able to drive everywhere around Western Australia. But they are quite a bit expensive.

We took the road again, going to Exmouth. The landscape was quite flat around.

There were a lot of termite mounts all around though. 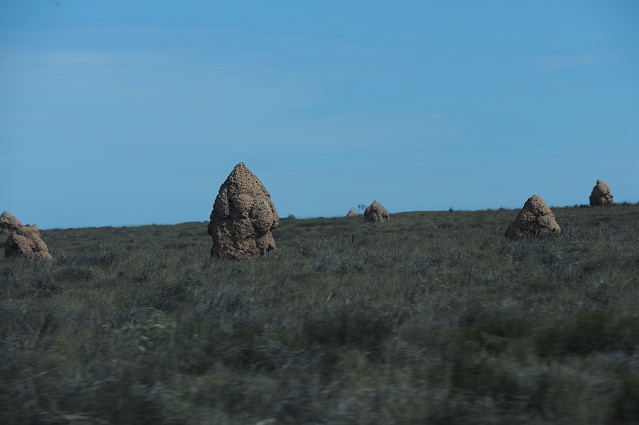 We arrived there around noon, and had some lunch and then the guys went around asking about other dives and scenic flights. At 3pm, Chrissy dropped Michael and me at the dive shop, and went to the Cape Range National Park. We were ready for the Pier Dive, and I was glad that my cold wasn’t bad to the point that I could not dive. Here was the instructor explaining about the dive: 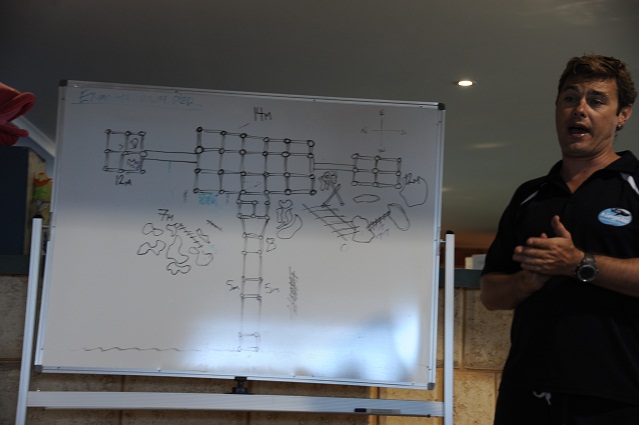 We were 15 people in total, and went with their dive minibus.

The Pier dive is on Defense territory and only one company gets the diving licence every year! When we approached, we got closer to these mysterious towers. They are used to communicate to submarines that can be hundreds of kilometres away.

Here was the sign while we were approaching the site.

We had to stop at one checkpoint and the guard entered the minivan and checked each of our id, whether dive licence, or driving licence or passeport etc!  Then we arrived at the final gate, that one of the dive instructor went to open.

And here we were on the pier. Even the seagulls seemed to be part of some military organisation, as they were all lined up almost perfectly on the barriers! 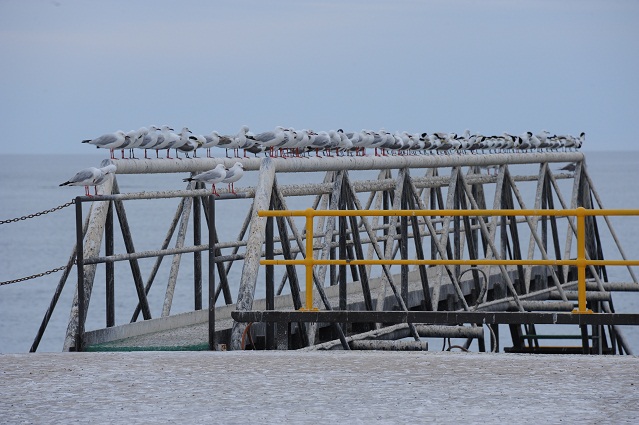 That day and night dive we did there were fantastic, the best I have done so far. We saw a grey nurse shark, and apparently it was the first time of the year they were seen, as they come back mid-May but the divers never know when exactly. There were also wobbegongs, and another shark. There was a huge fish there, it may be 100 years old. They call it the BFG, the Big Friendly Grouper. I had never seen from so close such a huge fish, it was amazing to dive with him. The pier was impressive, and going below or above its bars was something. There were tons of other kind of fishes, and also some octopus. Awsome dive.

We came back to the entrance and the minibus dropped us there. Chrissy was already waiting for us and we drove to the camping, which was close to the Cap Range National Park.

Tomorrow, let’s go swimming with the biggest fish of the world!!!