We got picked up at 7am by the tour guide Dan in a Toyota VB4500 + little caravan to transport food and put our small bag. In the car were already 7 other people: John from Manchester, England who had worked in finance before, and his girlfriend  Steph from Wales, who had worked there as a zookeeper. They had been travelling/working for 5 months in Australia with the working holiday visa and were planning to stay 12 months in total. Then were Jane and Luke from Belfast. They had been living in Australia for 4 years and were working as emergency doctors. They were now going to Asia for 2 months and then to London to live there. Then there was Maria. She was from Sweden, and had been travelling for 3 months in Australia, and was now going to work as a baby-sitter in Darwin for a few weeks. There was also Lena, from Germany, who had been working as a baby-sitter for 10 months in Sydney, with one spent on a farm nearby. She was staying a few more days in Darwin and then going to Perth, seeing a bit of Western Australia before to fly back to Germany. And the last one was John, the only Australian in the car! He was living near Sydney and working as a police officer there, but his wife family was from Darwin so they were visiting quite often there, and he had finally decided to go to see Kakadu as it is quite a highlight around Darwin. It was a nice bunch of people, everyone in their twenties or early thirties.

We started the trip by going on a cruise on Adelaide river to see the jumping crocodiles. These crocodiles are “salties”, bigger and more dangerous than “freshies”. If you fall in the river, forget about it, you are dead! They will come and swallow you within a second…

On our way to there, we saw a beautiful eagle posed on a fence.

The cruise was about an hour and we first saw Hannibal. Apparently, he is one of the oldest crocodile of the river. He is about 6 meters long, the longest one being 7 meters long.

Two girls, one on each side of the boat, were attaching some meat on a rope and swinging it above the water while the driver was telling us more about the crocodiles. One thing he pointed was that they are very careful about which crocodiles they feed, and they make sure that these crocodiles don’t rely on them. He insisted that these crocodiles are free to come and go, to approach the boat or not, and there has been no capturing or training of them.

Here is one crocodile jumping to try to catch the meat. 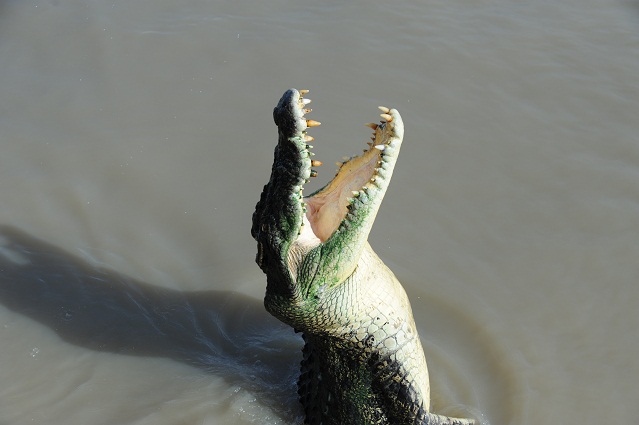 Here again. See how he his missing his left leg? Apparently, they also attack each other, and they can have quite intense fights. 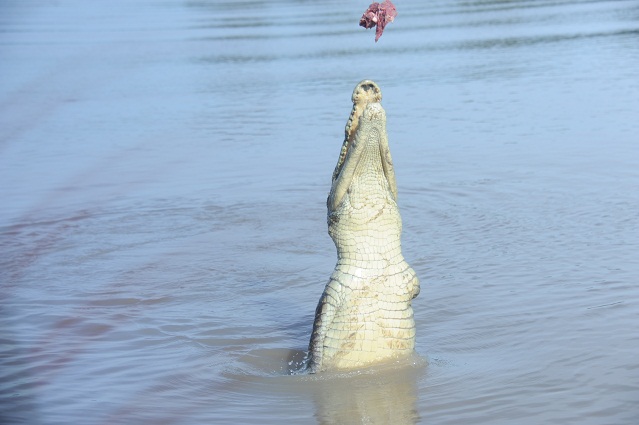 Later, the girls were also throwing little pieces of meat to eagles. These eagles are the only birds that can eat immediately what they catch while flying. Usually birds catch something and then land somewhere to eat their prey. 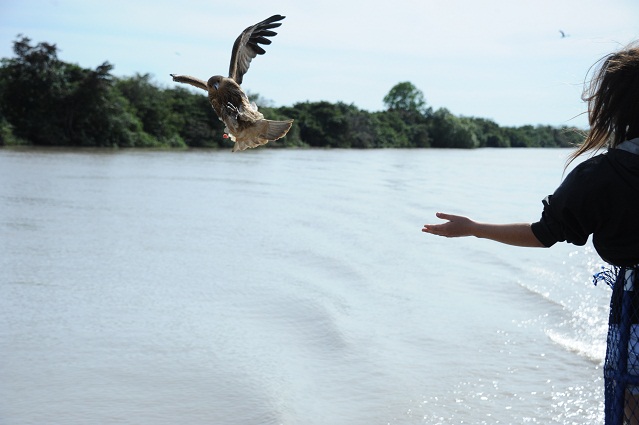 On the way to Kakadu, we saw some jabirus. Dan explained that they are usually in pair. The one with a yellow eye is the female, while the one with a black eye is the male. 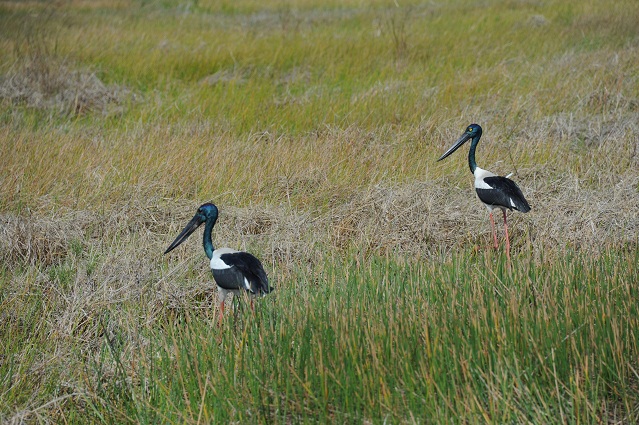 After about an hour drive, we started entering Kakadu. On the left at some point, we saw some black cackadoos flying away. These are very rare birds, seen only in a few places in Australia apparently.

We also saw some wild horses crossing the road.

These horses were really beautiful, but Dan explained that there were too many of them, and they were not native, and destroying the land, so at some point each year some hunters were hired to shoot them, tons of them. I found that quite sad. So many people like horse riding, and buying a horse in Europe is so expensive. It made me consider that if some passionate riders were coming here to capture some of these horses and train them so that they could be mounted, instead of some other people killing them, then these horses would know a nicer fate than being killed. They would not be wild anymore, but at least they would not be dead. But it is maybe naïve to think that it would be that easy to train them, or maybe their nature is to be wild and they can’t be trained. Or maybe they would prefer to be dead than to loose their freedom. Maybe. Who knows.

We arrived at this river where we stopped for some quick sandwich lunch. 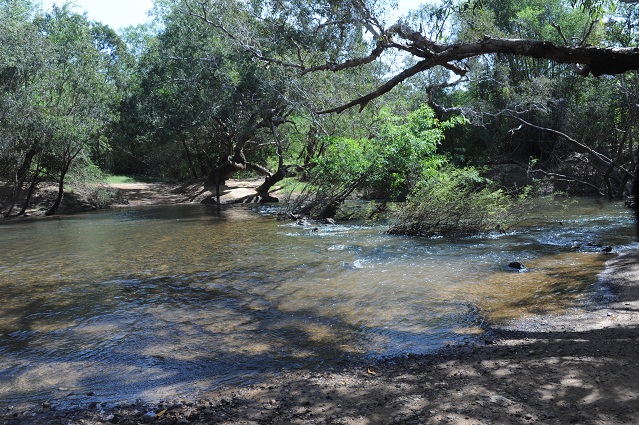 Then we drove until Gunlom camping where we parked and installed the tents. Then we climbed a bit and arrived at the top from which we had a beautiful view of the surroundings.

There we could swim in a few ponds. The water was not too cold. I still had my cold, especially my ears were getting more and more blocked, but it was a too beautiful place to not enjoy it and swim there, and in the next places we went on that 3-day trip.

Here is the view from the bottom one. Not bad… 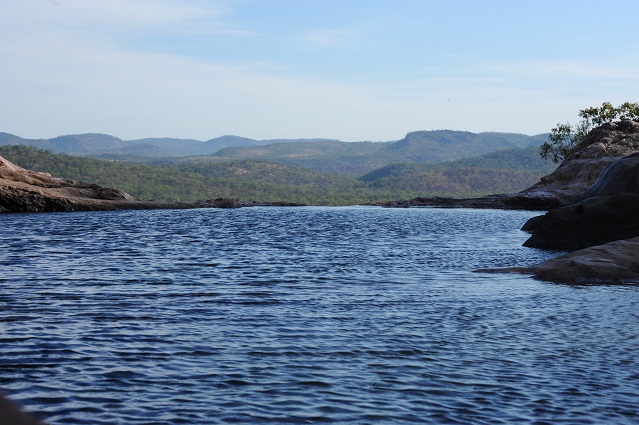 Here is the waterfall, which falls into another natural swimming pool, close to our camping ground.

After this good swim, we watched the sunset from the top which was gorgeous as always in Australia!

We came back to the campground, made a fire, had a great meal, played (or tried to play) some didgeridoo, and listened to the great stories that Dan told us. He was a young guy in his thirties, a pure Australian, huge fan of the outback. He had lived near Adelaide as a kid, had learned surfing when he was 4, had learned about the bush directly from aboriginals for who he had a huge understanding and respect, and had been a guide at Uluru in Alice Spring and then now in Kakadu. He really was a well of knowledge, and knew how to tell lots of anecdotes about other tourist trips he had done which made us laugh a lot. Awsome guide, the best we could have had!

We woke up quite early, had some breakfast. Dan was using a really cool coffee machine similar to the ones used in Italy, but a bit lighter to carry and maybe more adapted to boiling on wood fire. I had never seen one like this, it was really original!

After breakfast, Dan drove us to a nearby start point of walks called Yurmikmik walks. We walked first to the most “remote” fall, called Kurrundie Creek Falls. The landscape to get there was quite nice. 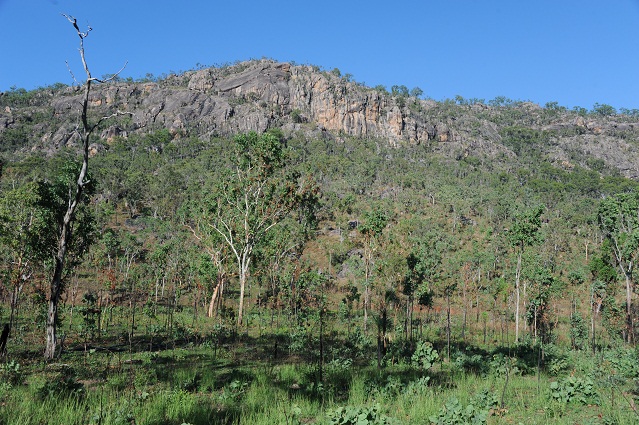 We swam in this natural swimming pool, at the bottom of the fall. That fall was quite special, with a rock blocked between the stones, as if it was going to fall.

Then we walked to the second fall, called Motor Car Creek Falls, gorgeous too. 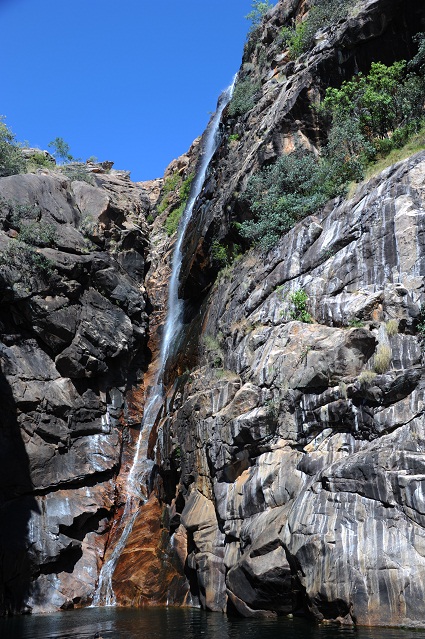 Some of us swam there. This natural swimming pool was nice too.

There were some beautiful big spiders nearby.

We walked back to the parking and drove 3 minutes to another parking area where there was a huge table. That table was already being used by 2 men and one woman, but had enough space to be shared. Dan started bringing some food there, and the woman overreacted. While Dan was being at first polite and cheerful, saying hello, she got really pissed off that we were also coming to use “their” table. Dan stopped being polite and they both started arguing a bit, her saying “Pfff! Guides! They are always like this, so unrespectful of the others!” while he was replying back “This table is enough big for everyone to use! You are from Victoria right? I am not surprised. Only people from Victoria could react like you!” Funny. Australians from different country areas having a row. Ah ah ah. For us, foreigners, that was interesting. He was quite pissed off, but said that it is really really rare to meet so unfriendly people like her, and he couldn’t remember this situation happening before. Anyway, they moved away, and we had a nice lunch after all.

For desert, we could eat a bit of this flower that Dan had showed us the day before. It tastes a bit like lemon, a bit bitter.

In the afternoon, we walked to the third waterfall in Boulder Creek. We had a great swim, so good that I actually forgot to take pictures there, ahah! After that, we drove back to Gunlom campsite. It was about 4pm and we could chill out a bit. Some went swimming in the waterfall at the bottom. It was a really gorgeous and wide natural swimming pool, about 21 degrees maybe.

Here is the ground on which we had put our tents. 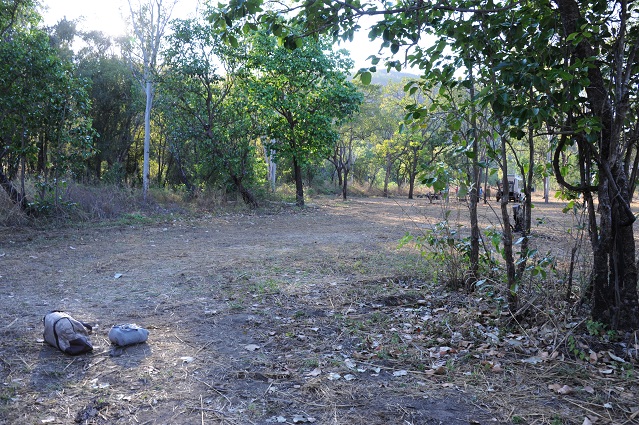 We first drove to the biggest termite mound that Dan had found so far in this park. Here is our car nearby the termite mound. 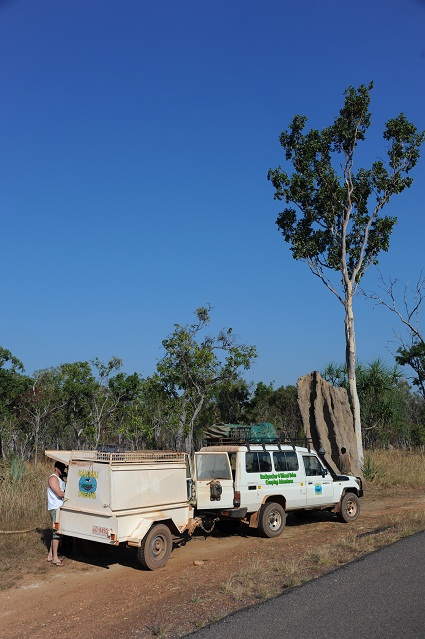 He told us a great deal about termites. These insects are incredible. We had seen many termite mounds during our road trip, but I had not suspected how smart and important for the environment these insects were. This termite mount for example, is probably about 80 to 100 years old! One queen finds a king. They build up a nuptial chamber, at the bottom. Then they make a few kids, first a few builders. Those builders start making the mount bigger. Then she ponds more eggs and makes a few hunters who get out and bring back some food. And a few soldiers to fight and defend the termite mound. The ants are their bigger enemy. If the ants manage to kill the queen, then all termites don’t know what to do anymore, and all of them die, the termites mount gets deserted, the ants manage to take the place. Only one queen lives in a termite mount. She can live for years and years. Termites have a huge role in the eco-system because they chew and process the ground and for other reasons I can’t remember exactly. Amazing termites.

After, he drove us to Nourlangie where he took us around thousands years old Aboriginal paintings on stone like this one. This one is Nabulwinjbulwinj. He is a dangerous spirit who eats women after striking them with a yam. What women are taught is to never do things alone in order to protect them from this spirit. Actually that’s a very wise thing to avoid them being harassed, raped or killed.

Again, Dan knew a great deal about these paintings, and was a great lecturer. We learned a lot about this art. Some of the paintings are thought to be 100,000 years old!

Then we drove to Mirrai Lookout. We had some lunch there, and then had a quick walk to a viewpoint from which we had a great view over the park, and could see 40-50 kilometers away.

It was now time to head back to Darwin. On the way, we stopped in a shop selling Aboriginal art, paintings and beautifully painted and carved didgeridoos. 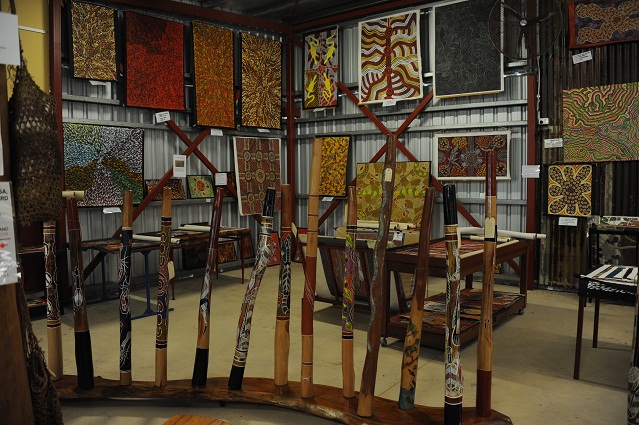 And that was it, end of the 3-day trip! We were back to Darwin around 7pm. Marcel was waiting for us in his flat with a great dinner, and we got some good red wines to enjoy with.

Tomorrow…back to Indonesia for a bit!

#SmokeySydney, time to get a #P2mask from #Bunnings if you haven't yet. I have been wearing one all day and it makes a huge difference. Don't let those particules get into your lungs, #actnow. Get yourself a bloody mask and wear it. https://www.dpie.nsw.gov.au/air-quality/current-air-quality https://www.abc.net.au/news/health/2019-12-03/face-masks-for-bushfire-smoke-haze-pollution/11760618 https://www.theguardian.com/australia-news/2019/dec/05/the-big-smoke-how-bushfires-cast-a-pall-over-the-australian-summer #Australia #NSW #Sydney #bushfires #NSWRFS