We got woken up at Acacia Flat by a bird at dawn which came and stopped on a branch right above our tents and shouted his wake up call to find his partner probably really really loud. What a better alarm clock could you have in the wood? We started packing pretty early. Here is a picture around 7am, having finished to pack my backpack and my tent, same for Jon setting up the stove and Christina finishing to pack her tent. Behind her tent are the three tents and hammock of the group of 6.

The day looked beautiful and there was no rain, which was a relief as we had seen some heavy rain forecast for the Monday. Packing a tent under the rain is not really fun! 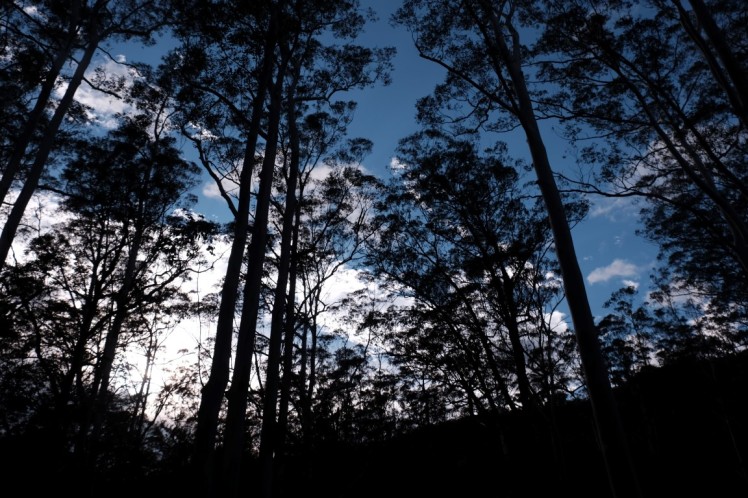 We started walking around 8.15am, leaving Acacia Flat and heading towards Blackheath. 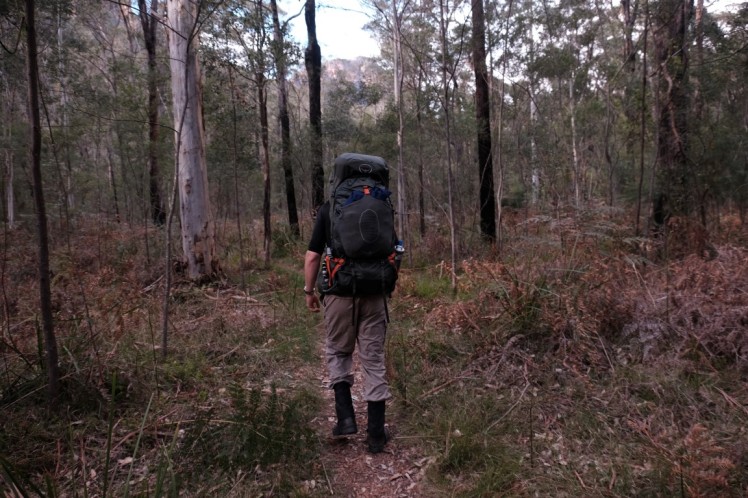 The path was as narrow as during the first 2 days and went through some bush. 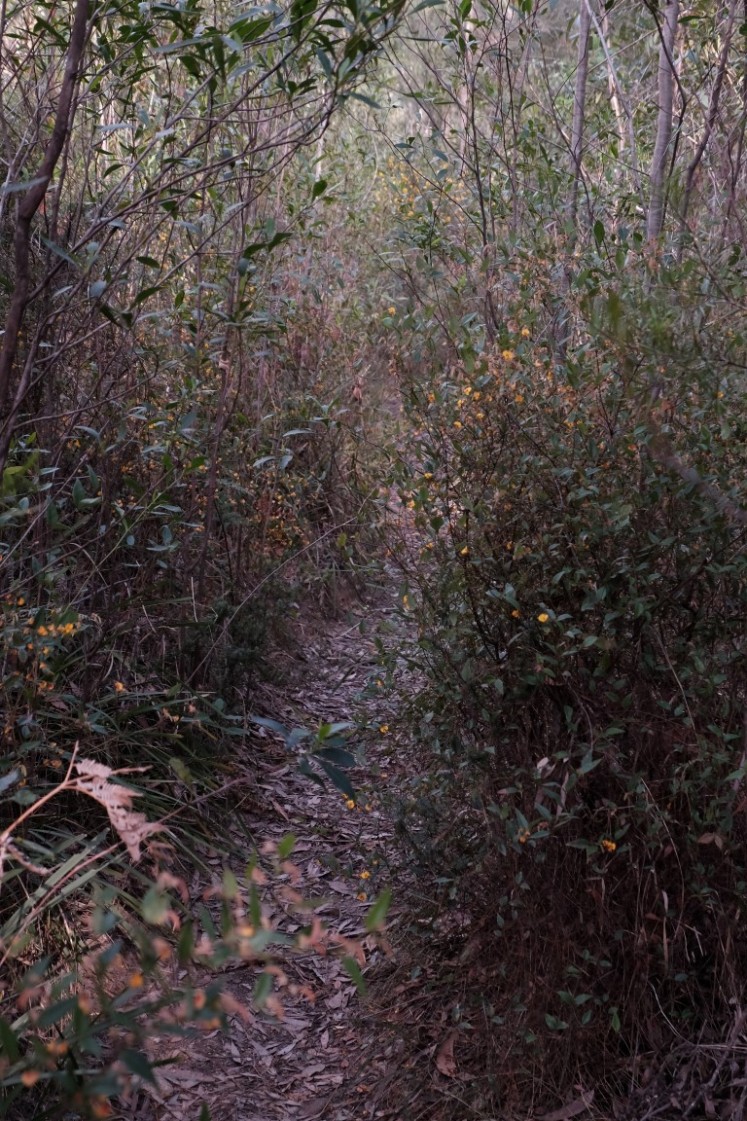 Soon we arrived on an open ground and walked up the hill, enjoying a beautiful view of the surroundings. 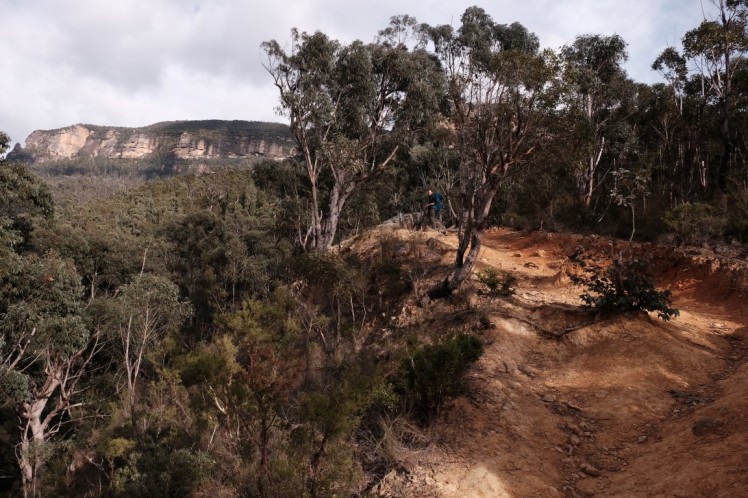 There was an arrow there pointing to the right, which was nice but it was pretty obvious as there was no other alternative to this path.

We stopped at the river and refilled our bottles of water, adding Aquatabs purifying tablets to it the same way as we had the past two days unless we were boiling the water. 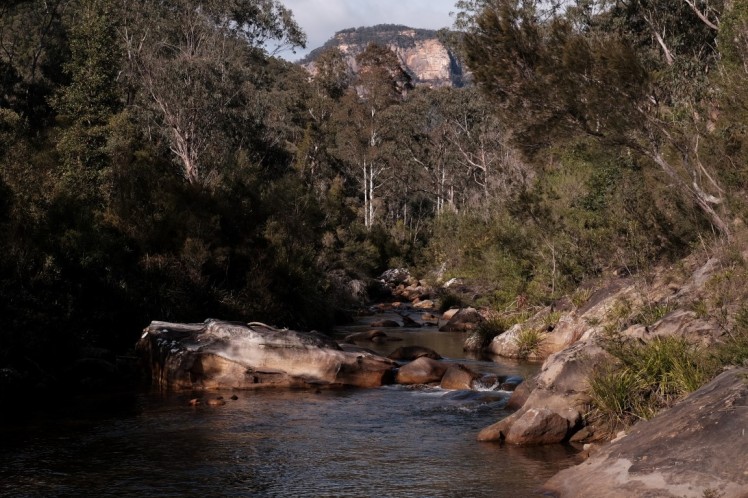 We kept walking alongside the river. 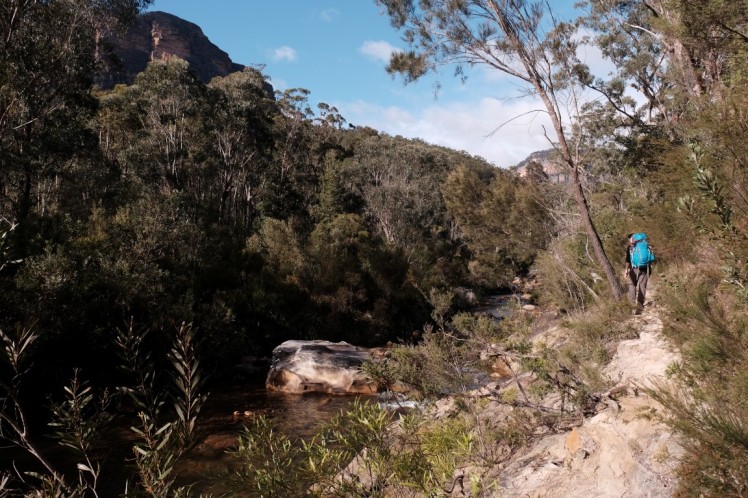 We arrived at a fire place / secret campground.

We kept walking straight after the fire place but after not even 100 meters we realised that we were on the wrong track so we went back to the fire place and added an arrow on the floor pointing to the other path, the one going left, towards the river.

We took that track down the river and arrived at this rock with a sign saying Junction Rock.

There was another sign on our right so we followed it towards Govetts Leap. 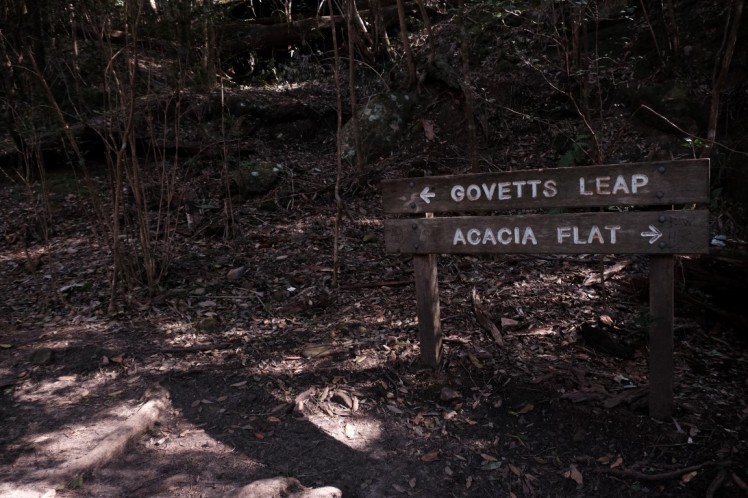 We crossed the river on some rocks and continued on the other side, now left of the river. 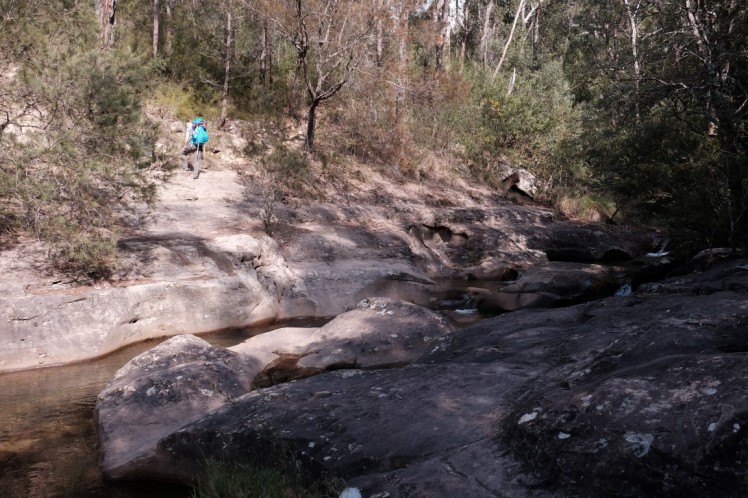 Christina spotted this water dragon sunbathing on a rock.

We continued walking alongside the river.

We arrived at the beginning of some stairs and started going up.

We stopped for a break at this waterfall where I tried a 1-second exposure without pod.

We continued walking up the stairs. It felt like walking up towards the Ciudad Perdida on the Lost City Trek next to Santa Marta in Colombia. The weather was really hot and humid, similar to the one there, although not that humid!

We crossed the river again. 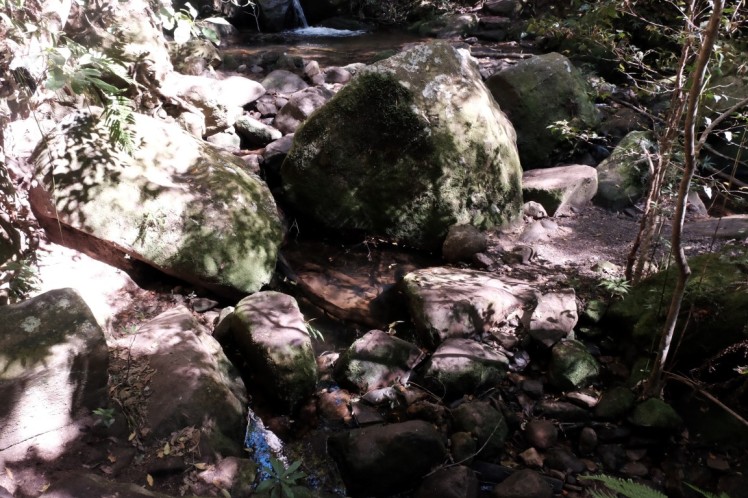 Saw a leaf in shape of a heart. So cute!

We arrived at this waterfall called Govetts Leap which is 180 metres high and had our lunch break there. I tried some long exposures with the filter ND400 and the timer but it was really hard without the gorillapod.

We went up more stairs after lunch.

Going up, we started having this view over the Blue Mountains.

View of the waterfall from the side.

We could see a rainbow later on on the waterfall.

Went up the metal staircase.

A last look towards the left at the Blue Mountains. 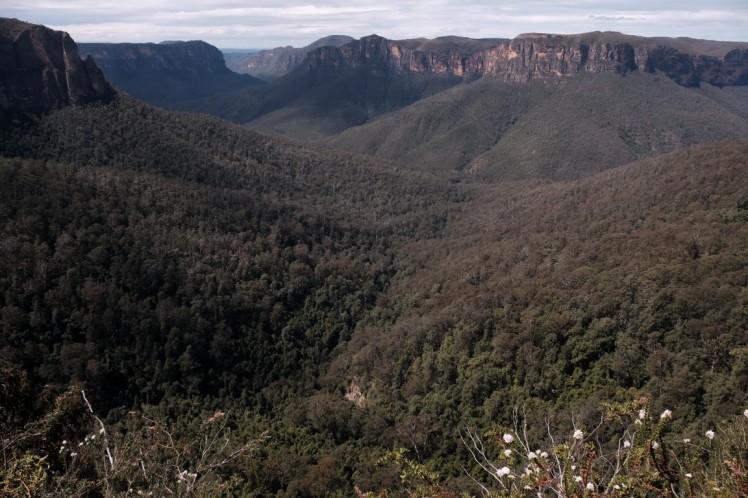 A last view to the right at the waterfall.

There was another skink on the path.

We arrived at this sign. Our 3-day hike was almost over!

A couple of flowers and nice leaves we saw on the hike. 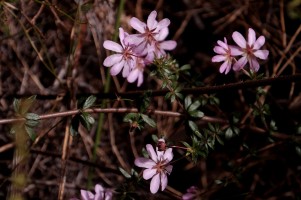 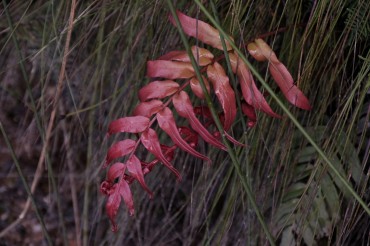 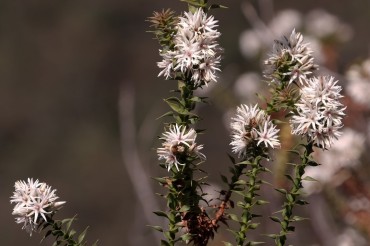 We walked up towards the car park.

There with Christina we met Jon around 1.30pm who had been patiently waiting for us for the last 35 minutes as he walked faster. I said to them, hey about these other walks we see on that other sign here? Wanna do them now? Just kidding. 🙂 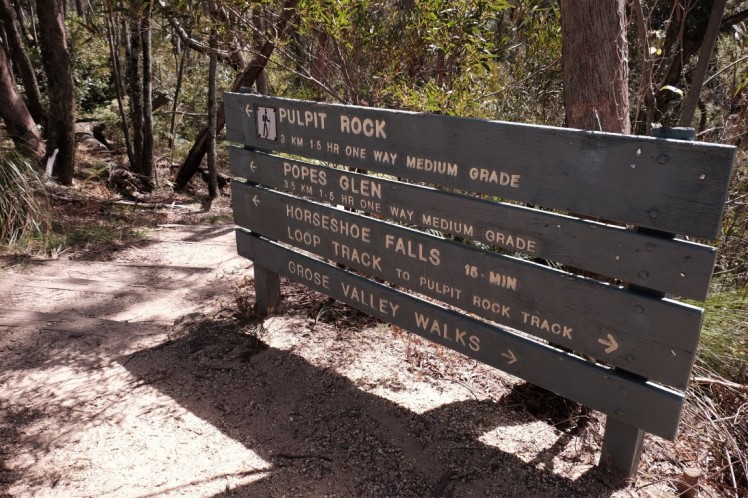 There were some signs with a great map recap of the 3-day hike we had just covered. 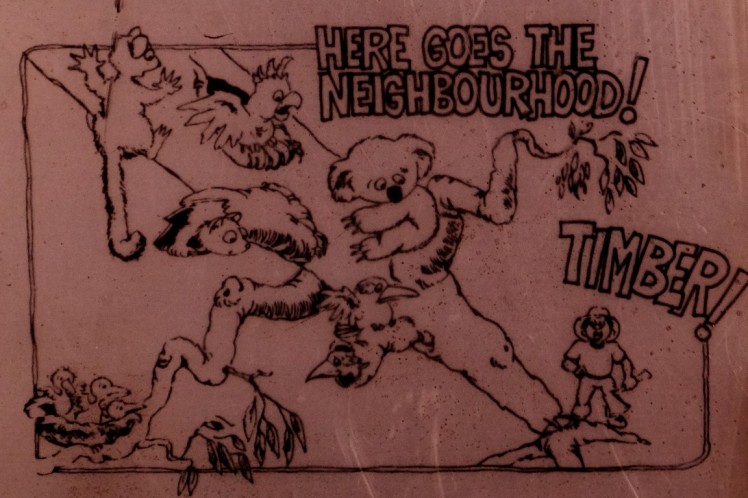 June 1831 was the first time a white man looked at the view from this spot. His name was Govett and that is why they named the waterfall Govett’s Leap.

And what a great view!

About 5-10 minutes later, the 6 arrived, they were not far behind us! They headed to the pub and we headed to the visitor’s centre to give back the beacon.

We gave back the beacon and called to get a taxi to pick us up from the centre to take us to the train station as we felt too tired to walk to the train which was probably 20-40 minutes walk away. There were some great signs and an interesting exhibition inside. It was great to look at the map again, to read more about the recognition given to Aboriginals as the native owners of the land. It was interesting to see that they built a railway in 1867 and that in the 1870’s poets, writers and artists were attracted to the Blue Mountains. It was amazing to think that Myles Dunphy started the ‘bushwalking / hiking’ trend in 1912 when he was 21, drew some maps of walks he would hand over to friends, and perfectionned the art of the swag before the first backpacks got invented in 1927. I wonder how many kilos they carried on their back! And finally, been reminded of why the Blue Mountains are called the Blue Mountains…because of the essential eucalyptus oils given off by the trees play tricks with the sunlight making the green foliage appear blue from a distance. 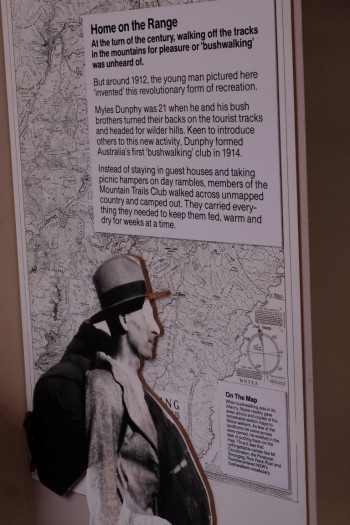 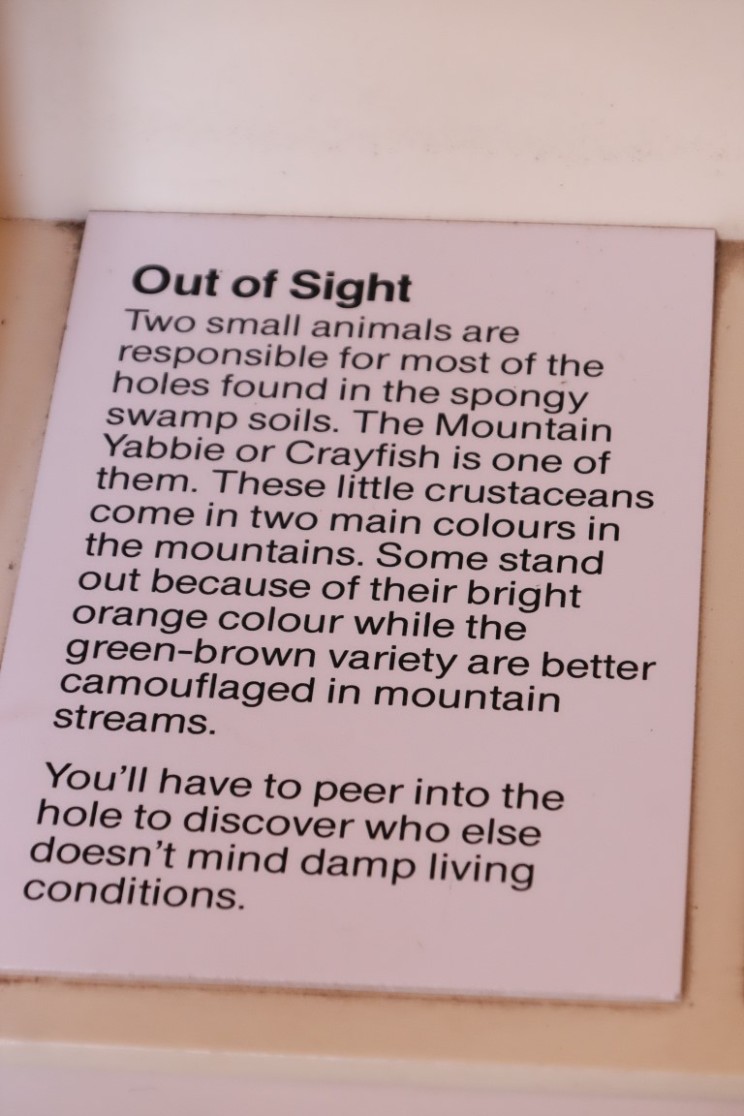 The taxi finally arrived around 2.40pm and off we went to Blackheath station.

We waited for ages at a light. On our left was this pub in which the group of 6 was probably having a fresh beer.

The taxi dropped us next to the train station, which was in front of another pub, they might actually have been in that one. 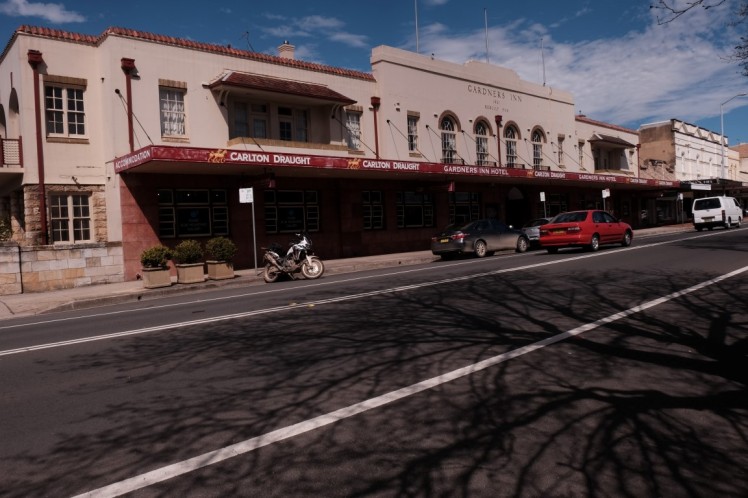 Right next to the train station was a little shop selling books and miniature porcelains. 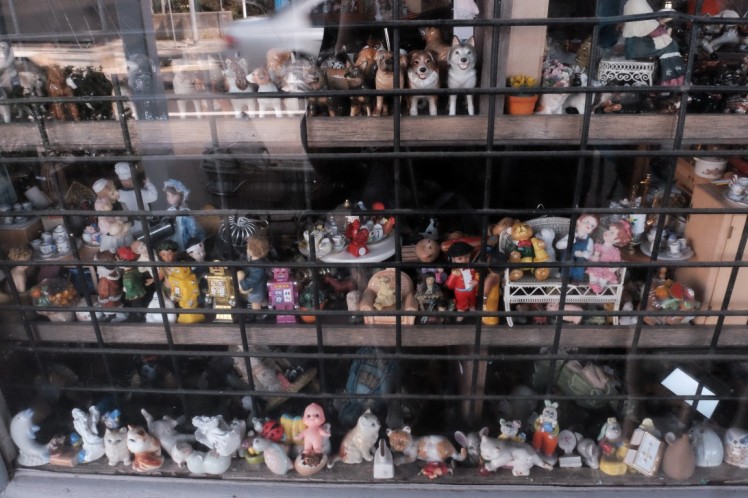 And soon we were on the train!

We slept most of the way, I read a bit too. I had downloaded in PDF a Journal of the expedition that Blaxland, Lawson and Wentworth did in February 1813 which is only 20 pages, with some notes from the guy who collated them together. At the time, the Blue Mountains were impassable. They left with 4 assistants, 4 horses and 5 dogs and it took them 3 weeks to find a way to go beyond the Blue Mountains. The reason why they were very keen to explore was because there was a big draught going on on the East Coast and they were hoping to find better land with more rivers for the cattle. No one knew yet that Australia is mostly a desert, so arid that very few can live on most of its territory. It took them about 3 weeks to go through the Blue Mountains and they were the first colons to manage. An interesting read for anyone interested in their expedition.

We arrived at Central station and it looked empty again! 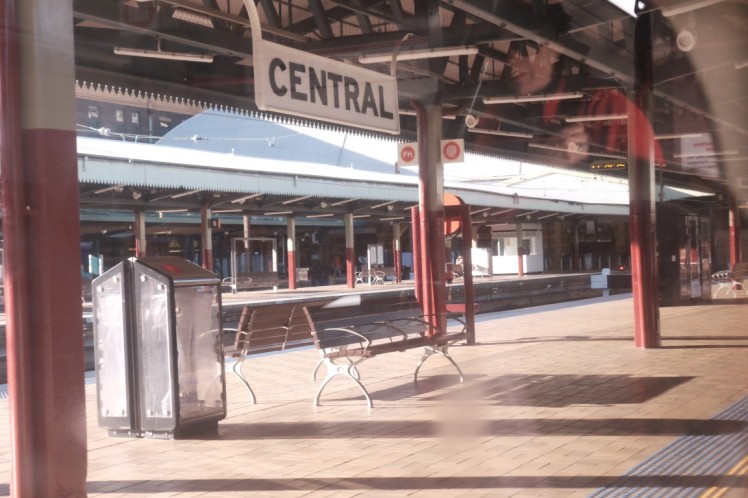 In the train there was a woman who was just arriving from the airport with her husband and had a funny bag of the angry birds. They were probably from Japan or South Corea. Cool bag!

Some photos from our ferry ride from Circular Quay to Manly on the 6pm ferry back. The ‘Carnival Spirit’ cruise ship left a little bit before us. We didn’t catch up with it afterwards but could still see it which was nice. I like watching cruise ships heading to the wide ocean and imagining where they are off to, Singapore and other places. 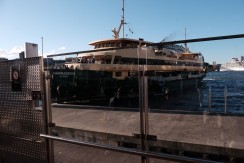 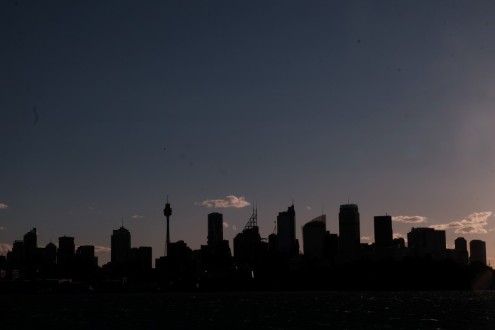 And here we were, back in Manly, disembarking from the ferry around 6.30pm. Much more crowded than the morning 3 days before. Most people who had come for the Jazz festival were now heading back home.

Christina went left, Jon went right, and I went straight on the Corso and to the beach front, walking from here towards what we call here Queenscliff, the end of the beach. The sea was as flat as we had left it, there was probably not much surfing going on that week-end.

The cruise ship was still visible, over there, on the horizon.

I arrived home, unpacked, did some washing machines, put back stuff in order and that kept me busy for a good part of the evening! I had grabbed some flyers about more walks possibilities at the Blackheath visitors’centre and thought: Now, what next? So many options! So many places to go explore! 🙂