I woke up and had brekky on the terrace with the beautiful view.

Then got my bags and jumped into a trike off to the Pantalan pier.

Arriving at the Pantalan pier.

I arrived first at the pier and savoured that quiet moment before the exciting expedition would start, sitting there and knowing that we were all going on an amazing adventure. Each beginning is always such a bliss, when we are in the excitement, looking forward to what is coming. Soon Judith, Andi and Daniel arrived. Then the rest of the crew. Here is a shot of us waiting for everyone, some repacking their bags.

We walked to the Tao boat we had not seen yet which looked really great. 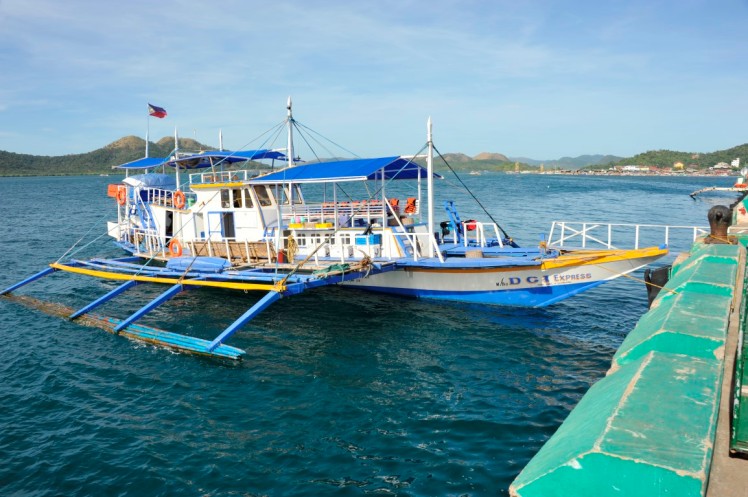 Embarking on a journey.

We were given life jackets to wear when we embarked and didn’t really like them as they were quite uncomfortable and restricted movements a lot. Luckily, soon we could take them off, which was great. I don’t think any of us could imagine walking around with that on for 5 entire days!

Soon they brought us fruits. It was the start of a non-stop snacking and great lunch and dinners of absolutely amazing and healthy food.

Bye Coron Town Proper. See you another time! There are 41 Japanese wrecks to dive there, I wish I had one more week that I could have easily spent there just diving!!

I went into the kitchen and here was Mike our chef starting to prepare lunch. The little lime he is cutting on this picture is called a calamansi, a bit less acidic than limes. 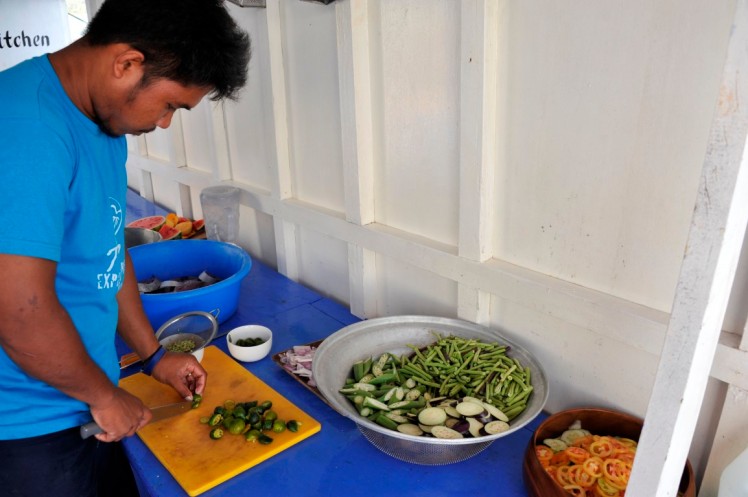 They were really well organised on the boat, with various baskets. Here the basket for fins, another one for masks and snorkles and another one for shoes to put the reef shoes used to snorkle when not using fins.

This is Berghain, the boat’s dog, a quite funny character, always first to jump in the water!

View while we were navigating.

So good to not have the life jackets on!

We saw a lot of golden pearl farms with buoys to which ropes are attached with some type of boxes at the bottom with oysters in them growing the pearls. For the oyster to grow a pearl can take 3 to 5 years!

We didn’t learn much about pearl farming on the boat. It could actually have been interesting to stop and go visit one but that wasn’t the objective of this trip. I found some cool information afterwards explaining how this works. This really good short blog article gives some idea about the process, even if it is about mussels in Japan. Worth a read!
http://www.karipearls.com/pearl-farm.html

That link is about the golden pearl grown in Palawan. It is a promoting website but it also explains the pearl production process quite well when you scroll down the page.
http://jewelmer.com/the-pearl/

While we were sailing that morning, I sat with Urs and Salome, a Swiss-German couple from Zurich who had just spent 6 months travelling and asked them about their trip. They had started in Zurich, taken a train to Moscow, from there had gone on the transsiberian with stops in Omsk and Oulan-Oude then spent one month in Mongolia and then 2 months in China and had just arrived in Philippines. Their experience of China was really interesting. For example, Facebook is forbidden in China but the people are ok with that because they consider that limiting their personal freedom is a sacrifice which benefits the community by helping to prevent people from being able to get organised through Facebook. Their perspective is different from our Western individualists mind. Their response is the one of someone being part of a nation of 1.357 billion people rather than an answer from an individual standing for themselves. It was really great to listen to their travel stories as I have been wanting to take the transsiberian for a long time now!
While chatting all morning, we were served really nice boat-made cookies.

Around noon we arrived at a spot called Coral Garden where the first one to jump into the water was Berghain of course. 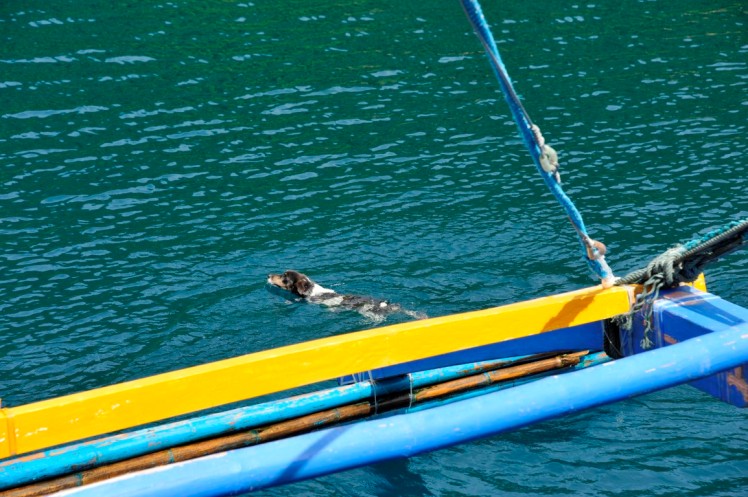 The coral was really beautiful made of hard and soft coral.

While we swam around, there was always 2 of the crew on the kayaks, keeping an eye on everyone.

One thing we got to see there was some salp.
Photo Copyright: Lamar University

It took me a bit of research to find out that this is how it is called. While on the trip, we thought it was plankton, or maybe jellyfish eggs. I finally got the answer on this website:
https://www.scubaboard.com/community/threads/jellyfish-id.447248/

Salp is an animal and actually a vertebrate! Scientists have studied it a lot because they believe that this is probably one of the first vertebrate on Earth from which more sophisticated vertebrate evolved. The Wikipedia page was really interesting as it explained how it moved but also how it reacted to the quantity of plankton in the water and how it might have even an impact on the ocean’s biological pump and the climate change. Without knowing all this, what we simply observed was tons of chains of bubbles with some dot inside which looked like an egg and when holding one to the surface, the structure looked like ice and felt like jelly and the chains were breaking very easily.

We got back on the boat and straight to the kitchen where there was a nice buffet laid out for us. 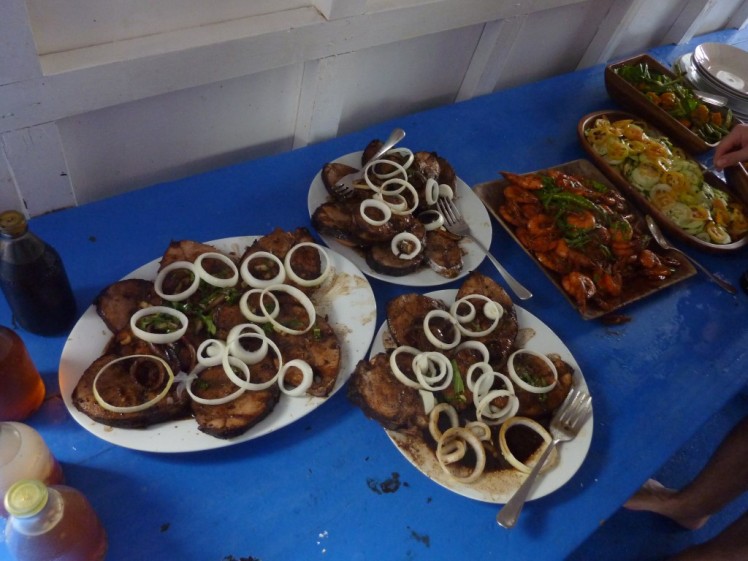 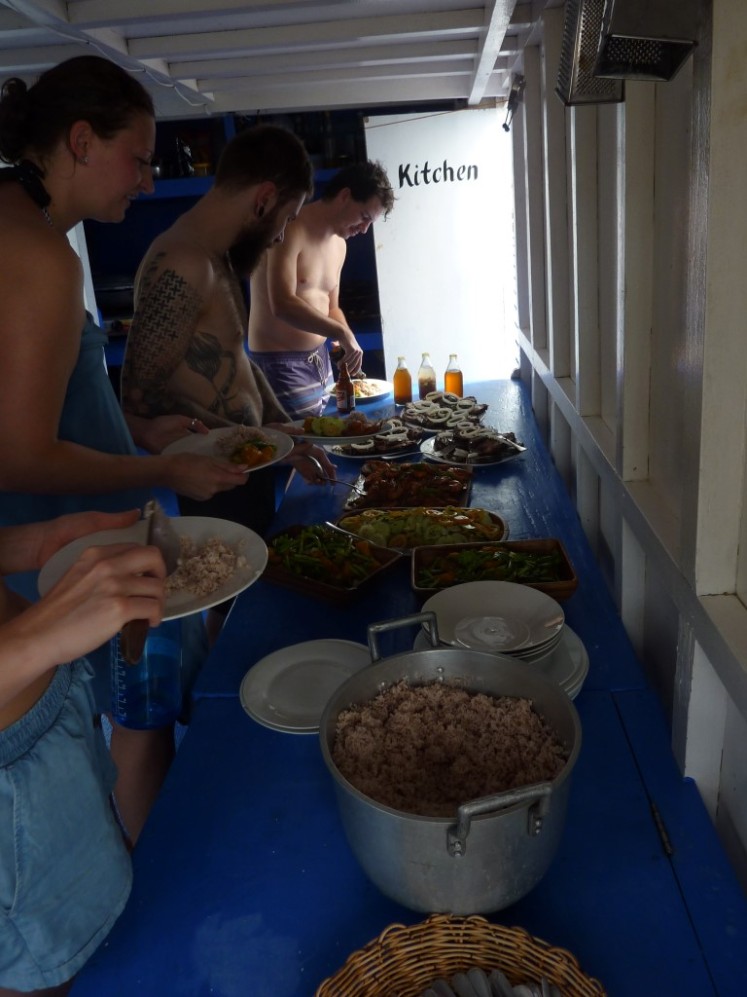 After lunch we stopped at another snorkelling spot, a Japanese wreck which was about 10 meters long and 1 to 7 meters deep. Here is one glimpse of it. 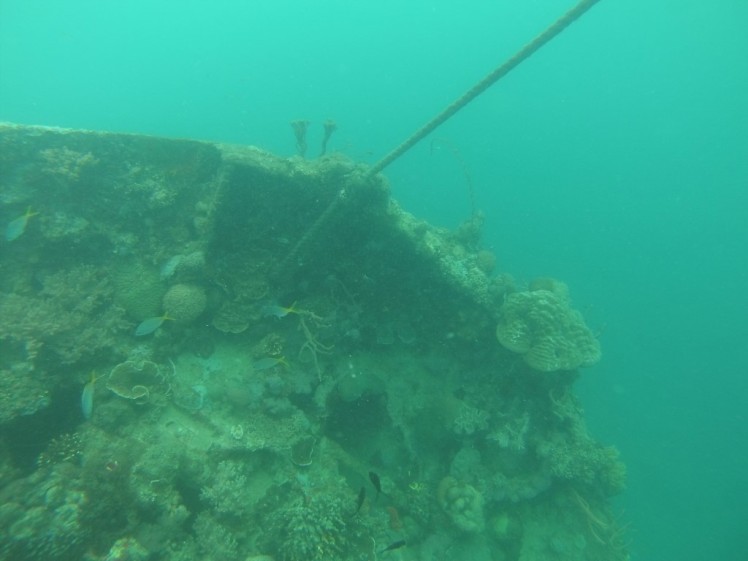 After that snorkel, we sailed for the rest of the afternoon. At first, everyone was a bit sleepy and having a downtime, each individual being in their own little silent bubble. What did we do on the boat during that beginning of afternoon? Some would fish, some would read, some would chill out, on the upper deck, on the sides, around the table, at the front of the boat. The boat size was great, giving everyone space. A perfect boat for 21 people plus a crew of 8. Here are a couple of shots of that first part of the afternoon. Berghain having a nap, Andi fishing and later giving us a fashion show showing how to wear a sarong like a dress (Judith used him as a model to show me a way), Jhun-Jhun grabbing a snapper and a jackfish from the esky and first pretending he had just fished them and then just showing them to us as what we would have for dinner. Jeff chopped some coconuts and passed them around for us to drink the coconut water. At some point we passed another Tao Philippines boat. Then Urs was pointing to something and it happened to be a whale I got a snapshot of, then Jeff and him starred at the ocean, trying to see if there were more, but that was the only whale we saw that day and during the trip actually. Our afternoon was punctuated by all these little really cheerful events. 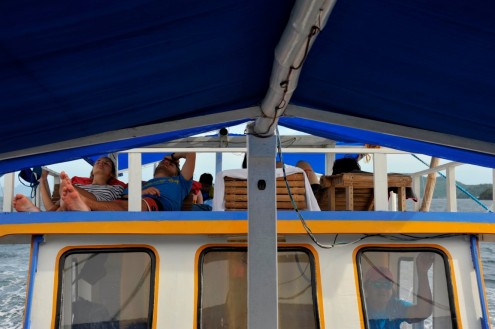 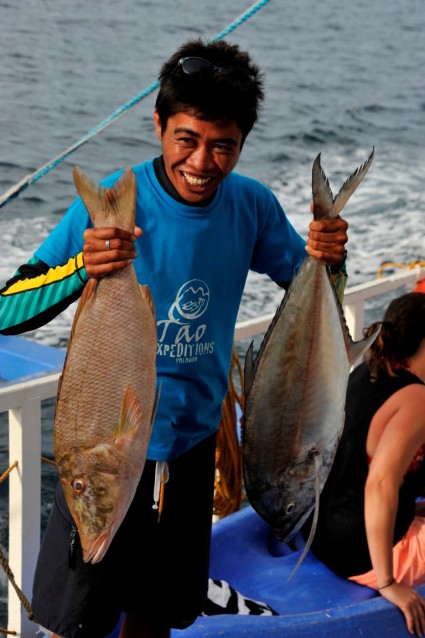 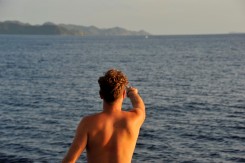 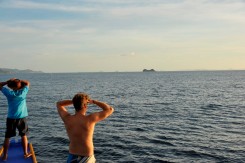 We got to see a beautiful sunset, the sun going down on some small island.

And off and off and off we went, straight ahead, feeling like if we were on a full exploring adventure (even if the crew knew really well where we would end up).

While the sun was going down, everyone started waking up and becoming more social. The downtime had helped to recharge our energy and everyone started being more chatty. We were starting to become curious about where we were heading. 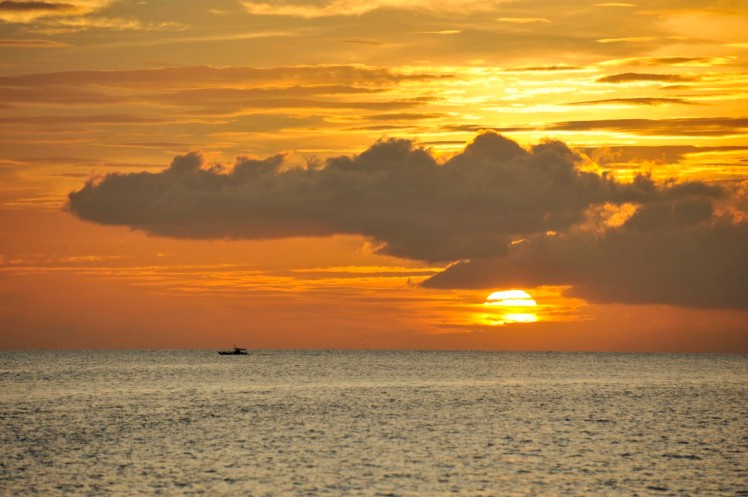 We arrived at a pier.

Who jumped first in the water? Berghain of course! 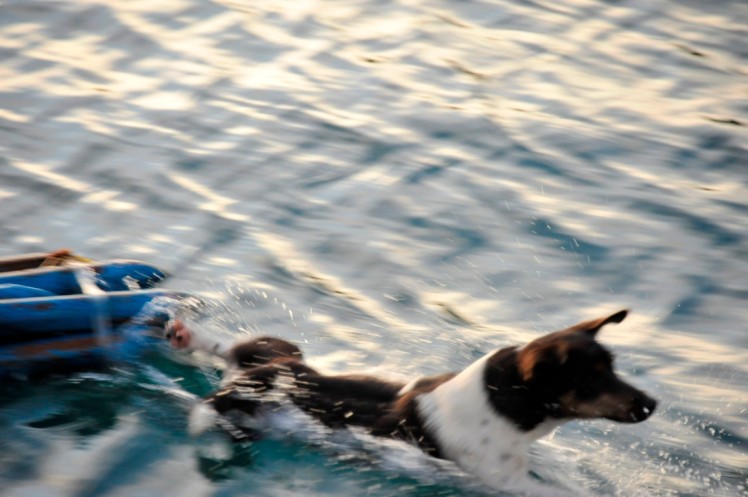 Jhun-Jhun gave us a briefing and explained to grab our bags for the night and walk on the pier to the beach so we did that.

Arriving at the end of the wooden bridge, looking to the right.

The crew helped disembark water and food with the kayaks. 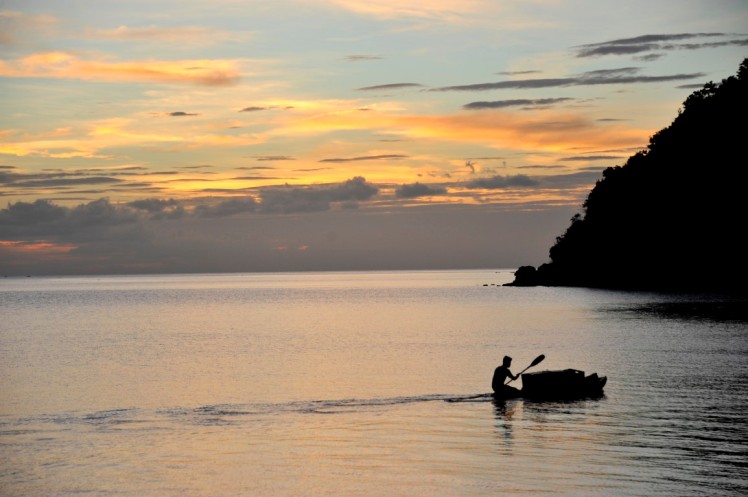 We were given each a mattress, a pillow and a pillow case and sheets and then found a spot and the crew guys in particular PJ and Than were helping us to install this properly. Here was my little hut!

We gathered around the table, chatting and drinking Jungle juice, taking turns to go to the showers. 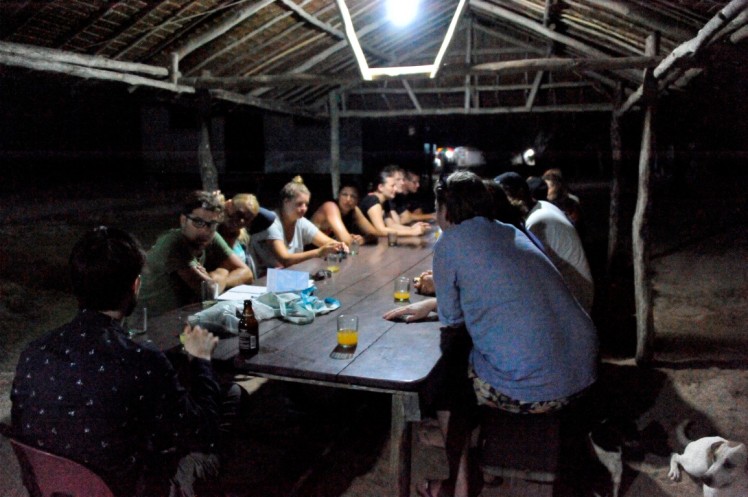 Jeff came to sit with us and said: ‘Hey guys, do you know each other names for everyone?’ and we didn’t. So he made us play a really cool game to learn each other names tapping twice on the table with the hands, then clapping in the hands twice then snapping fingers left twice saying our name twice then snapping fingers right twice and calling out twice someone’s name who then had the 4 claps on table and hands to remember someone’s else name and say their own name twice and call out someone else. ‘This-is-a-game-of-con-cen-tra-tion, eli-mi-na-tion.’ At first, we didn’t really get it. It did take us a while actually to get coordinated. Then it was really funny when someone was hesitating and loosing, we had some big laugh. Here is a short video of us playing.

During that time, the huge jackfish and snapper were being barbecued.

Then once the dinner was ready, Mike presented us what we were about to eat, as he was to do for each meal, making every single meal really special and unique. 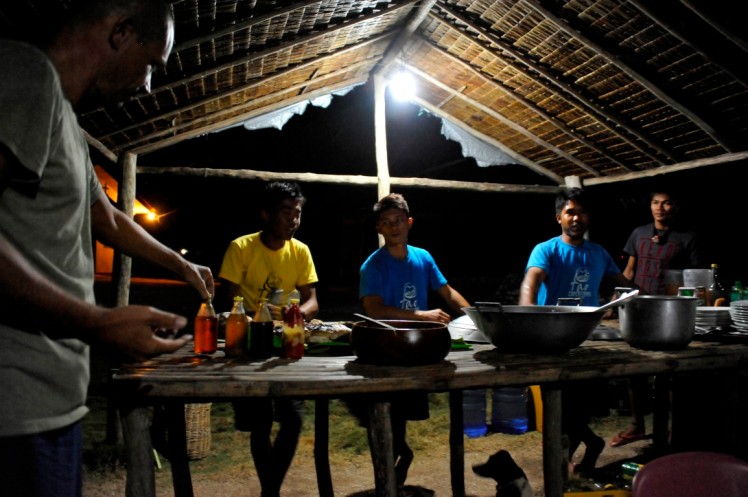 After dinner, we stayed around the table, chatting and chatting and laughing until we got tired and started leaving to go to bed. And you know what I loved the most of our evenings? We formed a team. There was one table only. And…there was no bloody phone on the table!!! Back to old precious times!! When people have to talk to each other. How awesome that was, that day and the next four to have the phone completely switched off, to be in the moment, to talk to people face to face, to have down time and relax.

The trip had just started, and as Priscilla said later on, we thought we might be dead. Because what we had reached was truly paradise, a forgotten paradise, an ellipse in time where time stopped, where what was left was harmony and peace, a time to truly enjoy every single moment and live it intensely.

Here is a map of our journey that first day.

Next day, another day in paradise!