Here was the view I had in the morning when I woke up, the mist coming out of the hut in the background was from the bakery. Andi was coming back from it, he had already helped baking some bread and Priscilla was going there. 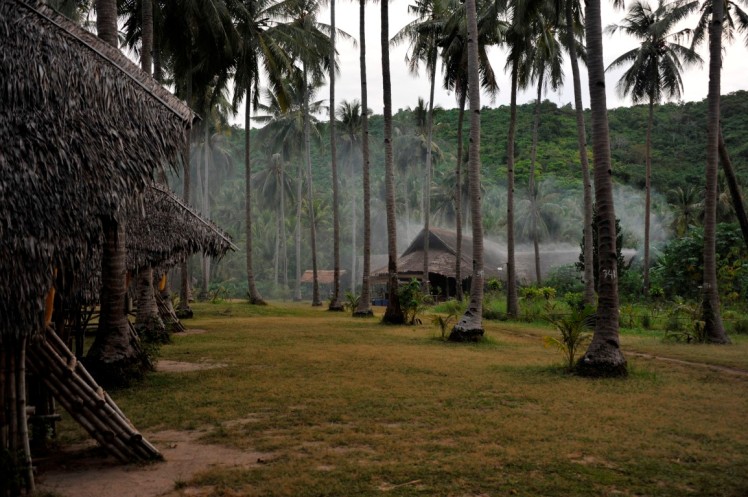 The dogs were cute playing together.

Mike passed by, holding a long leaf on which he would put fruits probably.

I ran into Urs when going to the toilets and asked: ‘Did you sleep well?’ He said ‘No! There was a bloody dog sleeping on the other side of our hut which kept barking and moving all night.’ I passed the culprit a bit later on my way to the bakery. He seemed to say: ‘What? What’s wrong with barking at night? I slept well, thank you!’ 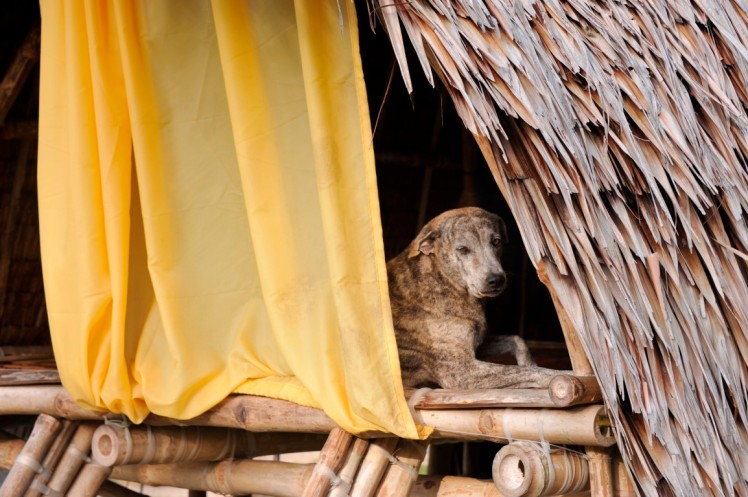 Here were all our huts in the morning.

I reached the Tao bakery and checked out the oven. It looked great. We tried some bread with Urs, Ben and JC, which was pretty hot. In the kitchen, the Tao kitchen team was preparing the breakfast which included some eggs baked in the oven in a muffin tray, such a cool idea! The breakfast was really well presented again and really good. 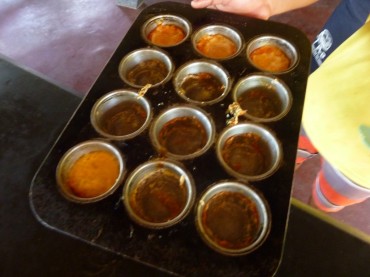 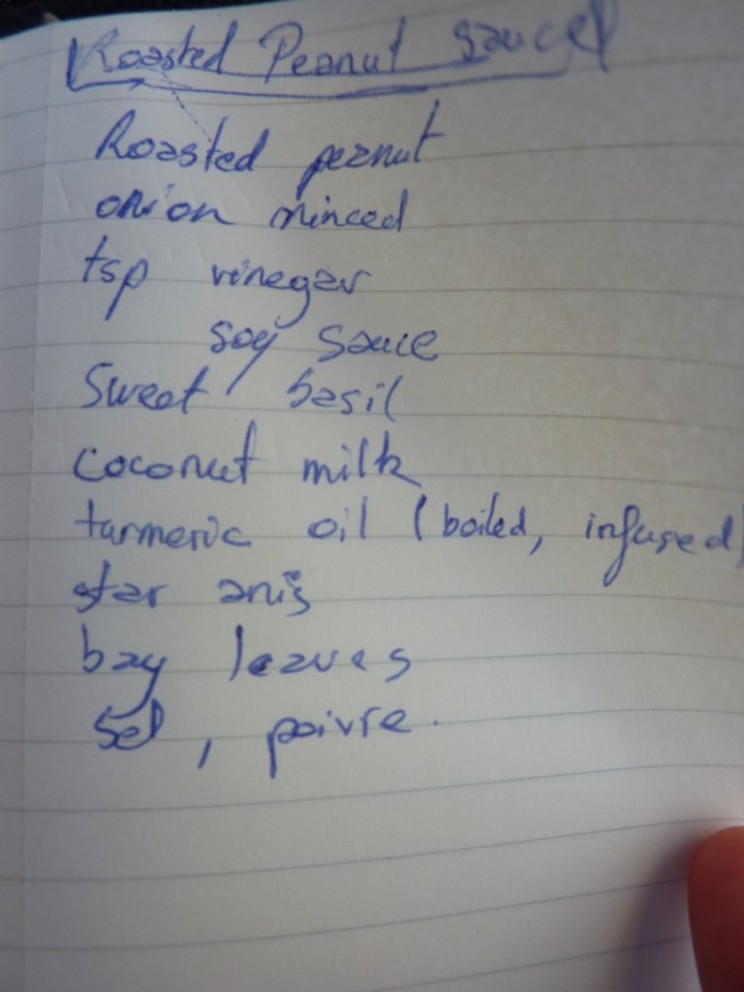 After breakfast, we chilled. Berghain was playing with a coconut and it was funny to lift the coconut as he would not let go and was getting lifted too! Jeff gave us a demonstration of his coconut tree climbing skills. Then we went to sit on a few benches in a mini ‘conference room’ where a woman explained us the history of Tao, how it started and how it helped the communities.

After that, Jhun-Jhun and Jeff gave us a tour of the Tao Farm. It was really hot and we were all searching for the shade. It was very interesting though to learn more about what they were growing and how. We could see aubergines, papayas, later also the mother pig and babies and geese. Berghain was of course chasing the cat. 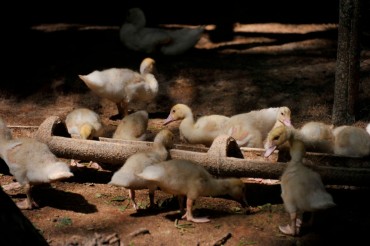 When we came back from our Tao Farm tour, we jumped into the water and snorkelled to the boat. On that hot day, it was really pleasant to go for a swim right after!

And off we cruised. Here was the map of the journey ahead, between points 3 and 4.

First, we stopped at a village where the crew went to buy some fish from the villagers. 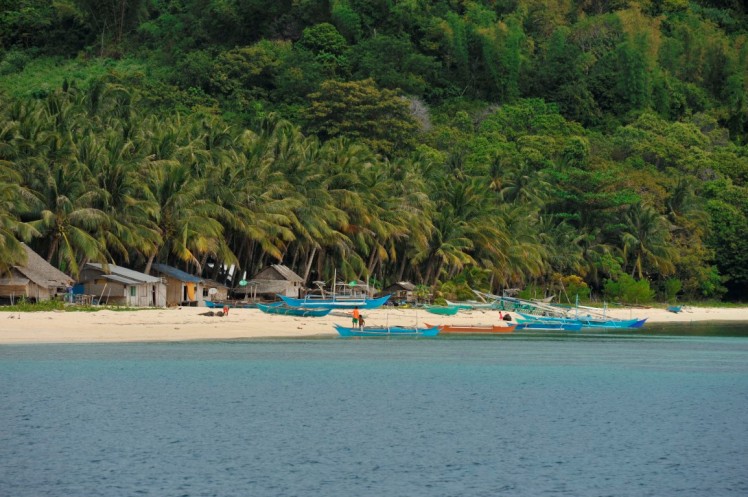 Soon after we stopped at a snorkelling spot and got in our gears and jumped in the water. There was a small Japanese wreck. There were also sea urchins that a lot collected. We snorkelled to the island nearby where Jhun-Jhun showed us how to open the sea urchins and where we tasted them. I had never eaten sea urchins, the taste in itself wasn’t that good or special. Then we snorkelled back to the boat. 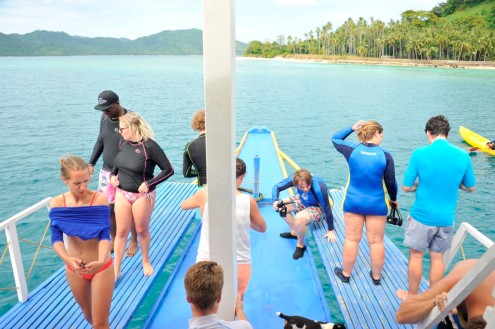 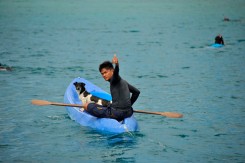 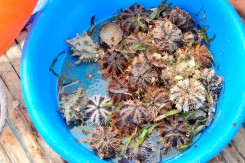 We were welcomed on the boat with coconut cookies which were really delicious.

We cruised from the snorkelling spot to a village from which Mike was from, most of us gathered around the table, chatting, reading, chilling. On the way, there was a funny moment when Priscilla and Jon were on the lower deck at the front of the boat and got soaked by a coming wave which was unexpected! We got to the village and had lunch on the boat while Mike visited his family. 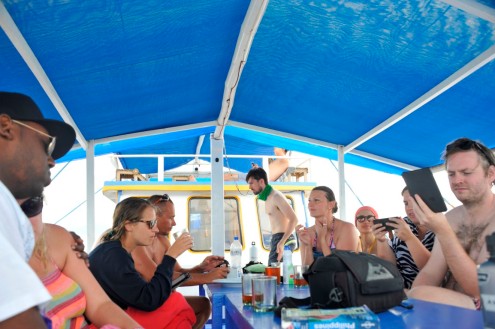 Then we continued our journey. About an hour later, there was a moment when David on one side, and Delbert the captain on the other side caught each a tuna about the same size! It was probably from the same school of tunas. We ate delicious and really fresh sashimis again. While they had been fishing, Mike and Delbert were plucking the ducks they had picked up from the farm in the morning that we would have for dinner, while JC was preparing some banana crepes, by adding bananas and sugar in the crepe then rolling them and dipping them into egg yolk. Then Rolly caught something and we all looked expectantly but it was just a long plastic bag. At least, that was one less in the ocean! 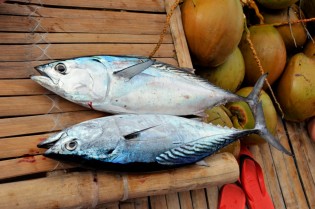 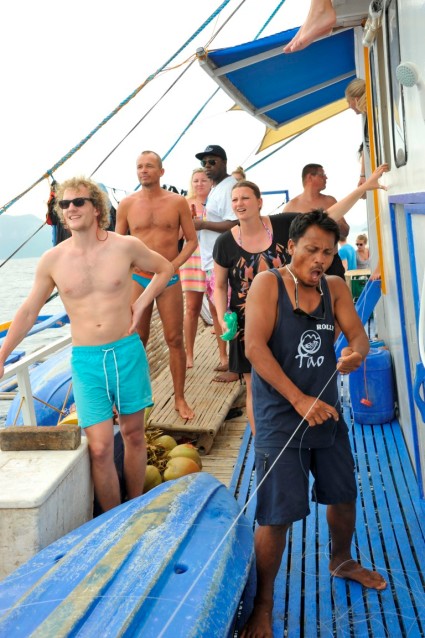 We cruised and cruised the rest of the afternoon, Marc, Tristan and Delbert kept fishing but we didn’t catch any more fish.We passed some really beautiful rocks during that afternoon. 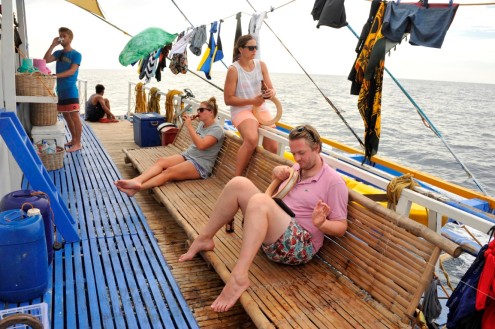 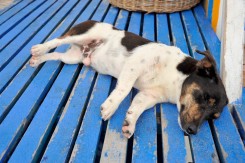 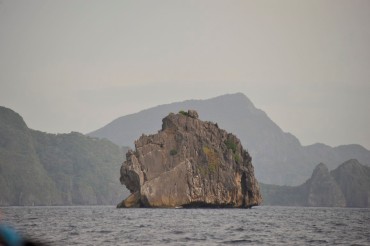 We arrived a destination and could only see what I would call the gates of a hidden paradise as we couldn’t see the secluded beach hiding behind them. 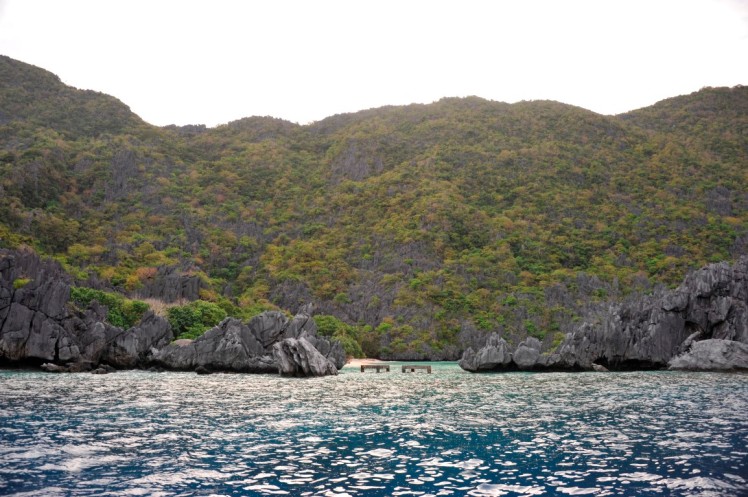 Everyone got ready to jump into the water and snorkel to the beach. 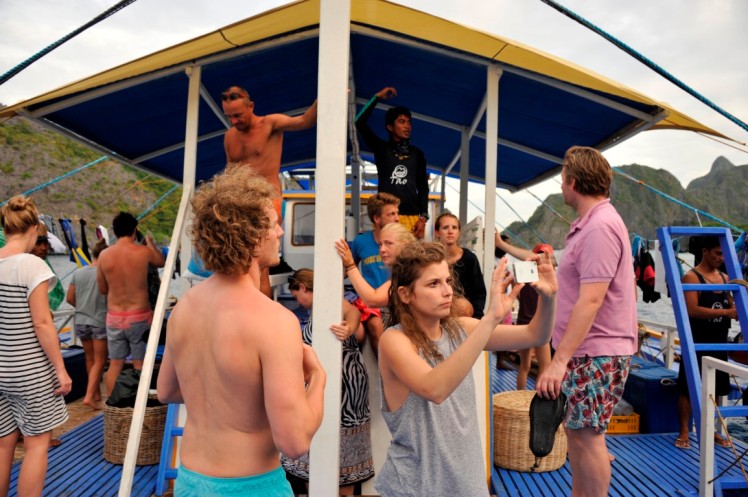 And off we went.

We reached the beach and grabbed bedding and found each a spot to sleep. Ben decided to go to the bungalow which was on the other side of the water so JC gave him a lift with the kayak. Then we all gathered in the water for our last night, chatting and cheering and Jeff brought us some Jungle Juice and we cheered and drunk it in the sea. 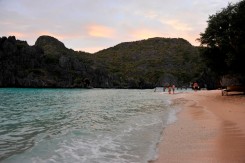 Then we took turns for the open air showers. In the kitchen, Judith and Daniel were giving a hand to Mike and JC. Most had started gathering around the long table which was lit up by alcohol burning on the rope coming from bottles as there was no electricity on the island. 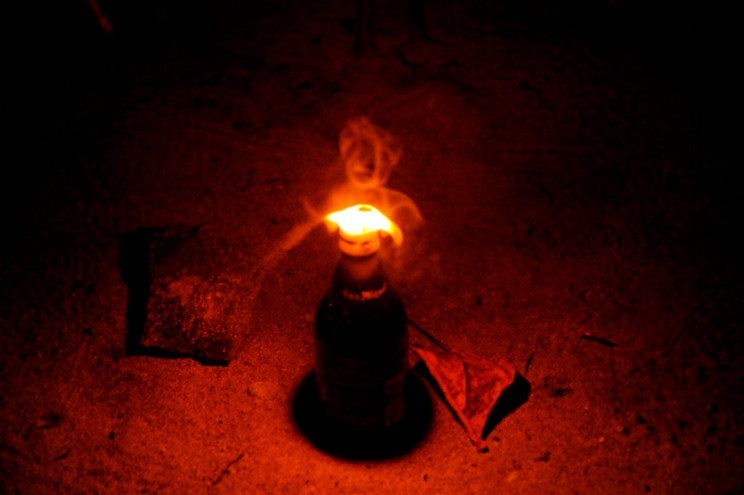 Mike presented to us the last Tao dinner of our expedition. 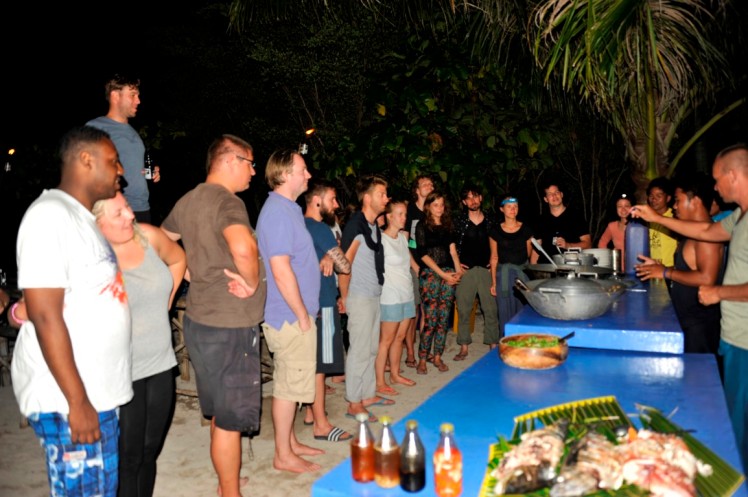 Then we spent the rest of the evening around that table, chatting and drinking Jungle Juice.
Next day, final paradise day of the Tao Expedition, off to El Nido!