Day 1 in Bangkok: I slept and ate and did nothing else. 🙂

Day 2: I left the hotel around 11am and tried to find a shop where a friend of a friend was working, but couldn’t find it. This is the Democracy Monument, it is a landmark for backpackers but funny enough Thai people never know what you are talking about when you mention it, ahah! The architect is an Italian who did it in 1932. He worked for Mussolini just before and you can see a bit of Fascist architecture style in it. 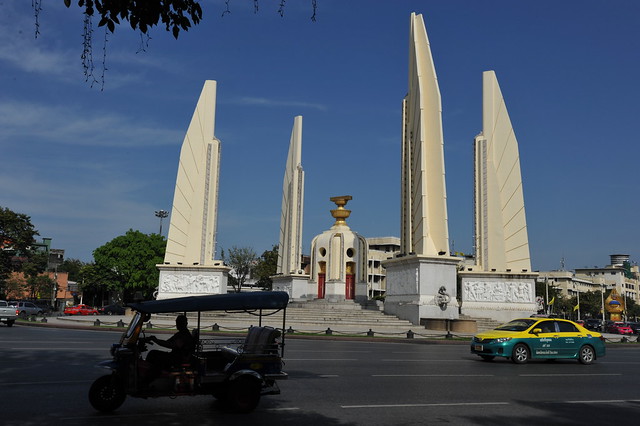 My feet took me nearby to Khao San Road. This is THE big centre of backpackers. See on that image, it looks a tiny bit like Broadway: 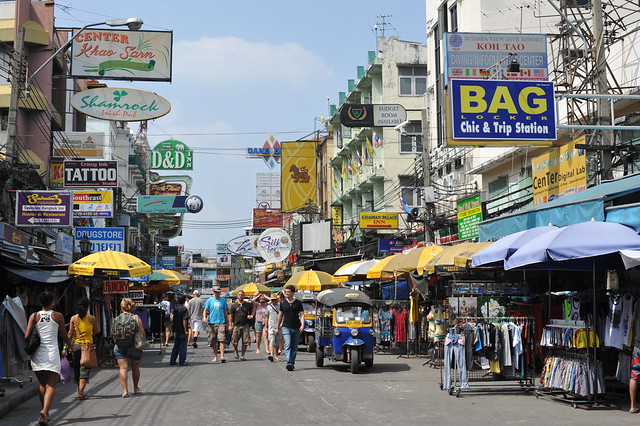 I found that woman preparing food and decided to eat there. 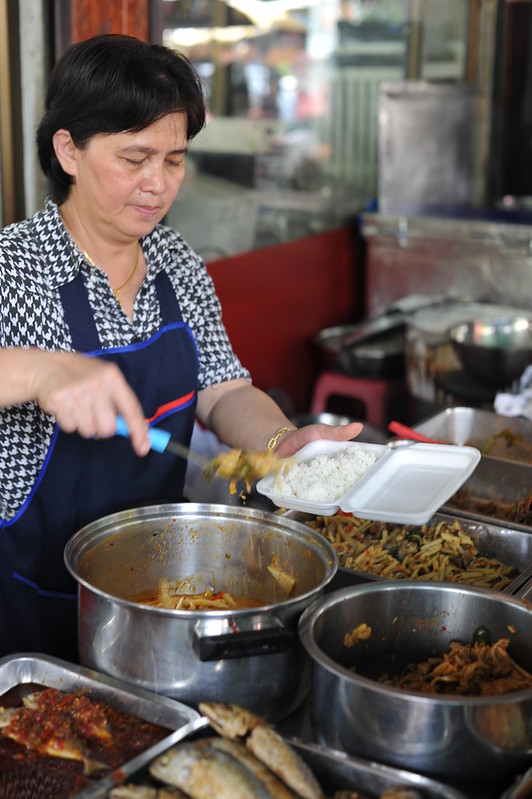 What I chose was a bit spicy and I removed a lot of the red bits. It is really cheap to eat in the street, it cost me only 30 Bahts (about £0.75). One guy sat in front of me and we started chatting. It was an Italian guy, Francesco, in his forties. He had owned a restaurant for 7 years and then was now working as a waiter in summer and travelling in winter. He had been in Asia for 3 months then 4 months previously, but had just arrived this time the day before too.

I learned a few things with him. Don’t withdraw money but change some at the airport. That sounds obvious but until now I always withdrew when arriving in a country, but that extra-charge of 150 bahts was a lot! I also could have paid less taking the sky train then a bus instead of a taxi. Oh well…
A big bottle of water should be 15 Bahts for a good price. And you can buy pineapple in the streets, these are delicious. A good price is 15 Bahts, if not 20 Bahts is ok.

After lunch, we decided to go walk around together slowly which was good for a first day. We saw a few temples and sat in a park where you can use gym equipment for free: 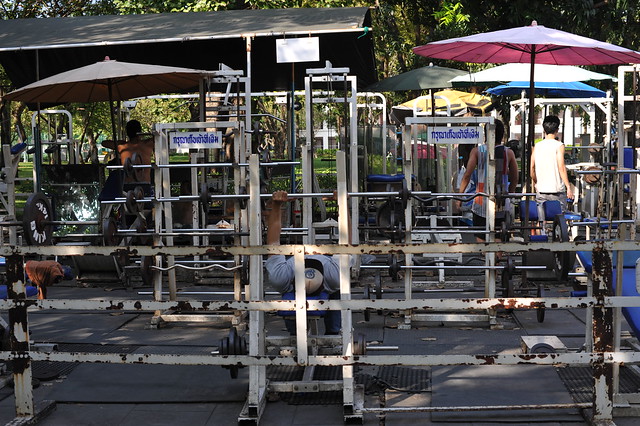 Pretty cool, no? Compared to expensive gym equiment in London.

Then we stopped in a temple where a “Buddhist mass” was being given. The monotonous sounds “sa-ta-naaaa, ma-naaa pa-la-ma-na, ra-la, wa-ta-laaaa” kind of really clears your spirit actually. Pretty cool.

This is how the book looks. Not easy to pretend you can read thai! 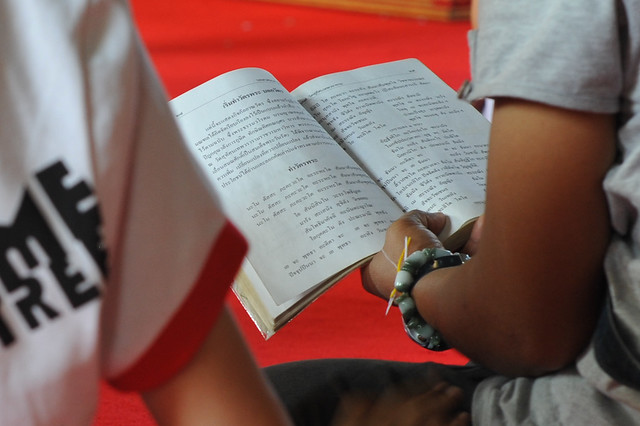 Then we went for a beer and talked about life and travels and after went for dinner in another street place where I had a soup made of rice,water and an egg they put in it raw and you mix it, and add some ginger and oignons stuff. Quite good actually. Again 30 bahts. 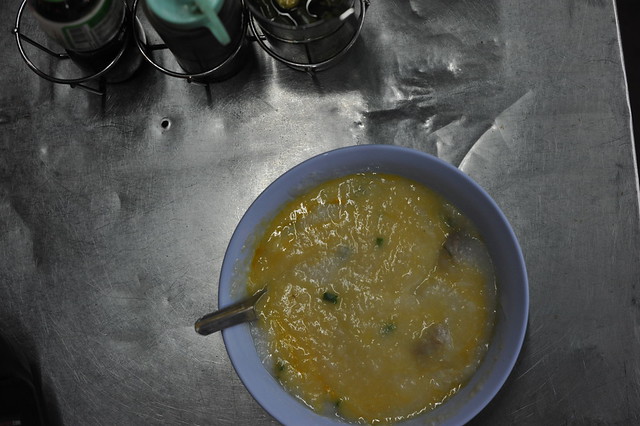 Then I met with my parents at the hotel in the evening, they were coming back from 3 weeks in Burma. It was cool to hear about their adventures there.

We went to visit Wat Pho (50 bahts) and then Wat Arun (50 bahts) with my parents and some friends of them that they had met in Laos when travelling there the year before. 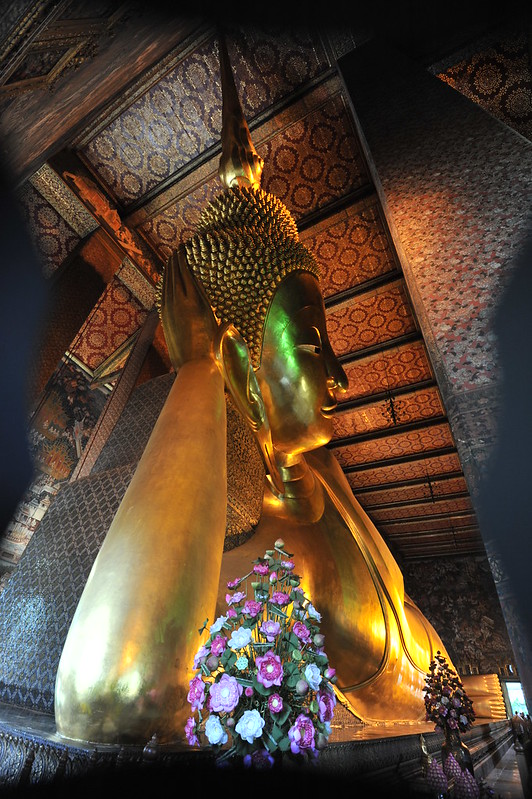 Wat Arun is just in front of it, on the opposite side of the Chao Praya River, so you take a boat to cross the river (3 Bahts). It is made of beautiful tiles, empty inside but you can take some stairs to have a view from the top. 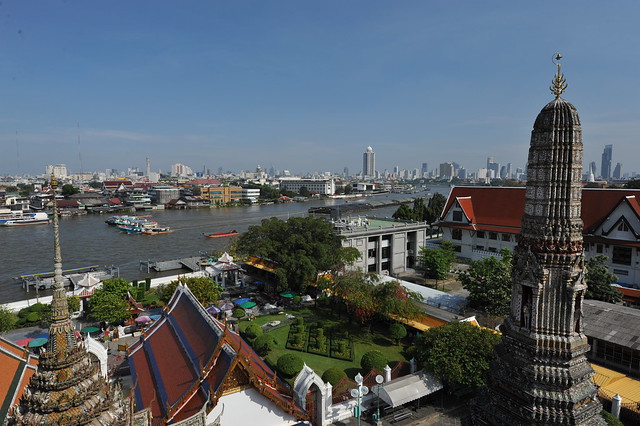 Then we took a taxi to the centre and walked on a very long passage for passer-bys. 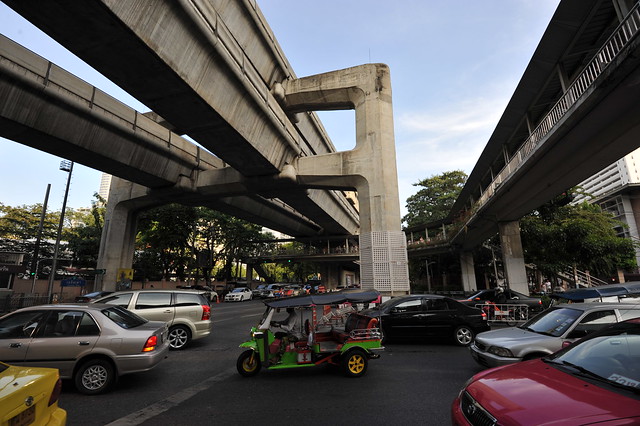 At some point we lost each other, so after waiting a bit I carried it to the end, then walked in the streets and came back by sky train and taxi at some point. Oh well, just normal, we always loose each other at some point when we walk together, ahahaha. But I missed the view from the top of a huge tower,I will have to go again next time I am in Bangkok.

In the evening we went to Chinatown by taxi. So funny Bangkok taxi drivers! Sometimes they are ok to take you somewhere, sometimes they refuse plainly, you don’t even know why! Just like that. Very lunatic!

We went to a restaurant called Texas, where we were the only foreigners and the staff kept laughing at us whatever we did. The food was good though.

We went to visit the Grand Palace (400 Bahts, a bit expensive!). This is a really huge complex, made of beautiful monuments. 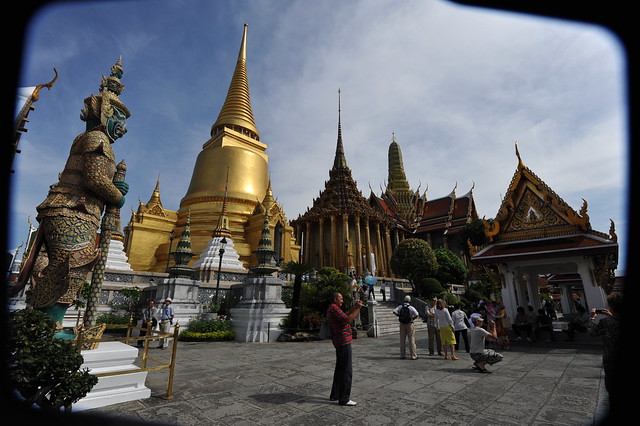 They are quite strict on the way you have to dress there. Long pants only, and shirts covering shoulder. Or else they lend you some free clothes to wear for the visit. There is the Emerald Buddha, a small Buddha (66cm only) made of green jasps and sitting on a pyle in the middle of a huge beautifully painted room.

On the walls of the palace you have the full Indian Mahadbaratha painted (called Makravian in Thai). These paintings are really beautiful and I wish I knew the story better. 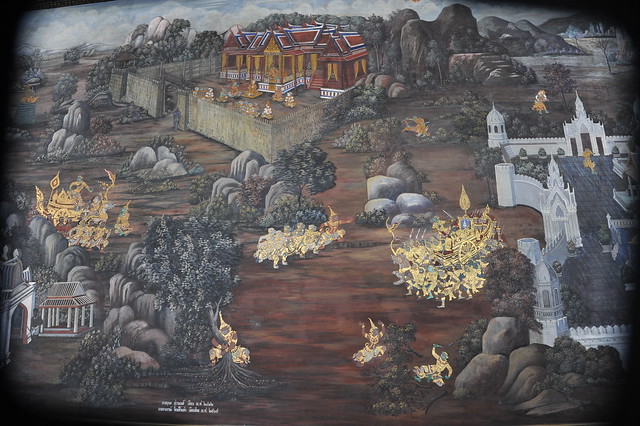 Then we ate nearby some Pad Thai. I tried some weird drink, with a black colour and some transparent black thing looking like noodles. It was quite sugary. No idea what it was, a bit strange, but I didn’t get sick at least.

After that we walked to Wat Paket and when sitting in the room I realised that’s the temple I had been to with the Italian guy, ahah.

Then I walked to Khao San Road and booked in one of the travel agency a seat in the airport shared bus for the next morning at 5am, which cost me 130 Bahts.

On my way back, I tried some sweets sold on the road. This really just have a simple sugar taste. It is yellow egg put in sugar, this is why the texture looks like filanders. Not too bad. 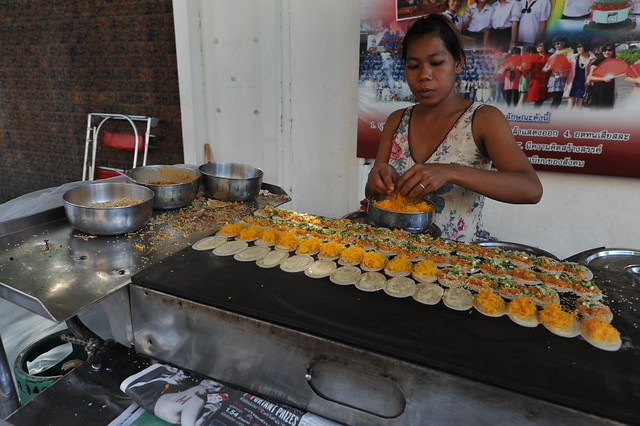 Then went back to the hotel and chilled out, looking at the websites of the Asian Street Photographers whose work is in the exhibition I was going to the next day in Siem Reap.

There is one in particular that strikes me, Andrew Biraj
Check out his work here:
http://www.andrewbiraj.com/

Then we ate at the hotel and my parents left at 8.30pm with a taxi to the airport to catch a flight back to Paris. I went to bed quite early but actually couldn’t sleep. It is the stress of knowing you have to wake up at 4.30am and you rather not miss your alarm clock. Stupid. Ahah.

So Bangkok…Well, very slowed chilled out beginning of my trip. I just played the proper tourist there really sticking to this tiny tiny little bit of Bangkok, a kind of Eurodisney for tourists, the Rattanakosin neighbourhood: 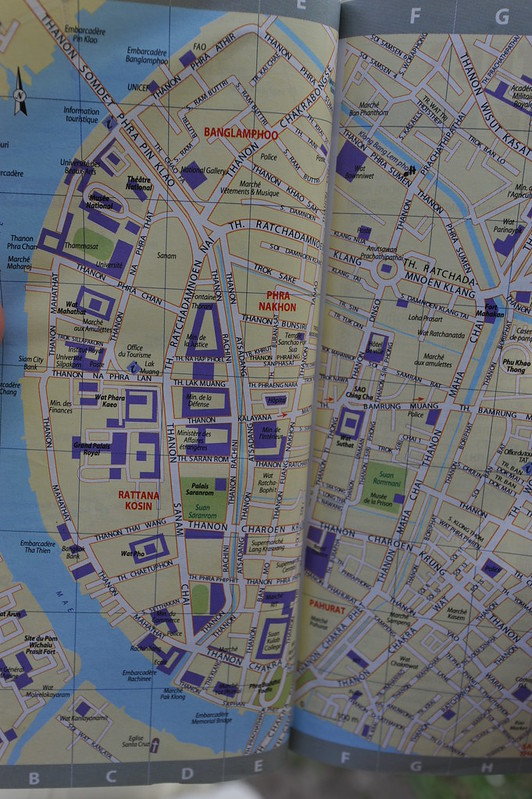 I felt like those tourists coming to London and visiting only Tower of London, Madame Tussaud’s, London Dungeon and London Eye. I will have to come back and see something different!

For more photos of Bangkok, check the full album on Flickr. I managed to limit myself to 50 photos, but honestly it is a real torture!