Bokor National Park is one of Cambodia’s supposedly protected area, with 1,581 sq-km. It is covered with rainforest and according to the Lonely Planet home to the tiger, leopard, Indian elephant, Asiatic black bear, Malayan sun bear, pileated gibbon, pig-tailed macaque, slow loris and pangolin, although none of these animals can be seen by tourists as trekking in the park is currently forbidden.

In the early 1920s, the French established a hill station atop Phnom Bokor (1080 m). They built a four-storey hotel-casino, the Bokor Palace, which opened in 1925, as well as a other buildings such as a catholic church and a post office. However, all this was destroyed in 1972 by the Khmer Rouge forces and never taken care of again until 2008.

Since 2008, the powerful politically connected Sokimex company began an ambitious renovating and building project which plans to transform the Hill into a luxury resort. The casino is getting renovated, and the construction of a golf course is planned. The roads are getting built, and an electric network is getting installed.

With 7 other tourists, we went to see all these old buildings which are inhabited by local workers and we were droven through the park. We saw some waterfall and according to the guide, they plan to transform them into some natural pool. An hotel is being built nearby. We saw hundreds of people working on site, and while it is one way of creating jobs, one can wonder to which extent the park will really get transformed and if this will destroy its natural beauty or respect it. 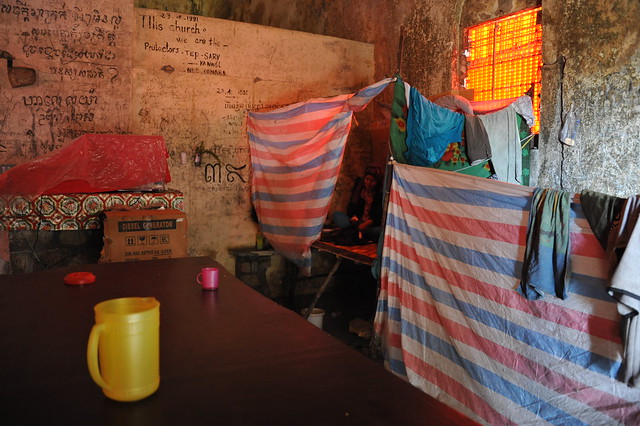