Let me share with you some of my adventures I haven’t told you about yet, hey!

In Bangkok:
The first day I arrived I changed in the bathroom and also changed the battery of my camera in there. Well, I was tired and forgot the battery on the toilet roll. How to start a trip? Forget something straight ahead!!!! (oh gosh…)

In Siem Reap:
_ On the Wednesday I was really down. I felt lonely, really lonely, I was depressed, even if surrounded by so many great people. My mood was really low. Luckily, that has been the only evening so far! I had some evenings when I am eating and spending my evening alone although really few, but I am in high spirit and strong and stable and happy by myself. But that day..I don’t know what I had, but that was weird!

_On the Saturday when I went visiting temples with Manny, I had locked my backpack with a locker in the room as I did every day, and I lost the key that day, stupidly put randomly in a pocket (how unsecure hey). I spent 30 really funny minutes in the evening with the owner of the hotel, a French girl Isabelle and a Japanese guy Hajime trying to open that locker with any mean possible! We didn’t manage…but it was a really really great laugh. I had to bring the bag the next day to some khmer lockers experts at the end of the street who managed to open it in 20 minutes for 1 dollar and made 2 sets of keys for 1 dollar each! Ouf.

In Phnom Penh:
_ I spent a great week with photographer Lung S Liu who became a really good friend with who I was having lunch and dinner between sessions of shooting or editing. I learned a lot from him. Watch out that guy, cause one day he will be famous, I tell you. He has talent, he has an excellent eye. http://www.lungliu.com/

_ We ate some calamari one lunch and got both sick really badly. I threw up in the evening and spent the night on the toilets until noon the next day! Luckily, it wasn’t as bad as what I had in Indonesia in April this year though!

_ The day I shot the photos of Mon, when arriving at her village, I lost my voice recorder. Did it fall from my pocket? Could it be possible that it fell and she kept it? Who knows. I lost it, and that annoyed me, cause recording sounds is another cool thing when travelling.

_ With Lung, we watched lots of documentaries and movies in the evening, at Meta House and the Flicks. I saw the best documentary ever, Enemies of the people. http://enemiesofthepeoplemovie.com/
I discovered also via a documentary again the war photographer James Nachtwey that I didn’t know. We also watched The Trip, The Help, and Beginners.

In Kep:
_A tuk-tuk driver told me about the total eclipse of the full moon the first evening, and I enjoyed it a lot for about 3 hours, watching this moon getting covered and fully greyed out, and then being uncovered. A wonderful surprise for my first evening there!

_ On Rabbit Island, I met with a wonderful couple from Vancouver, in their late sixties, Carolyn and Doug, travelling for one year too. We spent the day together, and then had diner in the evening and a walk in the park the next day and diner the next 2 evenings. We had great discussions and I really enjoyed all this time with them. Follow their adventures here
http://carolyn-doug.blogspot.com/

_On Rabbit Island, one of my flip-flop broke. I stopped and didn’t know what to do on the path, go back to the main beach, try to find some to buy? Then at this moment exactly, a girl came walking bare feet! That was a sign! I spent the rest of the day walking bare feet, and that was actually fine.

_The last night, I saw the most beautiful sunset colours I have ever seen, the sea was purple and pink, it was gorgeous. 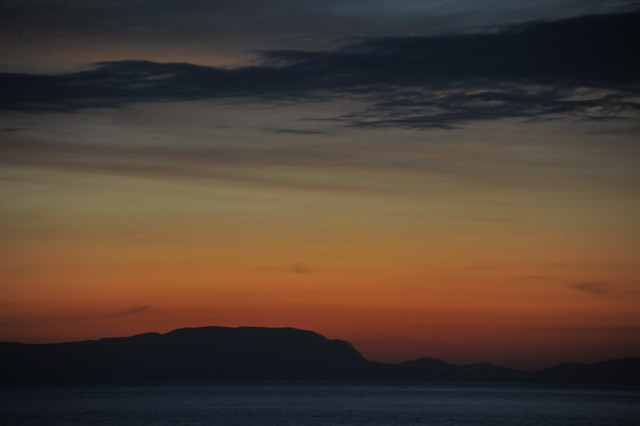 In Kampot:
_I discovered how pepper is growing!!! And kiwis!!! Youhouuu!!

_I had my worst night so far, in a guest house called Ollie’s Place. Apparently his girlfriend left him and since then the place has got down. The bungalows were nice but overpriced, and the shower had no water until I had to dress up again and ask for it and worse the owner Ollie came back at 1.30am drunk with some friends and noisy and that woke people up,  and they played music until 2am!! Bad sleep. Terrible service in the morning, struggle to get any breakfast. On top of that no wifi? Uh??? He had a lovely poppy there though, I was hesitating to take him with me…such a cute little dog!

_I met 2 really cool French guys Pierre and Jérémie at the first cave and as my tuk-tuk driver had to go when we arrived at the pepper plantation, I finished the day-trip around with them on the motorbike! 3 of us ahahaha that was funny! (I can see my parents from here saying that this is very very dangerous, very baaaad, Anne. 🙂 )

_I met with great people during the mini-van trip to Bokor National Park. I spent the evening drinking cocktails with them, 6 of us, and dinner and more beers and shared the room with Emily from Dublin that I had met at the crap guest house on the morning.

_Cambodia saying is “Same, same, but different”
_ Khmers people eat noodle soup for breakfast (ahah funny)
_Pity I don’t speak more khmer (I can still only say thank you = okong chiraan)
_Awsome to not wear any socks or jumper! (Jealous?? ;-p )
_Funny to pay in dollars and riels (1 dollar = 4,000 riels)
_Not that many mosquitoes luckily!
_ Meeting people is what I enjoy the most so far, it is really great, I haven’t been that much alone finally. I keep meeting people every day!

Now guys…Your turn, what were you up to this month?