Merry Christmas!
Sorry for not updating you for 2 weeks, I didn’t find the time to write.

Here is first a map of South Cambodia to give you a sense of the place:

So last time I wrote, I was in Sihanoukville, in south of Cambodia, on the sea side. This is a place that many people dislike. It is considered too touristy, too crowded, too many old men going around with young Khmer girls, too much crap music on the beach, too many young massive partying. I didn’t stay enough long to really get a sense of it, but I didn’t feel either that I was going to miss something.

Then I spent 2 days on Koh Rong Samloen island, which is 2 hours by boat, where I went with a diving centre and other people. It is a small island with an authentic village of fishers, with no touristy massages or pubs etc. The houses are built on pilotis, like in many places around Cambodia.

There was a group of 5 French people really cool, we had fun for 2 days, one guy had brought his guitar and another some pastis we drank in the evening.  First day, I went diving, but the underwater was a bit disappointing.  Second day, the sea was too rough so we couldn’t dive, and on top of that I got sick again, because of some spinach I had eaten for breakfast, so I threw up 3 times all day, 2 being on return boat trip, and I was strongly insisting upon the fact that no, I am not sea sick. We are always proud of not being sea sick if we can afford, aren’t we, hey.

The next day, I took a bus for 7 dollars to Koh Kong, west of Sihanoukville, and is one checkpoint to Thailand. It was a crap journey, as the bus sold as a direct bus was actually 2 buses with a 2-hour wait in between. So I arrived around 5pm instead of 2pm, oh well. I met again with Jérémie and Pierre that I had met in the caves of Kampot. The next day we went on a trek in the jungle with a guide, going there first by boat threw the mangroves.

Walking in it, we felt it was definitely a true jungle. The guide kept cutting the grass with his tool. Red ants kept falling on us, and those red ants are truly carnivorous, when they bite you, it is painful! And they did bite a lot. We also saw their nests. Can you see how some almost look at the camera, ready to jump on me if I approach too closely? Their nest is precious, they are ready to fight for it. Khmer people actually sometimes take them and eat the red ants in a soup!

The next day, it was time for Jérémie and Pierre to go back to Bangkok then to France, and I went my way, to Phnom Penh. I made a very very stupid mistake by not crossing the border in Koh Kong to extend my visa. It would have cost me only 20 dollars. Somehow, I had thought doing it in PP would cost the same, but it cost me 42 dollars. I learned the lesson the hard way.

I met a translator in the afternoon and saw a documentary Cambodia Dreams at Meta House about Khmer refugees who lived many years at the Thai border. The American film-maker Stanley Harper was there. His work was really impressive, it was a commitment over a period of 18 years.
http://cambodiadreams.typepad.com/

The next 2 days, I went with the translator again to the village of Mon and did more shooting of the etjai story. I still need to edit the photos and do a version 2 but here is one I like where Mon is chilling out with her daughter Peach and her son Makra. I felt really connected to this woman, and she is a wonderful mother to them, and so full of energy.

This is one picture to give you an idea of how this slum becoming a village now looks: 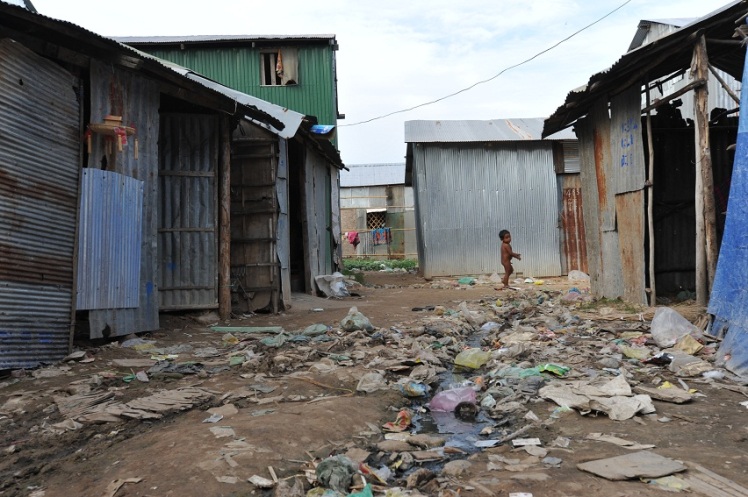 The fourth day in PP, I went finally to visit the Killing Fields, the place where more than 20,000 prisoners were killed by the Khmer Rouges. It is a tough visit, as the full sense of what this place used to be comes to your mind. See these holes? That’s where tons of bodies used to be buried by them:

I saw then the S-21 museum. This was the high school of PP that they transformed into a prison. This is where the prisoners stayed before to be killed at the Killing fields. The Khmer Rouges took a picture of each person before to kill them. The museum shows all these photos, and again, you get a strong sense of what happened there, and it is tough.

It is one thing to have heard of Pol Pot, and the 2 million people who died killed by the Khmer Rouges between 1975-1979. But it is another thing to actually travel the country, and experience that every single Khmer in this country has a story to tell you. Every single person above 30 has people of their family who got killed by the Khmer Rouges. The country is marked by that, with on top of that about 40,000 amputees who jumped on landmines, and 500 people getting killed each year because of landmines still not found. During my time in Cambodia, I read “L’odyssée cambodgienne” from Haing Ngor and would recommend this specific book to really get a feel of what it was to live under this dark period of time for them. He was tortured 3 times, and lost all his family, and later was the actor in Hollywood of “Killing Fields” movie (La déchirure). His writing is really good and you dive into that period of time.

In the evening, I went to Meta House again, where some short-movies about Burma were screened. More important, the very recently liberated most famous comedian of Burma was there. His name is Maung Thura. He was imprisoned four times in Burma for criticising the junta, and was liberated on 12th October 2011 only. The place was crowded, many people came to see him and there was an electric atmosphere, it was an honour for Cambodia to have him visit the country. It was actually the first time he went outside of Burma! Meta House is really an amazing intellectual centre in PP.
Strangely, that evening, I had not taken my camera for once, so I don’t have pictures of the event. More about him in this article here if you are interested:
http://www.economist.com/node/21540672

After Phnom Penh, I went to Battambang. In the bus, I met with Dominic, whose family was from China and who was living in Austin, Texas, and with Adeesh, whose family was from India but who had been raised in South Africa and was living in Japan. Quite a great mix! We went on the bamboo train. It is a wood board put on 4 wheels on 2 small rails, with one motor. Simple. Easy to dismantle when you meet a bamboo train coming the other way.It took us in 30 minutes to a small village and brick ovens, then back.

Then we went to see the Killing Caves, a cave where the Khmer Rouges had put all the bodies, and has some temples. But the most striking thing was to see thousands and thousands of bats exiting a cave, non-stop, for more than an hour. That was truly astonishing. I had never seen that in my life. They form a continuous ruban of bats that flies away and never seems to end.

On 25th December morning, we joined other tourists at 7am on the boat going from Battambang to Siem Reap, all way up the Tonle Sap Lake. It is truly an amazing boat ride, for 8 hours, from which you can see the life of fishermen on the riverside, washing clothes, pulling out fishes from the net, preparing food, children playing, and beautiful houses and boats.

With Adeesh and Dominic, we met really nice people, among them a couple, Hannes Swedish and Elodie French who were really cool and we had a good laugh on the boat. The only thing is I forgot the suncream and got my face burnt. I was red as a lobster and I am now peeling ahah. We arrived in Siem Reap around 15:00.

In the evening I had Christmas dinner with Lorna, the British girl of my age that I had met a month before working at the Angkor Butterfly Centre, and George, an American from Rhode Island who is an investor in the centre, 85 years old and still travels around!

I spent Monday 26th and Tuesday 27th December at the Butterfly Centre. Lorna taught me a great lot about butterflies, and I took a lot of photos for a mini photo story about the centre. Here is one of two great Mormon butterflies. The female in black, and the male in blue, which is flying his wings in order to exhale pheromones to encourage the female to mate with him.

On 27th and 28th Dec morning, I enjoyed the sunrise from the window of my hotel. It was great to see the sun moves between piles. It is truly incredible to see how fast the sun rises in Asia every single minute. That was a great lesson for photography. This is at 6.34am: 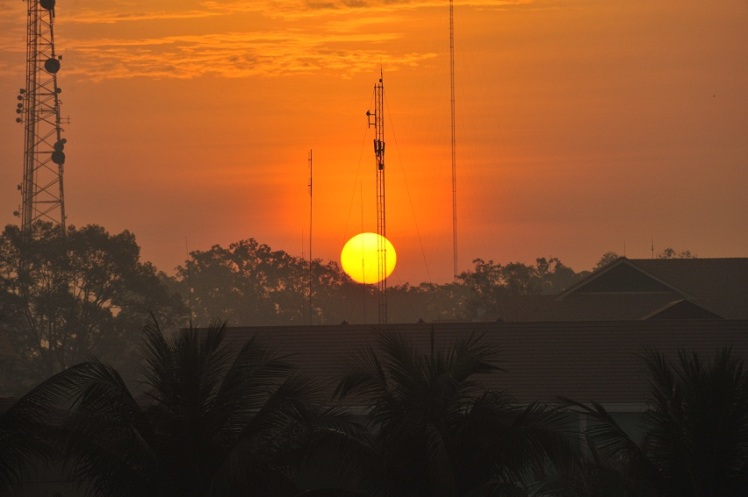 And this is at 6.49am, only 15 minutes later! The sun is so high already at 8am, that the light becomes harsh and your pictures get less contrast. Basically the best light for the photos is between 6am and 8am and between 4pm and 6pm. A bit frustrating!! 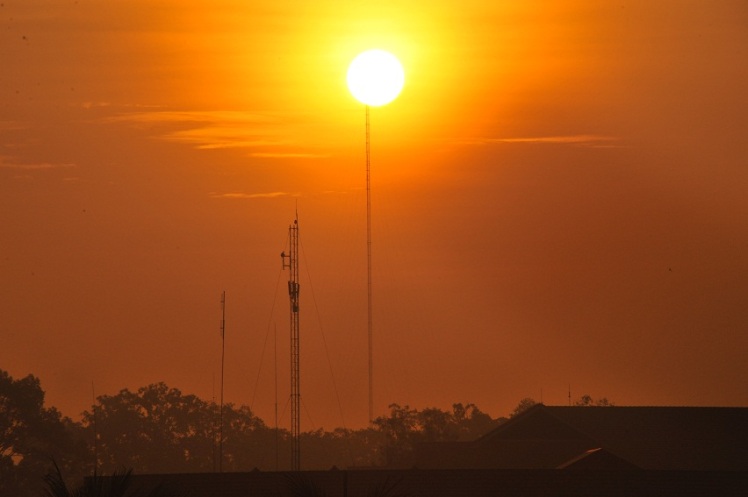 Then I spent my last day in Cambodia editing photos, chilling out, biking around, and also writing postcards to you guys, hey! Iwent to the post office and drove completely crazy the postwoman by asking to have several beautiful and different stamps for each card. Ahah.

On 29th Dec, I took the bus of 6:30 to Bangkok, with other people in a miniman and we arrived at 14:30 there. I went to the hotel my friend Anais had booked, right on Khao San Road. This is the backpacker street and compared to 6 weeks ago, I could really tell that the tourist season was much higher, as it was much more crowded. I felt like being in the middle of Leicester Square on a Saturday night! The I took the boat on the river and then skytrain to go to the MBK mall to check prices of camera lenses. That mall is really huge! I came back via skytrain then motorbike, and Anais arrived around 23:00. We went for a drink and found a great bar where three guys were playing popular hits, same as when I had met her in Saint Etienne 2 months ago.

Tonight we are going to Chiang Mai with a night bus!