First of all, Happy New Year 2012 everyone!!
Hope you will have a great year full of discoveries, and travelling, and learning, and friends, and love, and success, and luck, and the tralala that comes with it! 🙂

So, on Friday 30th Dec I was still in Bangkok and I had just met with my friend Anais arriving from Montbrison the day before. In the afternoon, we just went down the Chao Praya River and back:

We took a night bus to Chiang Mai at 5pm. The motor broke down in the middle of the night and got repaired by a gaz station technician for a few hours:

We arrived in Chiang Mai around 8am, checked in one guesthouse Anais had booked as it was the 31st December and we went for lunch. We got the hottest spicy food I had so far, and were crying with our mouth on fire! Then we went walking around half a dozen of temples. It was interesting to observe the way Buddhists come to the temple and put some notes in one plastic stripe and hang it there to have one year of luck, or buy some food or flowers and offer them to the temple or burn some candles or write some wishes on some cloth.

I imagine people come every day and not only on Christian’s New Year’s Eve to do that. If you are Buddhist, you live in 2555 actually!

In the evening, we ran into Max, a guy who was in our bus, and the three of us went for some thai massage, then for beers and food. We realised when talking that Max was actually a friend of my brother! How small the world is!

Thai have a magic way of celebrating New Year’s Eve by burning some candle in a balloon, wait that the heat has been there long enough to release it to the sky. Thousands of candle balloons were being released by people, single, couples, families, friends. It looks quite symbolic, as leaving everything you experienced in 2011 behind, and putting it in the balloon to ship it to the sky forever and start the New Year with a fresh spirit.

All these orange yellowish candle balloons in the sky created a really beautiful atmosphere.

On 1st January, we took a bus to Chiang Rai in the afternoon, that was about 3 hours ride from Chiang Mai. We arrived there at night time and  walked around the city, especially searching for organised treks of 3 days we could join. In the evening, we met a British guy Nicholas where we were having diner and then went for drinks. He had been travelling for 2 years and seemed to be mostly on a spiritual quest, it was interesting to hear about his way of travelling. I like the fact that you meet lots of backpackers going around, but all have a different approach to things.

On 2nd January, we searched a bit more about the 3 days treks, sent emails back and forth, but the price offered was too expensive. In the afternoon, we rented a motorbike to go to the White Temple. We first got lost and ran into a ostrich farm where we did ride the ostrich! 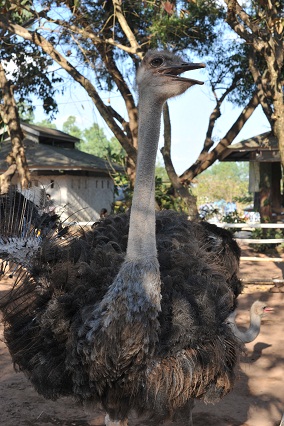 Then we ran into two small temples before to arrive to the White Temple. That temple was built in 1997 only, and when you look closer the materials used are really cheap ones. But it is gorgeous from the outside. You really feel as if you were entering a fairytale, where you are walking towards the castle of some white witch, or white princess that you would not be surprised to see.

In the evening at 7pm, we happened to be passing the gold clock when its show started. The clock was lightened in different colours, some music was being played, and the doors opened to let you see some characters in the middle. Many Thais were standing there watching it. This is a cool clock, we should get more of those in Europe! 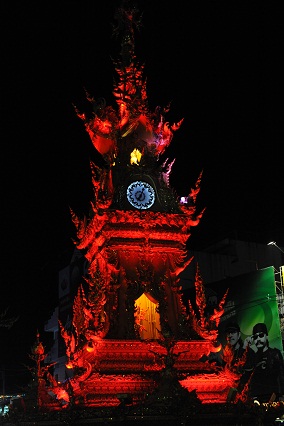 On 3rd January, we took a local bus to Mae Salong. It is about an hour bus and then you stop in Ban Pasang where a blue Toyota gets you to Mae Salong for 480 Bahts total price for the car, with a number of 8 passengers max. There was a already a Japanese guy waiting, we waited with him a bit, like 45 minutes, expecting other people to arrive, but no one else came, so we shared the price between the three of us and took off. The landscape was beautiful, with mountains and valleys of different shades of green. I couldn’t stop thinking “Waou, this is so beautiful!” 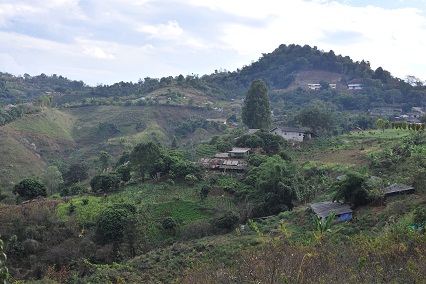 We visited three guest houses and stayed at the first one we had seen. We got some lunch and some free tea coming from the owner’s plantation. He was a very friendly guy and showed us a map and explained us the walks we could do around.

We walked through the village and stopped in a tea factory where a woman explained us a bit about the functioning of it. Here is a kind of oven in which they heat the leaves at 200 degrees to “ramollir” them. Then they press them with the other tool and then let them dry on some basket. 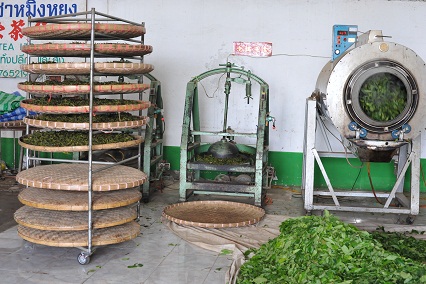 We continued our walk down the road then down to some school and Akha village and then back via the tea plantations (getting lost first for about an hour of course before to find our way!). The landscape was really gorgeous.

We ran into a village at the end and played with the kids a bit. I was taking their pictures, they were posing or playing and I was showing them the photos. They were a really cool crowd.

We had an early dinner and chilled out. I took every single thing out of my bag and showed it to Anais and we discussed its useness. Anais is really good at travelling light and simply, so I love getting her advice on this. I put aside about 3 kgs of things that I actually didn’t use and didn’t need and that she could take back to France for me. The bag felt a big lighter after that.

On 4th January we woke up a bit earlier, went down to the market, saw some small temple, and walked another trail. In one of the village we ran into a woman pressing some tree branch on the ground. At first, I thought she was getting rid of the green of it to use that green powder for painting later. I discovered later on that she was getting rid of the colour to then dry them and use them to make brooms and sell them. 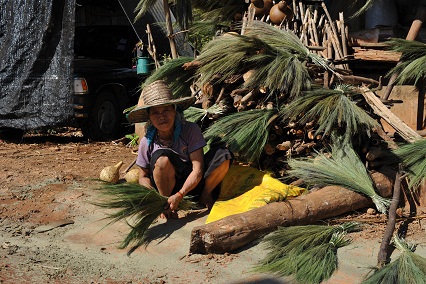 We kept walking around. Isn’t that landscape beautiful. When looking back at this picture below, I feel like jumping into it and being on this path again to follow it wherever it takes me.

In the evening, all tables were full so we joined a table and met Laure, Thomas and Céline, French people. Laure was travelling for 6 months and had had some scary contact lenses infection in Malaysia that scared me a bit but not to the point of dropping mine for glasses yet though. She spent a week there at the hospital, and almost lost one eye! That’s where you realise travel insurance is worth taking. You really never know which kind of problems you could get into.

She has a blog too, and manages to be much more concise than me, if you wanna follow it:
http://alonsoworldtrip.wordpress.com/

On 5th January, we woke up at 7am and went to the small market nearby and then walked about 300 stairs up to a temple and took some other trail after for 2 hours. Picture of the market:

We took a blue Toyota again at 11:15 to Mae Chan then a local bus to Chiang Rai again. We went to the Hill Tribe Museum and learned a lot about the different ethnies living in Northern Thailand, the Karen, Akha, Lisu, Mon, etc.

Then we searched for a massage place and ran into Laure, Thomas and Céline again. We went for a massage then dinner together. Then Anais and me went for drinks as it was her last evening. We ran into a Bob Marley pub where we discussed with two French guys until 4am.

On 6th January, Anais left for the airport for a 1h15 plane from Chiang Rai to Bangkok. I slept a bit more and also did some research about Yunnan, the Southern province of China which is just above Thailand, Laos and Vietnam. I am hesitating to go there.  It looks really fantastic, and full of beautiful landscapes. I decided in any case to get the bus to Chiang Khong and take the slow boat to Laos first. So I went for lunch and got on a local bus, and was in Chiang Khong around 4pm. This is a very small quiet city right on the Mekong.

Tomorrow, slow boat to Luang Prabang, in Laos for 2 days!