We took the boat to exit Taman Negara National Park. It was a 2-hour ride to the exit point. The river was brown, and we were surrounded on the 2 sides by the beautiful jungle. 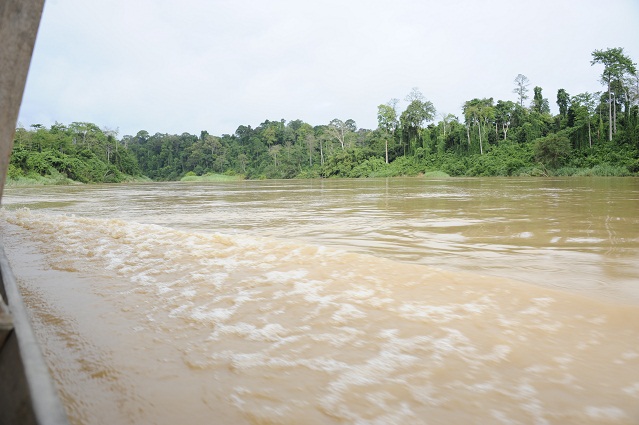 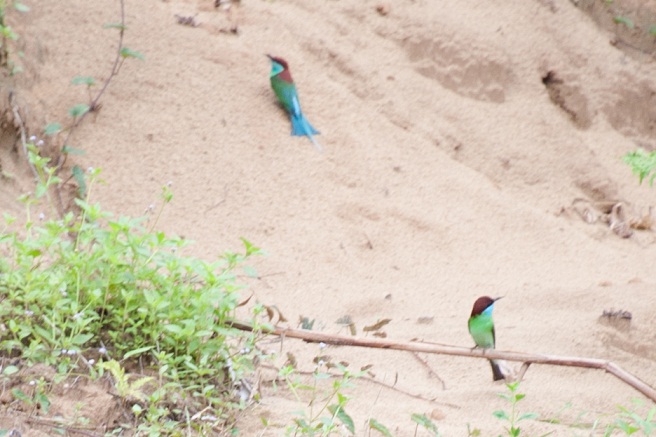 Then we saw another beautiful one later.

We arrived around 11am on shore and took a bus to Cameron Highlands. In the bus, we met Emmanuelle, a French young woman who works in Strasbourg for France 3 Alsace as a journalist-camerawoman. She was really cool and interesting. Here was a bit of the landscape we saw during the bus ride, which was turning a lot. 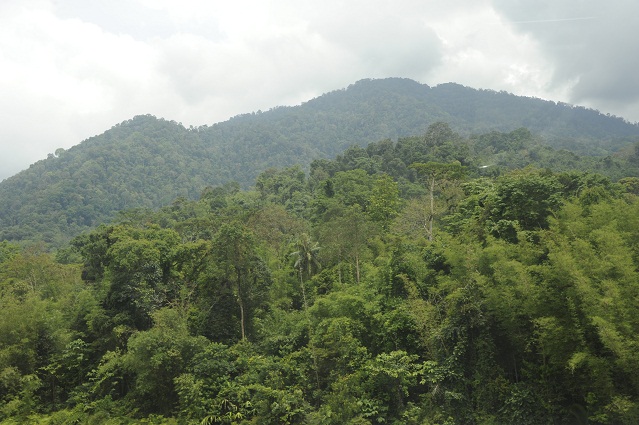 We arrived in Tanah Rata, one of the village of Cameron Highlands, around 3pm. It was raining a bit. We checked in an hotel, chilled out a bit, and went around to ask for a day tour for the next day to go to see the rafflésia flower, if there was one around! This flower once opened only lasts 7 days before to die! Luckily we found one friendly agency which had found one and could take us there the next day as part of a touristic tour. Yes!

We found some dodgy bugs under the bed of Aude during the night, and this cheap hotel was quite noisy, so first thing we did was to change hotel in the morning. Then we got picked up at 9am with Emmanuelle for an exciting day tour. Here was our cool car for the day:

The landscape in the Cameron Highlands surprised me a bit, as it is really cultivated. You can see all around those greenhouses in the plains. 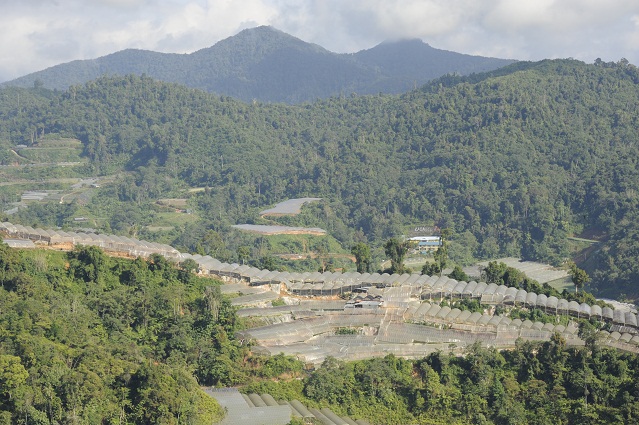 After an hour drive, we arrived at a place where we started walking. We were 22 tourists in total, but walking at a good moderate pace. It was a true jungle walk.

It was a real adventure, at some point we had to get down the hill, cross a small river and get up the little hill again.

We also had to walk above the river on some wood bridge: 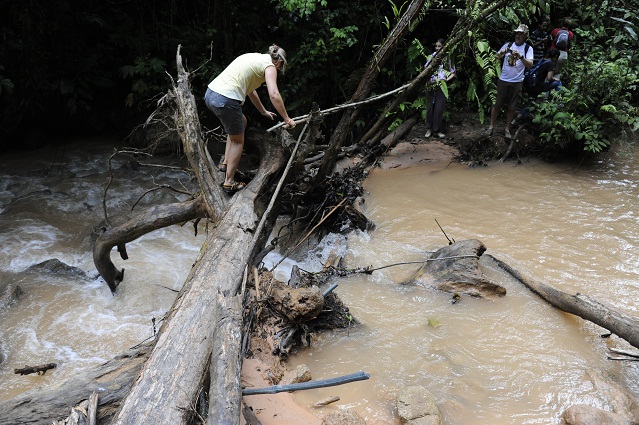 On that woodbridge, the 3 branches actually cracked under me and I fell! Luckily, one guy hold my arm at the last minute, and I put my feet on the rocks so I could come back to the land. Some little emotion. 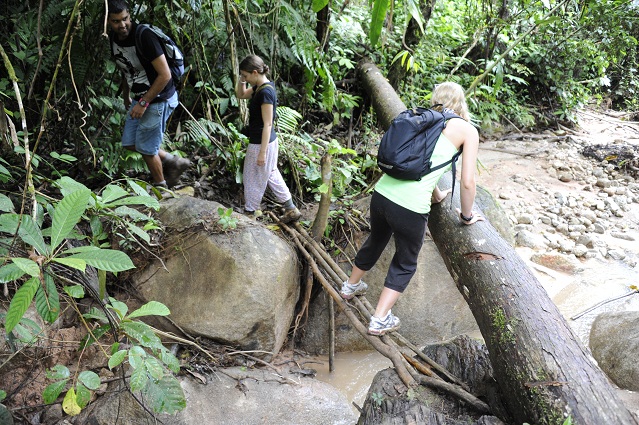 We saw a really cool spider on our way to the flower. 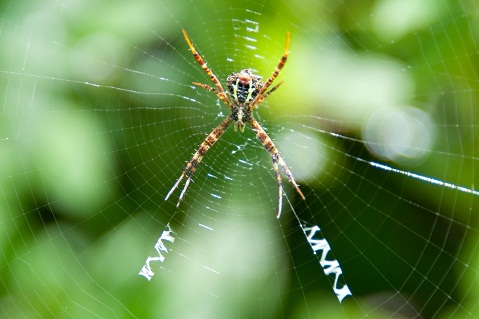 After an hour and half, we arrived at the rafflésia site. There were little flags on the floor to spot where rafflésias had bloomed in the past. It was a quite intense rafflésia-growing region. We saw one rafflésia bud which had not opened yet.

And here it was, the open rafflésia, since one day, gorgeous!

A rafflésia is a kind of mushroom actually, which is a parasite of other plants. It takes 20 months for it to grow and develop before to open. When it opens, it smells like rotten eggs for the first few hours because it releases all the gaz accumulated inside while growing. After that, it doesn’t smell anything anymore, contrarily to what people who haven’t seen it write or believe! Rafflésias can be found in 5 places only: Sumatra, Borneo, Cameron Highlands, Thailand and Philippines. According to Wikipedia, the first one was discovered on Sumatra by some French guy in 1791 but kept secret, and rediscovered by some British expedition in 1818, named after the surname of the chief of the expedition, Raffles. There are 28 species of rafflésias. The one we saw is either rafflésia arnoldii or rafflésia keithii. Read more about this fascinating flower here:

After seeing the rafflésia, we walked back. We got completely soaked. In French, we have an expression “se faire tremper jusqu’à l’os” which means getting soaked until your bones. That day, I literally understood the meaning of this saying, after spending one hour walking under a heavy tropical rain. I was getting a hydro-massage in my shoes each time I was walking, as were the 21 other tourists  and the 2 guides!

We took the road again and went for some Indian lunch and lots of Indian tea. After lunch, the driver took us to BOH tea factory. 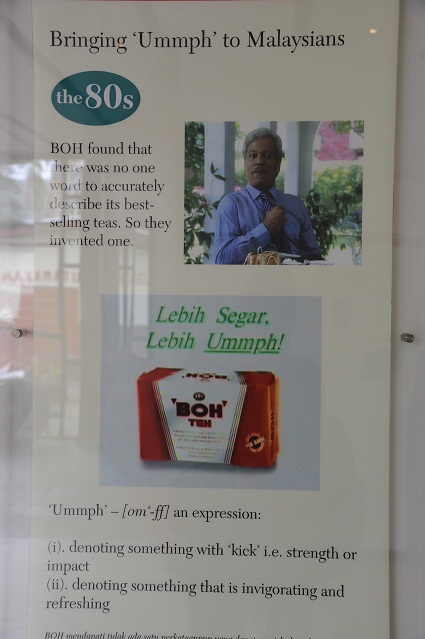 The landscape around of all the tea plantations was gorgeous.

Then we went to visit quite quickly a Butterfly and insects centre. The most common butterfly flying around there was this one. 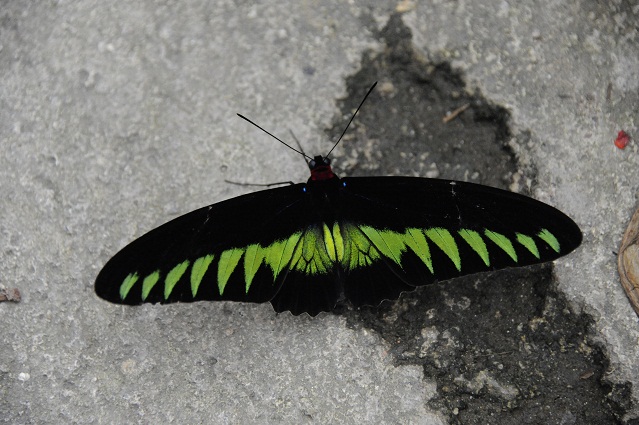 On the way back, we stopped at a strawberry plantations. Our driver was actually the son of the owner. Here he is with his mother.

I drank a delicious strawberry juice there, yummy! After that, we went back to Tanah Rata, had some diner and went to bed happy of this wonderful day. We saw the flower!!! Yuhouuu!!!

We took a bus to Kuala Lumpur in the morning with Aude, saying goodbye to Emmanuelle who was continuing her trip in the area, going to Ipoh. Our bus was really nice, with comfortable wide seats, the widest ones I have seen so far!

The road was turning a lot on the first part of the trip. We said good-bye to the beautiful tea plantations. 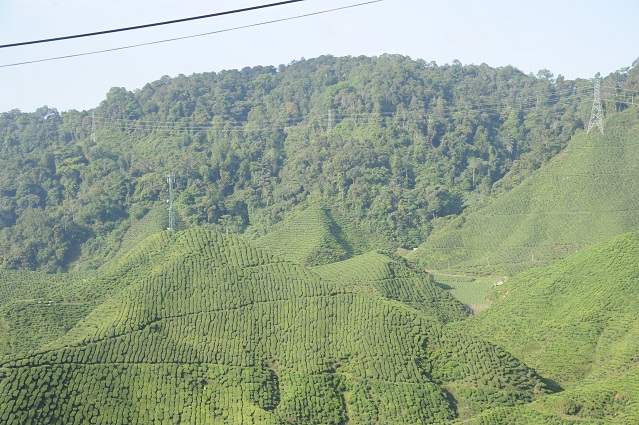 We arrived in Kuala Lumpur around noon, back to the big city.

We met again with Michael, left our bags in the hotel, went for some lunch, and then walked to the huge park nearby. We went to the Hibiscus garden, where I discovered a really cool hibiscus whose flower is actually made of 2 flowers.

On our way back, we ran into monkeys who were sitting on one of the street lamp.

We met in the evening with Achim, the friend of Michael he travelled with for the first part of his trip, and had some drinks together before a good barbecue at the same place we had enjoyed skewers the first time. Leaving Achim and Michael happily meeting again, we went for some wifi with Aude. It was then time to say good-bye, as Aude had a plane the next morning back to Brisbane. And as usual…I felt that time was again flying too fast. In a minute, she was gone. And as usual…I wondered if I had been dreaming, or if a close friend of mine had really come travelling with me, as did Anais, Neringa and my dad already. I am a lucky traveller, having friends come travel with me is part of the highlight of this long-term trip! Thank you friends!

So here we were back in Kuala Lumpur with Michael. While Achim was flying the next day to Labuan Bajo on Flores, we were staying here 2 more days, before to fly out there too!