It was Thursday, and I was going to Australia. It was Thursday, and my grand-father was being buried. What is the word you use to express this mix of feelings you can have at the same time in your mind, happiness and sadness, excitement and bitterness? My mind was split in two, one part was over there, far far away, with my family in France, for a last good-bye to my grand-father, and one part was looking forward to the big Wild West adventure, and to enjoy every single second of it, because you know, one day, we all die. We have just one life, ONE. And you never know when death will catch you.

So here we were on the plane, taking off at 9am, for a 3h40 flight with no time difference. The first hour and half was not really interesting. We were just flying above the sea. But the second half was astonishing. I couldn’t stop myself from shouting a big “Waouuuuu!!!!!” when I looked again out of the window and saw this:

Sadly, those pictures from the plane don’t do justice to the beauty of this place, and don’t illustrate correctly how it feels to fly above that landscape for an hour and half, neither do I find the proper words to explain. I felt this was the real Wild West, some red desert, completely empty. I couldn’t spot any houses on that ground. Gorgeous, astonishing. I really felt like flying above another planet. It was so different from anything I had seen so far that I couldn’t take my eyes off it for even a second and my mind kept wandering while my eyes were taking in this incredible scenery. There were those trees of ancient rivers that must have flown here millions of years ago. 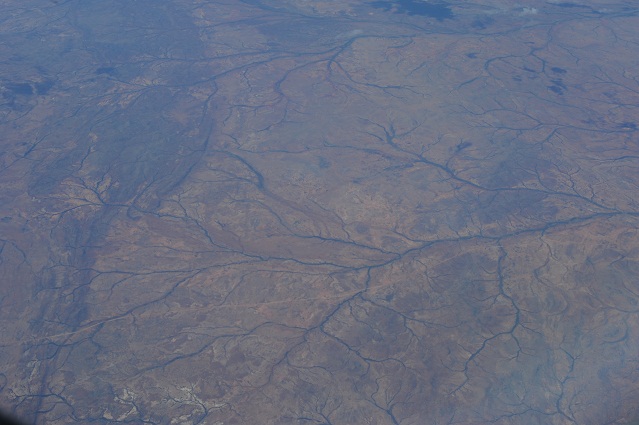 I tried to spot a road, and sometimes saw some. The tiny roads in the landscape, straight most of the time. That was going to be fun to drive, and scary a bit too. What if the car was breaking down in the middle of nowhere, uh? How did people do? 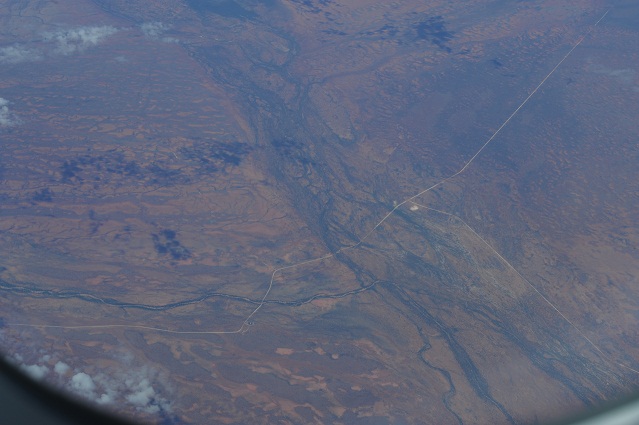 On the last part of the flight, there were those weird white rounds. Were these mines? Of what? And was the cross a landing for planes? How did this place work? 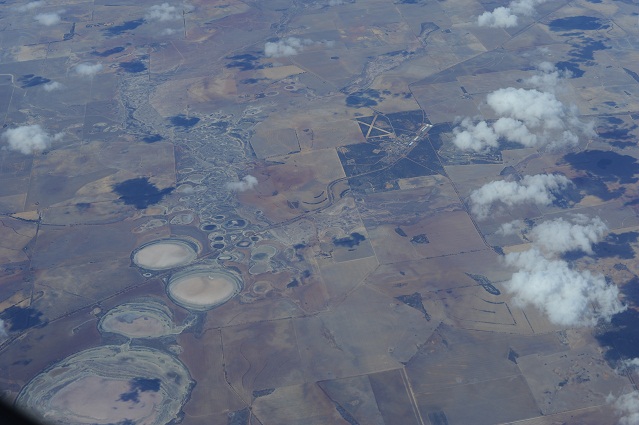 There was this lake also getting lost in the dust in the far far country. Which one was that?

And those lines of clouds from time to time, so perfectly regular that they didn’t seem to be natural clouds. Would it be possible that someone was creating them? So many mysteries around there!

At some point, there was in the sky this face with a hat which seemed to be smooking pipe and cigarette at the same time. Funny! All around him were cultivated fields and I could feel we were getting closer to places inhabited by people. 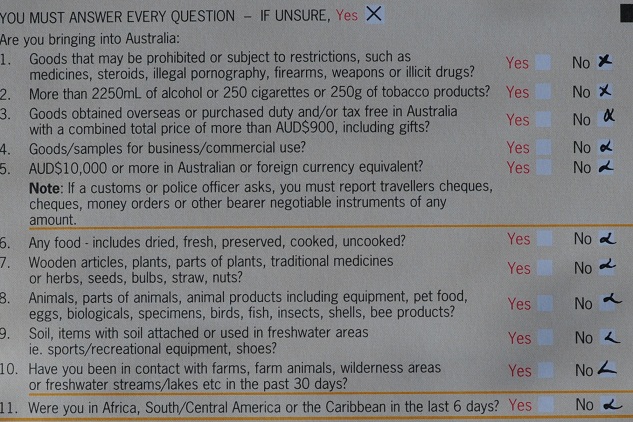 I had bought some wood sculpture on Flores, so I was hesitating. Should I say YES or not? I finally changed my answer for a YES. We would see what would happen…We finally arrived in Perth. We picked up the luggages, went to the passeport counter. The cool thing in Australia is that if you are travelling together, you go to the passeport counter together. They do that to speed up things. I have never seen another country doing that so far! Smart and friendly.

The woman wrote a Q on our landing card. Q like Quarantine. Instead of exiting directly, we went left. Another woman checked the wooden sculpture for holes in case there would still be worms in it. All good, no worms, we could keep it and now exit.

Here we were, in Australia, youhouuu!

Now, some size comparison, with that cool website mapfight.com. The United States are 1.05 the size of Australia, 1.25 if you include Alaska inside the US. 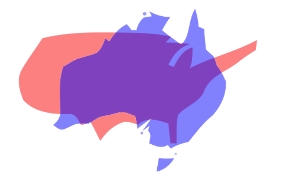 Australia is 32 times the size of the UK!

Australia is 12 times the size of France.

On this map, you can see where Perth and Darwin are.

First thing I did when exiting in the hall of the airport was to withdraw some cash and put some coins in this machine to buy some water.

And…It didn’t even give me back the right change! The bottle was supposed to cost 3.50 Australian dollars. So I put a note of 10 dollars, but instead of giving me back 6.50 dollars, it gave me back 4.50 dollars and with crunched coins on top of that!

Pffff…First hour in Australia, and I was already getting screwed up, and by a machine!! Ma euh!!!! We got on the bus and arrived at Perth YHA (Youth Hostel Australia) in which my friend Ralph had booked two beds in dormitories for us. Ralph is a photographer friend from Paris who moved recently to Perth. We arrived at the reception and bumped directly into him. Easy to meet again! I moved my bags to the 6-beds dormitory that costs 36 AU dollars per night. What a shock to be in a dormitory for so much money after 6 months in Asia spending an average of 3 to 12 dollars per person for a double room with en-suite bathroom! Here is how the room looked when I entered. Quite messy! 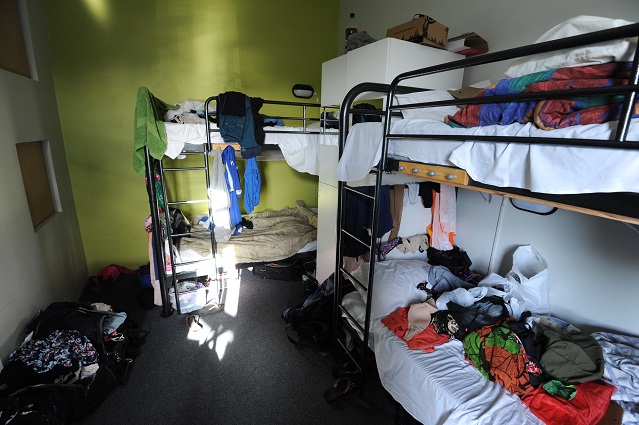 We walked in the streets where the weather was a bit colder than in Bali. Ralph explained us that Perth had been building massively the last 10 years since the exploitations of the new mines had really kicked off. He told me that he would like to be a miner, as once you managed to get hired as a miner, you could earn 500 dollars a day! Mining today and here is different from hundreds of years ago in Europe. They use more sophisticated equipment, fly in to the site, work for 3 weeks in a row and fly out, for 1 week of holiday. They do long hours but they are really well paid compared to the poor conditions of miners we had in the past. “Fly in fly out” is actually a common expression here to qualify this kind of work life. This is indeed the new America, right here and now. It was obvious that the buildings were brand new.

I couldn’t help comparing Perth to London when it came to its architecture. I really felt like being back there. This covered street for example reminds me a bit of some streets around Covent Garden, or even Carnarby Street itself. What a strange feeling to walk around.

They had also put some bsculptures all around the same way as in London. 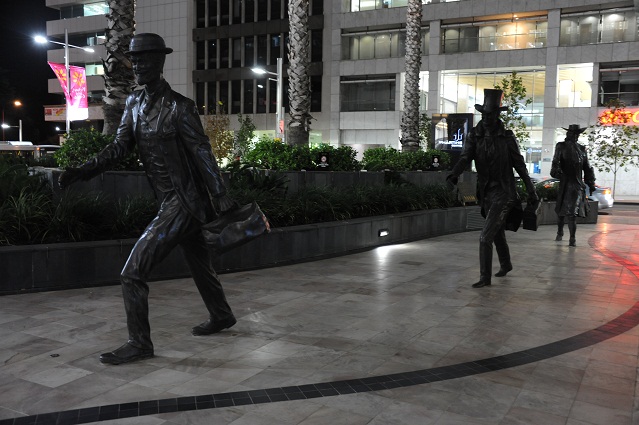 We went to the post office, then headed to the Swan Tower, where we were meeting Christian (nickname Chrissy), the friend of Michael who works in Germany as a sport journalist and had only 3 weeks off now. We met him and a friend of him living in Perth too and Michael and them stopped for some food while Ralph and me decided to wait to go a bit later. Then I bought an Australian SIM card, activated my new phone and used for a bit some free wifi internet with my netbook at a cool place called Peterpans. The German boys went for beers, while Ralph and me went for an Indian restaurant near the water called Annalakshmi.

It had an interesting concept I had not seen so far either. It offers an eat-as-much-as-you-want buffet with excellent food and at the end people pay what they feel like!

It was great to catch up with Ralph, as I had not seen him for a few months!

After that, we met again with the German boys in the pub. Ralph went back to the YHA as he was working the next day while we stayed a bit longer.

Friday 11th May From Perth to Cervantes

In the morning, we went out for a short walk around to buy some breakfast.

I discovered that the Australians call “Escargot” (snail) what we call “Pain aux raisins” in France (bread with sultanas). Quite cute and actually much more descriptive of the shape than our name! Why not! 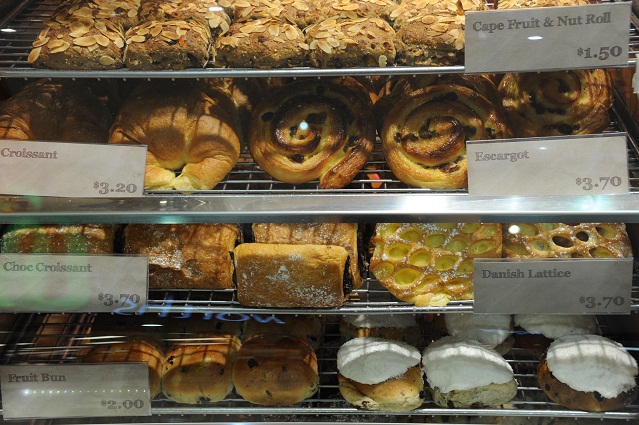 Then we came back, checked out and took 2 buses to the Wicked Campers headquarter. Even the inside of the bus looked like in London, and I kept having that strange sensation of being back there. It felt good and at the same time, even if I miss my friends there and family nearby I knew it wasn’t time for me to go back yet, as I was still feeling thirsty to explore much more of the world first! 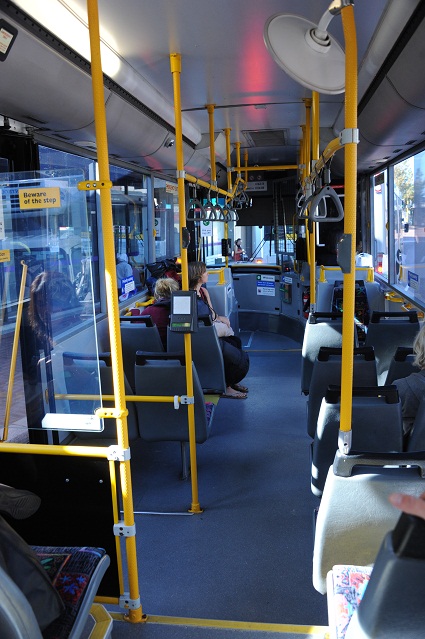 At the Wicked Campers headquarter, we met with Chrissy who had stayed in another youth hostel. Wicked Campers are very cool minivans, painted and always with a sentence at the back of it.

After a bit of waiting, we finally got our camper. Pretty cool! Our sentence at the back is “What has four legs and an arm? A happy pitbull.” 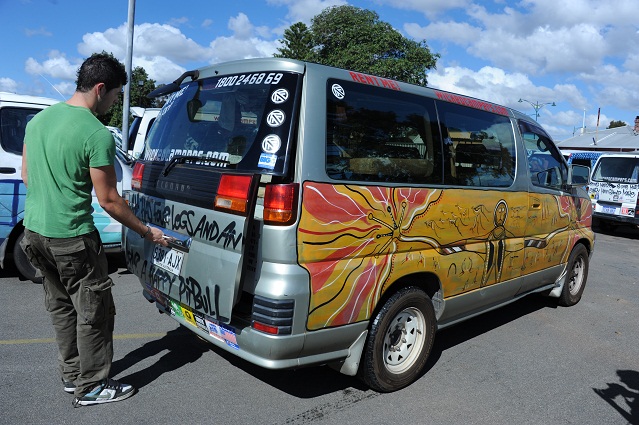 We took off and our first stop was at Coles, a huge supermarket, where we spent a long hour filling up the trolley with food. Total was 312 dollars for three, hopefully going to last for a week at least!

We finally took off from the supermarket around 3pm after a quick sandwich. There was a traffic jam on the first part of the road, which sounded a bit weird to Chrissy who had been in Australia five years ago, from Adelaide all the way to Cairns on a 6-month road trip, and had only encountered a traffic jam once in Sydney.

Luckily, this little traffic jam was over once we took the road on the left in the direction of Levantin. It’s at that moment that we felt that our road trip was really beginning! Yihaaaa!!!!

Here is a picture of the road.

We drove for about 3 hours up to Cervantes which is 250 kilometers north of Perth. Here is a picture of that part of the map. You can see on it Perth, and further North of it Lancelin, then above Cervantes, with Nambung National Park on the east of it.

The landscape was interesting and changing, from forest to plains with a few trees. The most incredible thing was the sunset. The sun sank behind the horizon from half-sun to totally gone within 30 seconds only! This was the fastest sunset I had ever seen in my life! 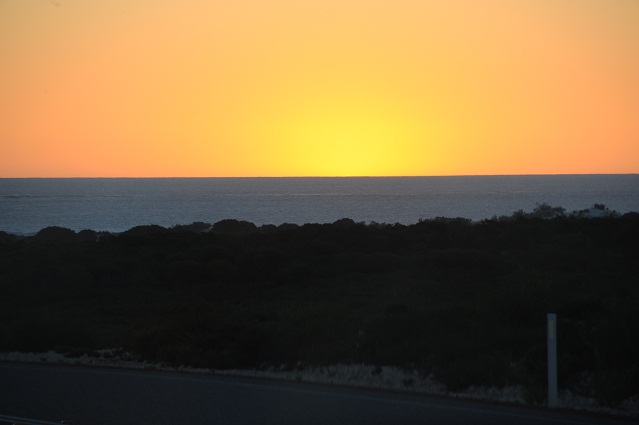 The sun was already completely gone!

On the road are three kind of wild animals to be careful of: kangaroos, emeus and echineas, a kind of hedgehog. We saw our first emeu already that evening, crossing the road. Chrissy was driving and had to stop quickly to not hit it. It went away too fast for us and we didn’t take a picture sadly!

Later we saw some pure white sand dunes on our right. It was really magic and unexpected.

Here is the first of a series of a few pictures of “Our wicked camper on the road”. 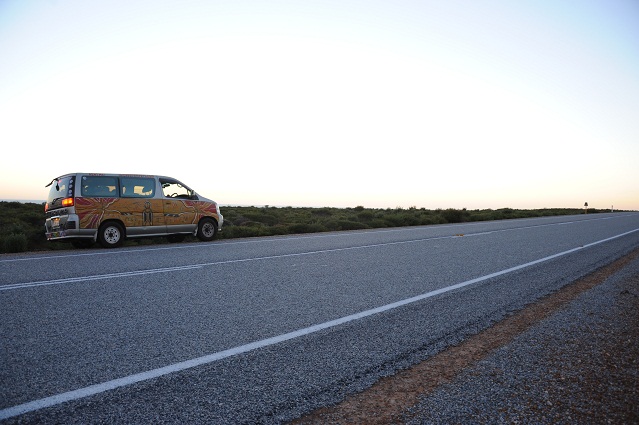 Night fell and we arrived in Cervantes, where we went to a camping site to park our camper, use the kitchen and shower facilities and make our bed inside the camper by putting flats the three wooden boards and on top the four thin mattresses. Cosy and cheaper than dormitories! Second night in Australia, first night of our road trip!

Tomorrow…Let’s go to see the Pinnacles, in the Nambung National Park!