We left Brisbane around 4.30pm, got stuck in some traffic jam, and got to Hervey Bay around 9pm.We stayed at James’ place from Airbnb and had a good night sleep. Here was the journey from Brisbane to Hervey Bay. 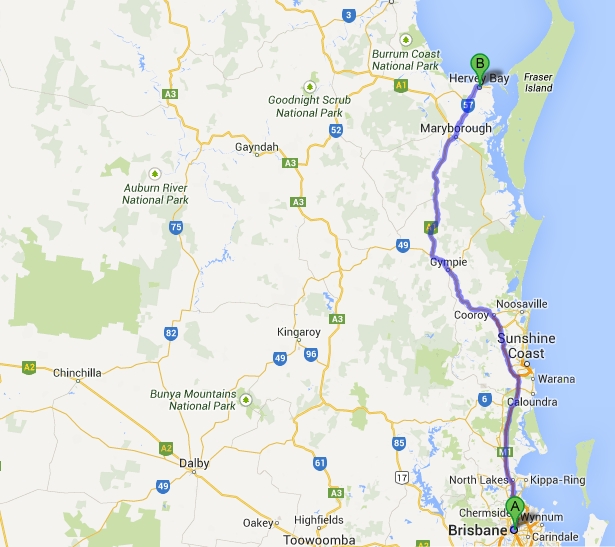 We woke up at 5am and we were at Fraser Magic around 6.15am in time to watch the Fraser video for an hour, and pick up the keys of a Landrover Challenger we rented with them for 3 days. Then we headed to River Heads and got the car on the ferry of 8.30am.

On the 30min journey to Fraser Island, we saw 4 pirate terns on their raft which seemed pretty desperate to get to some land. At least they were dragging their mineral water which meant they could afford a couple more days before to arrive somewhere. 🙂

They reminded me of the pirates whose boat Asterix and Obelix always love to sunk and who always finish on a raft too. 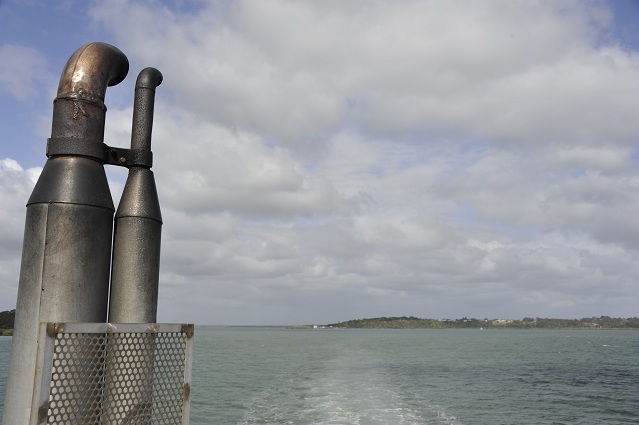 The journey was pretty boring. Tons of micro islands which were really flat. At least some beautiful clouds in the sky.

After 30 minutes journey, we got closer, and we could see the disembarkation point on Fraser Island.

Fraser Island is the largest sand island in the world. It’s 120 km on 24km, while Malta for example is 27km on 14km, so it’s 6 times the size of Malta. Playing a bit with the maps on google, here is what a comparison looks like. 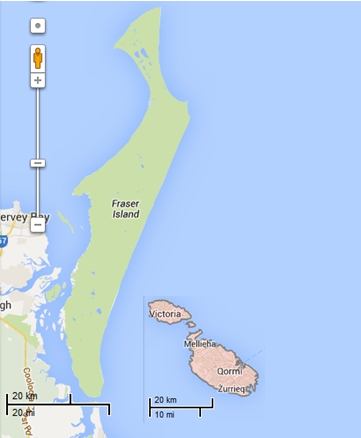 It’s also called K’Gari, which means “paradise” in the language of the Butchulla people, the traditional owners of the land.There are two interesting anecdotes about Fraser Island.
The first one is its legend about the way it was created.

According to Aboriginal legend, when humans were created and needed a place to live, the mighty god Beiral sent his messenger Yendingie with the goddess K’gari down from heaven to create the land and mountains, rivers and sea. K’gari fell in love with the earth’s beauty and did not want to leave it. So Yendingie changed her into a heavenly island – Fraser Island.

The second anecdote is how K’Gari became known as Fraser Island. In 1836, Captain Fraser and his wife Eliza were on a ship going from Sydney to Singapore. It got holed on coral while travelling through the Great Barrier Reef. The passengers went into 2 lifeboats and tried to reach Moreton. During that journey, Eliza gave birth to a child on the lifeboat but the child died soon after birth. The boat started to sink and they had to stop at this island they didn’t plan to reach. Captain Fraser died, Eliza was left with the locals, and rescued 6 weeks later. Her name was given to the island and so it is that K’Gari became also known as Fraser Island. Thanks Wikipedia! 🙂 More info here: http://en.wikipedia.org/wiki/Fraser_Island

When we got to Fraser, the first thing we did was to deflate the tyres, so we could drive in soft sand, from 32 PSI to 26 PSI for our car.

Here we were, after just 5 minutes drive, indeed, driving right on full sand on the track!

Here is what we did that first day: We arrived in Wanggoolba Creek, drove to Central Station, then to Eurong, then on the beach we drove North, to Eli Creek. Then we went to see the Maheno wreck and the Pinnacles. Then we drove to Cathedral on Fraser campground where we stayed for the night.

At Central Station, we only stopped at a table to make a coffee and get some “second” breakfast. We didn’t do any walk, even the 20minutes boardwalk, too tired that morning for that. But at least, we saw our first dingo! It was pretty exciting even if dingos just really look like dogs.

After this revival coffee, we drove to Eurong and got on the beach.

We spotted three real cool birds, Cattle Egrets, as soon as we got to the beach. Funny enough, I didn’t see these birds again afterwards. 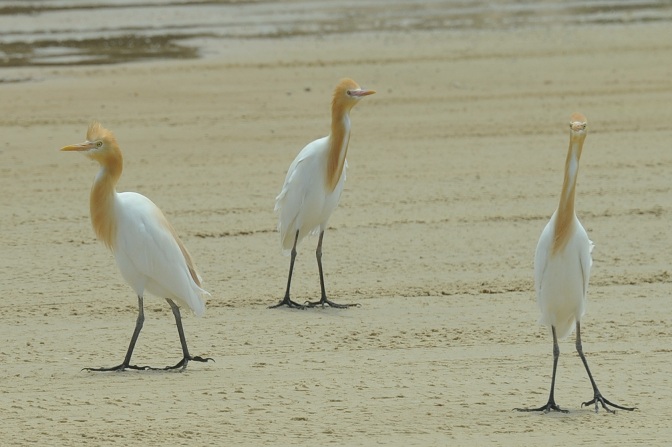 The drive on the beach was really great. So few people. Beautiful line of horizon. 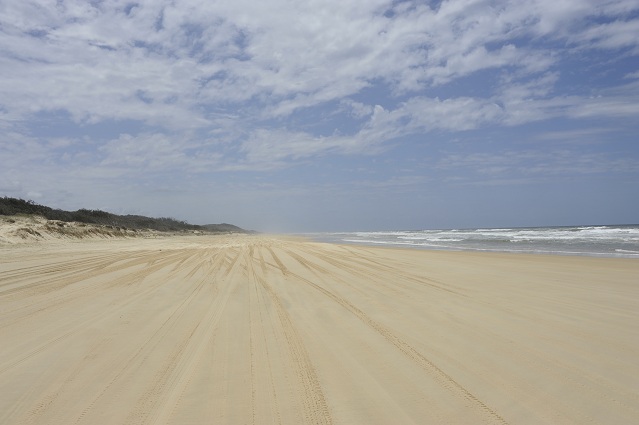 The one thing we noticed really quickly was that there were a lot of dead birds, hundreds, thousands of them on the beach.

Some of them were still alive but looked totally exhausted, incapable of moving even a centimeter away from where they were.

We were really puzzled. Were they victim of some petrol disaster in the sea? Did they die of a certain disease? What has happened to so many of those birds? I had never seen in my life thousands of birds dead on a beach, kilometer after kilometer. And that beach is pretty long. It’s called 75 Mile Beach. From Eurong to Cathedrals on Fraser campground, there is 38 kilometers of beach to drive! 38 kilometers of dead birds..Imagine!

It’s when we got to Elie Creek that we got our answer on one of the explanation board.

The fact that this board describing that phenomenon had probably been up there for a couple of years already showed that it wasn’t the first time it happened. So here we had the answer. These birds were short-tailed shearwaters or mutton birds, and they were migratory birds. They had flown thousands of kilometers from the North, Japan, maybe Russia this time, who knows. They had arrived exhausted, a majority of them just making it to the land to die almost immediately afterwards. What a tragic destiny for so many of them.

When I talked a few days later with some friends about this, they told me that it had not only happened on Fraser Island. A friend of mine told me he had spent a week on Stradie (North Stradbroke Island) at the same time as we were on Fraser, and he had seen these dead birds too. Other travellers I met a week later told me that they had seen these dead birds in Byron Bay even a week before we were on Fraser. When I visited my Australian cousin in Lota, she showed me an article in the local newspaper talking about them. While searching on google “mutton birds dead”, I found tons of articles, talking about their death in all parts of Australia, in Middleton Beach near Adelaide, or from Coffs Harbour to Tasmania for example.

These articles were pretty interesting!

Welcome to the fascinating world and particularly fascinating journey of the mutton bird!

We got to Eli Creek which is the largest freshwater stream on the island’s east coast. There you can walk for about 10 minutes on a little path, and then get down some stairs to the stream of fresh water. It’s funny to think that an island in the middle of the ocean can have fresh water streams in its centre.

From there, you can either let yourself float to the sea, or just walk to it like these people do.

And you get here: 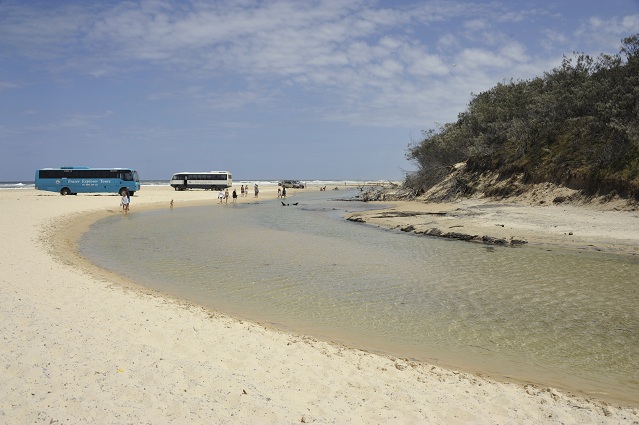 Then we drove in the direction of the Maheno wreck. On the way, we spotted a white-bellied sea eagle flying over. 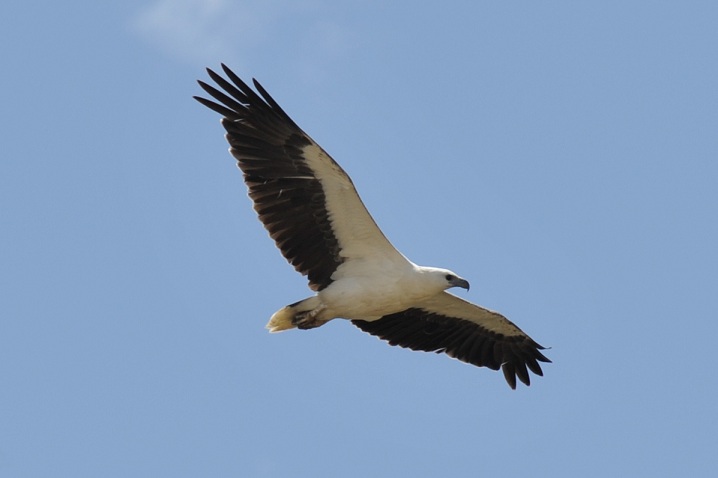 We also saw some crested terns near the sea.

We got to the Maheno wreck.

SS Maheno was an ocean liner from 1905 to 1935, carrying people between New Zealand and Australia (mostly Sydney and Melbourne) on a regular schedule. It was also used as a hospital ship by the New Zealand Naval Force during World War I. This boat could carry up to 420 passengers! In July 1935, it was being towed by the ship Oonah and were heading to Japan, as both ships had been solved to an Osaka shipbreaker. The ships were linked by a wire rope and the Maheno didn’t have propellers. The ships got hit by a severe cyclone, and the rope broke. The Maheno drifted off and disappeared, with 8 men onboard. A few days later, they found the Maheno beached off the coast of Fraser Island, the crew camping onshore. They stripped the boat from her fittings, but couldn’t refloat her so left it there, as there was no buyer interested.

This boat as a wreck was really beautiful too. 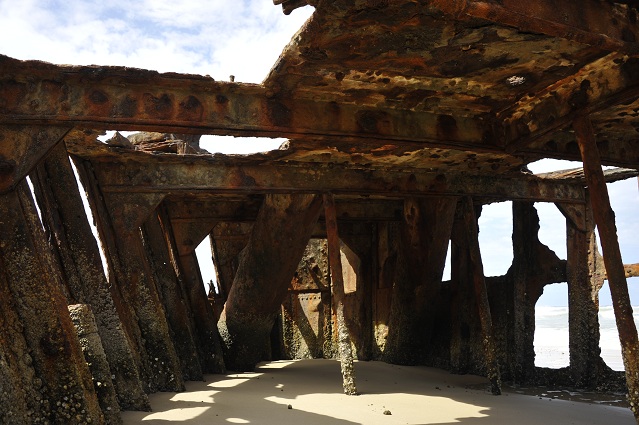 The rust especially made it really colourful. 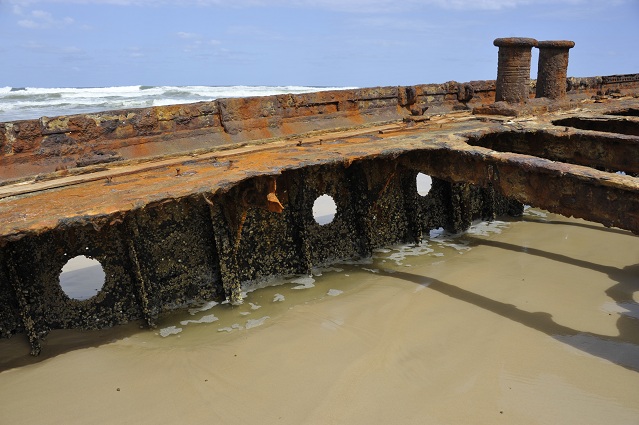 Imagine standing here at the time.

We could even see faces, like ghosts of the past.

And some really colourful crabs hanging around it.

Then we drove to the Pinnacles.

Nearby there was another crab, but this one with paler colours, called ghost crab.

I wonder if it’s this crab which was making these little sand balls. These sand balls are so fragile that it’s impossible to hold any between fingers without seeing them disintegrate! 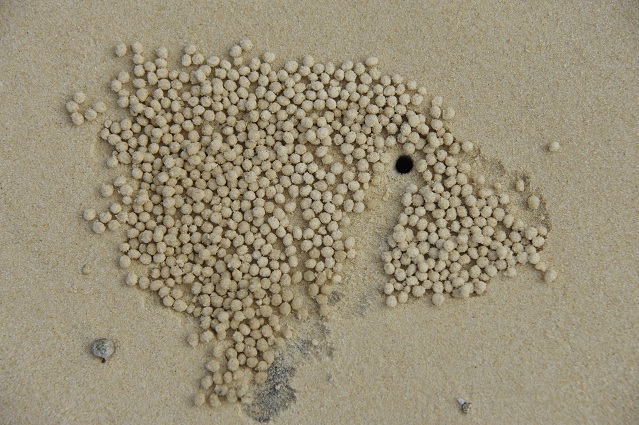 Near the Pinnacles, we also saw a white-faced heron, walking slowly, its eyes fixed on the ground. 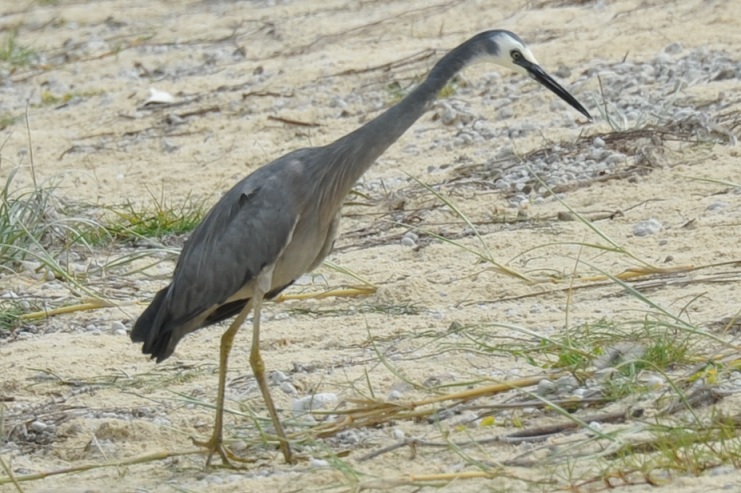 Next to him was this tiny bird, a red-capped plover, running like crazy, in comparison!

It was magic for us to be alone there, with no tourists in sight. No cars in sight from where we came from: 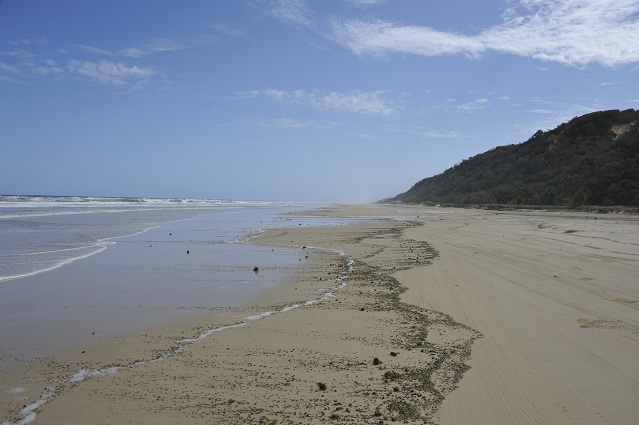 No cars either where we were heading.

We arrived in the late afternoon at Cathedrals on Fraser campground. It was funny to see at the entrance this contradiction. 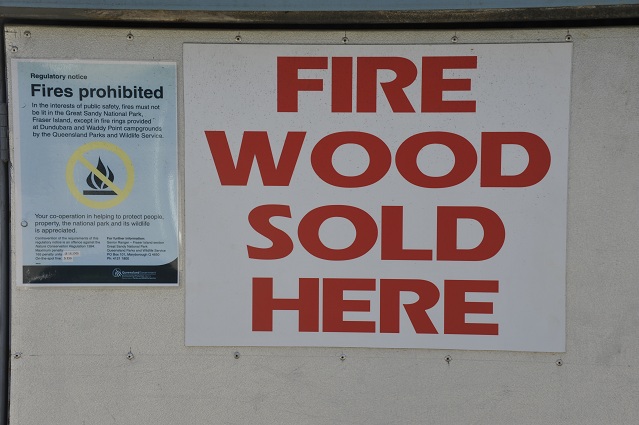 We were welcomed at the reception by Sarah, a very dynamic girl who told us a bit about the dingos which were hanging around at the campground and the monitor lezards who could be 1 meter long and a bit nosey, so better close our tent. The tents were really comfortable, with a real bed in them. 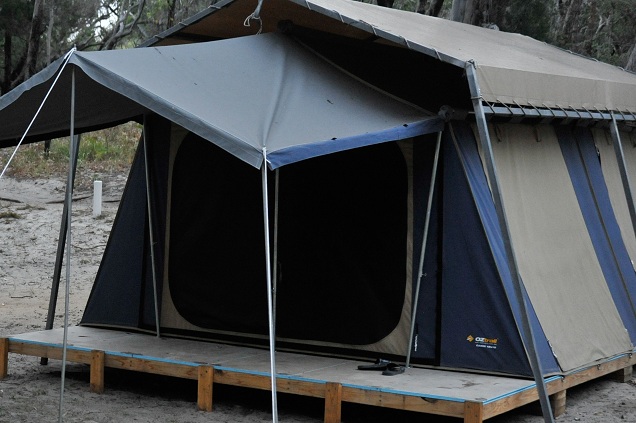 We went for a walk from the end of the campground to the beach.

We didn’t see any monitor lezard but we saw some prints showing there has been one walking here a bit before us. 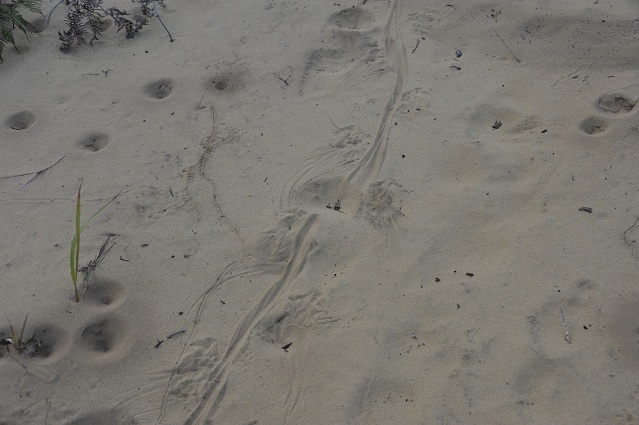 In the evening, there was a sign in the kitchen telling us about all the possible snakes we could see around.

We saw that head which looked a bit like a snake.

But in reality, it was just a small lizard, a major skink (Bellatorias frerei) walking by.

And here we were, at Cathedrals on Fraser, North-East of the island, for our first night sleep there!

Thanks again so much to Robert Ashdown for helping me with the names of birds and animals.
Check out his blog here: http://www.robertashdown.com/blog/