On Wednesday after work, I took the plane from Brisbane to Sydney in the evening, walked 20 minutes from the airport to the Ibis hotel where I met my parents around 10pm and where we stayed for the night.  On Thursday, we woke up early and got a shuttle at 6am and the plane of 7.20am with Tiger Airways to Alice Springs. The flight covered a distance of about 2,700km and we landed in Alice Springs at 9.20am. In winter, that’s 9.50am in Brisbane and 10.50am in Sydney!

Here is an idea of the distance covered.

The plane from Sydney to Alice Spring flew over a fascinating landscape, as fascinating as the first Australian landscape I had seen from the plane 18 months before when flying from Bali to Perth.

We could see some open-cut mine from the plane. 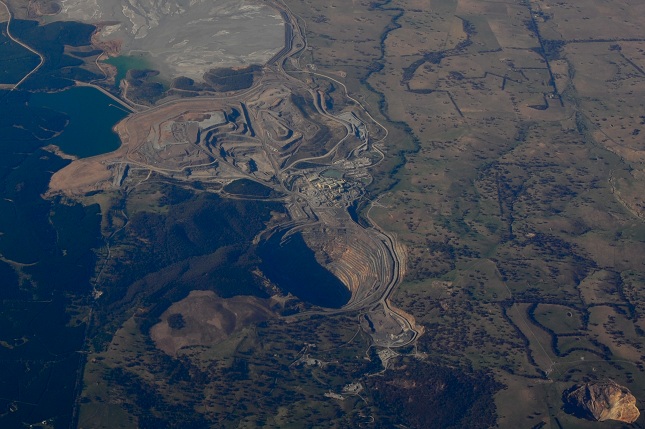 And then the beginning of the Outback, still green at first, but where we started to see less and less roads.

We could see lots of mysterious ancient lakes, probably dried out. 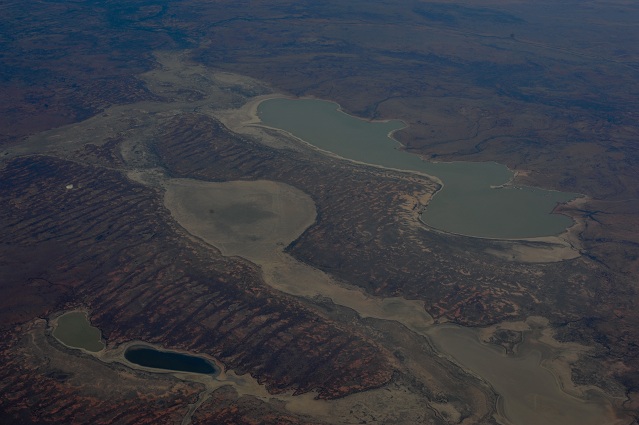 As well as a lot of ancient rivers, which were probably flowing 25,000 years ago.

The landscape looked more and more like the one of a red moon, full of meteorite craters. 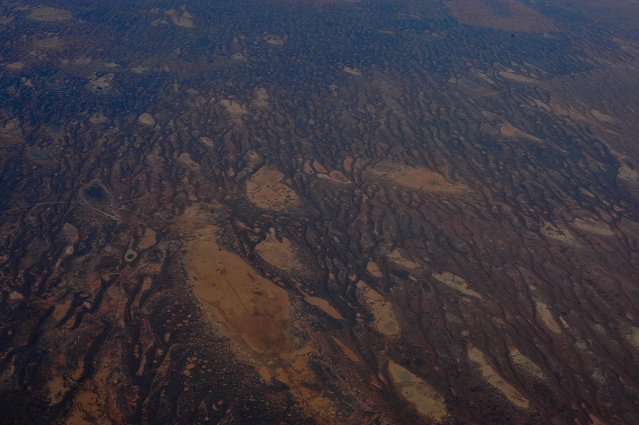 Sometimes we could see little squares, cattle stations in the middle of nowhere.

And these 2 lakes on the way, blue, which seem to have water. What are their names?

And more and more dried lakes, white lakes, white because of salt from the sea which was covering the continent million of years ago? 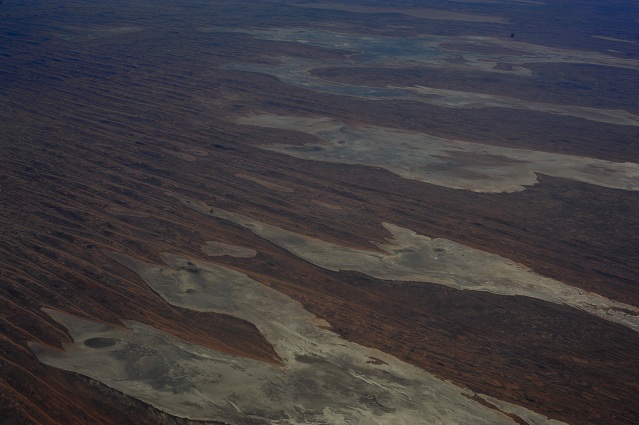 Towards the end of the flight, we saw some beautiful range of mountains.

A dried landscape with that one winding road. 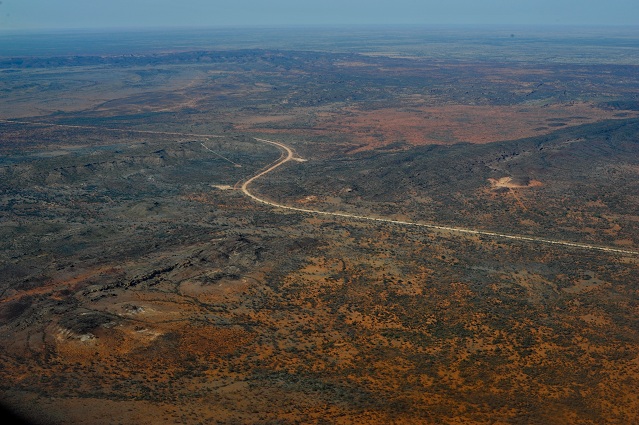 And here we were in Alice Springs.

“The area has been inhabited for at least 30,000 years by Aranda Aborigines who moved between the waterholes of Alice Springs (Tjanerilji) and other reliable water sources in the MacDonnell Ranges. But, as elsewhere in The Territory, it was only the Overland Telegraph Line’s arrival in the 1870s that led to a permanent settlement here. Following John McDouall Stuart’s exploratory journeys through the area in the early 1860s, it was the visionary Charles Todd, then South Australia’s Superintendent of Telegraph, who saw the need to link Australia with the rest of the empire. The town’s river and its tributary carry his name, and the spring that of his wife, Alice.”
Copyright Rough Guide.

The first thing noticeable at the airport was the Quarantine Bin located just after we got off the plane, and reminding us about the particularity of Australia, where the states try to protect the land from unwanted seeds.

The carpet of the airport represented some beautiful Aboriginal drawings and put us right into the atmosphere of the central Outback. 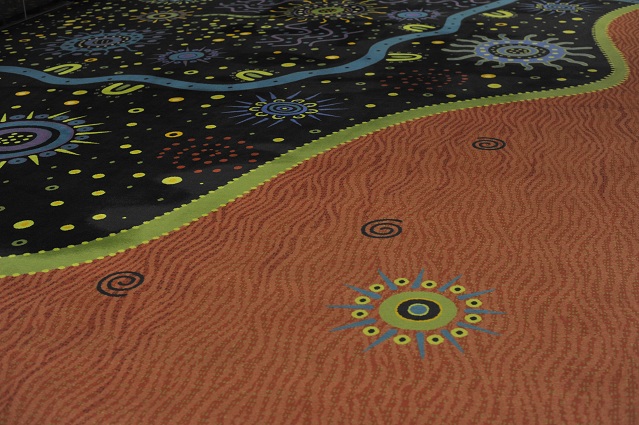 While waiting for the bags, we had time to read some of the papers on the information board, and they were pretty interesting, telling us about that feral cat: 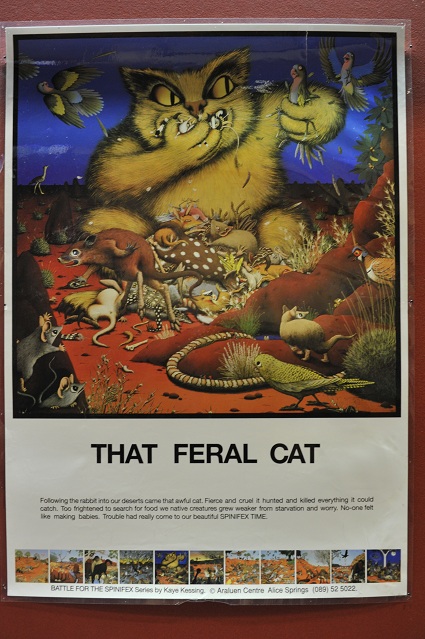 And the feral weeds we should pay attention to in order to not spread them around even more.

We also learned that Alice Spring is one of the 7 Solar Cities of Australia. In September 2010, the company SolarFocus completed the installation of 28 solar arrays of 8 metres wide by 7 metres long, using Concentrator Photovoltaic (CPV) technology which can track the sun rays all day and absorb more solar energy in a smaller cell, also using materials such as glass and steel. Since 2010, Alice Springs Airport has been receiving about 25% of its power needs through these solar panels. 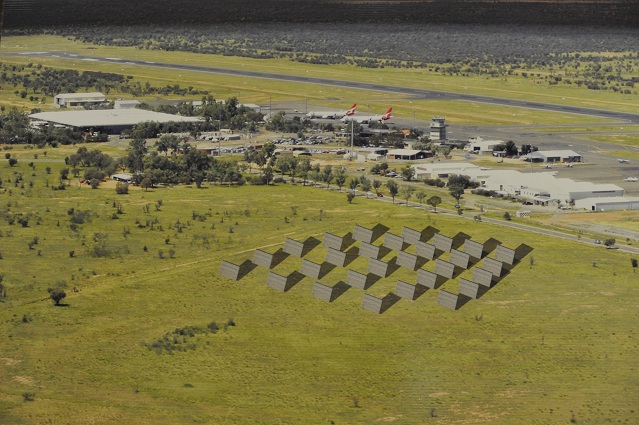 New solar panels will start being constructed in March 2014. “The additional 996 panels, which will cover half the existing long term car park, will more than double the airport’s capacity to produce its own power and will offset the equivalent of 420 tonnes of carbon dioxide emissions per year.”

After picking up our luggage, we were off in a taxi from the airport to the city to get some cash as the commission taken if paying by card at the rental company would have been about 50 dollars! On the left there were some beautiful little hills when we approached Alice Springs.

In the city, we saw in a few places some Aboriginals sitting in some of the grassy areas. 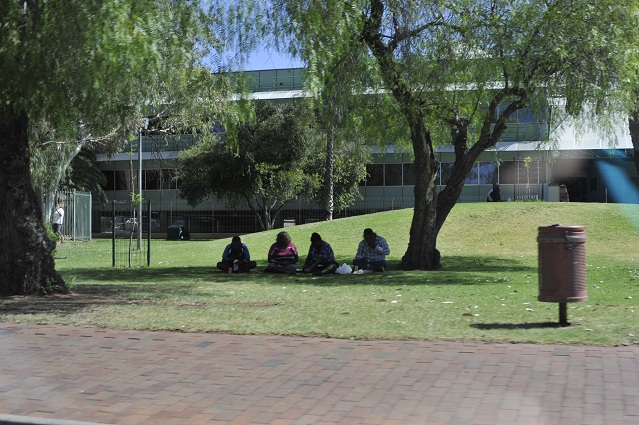 I had seen a lot of them too like this when road-tripping between Perth and Darwin the year before and they still made me ponder as much as before. We don’t see that many around Brisbane. I am still really curious about them. How do they make a living? Where do they sleep? Are they just visiting by but still able to live in the bush according to their own culture? Do they still speak their language or only English? Or are the ones we see on this picture some of the last children of the Stolen Generation, or children of these children? The Stolen Generation period is that period between 1930s and 1970s when the White Men thought that stealing the half-cast children and teaching them the White Way would ‘make them better’. Half-cast children were children born from an Aboriginal woman and a White man. This was a period of time where the crazy ideologies of race superiority were considered ‘the right thing’ in many places of the world, and some of the White people who came to conquer Australia were thinking that way too at the time. So, what is their story? Still pondering. One day, maybe, if I have more time on hand, I will try to figure that out myself. But not today.

We got to Britz where my parents picked up a fully-equipped 4WD for their 10-day road trip to Adelaide, lucky them. 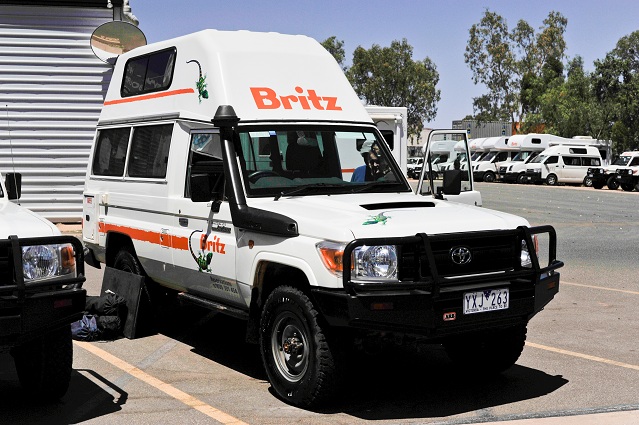 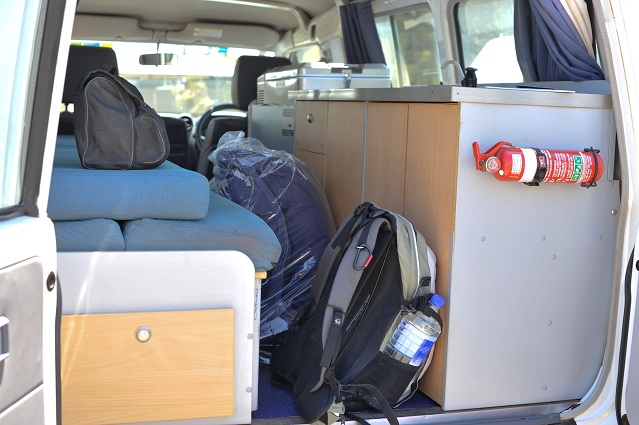 Next we went to Coles to buy food for a week. There was a beautiful graffiti drawing on the walls. 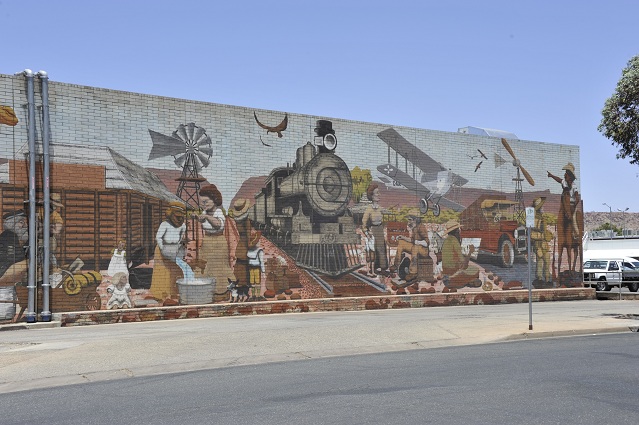 The town was pretty flat.

But had some nice shady alleys, who knows, maybe that one is the equivalent of Brisbane’s Queen Street? 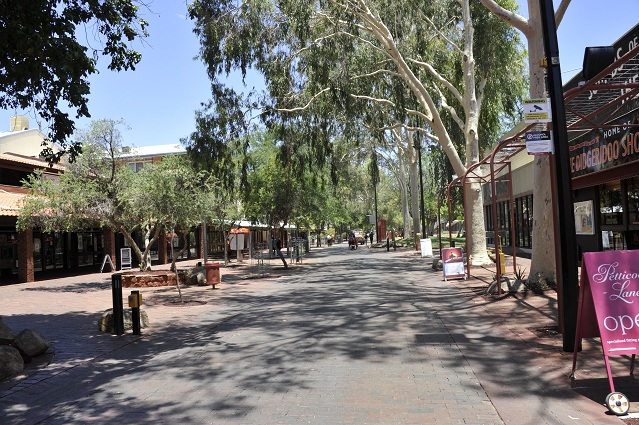 As it was 42C degrees (hot!!!), there were definitely not that many people around! I saw briefly the ‘Historical Heritage’ monument of the city, the Town Gaol, which was built around 1908 and served until 1938 as a prison for people who had committed crimes such as horse stealing, passing dud cheques, or misuse of cattle brands. 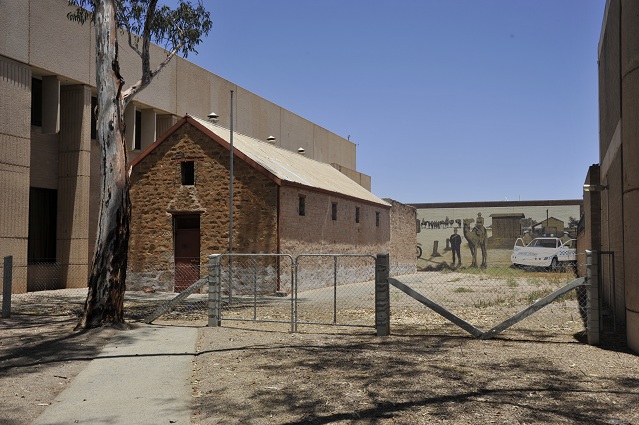 But, mmm, naaa…The car was pulling to the left. So we went back. Spent some time at Britz to get another similar car and transfer all the stuff in there. While chilling out there again, I saw a bunch of Miner birds and Pee-wees like we have around Brisbane but also some Port Lincoln Ringneck parrots like this one, which is a bird I haven’t seen around Brisbane, which seems to be more typical from there.

And finally, on the road again on the Larapinta Drive, this time for good…around 4pm! Off to Glen Helen!

Here was the itinerary we were about to do.

First step would be Glen Helen and we had about 2h left before sunset, which was good, as in the Outback, you don’t want to drive after dusk if you can avoid it. Too many kangaroos waiting to jump on the road under your wheels as soon as it’s dark! Picture of the range on our left. 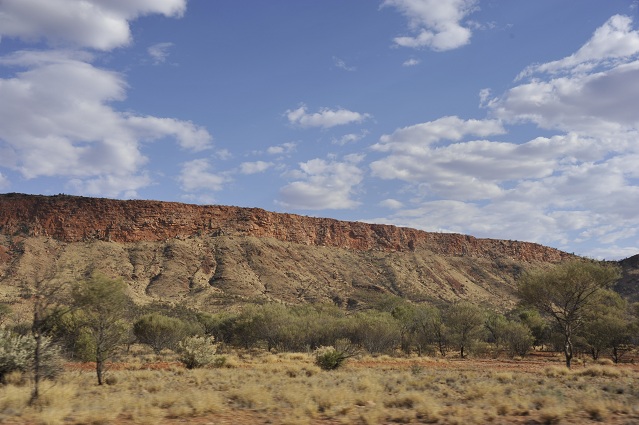 Here was the list of all the scenic things we were about to miss. Oh well. I will have to come back! 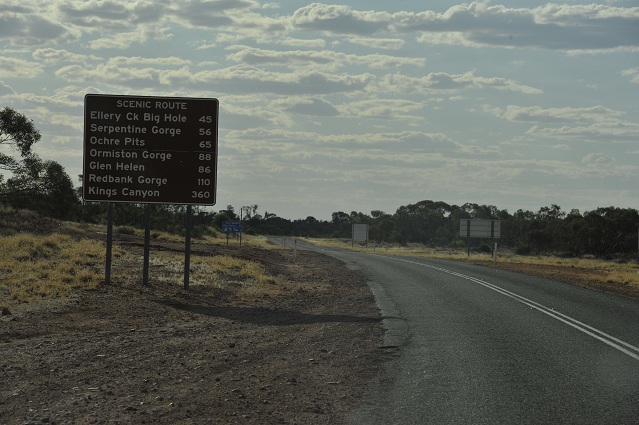 The landscape was really beautiful. 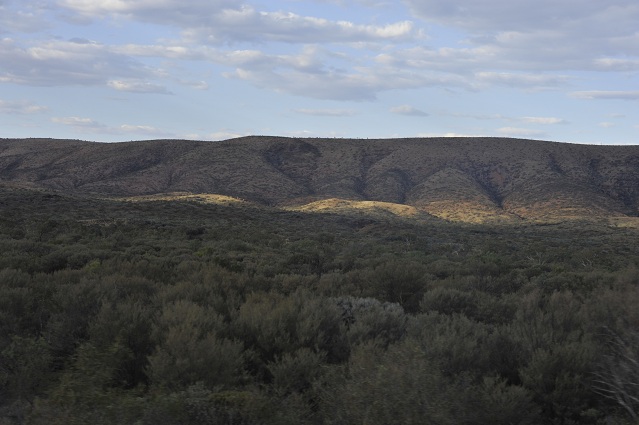 And here we got to Glen Helen Resort, the one only ‘hotel and campground’ around, 1h15 drive from Alice Springs, where we stopped for the night.

There are some 1-min audio files worth listening to.  Each tells you a bit about each place of the Centre Way. The ones about Glen Helen tell about ancient Aboriginal stories, how the Rainbow Serpent created Redbank Gorge, how the death adder snake protects the ancient water, how the Moon Man met with the dancing women, how to find water and which plants and berries not to eat. It also tells about the recent White presence, how the explorer Ernest Giles discovered Glen Helen, and how difficult it was to travel at the time, and how it was to live around when the first station owner Brian Bowman and the second one Fred Raggatt were around. Quite interesting!

I pitched the tent but didn’t put the cover on top because it was so hot and there was no wind. I regretted during the night when the wind started and blew like crazy and almost unpitched my tent! It felt like a huge storm was coming, but it didn’t finally!