We had some brekky, for me dry granola in a bowl and an apple chopped in chunks, Juan Carlos preferred bread ham and cheese, we packed the tent and then bags and started walking around 8.30am.

My first picture of the day.

We went up towards Pulpito del Diablo first but then turned left and went down.

Plants you can find there.

The weather was really misty and I started having a headache which became stronger and stronger the entire day. Nice. Where we had slept was at 4,500m high and where we were walking and going to sleep was the same altitude. I feel that I just didn`t drink enough water, but drinking more means going more to toilets in the cold, it is not motivating!

The walk was mostly on rocks. It did feel like being on another planet. It was also extremely windy all day that day! Who knows which wind speed? 60 to 80 km per hour? Sometimes I was actually happy to have a 15-20 kilo bag on my back which kept me on the ground! 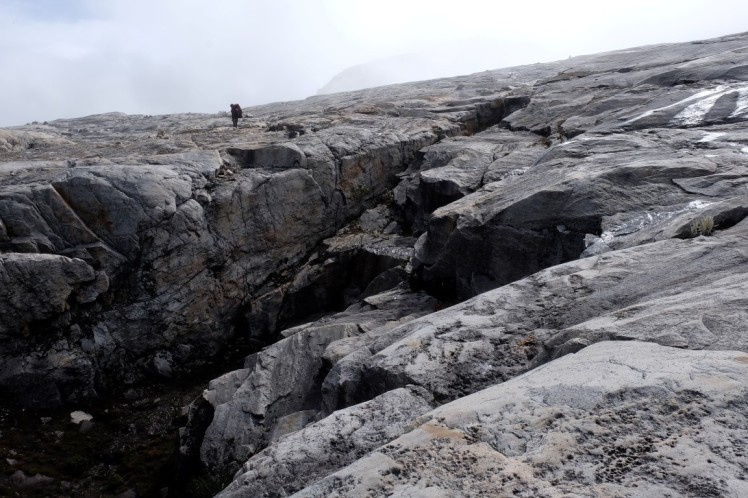 View down to the valley from there.

Yes, a selfie. Me watching the view! 🙂 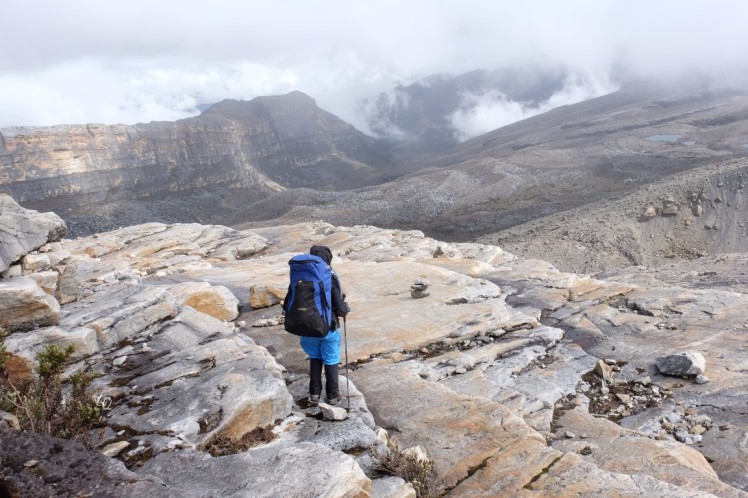 Going down a bit.

Walking towards the lakes and snow. 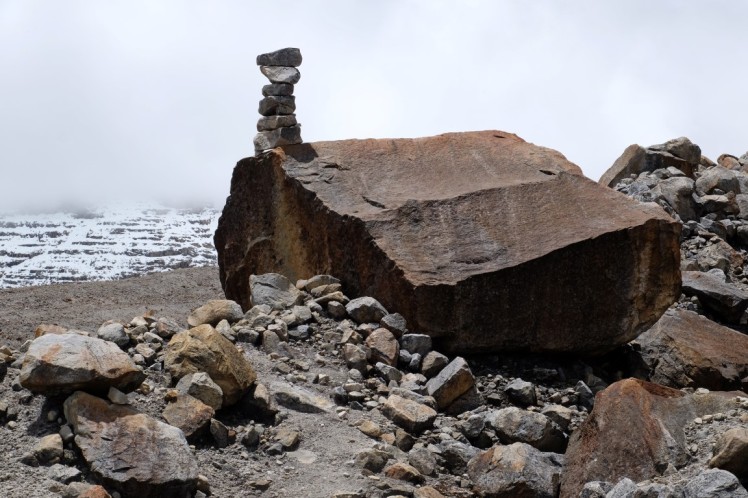 The other face of Pulpito del Diablo and a lake in the foreground.

We walked around this lake. 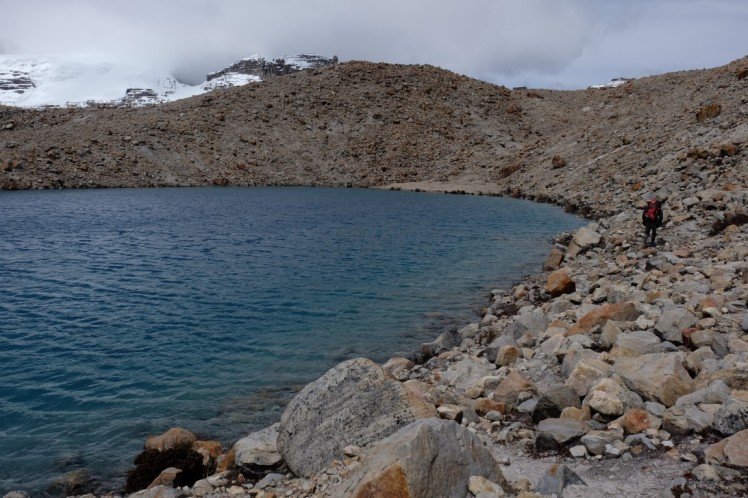 At some point, there was this crossing I didn`t really like! Fall in the water and you are screwed!!! 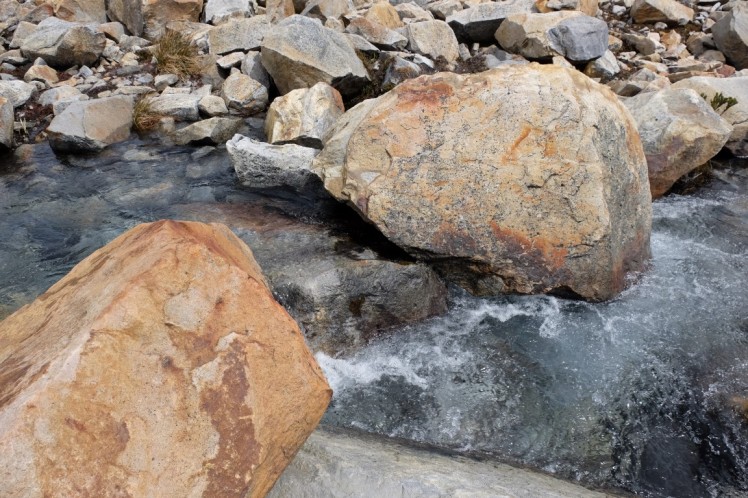 Here we go, getting there, Laguna Grande de la Sierra. With a massive headache.

I arrived, pitched the tent and rested for a few hours. It helped and my headache went away. There was another group there of a French couple and 2 Colombian sisters from Bogota and 2 porteurs and a guide. In the evening, we shared our bread, cheese, ham, Minca leaves and stove and bottle. They transferred the thinner to an empty bottle and put white gas in my bottle to use as a second stove to cook the dinner. They explained to me that to get white gas I needed to go to petrol station and ask them to fill my bottle with gasolina extra or gasolina corriente. Hein hein. Right. Learned something at least. Let`s hope it works like this too in the other South America countries! They prepared some warm dinner for all of us, and I realised how important having great food, in particular warm food at 4,500 m high  after hiking 5 to 8 hours a day, was so important. Forget about the easy crappy plastic bread, cheese and crap ham, better get noodle soup and spaghettis, hot chocolate, coffee and tea! It really made a difference to eat well that evening!

While we were eating, an awesome rainbow came, and I used the 12mm wide lens to fit it fully in the camera, above my tent. I love this shot! 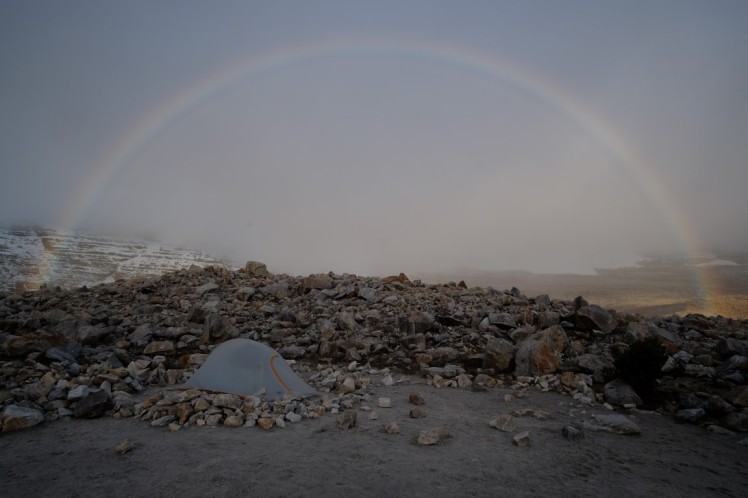 Sunset on the right side of the lake

I did some one second exposure while putting the camera on the rocks. I could not bother getting the gorilla pod at that dinner time.

In the evening, everyone was into experiencing night time shooting, and it was very nice to use my camera while chatting to all. Here is one shot I got of the stars. The full moon was hiding behind clouds. 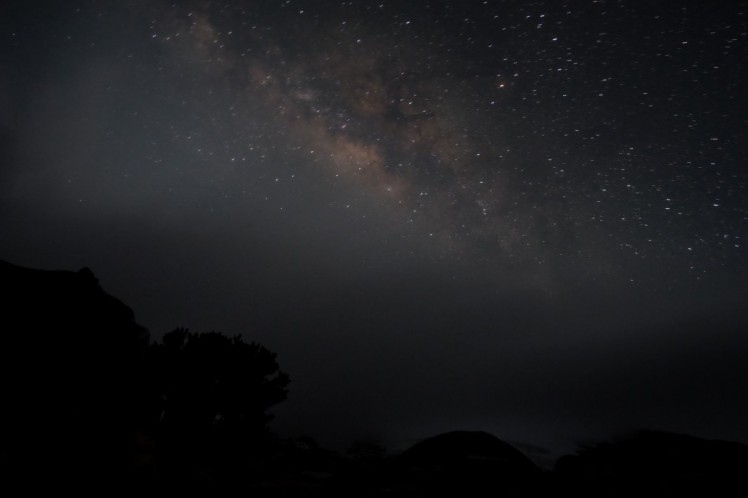 Took a night shot of the group under the stars.

Then we all retreated to our respective tents as the rain started falling. It rained all night, I was checking if the water was getting in the tent from time to time as the wind was quite strong, but it proved again to be a great tent which doesn`t let the water in!

A few days later, I met a Belgium guy Francois who had slept in the same spot 3 nights later and heard the thunder fall right next to his tent, within 300 meters only away from it, he freaked out! And he had icy snow falling all night on his tent.

He put his alarm clock every 3 hours to get his head out of the inner shell and tap from the inside on the outside shell to get the snow to fall from it so that the snow would not pressure his outside shell to the point of touching his inside shell and get it wet, if you follow me. Good technique! Also, what a crazy night he must have had! And that was the night before his 26-year old birthday! Nuts!!! He will surely remember that birthday night forever! 🙂

Next day, off down the valley to La Esperanza!