We were at the pier at 6am to grab a ticket for the boat and went to the platform, waiting to embark for San Cristobal.

First, there is a checkpoint where they control the bags to make sure nothing with seeds travels from one island to another, interesting, similar to Australia!

The pier where we waited to embark on a boat. We didn`t know what to expect actually.

It turned to be a speed boat like this one: 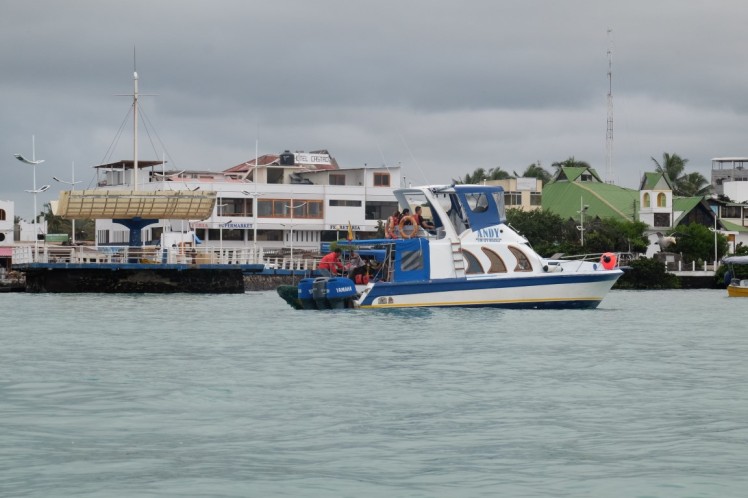 We stayed at the back and that was probably best as the boat kept bumping onto the choppy water. Sitting in the middle of the boat meant lots of back ache from the bumping. Luckily Patrick had some earphones and I had earplugs which came really handy for this 2-hour ride as the noise of the motor was really deafening. During the ride, we kept watching the sea and saw some whales blowing but from really far, and later one dolphin made a beautiful jump right in front of our eyes, so close to the boat. It was really awesome. We made an “Ohhh!!!” sound pointing to it, but then that was it, it was a fraction of a second, a shooting star in the sea. It gave me a big smile that lasted for long! Seing a dolphin makes you so happy!!!

We got to Puerto Baquerizo Moreno on San Cristobal around 8.30am-9am. 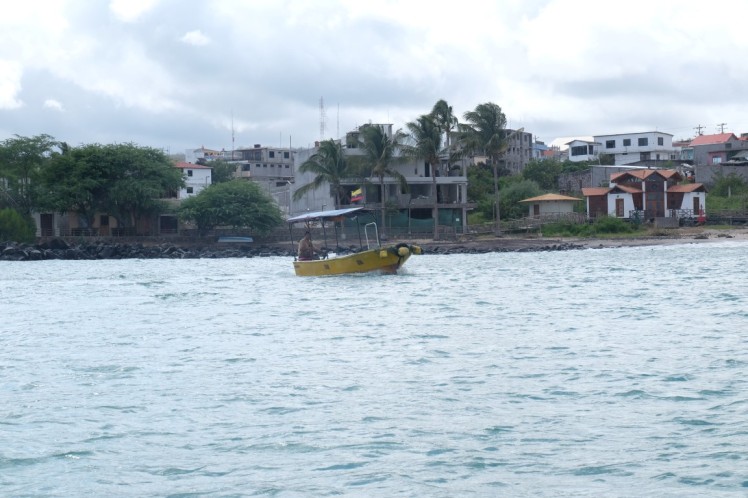 Puerto Baquerizo Moreno is a funny place as there are literally hundreds if not thousands of sea lions all over the place, in particular on benches! Humans can`t seat anywhere, all benches are taken!!! 😀 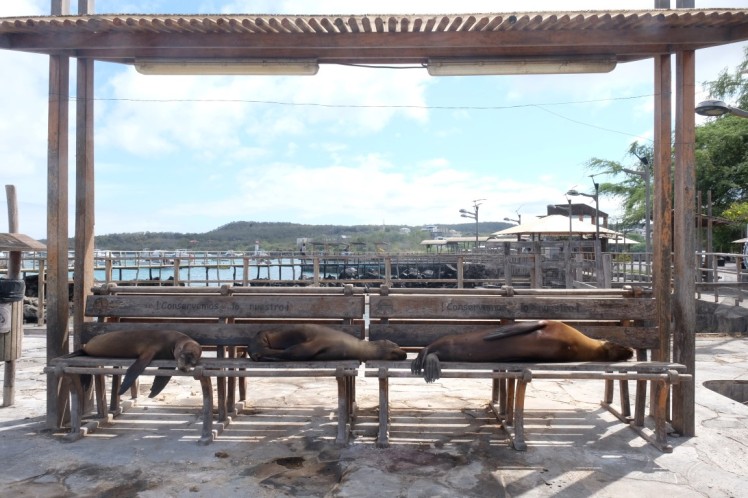 On the sea front we stopped for brekky first as we were starving. I had a bolon, my first one, which is some plantain banana mixed with cheese and other things like tomatoes and oignons. It is pretty good!

Then we dropped our bags at the airbnb place we had found online, Casa Mabel and went to the place Dave had dived with at Kickerock called Chalo Tours and organised a diving day for the next day. David told us they were the only place with a catamaran, which made it enticing. 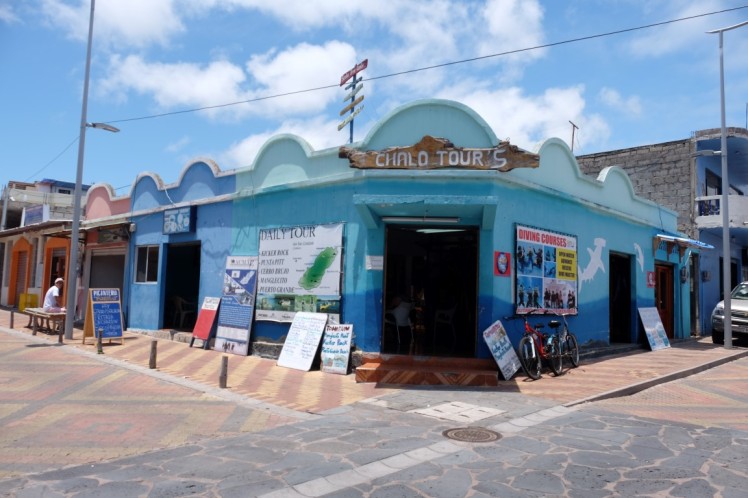 Next we decided to go to the beach. There were two of them nearby so we walked there and checked them out.

First we went to the furthest away called Playa Punta Carola. That one was not that good though as there was no shade at all. So we turned back and went to check the second one. 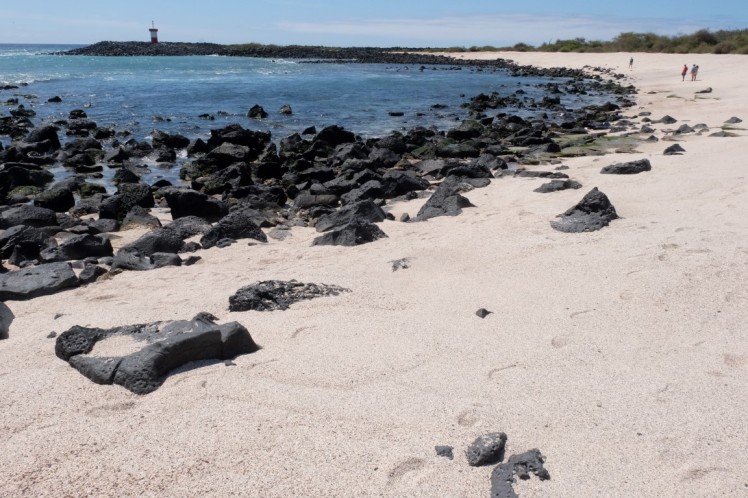 Playa de Oro was very noisy on that Saturday with loud music which we didn`t really like.

Besides that, the sea lions were occupying all the shade! No spots for humans. And even if there were some spots, they were under the poisonous tree which meant no one would have gone there anyway. 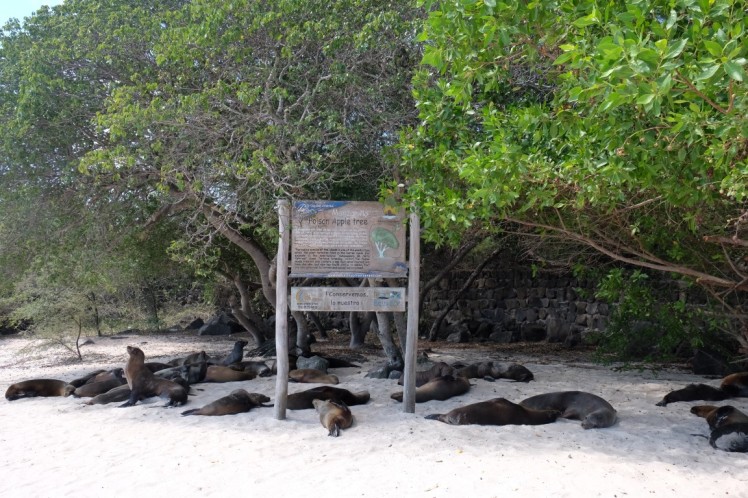 So we jumped into a taxi and asked the guy to take us to another beach. He took us to the one next to the airport which was about 10 minutes away. It was about 2pm and we agreed that he would pick us up around 5pm. We walked for a while to reach the beach.

The waves we saw there were huge, I woud say unsurfable though, more then type of waves in which you drown!

There were also mean sea lions there. 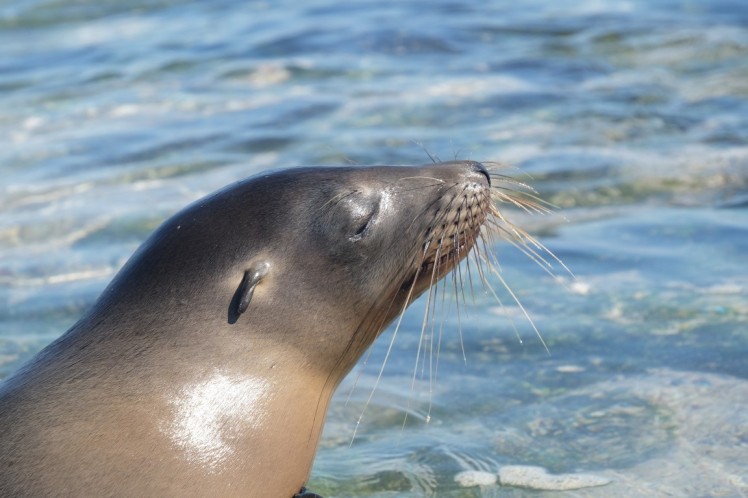 We walked a fair bit to find a tree finally with some shade and stayed there for a while, reading books. There were a few massive hermit crabs there, something we had not seen yet in our time in the Galapagos! 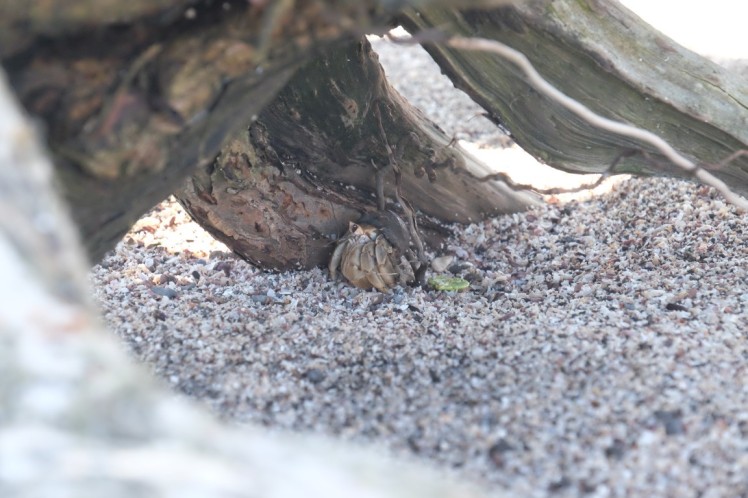 At 5pm we were at the taxi and went back to the airbnb, had showers and went to buy some beer, sit on a bench and watch the sunset. We also had actually lots of fun watching those waves on our left crashing onto the pier. We were hoping to see some people passing by inadvertently getting splashed but that didn`t happen. 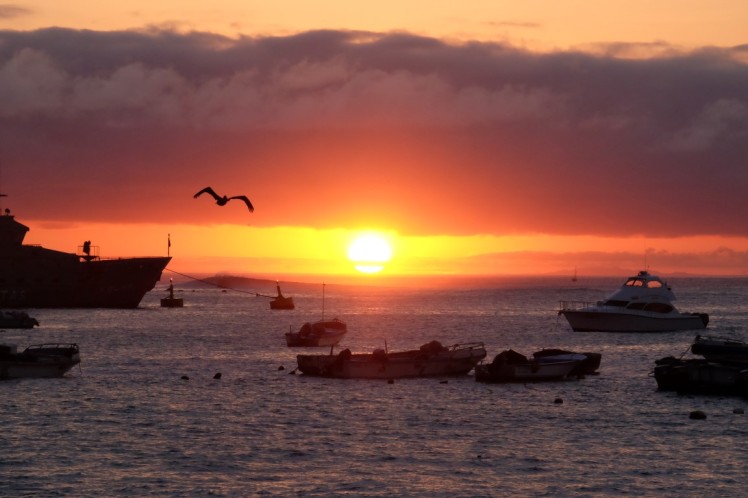 Brekky before to go for the diving day to Kickarock, another bolon for me please!

Here is the catamaran on which we went with Chialo agency.

We were waiting in the harbour for a guy arriving from Santa Cruz on a speedboat the way we had arrived the day before.
While waiting we saw all those seals basking in the sun on this boat.

And off we were to Kickarock. 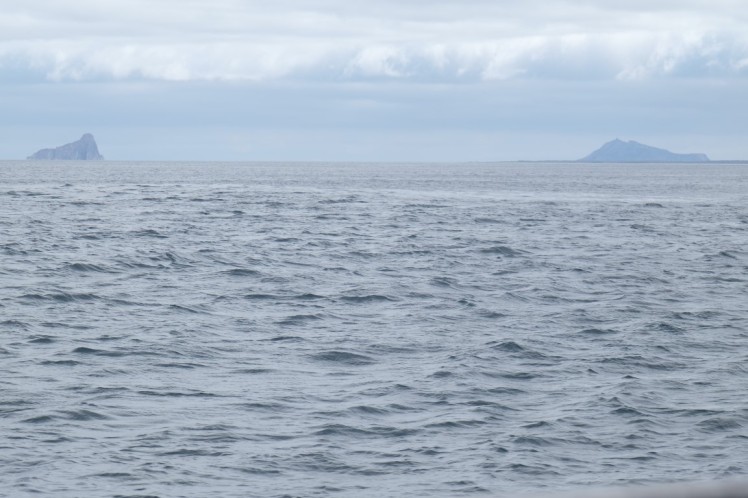 I didn`t take much photos after that. We did a test dive next to a beach to try out the equipment and then handled it to them and snorkled around. There was not much visibility and not much to see apart from a few sea turtles. Then somehow the boat had a problem and they left us on the beach for a good hour at noon which is the worst time, we were quite sunburnt in the evening. Apparently they had the wrong fuel and went a bit further away from the beach to remove the bad one and put the good one in the tank. Does that mean they released the bad one in the water? Or just that in case there was a bit of leakage they preferred to be away from the shore? Who knows. It was not nice to wait that long on the beach. Also, that day was 7 divers and 5 snorklers stopping on the beach for a nature walk and we realised diving on a 100% dive boat is probably a much better experience, lesson learned for the next time. The boat finally picked all of us again and we went for the dive, but by that time it was already afternoon. Better go on a boat that leaves for early dives. As usual, the earlier, the better the visibility most of the time! So the visibility we had at kickarock was not that special. We saw lots of sea turtles but we were not really interested in them anymore, we didn`t see any special thing. The wall itself was impressive, but the visibility was 10-15 meters which didn`t make us appreciate the site. Disappointed. We were back around 4-5pm and went for shower then dinner where we had nice ceviche.

We decided to rent some snorkeling equipment and went to this shop, Scuba Eden where we rented mask, snorkle, fins and wetsuit and also a go-pro for the day, yeah! Finally we could make our own videos! 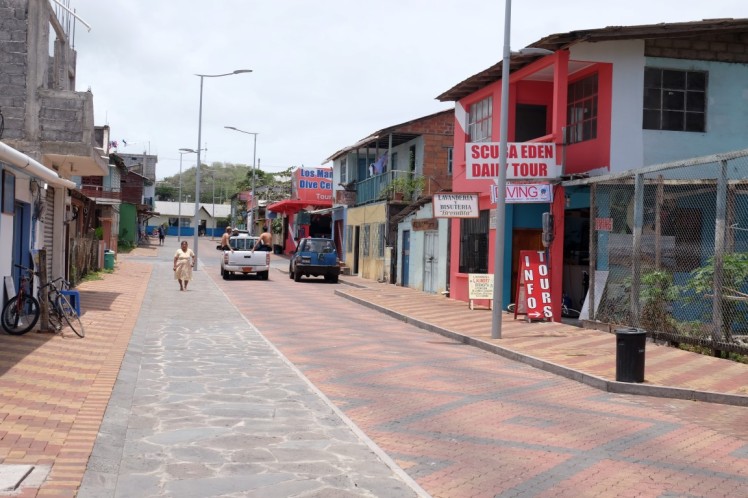 They were super friendly and recommended to us to go to Tijeretas beach.Here is a map they gave us. Tijeretas is a beach a bit further after the first beach where we had been two days before, Punta Carola. 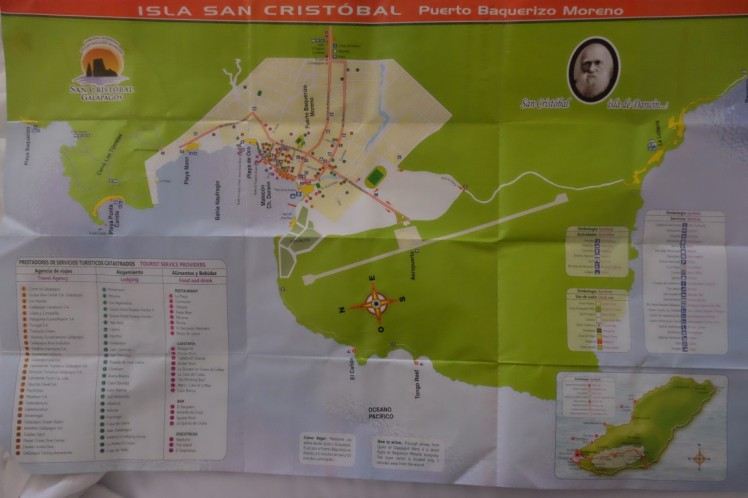 So we walked there, here is a picture taken with the go pro from a view point of the Tijereta cove where we were about to snorkle. I didn`t take my camera with me that day as we would mostly be in the water and I was not too keen on taking the risk of getting it stolen!

Here was the ponton from which we were getting into the water.

There were some seals hanging around at the spot where you could get in and out of the water, not always convenient but quite funny. 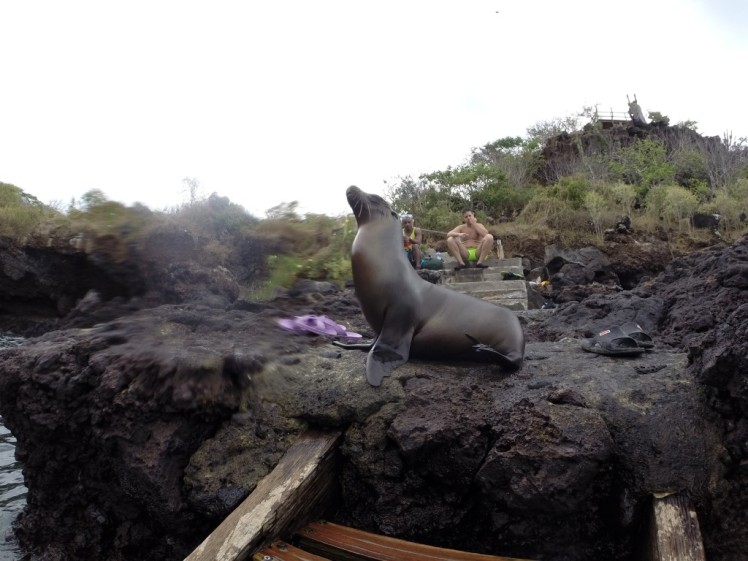 We went for 2 snorkeling sessions and had fun making lots of videos. There were sea lions with which we played, one actually even bite one of my fin. There were lots of sea turtles. Many of the wishes we had already seen when snorkeling and diving before. Another additional fish which looks like a damselfish, a little black fish with blue eyes and yellow lips which made us laugh a lot. We left the go for a while at the bottom filming and it made a funny footage where two of this black fish keep coming out of their hole in the rock to chase the other fishes and defend their territory. We had a big laugh watching that particular video in the evening. Again, will try to add it here at some point!!!

After our second snorkeling session, we met this Ecuadorian family with who we chatted for a while. Both parents were policemen and the dad had been working for a year in the Galapagos already. He could not believed that we were long-term travellers and was asking if it was common, how we did it, why we were doing that. I told him I thought that was already something awesome that he had moved away from Quito to work here even for a year, not many people do that either!

While chatting, three sea lions were sleeping nearby.

We went for a last snorkeling session and then went back, had showers, gave back all the equipment and go pro and went for our last dinner in the Galapagos. I got the awesome sea food plate.

There was this cool sign listing the 17 islands of the Galapagos. 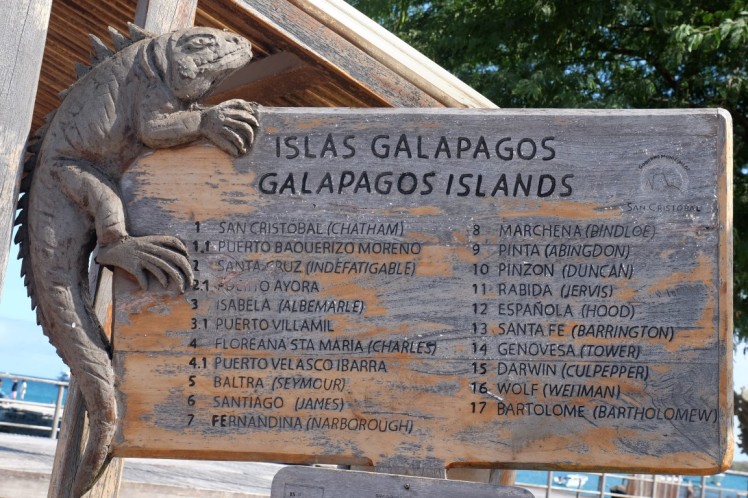 And the map that goes with it.

We passed these guys, one was throwing brick after brick to the other guy. No helmet, no solid shoes, no protection wear, you guys are as nuts as the guy without a soundproof helmet in Bogota, jeeez, the work conditions!!! Oh well, as long as they know what they are doing..

And here we got to the airport, doing the check-in with Tame. 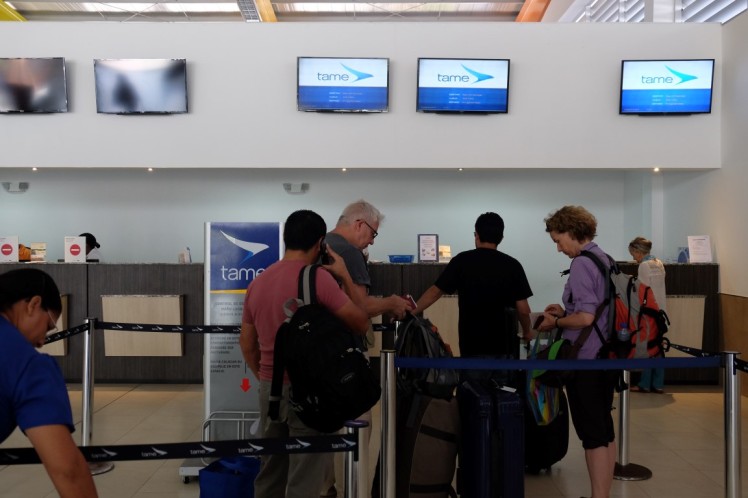 The airport roof simulated the beach.

While waiting for the plane, we could see the sea.

And here was our plane.

Last look at the airport.

And off we were in the plane.

And gone were 15 intense days in the Galapagos islands, one of the most beautiful place I have seen so far on this Earth and that I highly recommend going to! In 2 hours, we would be back in the pretty…Guayaquil!!! Hey, but wait, I haven`t seen Darwin and Wolf, and Genovesa, and Floreana, and we didn`t dive at Punta Pitt and and and….I have to go baaaackkk!!!!!! One day maybe??!!! Hopefully. What a magical place on this Earth!