I was just ready at 3.02am and about to go downstairs when a guy came to knock on the dorm`s room to pick me up! Perfect timing! I was actually surprised to see 6 other people already in the mini-van when I entered it. That`s called efficiency! We drove for a few hours in the direction of the Colca Canyon.  I tried to sleep / rest as much as I could with ear plugs and eye mask on during the bus ride. I woke up just on time to catch dawn. 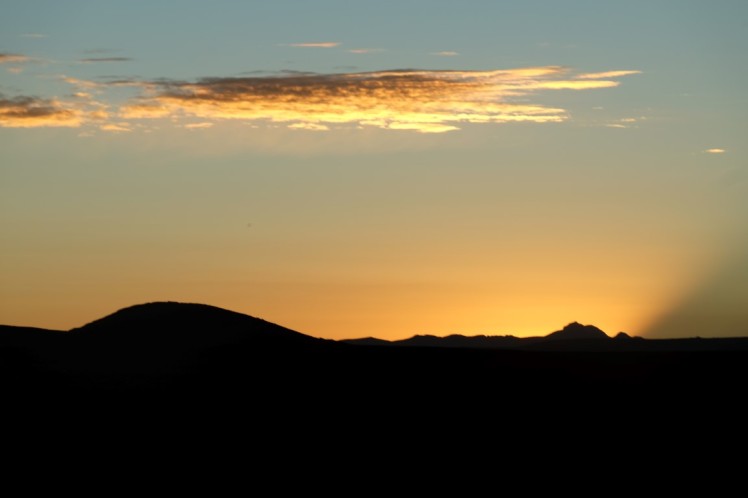 Here is the mini-van we were in.

View from the window in this early morning.

The landscape in front of us was not too bad.

And it kept changing constantly!

The “not any more full but still a little bit” full moon was rolling on the mountain`s crest, the same way as it had been doing in the Galapagos. 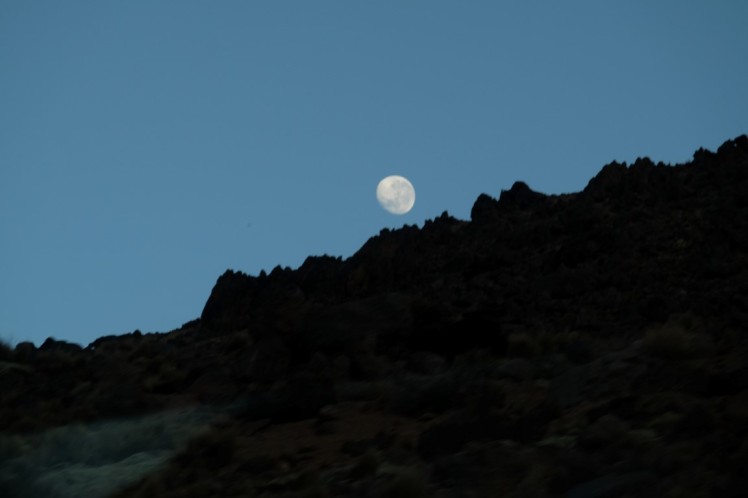 We arrived in Chivay, here is our mini-van from outside.

There we queued to buy the entrance ticket to the Colca Canyon National Reserve. I remember that it was really freezing that morning!

After that, we cruised in the direction of the Cruz del Condor where there was good chances to see them. The landscape was pretty.

Another view with the river at the bottom.

From higher up, with Inca crop terraces. 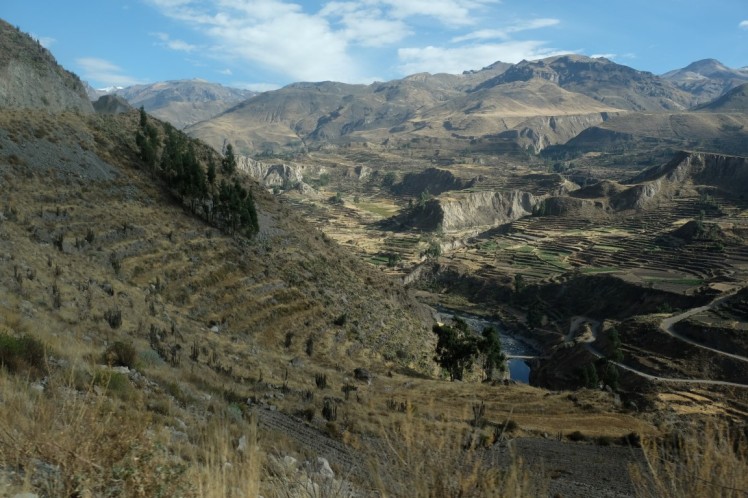 A village we passed with the mountains in the foreground.

We were getting closer to the Cruz del Condor view point and could already tell there were hips of people!

Indeed, there were! But we were all there with a childhood desire, the desire of seeing one of the biggest flying bird of the world, the condor.

And condors there were, although they were quite far from me each time I took photos of them. I got some videos but not a single good shot sadly. 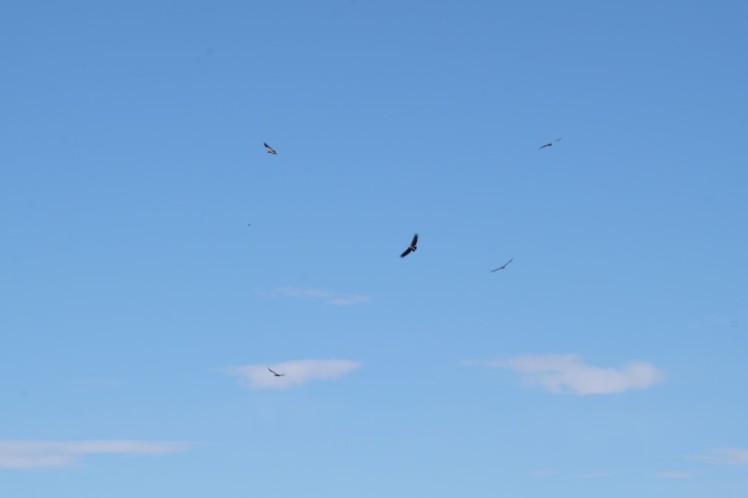 After seeing the condors, we got back into the minivan. I remember how Miguel, our guide, had put some awesome happy music in the minivan which cheered all of us up. Nothing beats good cheerful entertaining music especially when you are still half-asleep after waking up in the middle of the night! We drove to the trekking starting point where we were not the only one about to trek, there were plenty of other groups. 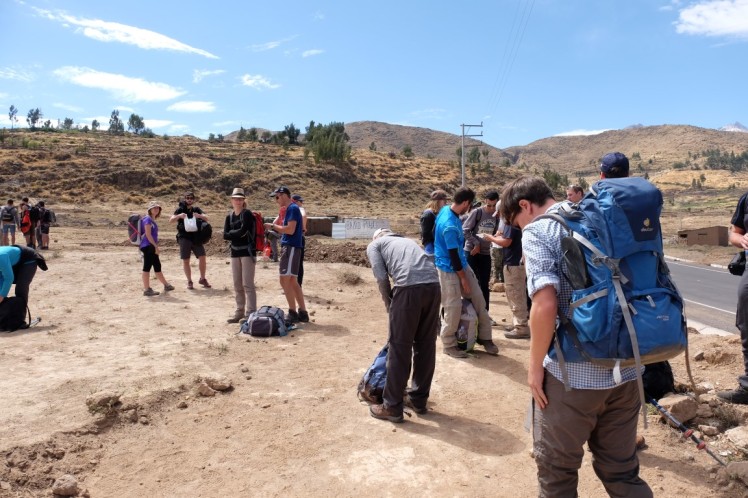 Here was our group. On this picture you can see Miguel, our guide, then a French couple from Aix en Provence both working in engineering consultancy, Charline for the Helicopters safety branch for Airbus and Eden in process improvements on missions for various energy companies. Then to the right, Laura, Sarah and Carla, three Spanish girls from Catalonia,living in Barcelona who were working in neurology. Next to them a Dutch couple living in a zoo next to Amsterdam. Dennis was working in the zoo and was passionate about birds and animals and Belinda had worked in zoos
before but was now driving half-hour outside of the zoo to work in a private consultancy located in an elderly house as a physiotherapist. To my left were 3 other travellers who had come alone like me: Marie-Anne, from Montreal, Quebec who had now been working for nearly 2 years in micro-credit in La Paz, Karen, who was Peruvian and living in Lima and working with a friend on a small business providing the government and other companies with specific uniform clothes and Michael, from the German part of Switzerland who was working for Swiss Telecom.  Such a diverse and rich and interesting group of people! Miguel asked to us: “Hey guys, you need a group name. How do you want to call yourself?” I shouted “Condors!” And as everyone was either still sleepy or just not really caring about that, here we became the…CONDORS!! 😀 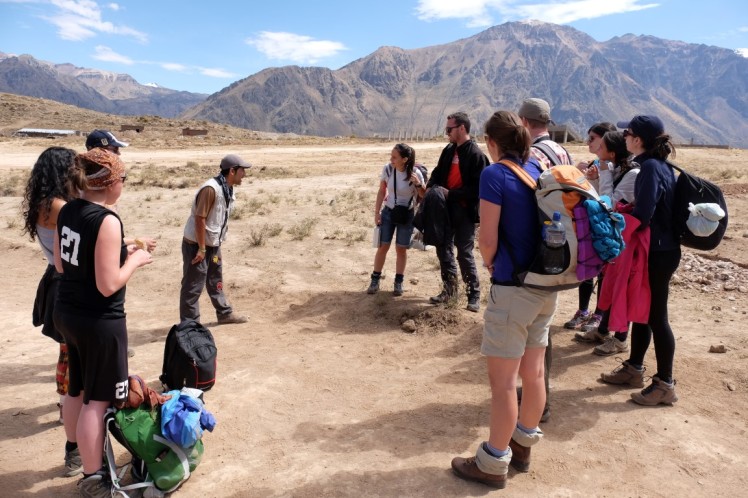 We started the trek by walking on this path.

The view to our left, not too bad, hey? The thing is, the Colca Canyon is the second deepest of the world after the Cotahuasi canyon, and is 3,191m high. 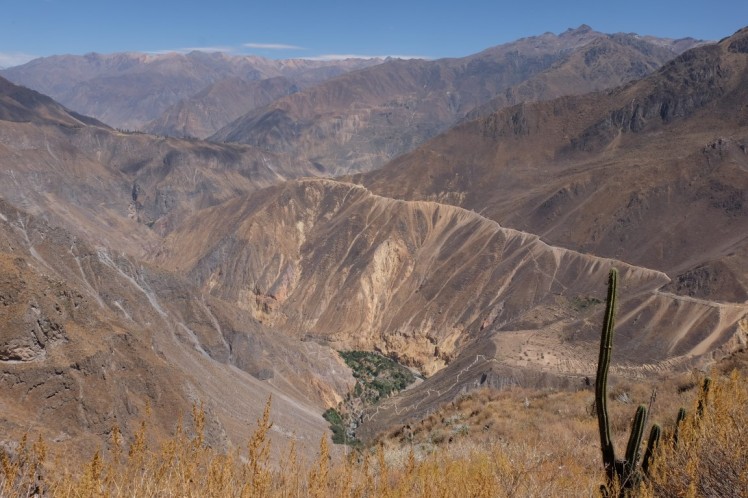 Another view while going down. 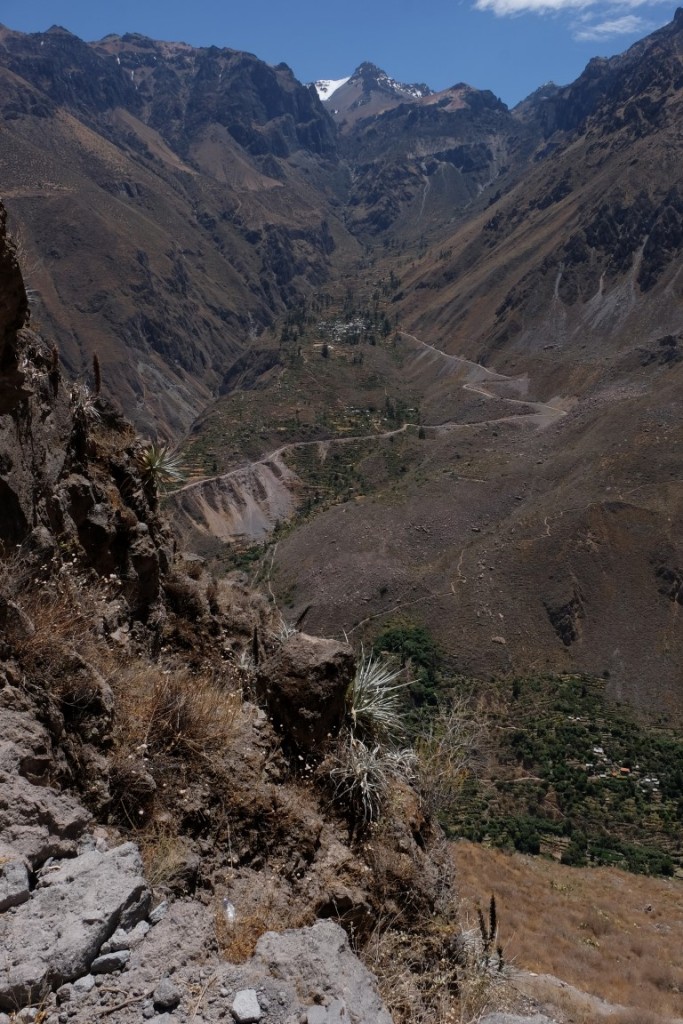 While we kept going down, one of the thing I found the most fascinating was this rock`s structure which looked like a giant organ. 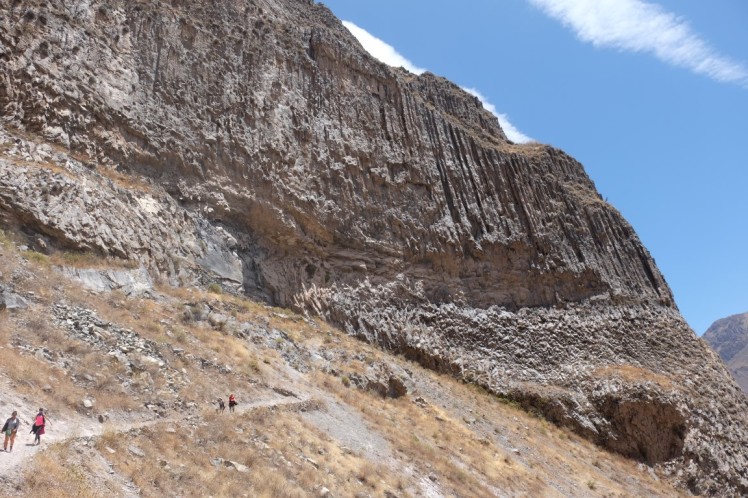 We were almost at the bottom of the canyon and could see the bridge we were about to cross. 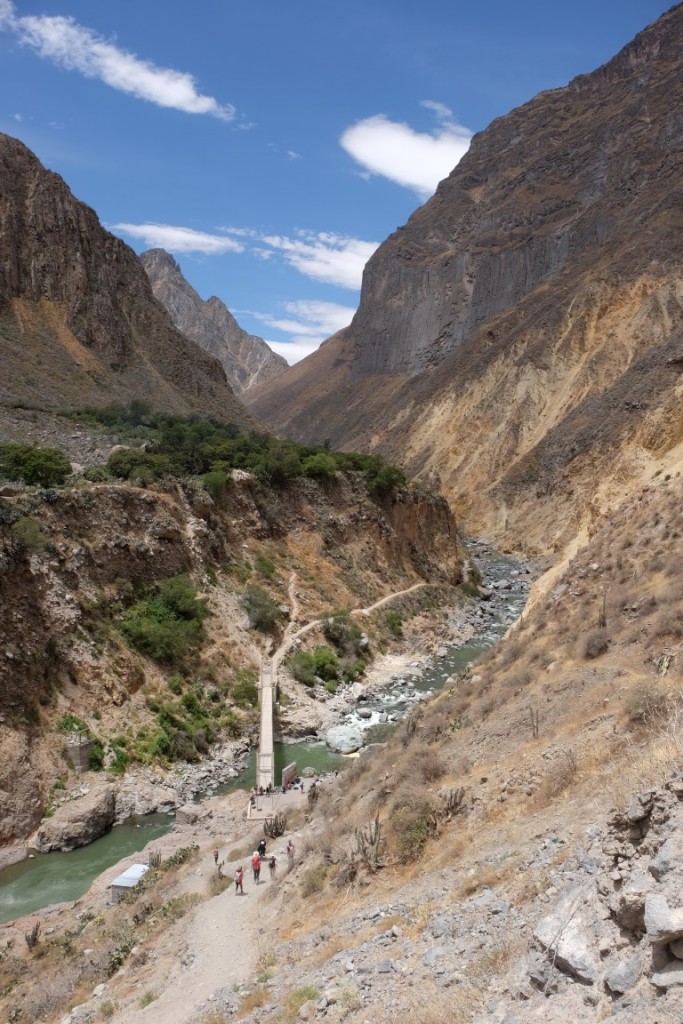 At the bridge, before to cross it, we had a snack`s break and I changed my zoom lens for my 12mm prime wide angle lens. Here was the river viewed from the bridge.

And up we went after the bridge. 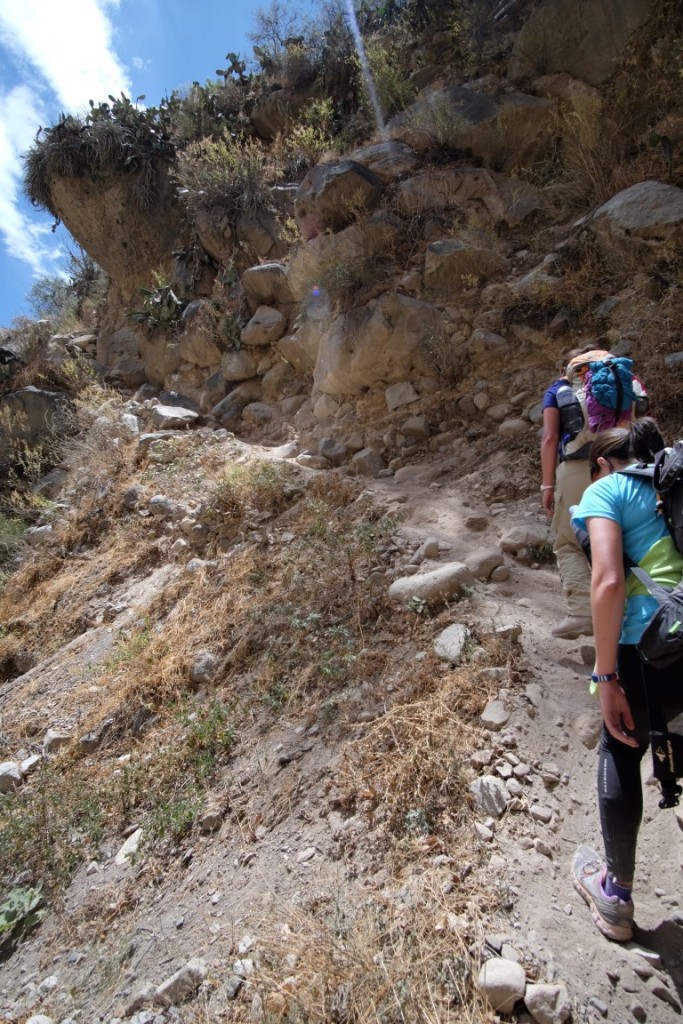 Looking at the mountain on the other side, we could see a little bit of the trail we had just walked down. 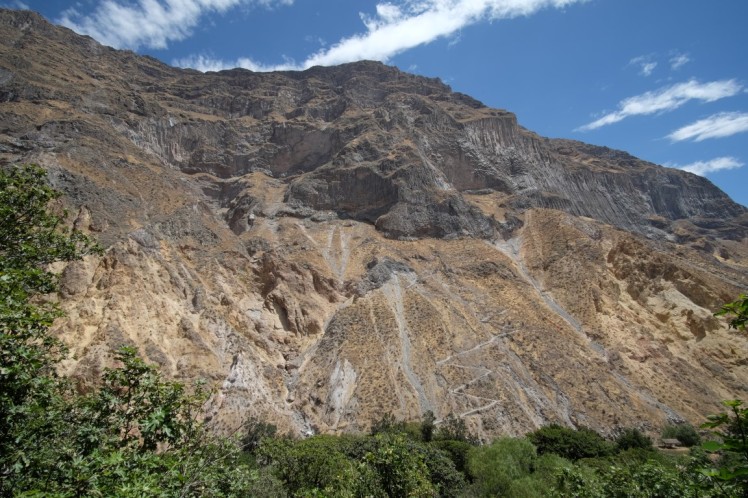 We kept walking on the path, up and down, towards the village of San Juan where we would sleep.

To the right, the village we were about to stay in, and to the left, the fantastic view of the canyon.

Lunch often starts with a soup in South America, here was the one we got for lunch as a starter. I forgot to take a photo of the main, but it was chicken, rice, potatoes and veggies, quite common too.

After lunch, we got dispatched to our rooms. Couples got their little houses for themselves, then the 3 Spanish girls, Karen and I got into our own little house and Michael and Marie-Anne to the one left. Here was our little house. Comfy change from a tent, alright, why not, even if I just love my tent! 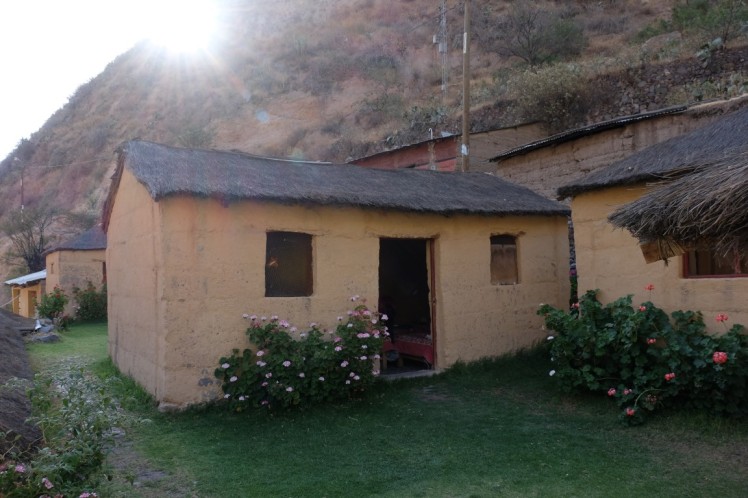 After lunch, we had the entire afternoon free. I have been used to hike all day long, but I didn`t mind a relaxed rythm for once! We all condors gathered around a table and the Spanish girls got 2 deck of weird cards out and we played the game called “Cheater” (This game is called “Le menteur” in French). For those who do not know the game, here is how it goes: A person announces what they put down in the middle, it can be one or two or even the maximum of 8 cards of a number.
For example, the person who starts says that they put “2 cards of number 7” and lay down the cards faces hidden on the table. The next person has to pass or to put exactly the same. Now, the fun is that you can put other cards and pretend that you just also put “2 cards of number 7”. The person after you can call you “Cheater!” and turn up the cards you just put. If you didn`t cheat, he get the full bunch of cards which were put on the table by all the players of that round so far. If you cheated, you get the cards. He could also say nothing and pass or pretend he also has “2 cards of number 7”. The game became actually more interesting the second time we played it when Laura said that now, no one could pass anymore. That meant you either had to lie, or hopefully have the right cards, or call your neighbour a liar. 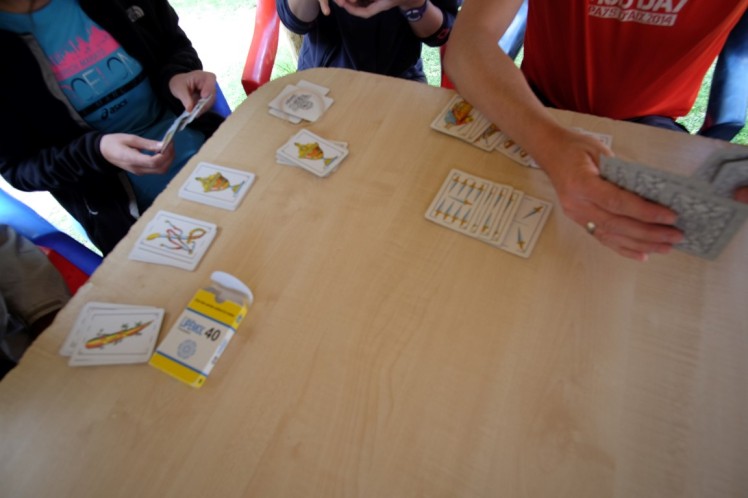 At 4pm we gathered to go for a walk with Miguel for him to introduce us to different plants.

This flower is called floripondio. Apparently, if you boil the white part in water and drink that beverage, you may experience hallucinations. 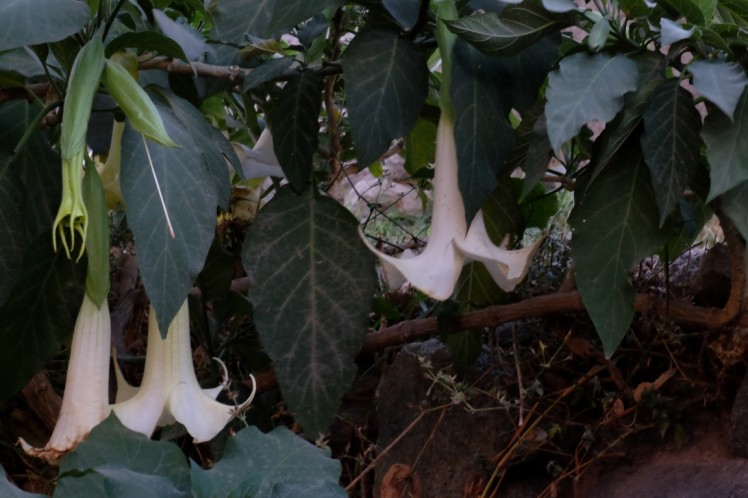 This branch is called ratoupa and is one you want to avoid. If you fiddle with a branch and get the white liquid into your eyes, it burns for a few days.

That plant is called chulmar and is just food for animals.

View of the canyon while walking.

This plant is called “molliey”. If you grab the leaves and rub them in your hands and onto your body, it is a good insect repellent. It works also against pains.

The seeds of the “molliey” can be dried for about 2 months and then peeled, grinded and used as spices while cooking.

This is the blue aguava. Its roots are used to make…tequila!

This one is called ralangoutaye. You break down the top and squeeze a bit and use the liquid as an antiseptic on cuts. I had actually fallen down while we were going down in the morning and cut my skin near the elbow and still some open small blood cut there. I tried this plant on my cut. Sounded like working. 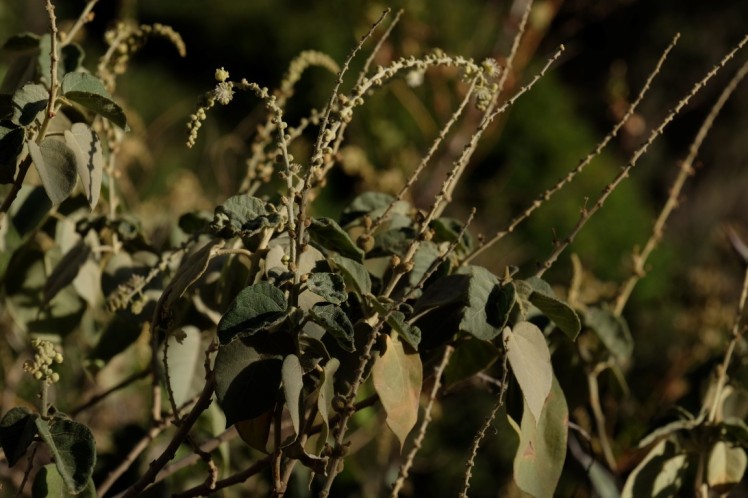 We stopped at some point during the walk and Miguel told us more about plants, village, the mining in the area. 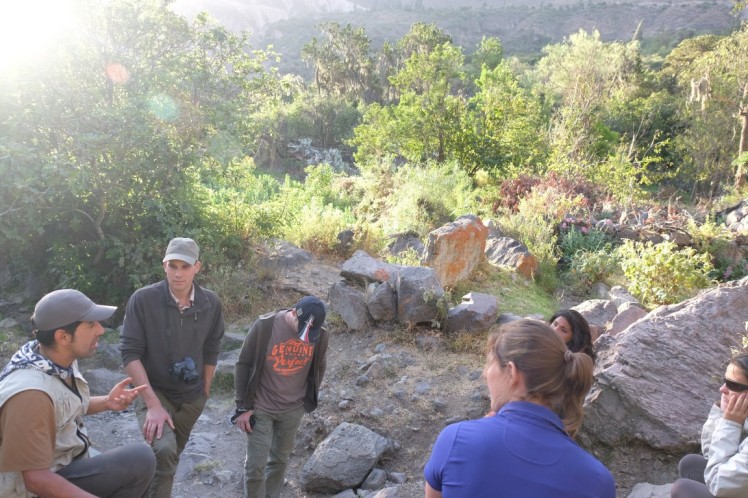 On cactuses are located small black dots surrounded by white called cochinillas. Villagers collect them, wash off the white, put them in boiling water, dry them in the sun and then use them for painting wool as when put with wool in boiling water, it becomes red and stains the wool.

After this cool walk we went back to the village.

Gloria, cooking for us in the kitchen where wood fire is still used also here to cook. 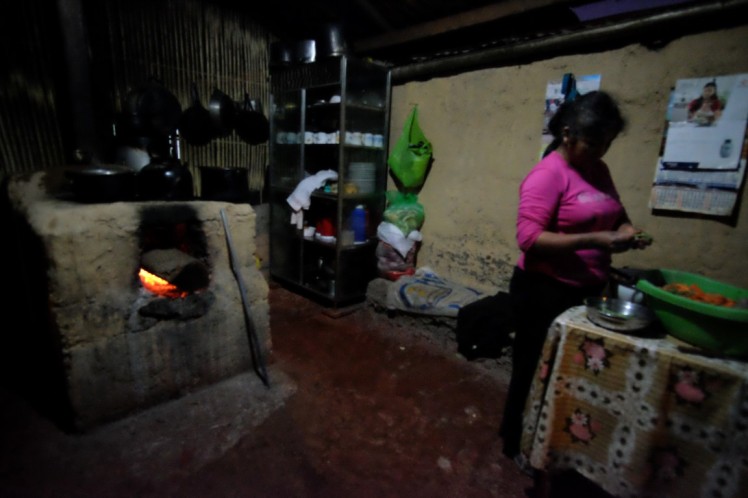 After dinner, I tried some night shots but there were some ugly huge orange lights which messed up the shots a bit. It actually created some mood to the photos, I guess, but that`s not what I was looking for, I would have preferred a clean night sky! 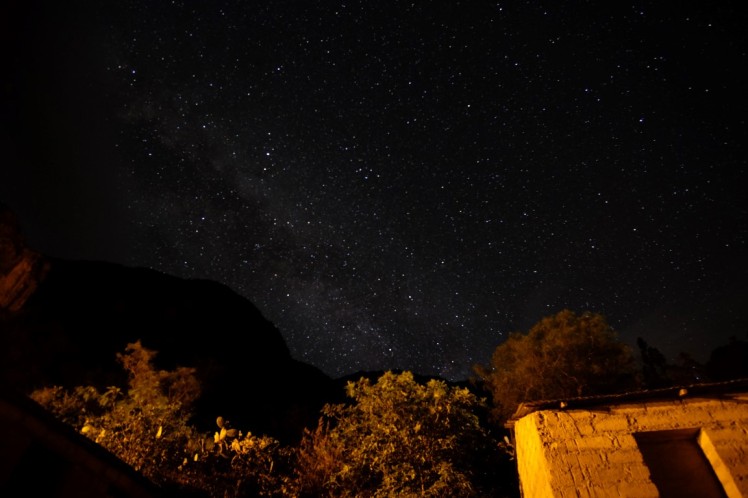 Tomorrow, more walking through the Colca Canyon, off from San Juan to Sangalle oasis!