Here is the Villarica volcano and an Araucania tree while walking on the main street O`Higgings, heading towards the backery.

Here is the bakery where we bought croissants, bread, ham, cheese with Helene to make sandwiches for the day.

We headed to the local bus stop where we met with Aurelie and Laetitia and queued with other people to take it to the Huerquehue National Park. There were many people going and they fit everyone in 2 buses, but with a dozen people standing during the entire ride in each bus. The four of us were lucky to get a seat.

Lanscape from the window during the bus ride. I was sitting with Laetitia and she told me some work stories of working as a firewoman. For example, yes it is true that people call when a cat is stuck at the top of a tree and sometimes she asks: “Have you ever seen a dead cat in a tree? No, well, it will go down at some point, don`t worry!” I liked that one. 🙂

We arrived and paid the entrance of the National Park and then started walking, in the direction of Lagos Toro, Verde y Chico.

It was 9.30am and the weather was a bit cold but not that much and we warmed up quickly when walking. I had 4 top layers on and removed the fleece and Gore-Tex and only kept shirt and long sleeves.

First we saw the Lago Tuiquilcco on our left.

We spotted a pontoon on which we decided to come back later in the afternoon to chill out there.

Off to the lakes.

Walking on the path in the forest. 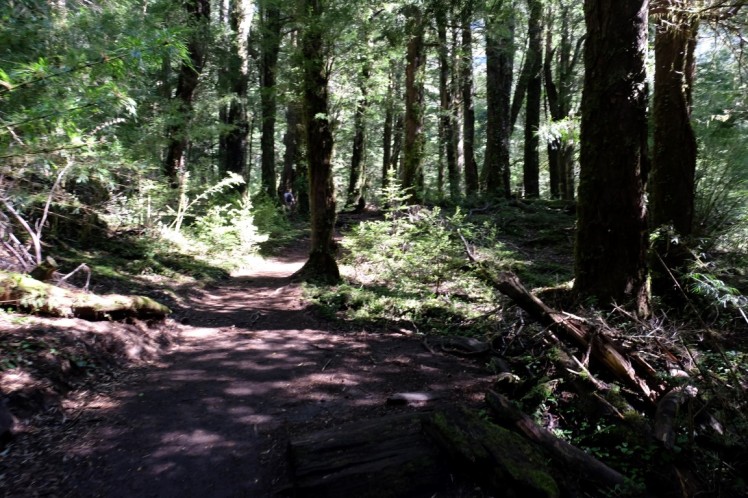 Here is a picture of the map showing the walk we did that day. We had just walked the Sendero Nirrico, where we had seen the Lago Tinquillco.  We were now heading towards 2 miradors and then to the Lago Chico, Laguna El Toro and Lago Verde.

We saw this waterfall. 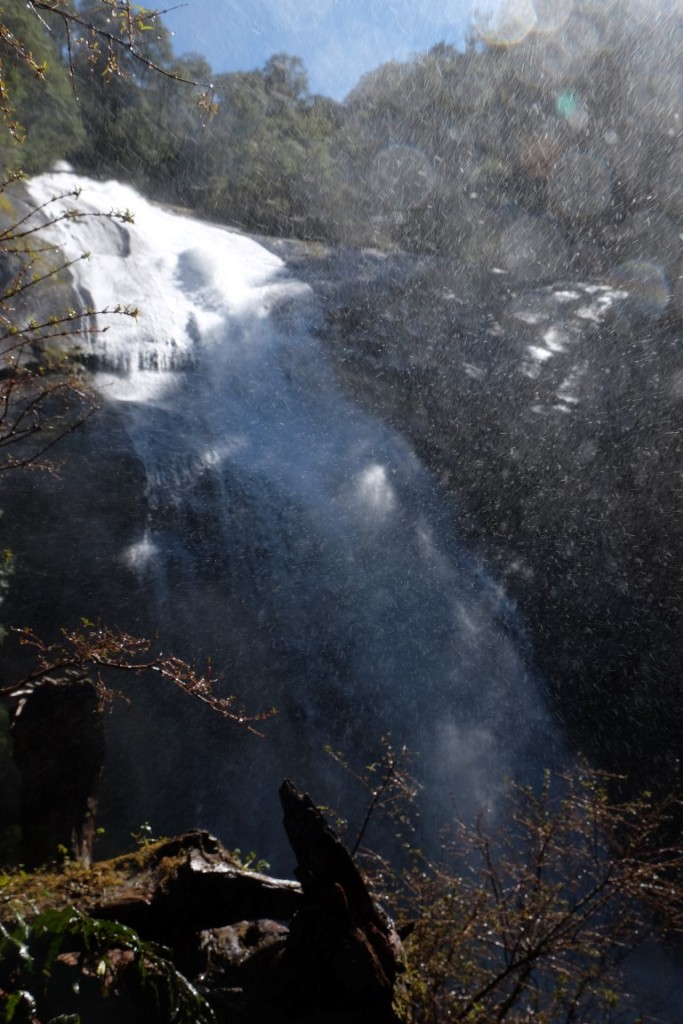 View from the first mirador of Lago Tinquillco and Villarica volcano in the background.

Continuing on the path.

View from the second mirador, a bit similar to the view from the first mirador but from higher up.

There was a huge trunk above which we had to go in order to continue on the path.

The reflection of the trees in the water

Should we head first to Laguna Verde or Laguna Toro? Mmmm…Tough choice. 🙂

Let´s go to Laguna Toro! We had pic-nic there.

Walking on a path on the right, in the direction of Laguna Verde 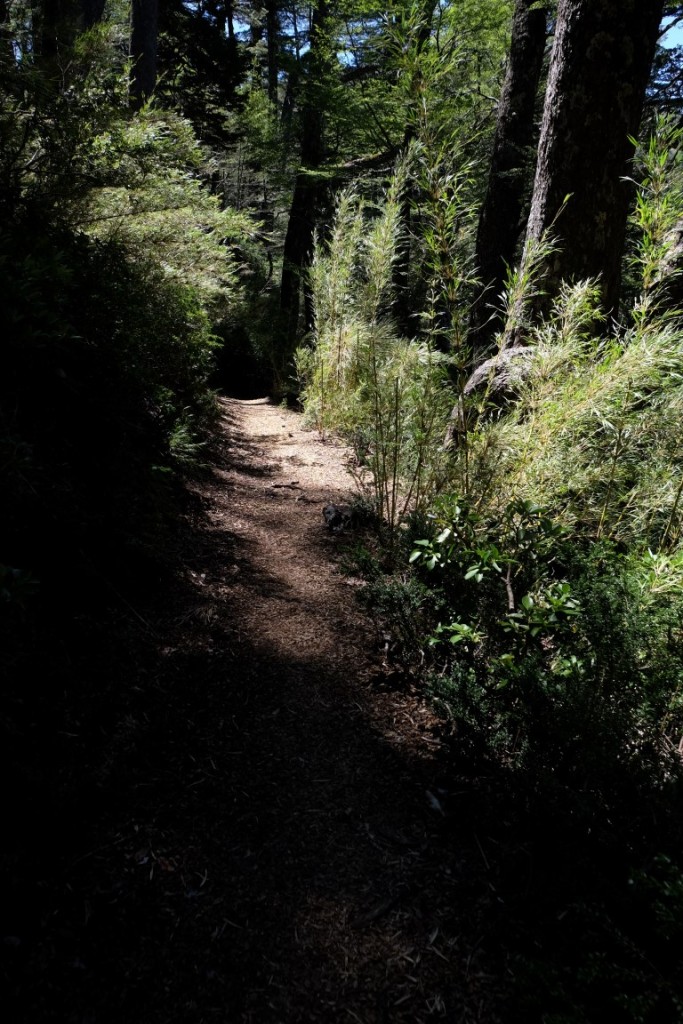 Seeing Laguna Toro from higher up.

Lots of snow if we were going to Laguna Los Patos. Didn`t have the right shoes for that.

Saw a little devil on the way.

Leaves about to be born.

We can see some snow in the distance. It could have been so nice to do the 4-day hike though!

View of Laguna Verde, some Araucania trees in the foreground.

A pretty insect we ran into. 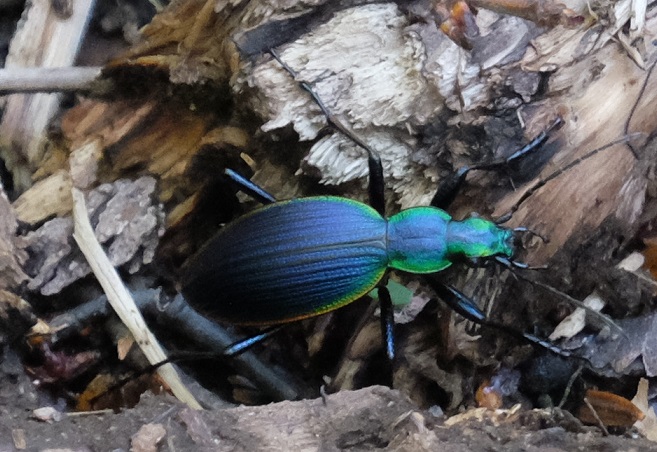 Helene and Laetitia were walking in front of Aurelie and me and suddenly stopped. I said: What are you looking at? They said “Nothing…” because they knew Aurelie was scared of spiders. I approached and saw the tarantula and started taking photos alongside Laetitia. And suddenly my foot slipped and I fell, and Laetitia too! Now, we got a bit scared at that moment because we didn`t know where the tarantula was and were not very keen on it jumping or walking on us without us noticing! 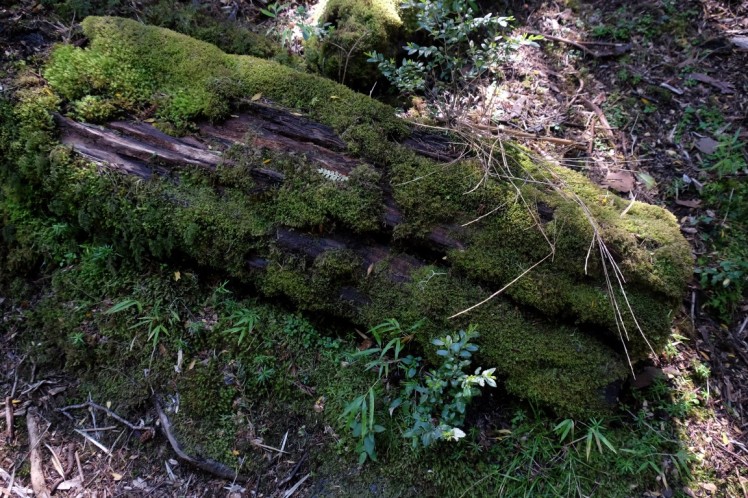 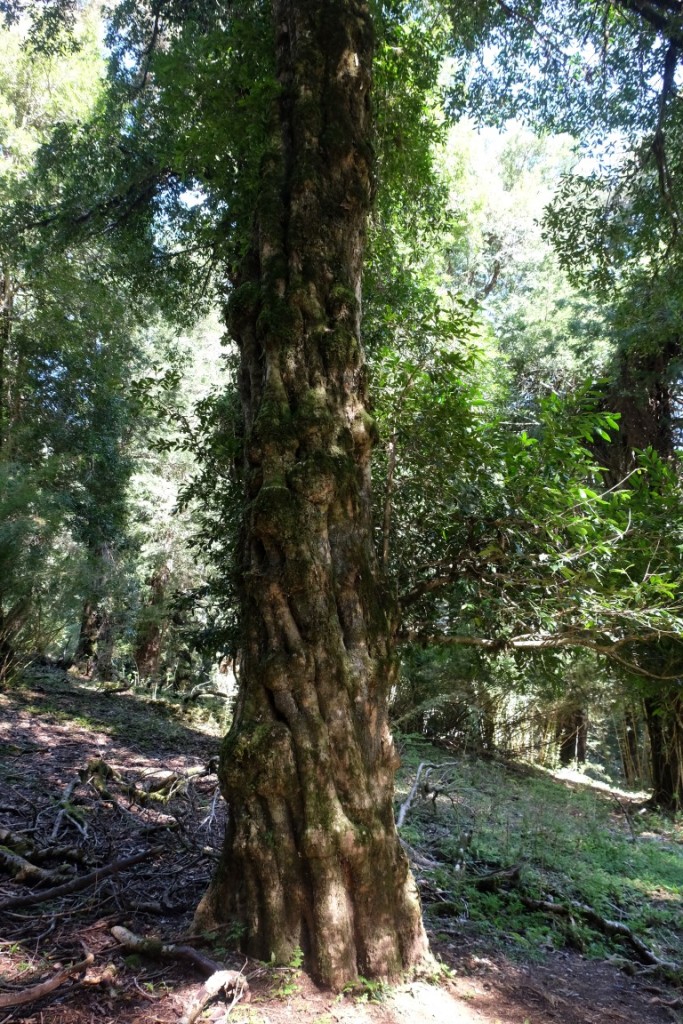 Had some chocolates on the way back

We stopped at the pier where we put our feet in the water which was icy.

Were back around 5pm at the spot where the bus had dropped us. Lots of people waiting already.

On the way back, we were standing this time. The bus journey was about 20-39 minutes. Once we arrived, I went to get a bus ticket for San Martin de Los Andes for the day after next. 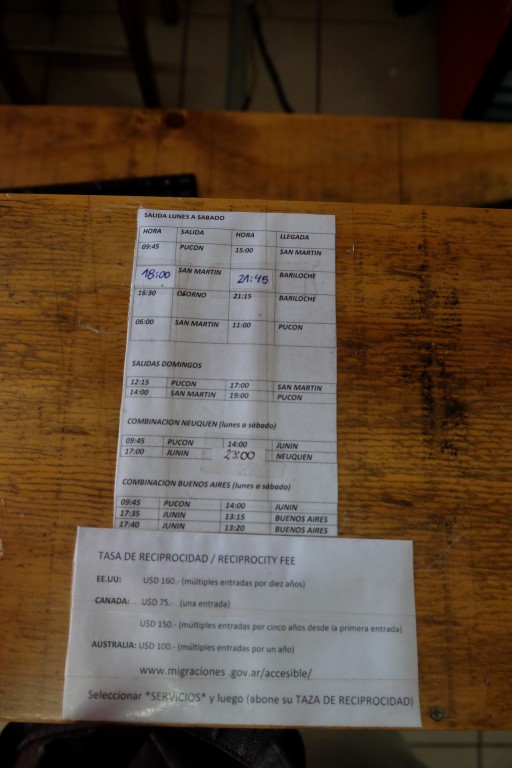 Then I went back to the hostel and met with Aurelie, Laetitia and Helene. I went to give some laundry in front of the hostel while they went to Summit Chile to book Quetrupillan volcano ascension. We had emailed back and forth the whole day with them and in the morning they had told us that Villarica ascension was still not reopened so we had thought about doing the Quetrupillan volcano ascension instead. When I joined them there though…they told me we could actually go to…Villarica!!! It was reopening the next day after 9 months closure and we would be…the first ones to ascend it!!! We tried all shoes gears and snow gears and put them in these boxes with our name above it. Well organised!