I woke up around 6am. Packed the backpack, packed the tent. Went to the kitchen area to make brekky. Chatted quite a bit with Alfonso, the Canadian guy living with the German woman in California. He was shocked by the number of newbie trekkers at this campground. They had started with the back of the Circuit and were now about to do the W.He was telling me: “But these guys are not hikers! I want to go back to the Circuit!” I said “Yeah, Torres del Paine is not a true hiker thing, but if it gets new people into hiking, why not? You always have to start somewhere one day! Just enjoy the views of the W and forget about them!” One of the good reason why it is better to start with the W and keep the Circuit for the end, that way you see the crowd first and then get to the less crowded section instead of the opposite.

We chatted for a while and then Alfonso went away to go wake up his partner. A British couple arrived and started cooking at the other end of the table. The guy’s plastic spork broke. It was my last day on the hike and their second day of 4 days. I didn’t really need my Titanium spork anymore as I was flying out 5 days later and could get a new one later on while it would be really handy for him for the next few days so I gave it to him. Then it was almost 8am, time for me to go I wanted to make sure I could catch the 12.30pm ferry!

I started walking. During this last hike, I passed hundreds of people coming from the opposite direction. Countless “Hola!” again. I had been happy not to run into anyone coming from the other direction for the past 4 days. It gets tiring to say hi to everyone! It was time to go. 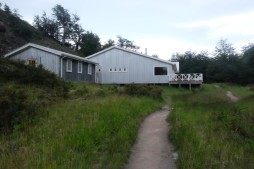 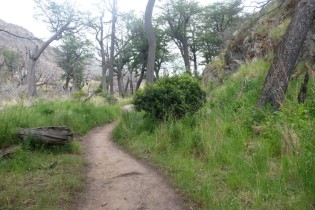 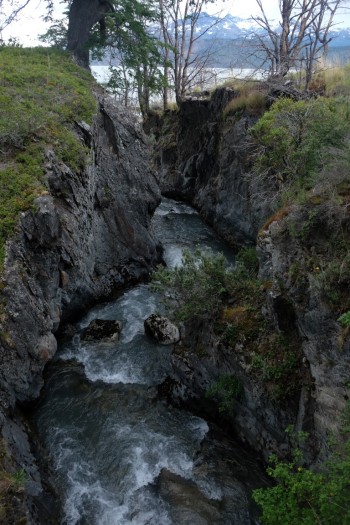 I stopped at the Mirador Lago Grey.

Suddenly there was this hawk there. Such a beautiful bird.

I saw these beautiful flowers I didn’t see a single time in other parts of the park. 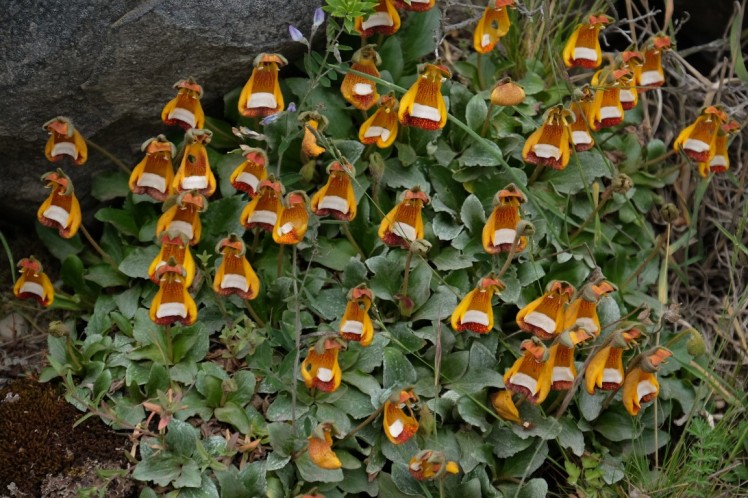 The hike down was really nice. Seeing the glacier, some really snowy peaks, the Laguna Patos. 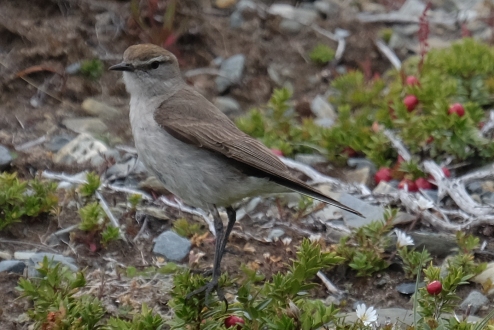 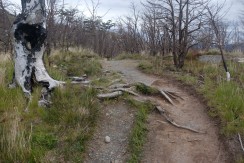 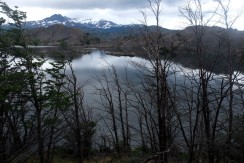 At some point, in the middle of the path, I ran into Claire, a girl who was in my dorm in Atacama the three nights I was there around mid-October, two months before. So funny! We chatted for a bit, talking about what had happened the 8 weeks in between and what was coming next.  She was on a first day of Torres and going to travel the next few months.

Towards the end, I was walking for a bit alongside a guy who had just been on the Circuit to. Then we arrived at this split where he was heading towards Campamento Italiano and me towards Paine Grande. 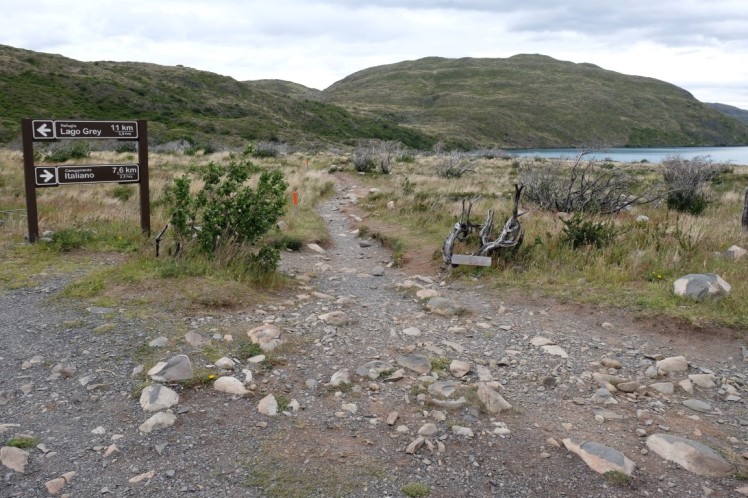 There a park ranger asked him: “Hey, do you have a booking for Campamento Italiano?” I was surprised and asked the park ranger: “Why does he need a booking? I camped there a week ago and it is a free campground, no?” and the Park Ranger said: “Yes, but now is after 15th December, it is high season now, the campground gets full, people need to book!” I was so surprised. Lucky I didn’t go on the Torres too late. It would never have crossed my mind to book that free campground!

I arrived at Paine Grande campground in three hours and half, at 11.30am.

For once, the map estimate was accurate and I was not over-time. The same was occurring this time as on my last day in El Chalten. There, I saw the British couple I had given my spork too and sat with them for lunch and was allowed to use my spork one last time ahah. They were from London, travelling for 9 months and only 3 months into their trip. So cool. Emma and Julian arrived shortly afterwards. They had left 1h15 after me but had not managed to catch up with me. For once I arrived at destination before them! They actually told me that they had indeed expected to overtake me at some point and got worried and thought they were late when they realised they had still not seen me! Funny. Then Vitold arrived and had some lunch with us too. Then we saw the ferry arriving in the distance so we said good-bye to the British and Vitold who was also going on the W. Emma, Julian and me headed to the ferry.

We saw the goose family I had seen on the first day. Or maybe it was another one.

There were so many of us going back! 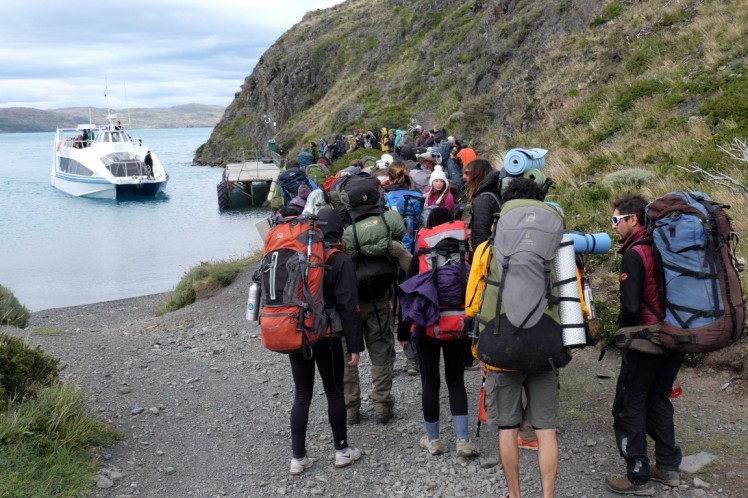 Looking at the lake, I wonder if these boards are for people to jump from and swim in the lake in summer. 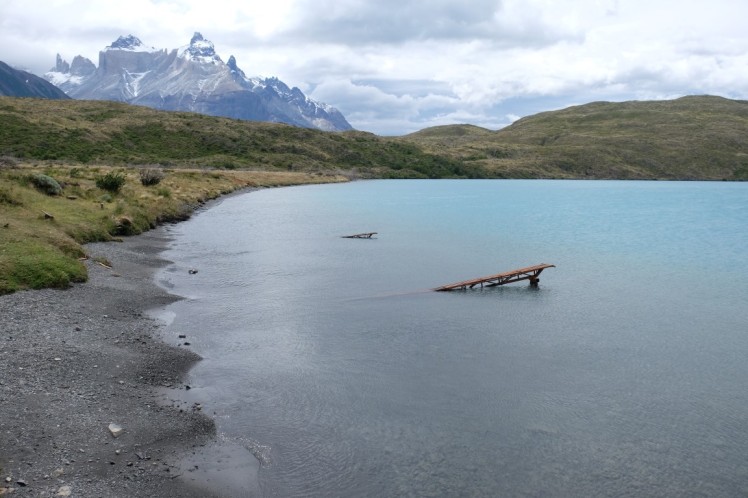 Before boarding the boat, Julian saw some calafate berries.

I had seen plenty of berries during the trek but had not been sure how calafate berries looked and had not dared trying to eat any. So it was great to finally try them, on the last day in the Torres del Paine National Park! The saying goes that one who ates calafate berries will come back to the place where he ate them one day again. So it was really symbolic to have some just before to board the boat. It did feel that one day I would love to go back as there were so many other tracks to explore around and the Circuit felt like having a glimpse.

The boat ride was short but pretty. 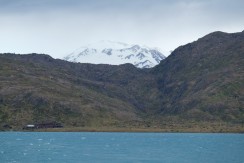 Then we got into buses and stopped at stop 1 where we signed to say we were going out.

There we also got the Torres del Paine stamp in our passport. Yeah! 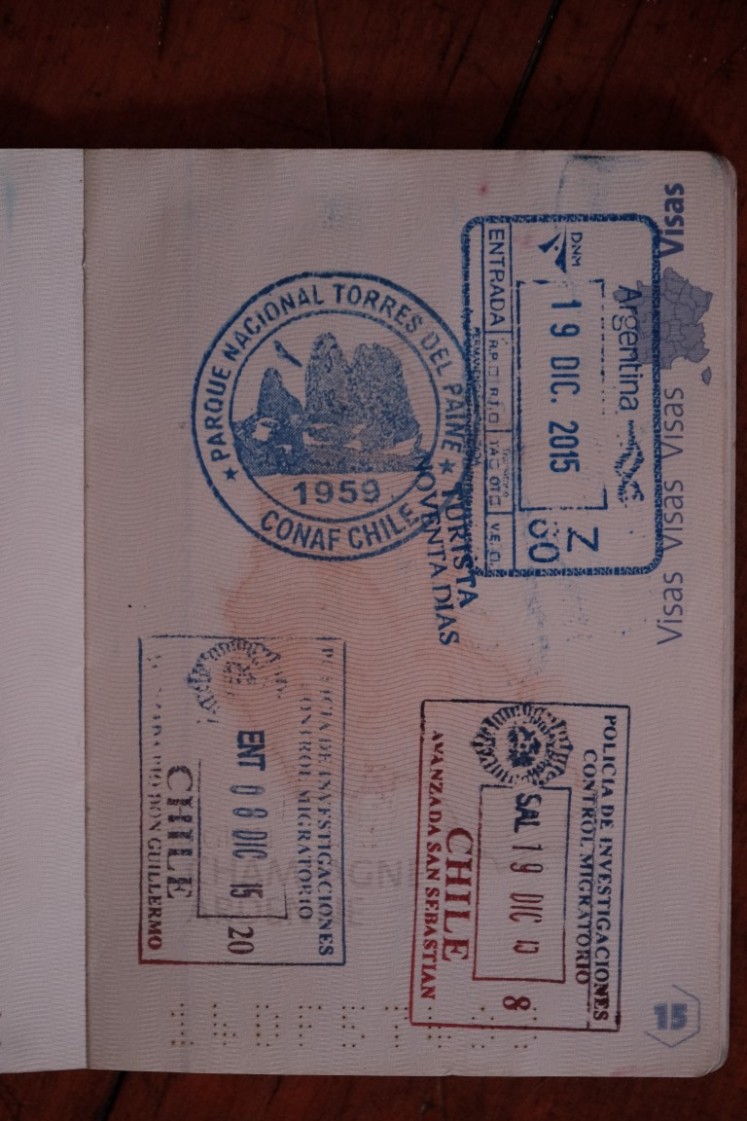 Emma and Julian had bought their tickets with a different company than mine so we went to separate buses for the way back. A few last look at the park, one last condor flying around and soon everyone was asleep! I slept most of the way back. 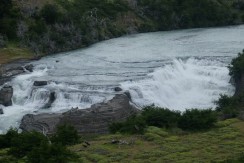 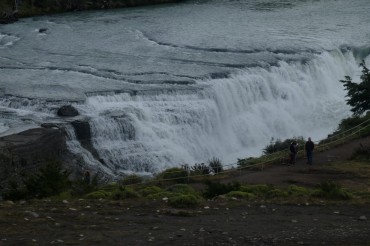 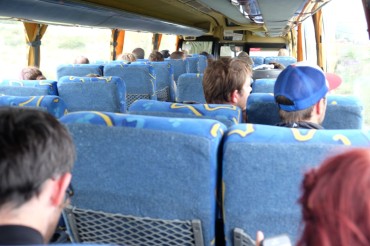 We got to Puerto Natales.

And arrived at the bus station.

At the moment I got out, I heard a voice behind me calling me. I turned and here was Fredrik, the Swedish guy I had travelled with for a week three weeks before! So cool! We started chatting. He had also done the Circuit, with another traveller he had been travelling with right after I had left Futaleufu and they had hiked the Circuit in only 6 days. So fast walkers! We decided to meet for beers near the Erratic Rock in the evening. Emma and Julian headed to Erratic Rock and I asked them to book a bed for me too there if they could.

I went inside the bus station and first queued here to buy a ticket for Ushuaia. 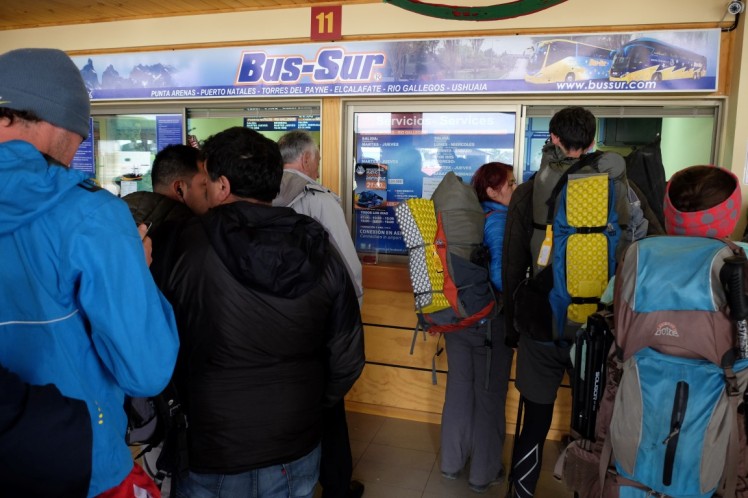 There were so many people that I went to another company, where no one was queuing. There I bought a ticket for Ushuaia for a bus leaving the next morning at 7.30am. 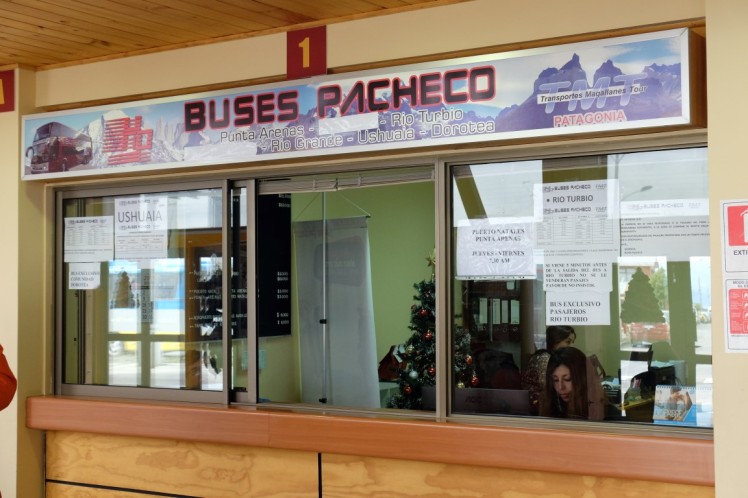 Then I headed to the Erratic Rock. It was funny to be walking on that path I had been running on 9 days before when I had realised I was late for the bus!

I arrived at the Erratic Rock and there was some construction work going on in front. Hopefully not too long, I hoped! Near it you can see the Basecamp Bar where the talk is given every day at 3pm and where people gather before and after the hike in Torres del Paine to chat. Really vibrant atmosphere!

At the Erratic Rock, I was told by the girl there that there was only one bed left, so they had booked it for me and had left to go to sleep at another hostel. Crazy lucky!

At the Erratic Rock, I grabbed all the extra stuff I had chucked in one of their backpack in storage and went upstairs to the same dorm room where I had slept but got a bottom bed this time and repacked my bag.It took me a while. Then I had a shower. Then went to Basecamp bar next door where I caught up with Fredrik and his friend Konstantin and Emma and Julian and a cool German couple. I had 400,000 Chilean pesos left because I had withdrawn so much in Pucon thinking that Patagonia would not have any ATMs so I needed to exchange these back and leave the country the next day without them if I could. I exchanged half to an American girl in my room for American dollars and half to the German couple who would make me a European transfer from Germany to my French bank account once they would be back from the Torres as I didn’t know my bank details. I felt I could trust them and they did do the transfer a week after. Sorted! Great! Then I had just enough money for the hostel, dinner and beers. We were all pretty tired and left around 10.30pm.

I caught up with What’s App and emails, it was great to be back into civilisation. Then I went to bed around midnight.