I met Enrique at 6.30am for brekky in the eating area where we swallowed our porridge with honey and fruits, yummy! 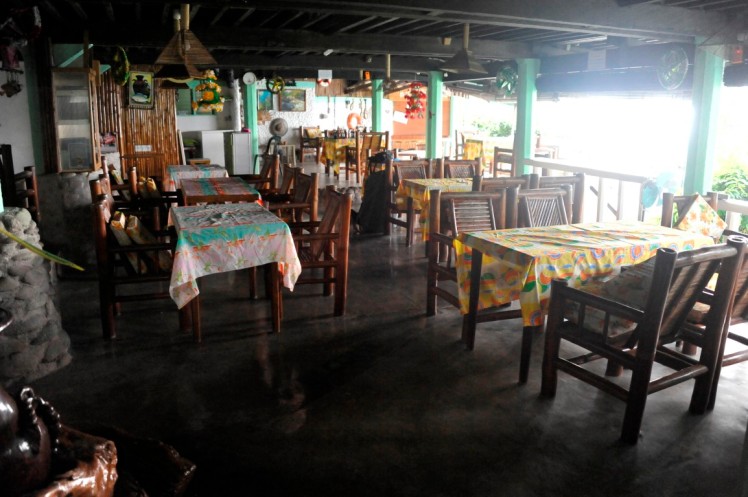 This was the terrace outside.

View from the terrace over the ocean. 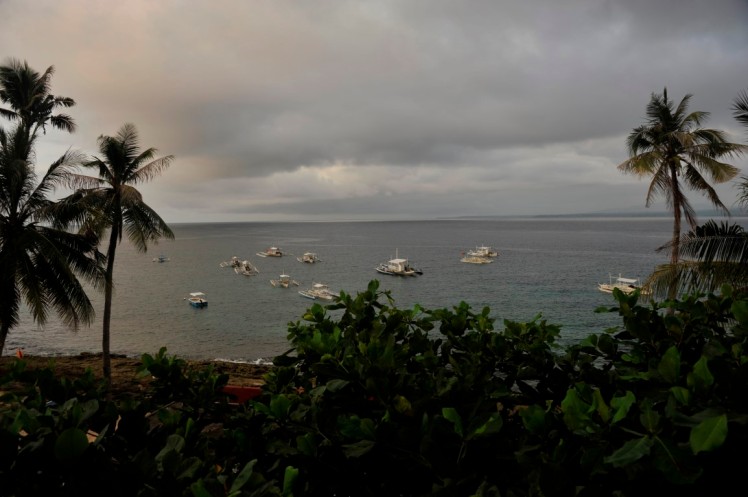 We went down to the beach and embarked on this small bangka at 7am, this time it was just us, a Polish couple who was heading to Siquijor and three crew.

And off we went towards Malatapay pier on Negros Island.

Here is a map giving an idea of where Apo Island and Moalboal are. My journey was this first boat from Apo Island to Malatapay, then car to Liloan pier, then boat to Bato on Cebu, then trike from pier to Bato bus terminal, then bus from Bato to Moalboal then trike from Moalboal bus terminal to the hostel. Pretty smooth connections though!

The three Filipinos taking us from Apo Island to Malatapay.

About to get there, there was some rain and a pale piece of rainbow. 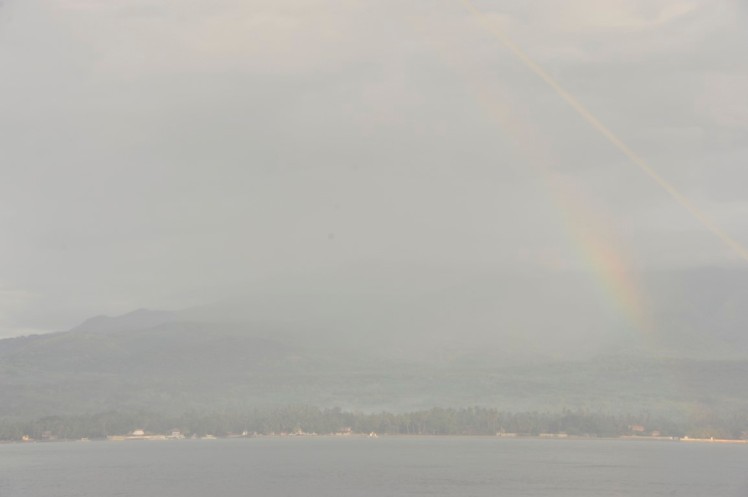 We landed on Negros and the sand is black, that’s maybe why the island is called Negros?
I had not really paid attention when going three days before from Malatapay to Apo Island.

Egmar was there waiting for us in his car, grabbed our bags, and off we were on the road in the direction of Dumaguete.

We saw a cool jeepney at the servo where Egmar grabbed some fuel.

We dropped Enrique at the airport where he was catching a flight to Puerto Princesa in Palawan. Luckily for him he was taking a direct flight as all flights to Manila were cancelled that day because of the Haima typhoon passing through from East to West in the North around Manila since the day before.

On the way to the pier, we stopped and I bought some bananas. 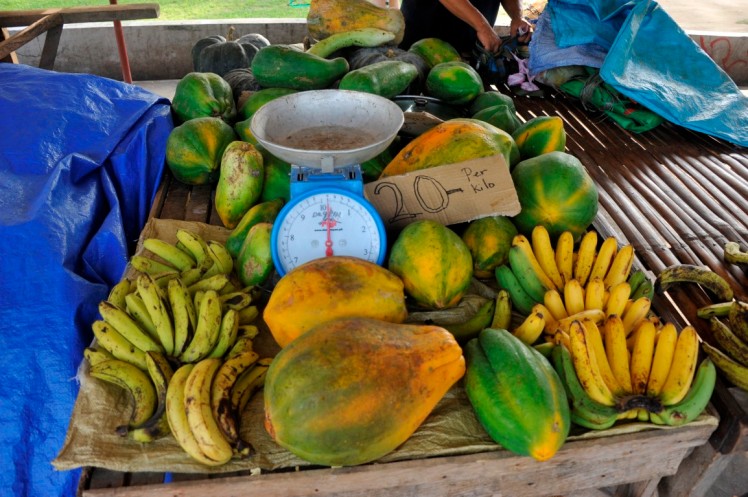 Then Egmar dropped me at the Liloan pier and recommended me to take the fastcraft. So I went into the fastcraft queue without even checking what the pumpboat was about. It was 8.20am and the fastcraft was living at 9am for Bato, the pier on Cebu Island. 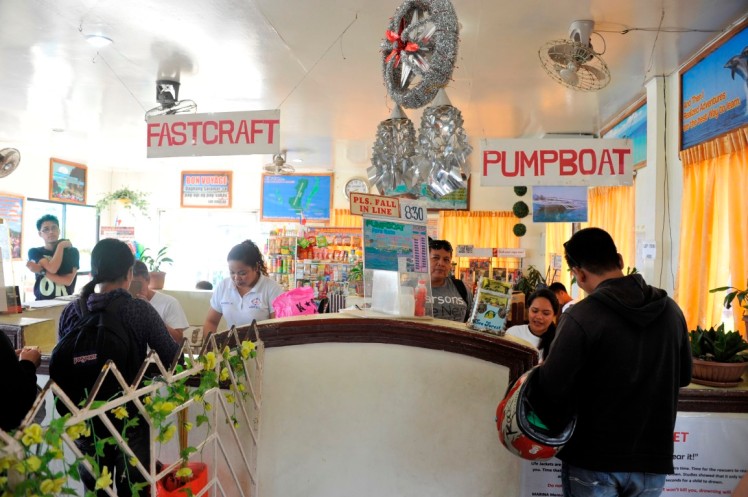 A French backpackers arrived and we started chatting and they were also going to Moalboal and enquired about the pumpboat. It was leaving at 8.40am and was cheaper. They bought tickets and I decided to do like them, grabbed my ticket and followed them.
Soon we were walking on the pier, towards the boat and wondering: Is there anything dodgy about this boat that we don’t know about? Why were all the other people still queing for the fast craft if it is leaving later for the same destination at a more expensive price?

We got to the boat and it looked like a giant bangka, but quite like a safe normal boat. 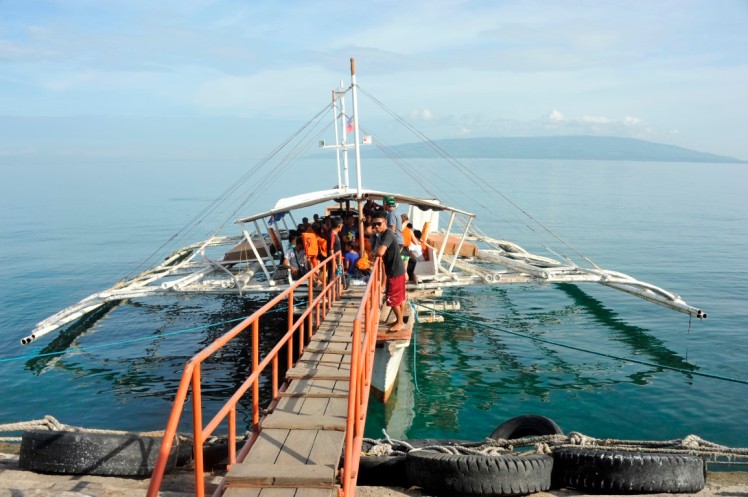 So we embarked and sat on the right side, near the exit. Here were the passengers around us. We were also given some life jacket to wear.

The ride was smooth and fine. It took us 20 minutes to arrive in Bato, on Cebu Island. Here is the bay on our left when walking off the boat. Quite a nice snorkeling spot.

Disembarking from the boat.

First we had to pay a 2 pesos pier fee.

Right after paying the fee, we jumped into a trike similar to this one I was photographing from the back of my trike. It was another 20-minutes journey to get to the ‘bus terminal’.

We got to the bus terminal around 9.20am and immediately jumped into one of these big yellow buses.

In the bus, there were some seats at the front, Thibaut and his girlfriend sat on the left side and I was on the right side, with the best view ever above the road, the kind of seat that makes photographers happy! 😀 Although there was not much to photograph from the road and the slow silent airconditioned slightly winding ride put us to sleep pretty quickly ahah.

We passed the Kawasan falls which I would have loved to have more time to see while staying in Moalboal. Another time!

Then we arrived in Moalboal around 11am and we said good-bye there as we had not booked hostels in the same area. Then I jumped into a trike which took me to the airbnb I booked which was a bunch of very nice bungalows surrounding a house / kitchen, administrated by a Filipino woman Richie and her Austrian husband Robert. Here was the inside of my bungalow. Most of the beds in the Philippines are covered with mosquito nets like here.

After dropping my backpack, I had some lunch of pasta and tomato sauce with cheese with Richie and Robert and an English guy, Ross, who had just arrived. We were talking about free diving and he was very interested to join the course. Then Inaki arrived, a Spanish guy, who was also interested in it. We created a what’s app group and I said I would let them know if they could join the course the next day without having read all the 110 pages of theory of AIDA 2. I needed to go to the centre to discuss gears and the course and we decided we would meet afterwards about an hour later to go snorkeling together. I took a trike and off I went. I arrived at the ‘Freediving Philippines’ centre which was located right next to ‘The French Coffee Shop’. Great spot.

Andrew turned out to be a very driven American guy passionate about free diving who had spent some time teaching at the Freediving HQ in Mactan near Bohol and had just arrived in Moalboal to teach alongside the legendary Wolfgang Dafert who is into the Lonely Planet and has been living in Moalboal for 10 years. We chatted for a bit about free diving, Moalboal, the various schools, the different techniques of equalisation and breathing. I asked him if Ross and Inaki could join and he said yes and if he knew a good spot for snorkeling and he said ‘Actually, the sardines are just 5 minutes walk from here! Tell them to come here, that would be the best.’ So I what’sapped them and asked Inaki if he could ask for the key to my bungalow and grab my fins mask snorkel and shorty and he grabbed these and soon was on the way with Ross. They arrived and Andrew and them chatted at length about the freediving course and they signed up.

Then we got into gears and walked 5 minutes and arrived at a rock spot from which we launched into the water and went 5-10 minutes finning away right on the big sardines group where we snorkelled for the next hour or two. It is hard to know how much time we really spent. The sardines were pretty cool. We could duck dive into them, fin down, spend some time there, then their group would close, making it darker and then go through them back to the surface. It was really fun!
Photo Copyright: Ross Carswell 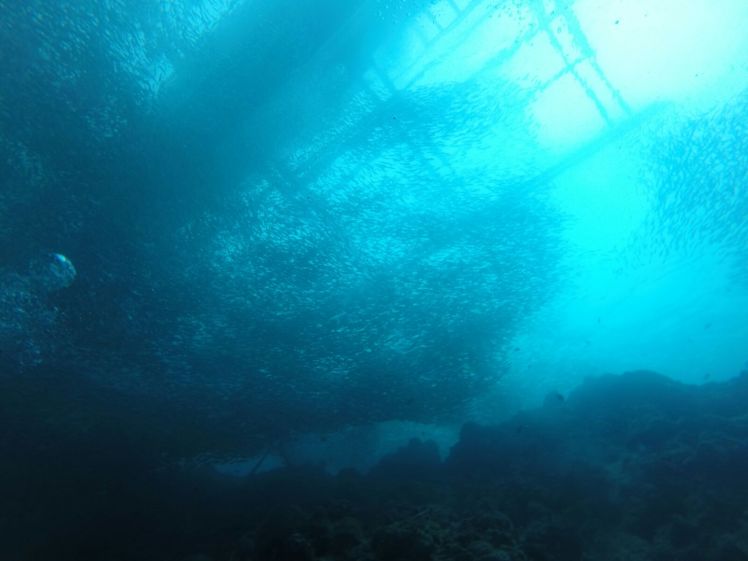 Andrew was incredibly at ease in the water, going very very deep, staying really really long, I had never observed someone being soooo incredibly at ease under water at this level. It was really inspiring to see an AIDA instructor freediving, someone whose breath holding record is of 6 minutes!!! He was also releasing perfect circles of air bubbles with his mouth, one after the other so at some point, I tried to copy him but not really well. Then I looked at Ross and him and they were pointing at something and trying to tell me something so I went back to the surface and they said: ‘There was a turtle, right next to you!’, like you can see on this picture Ross took.
Photo Copyright: Ross Carswell 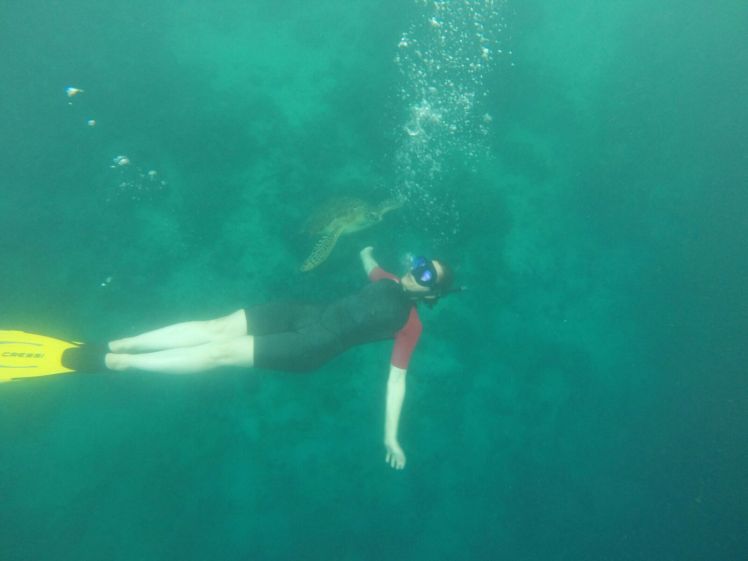 So quickly I took a long breath and went straight back down to swim alongside it and Ross took that next shot. I saw a diver chasing this poor turtle and flashing it several times to get its shot, which is really bad for the turtle and frustrating to see.
Photo Copyright: Ross Carswell 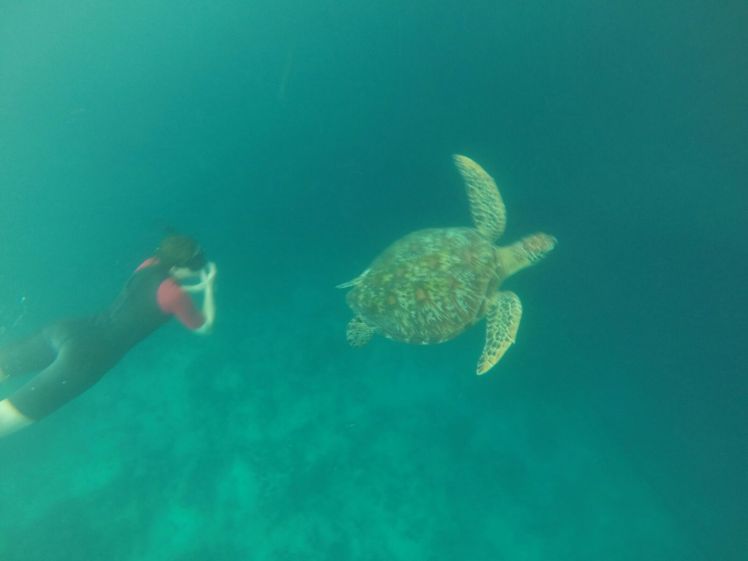 After the snorkel, we lingered around at the Freediving Philippines shop then I grabbed a trike and went ‘home’ to the Bamboo House airbnb hostel where we were staying while Ross and Inaki went first to several ATMs to try to withdraw money. I had followed the advice of 2 friends who had just come back to Australia from Philippines and had told me to bring a lot of cash as the ATMs often didn’t work or were empty and I was glad I had done so seeing how much time they spent trying to find an ATM which would have cash.

When I came back, I had a shower and then chilled in the kitchen area, waiting for them. A Dutch guy arrived, Wim and Inaki came back shortly after. Ross had moved to a cheaper hostel in the afternoon. We proposed to Wim to join us for dinner and Robert kindly offered us a lift to the Italian pizzeria located nearby where we met with Ross.

The four of us had an awesome dinner, chatting all night about travelling and diving and freediving mostly. Wim was working as a uni teacher in Rotterdam, teaching students about communication and psychology. He had left home young and created a dive centre in Thailand with a friend that he managed for 5 years then had gone travelling all around the world, with some crazy experience like driving from Morocco to the border with Ivory Coast, being surrounded by aggressive guys and wondering what he was doing there on that roadtrip adventure. He had amazing travel adventure stories to share. Ross had also done extensive travelling. He was working in Finance in London but had taken a 6-month break the year before and travelled all countries which had a border south of China from India to Vietnam, so including Nepal, Bhutan, Myanmar, Thailand and Lao. He had also been to South Korea AND North Korea which he said was a very interesting experience, and after working a bit, he was taking some more months off again, with the desire to become a dive master and travel and work all around the world. Inaki was from the Spanish Basque country near San Sebastian working in a Packaging factory and could tell us a lot about all the stuff packaged and had also travelled a lot around the world. It was a great evening spent chatting and chatting and chatting with no phone on the table except the moment where I shared with them the freedive AIDA2 course book they had to read for the next morning!

We walked back to Frank’s place hostel for Ross and a bit further to the Bamboo House for Inaki, Wim and me and went to bed.