Andrew and Wolfgang picked me up then we picked up Ross and Inaki and we went this time near the Sampanguita Reef dive site, at the house of a the former landlord of Wolfgang where he had lived for 6 years. We could understand why he had chosen this spot, it was the perfect spot for a free diver, right in front of a quiet ocean where there was no one and where he could practice very easily.

We first did a bit of theory and went through the gears of a freediver.

When choosing fins, it is best to take some which are flexible that way it will take less energy to fin down. Choosing some which blade can be swapped later on for a better material is also good. Rubber fins are the cheapest and have different levels of flexibility. Fiber Glass and Carbon Fibre are lighter but Carbon Fibre breaks easily. Masks are better fitting the head and not being tinted to see the eyes. The weight belt is made of rubber instead of fabric so the weights can be moved more easily. We each had 2 kilos of weight on our belt during the training sessions. If practising on the line, then getting a buoy which can be used to rest and the line and weight to put at the bottom of the line to hold it still helps.

After this short session, we had a bit of chilling and chatting about freediving.

Then we were ready to jump into the water and walked on a path to the sea. 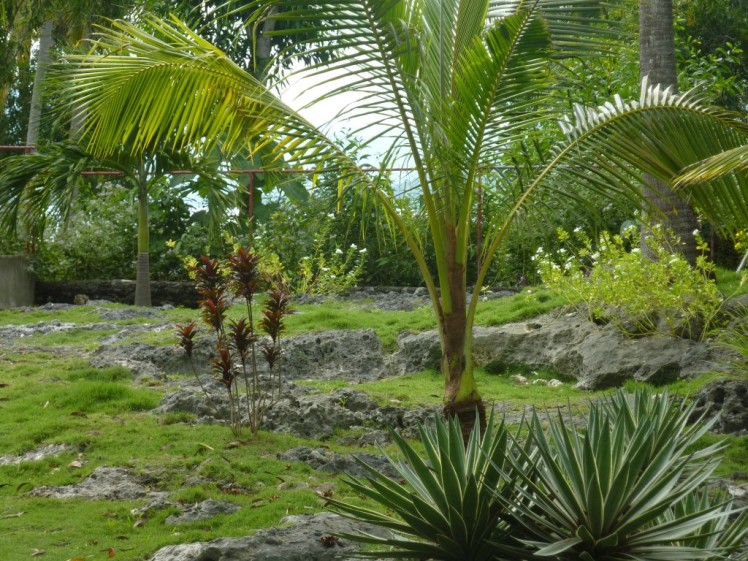 There we put our fins, mask and snorkel on and went to an old abandoned fisherman’s boat to which one rope was attached to stabilise the buoy. Then Drew setup the line to 12 meters deep. We first practised going down feet first and then Drew taught us the duck dive technique then we started practising going down vertically along the line head first which was much harder because it was so hard to equalise. There was one moment where I managed to go to 11 meters and Ross seeing me go down thought ‘Fine, I can do it too!’ ahah so he went to 11 meters too. At that stage we both felt like if the line had been deeper we would have been able maybe to go further down but it was the morning session and the line was only 12 meters deep. As for Inaki he had more problems equalising sadly. After this morning session, we had some lunch and some theory but I was really falling asleep so we all agreed on a short 20 minutes Spanish siesta. Inaki explained to us that in Spain, when taking a siesta, people would originally hold something metallic, a spoon for example, in the hands which would be outside of the bed and when the spoon fell on the floor, it would wake them up and mean that they had enough sleep during their siesta. Interesting idea. I just put my alarm clock for want of a spoon I didn’t have.

After the siesta, we were a bit fresher to listen to more theory and also did an interesting experiment where we took turns putting our head into a bucket of water while having an oximeter alias a finger oxygen measurer on our finger. As soon as the head is in the water, the heart beat slows down. It is interesting to think that our body adapts very quickly to the environment it gets into.

After that interesting experiment, we went back to the sea and spent a good 3-4 hours again at the line, simply taking turns practising the duck dive and going down. We also learnt the rescue technique. First of all when a freediver goes down, his buddy on the surface has the mask and snorkel on and watches him go down. Then when he starts going back up, the buddy at the surface looks for signs that would show something is not normal, for example if the freediver released air from his mouth. I forgot to mention that a freediver never keeps his snorkel in their mouth when they go down. This is because it makes it harder to equalise but also because it is in the way of saving them if they blacked out. Some other signs that something is wrong is if the freediver seems to fin differently than usual or with less energy with a head a bit wobbly. Also the buddy takes a deep breath and goes down to meet the freediver on the last few meters to look into his eyes and go back face to face near him to the surface. Research and experience have shown that when there has been freediver death, it was because they were freediving alone and also that blackout can occur within the last few meters before the diver reaches the surface or right at the surface. In case of a blackout underwater, the buddy grabs the head with one hand under the chin and one hand on top of the head to bring back the freediver to the surface. Once at the surface, the buddy swaps hands and pulls the mask of and holds the head above the surface and removes the mask and blows on the face and calls ‘Hey Drew, breathe! Drew, breathe!’ and gently taps the checks of the diver. Usually the freediver would start breathing again after the first blow on the face. If the freediver doesn’t breathe after 10-15 seconds, then the buddy needs to pinch the nose and open the mouth and blow air and then do it a second time. Again it normally often triggers the body to react and expel the water and triggers the diver to breathe again. Luckily, these are just standard emergency procedures to be aware of, and the more we know them the better, but it rarely occurs that someone would do a blackout.

We also kept practising going down, head first, trying to fin down to 16 meters so that we could fin back up but we didn’t manage to go further than 11 meters because of equalisation so none of the three of us passed the AIDA 2 certification. Ultimately it doesn’t matter as what matters is more the learning we got out of these two days.

After a quite long afternoon session, we went back to the shore then the house then showered, changed clothes, immediately put tons of insect repellent as we were getting devored by the mosquitoes then we drove to the centre where we spent some time doing the final quizz of hundreds of questions. Drew was enrolling afterwards two students for the coming days and with Inaki and Ross we went to the nearby pizzeria and grabbed a table. They went off to withdraw some more money, Drew arrived shortly after, we chatted and chatted about freediving, then Ross and Inaki arrived and we celebrated our introduction to the incredible and mystic world of freediving and our 2 days spent focusing on the most important activity the human does all their life from the moment they are born until the moment they die: breathing!!

We finished at the restaurant quite late then went ‘home’.

The next day, off to Cebu to embark on a liveaboard for a week of diving!