At the airport, I had some dinner first as I was early then queued to register my luggage. 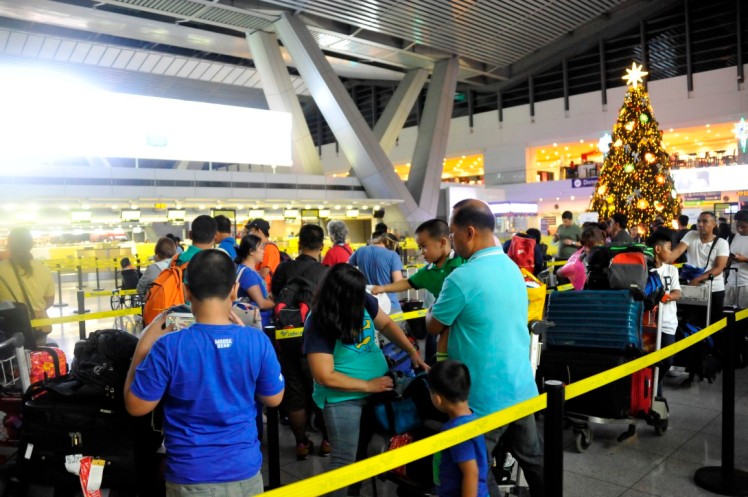 The main open question was: Will I have to pay an airport terminal fee or is that included in the ticket? There used to be a tax of about 750 pesos. It was impossible to find a clear answer! Even the embassy of Philippines in the US was stipulating on their website that everyone had to pay it.
http://www.philippineembassy-usa.org/about-the-philippines-dc/

After registering the luggage, I did like others, I charged my phone!! What would we do without these charging stations nowadays? 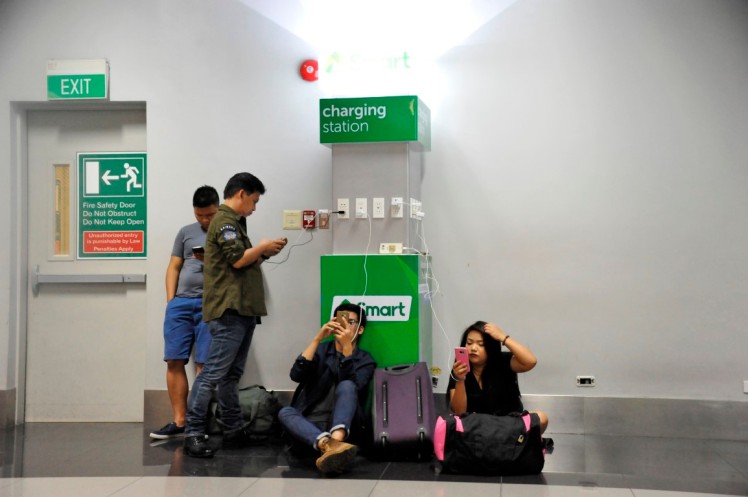 There was a very bad surprise waiting all passengers. The water bottles got confiscated! I found it so unfair and absurd. It is a common rule in most airport that you can’t have a bottle of more than 100ML before you go through the x-ray luggage scan. They take the bottle then. But once the scan has been done, often it is possible to buy water in the enclosure of the airport before to board the plane. So I had used my last pesos to buy 2 small bottle of waters as they didn’t have any big ones. I was really annoyed to see them confiscated, and I could tell most people were also very annoyed and taken by surprise, otherwise why would 200 bottles be confiscated then? 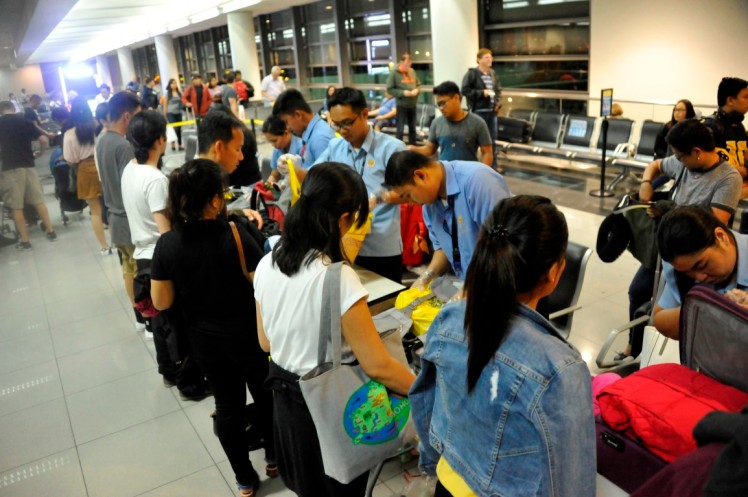 Lots of bottles on the floor even a multi-plug charger. How absurd can humanity be sometimes. How greedy such an airline company which abuses of the law to do this so that people are forced to consume and purchase water during the plane trip. 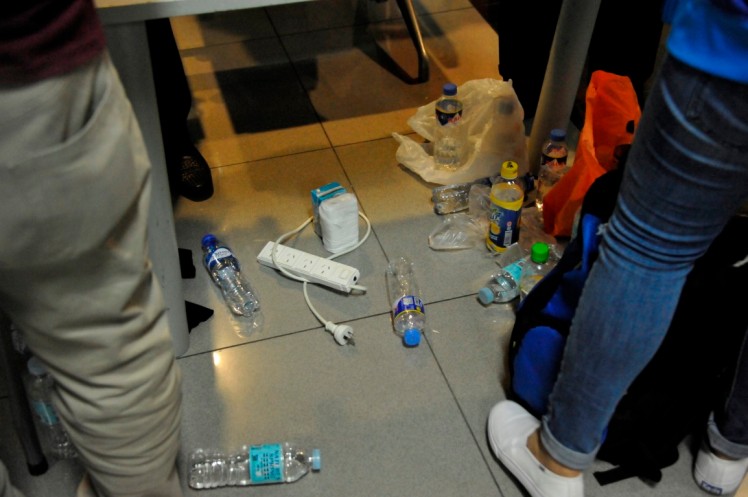 The plane took off with a 10-min delay only and we said good-bye to Manila.

Here is a map of the plane journey.

I tried to sleep a bit, but it was really cold and I had forgotten to take my sarong with me to use it as a blanket. Luckily I had my jumper in the bag. Cebu Pacific was not distributing blankets, and making money on this too, offering to rent them for 10 dollars. I decided I would not fly with them again for a long flight. No movies, no food, no drinks, no blankets. Flying during the high travel season, my plane tickets was not even a low-cost price. Not happy! I ultimately managed to get a few hours sleep during this night flight.
The dawn from the plane was beautiful. Rather than flying North – South, we flew towards the East for a good part of the journey so didn’t get to see the sun rising. 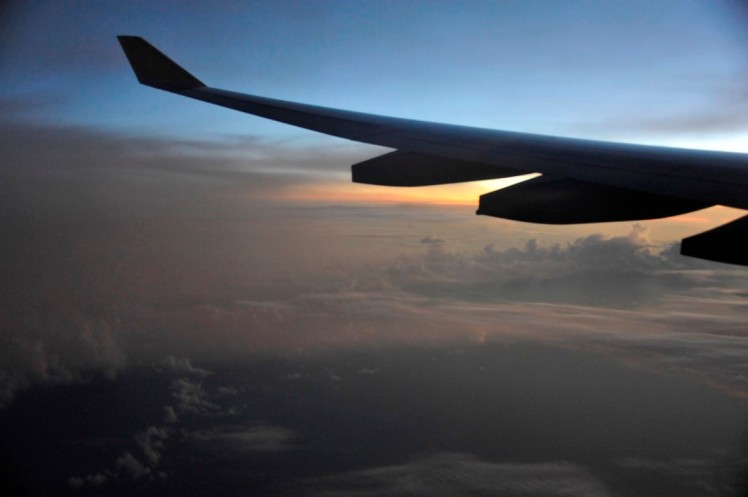 At some point we had this view over the coasts of Australia and I wondered if the island which looks like a Manta near the 2 islands top right corner might be Magnetic Island, but maybe not. I pondered on where we were.

Some other view from the plane. 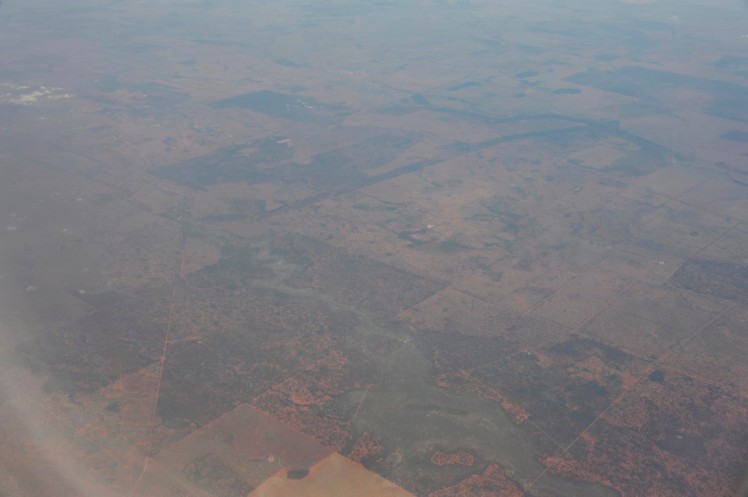 An hour before landing, the cabin crew sprayed some chemicals around, making a few people cough. Yuk.

It was very exciting to get closer to Sydney, to see from the plane the meanders of rivers, to spot on the horizon the Norfolk Pines of Manly beach, North Head, South Head, to then see Spectacle Island and Cockatoo Island from the plane, then the Harbour Bridge and Opera and all the skyscrapers near them and finally the container harbour. 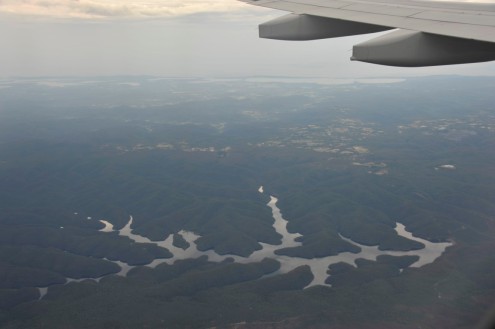 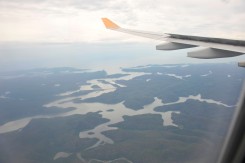 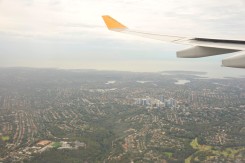 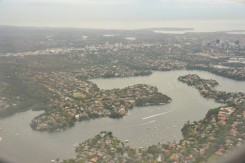 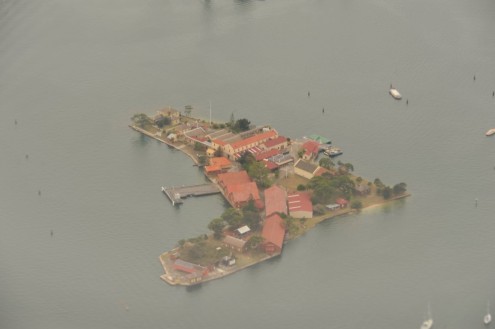 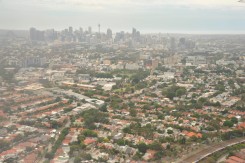 And before we knew it, we had landed! 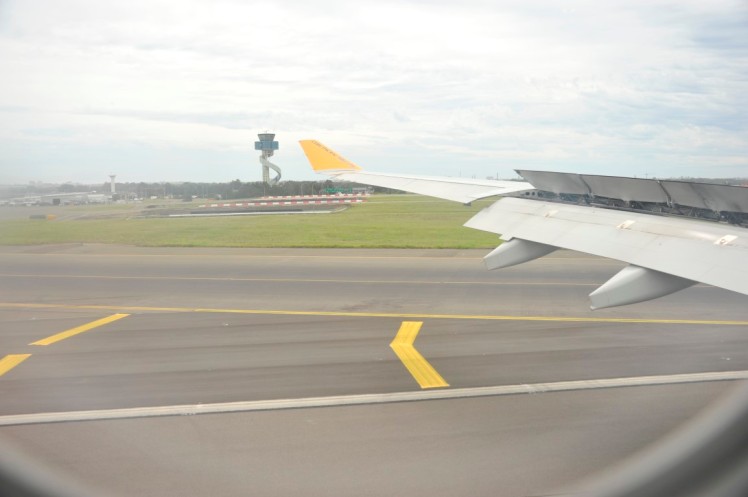 I was one of the last ones to exit the plane. 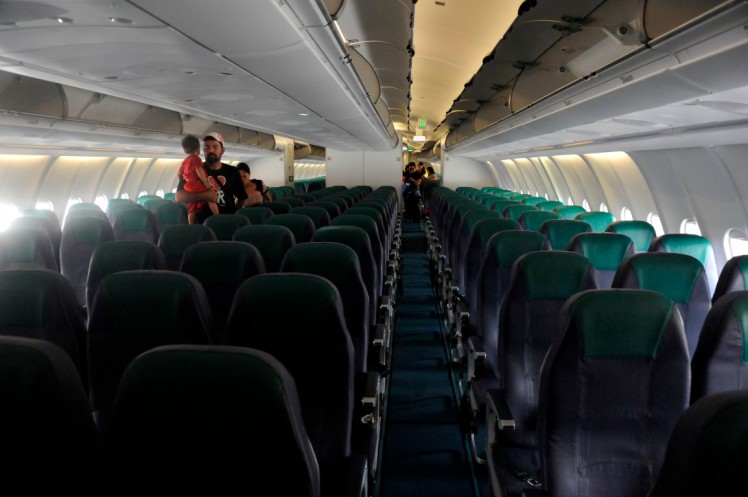 My ePassport scan didn’t work so I had to queue with the Non ePassport.

Waiting for the big backpack.

Waiting for the train to Circular Quay.

When I arrived, I had just missed a slow ferry and didn’t feel like waiting for the next so jumped onto the fast ferry. Saying hi again to Sydney Opera.

Bye to the Collaroy still docked which is usually the allocated ferry to the 8am ride I do in the morning when going to work.

The ferry ride back was great because there was a lot of sailing boats out probably doing a sailing boat race. We also passed the three other slow ferries, the Queenscliff, Narrabeen and Freshwater ones. 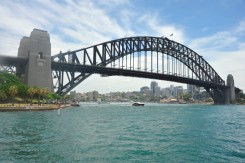 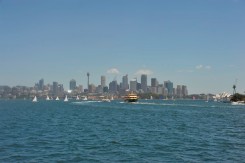 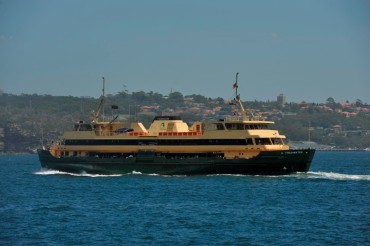 And soon we arrived in Manly!

The Corso had not changed much. 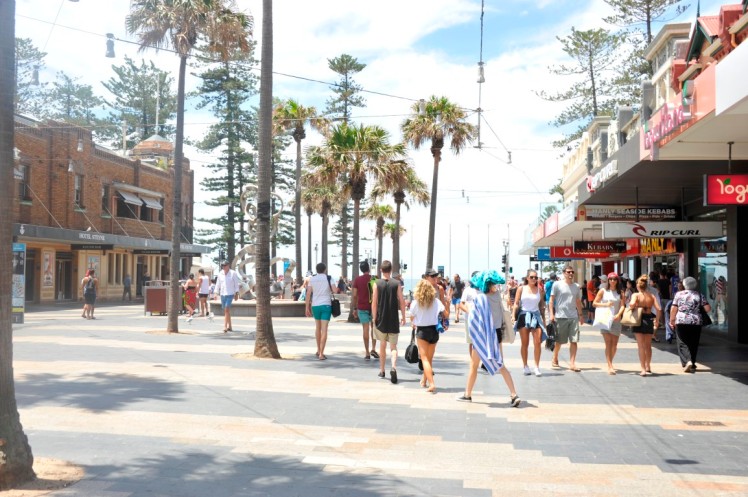 I arrived at the beach and it was nice to watch myyyyyyy ocean. Which looks different from Manila’s sea. It was a normal Saturday in Manly, people sitting or lying on the beach, chatting, chilling, reading, some surfers in the water taking waves. I walked past the volley-ball courts and saw my volleyball friends Philippos, Luciele, Adrian and a guy I didn’t know who were playing. I walked further and reached the North Steyne Lifesaving Club and within a few minutes more of walking, I was back home! 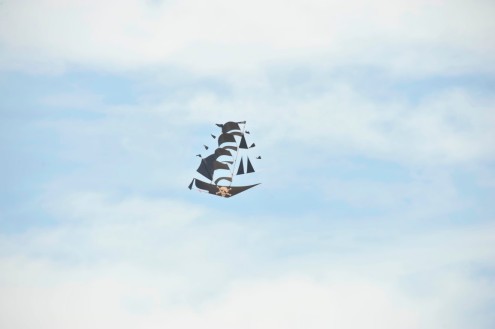 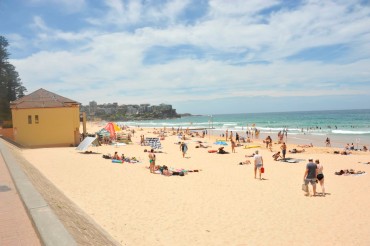 When I opened the door, both my flatmates Gemma and Coral happened to be there so we chatted for half-an-hour, catching up on everything. Then I spent the rest of the afternoon doing washings and chilling and was happily back playing on the volleyball court the next morning!

Here is a map summarising the blurb of itinerary I took while in the Philippines, going from Manila to Apo Island then to Moalboal then to Cebu, spending a week in the sea around Cebu / Leyte then going to Tagbilaran in Bohol, then flying to Manila and Busuanga, going from Coron Town Proper to El Nido and flying back to Manila.

As you can see on the map, the area I got to see in 3 weeks is very small. You could easily spend a few more weeks in Philippines and still have places to explore. I would love to go back and dive the Japanese wrecks in Coron, or go on a liveaboard to Tubbataha Reef in the Sulu See, located a bit above the letter S of Sulu. I could do with going to the North of Luzon and seeing the Unesco-patrimony rated rice fields and taking a bus to go all the way to South Luzon, checking out the Mayon volcano there. I could do some more diving from Alona Beach in Bohol and explore for a few days this island, spend some time in Boracay and Siquijor, spend a week explore Negros and Mindanao. And that’s not even mentioning the northern islands of Philippines, the Batanes Islands, and going from the Northern Tip of Luzon to Taiwan, or navigating the Sulu sea or navigating further around Palawan or going to Port Barton to chill a few days and to Puerto Princesa and further south. So many places to see in this archipelago made of 7,107 islands! And some people dare say that 10 days is enough to see the Philippines????!!! Surely, they don’t really know what they are talking about or haven’t spent much time looking at a map…

So if you haven’t been to the Philippines yet…rush there before it is as developed as Thailand!!