We rented a car from Redspot at Sydney Domestic Airport and drove to Canberra from 7.30pm to 10.30pm.

We ate some wraps we made in the car on the way using a spork and the swiss knife. Wrap recipe for an easy and quick road-trip meal: The wrap bread itself, some kiri cheese, easily spreadable without leaking and some salami. Quick, tasty and filling. Add to that some apple compotes bought in the baby food aisle and some chocolate and lunch or dinner is sorted! 🙂

We arrived at the airbnb we had booked and met Sandra, the owner with who we chatted for a while before to go to bed. Sandra was from Darwin and had worked a lot in mining there but after 30 years, once her kids were now grown-up, she couldn’t stand the heat anymore and had moved to Canberra and liked it too here. We went to bed around midnight. This was the only shot I took of our drive off to Canberra that evening! 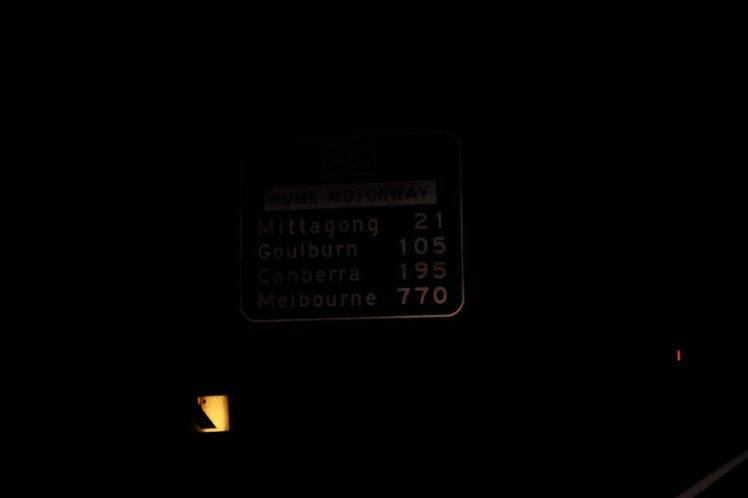 Sandra’s place was really quiet and we slept so well we only woke up around 9am. We prepared some brekky with cereals we had brought and powder milk and chatted longer with Sandra. She told us about her daughter Jacci Ingham who is a storm chaser and who published a small book I bought from Sandra the next day about the art of weather photography. Her website has incredible photos: https://jacciingham.com/
If anyone is going to Canberra, we would definitely recommend staying at Sandra’s place: https://www.airbnb.com/rooms/15733071 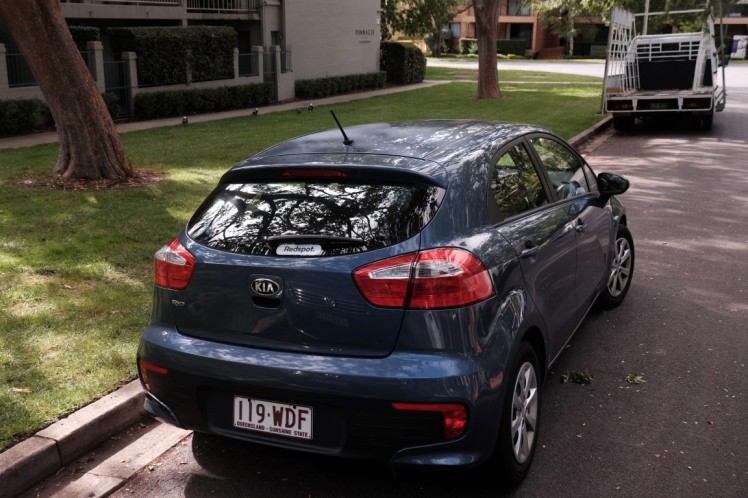 After getting a bit lost in Canberra, we finally found the right road off to Kosciuszko.
Here was our itinerary to Charlotte Pass.

Zooming out, that’s where it is on the Australia scale:

We left the Australian Capital Territory and entered New South Wales again and passed the sign ‘Welcome to the Snowy Mountains’. On our left, it didn’t really look snowy, rather rainy. 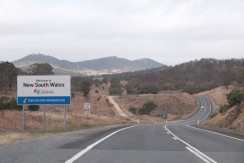 On our right, the most interesting thing was a field full of solar panels. By googling it afterwards, it turned out to be the largest solar panel farm of Australia based in a small town called Royalla and developed by a Spanish company called Fotowatio Renewable Ventures (FRV). It contains 83,000 solar panels able to power around 4,500 ACT homes. It is the first time such a large-scale solar farm is being connected to the national electricity grid. The ACT aims at using 90% of renewable energy for its needs by 2020. 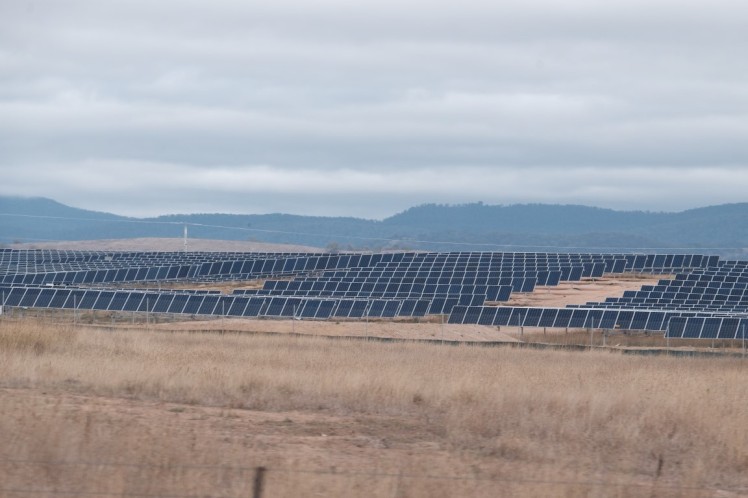 We stopped briefly in Cooma to get some salami and kiri refill and saw these teenage girls offering a car wash for 5 dollars. 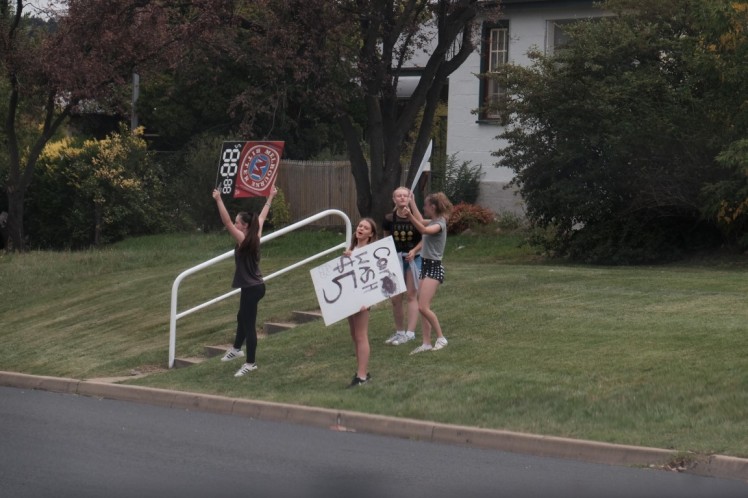 In Cooma we also saw this really cool orange car.

And off we went again from Cooma to Charlotte Pass. We saw a giant hayball, and some trees that look dead but maybe are not. We passed the sign heading to Kosciuszko. We passed Lake Jindabyne, continued and arrived at the entrance of the Kosciuszko National Park where we paid the car entrance fee then entered the park. The car lines on the ground turned from white to yellow. We continued and passed the ski resort empty stations and the poles spread on the hills. 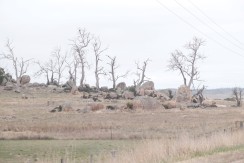 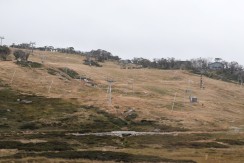 Then we got to the car park at Charlotte Pass and parked along the road as everyone does there.

View of the valley

To the right the Charlotte Pass resort.

At the lookout, here was a map of the hike we were about to do, starting with the Summit walk, sleeping near Mt Kosciuszko then coming back the next day via the Main Range Track. 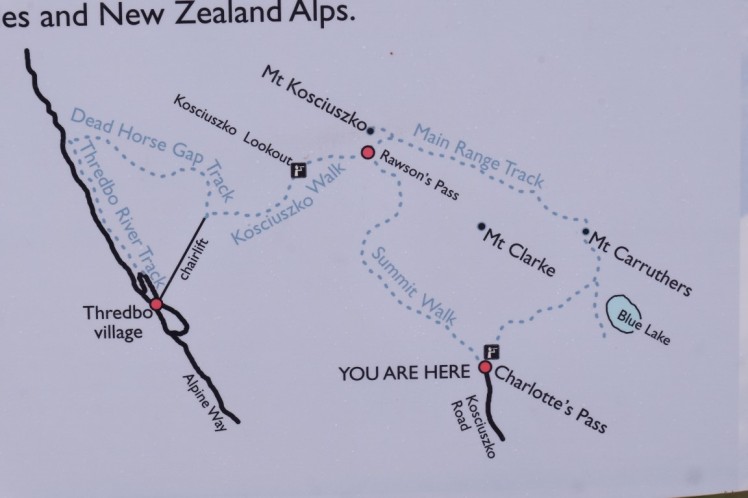 In the distance, Mt Kosciuszko. I was expecting the summit of Australia to stand out a bit more the way the Mighty Mt Blanc stands out but it was just one more of the rounded hills around. At 2,228m, the highest point of Australia is not that high at the end.

Here was the beginning of the walk. 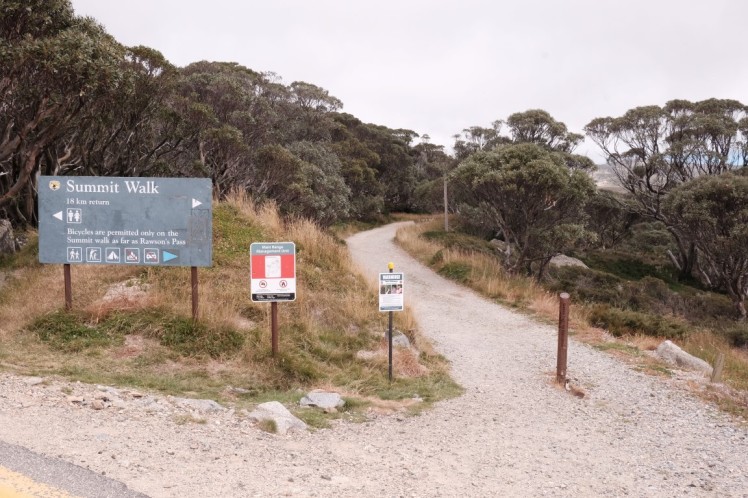 Some warning about the mouse-ear hawkweed, a yellow flower quite common in Europe.

That sign explained among other things that between 1909 and 1976, many cars made it up to the Summit on the track. It became a walking track in 1976. It also used to be an important place for Aboriginals in the past. 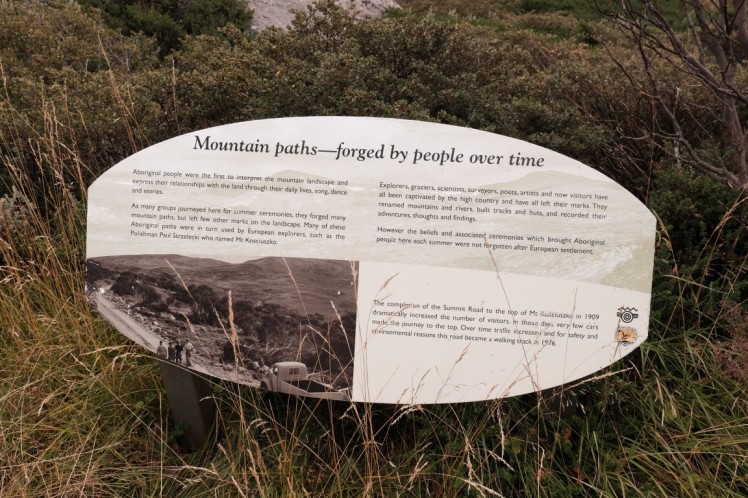 We started the hike and the landscape was really pretty.

That day was a short hike as we only walked about 6 kilometers from 2pm to 4.30pm to Seaman’s hut. The landscape was beautiful though and we passed the Snowy River. 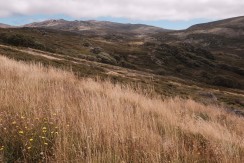 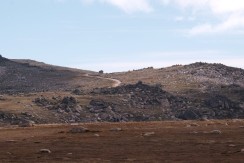 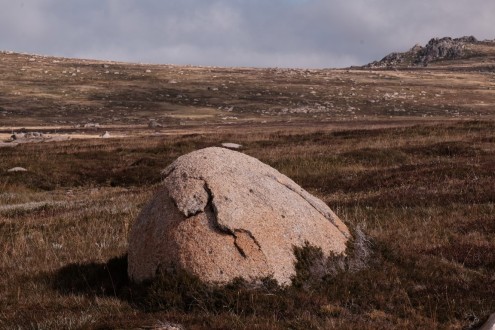 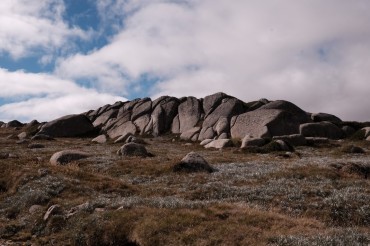 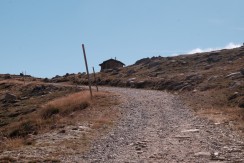 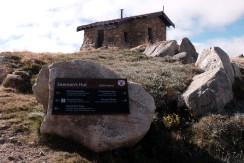 We arrived at Seaman’s hut which was built by the parents of Laurie Seaman in 1929 after his death and the death of a friend of him, Evan Hayes in a storm on 13th August 1928 . The hut was built to be used as an emergency shelter in the case of snow storm. Sadly, four snowboarders died on 7th August 1999, nearly 70 years after, in a snowcave they hade made themselves which collapsed on them, about 1.5 km south-east of Seaman’s hut. Their bodies were found three months later after intensive research. After that, on 13th May 2013, a Canadian bushwalker Prabhdeep Srawn disappeared on a snowy day and no one ever heard of him again or neither found his body. 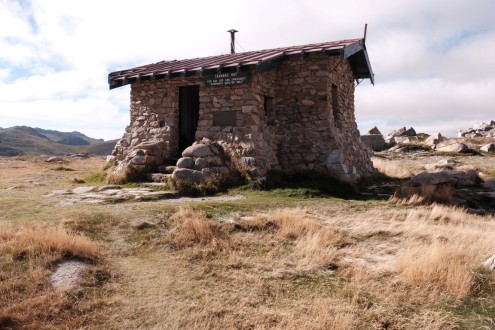 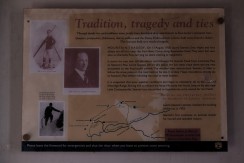 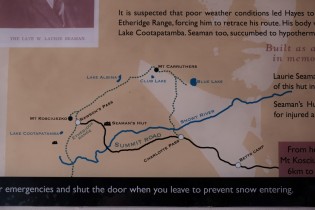 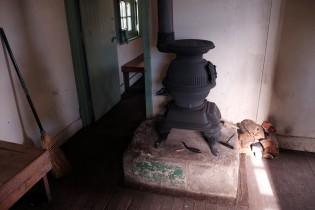 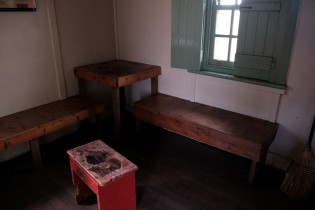 We were lucky that week-end to have a pretty stable weather and pitched our tent a bit further behind Seaman’s hut. There was no one around and a beautiful 360 degrees view. The temperature dropped quickly but we were prepared and I just added more layers and put on my leggings / hiking pant / rain paint + 5 layers, hat, gloves and scarf as the temperature was now about 7-10 degrees. I was glad to have brought my -10 degrees Sea to Summit sleeping bag! 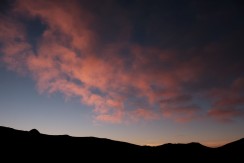 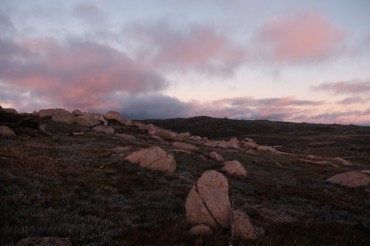 One of the last shots of the evening. It was awesome to sit on those rocks and contemplate the landscape with such a great view far far away and with no one around and an incredible silence. I really enjoyed listening to the silence!

Next day, let’s go to the top of the highest point of Australia and finish the loop back to Charlotte pass!