We took the 9.45am train from Vladimir off to Moscow. At the train station was an old transsiberian locomotive. Then the modern one arrived and we boarded the train. The landscape was mostly pine trees and at 11.26am sharp we arrived in Moscow. 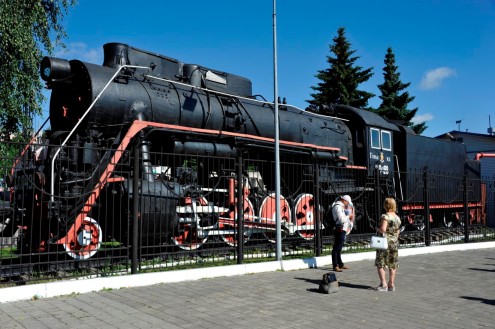 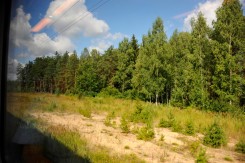 I said good-bye to my parents who continued their way to their hostel and I went outside of the train station. A few minutes later, I saw my friend Yelena coming towards me. It was exhilarating to catch-up as we had not seen each other for 11 years!! We had met and studied together in Michigan for a year in 2006 and then Yelena had gone back to Kazakhstan and me to France then London then Australia. Yelena had moved to Moscow a few years ago and I had already planned to come see her in 2015 when planning a trip there but had changed my mind and gone to South America instead. So finally, here I was, finally coming to see her in Moscow and reuniting was great. And although time had flown since, it did feel like we had seen each other only a few months before. How strange is this feeling each time you see someone not seen for long, as if you actually had seen them recently and that no matter what happened in between doesn’t impact this feeling of still being connected and bond to a strong friendship! We drove away from the train station and within 20 minutes passed some iconic landmarks of Moscow such as the Kremlin, the statue of Vladimir the Great, the Church of St Simeon built in 1676, Hotel Ukraina, and also the Triumphal Arch of Moscow. That monument is interesting as it was built in 1829-34 to commemorate the Russian victory over Napoleon, copying the French Triumphal Arch of Paris which had been commissioned by Napoleon in 1806 to commemorate his own victories, especially the one at Austerlitz. Ironic!

The statue of Vladimir the Great at 17.5 meters high is also an interesting one as it was only built in November 2016 and is meant to encompass the unification of Russia but is also known to be really controversial. There is an interesting article about this here: http://www.telegraph.co.uk/news/2016/11/04/vladimir-putin-unveils-statue-of-medieval-namesake-who-united-ru/ 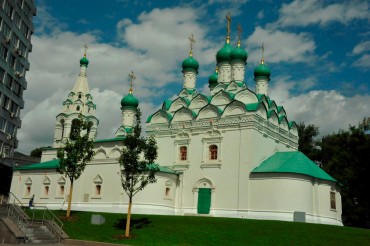 The highway going away from Moscow centre to its outskirt was huge with 5 sometimes 6 lanes on each side of the road!

We arrived in the building complex where Yelena and I met her husband Vassili, son Timmy and daughter Zlata. The view from their flat was really beautiful. Yelena, Zlata in her pram and me went for a walk down to the river where Vassili and Timmy met us later on. We had great fish and chips there, the rain came at some point and the cafe handed to us blankets, then the rain was gone and we could enjoy again. We spent the rest of the afternoon chatting and chatting and chilling and catching up. 11 years of time to catch-up, that’s a lot! 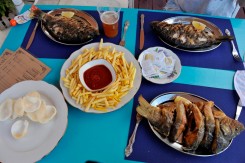 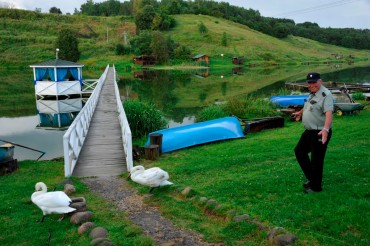 On the Saturday night at midnight, Vassili went to pick up his mum and auntie who were coming back from a 10-day trip in Turkey. It was nice to meet them in the morning and try to communicate in Russian with them. Hearing all of them speak Russian all the time helped me a lot to improve my understanding of spoken Russian. We had a late brekky then Vassili, Yelena and I headed to the famous Bolshoi theatre built in 1824 which went through a huge renovation for 6 years from 2005 to 2011. Bolshoi Ballet is the oldest and most reputed in the world but unfortunately they don’t play in summer. 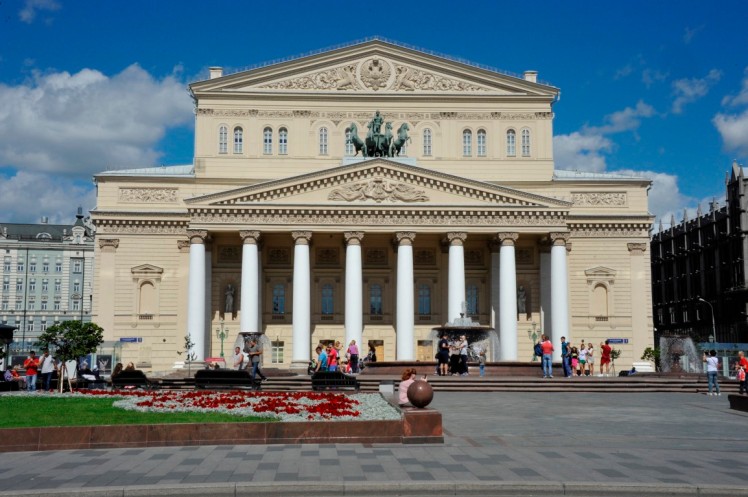 We met there with my parents then we headed to a place where we had some burgers for lunch. While Yelena and my mum went to get tickets for the Kremlin, Vassili, my dad and I walked to the famous Red Square.

Here is a beautiful French song about this Red Square from 1964 sang by Gilbert Becaud, written by Pierre Delanoe, called Nathalie. The song goes like this roughly ‘The Red Square was empty, my guide had a beautiful name, Na-tha-lie. She talked about the October Revolution, I already thought about the Pushkine Cafe where we could go after the visit to drink a hot chocolate. Then we went back to her student room where lots of her friends waited and we talked about the world, Russia, France, champagne. Then they left, the room was empty and we had nothing else to talk about after that. Now I feel empty without her, but waiting for her to come to Paris so that I can be her guide there.”

Then we walked to St Basil’s Cathedral. It was built in 1561 under Ivan IV (Ivan The Terrible). The legend goes that Ivan IV was so happy with it that he blinded the architect so the architect could never build another cathedral as beautiful as this one.

Then we walked all around the Kremlin and then met with Yelena and my mum and went inside the Kremlin where we visited a few big famous churches and saw a big bell and some canons. The Kremlin is the heart of Moscow and the seat of the Russian government. The site has been continuously occupied for at least eight centuries.

The Bell we saw is called the Tsar Bell and at 200 tons is the heaviest in the world. The piece standing beside it broke off during the fire of 1737.

The Tsar Cannon nearby is the largest-calibre cannon in the world.

Some photos inside the Kremlin where we visited the Cathedral of the Annunciation. 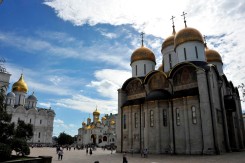 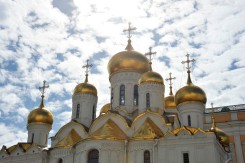 Here is a very short history of Moscow:
Moscow was founded in 1147 by Prince Yuri Dolgoruki. The Mongols invaded and razed the city to the ground in 1238 and for 250 years Moscow had to pay an annual tribute to the Mongol Khan. In 1326, Moscow was made the seat of the Russian Orthodox Church which meant it was proclaimed Capital of Russia. In 1380, the Mongols were defeated but Moscow still paid them the annual tribute until 1476. Between 1462 and 1505, under Ivan III (Ivan The Great), lots of things were built in the city. Italian architects were commissioned to redesign the Kremlin and many cathedrals and churches. Under Ivan IV (Ivan The Terrible), lots more was built, although as a tsar, he was known to be very cruel. In the 17th century, there was a peasant’s uprising and an invasion from the Poles and Lithuanians. When they were driven out in 1612, the city was again burnt to the ground. By the end of 17th century, it had become the most important trading city.  It remained a major city but Peter The Great transferred the capital to St Petersburg in 1712. The last sacking of the city occurred in 1812 when Napoleon invaded Russia but Moscovites torched their own city rather than seeing Napoleon take it. Some say that they were scared that Napoleon would destroy it. Some others say that Napoleon had no intention to destroy Moscow but just wanted to live in it for its army to rest a bit. All in all, by torching it themselves, Moscovites made sure that no food supply was left for Napoleon’s army, which resulted in his army having to come back the way they came as the winter was harsh and they had no food anymore.

End of the 19th century, Moscow became a revolutionary centre and in 1905 then 1917 there were uprising and the Soviet Power took control over the city. Between 1917 and 1922, between 7 and 12 million people died in Russia during the Civil War. In 1918, Lenin transferred the government back to Moscow. Between the two world wars, the city embarked on an ambitious programme of industrial development. By 1939, the population had doubled to 4 million people. During WWII, the factories were relocated to the Urals. By 1941, the German army had gone very close to Moscow but didn’t get inside. After the war, Moscow was rebuilt in size, grandeur and power until the Soviet Union collapsed in 1991. Moscow now counts 12 to 17 million inhabitants (in a country of 144 millions).

After visiting the Kremlin, we saw the statue of Vladimir the Great from close, and drove to a view point from which we could see the city. Then we had a small walk in the nearby forest then drove to see the Moscow State University from various angles. It was built in 1947, its tower is 240m high and its architecture is completely symmetrical and looking the same from all sides. It was commissioned by Staline along 6 other buildings and therefore is called the highest of the ‘Seven Sisters’. 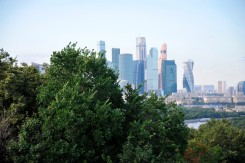 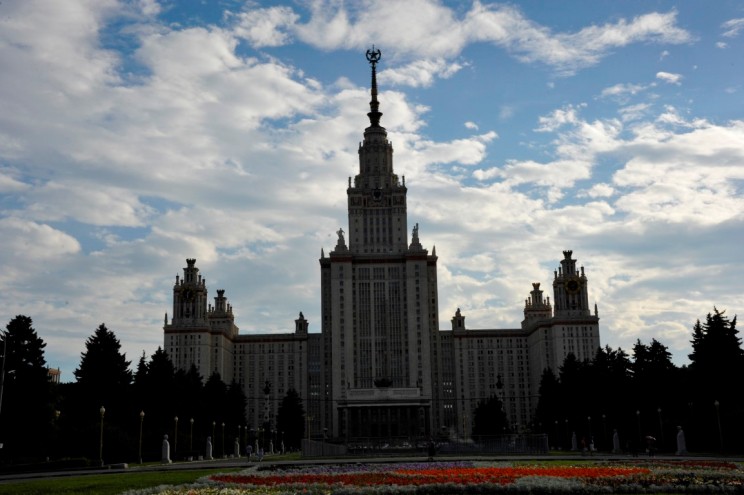 Then we dropped my parents at their hotel and drove back to Vassili and Yelena’s place and saw massive skyscrapers, the Russian Triumph Arch again and also the statue of three warriors of different times, against previous invasion, civil war and WWII (called in Russia as the Great Patriotic War as 20-25 million Russians died during WWII (on a total death toll of 50-80 million dead globally).

Vassili, Yelena and I then walked to another nearby building where we had dinner with their friends. The entire conversation was in Russian and I could only understand a few bits and pieces but luckily Yelena patiently translated things from English to Russian and Russian to English so we could all communicate. Then we walked back to their flat and slept, it wasn’t hard to fall asleep after such a busy day!

In the morning, Vassili went to work. We left Zlata and Timmy with Vassili’s mum and auntie and Yelena and I headed off to Moscow for a day just for us. We started our exploring of Moscow by going to its famous Metro and getting out of many stations to see all art work there one by one. Moscow’s metro is indeed very special. It feels like going from one Museum’s gallery to another! Here are a few shots. Some of the most interesting metro stations were Arbatskaya, Malakovskaya, Belaruskaya but there were many. 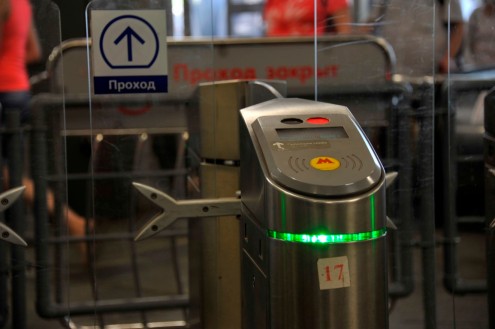 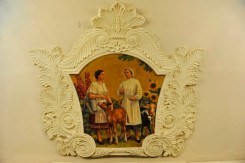 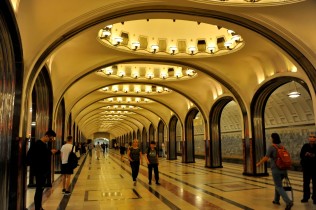 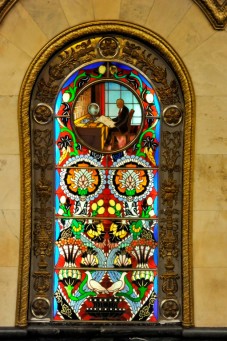 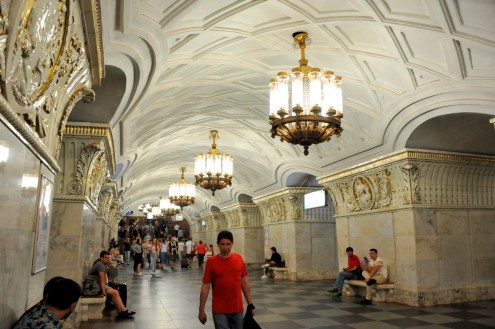 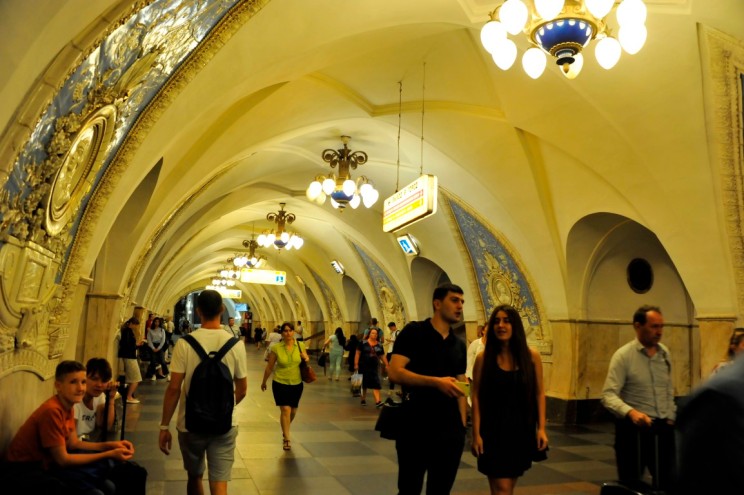 After that, we crossed a bridge and jumped on a boat for a 1-hour ride on the river and saw various bridges, including the second highest building of the ‘Seven Sisters’, the Hotel Ukraina also known now as the Radisson Royal Hotel, 198 meters high, which opened in 1957 and was the tallest hotel in the world until 1976. 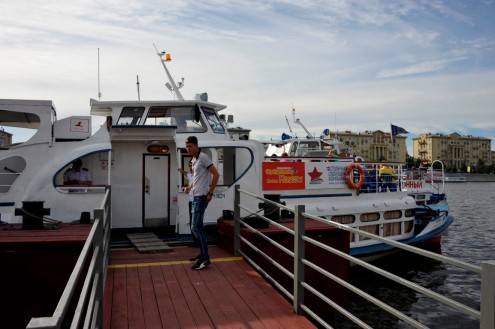 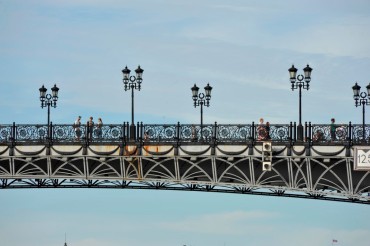 Then we walked into a park, had a roller-coaster ride in Utah through virtual reality, ate some corn, took some photos experimenting the instant-printing booth, saw people playing ping-pong, and chilling out on cool benches on the grass, saw a photo exhibition about Dubai then walked back on the bridge and then into the tube and then on the mini-van system. 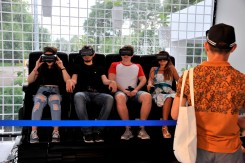 Then we walked back to where Yelena lives where we had dinner with Vassili, mum and auntie and Timmy and Zlata and dodo!

Next day, off to St Petersburg!