We checked out at noon, took the sky train and then a bus to the airport. Our flight for Denpasar was in the afternoon. We arrived in Denpasar on Bali around 6pm. We went directly to the domestic terminal to purchase tickets to Labuanbajo on Flores but the counters were closed.

We took a taxi to Kuta, the city the closest to Denpasar airport to sleep there for the night. Kuta is reputed for being ugly, and we definitely didn’t like it. It was a bunch of crowded streets, full of concrete buildings holding western brands and developed western restaurants and full of western tourists. Nothing of Indonesia, nothing Indonesian and authentic there. We walked a bit and found a cheap hostel, checked in, went for diner, and slept there.

We woke up early and were back at the airport at 7am at the counter of Sky Aviation. We bought tickets for the flight of 10am going to Labuan Bajo. The ticket price was only 88 dollars! Not too bad.

Here is a map of Indonesia.

Indonesia has 238 million people, making it the 4th biggest country in term of population. In size, it is the 16th biggest country. I found this very cool website where you can compare the size of country one against another: http://mapfight.appspot.com/

Here is the map fight of Europe versus Indonesia.

Here is a closest map of the region, to show you the area we flew over. From Denpasar, we flow over Lombok, then Sumbawa, then Komodo, Rinca and arrived on Flores in Labuanbajo.

Here was our plane, with about 48 seats inside, rows of 2 people on each side.

The plane was half-full which was awesome as the landscape on both sides was gorgeous, so I kept moving from one side to another to enjoy both. Here is one island seen from above. 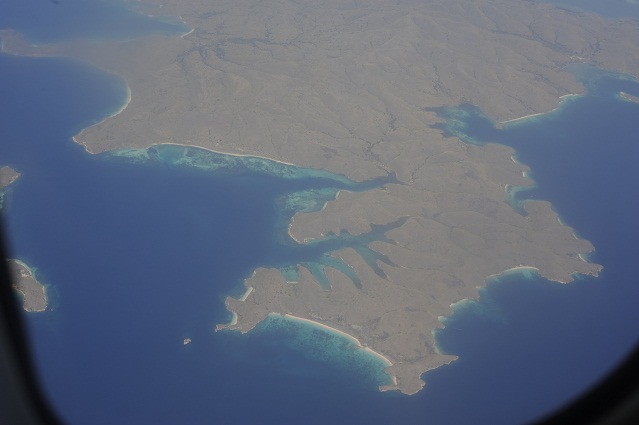 Here is the view from the window 2 minutes before to land.

The airport welcoming icon was the famous Komodo dragon.

Here was the luggage belt where to get our luggage back. Pretty cool. 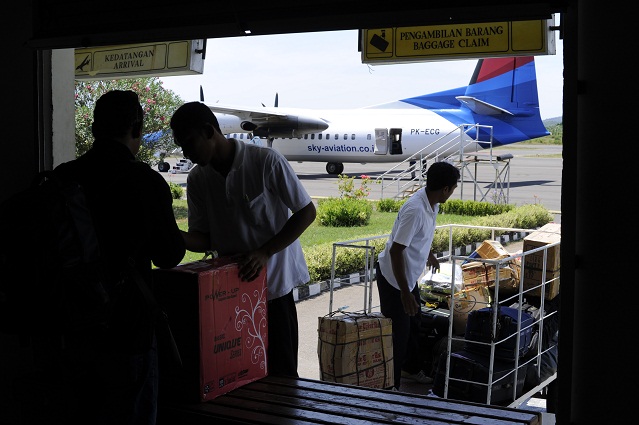 We took a taxi and arrived in Labuan Bajo about 10 minutes later. We were welcomed by Achim at the hotel, checked in and went for some lunch. This is the view of the bay of Labuan Bajo from the restaurant. 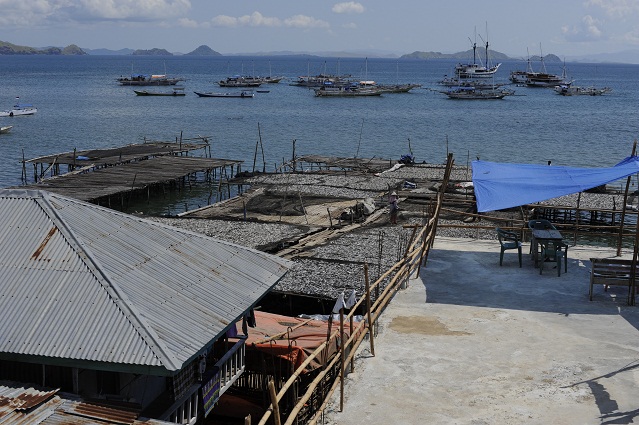 After lunch, we went to withdraw some cash as the next step was to sign up for some diving days on liveaboard boat. We went to Komodo Cruises and discussed the possibilities. I decided to go for 3 days for 410 dollars and 8 dives, while Achim and Michael decided for 7 days for more than a thousand dollars. I wasn’t used to spend so much money in one go, and with 12 dives on my dive book only, going for 3 days was enough for me for a real start into the diving world. After that, we went to a very good Italian restaurant where we had real Italian pizzas for 7 dollars each, while in Asia you can usually eat for 2-3 dollars per meal. A special treat, but so good food. After the great French crepes of Siem Reap, the wonderful French food of Ventiane, and the pizzas of Inle Lake, I was happy to have a delicious food evening on Flores!

We boarded a speedboat in the morning, with James from Australia and a girl from Japan.

It took about 2h to arrive to the gorgeous boat named “Mangguana” on which we were going to spend some time.

On board were already 2 Brasilian guys who work for the Brazilian embassy of Indonesia. Were there also Greg and Sally, the 2 experimented instructors who had dived all over the world more than 2,000 times. So in total we were now 9 people plus a staff crew of 5 Indonesian people, a cook, a navigator, a boat dive preparator, a mechanic and a cleaner. We started with some delicious lunch, and then for a late afternoon dive, and a night dive, and some delicious diner after. Unfortunately, I am not an underwater photographer, so I can’t show you what I saw there, I can only name it. And one thing I enjoyed a lot on the night dive was to hover over a huge turtle for a few minutes with another diver who I had taken for Greg the instructor, and discovered after the dive was one of the Brazilian guy. When diving, it is great to share what you see with someone, because then you can talk about it and comment for ages, and make sure you didn’t dream it!

We woke up just after sunrise. The small boat was already ready with equipment, waiting for us.

We started the day with a briefing, as all dives start. Here is the upper space on the boat where we had all our briefings and meals. 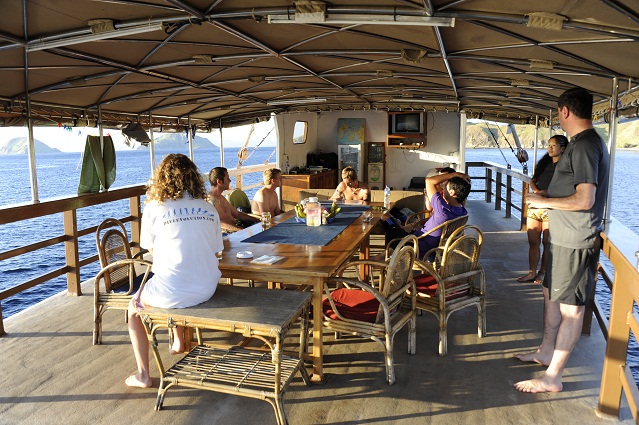 Up we were for the early morning dive. Then breakfast, then another dive at 11am, then lunch and some rest. A turtle came quite close to the boat around 2pm.

Then we had another dive at 3pm at a place called The Cauldron. That dive was a strong current dive, and with Greg and the Japanese girl, we took the Highway! Instead of exiting the current on the left, we went right, we hold hands and let ourselves be drifted away by this strong current. That was pretty cool! I really love currents. After that dive, some tea and rest, watching the sunset.

Then a night dive, where Sally was really good at spotting the tiny little shrimps. I had never imagined that so many kinds of shrimps could exist!

I managed to wake up to see the sunrise. It was gorgeous!

The boat was waiting for us again for the morning dive.

We did another dive at 11am, and then went in the afternoon to Rinca to see the Komodo dragons. Here was the entrance. 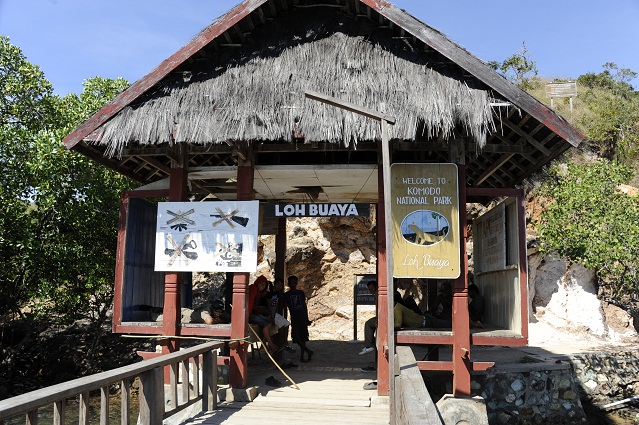 The Komodo dragon is the biggest lizard on earth. It can run at a speed of 18km/h. It kills its prey by biting it. The bite of the Komodo Dragon is poisonous. They have sacs of poison in the lower jaw which is squirted over the teeth when they bite. The wound of the animal they bite gets infected, and a few days after, the prey is dead and the dragon finds it and eats it. Komodo dragons are cannibals actually, as the male can go to the nest later and eat their eggs! Komodo dragons are dangerous and humans getting too close of them or being attacked on the island by some hungry dragons have died in the past! We walked with a guide who had a long wood stick and found 7 Komodo dragons resting under the kitchen. The light was quite harsh, so I didn’t take much pictures at that time. We went for a 2-hour walk around the park. We saw a water buffalo. 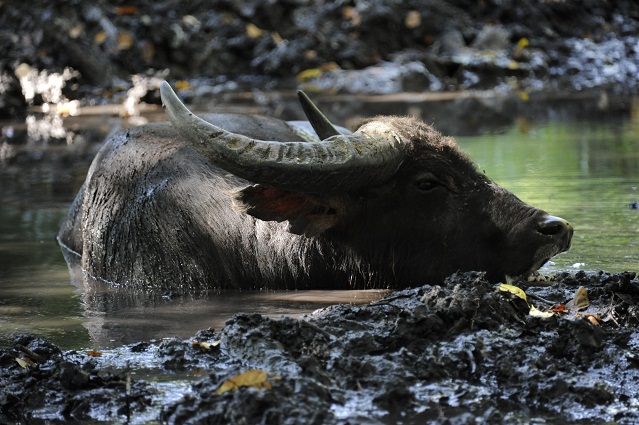 The area inside was a bit hilly, with lots of palm trees.

When we came back to see the Komodo dragons again, the light was better and they were a bit less sleepy also. Here are some.

They have a forked tong, pretty impressive.

After that visit, we went back to the boat. It was time for me to leave and go explore a bit the island of Flores while Achim and Michael were staying for 4 more days to enjoy more dives.

James put some of his photos of what he saw during the dives we did on internet. He is a fantastic under-water photographer, he is being doing that for 12 years, and is really really good at it. Check this link out:

On the way back, the sunset was gorgeous! 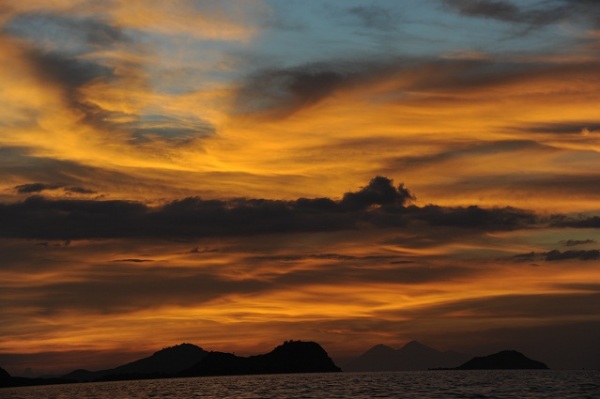 Here I was, back in Labuan Bajo. It was the first time I was on my own again since 3 months! Since Neringa had joined me travelling end of January, I had then travelled a few days with a German guy Robert, then with my dad, then with Michael, then with Aude, then with Michael and Achim. But in reality you are never alone, and at the dive shop I met Cédric and Lucie who were going on the liveaboard the next morning. They were French, living in Martinique since 4 years, and their description of their lifestyle made me dream! They were also travelling for a bit, but mostly to islands. They had been to Mayotte, La Réunion, Maurice, and were now checking some Indonesian Islands, basically going around to see if Martinique was great or if another island would be even better to live on! Smart trip! 🙂