It was Sunday. We needed a new tyre, so that we could keep the spare one in the car in case we broke down again while driving around Karijini National Park. The first wheels shop was closed. The second one didn’t have our tyre and said he could order one, but the tyre would only arrive on Tuesday afternoon…Beeeee…

We tried to find the third shop but couldn’t find it at first. We stopped at the Hamersley Iron Mine to ask, and waited a bit until a truck came out, and we asked the driver who drove in the right direction to show us the way. We got to that third shop, and a really handy guy helped us out. He was not supposed to be there that day as it was Sunday, but they had had to do some extra-work. He looked for us for a wheel, found one for our Wicked Camper, luckily. The girl taking care of orders wasn’t ther e and could not process a card payment and make an invoice, so we paid cash and had to come the next day to do a proper invoice we could charge Wicked Campers to pay as we had taken the insurance covering as many things as possible. All this tyre thing took us the entire morning.

Happy with a new tyre, and the spare tyre back below the car, we finally left Tom Price to enter Karijini National Park.

Near Tom Price was Mount Nameless.

Here is a map of this park. 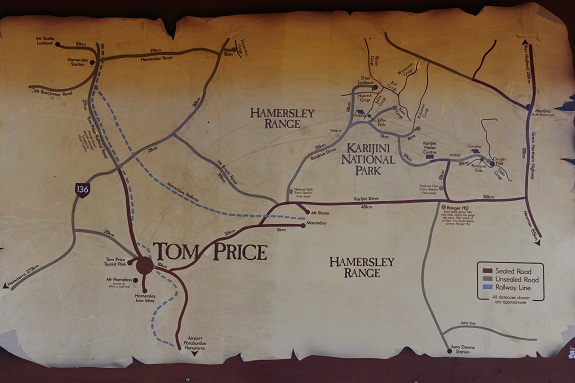 We drove North East to Oxer Lookout. On the way to there was this beautiful landscape with the Hamersley range in the background.

We had to stop before to cross some rails as a very long train full of iron ore or something was passing. It felt like being in an American movie of the Wild West, and I was wondering where the cowboys supposed to attack the train were!

Driving further east, we saw Mount Bruce on our right.

Here is the road we took left to go to Oxer Lookout. 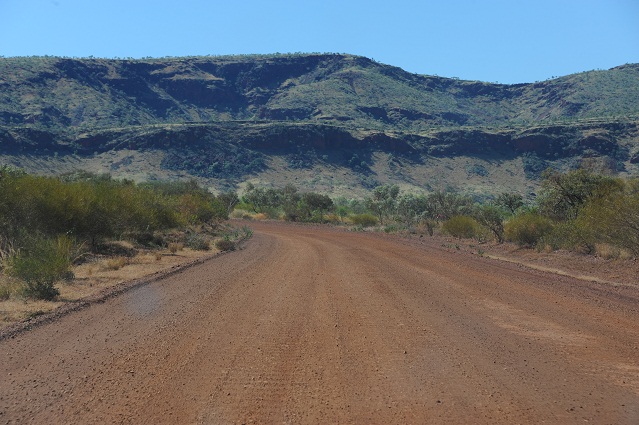 We arrived at the Oxer Lookout and walked to the view point and had this fantastic view over the gorges from there.

At the bottom was a river you could see a bit. It was hard photos to take, as there was this huge contrast between the shining top and the bottom in darkness.

We took a little walkpath to get down to Weano Gorge. There was an interesting little lizard on our way, his legs adapted to the water.

The boys went inside this gorge. The first part of the walk was in the freezing water, just above the hips, and with my cold, I didn’t want to make it worse. Bloody cold, preventing me from doing so many things during that trip.

Instead, I went for a walk in the opposite direction, and the landscape was gorgeous too.

The rocks were beautiful slightly reflecting in a little river below it.

The surroundings were gorgeous. I am starting to run out of words to describe the beauty of Australia! Everything was so beautiful, astonishing, stunning, gorgeous, that I can’t help saying it in every article, and at the same time how would you express that in 20 ways. My English vocabulary gets a bit limited there!

I saw this little bird on my way back. 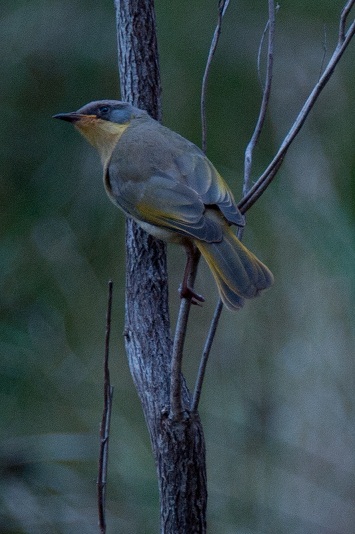 We walked back to the car. Here was some of the surrounding before to get to the parking.

A last picture of the gorges, at twilight.

We missed the sunset that evening, but the colours after-sunset were nice too.

We went to sleep at an eco-lodge, the only one nearby, a place where they liked frogs. As there was a note about that in the toilets, I lifted the cap of the toilets, and here were 3 little frogs below it!

Tomorrow, let’s see a bit of the east of Karijini!