I woke up early and saw the beautiful colours of dawn.

We drove quickly to Uluru. Here it is when in shade.

And just before sunrise.

There were a lot of people at the Sunrise spot. 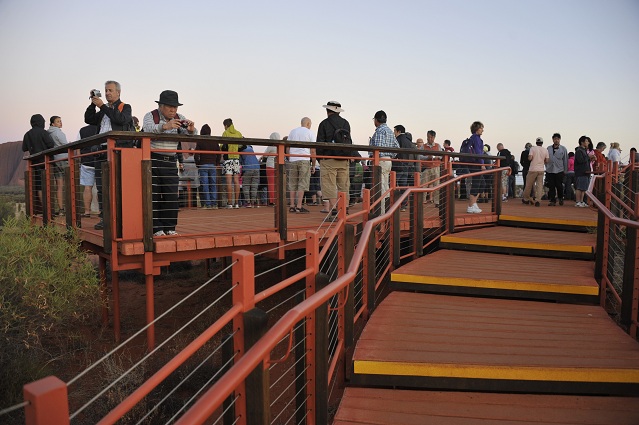 Uluru in the first rays of light.

Zoom in on a detail of one of Uluru’s rock scar. 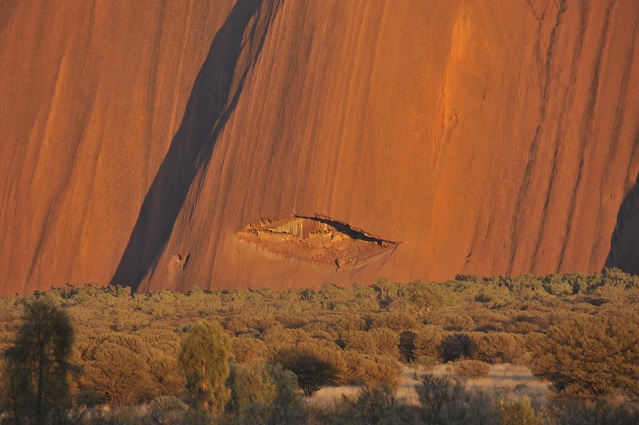 Kata Tjuta on its left.

Long shadows at this hour. 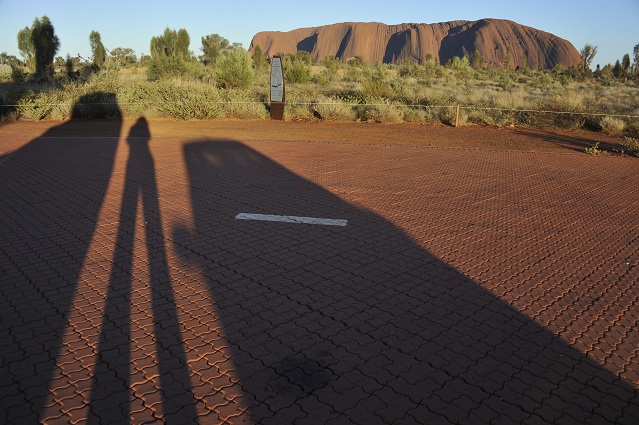 Then we drove to get close to Uluru to do some walks around it.

View when at the parking. Uluru has 1,000 faces. This is one of them. It seems to be missing a few teeth. 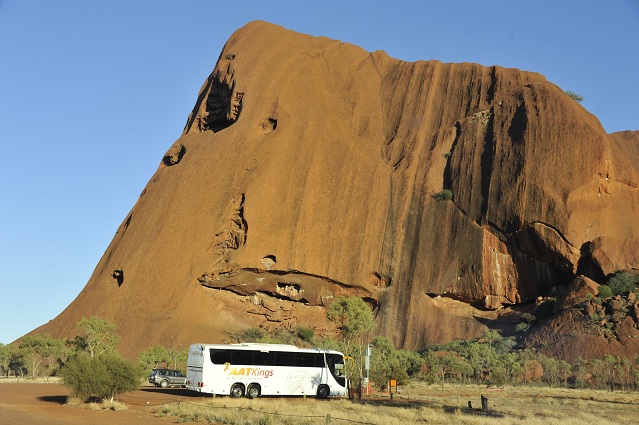 Here is a map of all the tracks available to get close to Uluru and of the 10km base walk offering a complete tour around it.

First we walked on the Kuniya track.

When we hear about Uluru, the photo that comes in mind is the Sunset point picture. But we don’t think of Uluru thousand faces like this funny one on the left with this cheeky Pacman smile here and the one above looking a bit like a Stormtrooper face from Star Wars.

Little pool right next to it seen from the platform at the end of this short track. 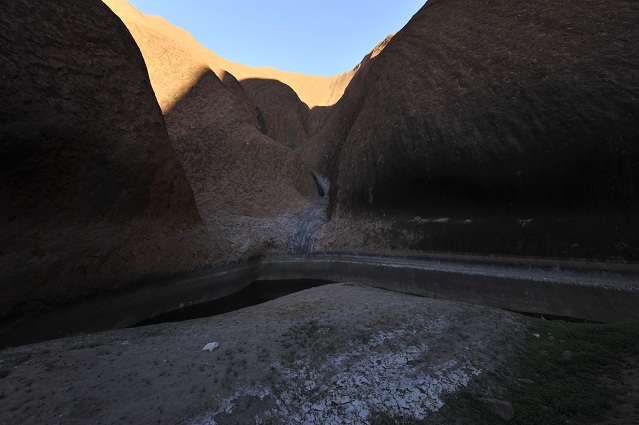 Natural heart shape carved in the rock, seen from the platform.

Tree scratching the nose of the rock 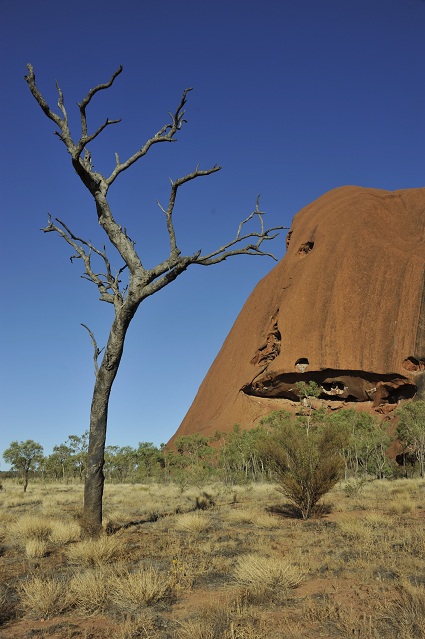 Driving away to the Cultural Centre. Rainbow Serpent from the Dreamtime.

The climb is at the top of this rock. 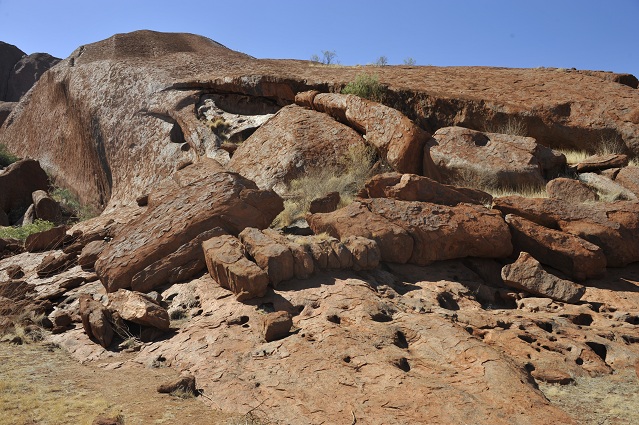 Zooming in. It looks steep and impressive.

This was the traditional route taken by ancestral Mala men. Because of this, Anangu people ask the tourists not to climb Uluru. The climb remains open however as Anangu people prefer that tourists make their own choice and decide not to climb by themselves rather than being imposed not to climb.  I found an interesting text and short video on this website encouraging not to climb. http://www.parksaustralia.gov.au/uluru/plan/we-dont-climb.html

I also found a very interesting text on a blog strongly defending the opposite position. The comments are absolutely worth reading too if you are willing to think more of this question. http://www.outback-australia-travel-secrets.com/dont-ban-the-uluru-climb.html

To climb or not to climb? That is the question at Uluru.

Back to our walk around on the “Mala walk”, I found lots of amazing shadow shapes in the rock convincing me Uluru has really thousands of faces. This is one of them I particularly like, which makes me think of a fairy with a really high hat. 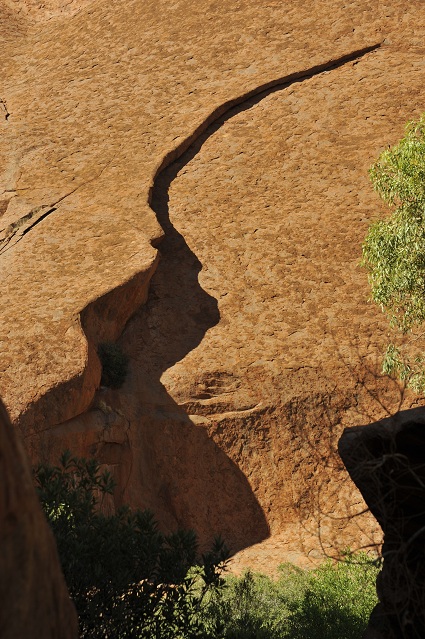 Here there seems to be a face in the rock. 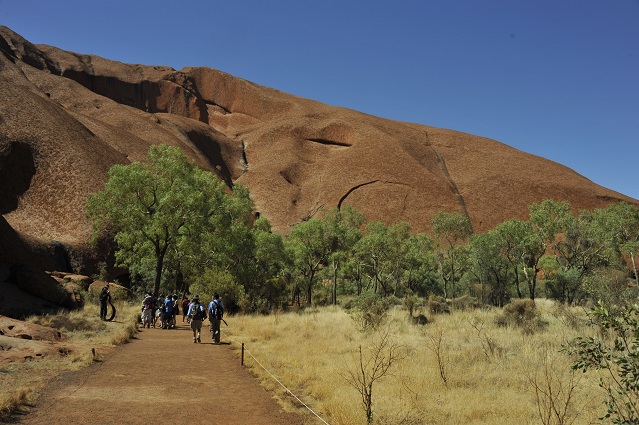 Close-up on the face 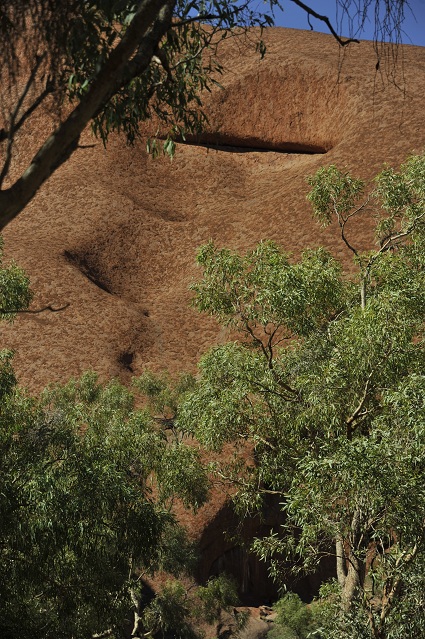 End of the walk, in the shade in the morning, looking up. 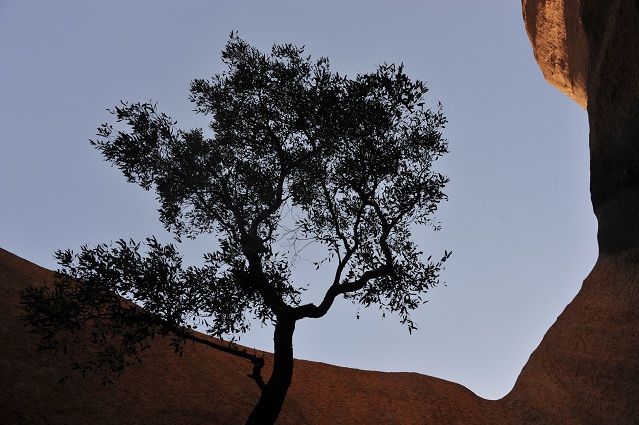 Large view of this section of Uluru

Back on the road. Time to go to the airport!

I sat on the right in the plane and I was really happy that it was the right side to see Kata Tjuta and Uluru!
Kata Tjuta from the plane. 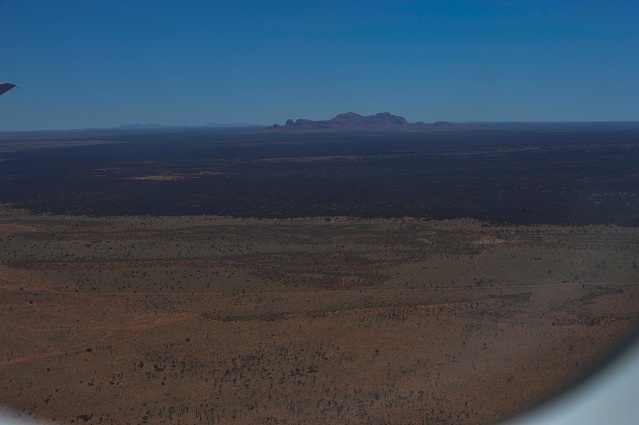 Uluru. It does stand out surrounded like this by a flat country. 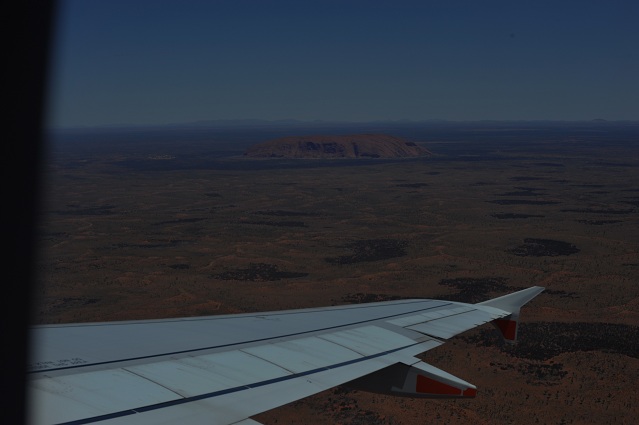 It seems to have a triangular / heart shape when seen from above. 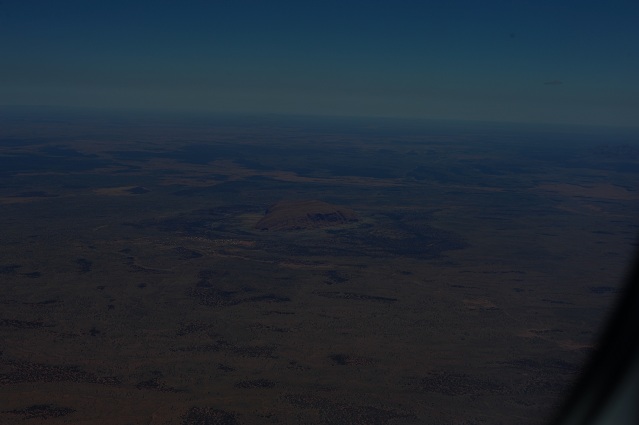 The flight was as awsome as on the way there, flying above an incredibly dry landscape which looked so much like another uninhabited planet which didn’t seem to be the Earth. On the way back, there was a moment when we flew above an immense white lake for about 15 minutes which seemed to have no end. Here was its beginning.

It was really strange to see Sydney again, such a huge city, so many buildings and land transformation compared to Australia’s centre.

It actually did rain the entire afternoon and the next day too that I spent walking around the city. What a crazy contrast!