Ready for a 2-week road trip down south from Brisbane to Canberra yeah! Roughly 2,400 km return trip.
We had 3 choices. We would have loved to take the inland road going via Dubbo and even going further inland in the Outback but..we were in December. In December in Australia, it’s HOOOOT!!! The temperatures on that road was between 36 to 40 degrees, while the temperature on the Pacific Highway near the ocean was between 29 and 33 degrees.

In the morning we packed the car, camping stuff, clothes for 2 weeks to not have to do any laundry, surfboards, wetsuits, esky. We went to Coles to buy food for the first few days. Then we drove to my Australian cousin Dalisay and had lunch with Dalisay, Marty, Finn and Max. And we hit the road around 2.30pm. Going on a road trip is always nice. There is all this unknown. 14 days to go down and back. Freedom. It’s always an exhilarating feeling!

We decided that our first stop would be Lismore as it was 2h30 south of Brisbane. We would have preferred to stay near the ocean, but at the time we were afraid that all campgrounds would be full. In reality, we realised in the next days that they do get full but only AFTER Christmas, not before!

Here was our first day itinerary, from Brisbane to Lismore.

One of the beautiful things of the road trip is all those  crossroads where you are free to choose to take one road or the other. M1 to Gold Coast? Or M2 in the direction of Toowoomba? M1..M2…M1…M2??? Alright, M2. Just because of that fear of all campgrounds being full!

Mt Warning on our right. 1,156m high, and the highest mount in the region. 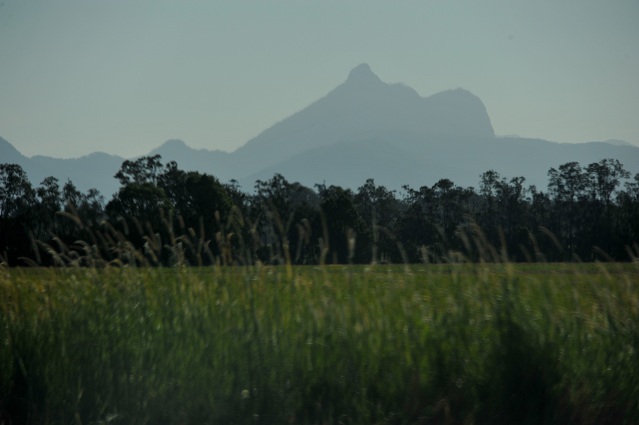 In 16th May 1770, James Cook saw it from his boat and named it Mount Warning, as this mount gets the first rays of the sun each morning and was warning the explorers of the proximity of the land when they were arriving from the sea. It is the remainings of a volcano which erupted about 23 million years ago. It is called Wollumbin by the Bundjalung Aboriginal people. It is a a place of cultural and traditional significance and is the site of particular ceremonies and initiation rites. Interesting enough, traditional restrictions forbid the uninitiated from climbing the mountain but the restrictions are not as known by people as the restrictions of climbing Uluru for example and there is not as much controversy about it. Over 60,000 people a year make the 8.8 km, five-hour round-trip trek to the top from Breakfast Creek. As a comparison, currently roughly 80,000 of about 400,000 visitors per year climb Uluru. (Although I don’t seem to be able to find reliable real numbers about Uluru visitors / Uluru climbers) so this is an approximation.

Tunnel. So that animals can cross the road too, above it, to go from one side to another without getting killed by cars. There are lots of these animal bridges in Australia.

Quick stop for free coffee and biscuits at one of the Lions Club Driver Reviver.

Then one hour non-stop to Lismore Tourist Caravan Park, an uninteresting boring caravan park we chose because night was falling and we couldn’t bother driving further around. So uninteresting I didn’t take any picture of it! To choose campgrounds during this trip, we used THE Australian Campground guide. That book proved to be really handy, even if it was an edition of 5 years before.

We slept at spot 232 of this guide that evening, but I would not recommend it as it was noisy with the traffic of the road nearby, even if there were few cars passing by luckily. There are probably 100 more interesting campgrounds around there. Here is a map from the guide with where we stayed that night and the next night.

The interesting thing that evening was all the bats flying out for the night.
The number of bats was really impressive.

Tomorrow, further down South, in the direction of Coffs Harbour and beyond!