In the morning, I woke up in Cartagena and went to the reception around 8am to confirm that I wanted to book a pick-up in a mini van to go to Santa Marta for the morning. I had asked the day before to book but she told me “no, no, manana, manana!”. Ok then. So here I was, and Astrid the receptionist called and they would pick me up at 9.40am, price was 42,000 COP for the journey. That left me 1h30 to go buy 2 shirts in a shop nearby in forecast of the Ciudad Perdida as I only had 3 shirts and wanted to do the 4 day trek. I got my 2 shirts and some croissant from this place nearby, yummy. 🙂

Then the mini-van picked me up. It took about 5 hours to get to Santa Marta. Sitting next to me was a couple of French people in their fifties who had travelled already for 4 months and half. We chatted about…travelling of course! They told me that they went to Galapagos by themselves, booking their own flight to the main island and from there taking boat trips here and there. It was interesting to hear about this way of going to Galapagos as most people just go on a tour. They told me also how Quito can be ok but the tramway can get very crowded and that´s where pickpockets have the most fun. Was great to chat with them during that drive.

On the way, we saw some of the villages in which probably no tourist ever stops.

We got to Santa Marta but I didn´t manage to explain to the driver in my frenchitalianospanenglish that I would like him to drop me at Dropbear hostel so somehow he dropped people in the centre, then drove to Taganga to drop other people. At least I saw a bit of Taganga which looked quite nice. 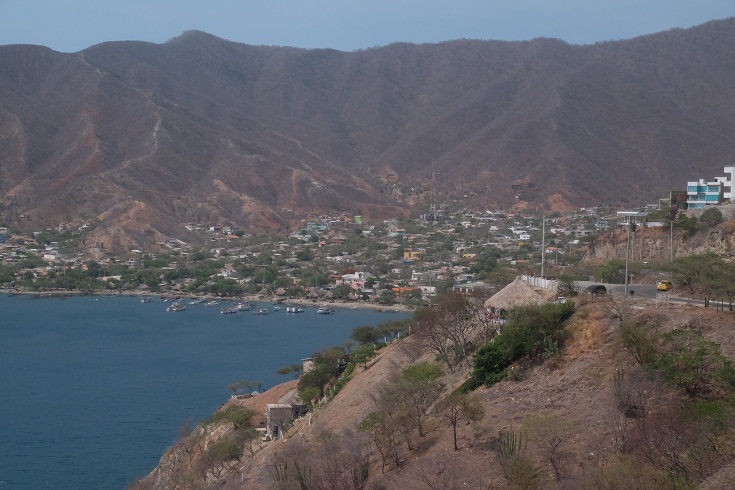 Then I was alone in the mini van and he drove me to Dropbear. I don´t think mini-vans actually drop people at their hotel exactly, so I gave him a tip to thank him for that and he suddenly cheered up much more and gave me a little mango to thank me, now that was a cool thing. 🙂

First thing when you get to dropbear is a test to assess how dumb you are understanding a gate opening.

I have to say, I failed that test. I looked at that gate for 10 minutes very frustrated and not understanding how to open it. Finally someone from the hostel came to rescue me and open it. Dead simple of course.

At the reception, all guys hanging out there were into their phone, not talking. I couldn´t help remember how 10 years ago smartphones didn´t exist and when people would hang out there, they would be in the instant, talking to each other. On one end, the smartphone has enabled the possibility to be connected with people far away at all times, making this connection much better but on the other end, it did decrease the number of conversations that used to take place between travellers when sitting in the same area together. Just interesting to see how things evolve! And hey, with the time I spend on the computer blogging, I am nowadays probably the one the most out using a bit too much that technology!!!!

Rest of the afternoon, I booked Ciudad Perdida to go on the 4-day trek the next day and otherwise went in the pool, washed some clothes, chilled out in the hammocks, went to the nearby supermarket to buy food for dinner and also something called Tiamina which is a medication you take the evening before the jungle and then morning and evening during the trek which is supposed to prevent mosquitoes from bitting you but somehow I can tell you already it didn´t work as I still got lots of bites during the trek!

And then met people at the hostel, Michaela, an American girl from California who spontaneously had decided to go travel 3-4 weeks to Colombia alone. She was also going to Ciudad Perdida the next day, and sleeping in the bunker bed just above me. Packed my bag for the trek while chatting to her.

Then me and had dinner with three other travellers, Sebastian a German living in Switzerland and travelling in Dublin then here then going to Germany soon for a festival then South-East Asia, going all over the world, and his friend Martina who had just spent 4 months travelling through Central America, and Michael a German guy who was mostly hiking and had spent 4 months in Patagonia. Now that was something I was super interested in so I spent the evening with him asking him about every single detail of his journey there, all the hikes he had done. It made me travel there already and dream about it. Came 1am and we had not even gone through all his journey there. He had travelled 10 months already and was travelling for 10 more months! So cool. The hostel was great, here was the view from our table of the pool and in the background the bar. The atmosphere was relaxed and partying, good vibes here.