With Martina, Sebastian and Michaela we got picked up around 8.45am at the hostel by German, a translator working with Turcol. 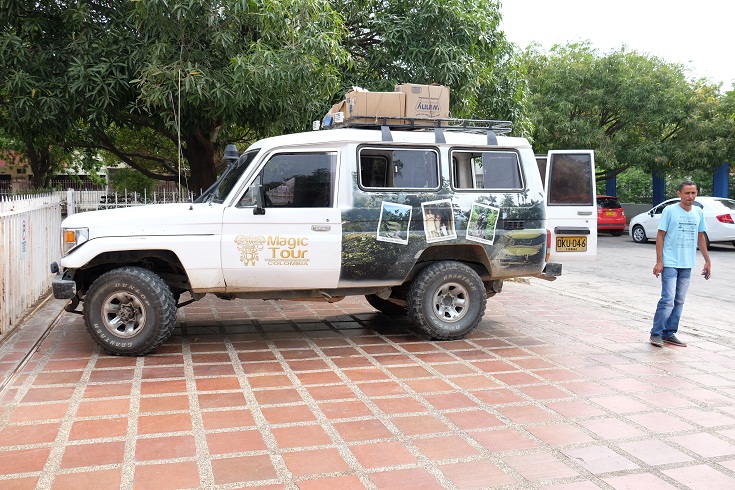 We got dropped at the Turcol agency where we met Larissa, a girl from the French part of Switzerland who came to visit her cousin who had already been living in Bogota for 3 years and then decided to travel around Colombia alone. Now, some people ask me how I can go travelling alone. Well, here we were, Michaela, American girl, travelling alone. Martina, German Swiss travelling alone since 4 months already. Larissa, French Swiss travelling alone, me travelling alone. When you tell people at home that you go alone, they think woo, that´s amazing. But hey, it is actually pretty common! Many girls and many boys go travel alone! They are fine! Because when you travel alone, you meet people constantly, all the time!! 🙂 At Turcol we paid the rest of the 4-day trek as we had only paid a deposit at the hotel and then were given a briefing. Here is a map of what we were about to trek. 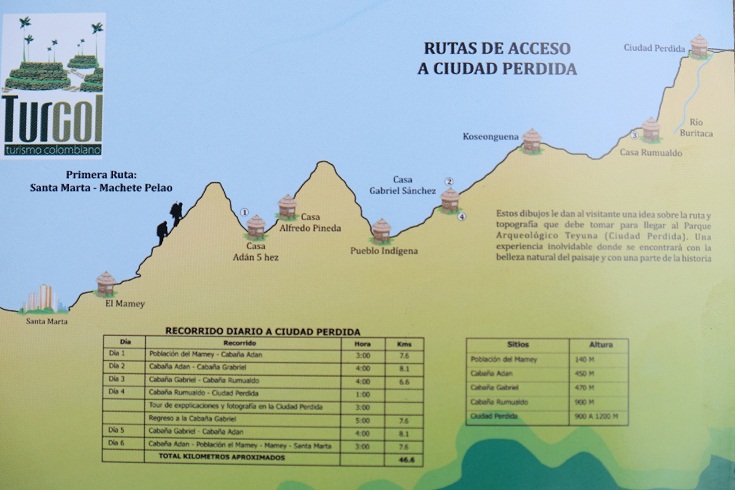 We got into a bigger van with some Lithuanians and a Colombian family of father, mother, and 2 sons in their twenties. On the way, we stopped for lunch. Then we drove for about 2 hours total to a village which is the beginning of the trek. Militaries are hanging around watching nothing bad occurs although it is been a couple of years that things are pretty peaceful around. 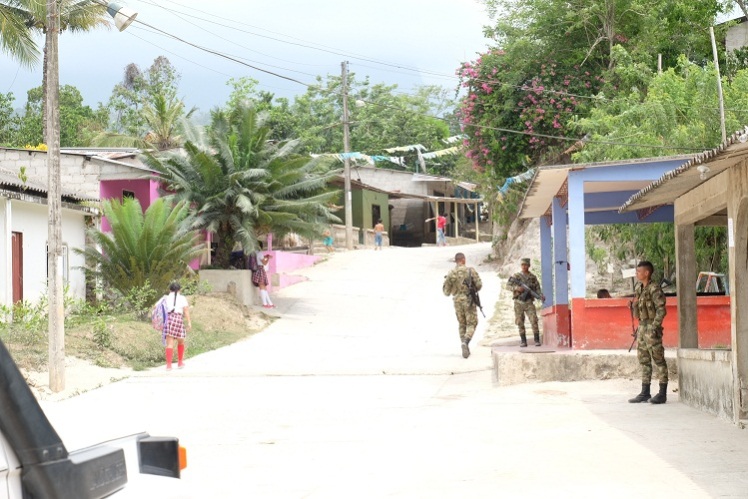 There we had another briefing about who was to walk in which group.

We were not very happy because they confirmed they wanted to split us in 2 different groups, but ultimately it did not matter too much as most of the hike we just walked together and were together in the evening. They were trying to put people in groups so that each guide organises the fruit snacks logistic on the way so everyone is sure to get some fruits. We finally started walking around 1pm. With Larissa, Michaela and the 4 Colombians, our guide was Edwin. Here he is on the picture. Edwin has been a guide for 24 years now. The interesting thing about him is that it his dad who got kidnapped with a bunch of tourists in 2003 on this trek! Since then, there has been no danger, everything is fine now.

And up and down we walked!

The weather there is jungle weather. It means a very high percentage of humidity in the air, who knows, maybe 80-95%? I can´t tell exactly. What is sure is that you walk and you get extremely sticky. Our clothes were completely wet very quickly and sweat due to walking and humidity meant our face was dripping drops constantly too. Yummy. Well, for four days, this is how it was, and we just got used to it! We stopped after an hour and jumped here in the river for a refreshing swim. 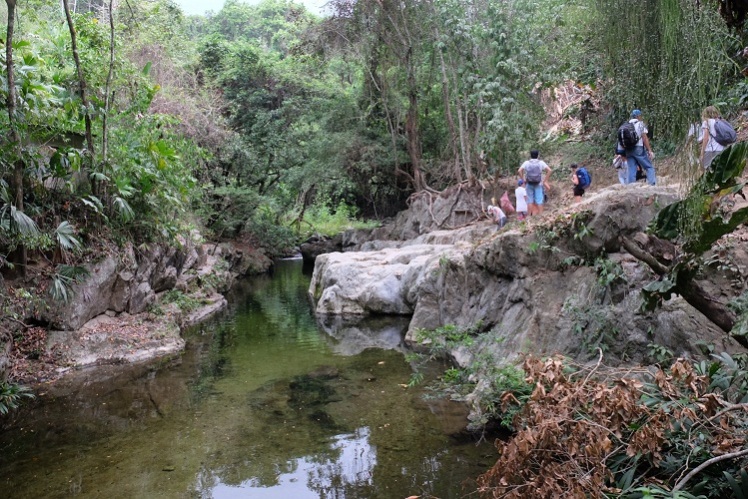 Now, for girls, bring a long towel so you can use it to change into your swimming suit on the spot when there are 50 people around you. That was the thing I forgot and was glad that Michaela had one I could borrow. The swim was really refreshing and then we just got back into our sticky clothes and kept walking. The landscape of the Sierra Nevada around us was really pretty.

Everywhere we looked, it was gorgeous green hills. 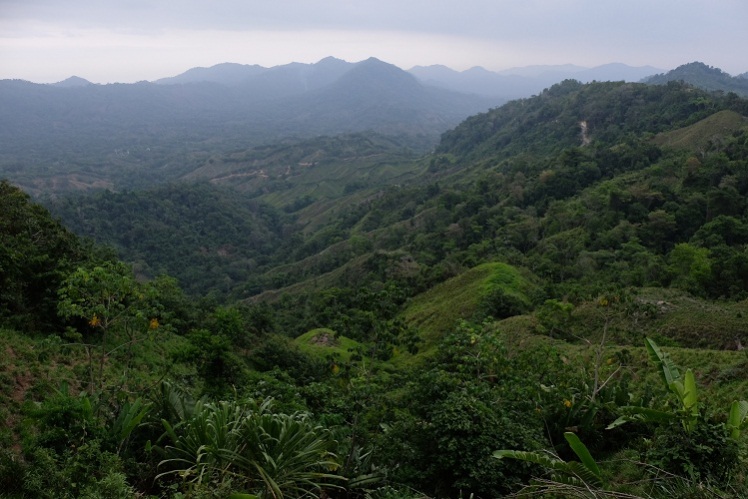 We stopped for a watermelon snack around 3.30pm. It was really refreshing after this intense walking up and down in a sticky humid hot weather. 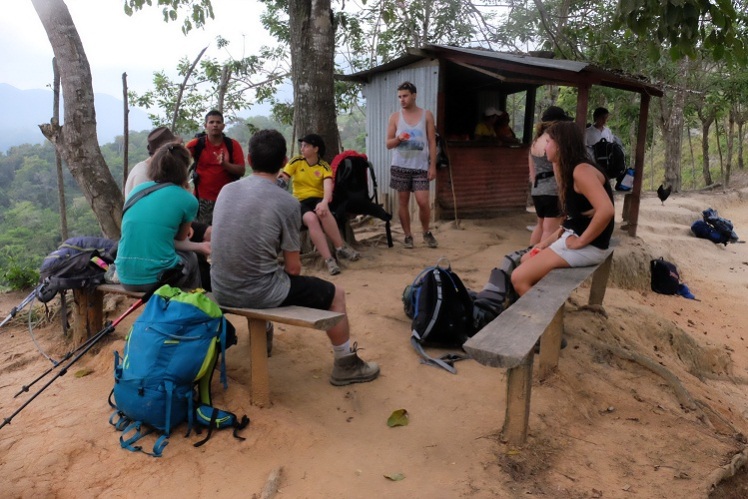 There was this chicken with her four tiny little chicks. That was cute.

We continued walking and that landscape was so awesome, I could not stop taking photos! That made me the slowest walking at the back, as often in hikes, but I really didn´t mind. 🙂 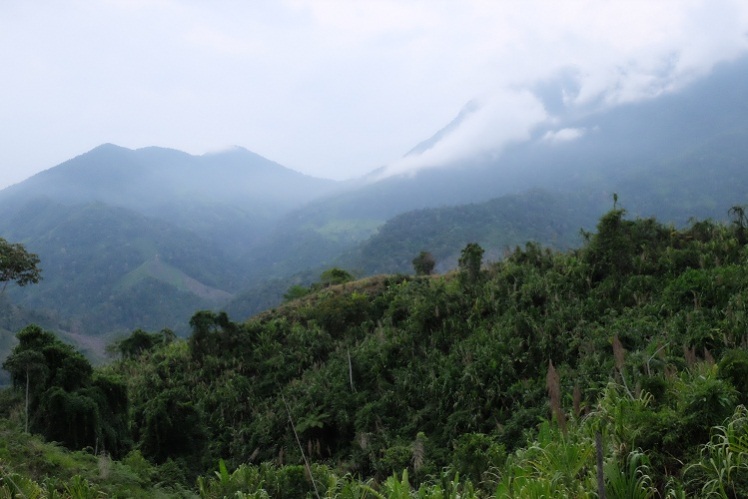 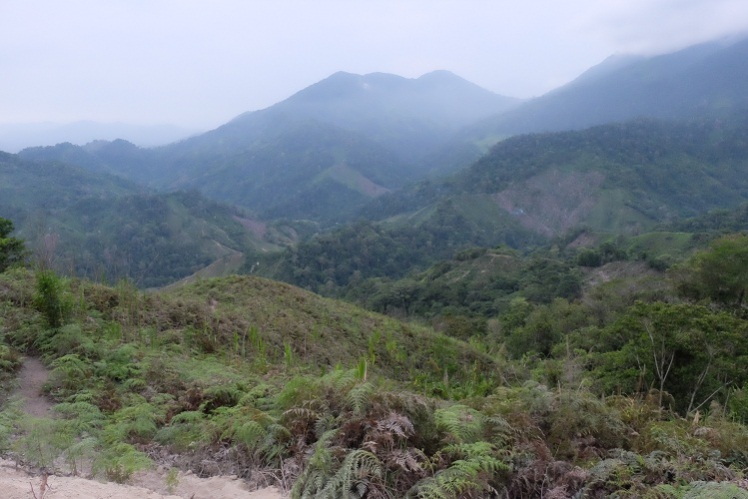 The guides come with mules who carry the food for us. Those mules are very handy and adapted to this kind of route.

And we walked and walked. Now, please do yourself a favour if you decide to do this trek. Come with proper hiking boots. Your feet will thank you! Trail shoes are ok too, but it is very steep and a long hike, with the rain it can get muddy. Having proper hiking boots mean you get strong support for your ankles and a lower risk of falling and injuring yourself. You need less effort to walk too. Less blisters probably too. Definitely avoid the sandals if you can otherwise you will struggle and sometimes walk bare feet like this woman here.

And patting some pig. 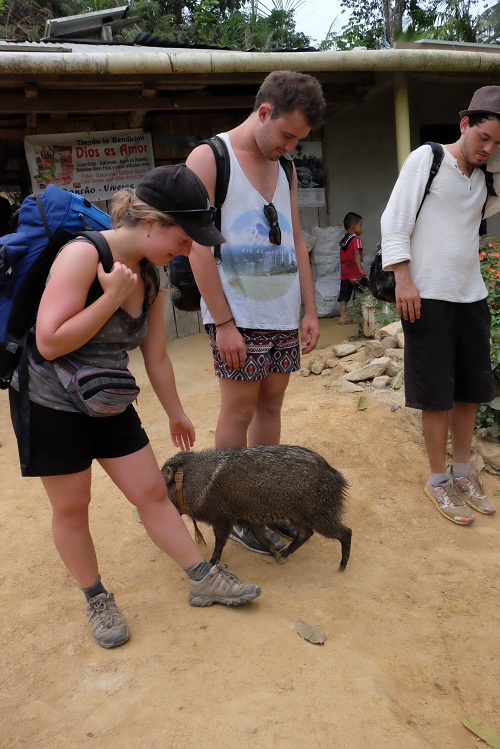 And up and up we go.

Imagine living over there in that remote house on the mountain.

Yep, that one. Crazy hey.

A school for local children. I thought it would be cool if every day some of the 200 hikers doing this trek were popping up in the school for 15-30min to speak English with the kids and talk about the country they come from by showing it on a map on the walls of the classroom. Those kids could be so lucky, they are right to 200 different travellers passing by every day, the world could come to them! 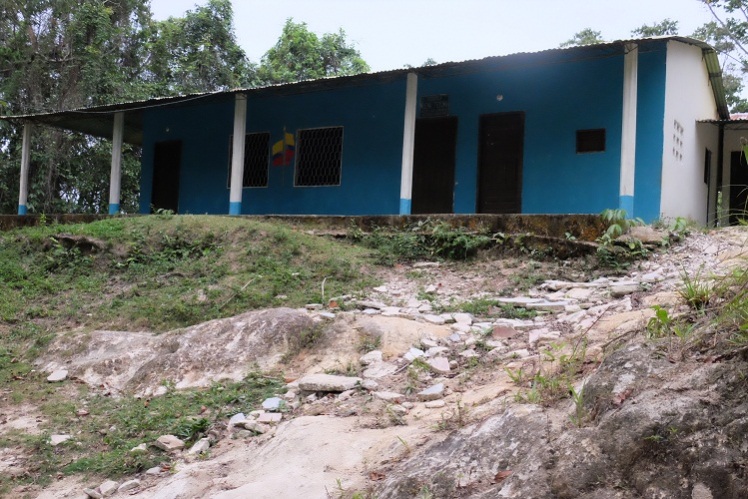 We saw this plant which was intriguing with all its cigarettes going up on the branches. Wonder what the name is. 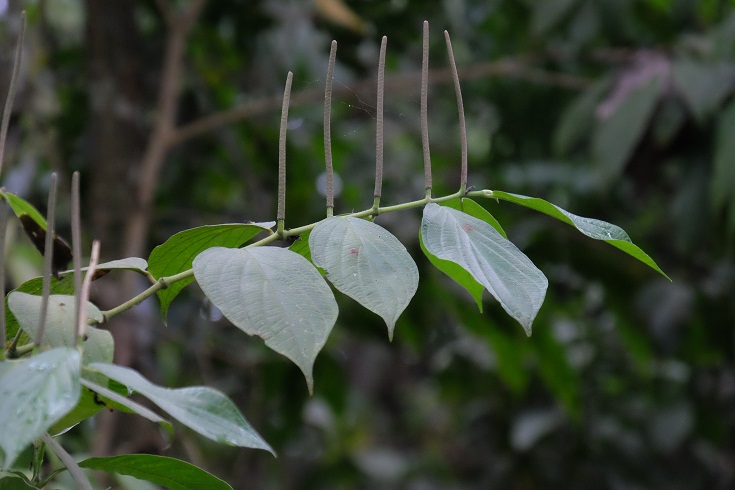 And down we went. On this picture Paul and Emmanuelle,  a French couple living in Lyon. Now, if you have trekking poles, bring them. Very handy. I read recently on a blog of a 60-year old woman travelling the world alone that using trekking poles when you are young will save your knees for more hiking when you are older as each time you put them on the floor, you relieve a bit of pressure on your knees. If you don´t have them, no big deal!

And down again. The red soil was a beautiful contrast with the vegetation of an intense green.

And then we got to the campground which looked like a mini-village. It was 5.20pm when I got there, but I was one of the last ones.

And beautiful yellowish and white one.

And some other big one that I remember seeing before in Australia too.

And here were the beds in which we were to sleep, each protected by a mosquito net. 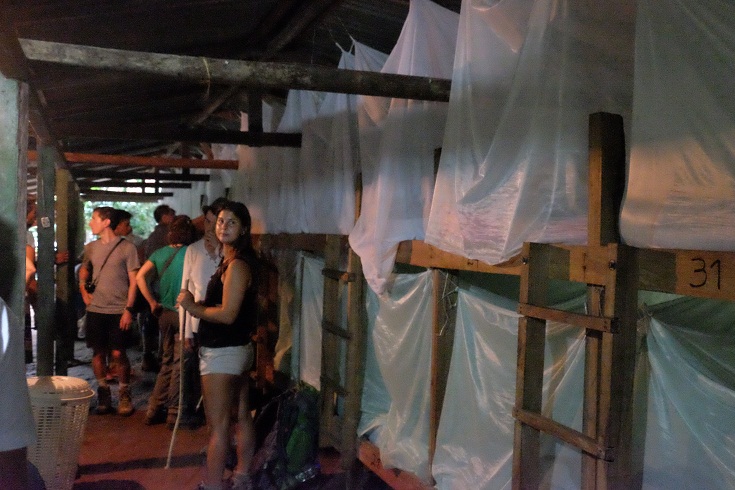 And off we went for a swim.

Now, to swim, you first have to jump from 4 meters high. Yep, come on, don´t think, just do it! Alright, there was also a ladder.

You could also jump from 6 meters high. I tried that and was glad to have my one piece only of swimming suit. Looks old-fashioned but when it comes to jump from high, I don´t have to think twice about the risk of loosing the top of the bikini and can just go ahead! 6 meters is pretty high and if you don´t hit the water properly, it can hurt a bit. Larissa smashed her bum, and me the foot and the right arm. It was red and a bit burning for a few minutes but still worth doing it.

After that we changed into dry clothes and had dinner. Then another map of the Ciudad Perdida trek was shown to us and details of the trek re-explained.

After dinner, we hanged around at the tables.

And I discovered the game “Schweinerei” that Martina had brought, where you throw 2 pigs like you would throw dices and based on how the fall on the table, on their feet, on their back, you win certain points. You can keep going throwing them and winning points but you take the risk of them landing in a way that makes you loose all points so you need to decide when to stop. It was a funny game even if I was pretty bad at it. 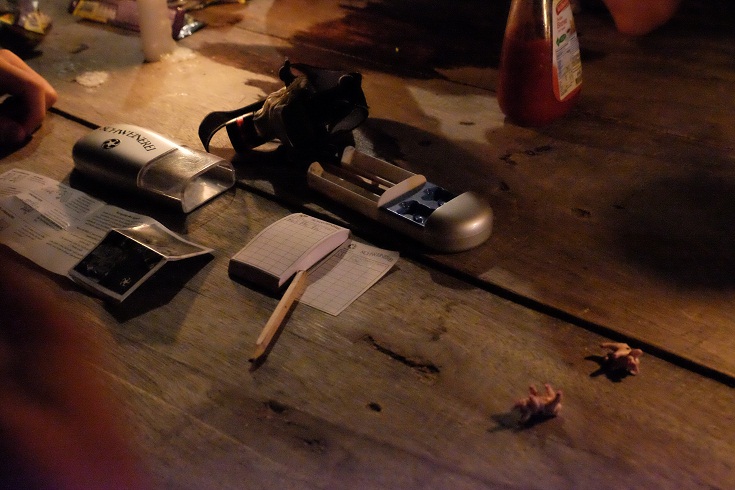 Paul checked on his Garmin watch and told us that we walked 15 kilometers during this first afternoon. Off to bed.