Some activity started around 4.30am, the cooks were at work preparing the breakfast and we could see and smell the firewood as that´s what they cook on. I love that smell so I thought that was cool. We woke up and had breakfast around 6am. Here is the activity around 6.30am, everyone getting ready.

The toilets in the background

And off we were around 6.45am, leaving the campground.

6.55am and already some awesome landscape. And the fresh new t-shirt starting to stick to the body, already! And drops falling slowly from the face. Jungle weather. 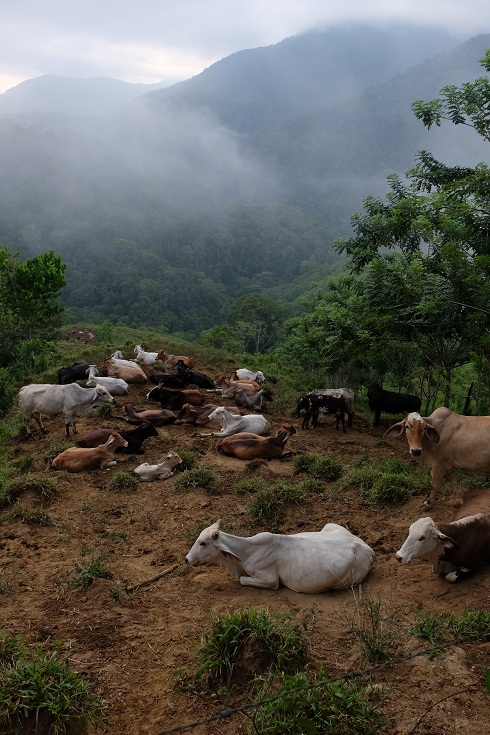 Maybe that caterpillar turns into that butterfly? 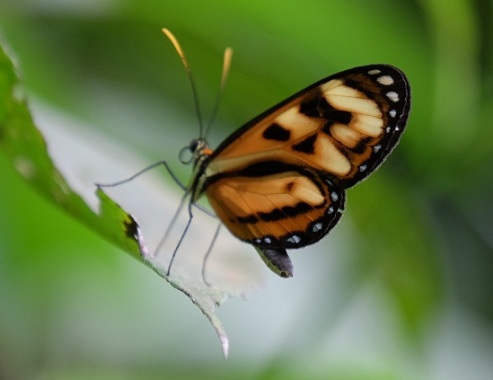 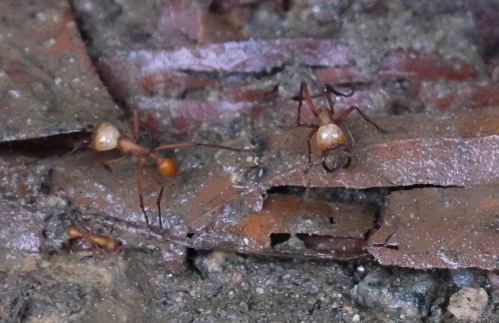 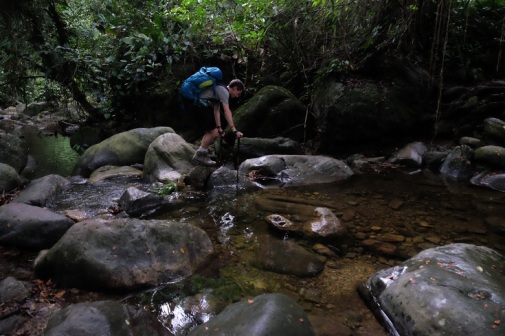 The Sierra Nevada is inhabited by the Kogi tribe mostly. They dress in white like these children here.

The Kogi tribe is a very interesting one, you can read a lot of information about them on the internet, even just the Wikipedia page here has really interesting content.

That leaf attracted our attention by the very regular bites it had in it. We pondered on which insect can eat it in such a meticular manner. 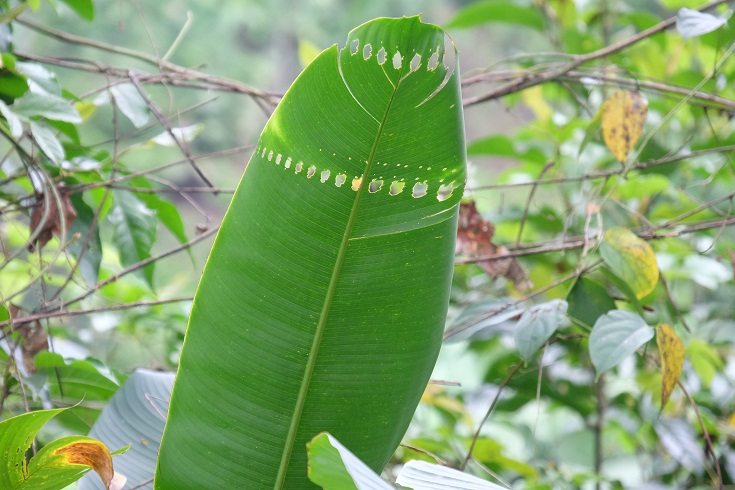 We saw those birds from quite far. They are called “Oropendola” and are black with a beautiful yellow tail more visible when they fly around.

We arrived near Kogi houses.

In their garden they had some coca tree. Here is how it looks. They chew coca leaves to get energy in the traditional way they have done it for generations and for this reason they are allowed to grow coca trees for their personal use. 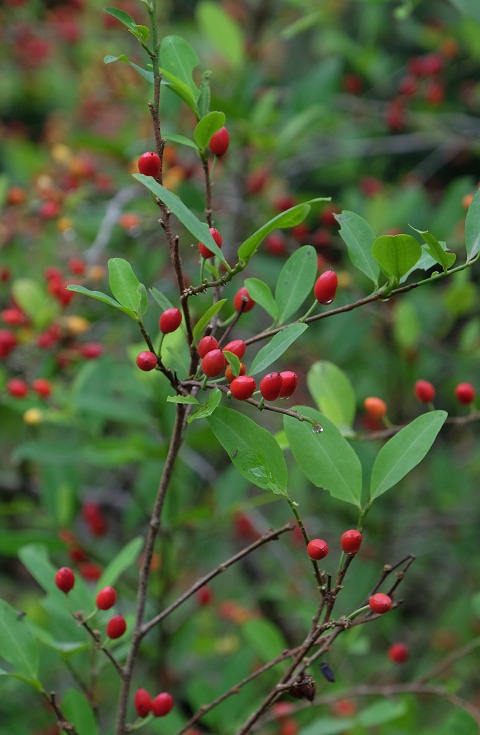 The guide explained to us that the leaves of 50 trees are needed in order to make 1 kilo of cocaine. Once upon the time, the entire area of the Sierra Nevada was planted with coca trees and the main playground of all the cocaine business but the last 15 years the government has fighted this with the help of the tribes and also the help of the United States to completely clear the land from the coca trees. Unfortunately, it was not always done in the best way as one way was to fumigate with a plane all the land to kill the coca trees, but in reality it killed…every single other plant! This has stopped too and the Kogi are slowly recovering from that period and starting to be able to grow again bananas, plantain bananas and other plants.

The kids there were playing football.

Bigger village of the Kogi. 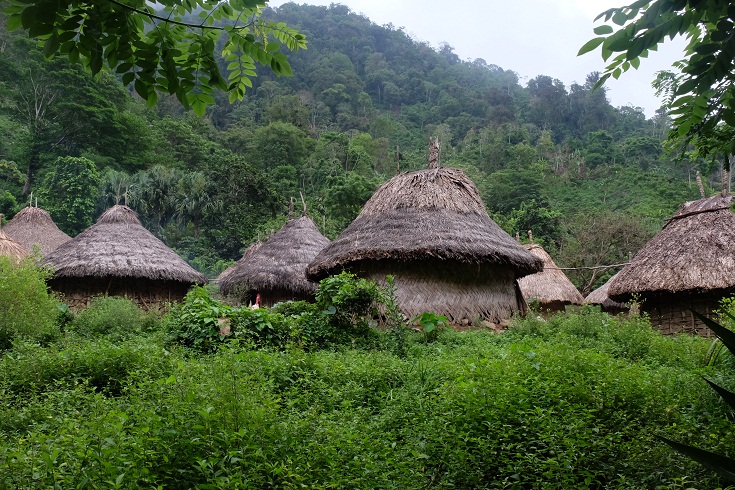 Couldn´t help thinking of the Smurf mushroom villages. So I got out my mascotte the Smurfette who is travelling with me for this trip. Let me introduce you to “Juanitette”, her name comes from a South-American name Juanita mixed with Smurfette. Invented through a long and very very exhausting brainstorming session with Ryan and Clare in Cartagena. So here is Juanitette coming out of a visit to the Kogi house. 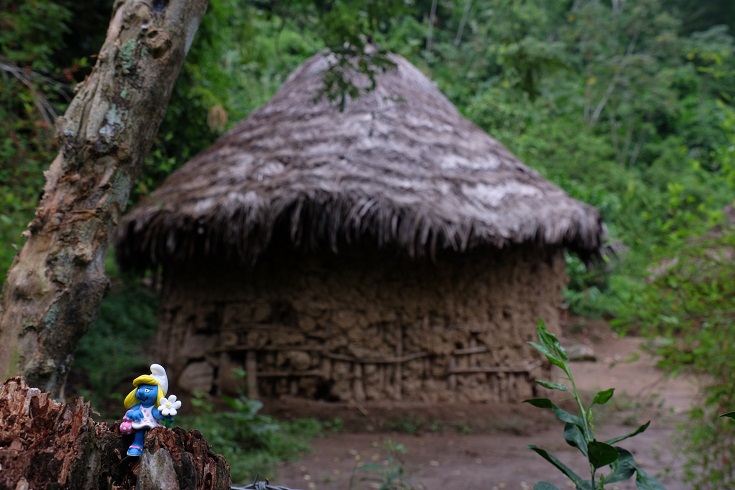 Another swim in the river before lunch. 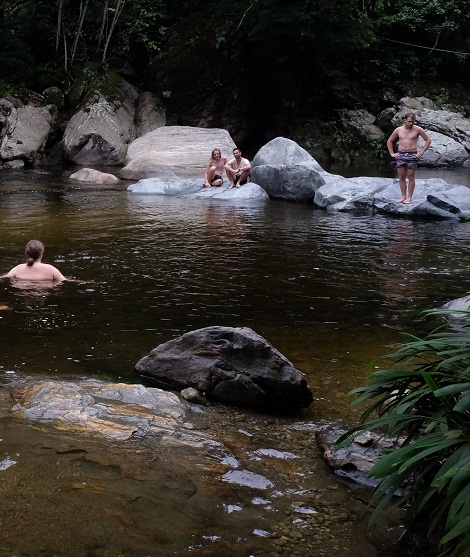 After lunch, it was 12.30pm and we started walking again along the river.

Crossing the river on a bridge. We were all cautious, going three people max on it at a time.

And up and up we went.

William and some Kogi people going in the opposite direction.

While walking, we could see many times little ants carrying small pieces of green leaves. If you disregard the ant, it is actually quirky to see those tiny little leaves moving around like if some invisible force was making them walk. Leaves on legs. 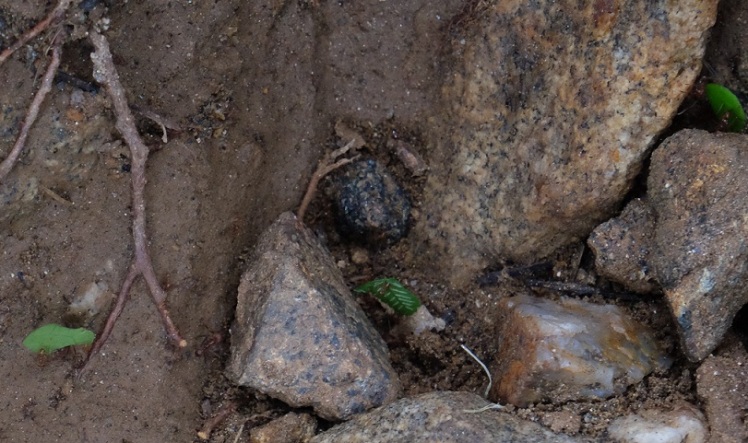 The snack break was very busy. 200 people doing the trek every day, that´s a lot of people crossing each other in some of the break spots like this one.

Is that a turkey? Such a weird animal, doing such a weird sound. Martina said: “This is the ugliest bird I have seen in my life!”

And off we go, through clear land this time, with an awesome view.

And those leaves we constantly saw on the floor, curling on themselves. 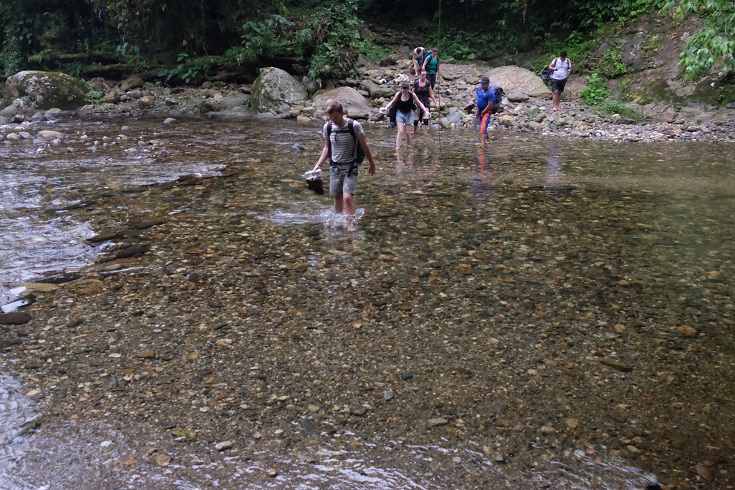 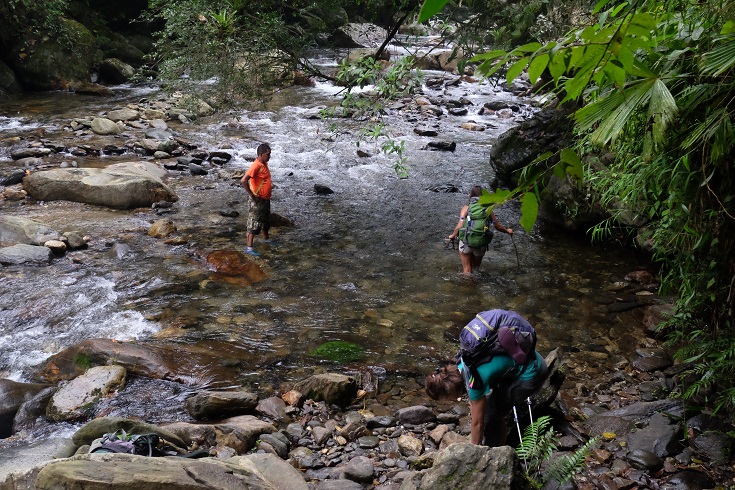 Seen from the other side of the river.

4pm, we made it! Paul´s garmin watch tells us we walked about 23 kilometers today. Welcome to ParaisoTeyuna, 1km away from Lost City, 800 meters of altitude.

Time for a shower in the river with organic environmental friendly soaps. 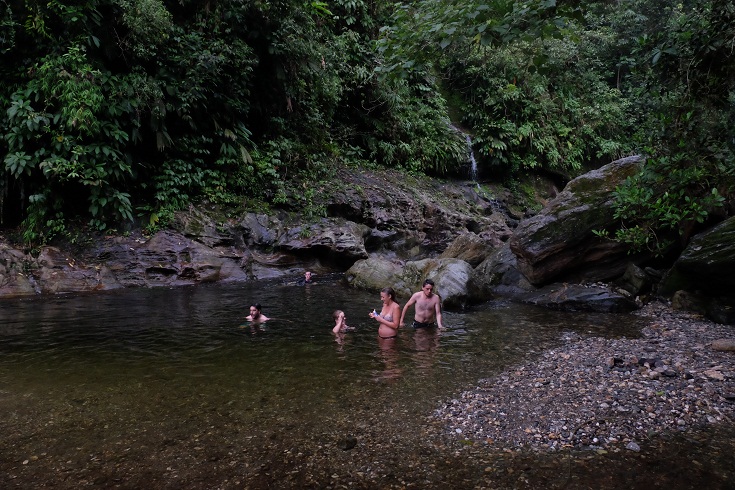 7pm, dinner time at candle light after some Aguila beers.

Many people there, beautiful atmosphere. We all made it! 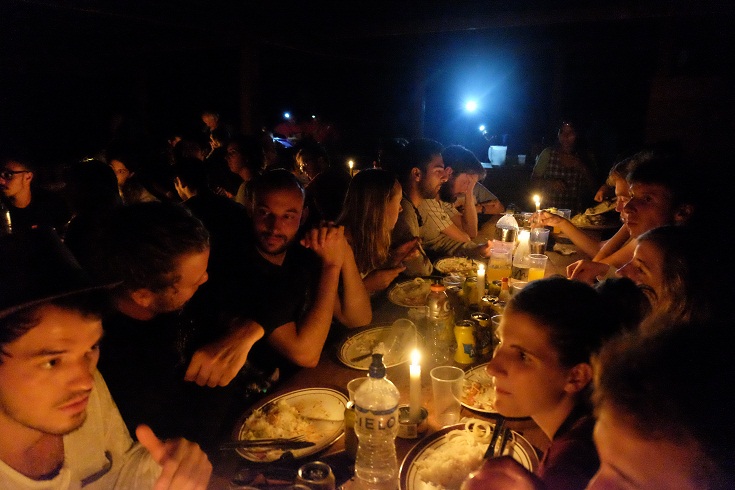 One of the guide, Bruno, came to chat with us and told us lots of things about the Lost City and the situation in Colombia before, which was really great as usually when I am on a site, I am too distracted taking photos to listen to explanations! But having them beforehand was really great.

An interesting insect visited us, it is apparently called grande culona, big ass, and is a kind of big ant with wings. 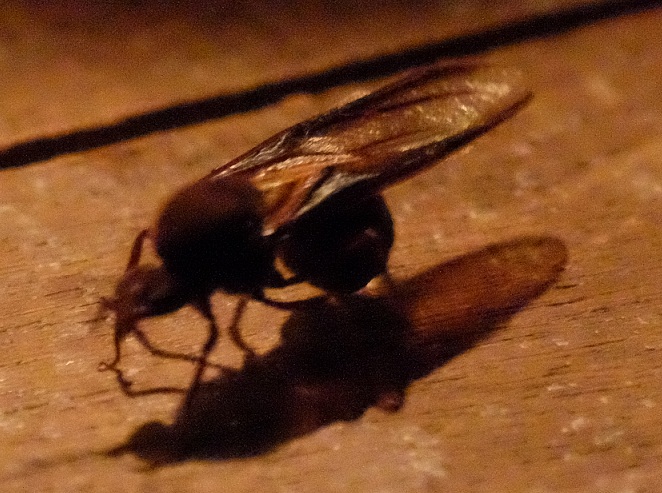 That evening we slept in hammocks, but somehow I forgot to take a picture! Those hammocks were cool. It took me a while to figure out how to sleep in there but somehow finally managed to fall asleep. It was a big cold though. I was glad to have a long sleeve jumper and my silk bag to fully feel like a butterfly in a chrysalid but I regretted not having taken a leggings with me for additional warmth!

Tomorrow morning, we were going to explore the Lost City. That was so exciting! Youhou!!!!