You wonder where I have been? 🙂

I discovered a piece of paradise and just stayed there for 10 days. Seriously!
Has it ever happened to you to arrive at a place where you plan to spend 2 days and realise you found gold and wanna stay longer…and actually do it!!!??? This is what happened to me when I arrived at Casa Elemento on the Sunday 12th July 2015 evening, near Minca. I thought: “Woooooo!!!! I loooooove this place!!!!” And what was supposed to be 2 nights turned into 3 nights. And after 3 nights, I said “actually, I think i am going to stay one week!” and I volonteered there for a week and in total I stayed 10 days. If I was not flying out from Ushuaia in 5 months, I would even have stayed longer!!!

Casa Elemento is a true piece of paradise. I saw so many happy people there, it was incredible. I was also enjoying sitting at the bar or on the sofas and seeing new people arrive every day and I could read the same thoughts on their face as the ones I had had when I got there: “Jeez I love this place! Is it for real? This is amazing! I wanna stay here! Wooo, this is incredible!” and often I also heard “Oh I wish I had not booked a bus or a flight! I wanna stay longer!”

Some people say that Minca is addictive. Others that when you are at Casa Elemento, you feel good. You feel like on a remote planet. You are still connected but detached from the outside world. There are some vibes here that created something, I can´t point my finger on what exactly, but there is this little something that created paradise there. There are actually a bunch of elements. The place itself, the landscape, the way Jean and Jack and Andrew the owner of the place who rent the land from a Colombian transformed it, the fact that there is no WiFi and people have to talk to each other also. A combination of ingredients which have turned this place into the most magical place I have found in literally all my travels so far.

Alright, but let´s go back to the start and introduce you slowly to the magic of that place. Not sure words or photos can do that though. You may simply have to go check it by yourself to understand what I meant.

Once upon a time, on a Sunday 12th July 2015, after having done 2 dives in Taganga in the morning, I met again with Martina and Lynn at the Dropbear hostel in the afternoon, and we took a small taxi from Santa Marta to Minca.

From Minca, we had to jump on motorbikes going up for 30 min. The alternative was to hike up for 2-3 hours, but it was already 4pm which was getting too dark for hiking. The ones who know me will know that since I had 2 motorbike accidents in Lao while touring Asia about 3 years ago, I am not a big fan of motorbikes.. So I very reluctantly jumped on it. The road up was a dirt road as crap as the one on which I had my first accident in Northern Lao, and I was having flash back of that day while we went up. Anyway, all went well. So here we were, ready to go up.

Ultimately, we still made it there. I didn´t take photos that first evening as we got there quite late and with Martina, we went straight to pitch the tent before it was totally dark. This is the view I had in the early morning from my tent, that first Monday morning, but also every morning for 10 days, an awesome view to wake up with!

When I say from my tent, I literally mean it.

We can see Santa Marta in the foreground.

Casa Elemento has a “Big Hammock” in which 10 people max can be at the same time, chilling out with a beer or guitar to enjoy the amazing view of the surroundings. This is Martina at the guitar in the morning.

Casa Elemento has 2 cats, Pancake and Biscuit. Somehow, I almost never saw Biscuit, but always saw Pancake, the happiest cat in the world.

On the first day, we went down to Jungle Town.

There, there is another big hammock in which we chilled while waiting for Alex to do some ziplines and monkey imitations. This one looks like a giant spider web in which we would just be flies caught in the net. 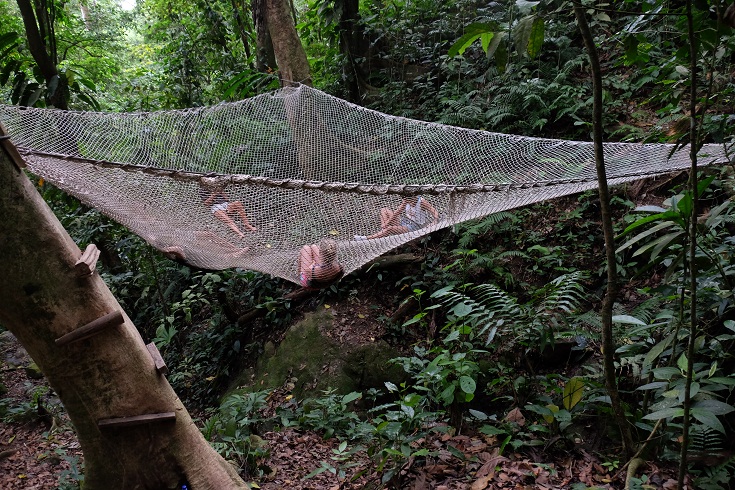 That´s the view of the canopy we had while lying down in there.

First, we started walking on some metal thick line while still holding some help lines on both sides. Then we walked on the yellow line trying not to fall. without the helf of the 2 lnes on side. 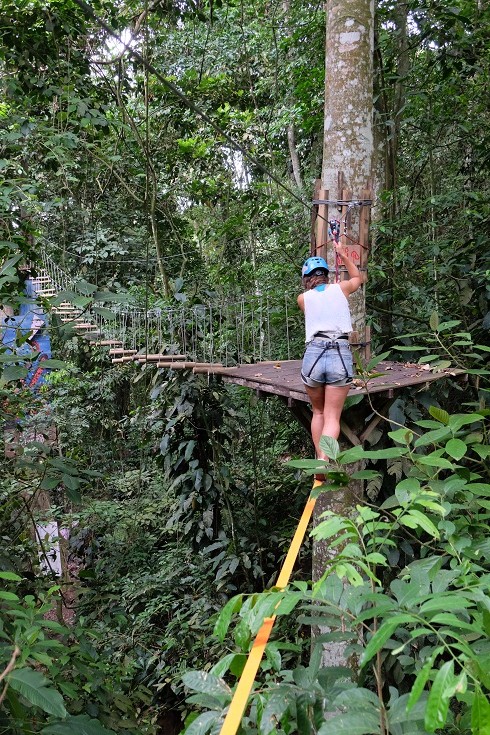 Then we walked on the swinging bridge and then down the bridge again via the zipline. 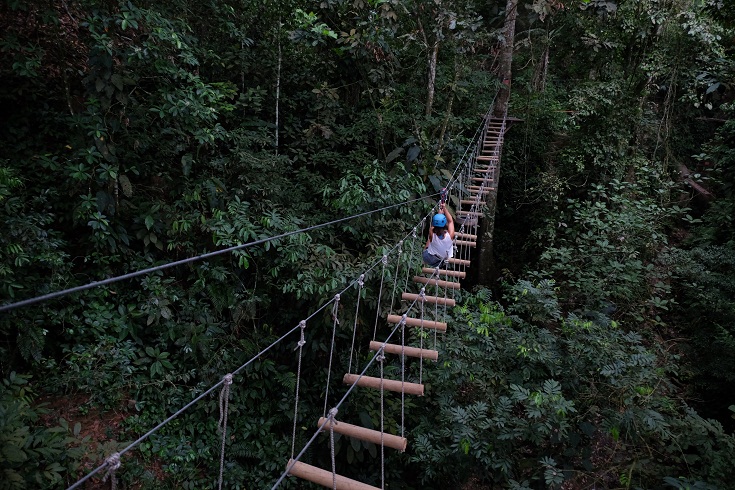 And then we did a bit of climbing.

There was a tough bit half way when switching from the tree to the board where Martina and Lynn didn´t manage to climb but my few times at Urban Climb in Brisbane helped me go all the way to the top, yeah.

After that, we chilled out around the sofas, the pool and the bar, like Bonsy the dog you can see in the foreground.

View from the hammock near the pool of the Big Hammock.

Big Hammock and the view 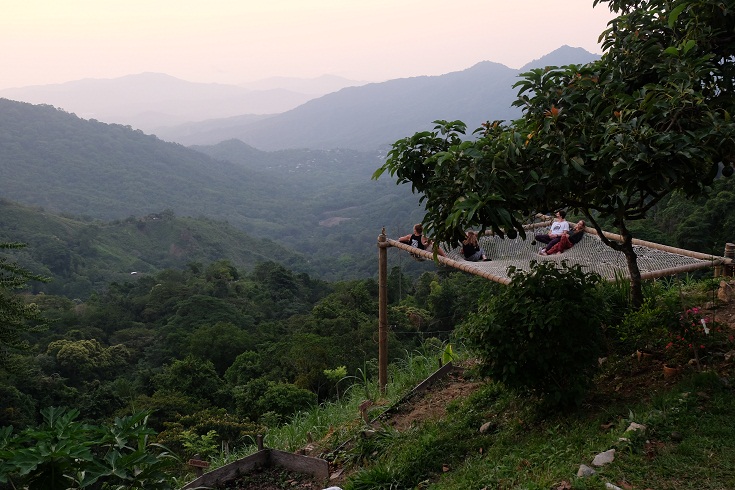 Even Juanitette the smurfette made a friend at the bar. Saying that, that guy was the rudest hamster I ever heard, swearing all the time, so I got a bit worried about the type of guys she started hanging out with! 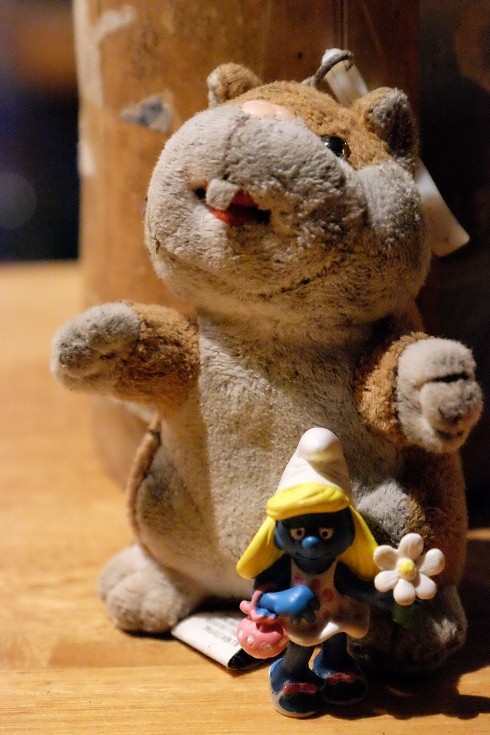