Here was the introduction to the 8-day cruise on the San Jose boat that Galasam had given us on paper.

The trip started by boarding this bus which took us to the boat. 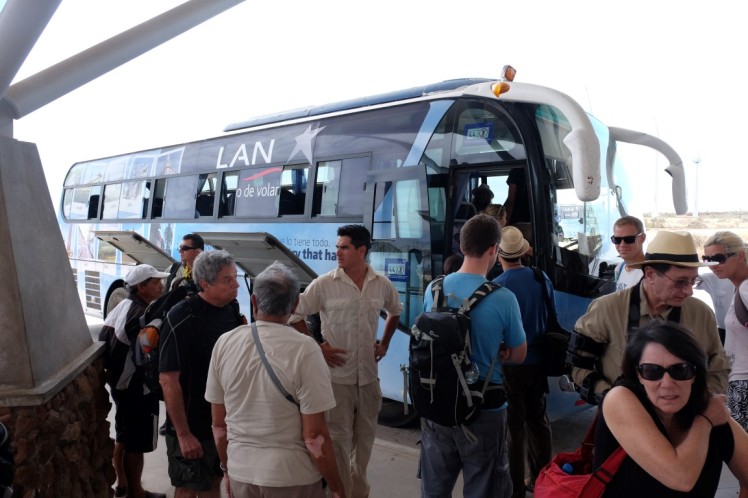 We got to the pier where we waited for the panga (small boat you see arriving on this picture) to pick us up and take us to the San Jose boat (the big one in the foreground). 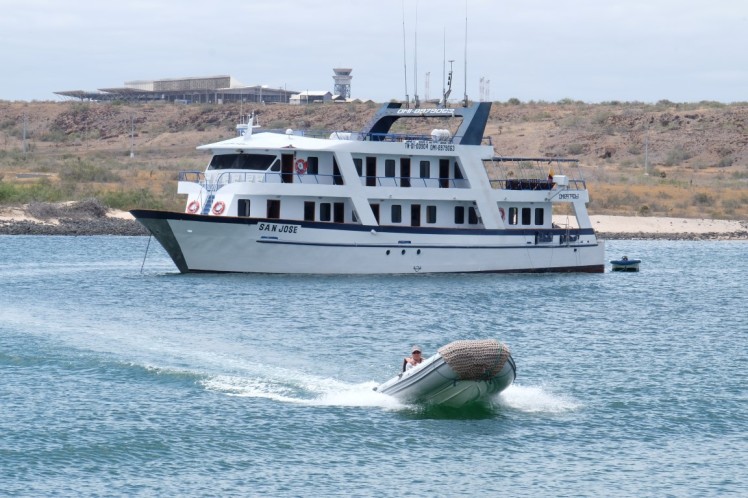 While waiting at the pier, we saw this crab shell. Carlos our guide for the 8 days explained that when they grow, crabs leave their shell and go behind rocks for 3-4 days, the time it takes to make a new shell. I didn`t even know crabs did that!!

We were about to have a lot of “first” during this trip. So hey, here is our first marine iguana! And we haven`t even got on the boat yet!

On the panga, off to the boat! In the centre our panga driver, whose name I don`t even know actually, on the left Mary from Australia and Cary who are from Wellington, New Zealand and just spent 18 months living in Toronto and after their trip will go live in Newcastle in NSW.  On the right, Catharina and Chris from the Netherlands near Utrecht. 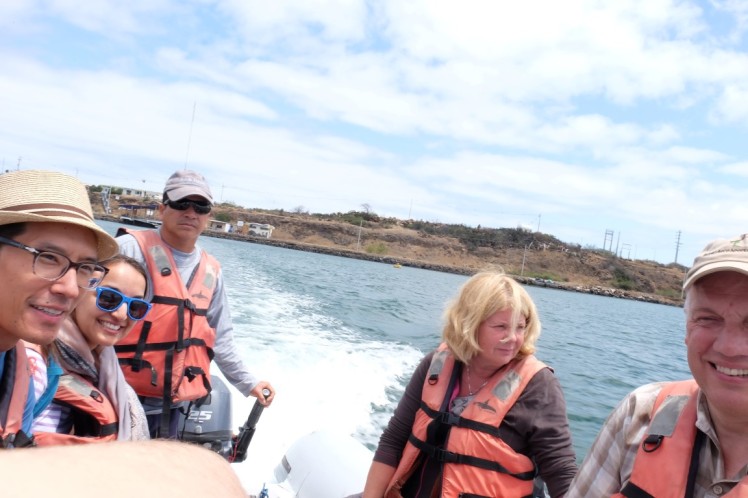 On the boat we first got distributed into cabins. Here was our twin beds cabin.

We had a cool turtle on the wall, maybe Lonely George, the turtle which died a few years ago and was the last of its specie, who knows!

Long chairs and bar on the second floor 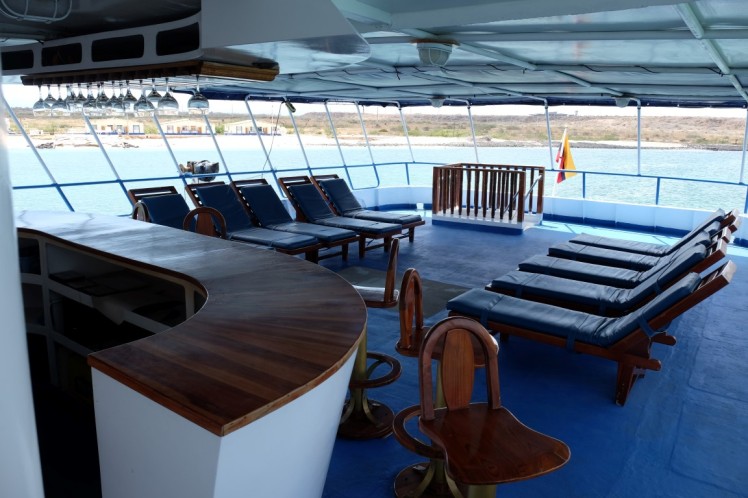 Lunch. Every day it was just amazing food! 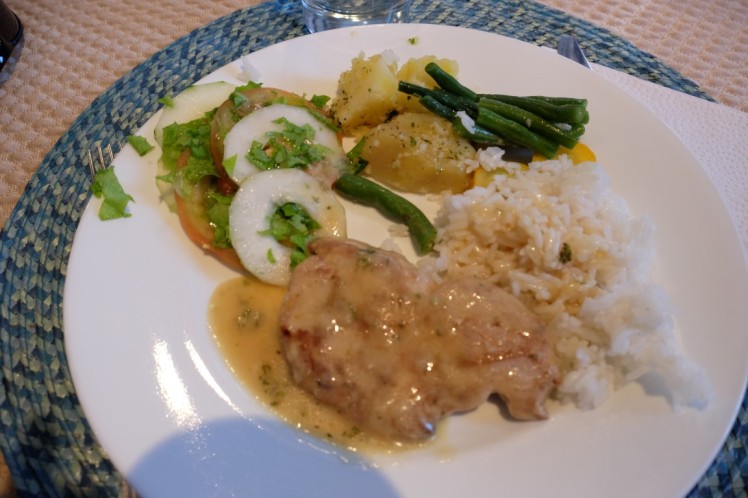 Even the table feet were funny

After lunch, we had a briefing about the security on the boat and some introduction about the planning for the afternoon and then cruise. We waited for Tatiana who was on an afternoon plane. While waiting, we could observe the surroundings. Bobby birds were diving like crazy in the water to catch fishes, sometimes hundreds of them at once like torpedos. I remember that we didn`t know the names yet and with Cary we grabbed a book of the birds which was on the boat and looked into it to try to find the name of the birds. We thought they looked like storm petrels but later learnt that they were the bobbies, the one which has blue feet and that storm petrels are way smaller and different! So funny when you jump into a new universe how everything looks so new and unique and authentic and unknown!

Over there on the shore we could see a few seals, our first seals! Exciting! 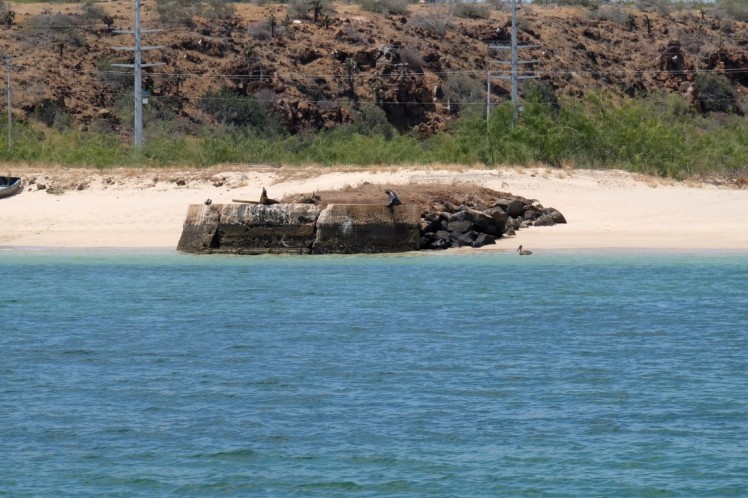 Some fregate birds hovering over. 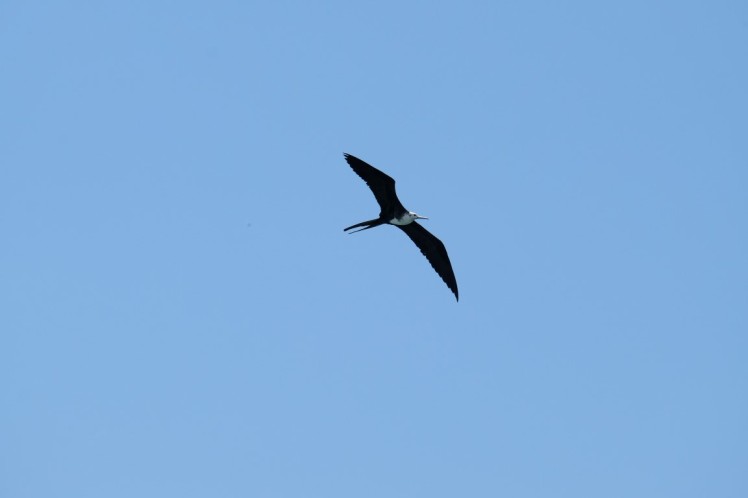 Tatiana arrived and we started cruising, leaving Baltra and Santa Cruz islands behind us. 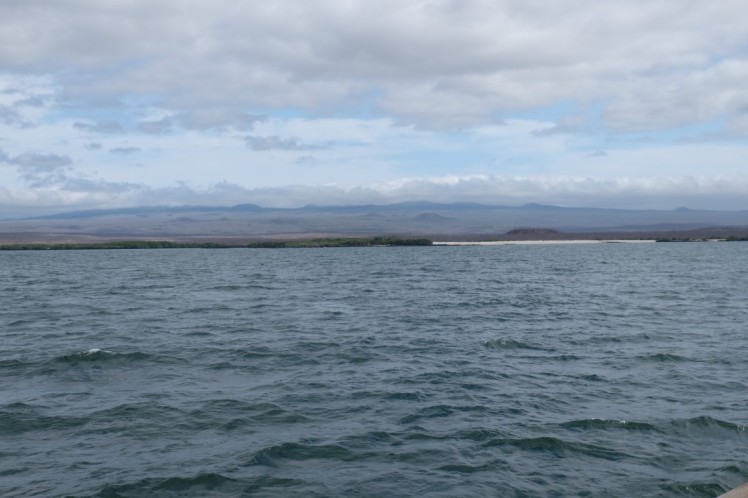 I remember Patrick telling me “Hey look, over there, we can see the delta between the two islands!” 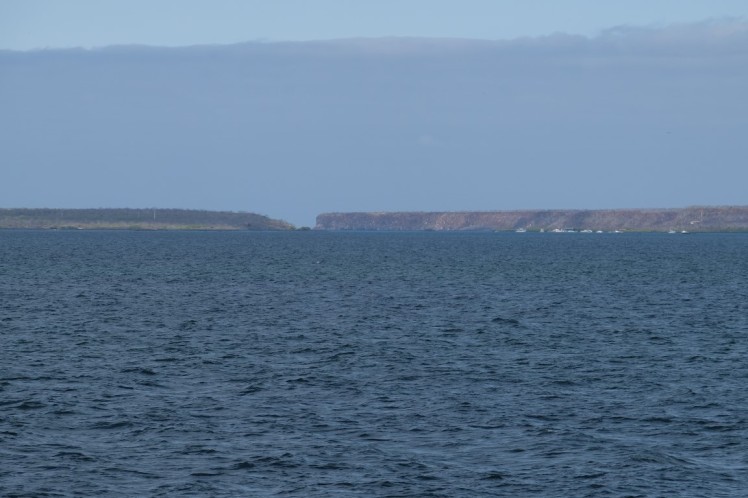 Here was the introduction text we had about the first day.

So off we were to the Bachas Beach. The pangas waiting for us to take us there.

We got to the island, we can see the boat from there. 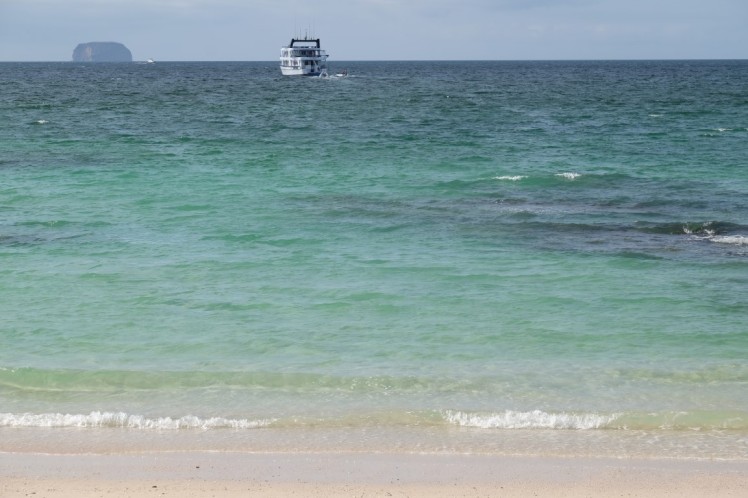 Bachas Beach was very beautiful.
The pelicans were cruising above, flying above the water so close to it, what a majestic animal.

There were iguanas, lots of iguanas! Some were even rude, pulling their tongue to us! 🙂 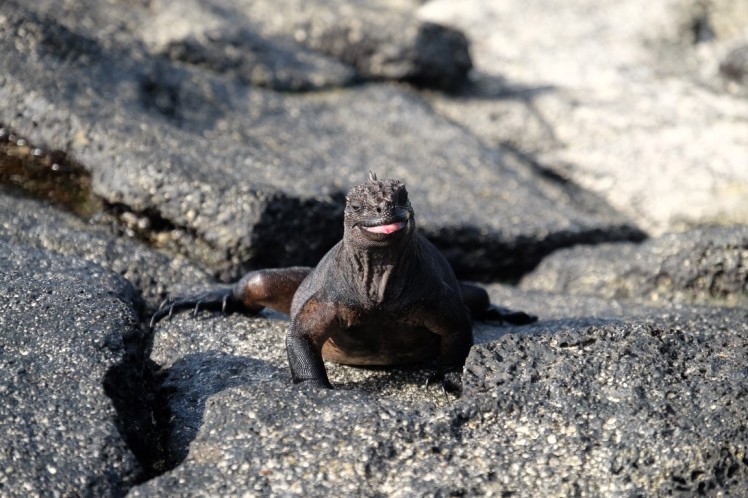 This is a hole in which a sea turtle came to lay some eggs. 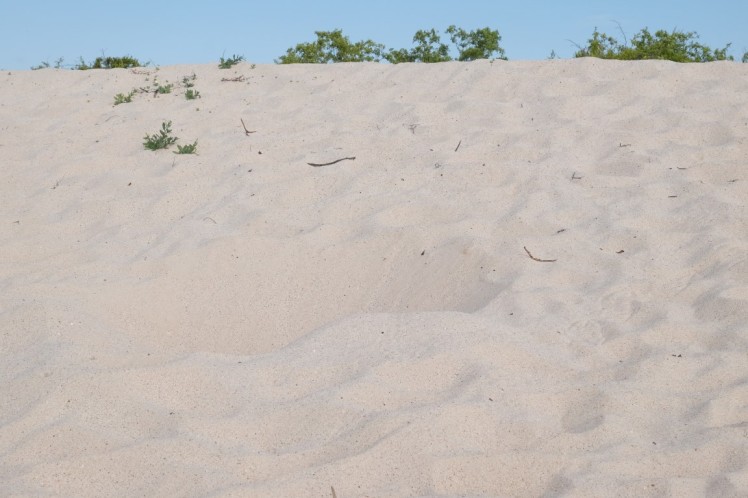 Pelicans are like ostriches sometime, very shy, they bury their head in the water the way ostriches do that in the sand.

A not that shy pelican

Guess what we are photographying?

A flamingo! Our first flamingo! 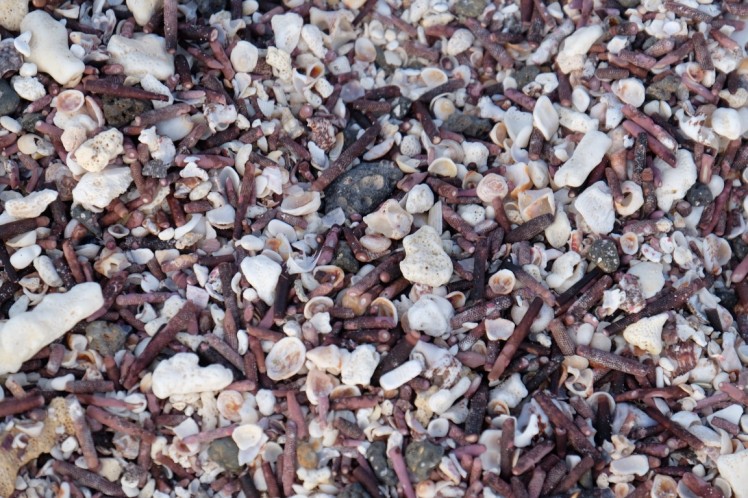 Renate and Achim, German biologists who spent a lot of their life in research in Antarctica! So interesting! 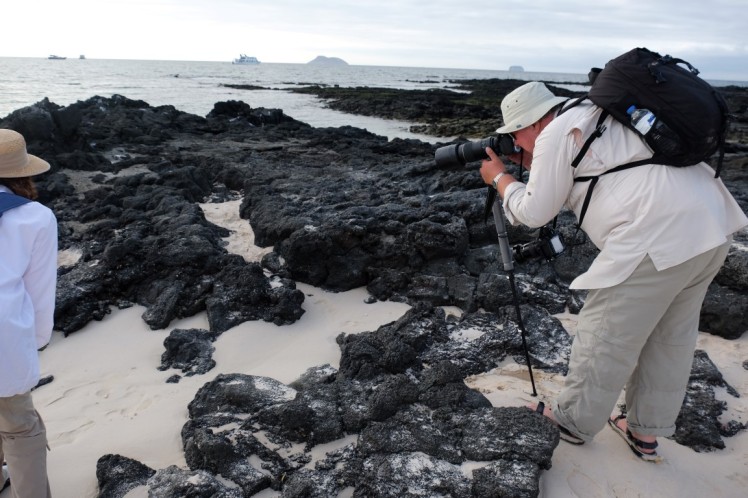 I think Achim was shooting this iguana, posing for the shot.

Can`t remember the name of these ones, maybe oyster catchers.

An unusual seal. Walks almost like a flamingo. So interesting animals you can encounter in the Galapagos! 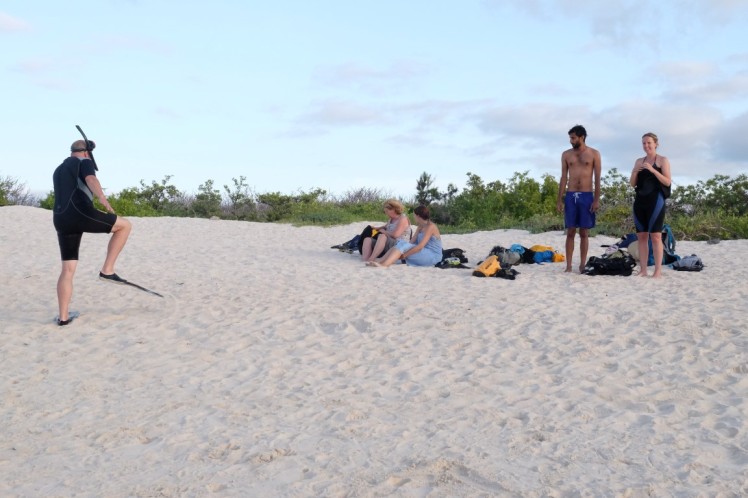 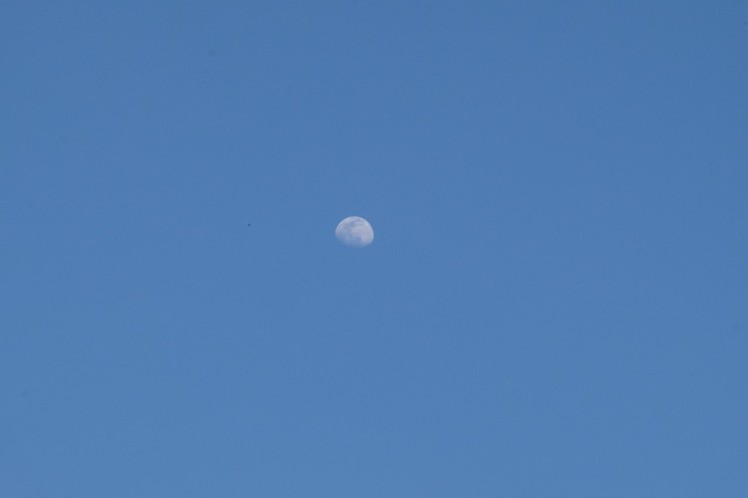 Time to go back to the boat. Our group, the San Jose Family, as the guide liked to call us. 🙂 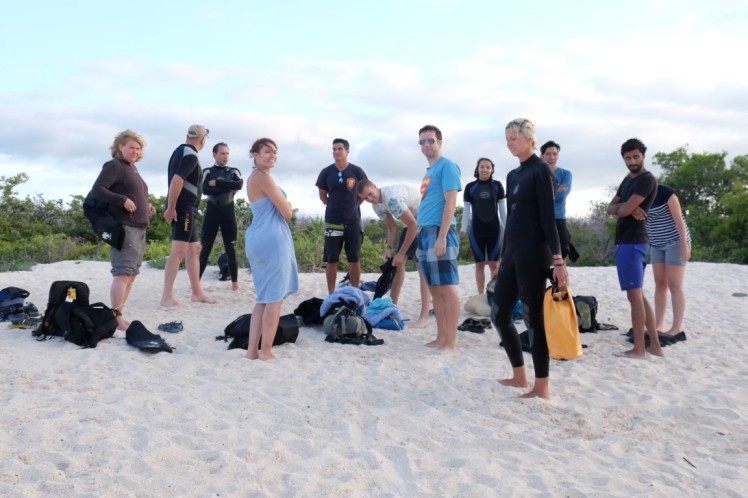 Wonder to which animal those footprints belong. 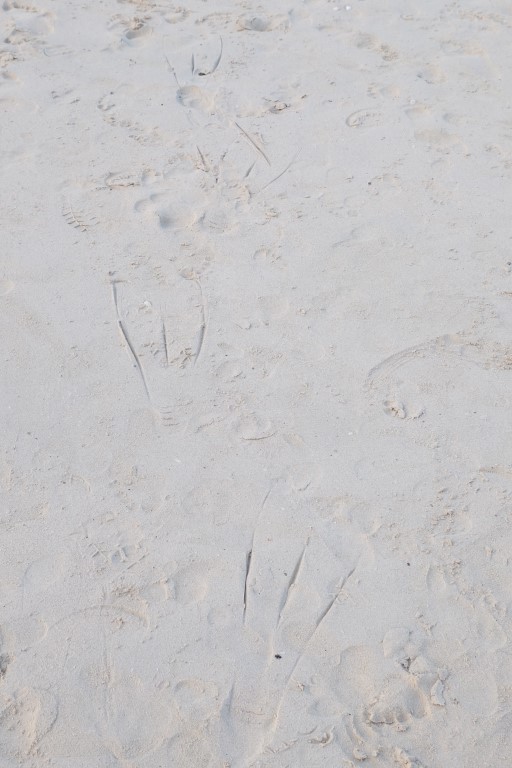 Back on the panga after our first magical walk. 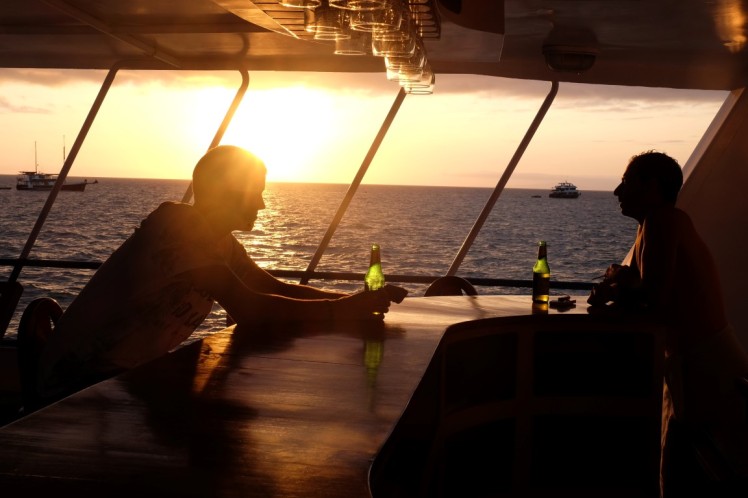 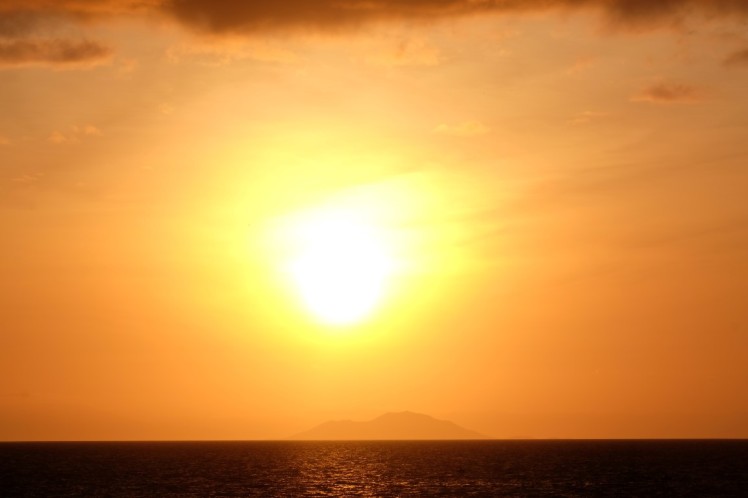 In the evening after an amazing dinner we met the crew and all of us introduced themselves. There were the guide and 9 crew members, the captain, the second, another second, the chef and his help, the cleaning lady, 2 panga drivers and the machinist. They did an amazing job for the 8 days we were to spend!

Tomorrow, off to..somewhere! Here was the itinerary ahead of us.

All night the boat drove from Bachas Beach to Puerto Villamil. The sea was a bit rough but not too much compared to all the stories I had heard!