We rested until 3pm. During this time, the boat moved towards the sea horse head of Isabela island.

You have the choice, what would you prefer? Sleep, read a book or listen to music?

Or watch the sea! I saw that crazy dolphin jumping like if he had been bitten by a huge wasp. It was so quick and he was far. The most crazy dolphin I have ever seen. Dolphins is the one thing we didn`t see too much in the Galapagos actually. That was the first one and one of the few.

Getting closer to Vicente Roca Point, called Punta Vicente Roca in Spanish. It was nice to see the cliffs approaching.

At 3pm we went for the next snorkle in the bay. Again, freezing, but much easier with double wetsuits.
It was a really awesome snorkle. At the beginning of it, there was a small sea lion bathing on a rock. I remember that Maria and I were trying to imitate the sound to get him to come play with us but it didn’t work. A bit later, it was my turn to swim again right next to a cormoran. What we took for exceptional the day before may actually be something common
here then? On this snorkle, there was lots lots of sea lions. I snorkled next to one for a bit at the beginning. We saw a few turtles but less than in the morning, although we are really getting spoiled with those turtles, when we find a new one under the water, we are like “naaa, whatever, another sea turtle…” I look at it 5-10 seconds and I move on to the next thing.
What was awesome on this snorkle was to swim with cormorans, penguins and sea lions. Following a penguin is really difficult because they go around under the water like torpedos, really. Sea lions are a bit easier to follow. Towards the end, I was really lucky. There was towards the end of the snorkle a big sea lion and I kept following it, and it resurfaced three times and I popped up my head out with it. The ones who had gone back on the panga said I was swimming like nuts and it looked funny from the panga, like I knew what I was doing but that it looked like the sea lion was nuts. That was my favourite moment of this snorkle, with swimming with the cormoran at the beginning. One thing we were told could be seen around here was the mola mola, the moon fish, one of the most unusual shape of fish in the world but we didn`t see it. It is a fish that is very shy and you usually see it for a few seconds only from far, but I would love to see one while snorkling or diving one day.

Then we went back, quick rinse, and jumped back in the panga, and for an hour we did the same itinerary that we had done while snorkeling, but with a camera from the panga. The other panga boat. 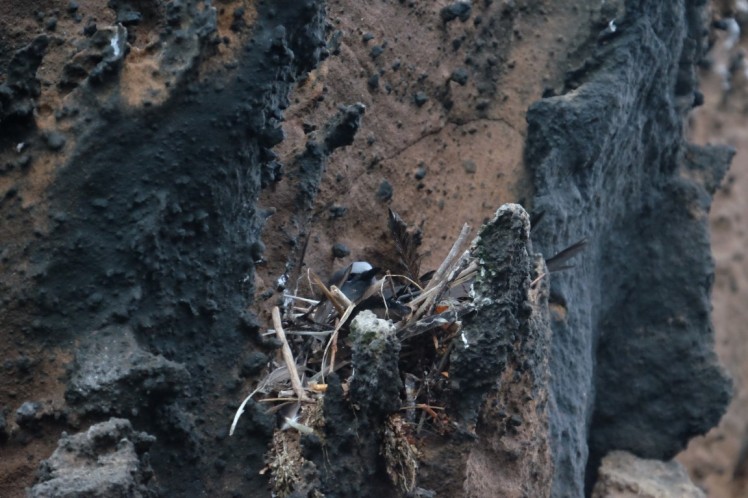 Baby sea lion, the one that Maria and me were inviting to come play with us, earlier on during the snorkle.

Got closer to the cave.

Our San Jose boat on the side of the cave. We were the only one around again, such a cool feeling.

The inside of the cave.

The water colour was really pretty.

Carlos told us about this algae being special but I can’t remember why.

Inside the cave, looking at the other panga.

We saw these two penguins coming back from a fishing tour, climbing the rock to get dry. 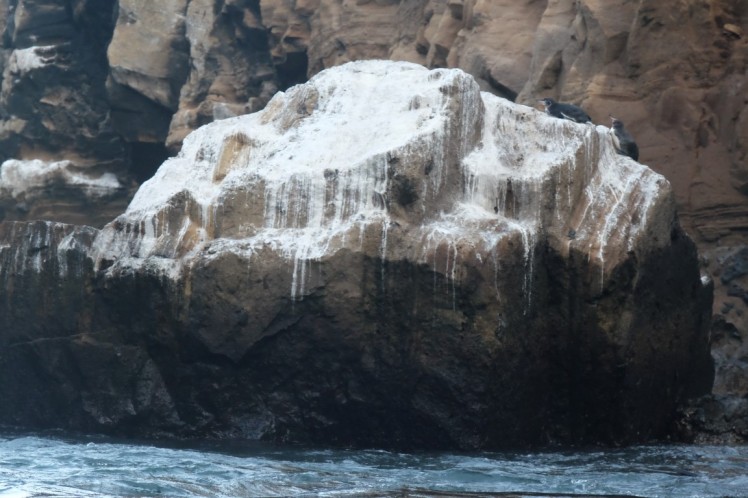 From closer. It was actually funny to watch them because sometimes the waves crashing the rocks were getting really high and it felt like they would swallow the penguins anytime but they never did actually. 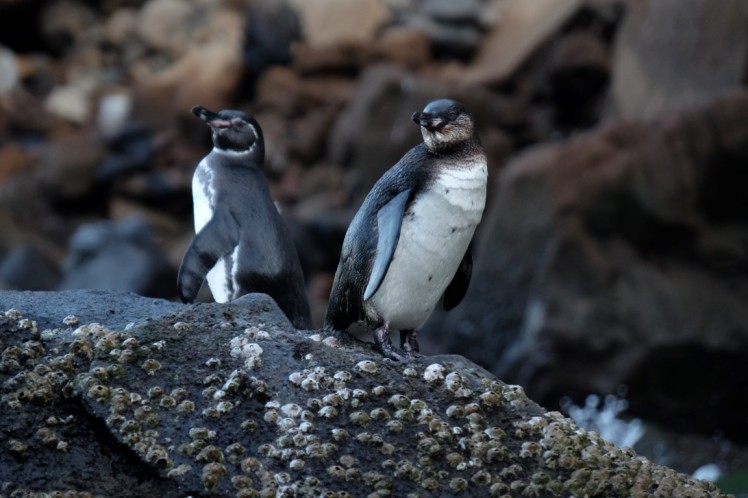 Sea lion. We saw about 6 of them playing together towards the end of our panga boat ride. 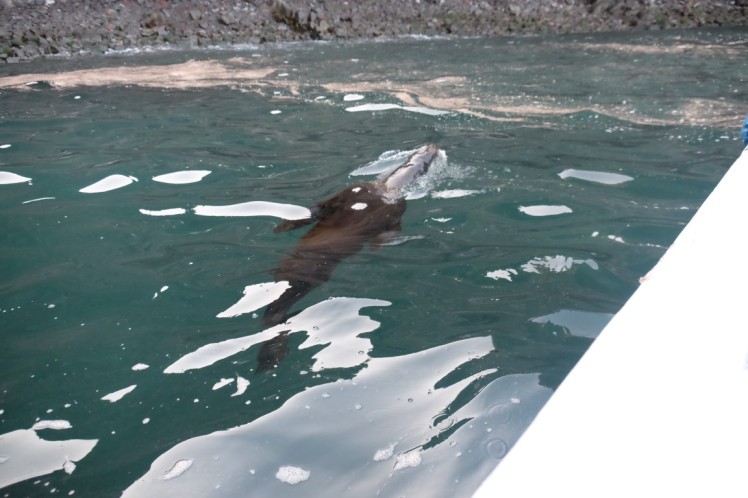 Our boat with the sunset falling and the shadow growing.

Then we went back and started sailing. It was not sunset yet. I took my 12mm prime lens wide angle and took some shots of the land we were going away from.

With Patrick, we just hanged out there shooting the sea and land and watching the sea. And suddenly he saw something strange passing by next to the boat and told me he thought it could be a mola mola. And then 4 more of them passed by!
It was really magical!! We just saw the fin popping above the water so quickly. And a few minutes later another one, and again and again. By the time I started my camera in filming mode, none of them came anymore. Damn it. They were took quick and we couldn`t get good shots.

Photo of a dead volcano we passed.

Then the full moon started rising above the hills, it looked like if it was rolling on it. Full moon rise, I love those as much as full moon sets.

On the opposite side the sun was setting. Such a beautiful moment.

Everyone was on the deck, we were waiting to cross the Equator line and be from south of it to north of it. With Patrick we both took out our GPS and started the count down. We all celebrated when we reached the 00 north south line, the captain used the boat honk.

It was just on time for the sunset, perfect timing. Half-sunk sun.

On the other side, the moon kept rising. 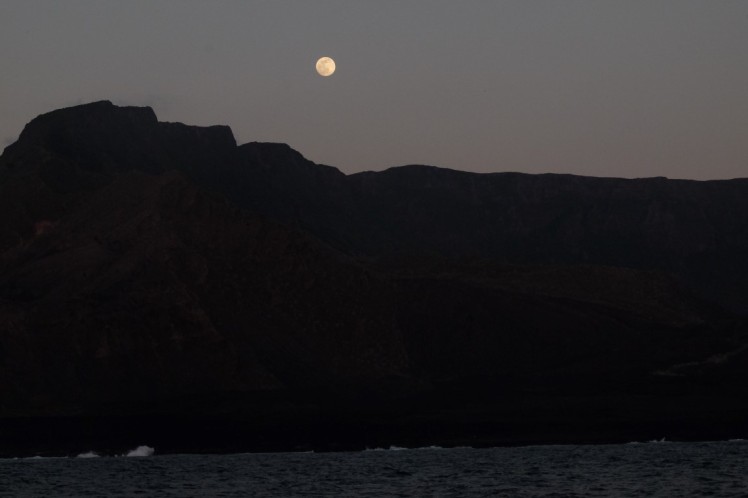 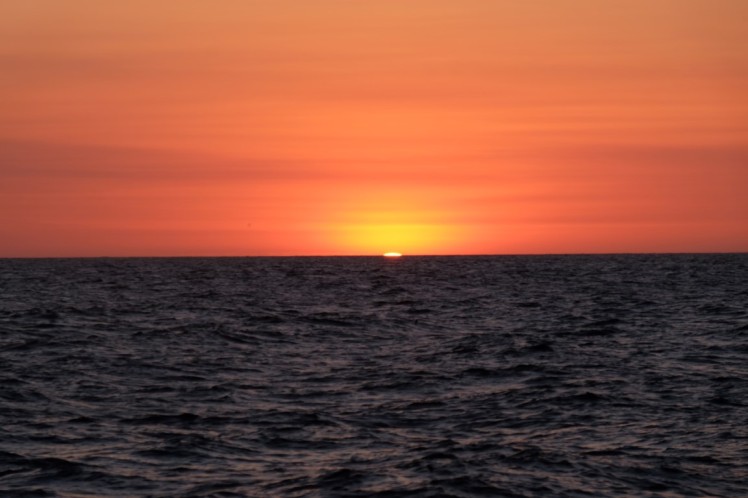 Gone. I always dream that one day I will see “le rayon vert”, the green ray, the last ray of the sun on the sea which is very rare to see and lasts a fraction of a second. It has to be a perfect angle in order to see it. 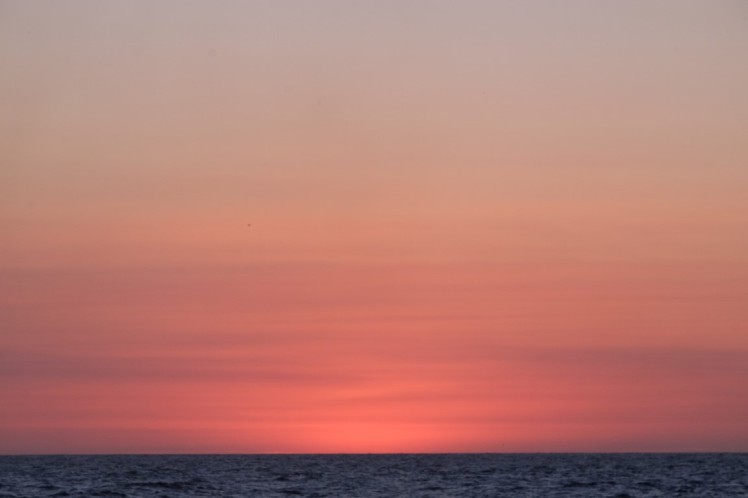 After that a bit later we went for dinner. The dinner was awesome, as usual. I know I am talking a lot about food here, but when you travel for long, good food becomes so important!

And desert, always watching out that some spoons nearby don`t steal it. 🙂

Then briefing. Then we watched some of the go pro videos Chris had made during the snorkling. I really liked those moments after dinner watching his videos. There was one where the sea lion went almost to kiss the go pro, and another one where he had filmed a turtle from really close. There was this grasshopper which appeared from nowhere in the briefing area.

Then shower, then drink at the bar with everyone, then looking at the reflection of the full moon on the sea, so gorgeous, then dodo after writing down all this to not forget those intense days.

Tonight, the boat is sailing all night and we have been told it may be a rough sea. We are going around the sea horse head and following the back of the sea horse. We will arrive at Santiago island around brekky time. Let`s hope we manage to sleep a bit even if the sea gets quite rough!