We slept really well last night even if the boat cruised all night. It was not that much rough actually. The boat kept going up and down rather than left and right. I didn`t even hear the anchor at 4am. We anchored at the northern western tip of Santiago called Caleta Bucanero, Buccaneer`s Cove.

Introduction to the day.

Detailed programme of the day.

We woke up at 6.50am. View of our surroundings.

Awesome brekky at 7am.

I have to quote what Patrick said here: “The thing with this boat is that there is not one specific thing that is awesome,
everything is awesome.” I think all of us passengers agree 100% with that!
At 8am, we went for a walk on Santiago island at Playa Espumilla. For that, we first went into the panga for a panga ride and then a wet landing on the beach. There was another boat in the bay than ours, Yatala 2 I think. We were the only two boats that morning, that was great.

The beach on which we disembarked was really pretty. 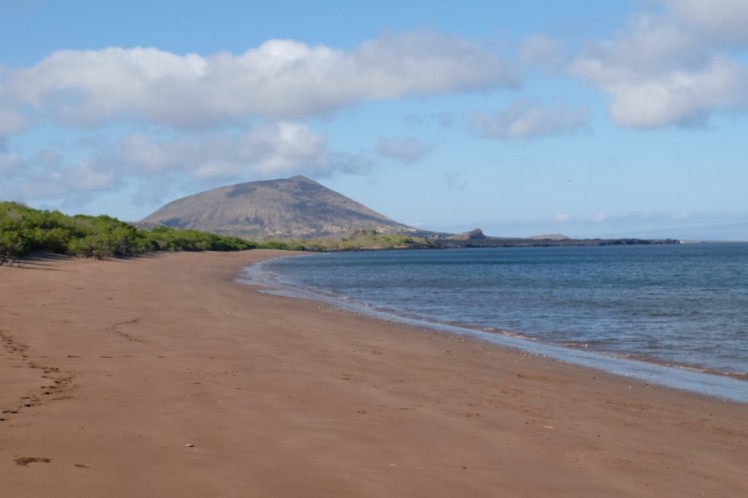 At the moment I put my foot in the water, there was a sea lion right next to me in the water. Us and the people from the other boat on the beach. 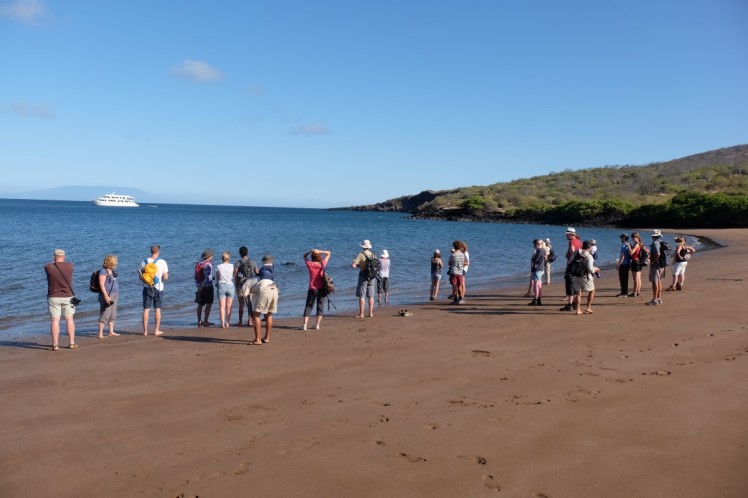 Turtles making love in the water.

Ghost crabs on the beach. 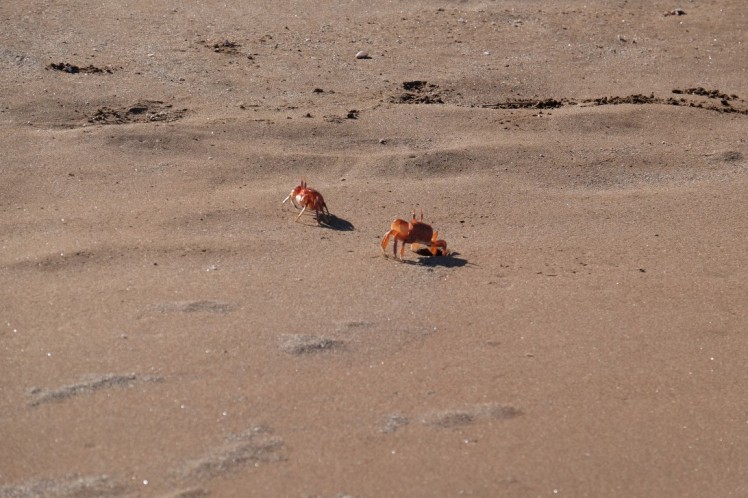 View to the right.

We started the walk away from the beach. First we saw a female lezard showing interest to the male lezard.

Whooo the walk was intense, we passed under some bushes. 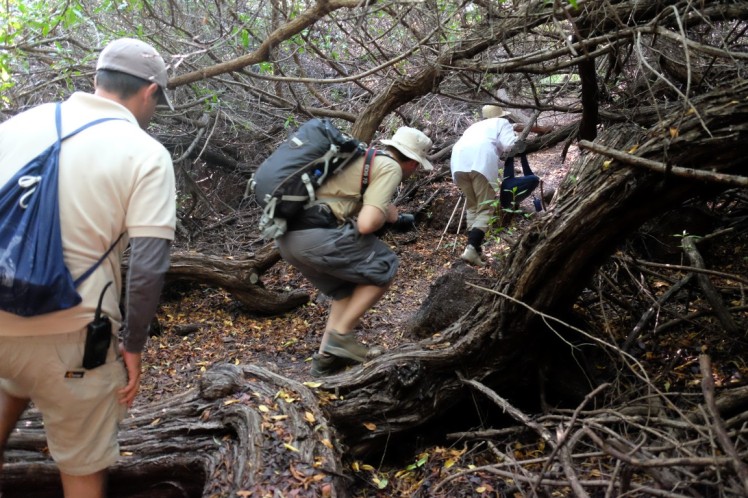 The main goal of that walk was to see hawks. It was a different landscape again, made of sand and high yellow grass. We saw a few hawks, mostly juvenile ones.

We saw a nice green lake. 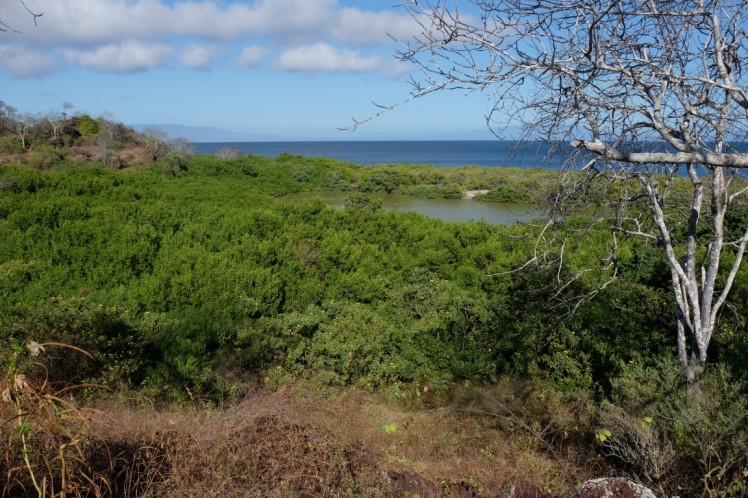 Green landscape and the two boats in the background.

Some tree with yellow flowers. 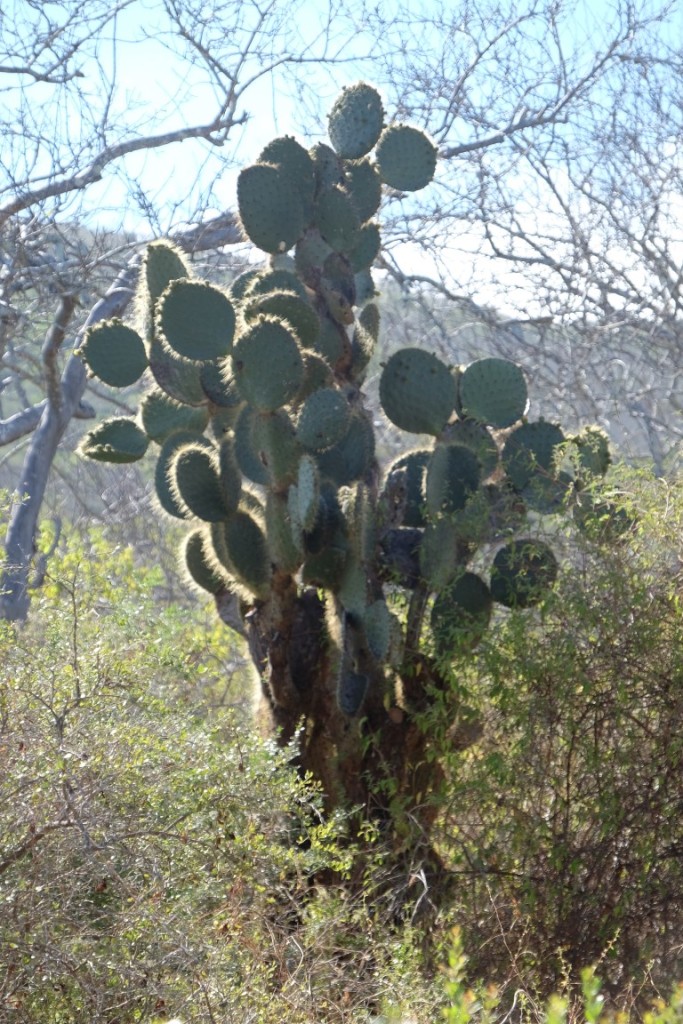 Wasp nest on a cactus leaf.

Some sandy area, probably where this used to be a lake for flamingos and that one of the El Nino phenomenon dried up. Carlos our guide had stomach ache and none of us had on us a first aid kit or even just paracetamol. Everything was only…in the boat! We could feel he had less energy and was less talkative about the walk than usual. 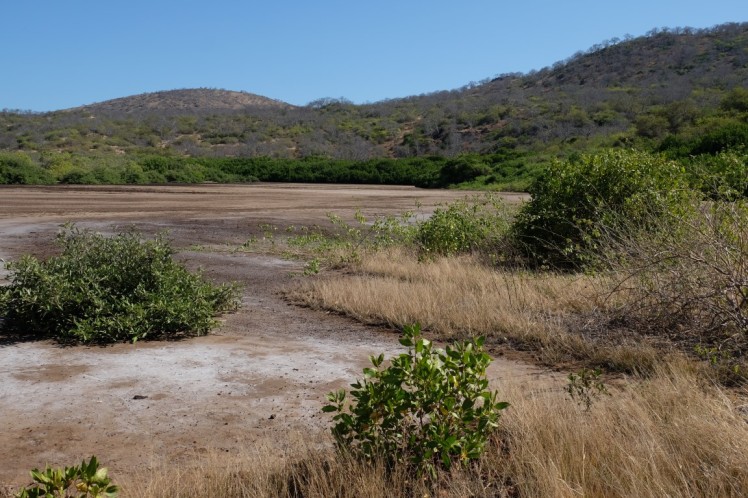 Back at the beach. 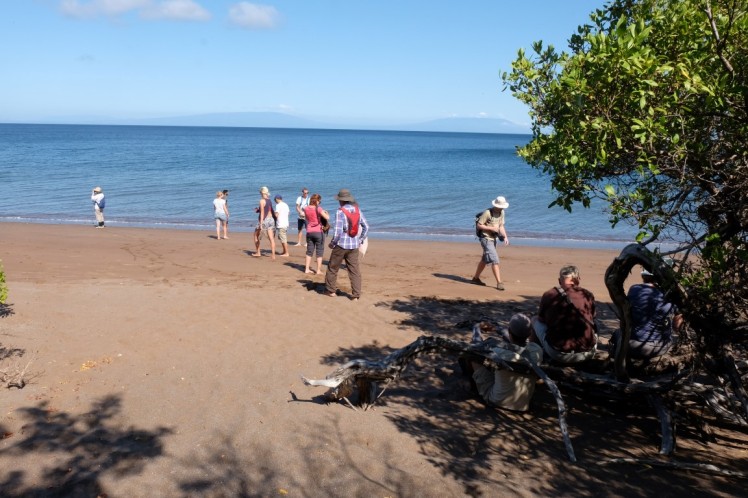 We walked to the end on the left side. The main game was to try to take photos of the ghost crabs which disappeared as soon as you approached them. I remember Chris putting his camera in front of one of the hole and getting away from it, filming and hopping the crab would get out! 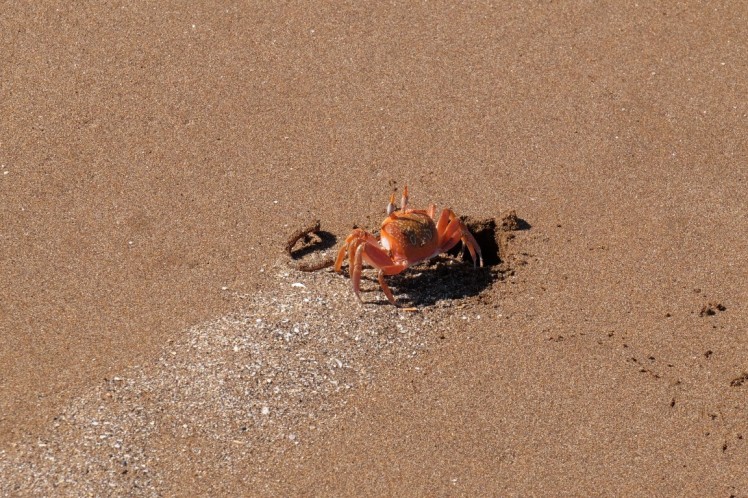 Maria, trying to see them too! Those crabs were driving all of us nuts! 🙂 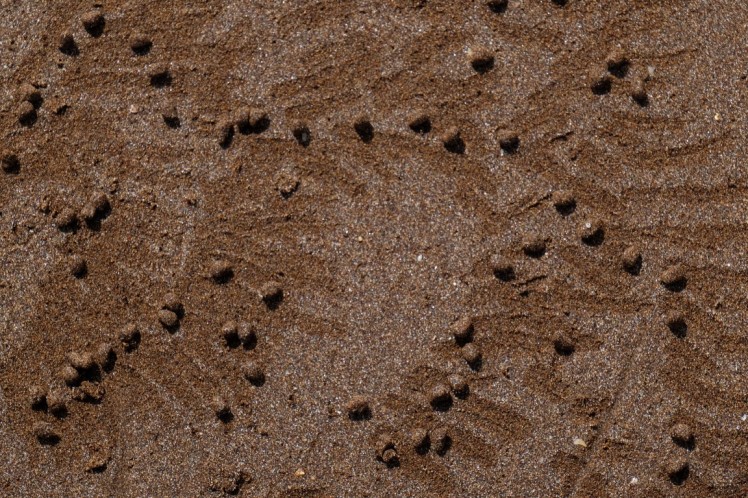 Our boat in the bay.

Crab having a bath.

Cool bird at the end of the beach. Kept singing, so close from us, oblivious to us. I am still totally amazed of how the birds here are not afraid at all of humans. They are just curious or completely ignoring humans. That’s so amazing.
Anywhere else in the world where I have been, I rarely managed to get so close to so many birds. 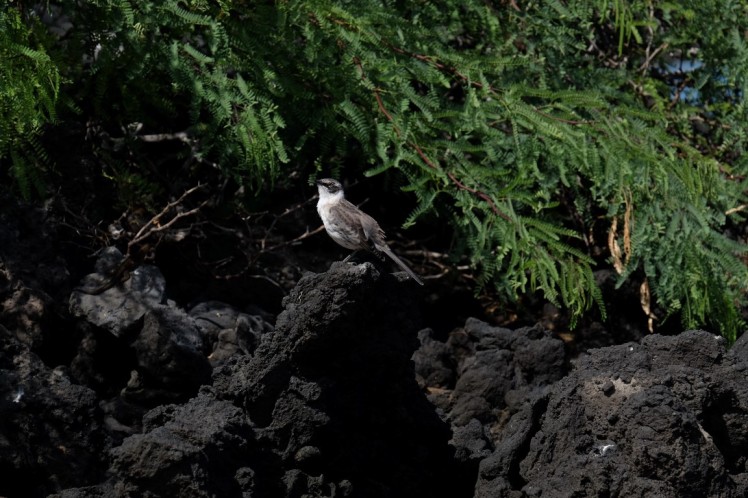 Volcanic formation at the end of the beach.

I remember that there was one iguana around and Dave said “I think I am over it, I have seen enough iguanas for the rest of my life now!!!!” It was funny. 😀

I remember how that crab here was not moving at all and we thought it was dead. Dave splashed it to check and it moved. We thought that maybe he was trying to dry up to go change shell and each morning the bloody tourists were coming and splashing him to check he was alive, and he could never dry up probably.

An hawk some spotted and told the others about, on a branch next to the beach.

Walking on the sand. During our walk on the beach we could also see sea lions swimming, pelicans diving into the water, bobbies flying above us. 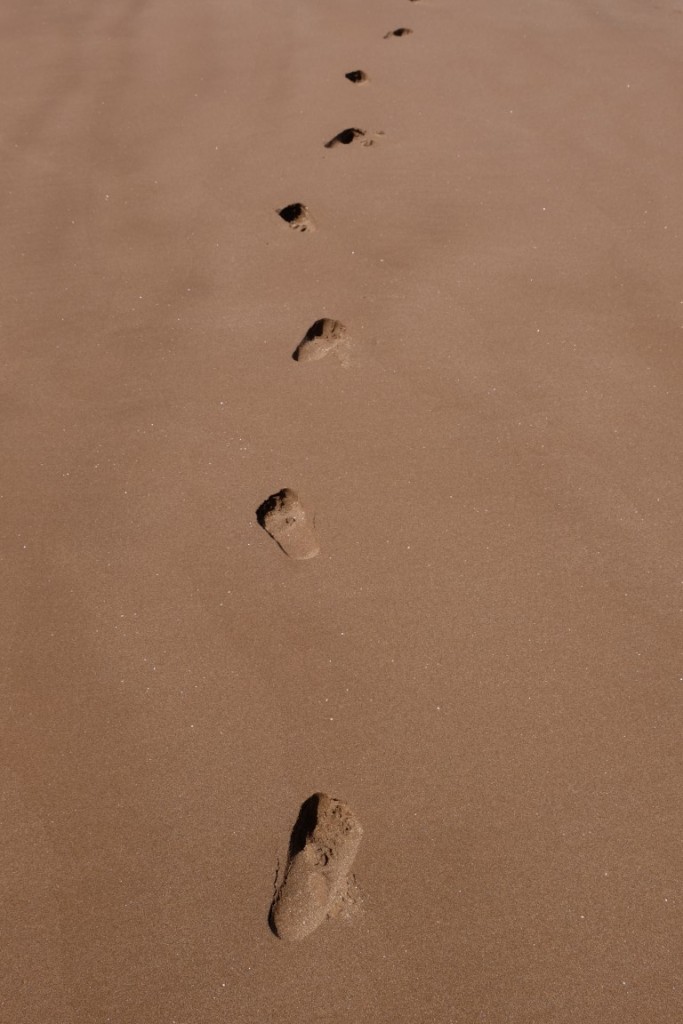 Half-way back, we got into the panga to drive back to the boat.

Pelican right next to us at that time.

Beautiful clouds above the hills of this part of Santiago Island. 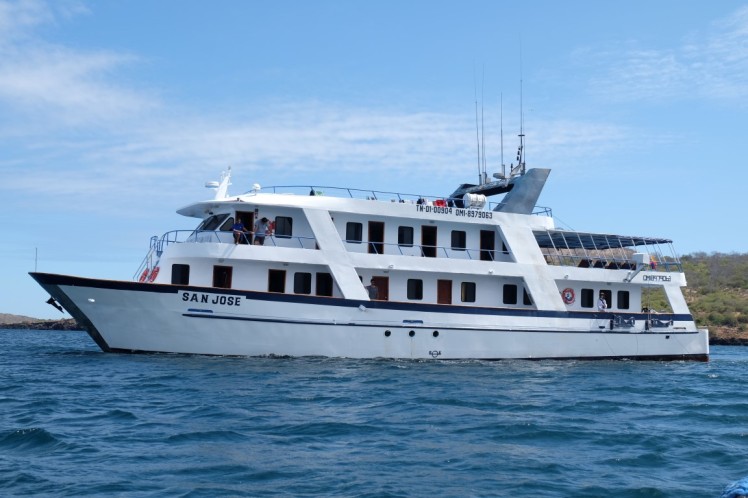 What was also really awesome was how each time we came back our beds would be made. It is just tiny details, but all those tiny details trying to head to a customer service of absolute perfection made this cruise really incredible.

We went back to the boat around 10am and got into our snorkling gears. The boat drove for 30 minutes towards a little bay where we anchored.

We snorkled from 10.30am to 11.30am in that bay which had no current and was really quiet. I had put a double wetsuit but this time, the water was not that cold. Maybe for that reason, there were no penguins or cormorans around. No sea turtles either! We mostly looked at the fishes. There was one type of fish in the water we had not seen until now called the Razor Surgeon fish.

Sometimes there were schools of this fish eating frenetically at the bottom. A few Parrot fishes.

Lots of the King Angelfish which is really pretty.

And also the Mexican Hogfish, the adult one but also the “becoming adult” one and “almost adult” one.

There were other type of fishes but not really sure which ones. Some people saw one or two white tip reef sharks but Raj, Patrick and I didn’t see any. We came back to the boat and the boat sailed to another spot. We had lunch around noon, another awesome lunch. Soup. 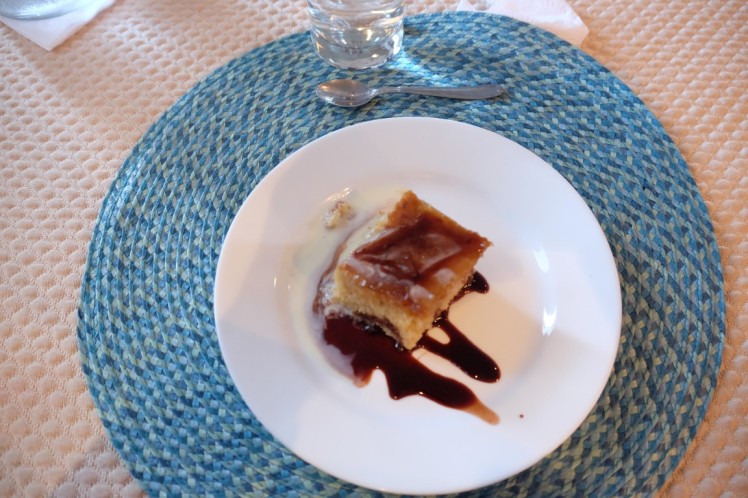 From 1pm to 2pm we chilled out and had a nap.