I could not believe that we were in September already! I had now been travelling for 2 months!!! Time flies too fast!!!

We woke up earlier at 5.45 am that morning. First picture of the morning, at dawn.

There was this other boat nearby, pretty boat!

Getting into the panga for a last walk.

We got to North Seymour island. It is an island on which bobbies and fregates are mating all year long.

View from the island. 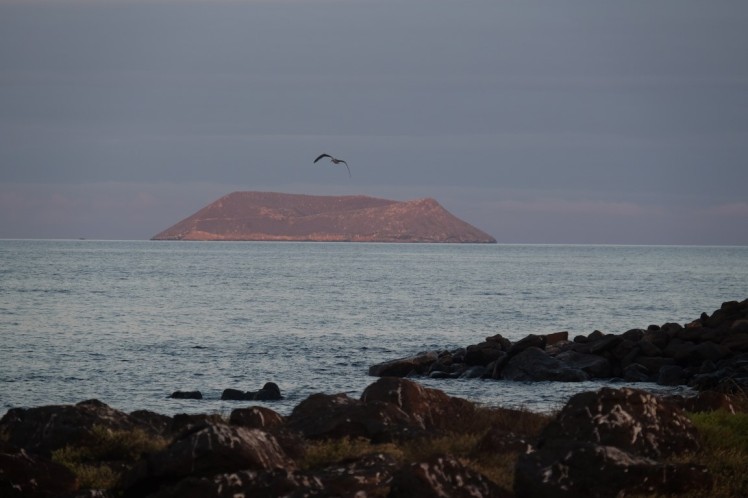 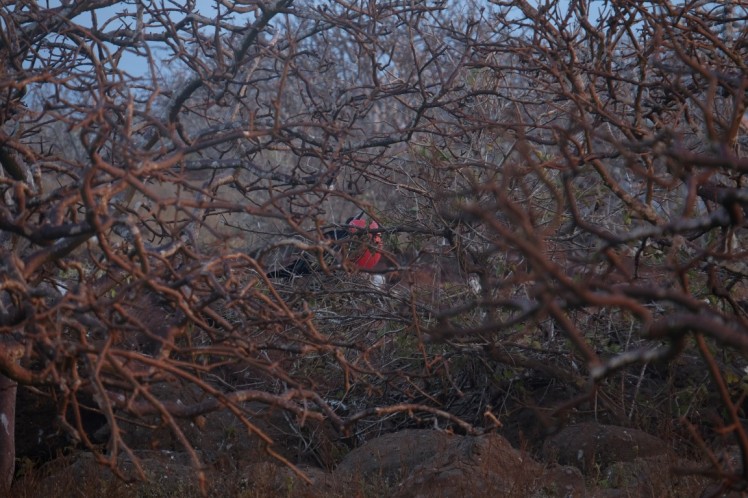 A sea lion, asleep in the morning light.

Walking on the path

Daphne on the right where we were about to go diving in the next days. 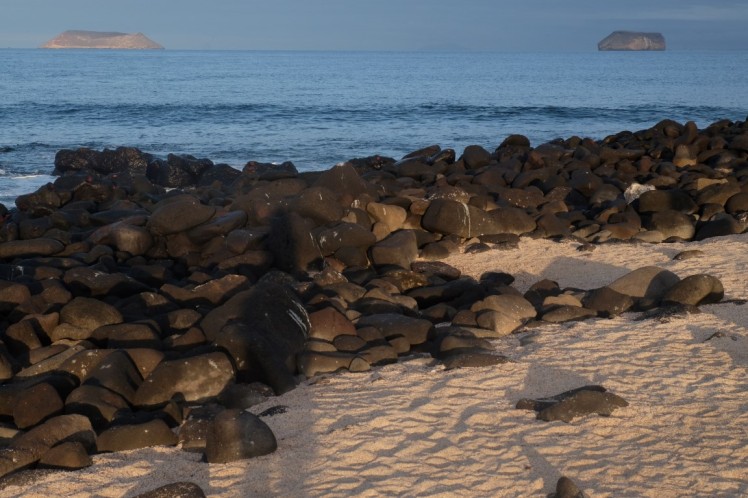 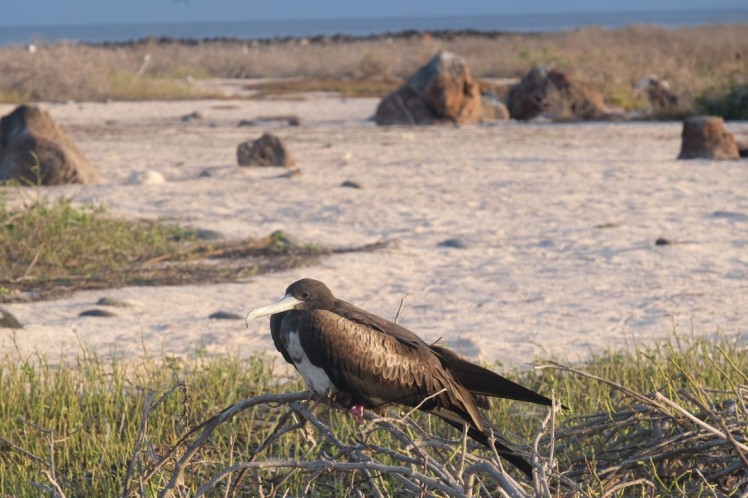 Moon in the sky. 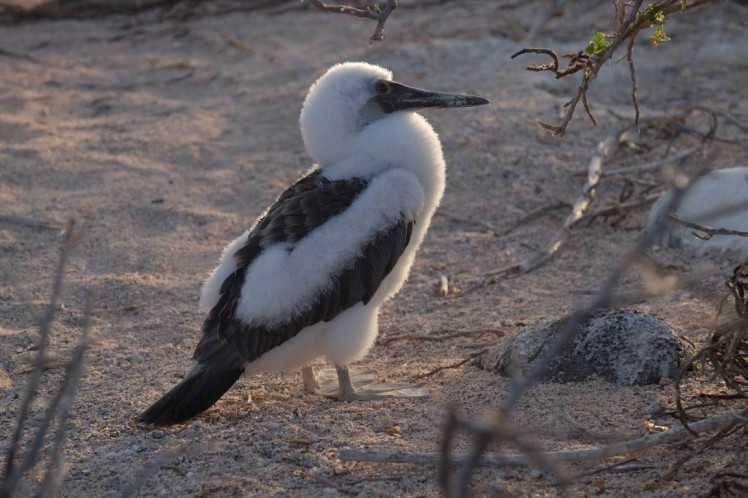 An even younger bobby. 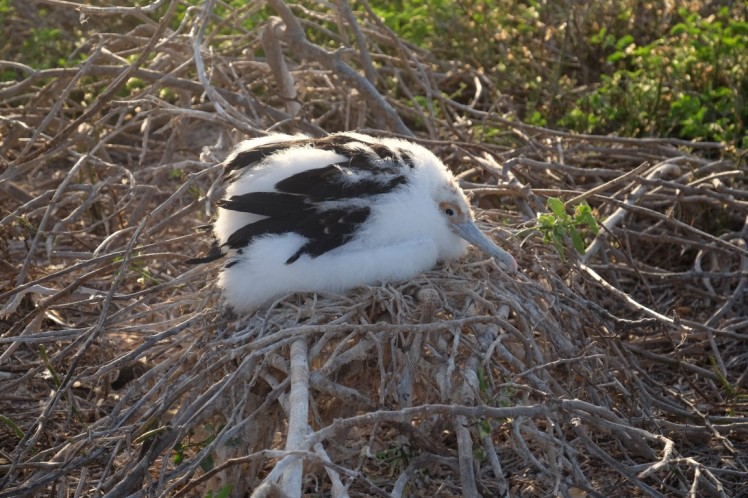 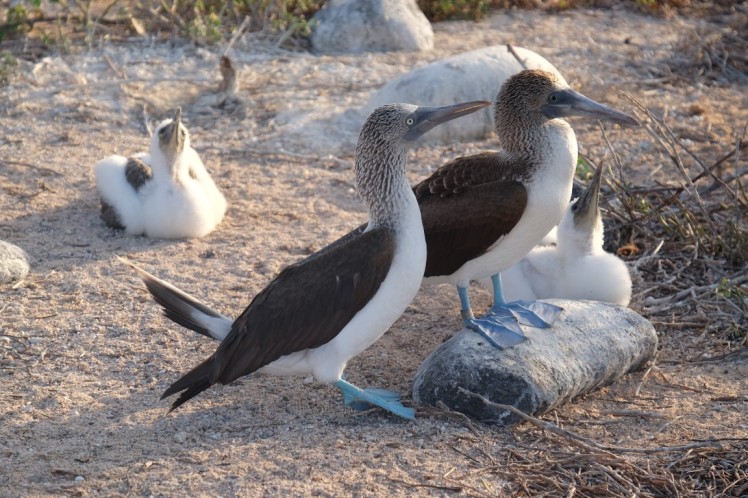 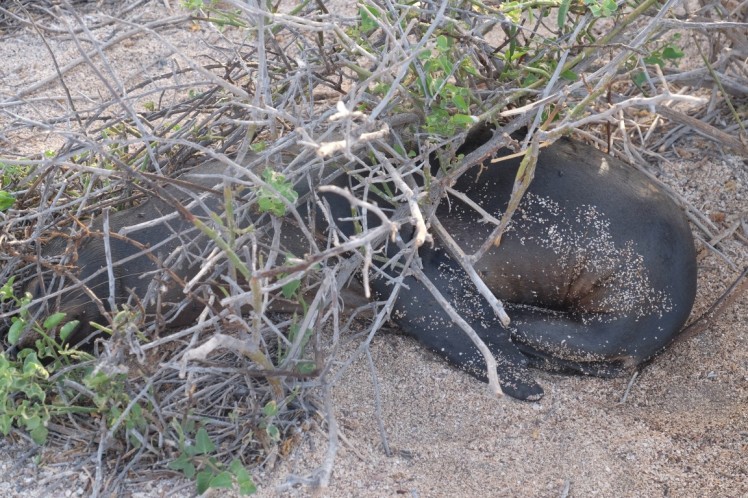 So many fregates and bobbies! 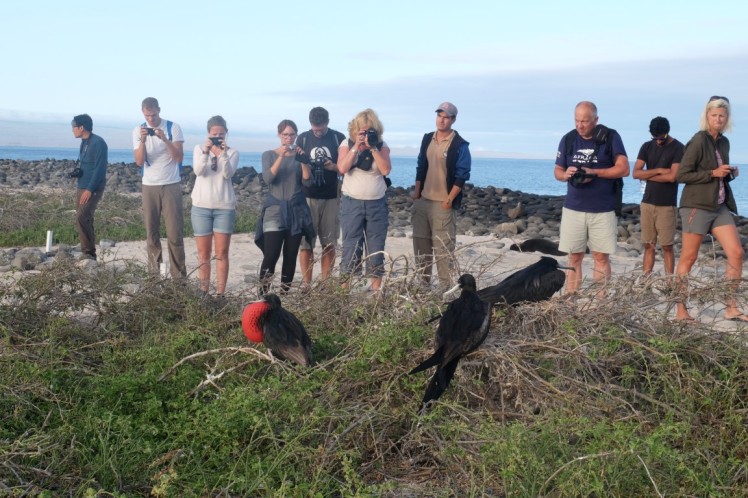 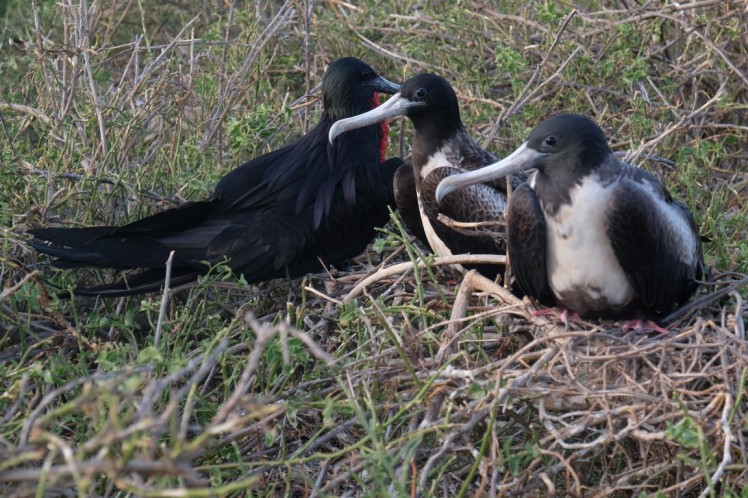 It was awesome to see again the bobby feet dance. The guide explained that not only does the bobby male dance to show to females that his feet are the most beautiful feet in the world, but he also grabs a stick in his beak to show it around to offer to nest with a female and the female can grab the stick and drop it on the floor saying it is not good enough for her. Then the bobby male would have to grab another stick and so on. If a female grabs the stick from him, then it means that she is happy to mate with him and build a nest and raise bobby babies with him.

See how the male fregate on the right has a stick in his beak? The fregate male also has to grab a stick and present it to the female and she has to accept it. Now interestingly, if another fregate male manages to steal that stick from the male, it is more interesting for him because then the female will accept him, instead of him having to search for his own stick until a female would accept it. So males fight in the air to steal each other stick from the beak!! 3D flying fights, super interesting!

We saw a couple of the fregate males growing their red neck and whistling like a turkey to attract a female fregate. It takes 40 minutes for a fregate male to blow fully his red neck for only 40 seconds of intercourse after that…Pretty hard work to get a female hey. During that time, another male could arrive and try to burst the first fregate male neck, causing damage forever.

Another fregate male growing his neck.

We also saw lots lots of seals. We didn`t even do the full walk around the island, as we walked really slow because at each step there was something to observe. Renate and Achim were going nuts, they were super happy about this island and they both took countless photos. Everyone was going nuts actually apart from David who didn`t come as he was too much asleep and couldn`t get out of bed! 🙂

Sea lion pretending it is a mermaid.

We came back onboard at 7am and had brekky, our last brekky onboard. We filled the feedback form. I had a lot of fun writing that one. Penguins are too small and they go too fast under water we can not follow them, turtles are too slow, sea lions are not playful enough…Later, Carlos told me that the captain was scared when he saw the length of the text, but then Carlos translated to him and they had a good laugh reading it. 🙂

Then we went to finish packing our bags and left them outside of our cabins.We went on the upper deck where the bar and long chairs are and had a farewell cocktail with the crew. Carlos our guide gave a speech and we said good-bye to each crew member one by one and thanked them, especially the chef who had cooked for us so amazing meals for a week, probably the most diverse type of food I will eat in my entire 6-month trip!

Us seating and standing while Carlos gave the farewell speech. 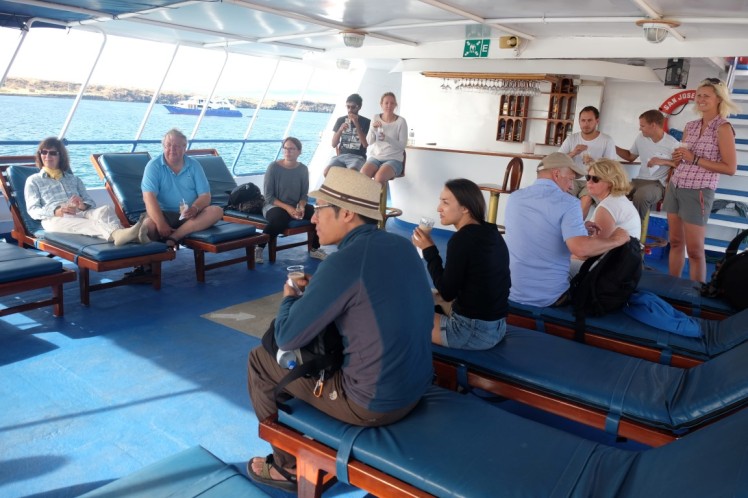 After that, we said good-bye to Achim and Renate who were staying one more week for the cruise of the islands on the Eastern side. Cruise boats function like this, one week they do a loop around Isabela island, in the west, and the next week they go around the islands on the east side. Then we all got into pangas and went to the pier where we had arrived and got into our first panga on the first day. 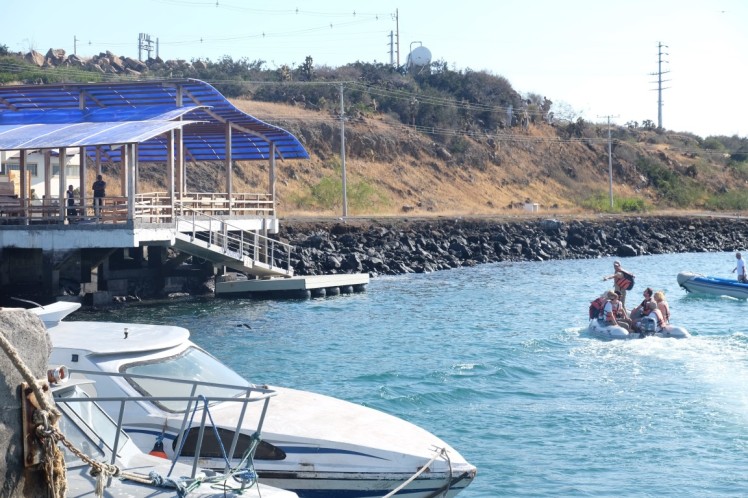 he first boat had an iguana waiting for them right on the path! When we disembarked from the second panga, there were two seals waiting for us. They of course came to say good-bye to us and once done, they left. 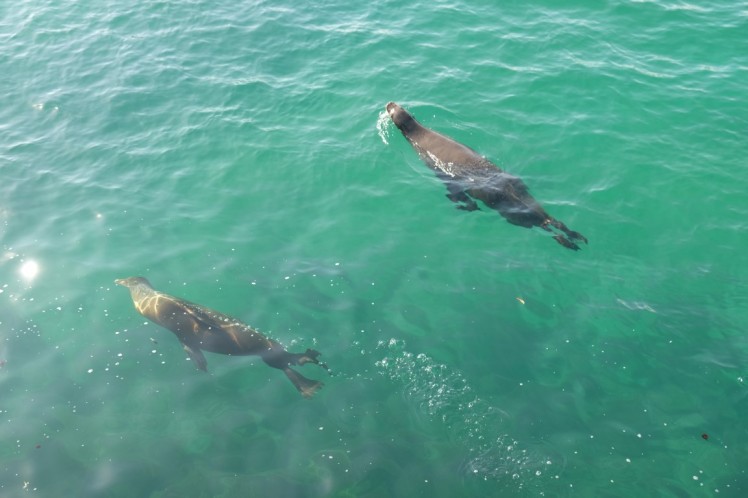 Then we got into a bus similar to the one who had brought us here 8 days before and went to the airport.

During the bus ride, I remember hearing the driver and the guy next to him discuss the El Nino phenomenon. Everyone is scared that this year it will be a strong El Nino which will warm up the water so much that lots of penguins could suffer or even die. The problem is that if the water is too warm, the type of fish penguins eat will remain much below in colder water where the penguins can’t reach them and they could starve and die. Fingers crossed the El Nino in December is not as dramatic as expected and that penguins survive. There are only about 800 Galapagos penguins left so it would be a disaster if many of them die.

We got to the airport. There David, Linda, Patrick and I said good-bye to Daniel,  Tatiana, Maria, Cary, Katrina, Chris, Lucy and Raja who were taking the plane that morning. Katrina and Chris were off to Quito then from Quito directly to Amsterdam and then train to their place near Utrecht and back to work. Their next holiday would be a month later a few days in Spain. Tatiana and Daniel were off to Banos, Maria and Cary off to Peru I think for 3 more weeks then off to St Petersburg to meet Maria`s mum who is Russian and then off to France to have a few weeks holidays there too before to head to Newcastle, after the 18 months they had just spent living in Toronto in Canada. Lucy and Raj had one week left of holiday in Ecuador and then off to England for a few weeks then back to New Zealand where they were moving from Napier to Wellington, the city where Raj had grown up and was going to continue his doctor`s studies, including doing more lung and heart open surgery.

We saw them disappear inside the airport.

Our fantastic 8-day cruise was already over. As for Dave,Patrick,Linda and me, we got back into the bus and were really but really happy to stay in the Galapagos islands for one more week. As Patrick said during our bus journey away from the airport, “I would feel so depressed having to leave right now immediately!”. Spot on.

Our second week in the Galapagos was about to start!