Before to continue, let me introduce a very important item part of this cruise, the bell! When it was wake up time, or time to go for lunch or 15 min before to go on the panga, or time to go on the panga,  the guide would ring the bell. That was handy as we did put our watches in the bin and forgot about time. The only issue was sometimes a boat next to us had the same bell. I remember a moment when we heard the bell ring thinking it was lunch time, but that was on the other boat ahah! 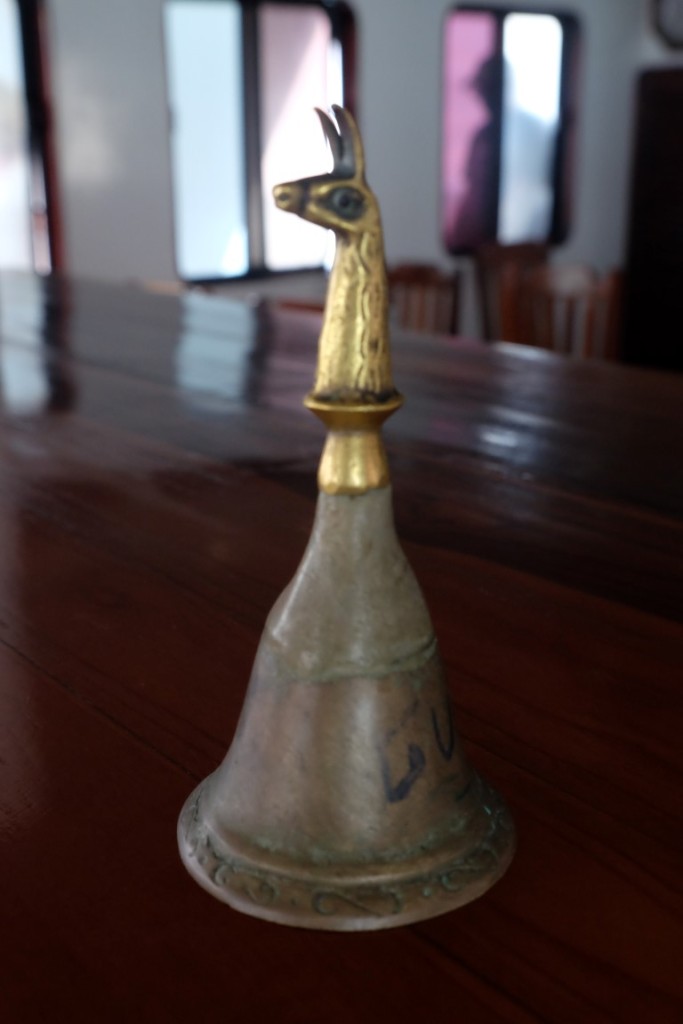 Had a nap of 20 minutes. Then we gathered at 2.15pm in the dinning area. Chris had asked Carlos if we could get a tour of the logistic part, which I was really keen to know more about too. Carlos took us down the boat to show us the inside of the boat. 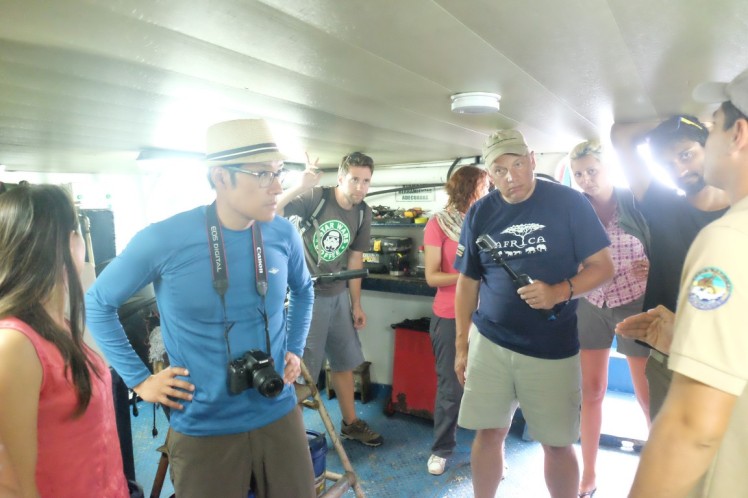 We saw the 2 generators and 2 motors.

We also saw the kitchen where the chef had been cooking awesome meals for us all week. 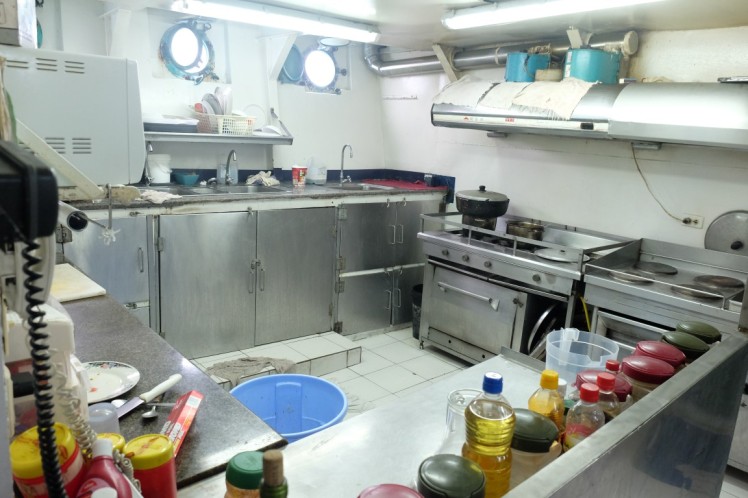 Then at 2.30pm we were in the pangas and got to the Puerta Ayora again. Saw this graffiti of a turtle on one of the walls. 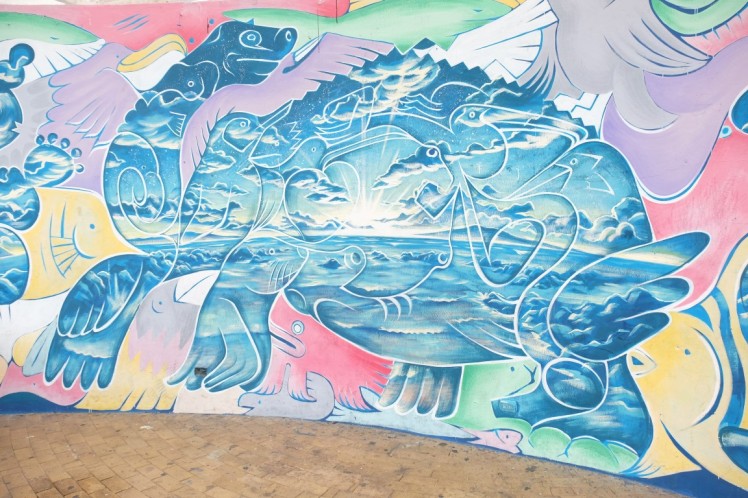 We passed the fish market which is very entertaining as pelicans and sea lions come to have their share! 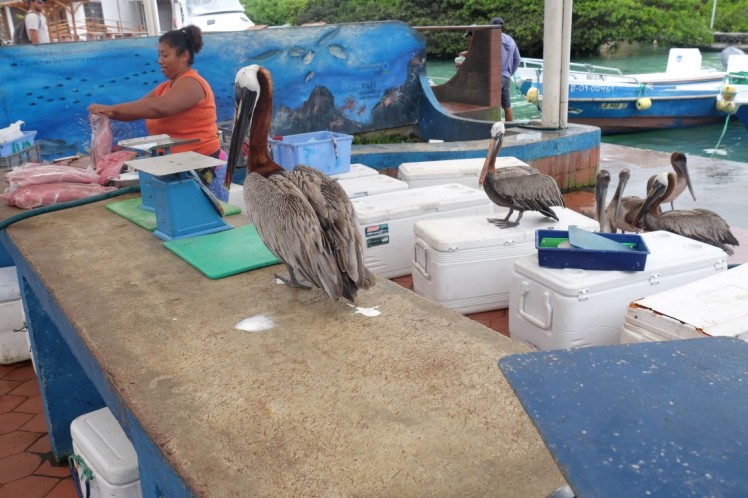 We passed this statue. 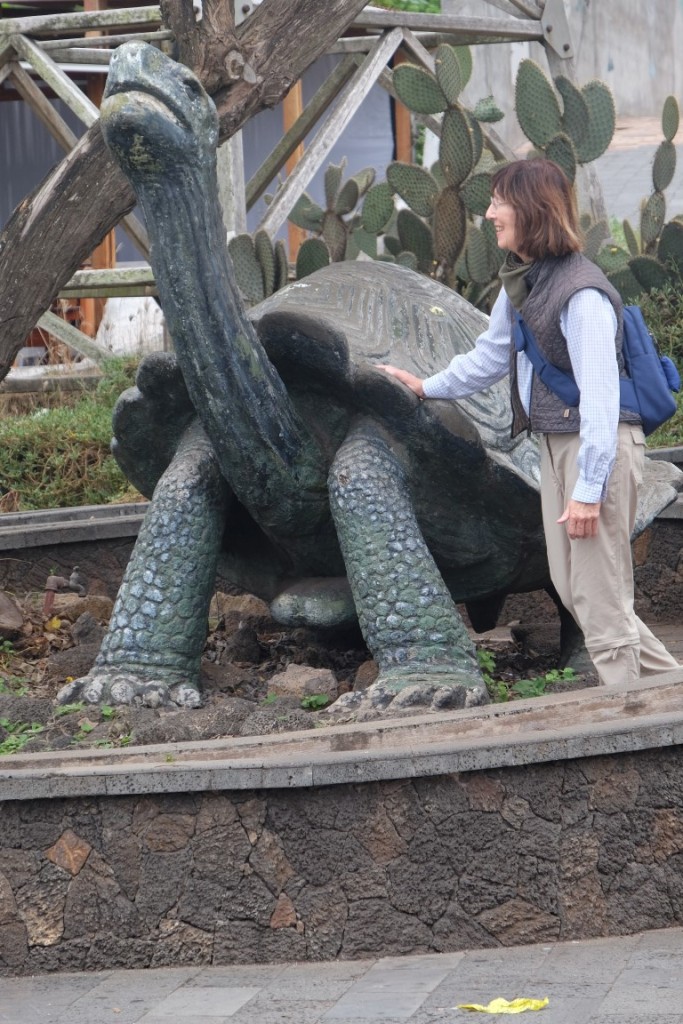 A statue dedicated to all the workers of the tortoise centre we were about to visit.

We met the tortoise Diego who was living before in San Diego zoo and had been brought back to galapagos and mated with 12 females from genovesa island because the 2 other males didnt want to, and taught them to mate with them and is the father of 400,000 tortoises back on the island now, a superhero!!! 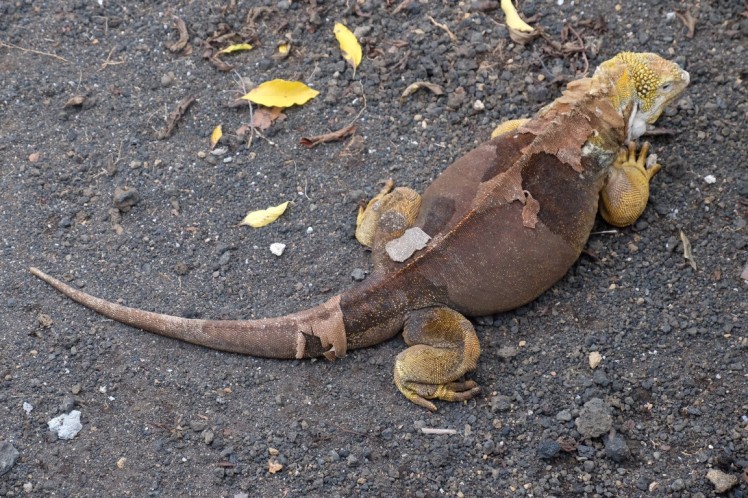 After this short visit to the centre, it was 3.45pm, with Linda and Dave and Patrick we walked around and went to a few dive shops to ask which dives they offered and the details of those dives, where they were going, how long were the dives, which equipment they had, how much the price was, what it included. We didn`t book anything but basically discovered that they all go to the same spots, 3 spots in particular, Daphne and Masquera, Seymour and Gordons Rock and one goes to Floreana island to 2 spots there. So basically three days of diving here would be enough, or 4 days to see those spots. And there are 2 diving spots in San Cristobal island from which we fly out. Something funny when we got in the first dive shop was that when she said we could see garden eels, sea turtles, eagle rays, and sea lions, we were so spoilt after a
week of the cruise that we didn’t care that much. What we wanna see when diving is hammerhead sharks and manta rays! Crazy. One week ago, we would have been very happy to go diving and see that, but since then, we have even played with seals and seen so many and we saw soooo many turtles on one of the snorkle we almost got
bored of them and garden eels are useless anyway. So funny to get so spoiled.

Here is a photo of a diving map we saw in one of the centre. 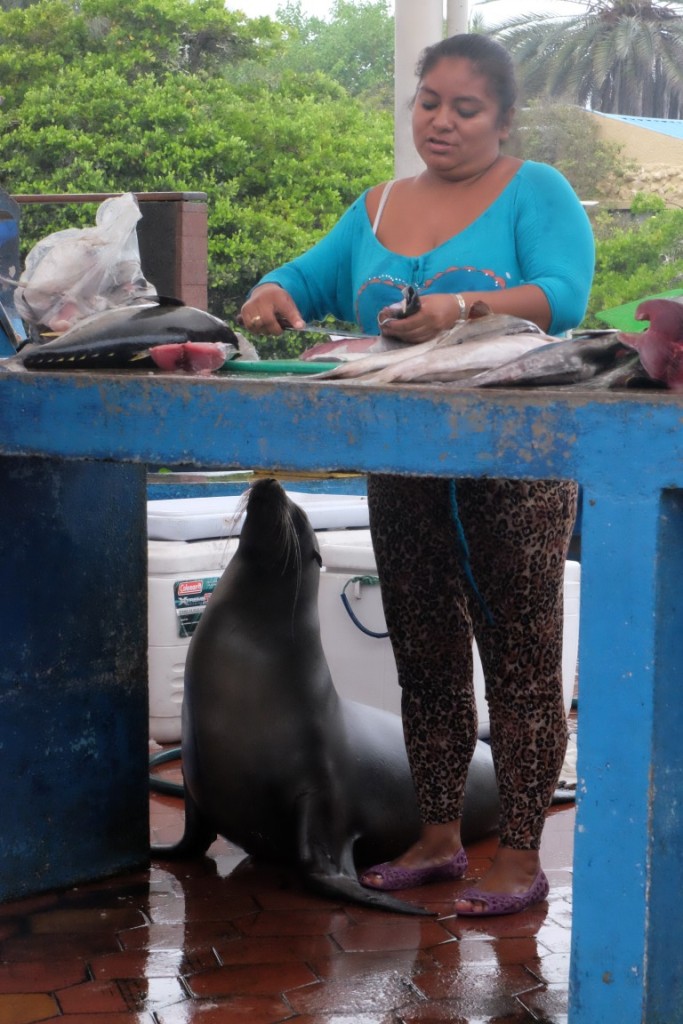 Pelicans and sea lions are spoiled here. Lazy them.

Hey, you have a pelican behind you!

While Patrick, Dave, Linda and me went around to shop for dives, the others were quietly having a drink in a bar!

Another map of the diving spots 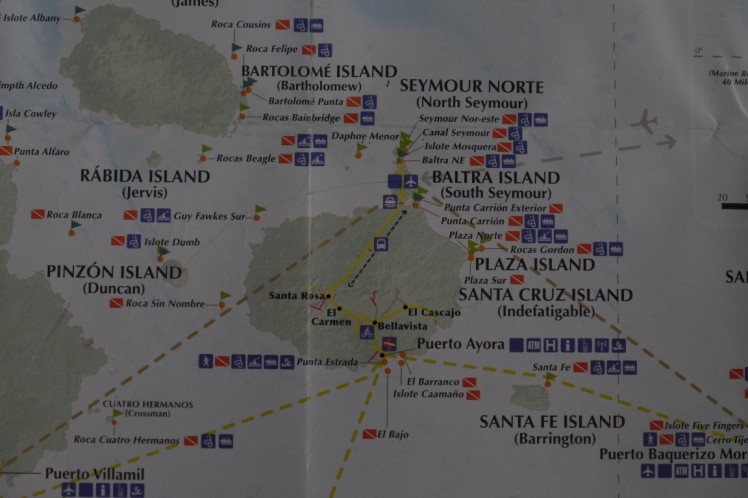 Some other dive shops

A list of the dives available next to Santa Cruz

We also went with Linda and Dave to the hostel where they had booked one night before this trip and booked a twin room there. Then we went for a capirinha and wifi but the wifi didnt work, so we were standing outside of Nauti dive shop using their wifi for the last 10 minutes. Then went back to the boat for a last night on it. View of the harbour from our boat. So many boats around!!!

This day was not as great as the previous days. Seing the giant tortoises was great, but the afternoon was not that good. The thing is for people flying back tomorrow, this last afternoon on land shopping and buying souvenirs may be great but as we still have a week on land, for us it was a bit of a waste of a day. On the boat, we chilled until 7pm, had our last awesome dinner.

Last awesome desert. I was thinking that the chef could make a “San Jose Cooking Book” with all the recipes of what he had cooked for us all week, I would have bought it!!! Signed copy of course! 🙂 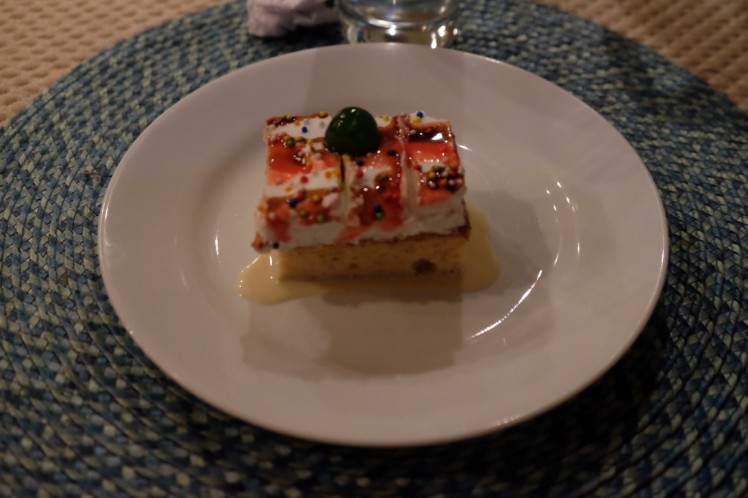 After that, we packed the bags. Then we had a beer upstairs with Kerry and Maria, and Lucy and Raj, and Daniel and Tatiana and David and Linda. The 10 of us played a game called 30 and then a game they call Spoon that in France we call Paquet de merde and in Switzerland Tas de merde.

Then we packed the bags a bit more and wrote or read. The bay is not really quiet. Really noisy with boats all around us.

The boat keeps moving, not as quiet as when we were anchored alone in one of the bay. Too much movement of the waves created by all the other boats. And there are mosquitoes around and it is warmer than before. We opened the door to let fresh air enter but it is really noisy. So far we realise we had a great week compared to this!! Voila dodo now.