Started walking. I remember how everyone had their hat on because it was pretty cold that morning.

The landscape that day was the most stunning we saw during the trek, we kept taking photo after photo. When I went through the photos to select a few, I had about 100 times the same one with a slightly different angle, ahahaha! 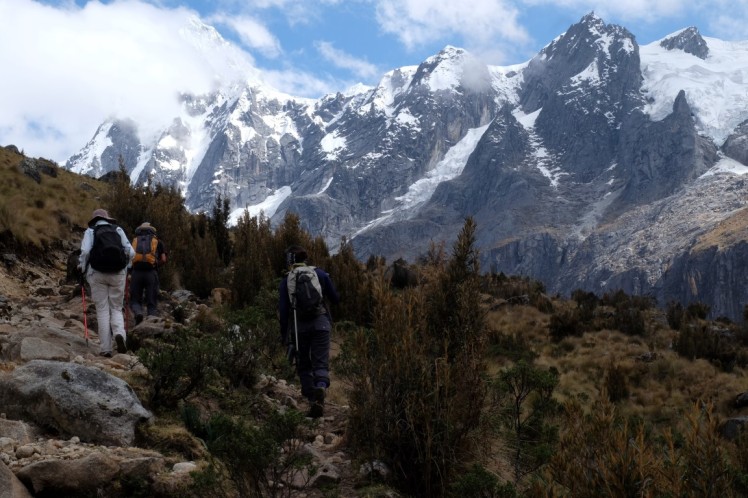 Our donkeys catching up with us pretty quickly.

And soon already in front of us. The arriero and his assistant are very fit! We are about 4,200-4,300 metres high.

Hey, hey, for once, I am the one in front of everyone!!! Youhouuuu!!! Doesn`t happen that often. Alright, I think it only happened at that moment actually. Ahah.

This is Rebecca going for a toilet stop in the most scenic toilet of the world, behind the rock. 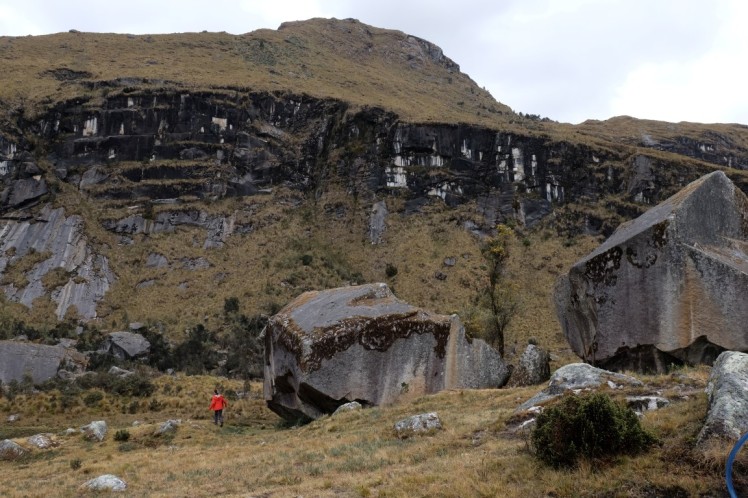 Arti the guide and Lucho the dog, posing. 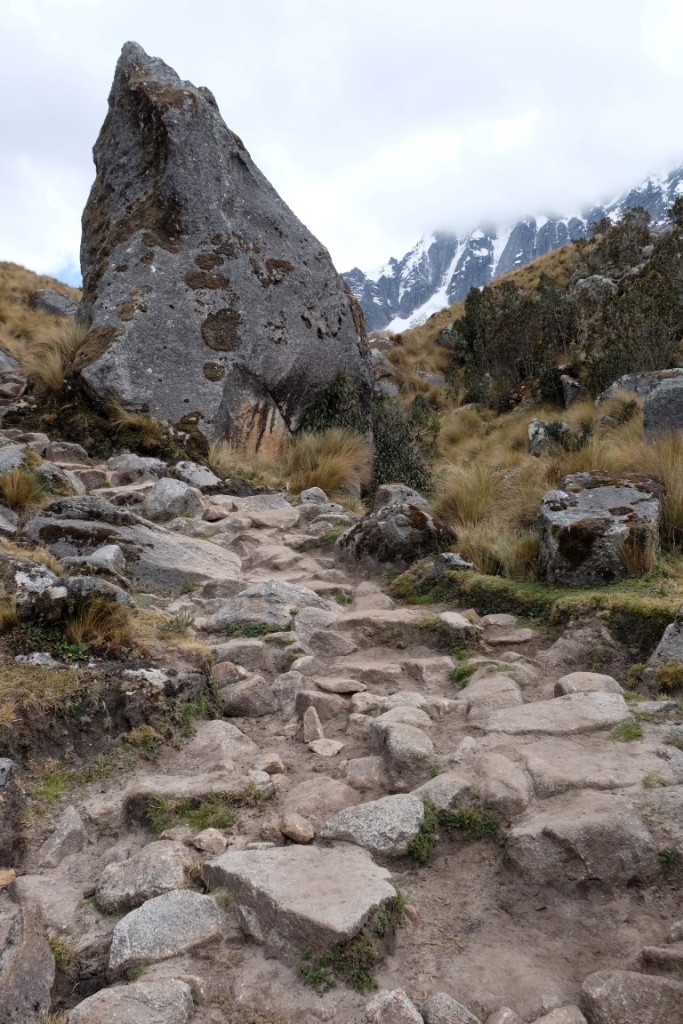 Alright, now, if you happen to not know Obelix, Asterix and Idefix (known as Dogmatix in English but I prefer the French name because Idee fixe means Fixed idea, that`s because this dog just wants bones, that`s his main focus kind of), let me present them to you as they were a very big part of childhood in France!

Invented by Goscinny and Uderzo in 1959, those invicible Gaulois always defeat the Romans (They are crazy those Romans!) trying to invade the Gaule. Yep. Because the druid of the village, Getafix (known as Panoramix in French but you know what that time the English name Getafix is so much more appropriate and witty!!) has an awesome magic potion. But Obelix fell in the cauldron of magic potion when he was young and he is not allowed to have any. And he is not fat by the way. Just a bit wrapped. More info about Obelix here. https://en.wikipedia.org/wiki/Obelix

Juanitette climbing on a rock to enjoy the landscape. 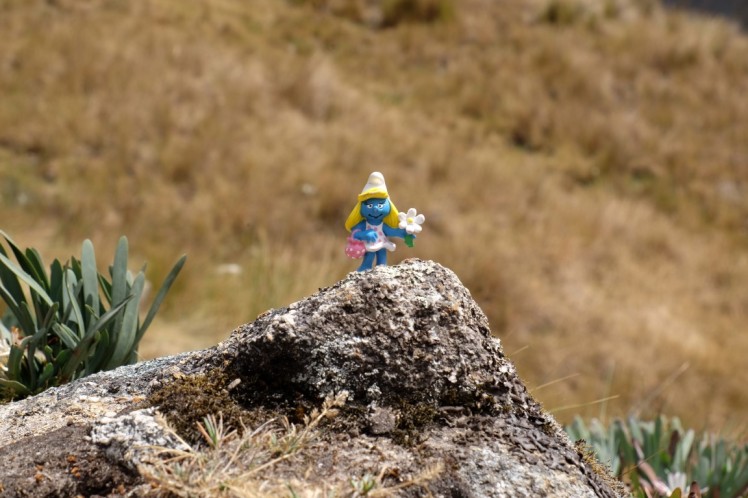 Oh look, I found an even bigger flower!!! Can I take it? Oh yeah right, we are in altitude girl, who is going to carry such a big flower, you maybe? Ok, ok then, I keep my small one.

I love how the snow layers were setup on the mountain. 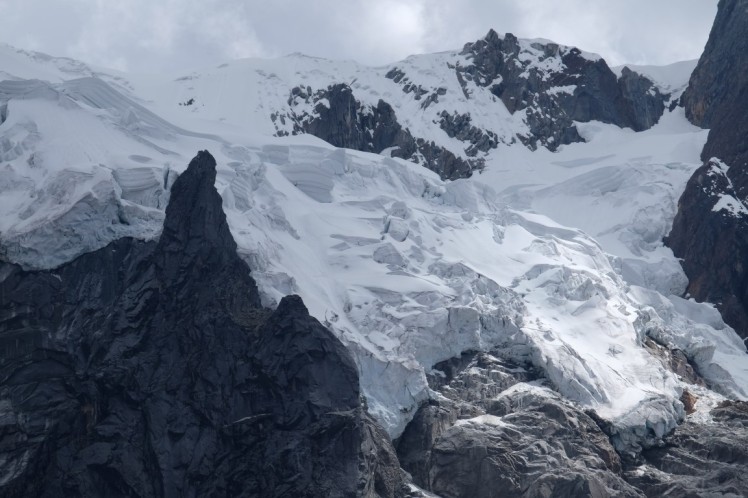 That range of mountains was really pretty.

Close-up on another summit. We were all waiting for the clouds to clear up to unreveal the one hidding on the left.

Not sure who Emmie and Greg are, but I thought this stone love art was super cute. 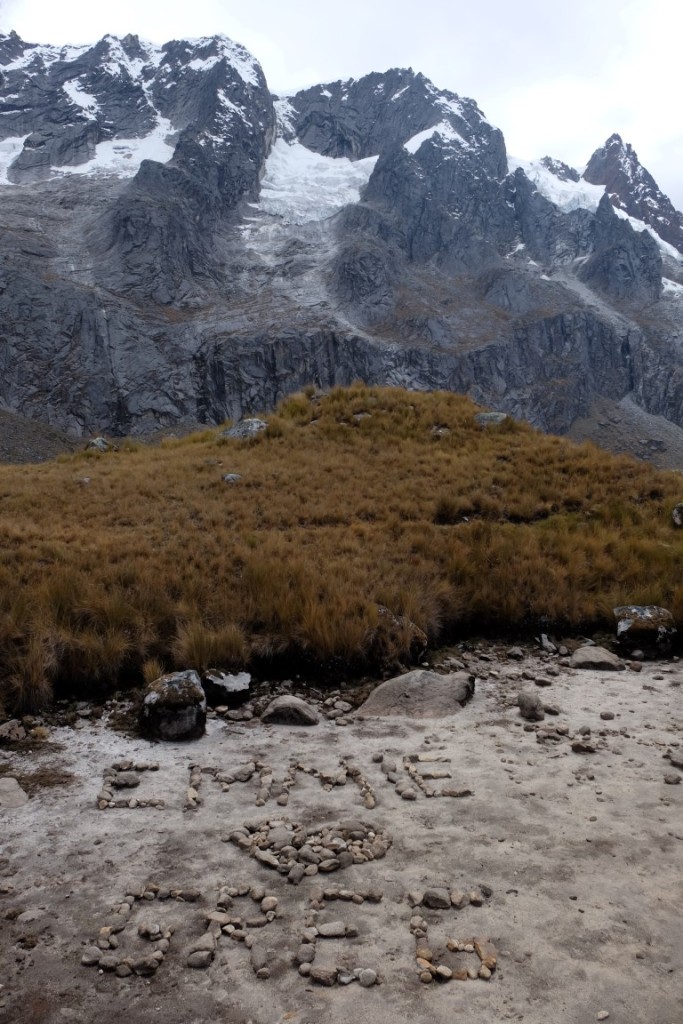 We stopped for a snack break contemplating the awesome view around. 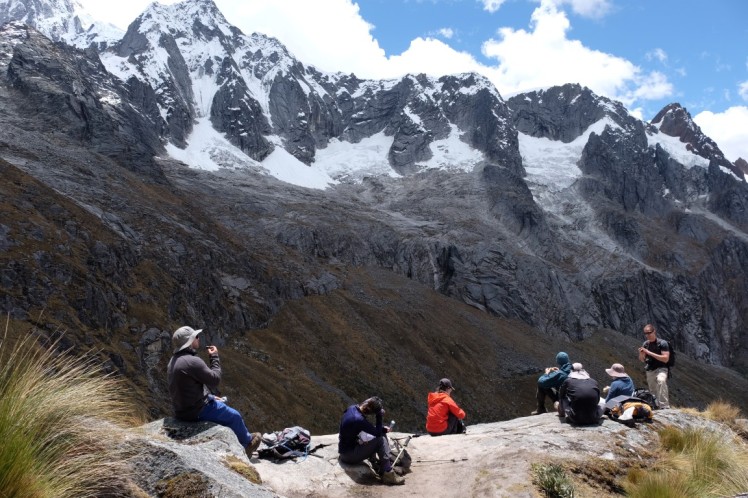 It was a bit windy and Lucho found a perfect spot where to hide from the wind, witty doggy.

In front of us, the blue lake. 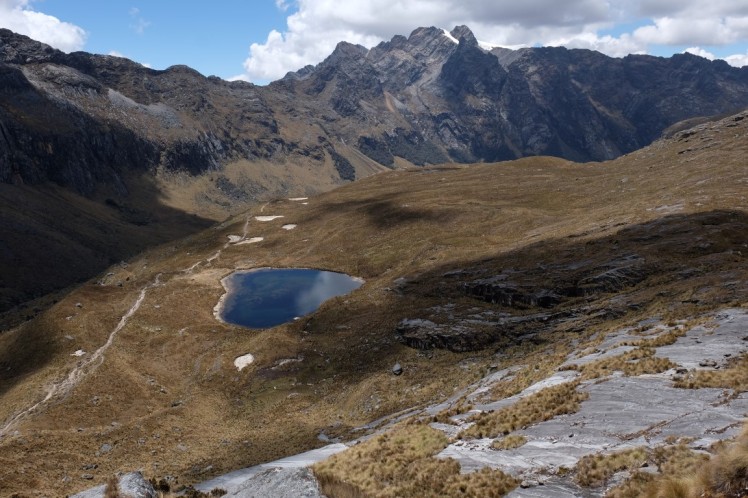 On our left, the snow peak which was hidden by clouds finally revealed himself, splendid! 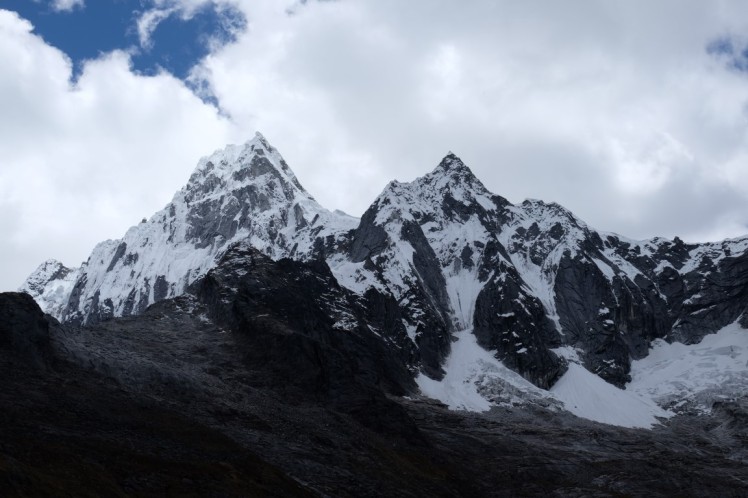 View from what is ahead of us. See this little V at the top, that`s the Punta Point pass at 4,750 meters high that we are heading too, the highest pass on this hike.

This is Rebecca and the massive mountain in the background. It is actually one of my favourite shot, I just love the scale of things here, quite proportionate, how small we are in front of those gigantesque mountains which really win our respect and awe and admiration.

I ran into this German couple, hiking self-sufficiently, in a clockwise way. I was admirative and wish I was experienced and confident enough to do the same, although having another hiking buddy makes it way more easy than adventuring alone in altitude, unless you have the experience like the awesome Australian hiker Cameron I met in El Cocuy who has thehikinglife.com blog. It was pretty cool to see also the size of their bag, they really packed light.

And off we continued, see the V over there, getting there, getting there. Some were already at the top. Actually, I didn`t feel it as hard as the Passo del Cussiri in El Cocuy, the one on the first day that I didn`t even reach. It didn`t feel as hard either as going to 4,818 meters at the beginning of the snow of Pan de Azucar and Pulpito del Diablo. Probably because it was less windy and less cold and also we had already 2 days of acclimatisation in 4,200-4,500 meters so maybe that`s why it felt very fine. I would have loved to have another pass at 5,000 something to see how I would deal with that. Just curious of it. One day.

View from the top of where we come from, we could really see all the lakes now at the bottom that we had passed.

And behind that pass was the magical view of this valley in which we were about to walk. I love how a mountain hides something and once you reach the top, you have this expensive view of what was hidden, a gem. 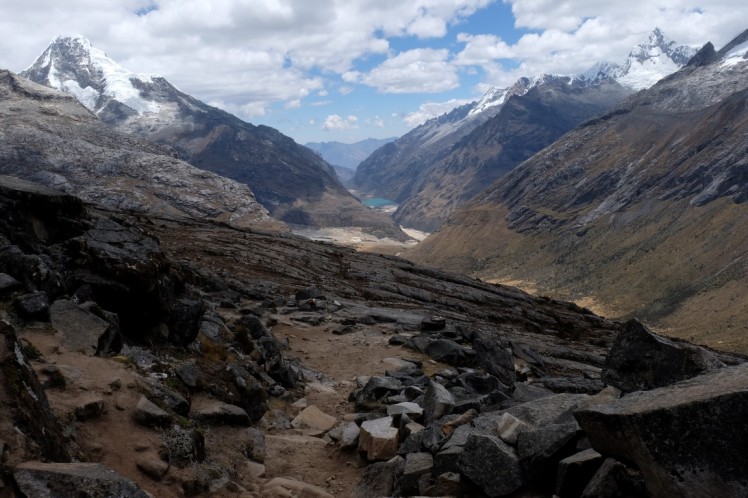 To celebrate, we asked a passing hiker to take that shot of all of us. We made it to the top, Punta Union, 4,750 meters high, yeah! We tried to get Lucho in the picture, we even were enticing him with chocolate bars but he kept running away. First row, Arti the guide, Matt, me. Second row, Adrian, Mary, Rachel, Matt and Rebecca.

Alright guys, just leave me there, I feel like contemplating this 360 degrees view forever!!!! 😀

I think Adrian and Lucho agreed. They could contemplate the valley waiting for us forever too.

But hunger always gets us, hey. Arti and the cook prepared a nice salad for us for lunch. It`s like if we had Aladdin`s lamp and could just make a wish. “I wish that suddenly food materialises in front of me right now.” Diiiiiinnnng. Done. So awesome, no?

After lunch, down we went on this path. 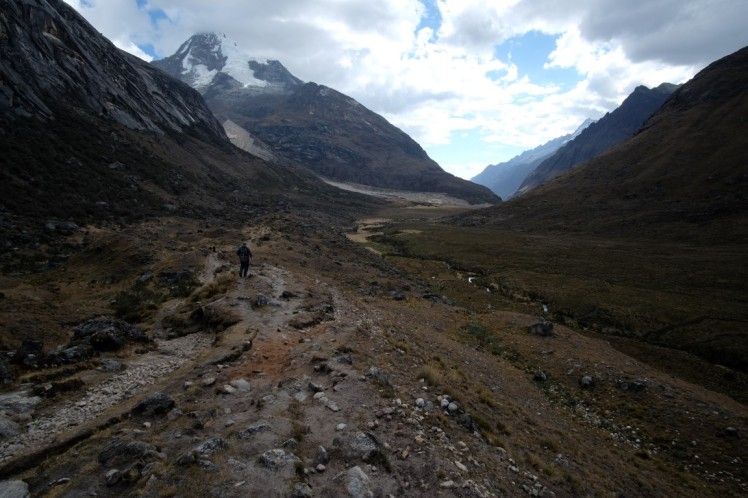 We reached the campground of Taullipampa. 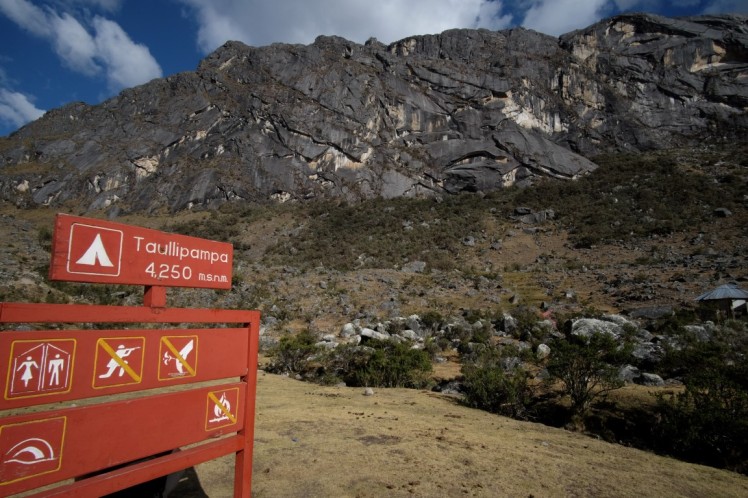 Pretty landscape all around. What an incredible day we had! 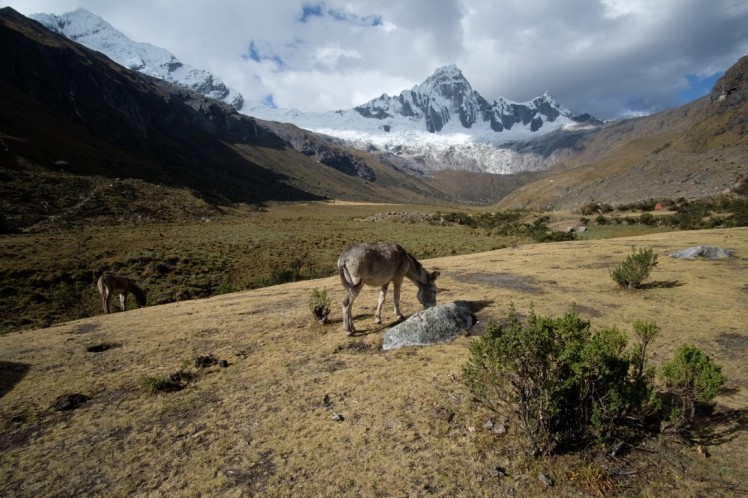 The most important person of the trek…the cook!!! 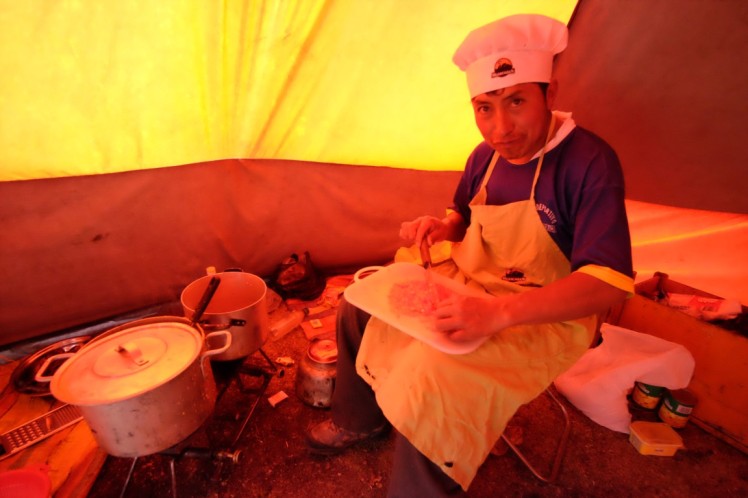 That evening, we were served on top of amazing food with an awesome sunset. It started like this.

Continued like that, with orange and yellowish colour variations. 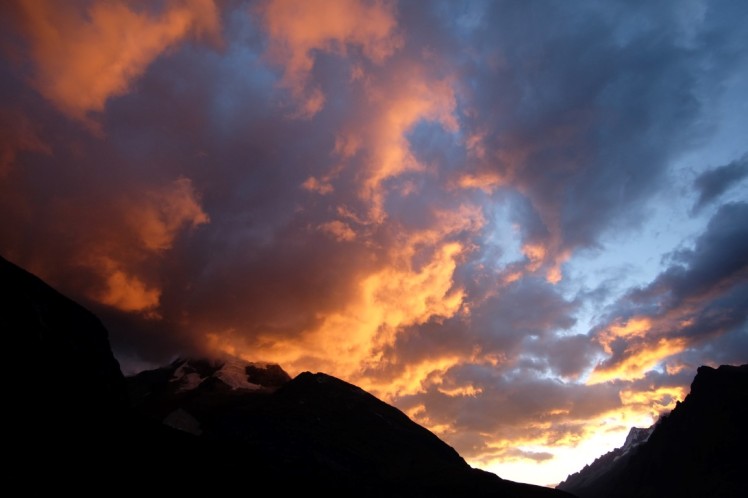 Finished by getting pink, then later the pink faded and got grey.

That`s how it looked from my tent. 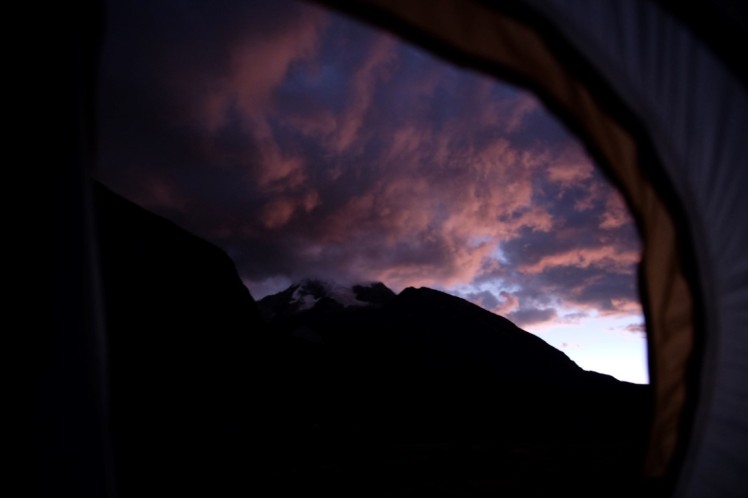 But wait, nature didn`t only offer us that!!! It put a show for us of a moonset of the new moon rolling on the hill. 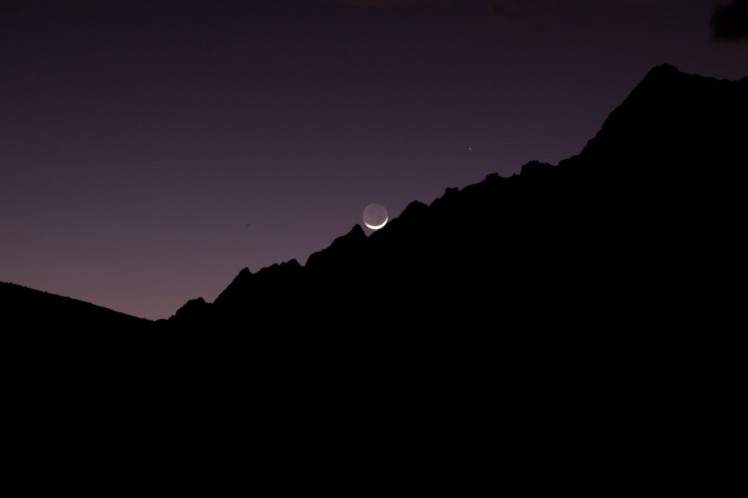 It sinked in slowly. 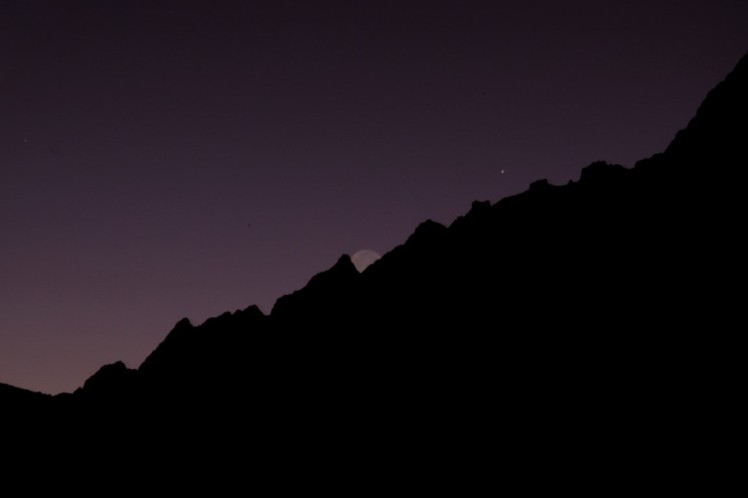 To the point of having just one little bit appearing above the mountain. So cute. Thank you Nature. 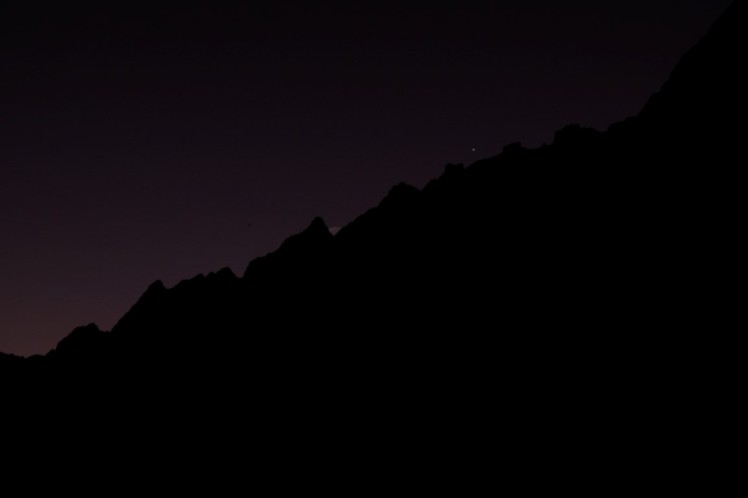 We had awesome spaghetti bolognese that evening. What I really loved on that trek is that we had awesome quality food and were never starving and the cook made a great effort to cook delicious meals. When hiking, I learned in Colombia with my own disaster stove mistake how much good warm food is super super important and even essential to stay in good mood but also feel fit and energised to keep walking. So nice meals! 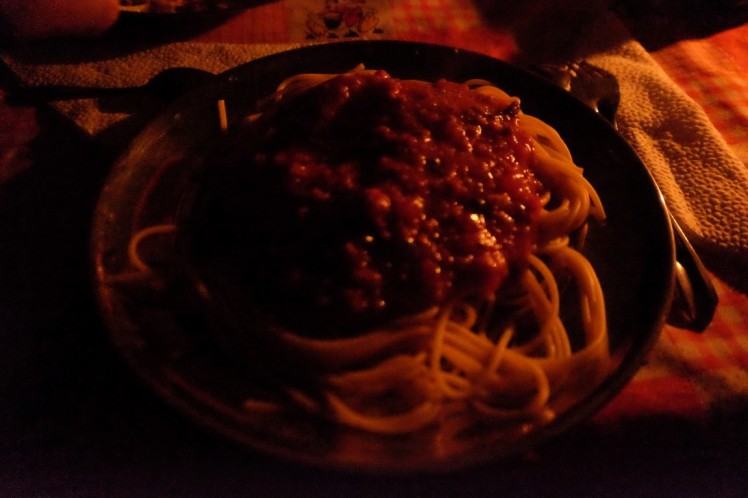 In the evening, did more night shot photography. Matt was a passionate photographer too and his Canon D5 Mark II with a 16-35mm was still just enough light to fit on the gorillapod too so we took turns taking night shots of the sky and exploring aperture, ISO, speed and composition to try to get something nice. The thing when doing night shots is that you have to kind of guess about the framing because there is no way to see what you are shooting exactly, so you just keep your fingers crossed that something good will come out. It was awesome for me to shoot with someone else, it makes it way more fun than when you shoot on your own. That evening the sky was really clear. The milky way was stunning!

Long-exposure shot, 1000 seconds. I let you calculate how many minutes that is. ;-p
Alright, Daddy, as I know you are reading this, you know now why you HAVE TO buy a gorillapod suited for the D700 for when you come in a week to Chile, so that when we are in Atacama Desert you can also take those photos too. Right?? 🙂