View from my tent in the morning

The valley was half-wake, half-asleep 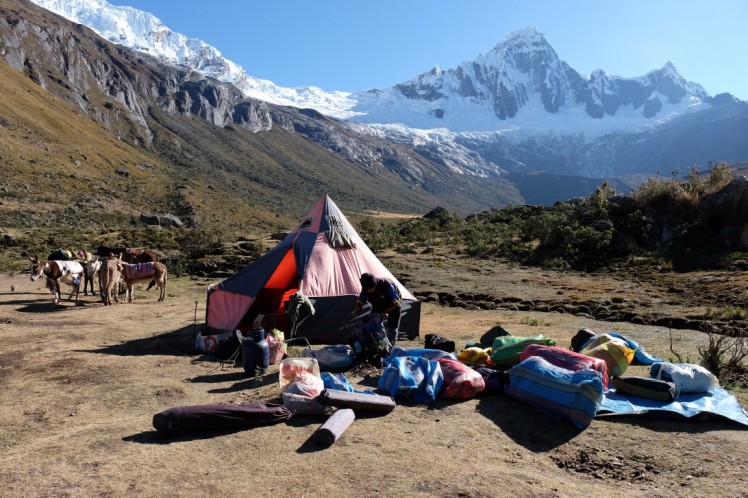 Snack bag for the day, yeah

View to our left.

View in front of us. See the lake over there, that`s where we will  be heading in the afternoon, but first we are going right to the Apamayo Basecamp. 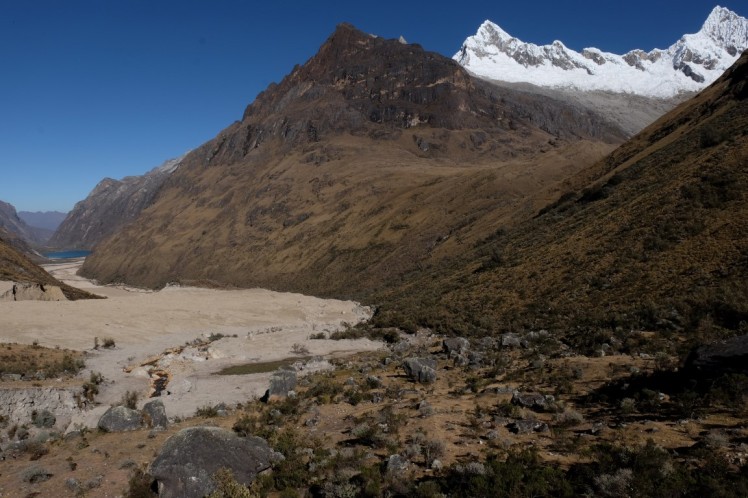 Up we walk, to the right.

The view behind us

We all stop at a rock and climb on it to pose. Hey, I do look a bit like Smurfette, don`t I? 🙂

Heading to Apamayo, the mountain you can see in the background, so pretty! I remember having a really cool conversation with Rebecca during that morning walk. Those kind of conversations you can only have when walking at length, doing nothing else. We were talking about love, weddings, life, death, meaning of life, all these topics at once, it was pretty cool. The day before, now that I remember, I was chatting a lot with Rachel on similar topics. Hiking has this particularity that you just focus on walking and if you have a great group of people, then you also chat a lot in depth, it is cool! 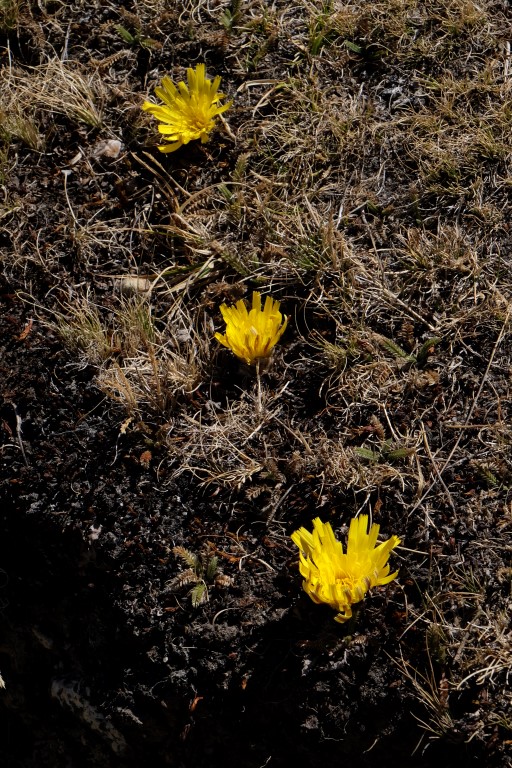 We stop near Apamayo basecamp to have some snacks. 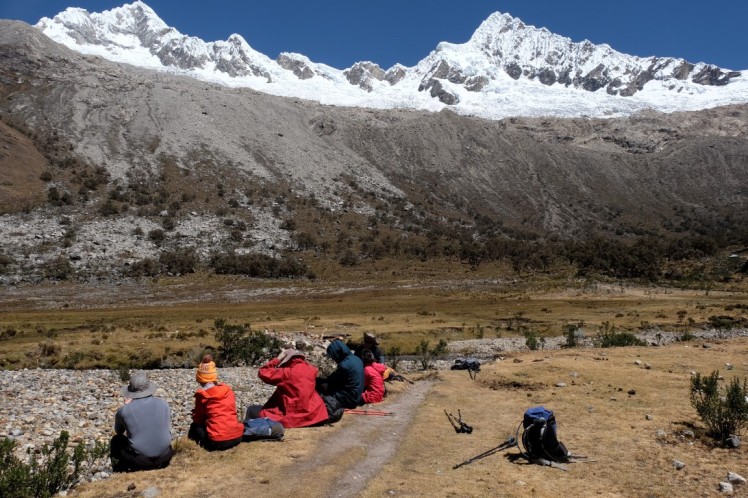 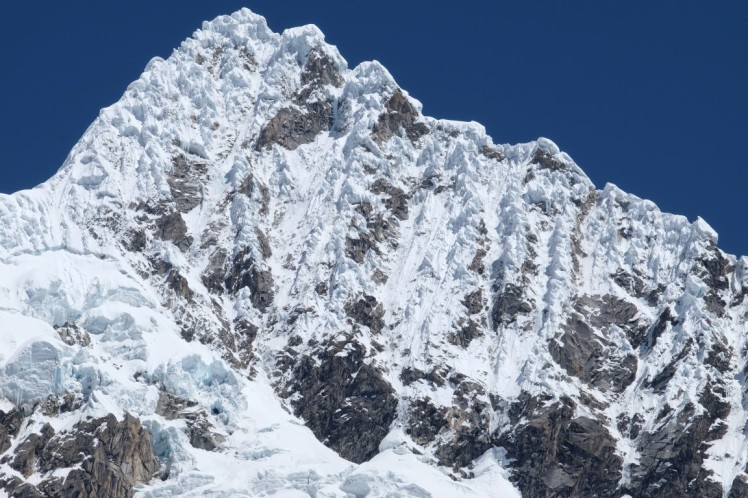 On the way back, guess what Lucho and his new friend who had just joined us in the morning did? They chased those birds we can see here, totally nuts, running like chicken! Ok running like dogs! 🙂

Walking back to the main path as we were on a small alternative path to Apamayo basecamp only. That mountain pick over there was sooooo pretty! 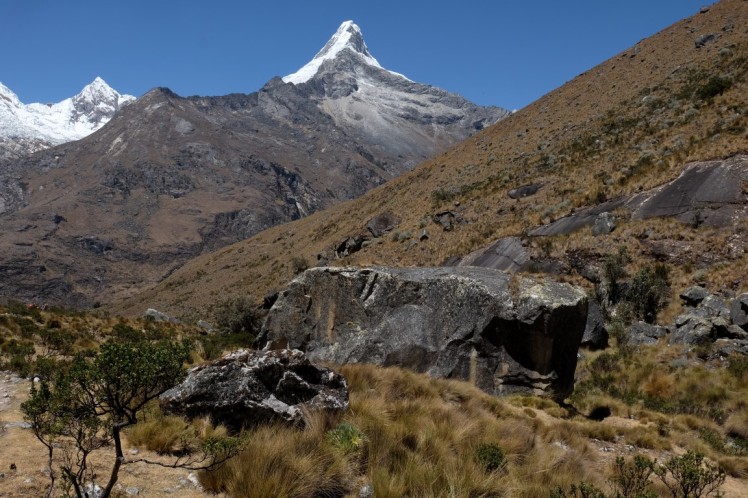 Here Matt saw an elephant, I agree, spot on. 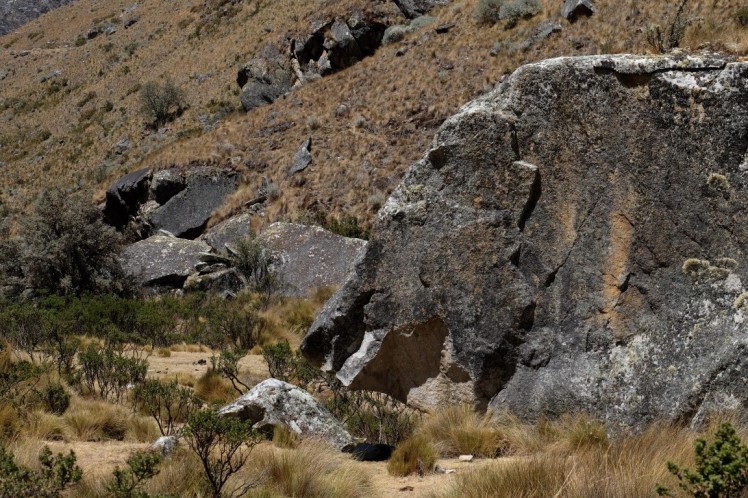 This jaw of a cow was on the path and Lucho tried to chew it, what a nice bone hey.

We reached the main path again and started going down towards the desert. 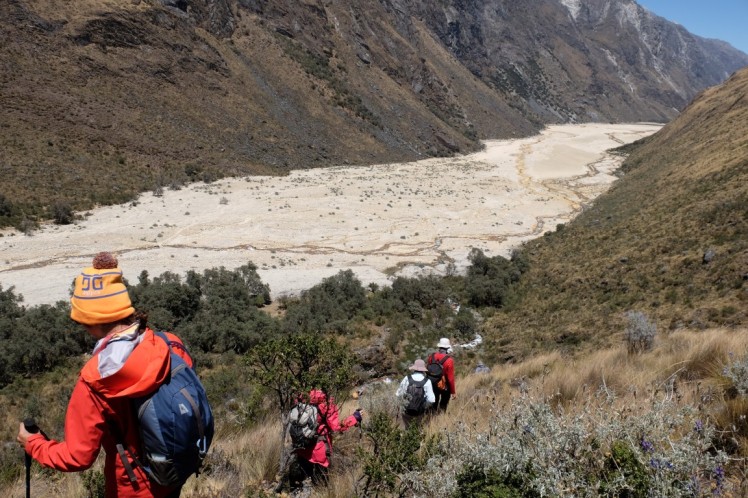 Before to cross the desert, we stopped for lunch. Aladdin was creating his magic answering our wishes again. 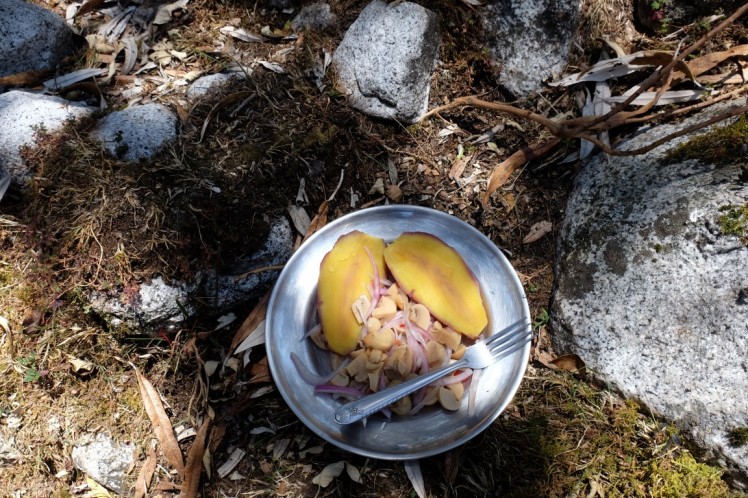 Another cow, mmm, should I go chase it??? 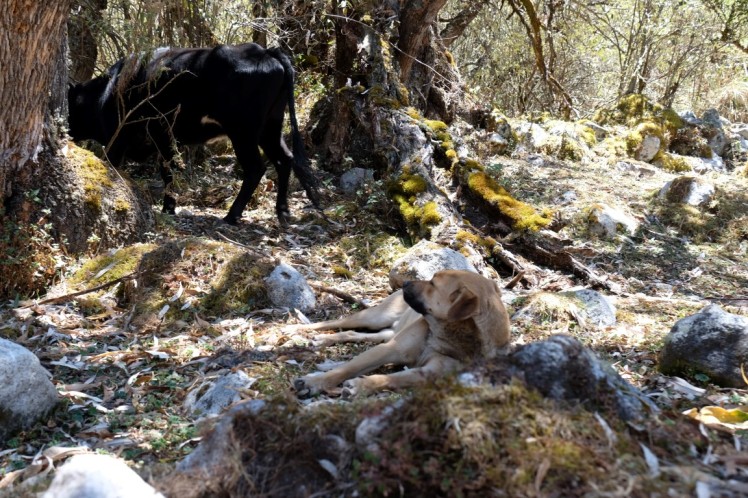 Naaaa, can`t bother. It is siesta time. Will go bite the legs of the next one I find. There will always be cows waiting for me.

After lunch, off we went to cross the desert. It was hot, and I was so glad to have hat and sunglasses. Kept putting suncream again and again!! 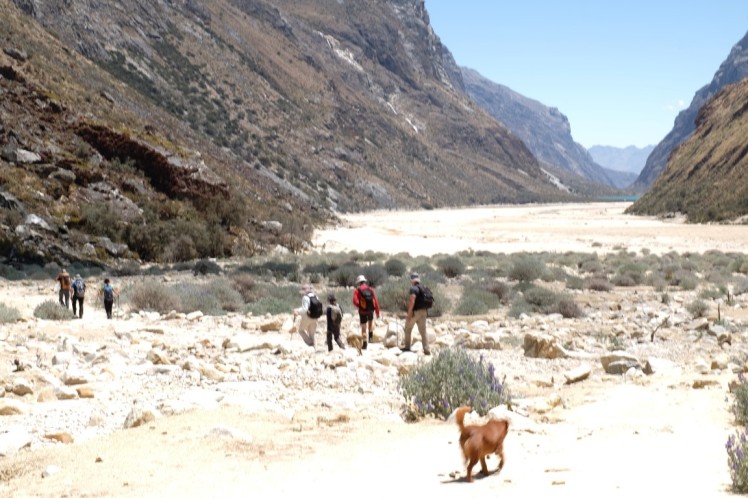 The path behind us from which we come from 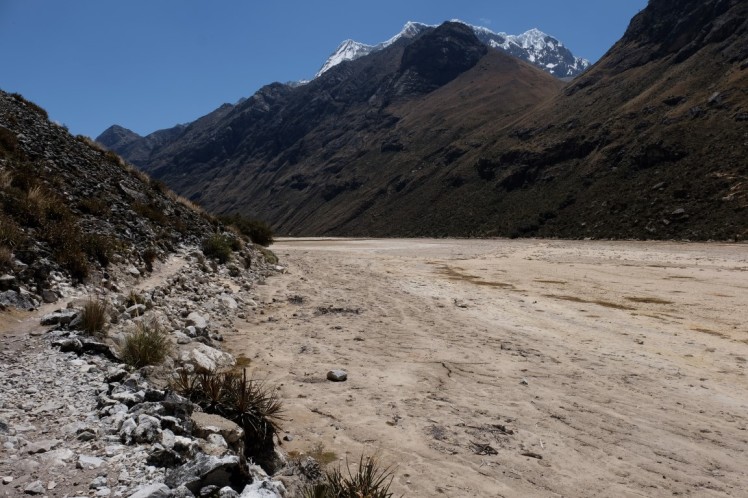 Waterfall on our right

Chatine our second dog, who joined the trek this morning. Can you imagine if we were on a 10-day trek and had a dog joining every day? That would create a wolf pack hey!!! Get the full moon and we are sorted. Poor cows, they would suffer! 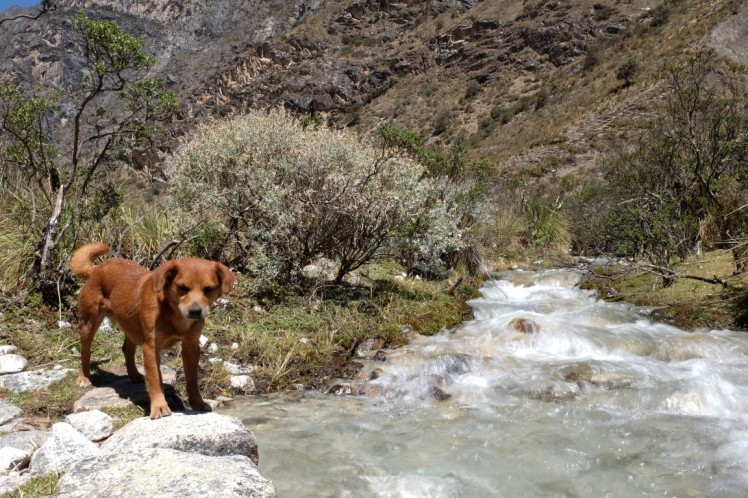 We finally reached the lake that we had seen from higher up in the morning at the beginning of our walk. Now, what is amazing with this picture is to have desert, lake and snow at once!!! Pretty unique, no?? Alright, at that stage, I admitted that Santa Cruz trek could be as beautiful as El Cocuy. It does have a huge diversity of landscape, it is very pretty. I am still in love with the frailejones of El Cocuy which are missing here and the horse ride I did in the forbidden sacred valley remains really THE “whowwww!!!” day of my trip so far, when it comes to landscape`s beauty. But hey, ok, Santa Cruz is really an awesome trek, equally beautiful, in a different way. Agreed.

How the hell did that stone manage to break like this? 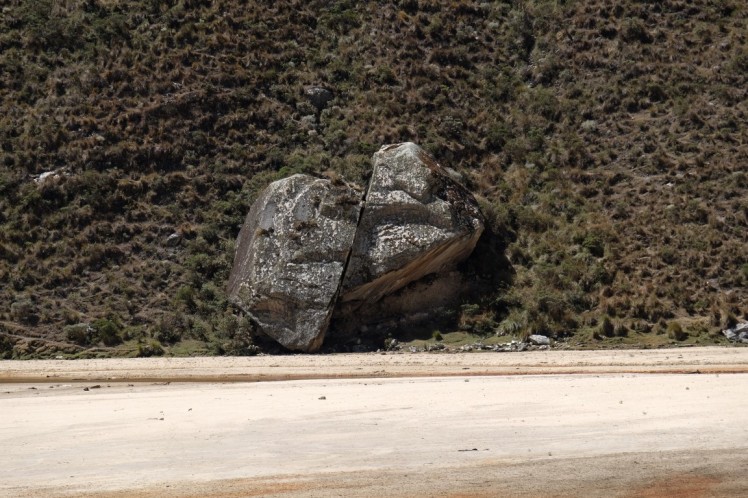 The lake had a really awesome colour but those sand formations thingy in the middle, what the hell is that?

And we kept walking, with the lake on the right, which turned to be bigger than I thought.

This photo strongly reminds me of the Calanques of Cassis in the South of France where I went swimming with my friend Solene when she used to study in Marseilles. 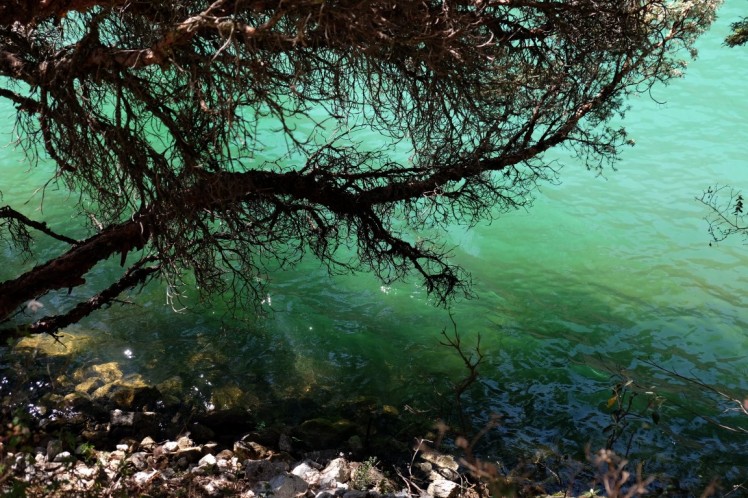 After the lake, we walked alongside this river.

Walking through a valley.

Those donkeys were soooo cute. The baby one came to see me and I was petting it forever. Usually you walk towards a horse and you hope it will stay there and let you pet him. But how often do donkeys or horses come to you themselves, just curious, with no fear, to check you out and get petted? It never happened to me before. It was such a magical moment. I could have stayed there petting him forever, what a cute donkey. I have a very funny video of the two of them a bit later on. Once I figure out how to put up videos, will share here!

Now, this mummy cow and child cow, how funny it was to watch them kick Lucho and Chatine who kept annoying them! 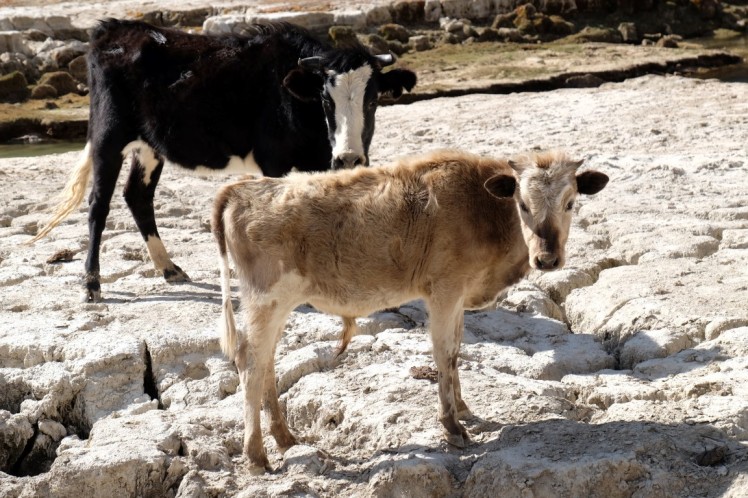 Here is the funny video of that moment!

Kept walking in the valley towards the campground.

And here we are!! See that rock top left corner. It was calling me and that call was really hard to resist, so after pitching the tent, I went to sit on top of it to enjoy the view from there. 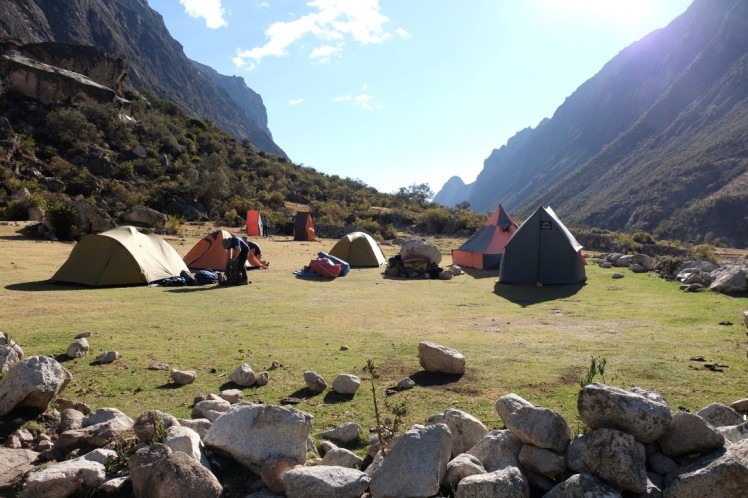 When looking back the way we came, what a stunning view.

A guy with lots of donkeys passed by. I love how the donkey`s shadows but also the stone shadows are stretched. 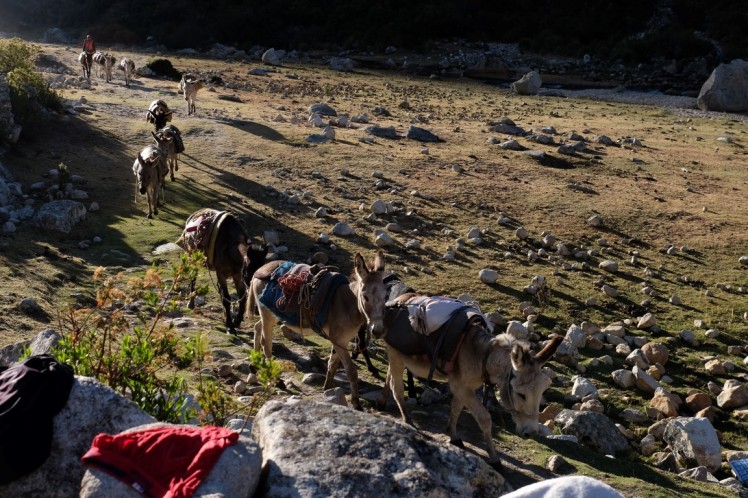 Sun setting behind the mountains.

My tent and the valley. Pretty cool spot to pitch a tent hey?

And here is the gorgeous view I had from my rock. It was an incredible feeling to be there, higher up, soaking in so incredible surroundings. I had the “Society” song in my head of “Into The Wild”. I just sat down there, lying against the rock, lost in deep contemplation, happy. Those true happiness moments…until the bloody mosquitoes started to bite!! Ma euh! 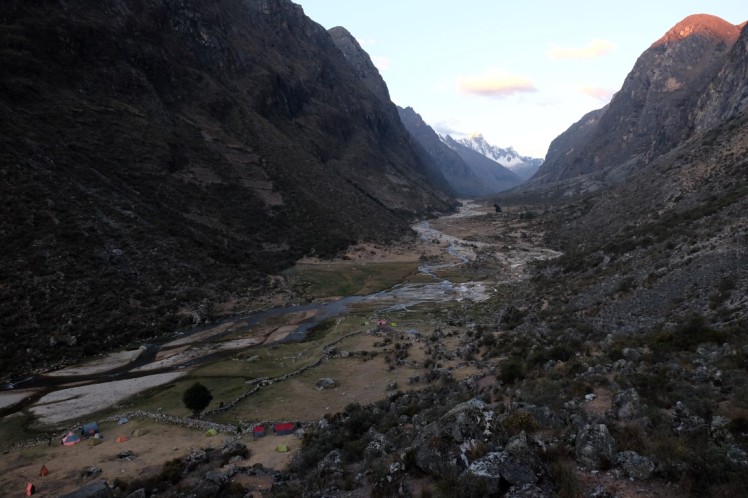 View to the left

Zoom on the mountain on the right. 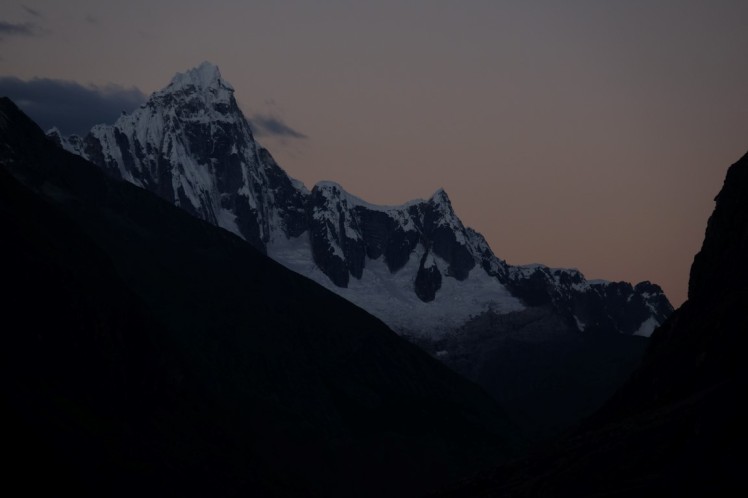 Zoom on our camp, so funny to see it from higher up. Can you spot Lucho in the bottom right corner looking in my direction? He kept barking and barking and barking. He didn`t really like it that I was up there without him it seemed. So cutty dog!!

I really love that moment of dusk where the shapes of the mountain get so sharp, contrasting with the blue of the sky.

And the new timid moon appeared. 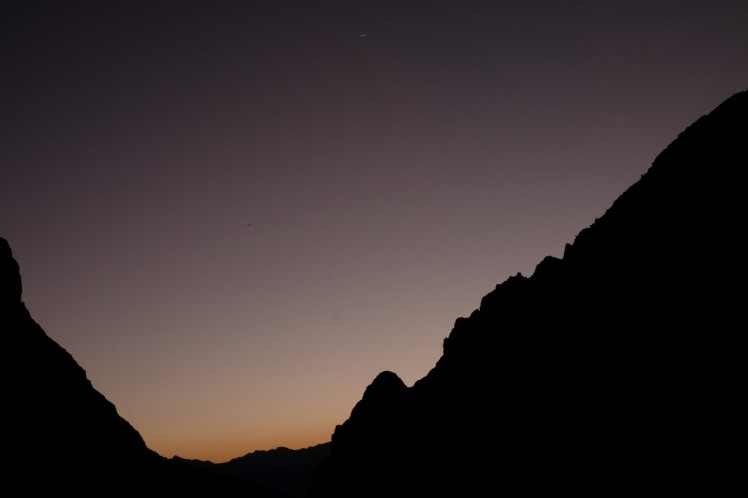 Such a pretty moon.

I really loved how we could still see the sunset colours while the first stars were appearing in the sky. 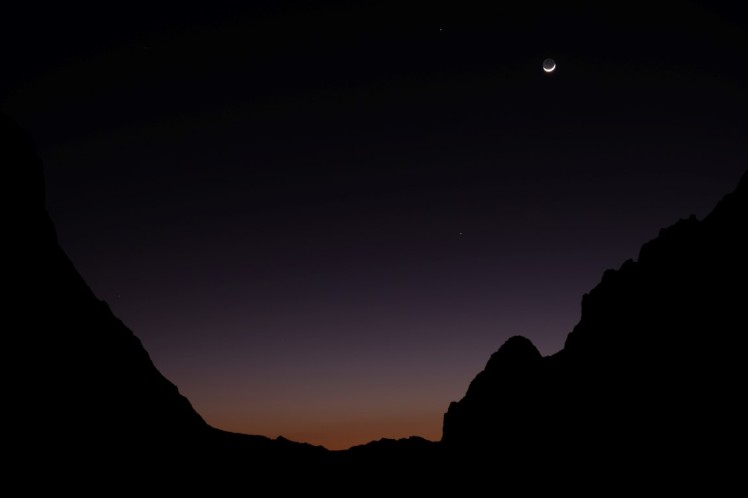 That evening, Arti brought to each of us a glass of mulled wine which was so nice. He made a speech and said thank you for having chosen Huascaran and the cook, the arriero and his assistant also thanked us for that. I jumped in and thanked them in Spanish on behalf of our group. I mean, yes we paid for the trek, but we all agree I think, they did an awesome job cooking for us and setting up the camp and providing us great food every day on time in a beautiful dinner tent. It was a super high quality trek!

And off we went after dinner with Matt for some night photography. I have no idea how I got that shot, but I find it pretty cool! 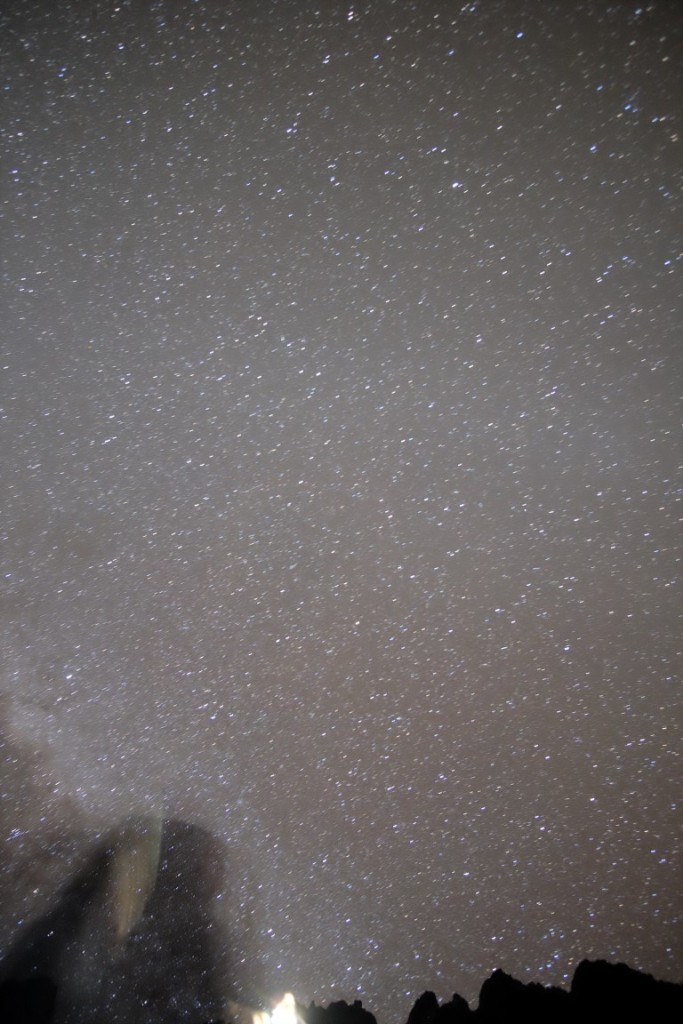 Night shot above other mountains 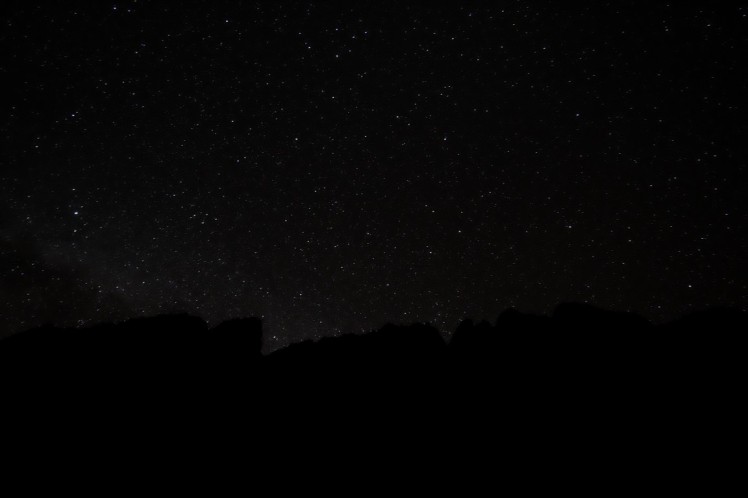 Now something I could not capture here was how the mountain shapes made an oval which created a beautiful oval sky of stars that not many lenses can capture in one shot, and it is hard to do a panoramic when the stars keep moving and you already need a long exposure to get them. But that oval sky was really pretty to watch!! Not many shooting stars those nights but still a few though.