We woke up at 5am and at 6.20am we were in the boat, ready to leave the jungle place and go back to the lodge. Here is Fernand on the canoe with all the bags going below the big trunk next to which our campsite was. 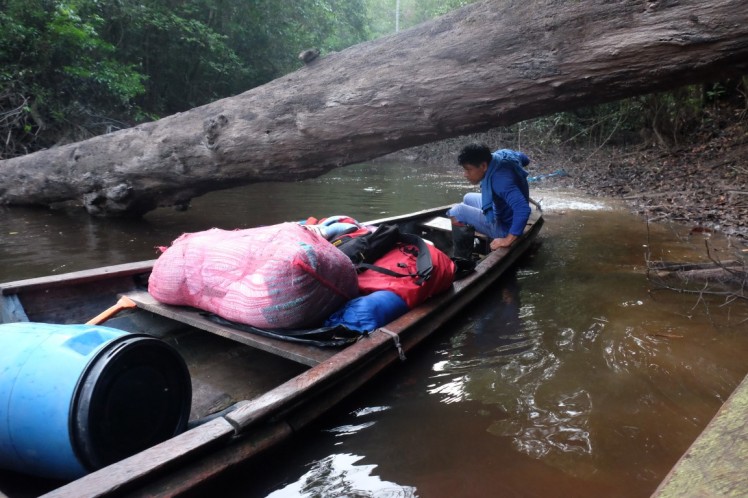 During our 4-hour journey back (a bit shorter as we were going downstream this time so the current helped to go faster), we ran again into lots of trunks like this one under which we had to bend our heads, sometimes go down as low as we could in the canoe in order for it to pass under them. Fun! 🙂

We saw those two birds at some point, same ones as the sad one who had got entangled in the net.

The river and the scenery ahead of us

A nest at the top of some branches 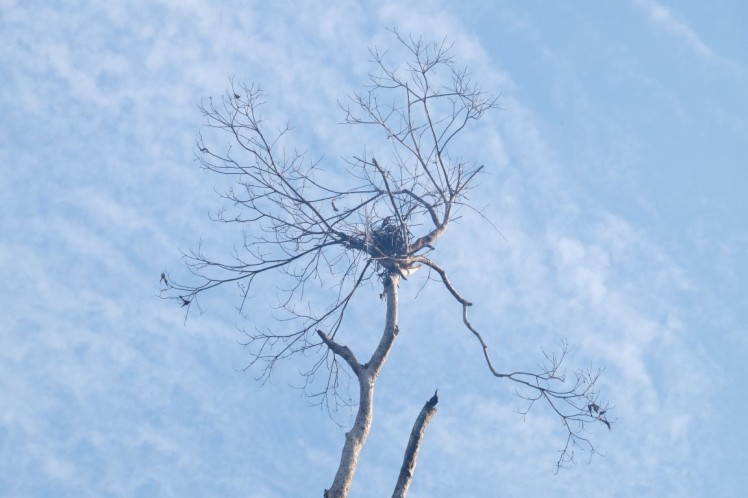 Passing under some more branches

An hawk flying away

That spot where the other boat got stuck, our canoe going under that big branch again

Before we knew it, the 4 hours ride was gone already and we were back at the Delfin Lodge. Fernand grabbed everyone`s bags to bring up to the lodge and we left straight to go to a village nearby where they had a sloth as a pet. 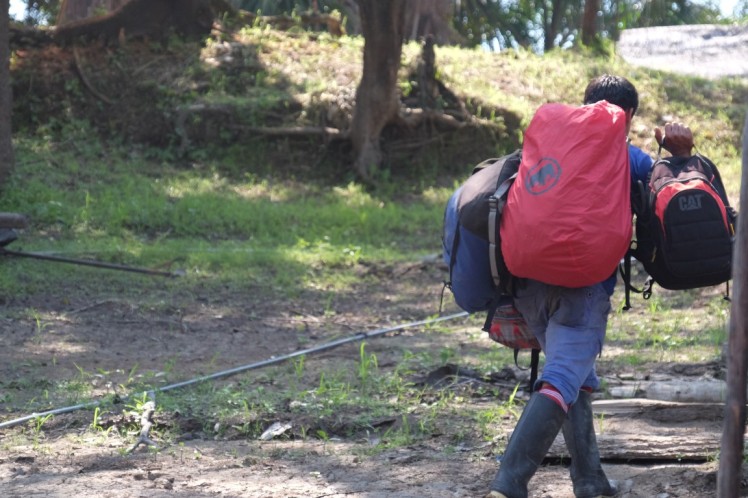 We got to that village. It was really hot and humid! We walked a bit.

And here we were, in the house where they had a sloth as a pet. In French, it is called a paresseux. Paresseux as an adjective means lazy in English. I had never ever seen this animal in my life and this is honestly the weirdest animal I have ever seen so far! Its head looked like the head of E.T ! 🙂 His fur was not as velvet but nice to pet. He was very cuddly, we all fell in love with it, holding it one after the other in our arms. Now, is that right that these villagers have a sloth as a pet? Nope, definitely not. I would 100 times have preferred to see it in the wild. And again, back to the Galapagos, I think no villager would be allowed there to have a penguin as a pet or whatever other Galapagos animal. Nevertheless, it was amazing for us to be able to see this animal though.

The sloth has really strong claws which help it when climbing trees. 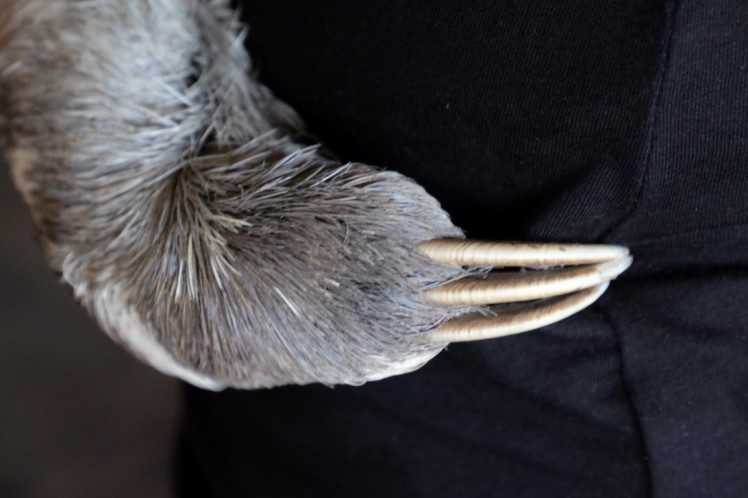 Yair put it on the floor after we had hold it in our arms and we could see it move towards the wood pole of the house and then climb it.


It was incredible to watch this animal move because it was indeed the slowest moving animal I have ever seen in my life!!! Even slower than a turtle!!!

We left the village and ran into these villagers. It was funny to see them with chairs on their head. Yep, that`s right, new fashion style to protect your head from the sun. 🙂 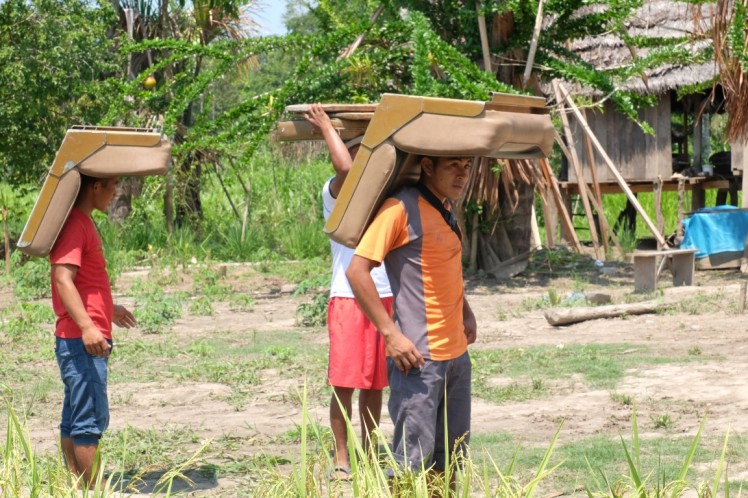 We got back to the lodge and were quite starving with Stefan, sat at the table waiting for the brunch but it was to be a lunch which would come half-hour to an hour later, so we ate all fruits we could while waiting ahahah.

During lunch, we met with a French couple in their fifties who were really cool. They had just spent 3 days in the jungle with a guide called Raoul and had seen sloths in the wild, snakes, 3 types of monkeys and a few other things. I know it is a question of luck but I do believe a good guide sees more things too, and what they told me confirmed that a bit. After the lunch-brunch, we packed our bags and off we went in the canoe, heading back to Iquitos.

View of the river from the boat

Now, about an hour boat away from Nauca, the motor broke down! They tried to fix it.

While they tried to fix it, Stefan and Nick started paddling to keep us moving closer to Nauca. Why not, hey. Nothing to loose here. I also asked Franck if we could not disembark here and get there walking, he said from here would be 2-3 hours walk. I could imagine us waiting for help for that time so suggested we went walking but he said there were no real tracks to get us through to Nauca, now that was another problem I guess. Alright then, let`s wait and see…It is funny because every time shit happens, I personally get super excited. A travel that does not have shit is not a travel. When travellers tell me about crazy stories which occurred to them, I always find them cool, because ultimately this is what travelling is also about, getting crazy stories, getting adventures. Having shit happen to you and learning to react to it in the most positive way you can. Making the most of it by not thinking about the present but rather thinking about the good laugh you will have later on when you think again about that day when…that time when this happened and…So here we were, the motor had broken and we were stuck!!!! Yihaaaaa!!!!! Let`s keep paddling then. 😀

The motor was still not being repaired and no boat had come yet, when a fisherman passing by with his son offered to help us by towing us to Nauca. 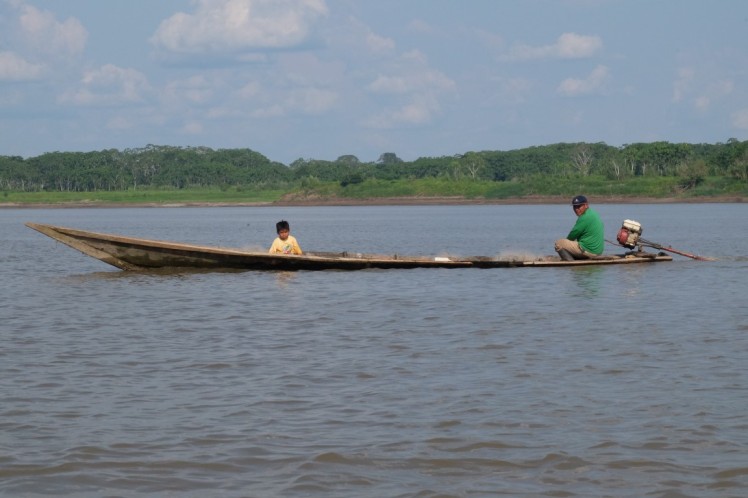 So here we were, he came closer to the boat, tidied up a chain to it and off we were! 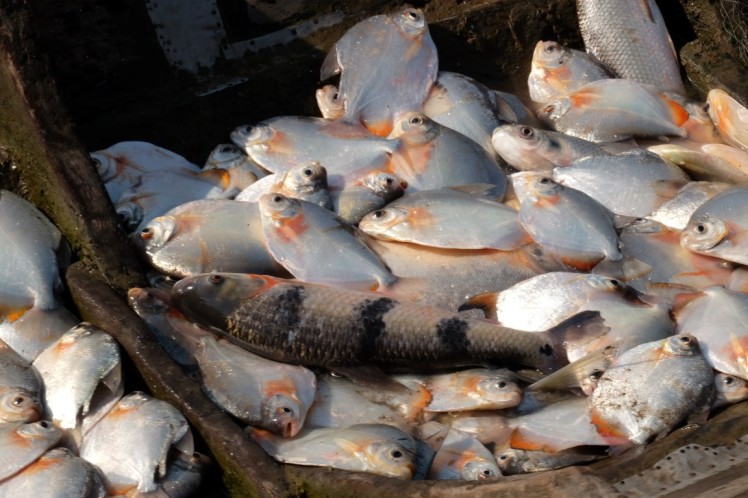 There was this moment we all freaked out when another boat came really close to his boat and almost crushed the front. Franck had the very good reaction of grabbing the son of the man onto our boat and make him sit with us. That other boat could have nearly killed him!!! It happened so fast, it was really super freaky. But luckily the boat went away and just bumped a bit into the fisherman`s boat without damaging it. And then we were back in Nauca. Bye fisherman, thank you so much, bye boat. 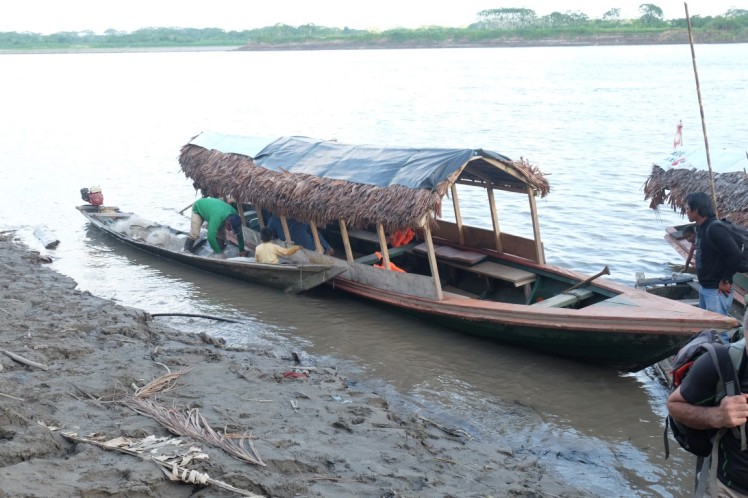 Back into a tuk-tuk again. 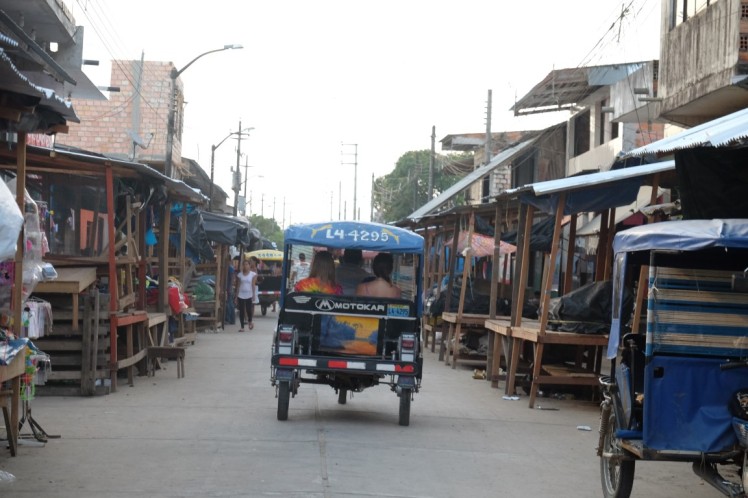 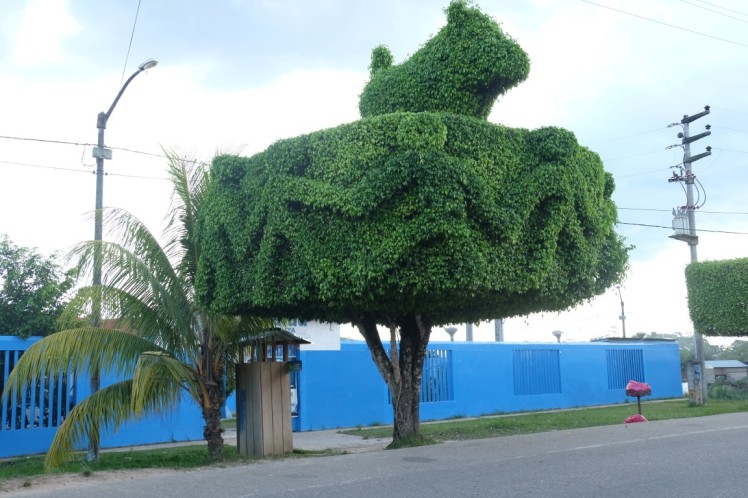 We transferred to a car and off we went to Iquitos. We saw this rainbow on the way back. 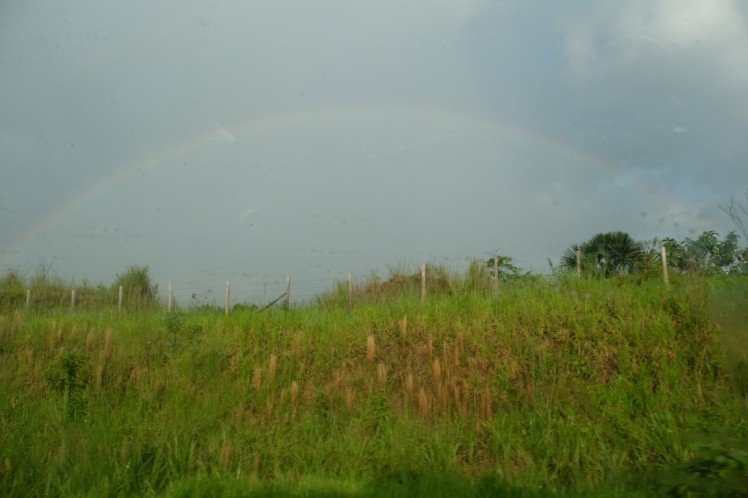 Getting into the crazy traffic of Iquitos, where entire families drive on motorbikes, without helmets. 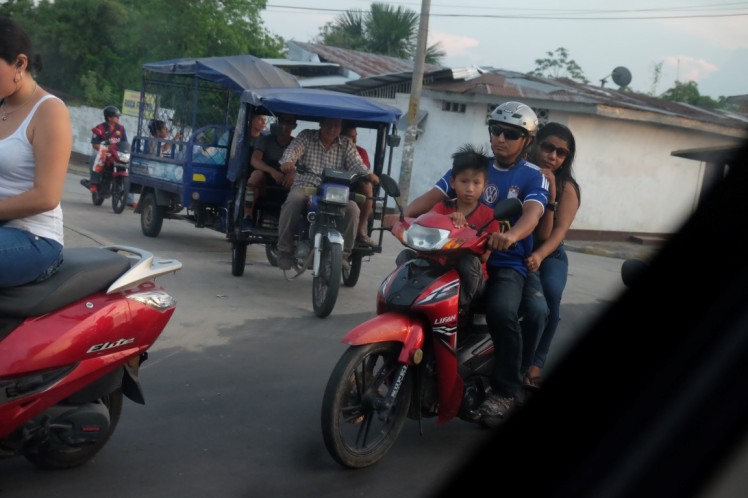 Back at the hostel, we went for showers and then met later to go for dinner with Katie and Rachel. We walked around for a while in many Iquitos streets searching for ceviche but not in the touristy expensive places in the sea front. Then walking back towards our hostel, we found a woman selling fishes and rice on the street, the most local place you can get. So we sat there on the plastic stools and had a wonderful local food, enjoying it with the locals eating there too. I asked her what her eatery was called, and she said “Restaurant del amor”. Ahaha, that was cool, I like the name. After that, we met Jana, Stefan, Miriam and Nick for beers in a pub nearby and had beer after beer, I tried all varieties of the Cusqena beer I think. There was an American guy from my dorm who joined us along with a half-Peruvian half-American guy he knew. With Nick at some point, we went to play at a game where there was a guinea pig under a box, in the centre of a circle made of 30 boxes each of them numbered. Above each numbered box was a small gift. We bet on a number each, it was 1 sole each time. After a few times, I won! My gift was a mini kitchen set for barbies. I looked around me and found a little girl and went to her and offered her the box, I think she was happy. For me, just the game was what all the fun was about, and giving that gift to the little girl made me happy too! We went back for beers and then decided to go for karaoke next door. They were sadly playing the last song, so we just sang it as lyrically and theatrically as we could. After that last karaoke song, the bar was playing Stromae! In Iquitos! That Belgium artist is absolutely brilliant so it was fantastic to hear his song there, it was so weird at the same time. We went back to the bar for beers until it closed and then back to the hostal. That evening, I was walking camera free, so no shots unfortunately.

Next day, back to Lima for a few days!