With Claudio and Annina, we had breakfast with my dorm-mate, Daniel, who was also Swiss-German. He was keen to join us going to Quila Quina but had some errands to do, so went for that first. We left the hostel a bit later and started walking to the pier to embark on the 11am boat. Spring kept blooming. So beautiful trees around! 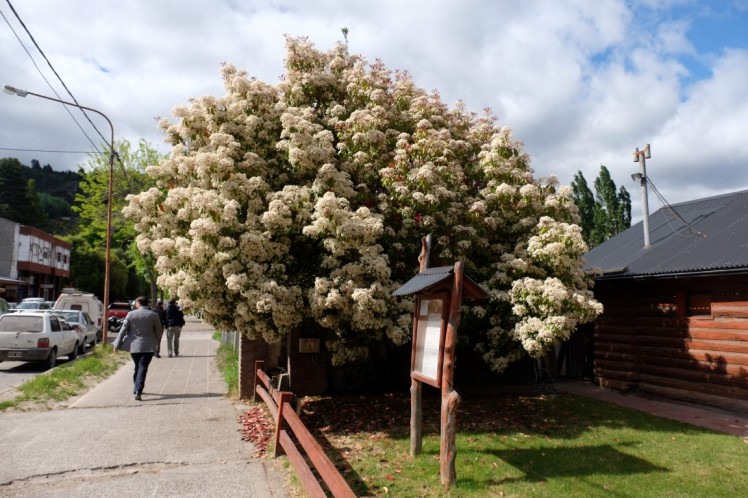 We passed the church.

Arrived at the lake where we can definitely see in which direction the wind always blows when looking at these trees.

We arrived at the pier where we bought the entrance tickets to the National Park. 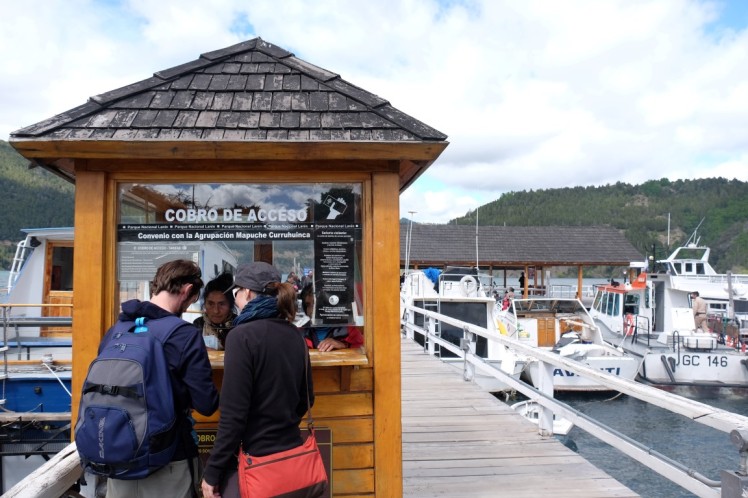 About to board the boat.

Inside the boat. That day, there was a full school class going for a day to Quila Quina.

View from the boat`s window towards the shore where we can see little houses which could almost make you feel like you are in Switzerland.

And off we went. On this map, you can see San Martin de los Andes, where we left from and Quila Quina, where we were heading to for the day.

Landscape in front of us.

We passed these awesome cliffs…

…and tried to imagine how they came into place!

We arrived at the pier of Quila Quina.

There was a funny doggy who came immediately at the entrance where everyone would walk pass so people would pet him. Smart one. 🙂

There was this family of geese walking away when we arrived. Cute.

We started walking on this road to head to a waterfall.

These flowers are called retama and come totally yellow or as a mix of yellow and red. They grow on bushes and Germans imported this bush to Patagonia some hundred years ago when they settled around here to make natural fences around  their houses.

We had this beautiful view to the right while walking. 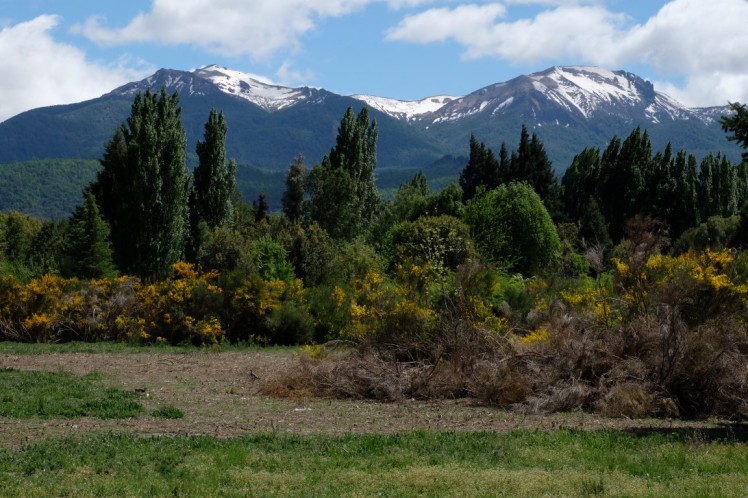 We passed this house where there was a mummy horse and baby horse. The guy told us to enter and we chatted with him a bit. The baby horse was only 7 weeks old. So pretty, looking so fragile!

We paid the entrance fee to the Mapuche community guard of the waterfall and started walking towards it. Hopefully Pinocchio was showing us the right path! 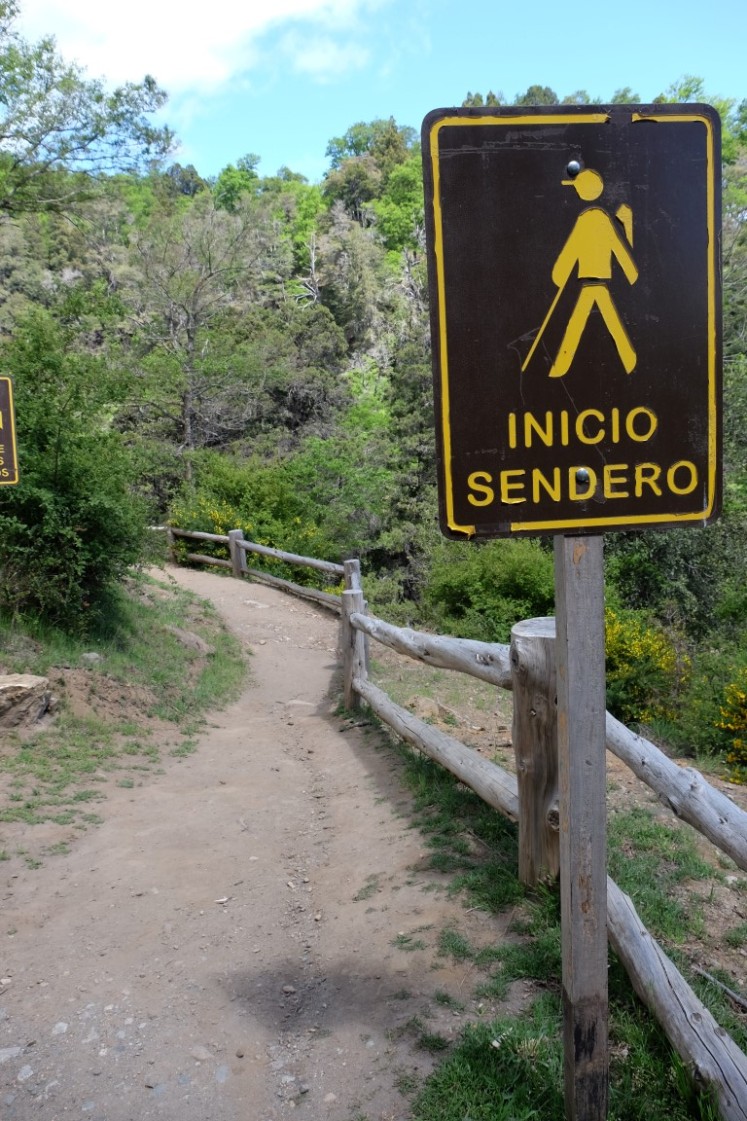 During the walk, Claudio was telling us about his 5-week experience of riding horses in Mongolia with a group of friends as a project that he had done a few years ago. It was really great to listen to it, it sounded really awesome, and was very inspiring to hear about it. Here was the waterfall at the end of the walk.

We stopped there and had fun taking lots of photos. Climbing this massive trunk to see the waterfall from closer was fun.

After leaving the waterfall, we stopped nearby where the sound of it was less deafening and made some lunch with the bread, tomatoes,
cheese and avocado we had bought, using our swiss knives and spork. 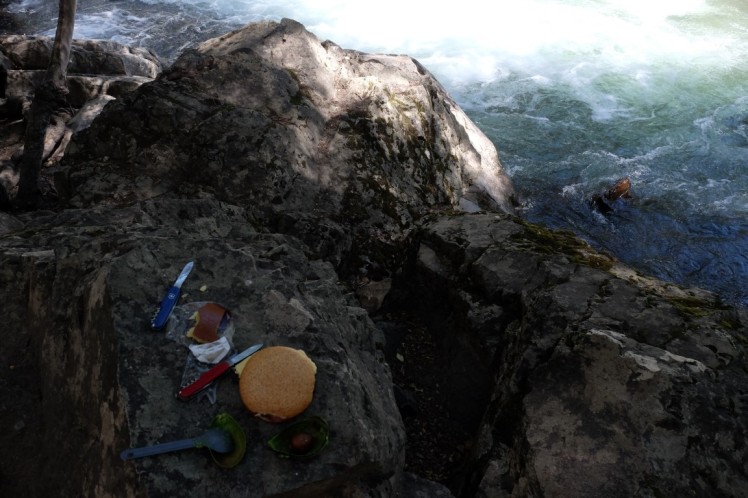 Then we continued our walk around. We walked on a bridge from which we had this view.

We ran into this campground and thought: “Hey, we could have come with our tents and stayed here actually!” but then there was a guy around to who we asked about the price and he told us that the camping was not opened yet. It was low season and it would only open the next day or so. Again, we were a bit too early!

However, he told us that there was this other one down the road which was opened. We could have gone to check it out but didn`t have our tents anyway, so headed to the lake instead. Another time!

We passed the group of kids we had seen on the boat and arrived at the lake. The kids had sent a ball to the water by mistake. Claudio kept an eye on it to see when he could get into the water and then went in and grabbed it and handed it back to the teacher.

There was this funny wolf`s head on the beach. 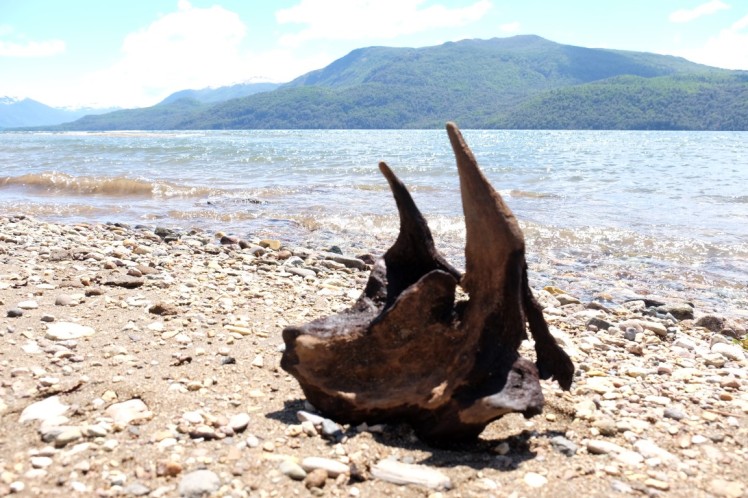 Continuing our walk and having fun here taking more photos.

On our walk back to the pier, there were lots of Switzerland style houses which were closed. We could imagine that these houses were the secondary house of people living in cities and coming here in summer for the week-end.

We were so lucky with the weather. And Spring was so pretty!!

The boat leaving at 3.30pm was at the pier. Daniel had decided to take it to go continue organise his next few days and was on it.

We sat down at the tables at the pier and had some beer and enjoyed the view of the beach. It was nice to be able to be outside as in San Martin de Los Andes, it was too windy to sit outside by the lake! 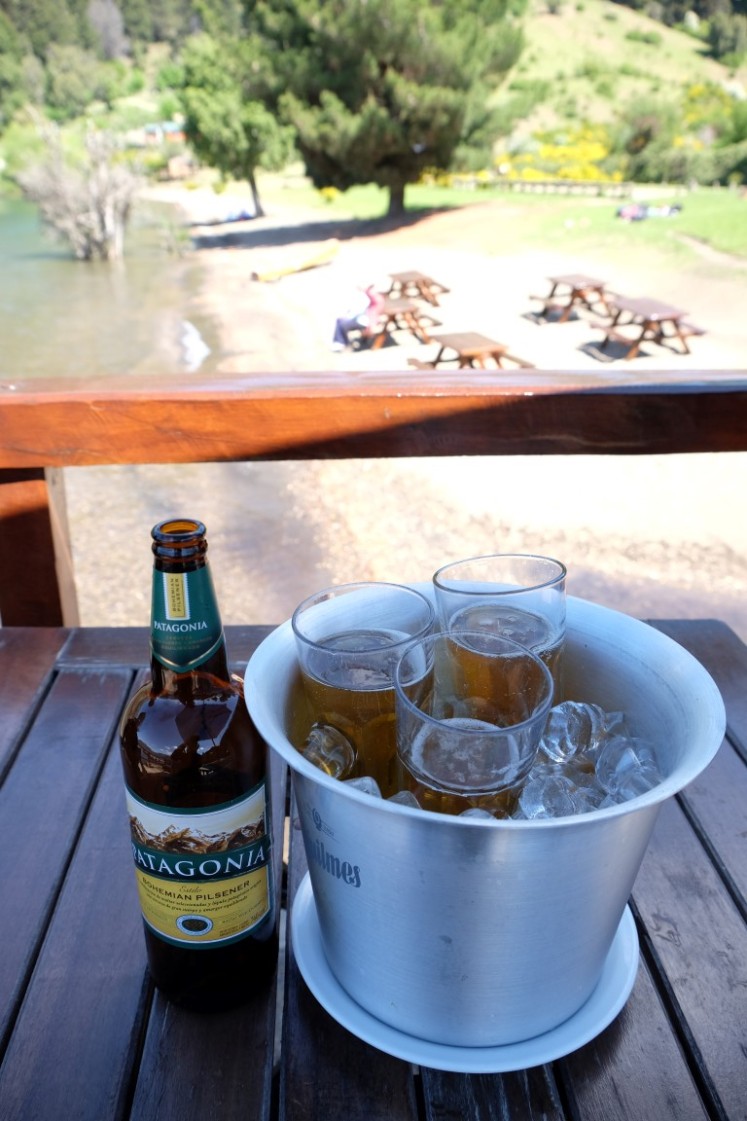 We saw again the goose seen in the morning, cruising on the water this time. At some point they went out of the water and a dog was annoying one of the baby goose. A human had to go stop the dog and push the baby one to the water. The geese were shouting and  screaming and then all went fine when the baby one went back swimming with them. Goose story of the day.

We went to sit on the beach and watch the wild life cruise by. Beautiful duck. 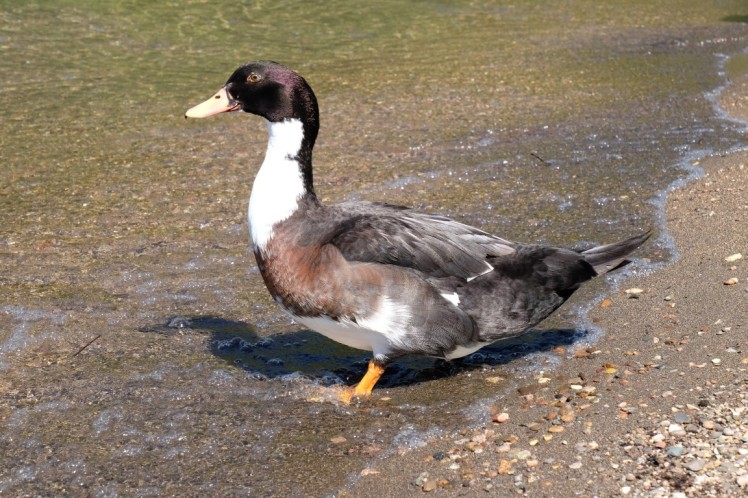 Patagonian geese or ducks or something. 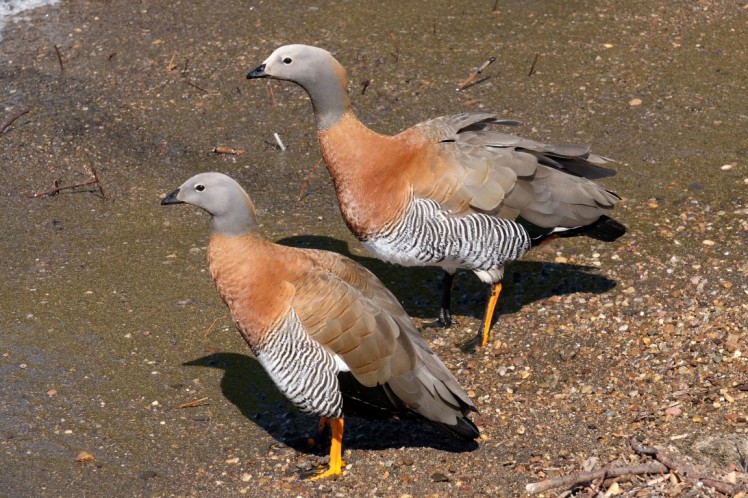 Before to leave, I bought some retama honey from this little store located next to the pier. He gave me some herbal tea bag containing some lavander and some petals of hibiscus tea maybe which turned out to be really delicious.

Back in San Martin de Los Andes, we stopped at “El Refugio” again to let him know which hostel we had booked in Bariloche where the
driver could drop us off the next day.

View of one of the streets.

We were back at the hostel and connected to the WiFi. It was 6.20pm when I got a What`s App from my brother saying on the family chat “Hi. There has been some terrorist attacks in Paris. I am fine.” I was thinking: “What? Uh? What???!!!!” and started reading the news and learning about what had just happened. I could not believe what I was reading. Seven terrorist attacks at the same time in various spots of Paris. At that moment, they counted about 40 dead people. We were about to go for dinner and went for a nice parilla. I had not realised at that moment yet the amplitude and terrible drama and meaning of what had just happened.

We came back from dinner and I read more. What had happened was just so horrible, so sad.

I went to bed with these events bouncing in my head.

The next day, off to Bariloche.