We had the ambitious plan the next morning to be in the kitchen with bags packed already at 8.30am, to eat and then shoot off to find another hostel at 9am and somehow to be on the road around 10am.

The alarm rang at 8am but neither Fredrik or me moved. We were still really tired. It rang again at 8.10am. Rang again at 8.20am. Alright, at 8.23am I woke up and started packing slowly. At 8.44am I was in the kitchen. We started preparing brekky, porridge and crepes. But we needed more milk. Daniel and Fabiola went to get some. Added the milk. Made crepes. We kind of finally ate around 10.30am! But what a nice brekky it was!! Here is the dining room where we were eating meals. 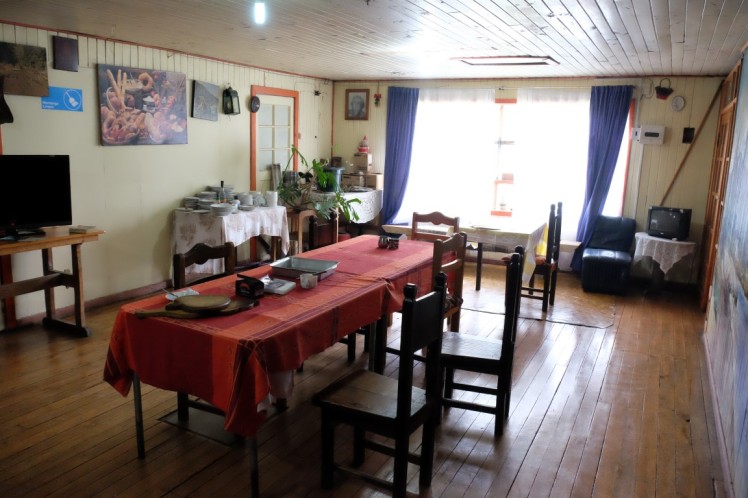 We shoot off at 11.10am without the bags, the 4 of us in the car of Daniel and Fabiola and went around to find another hostel. The one where we had stayed was ok, but dirty and untaken care of. Apparently the landlord was not around for a week and the lady taking care of the place was not really doing her job. We wanted to be in a cleaner place. First, we stopped at Hostel Don Quichotte located in front of Chaitur. It looked good but they didn`t have a kitchen in which we could cook.

Then we stopped at a hostel called Las Nalcas. They had a kitchen to cook but it was full that day. They also offered to camp but I was the only one with the tent. 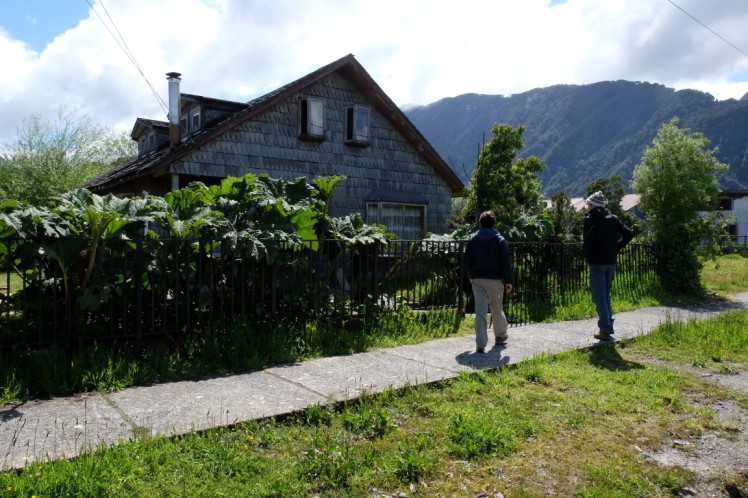 Then we stopped at the Trekanpangui. It offered only camping for 5,000.

Then we stopped at the Hospedaje Chaiten. The hostel owner had twin room and double room and a kitchen where we could cook. We checked out the place,liked it and decided to come here. It was 11.40am. Wwe went back to Rita hostel, grabbed our bags, moved to Hospedaje Chaiten, took fruits and veggies for the day and finally shoot off. It was 12.40pm.

Crazy how everything takes time! We were finally on the road, on the Carretera Austral heading in the direction of Chaiten Volcano.

We got there around 1.20pm. We could see the volcano in the distance.

Sign before to start walking. The story goes that there was a huge eruption at sunrise on May 2, 2008. Four days later, there was another explosion, the lava went down very fast and destroyed all the wood around.

Off we started the walk.

First we saw some giant Nalca rhubarb. Fredrick is 1.95 meters high, and it was higher than him! Here is a picture of him climbing it, the way Jack would have climbed the magic bean!! 😀

It was really interesting to see the disasters the eruption caused from closer. Most trees were dead. The landscape we saw was striking and unique. It told the story by itself.

Continuing up on the path. 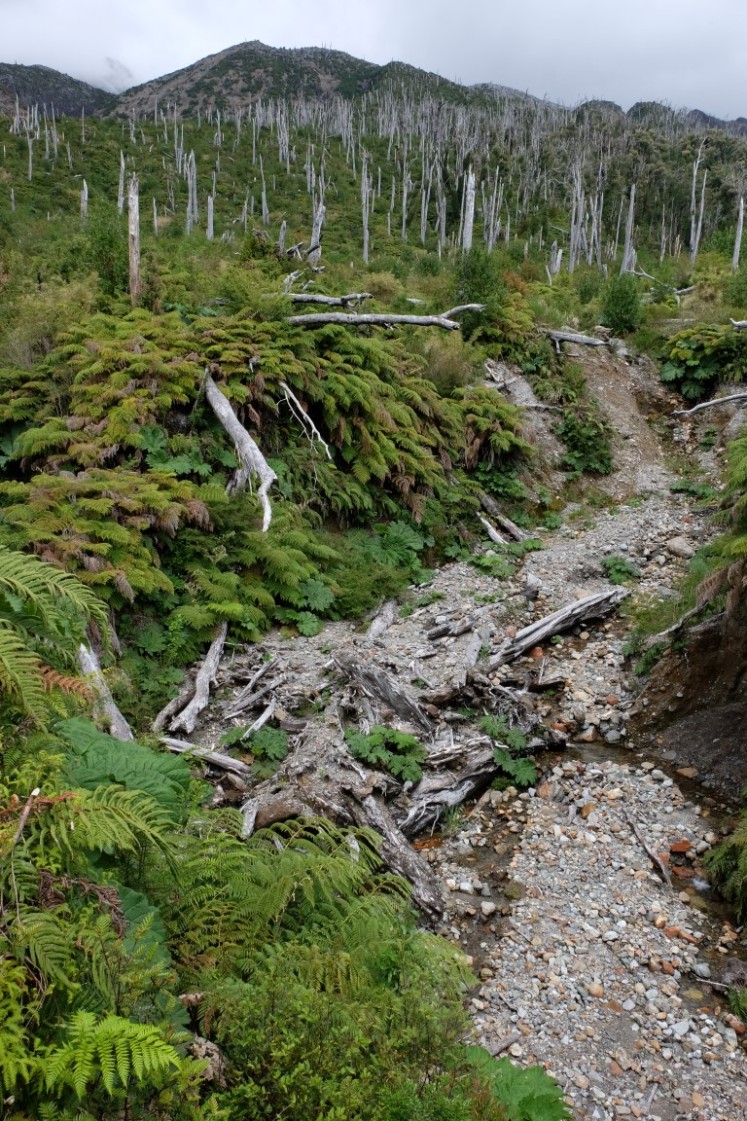 View we had to the right of the lake in the distance after about 20 minutes walk.

The volcano ahead of us, towards which we were heading.

Some obsidian stone found on the track. There were plenty of these stones here.

The stairs to go up where pretty gigantic. The woman keeping an eye on the Rita hostel why her friend was away had told us that those stairs were built for gringos but not for Chileans who tend to be shorter! 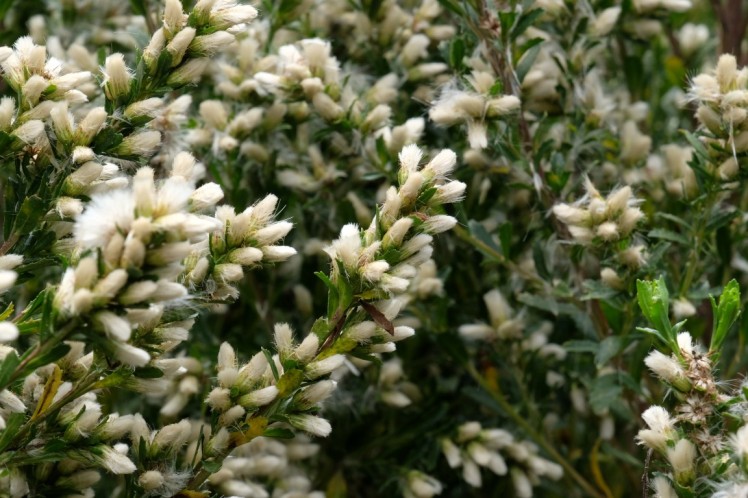 We sat on 2 benches where we had lunch (avocado, peach, apple, nuts and so on, even some nalca too). Rhino we could see behind us. 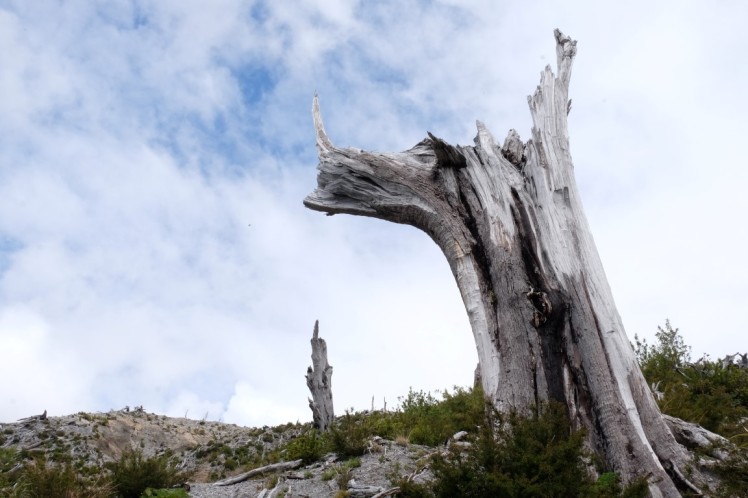 We had an awesome view from the benches. And a great king seat in which Daniel stayed for a while contemplating the view.

View to the right. What a crazy landscape with all those dead trees really.

We arrived at the top. Here was the volcano in front of us. And of course, I forgot to take my wide angle. Grrrr. Would have been an awesome shot fitting everything in. I always carry stuff when I don`t need them and don`t have them when I need them. So annoying. Anyway. The view…was just…stunning! And we had it all for ourselves. Not like when you are at the Valle de La Luna for the sunset near Atacama and there are 500 other people near you. We ran into a group of a dozen people going down while going up but that was it. The rest of the day, we saw no one else. The most beautiful places of this world tend to be even more beautiful when there is no one else around!!! 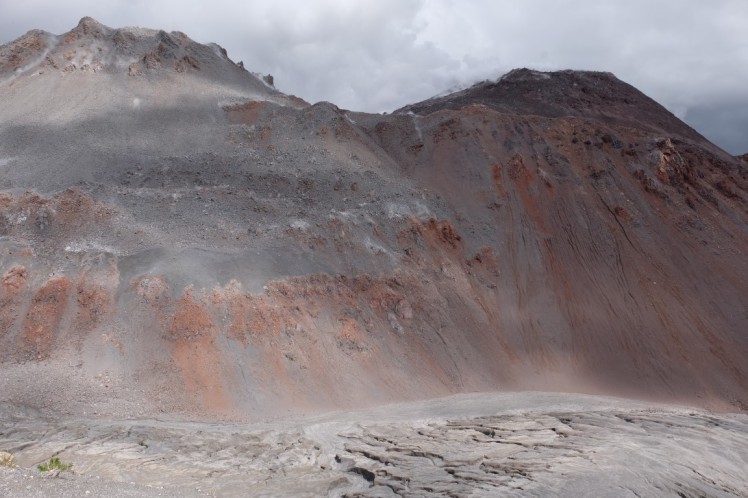 Zooming in on the volcano fumes.

Looking back behind us, view to the right to the lake. 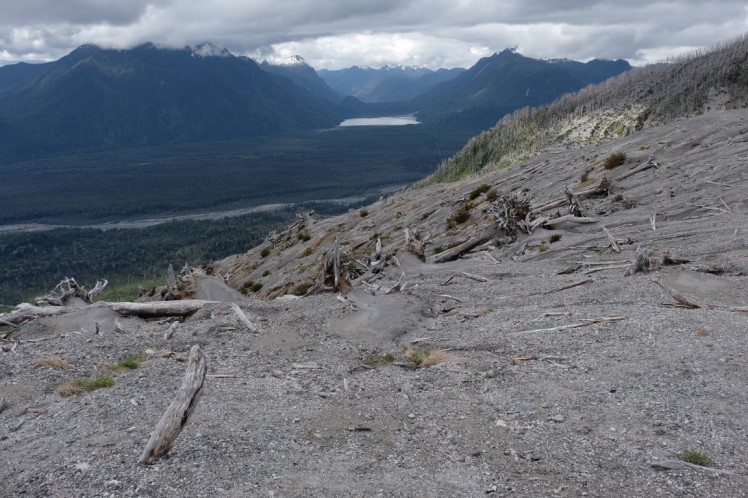 View to the left to the ocean.

Looking in the direction of the volcano,view to the left.

View to the right.

Zooming in on two lakes, Laguna Verde and Laguna Amarilla. 🙂

We were a bit frustrating not to be able to go to the top of the volcano and eager to walk a bit more. So we went right on the rim, continuing further.

Mushrooms growing on the dead wood 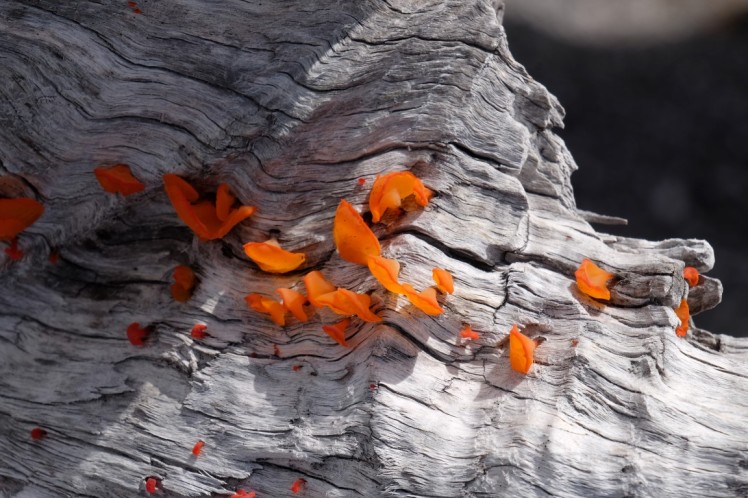 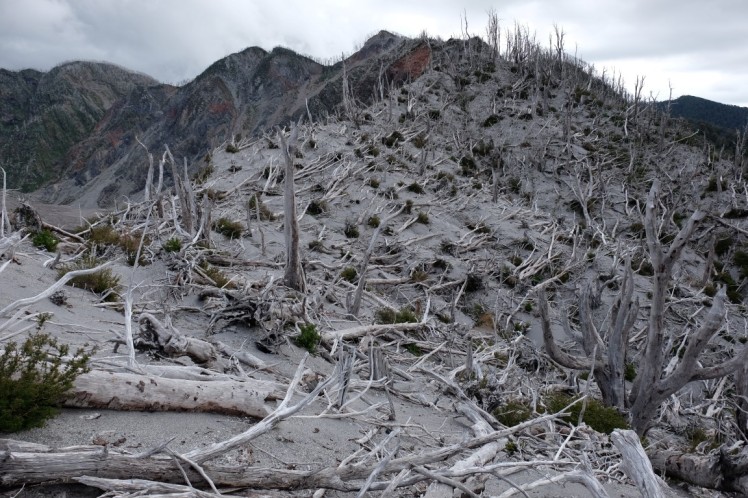 Looking down to the Laguna Marone.

We reached a point from which we had this view. 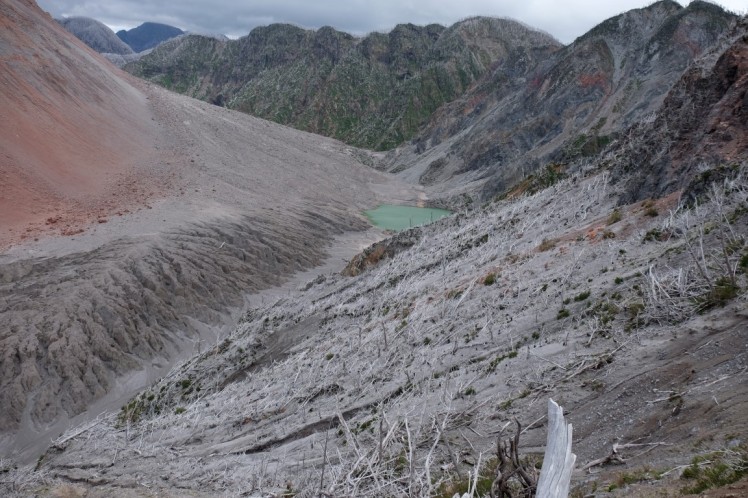 I was very excited. I could see here a potential for a multi-day hike full of exploration. Lots of food, a good filter for water, a topographic map if that existed, a GPS. What an amazing hike it could be, off the beaten track, to walk up and down and up and down this ridge surrounding the volcano.

Where would that take you? What was there to see behind the mountains far away?

And could there be away to climb to go down to the lakes and even go climb the volcano? Looking down from where we were, it sounded feasible to go down here. If we had more time in the day, it could have been a nice little stroll closer to the lake down there to go down and back up.

This volcano was calling. It looked so interesting to go check it out. All those fumes..

But it was 5pm and we were not prepared for that. Another time, one day, maybe…? 🙂
So we turned back.

Little flower where we had stopped. One of the very few we saw there!

View in front of us while going back.

View towards the ocean. 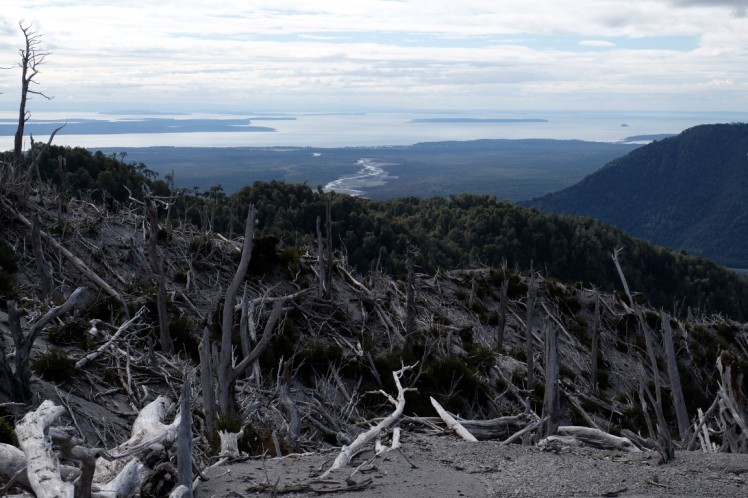 Heading back to the top of the sendero.

Heading now down on the sendero.

I remembered what Claudio had said when we had looked at the ridge on the Villarica volcano. If there was an eruption, it would be the safest point as the lava would go left and right of it. Here, this point may be the same depending on the type of eruption that would get out of the crater though.

Looking back to the volcano. 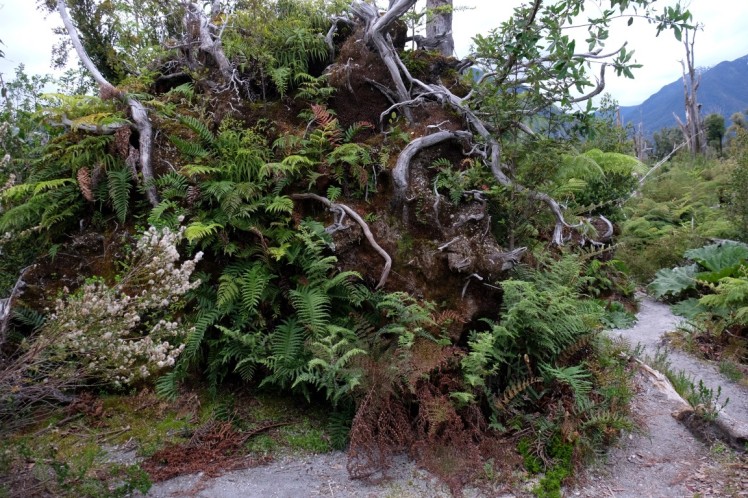 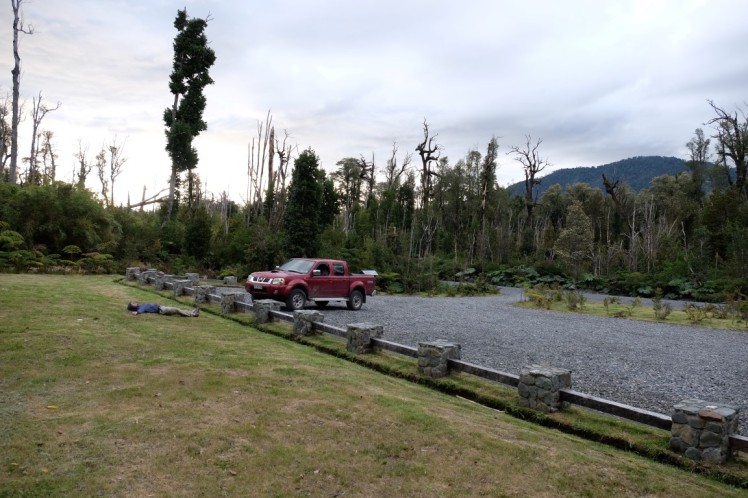 We stopped at the dolphin`s round about. 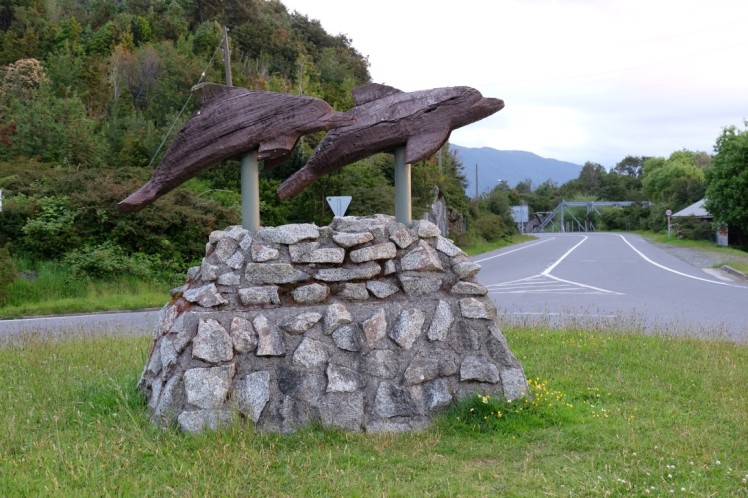 We enjoyed the sunset there.

View of the beach to the right. 8.39pm. The light was at its best, so soft, so warm, so pretty. The Golden Light which every day only lasts for a few minutes. The best time for photography, but so short! 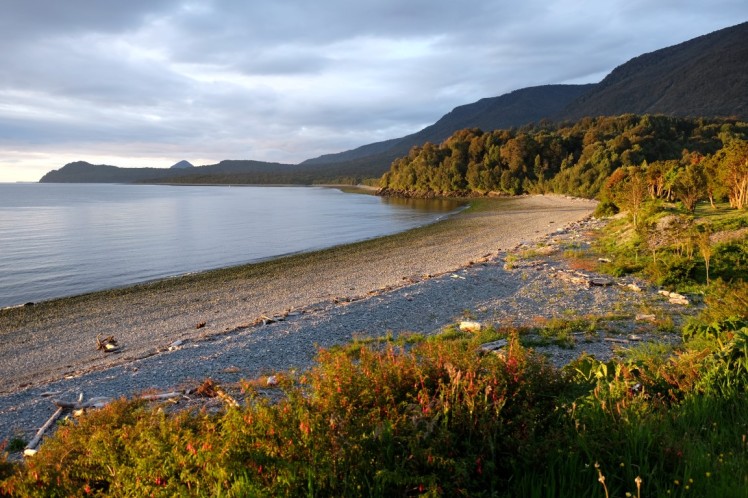 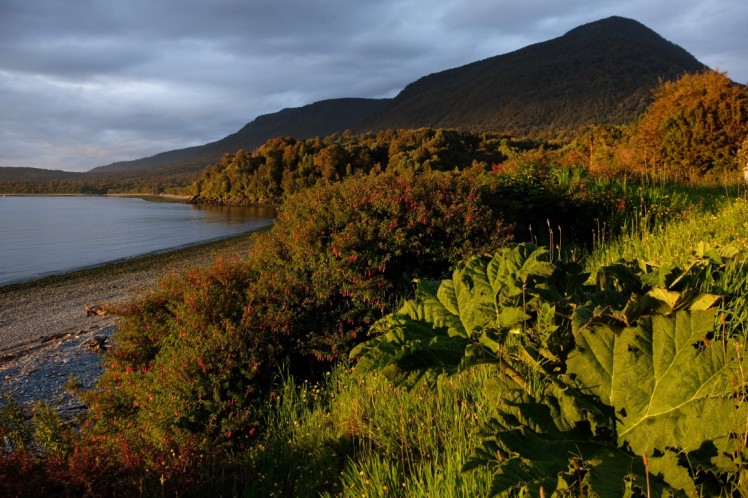 Golden light on the nalca.

I went down to the beach to get closer to the water. Golden light on the sea.

The sun disappearing in the clouds, and with him the Golden Light. 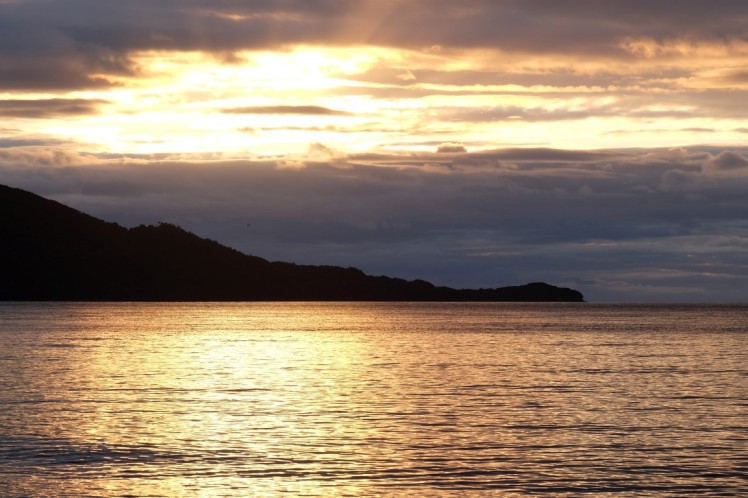 When I went back up, Fredrick, Daniel and Fabiola were watching the sea. They had seen three dolphins! Yeah! I missed them though. 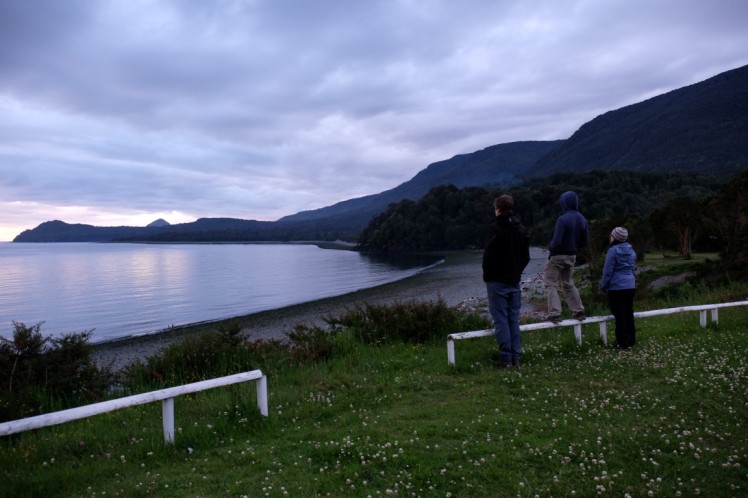 It was 8.51pm. The Golden Light was gone and we were getting hungry. We drove back to the house and cooked and had a nice dinner again. It was 11pm by the time we ate. We swapped photos and it was 1am by the time we went to bed. Something going on in Chaiten, as if the time flew faster than anywhere else! But what an incredible day we had again thanks to them! Here is a picture of the traditional wood fire stove used in many houses in Patagonia. There is more wood around than gas. 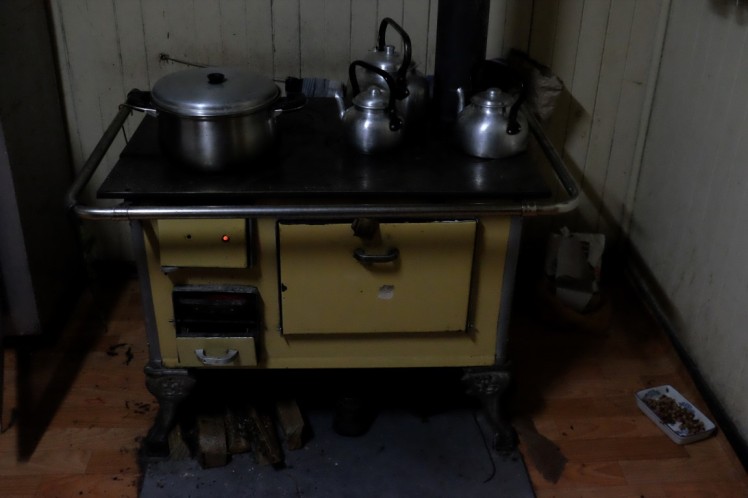 Tomorrow, off to Futaleufu!