We woke up around 9.15am. Fredrik was up faster and went to check if Francisco had opened his fruit store but he had not yet. He came back and started preparing brekky. I got up and went to see if it was now opened. It was still closed so I walked to Chaitur to confirm that the bus for Futaleufu was at noon. Nicolas Penna confirmed that to me and also suggested that we could buy the bus ticket there so I bought 2 tickets. He asked me if he could record me counting until 10 in French. Sure, why not, ok. Got recorded counting from 0 to 10 in French. Then I got recorded again counting 10,20,30 and so on until 100 in French. I enquired about the people we had seen on horses in the forest two days before and on how I could print the photos of them to send them. I took the phone number of Patty, the woman who sold me the bus tickets so I could send her the picture on What’s App and she could show it to a man she thought to be the son of the son of the woman and if confirmed, then she could tell me how to send the printed photo. Let`s hope it works out. By the time I got out of Chaitur, the fruit store was opened and I could buy some fruits from Francisco for brekky and for our bus ride. Then I headed back to the hostel.

We had breakfast with Daniel and Fabiola and then they left, as they were grabbing the ferry of 11.30am to Honopiren. It was 10.45am and we had just enough time to wash the dishes, pack the bags, chill out 10 minutes on WiFi, say good-bye to Manuel, the owner of the hostel and walk to the bus terminal. A couple of people were waiting there. The bus arrived a few seconds after we arrived. Perfect timing.

The bus ride was stunning. Apart from the first 20 minutes, the rest was on a really bumpy road. I was lacking behind on preparing blog articles so I still managed to spend the full journey writing down the events of the few previous days to not  forget those magical moments and places we had been to and people we had just met. Time flies and things in our memory fade away so fast!

Here was the map of the area and road journey we took from Chaiten to Futaleufu.

Here is a mosaic of some of the landscape we saw during that bus ride on the Carretera Austral. What an incredible landscape, even if most of the road was so bumpy. Part of the adventure! 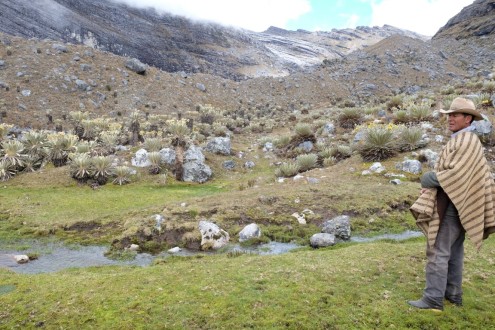 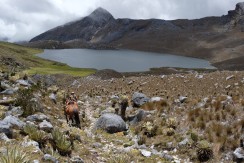 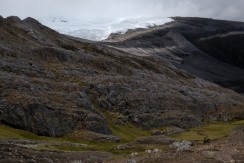 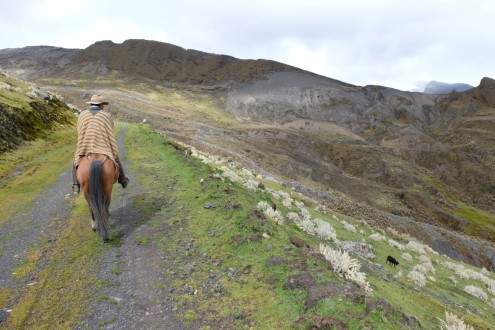 We arrived in Futaleufu around 3.30pm and grabbed our backpacks from the trunk. When the driver opened the trunk, lots of dust evaporated. He knew how dusty the road was and had protected the bags with a huge plastic bag separating them from the door.

If you were arriving there really late and wanted a hostel right next to this bus, Hostel Canete would be right in front.

I asked the driver if he knew when the buses were going to Esquel. He said there were 2 buses on the Monday and 2 buses on the Friday, a morning one at 9am and an evening one. We walked down the road to try to find a hostel called Las Natalias. Futaleufu is surrounded by mountains. 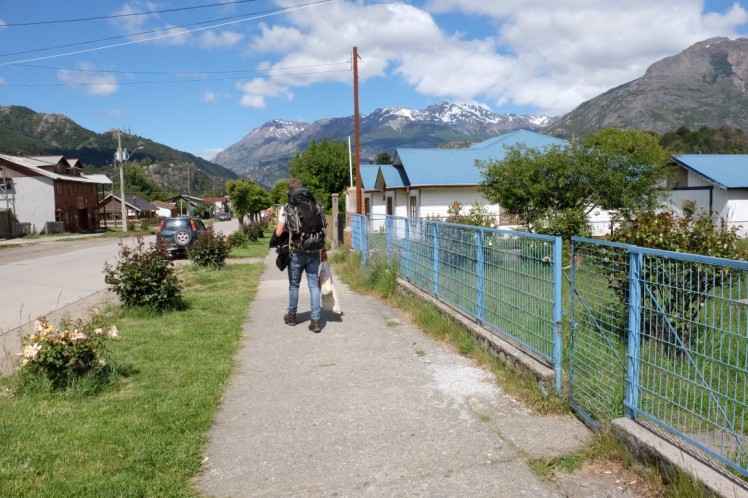 On the Tripadvisor map, it said it was in the town centre, but we couldn’t see it there. We asked a man in a jeep who was passing by and he offered to take us there. His name was Arturo and he owned a campground called Puerto Espolon and was making his own beers. He had a cool jeep and dropped us at Las Natalias where the owner Nathaniel walked down to meet us and say hi to him. 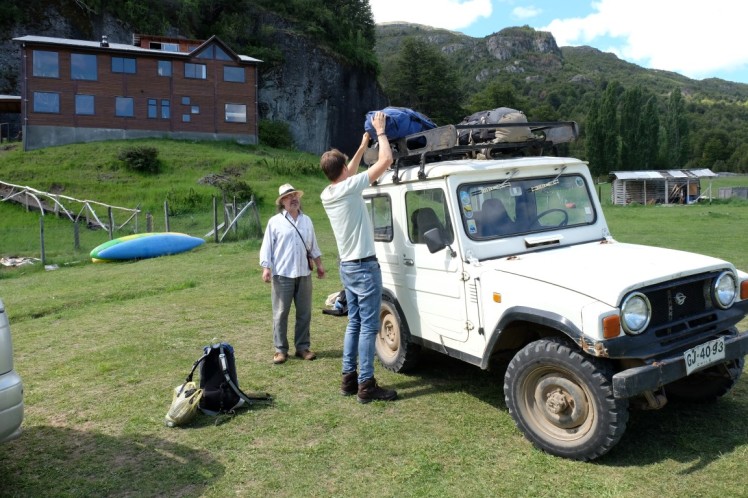 Nathaniel introduced us to the few people who were staying there too, showed us the kitchen and so on and then showed us a dorm room where there was no one. Pretty spacious at this time of the year! The place was all in wood and really beautiful with a great view of the mountains around.

I asked him where to buy the bus ticket for Esquel, where to book rafting and buy food. He showed me this map.

The little house in the top left corner is where Las Natalias is located. It is on Pedro Aguirre Cerda, towards 0-99 to the left but actually rather -99 itself! When we walked around, we thought it was at number 11 on this map. He explained to me to go to 34 to buy the bus ticket, to the M of Manuel Rodriguez street  to check out Outdoor Patagonia for the rafting and to Casa Andrea at number 27 to buy grocery food.  Sorted! Fredrik wanted to skype for half-hour so we decided to meet a bit later in town and I shoot off.
Walking down from the hostel.

I stopped here to buy the bus ticket to Esquel.

View of a street of Futaleufu.

Chatted with the owner Pedro, who showed me this map and explained to me the full day option and the half-day option. 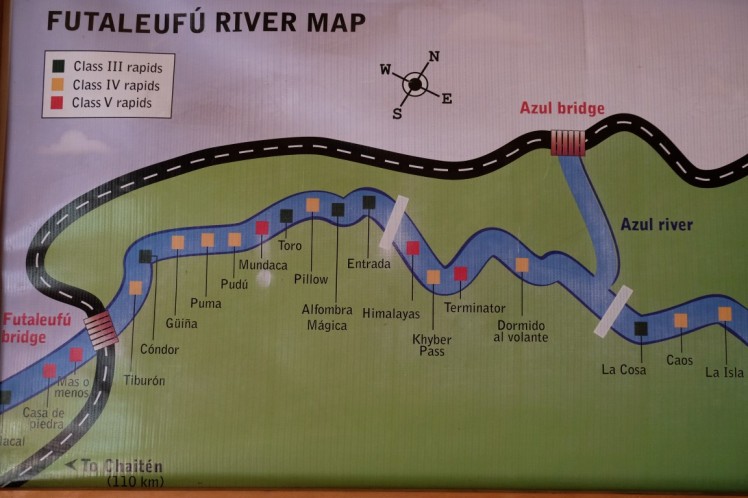 Walked through the main plaza. 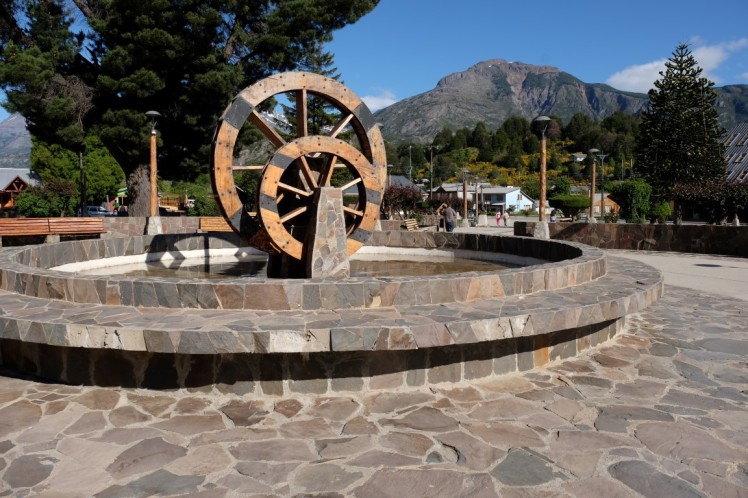 View of another street near the main plaza. What a cool place that Futaleufu!

Bought some food at Casa Andrea store and the local artesanal beers made by Artura and more food in the store in front of it.

Fredrik met me in the second store, we finished the grocery shopping and then went again to Outdoor Patagonia where we signed up to go rafting the full day the next day. Then we stopped at Navier Austral which also sells bus tickets where Fredrik enquired about buses going to Cohaique. He had fallen in love with Futaleufu and was keen to stay a few more days and then shoot off in the direction of El Chalten. The woman informed him that there was one bus a week going to Cohaique on Fridays. Otherwise he could take a bus to Santa Lucia and from there connect to a bus going to Cohaique from Chaiten every two days. After that, we walked back to the hostel. Picture of a house and an Araucania tree and mountains in the background in one of the streets. 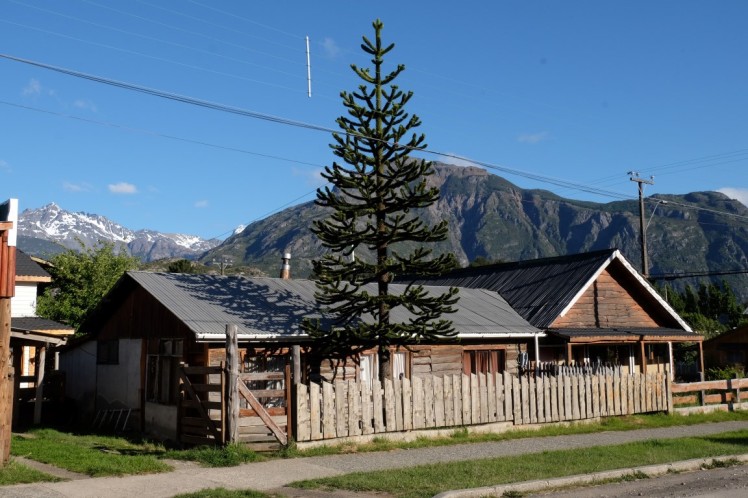 View from the path before to arrive at Las Natalias. 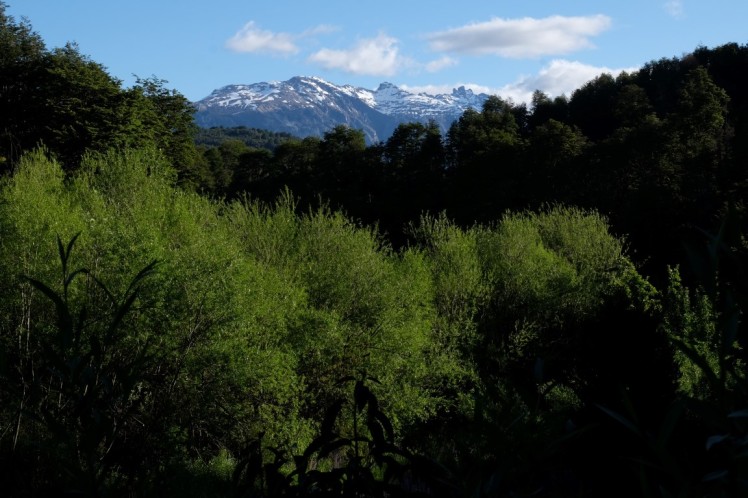 We were back around 7.15pm. Fredrik went for a run while I sat and tried to catch up on preparing blog articles. Here are the 2 local artesanal beers we bought that Arturo makes and that were about to drink that evening. 😀 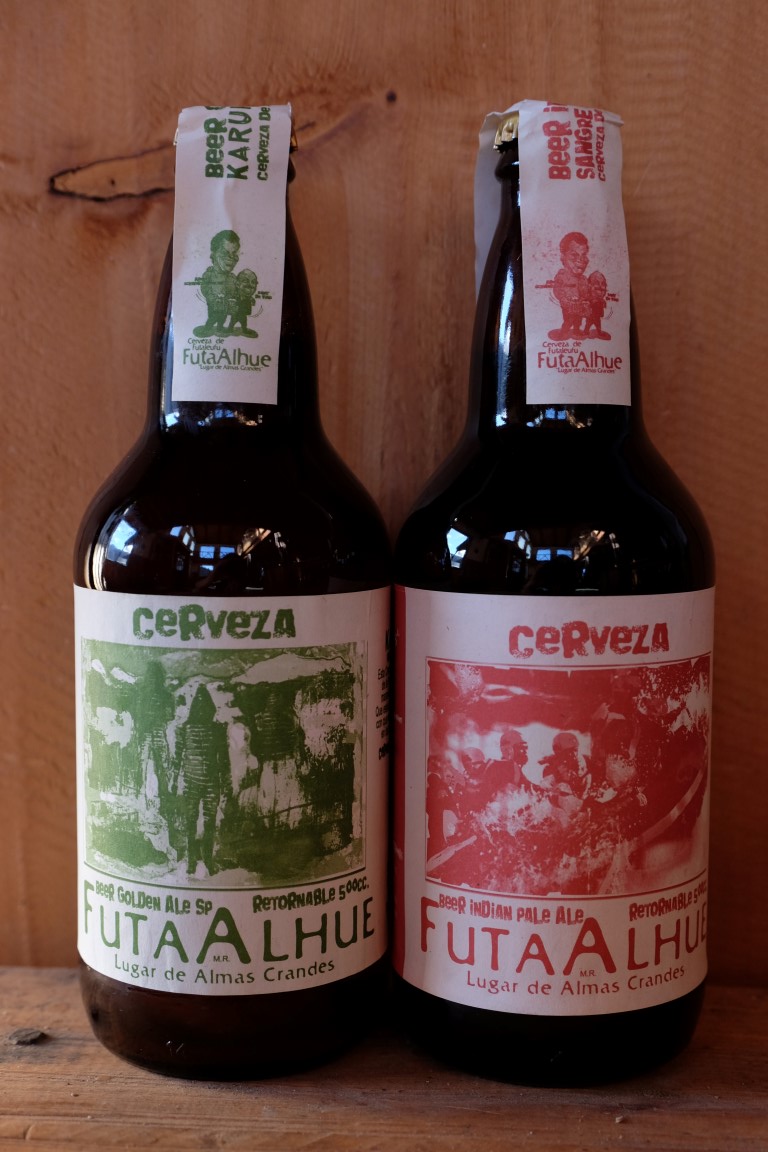 A view of the living room from the top, the table hidden in the corner behind the brown sofa was the cool spot where I sat for a bit, enjoying the sunset light.

On the second floor, there was just this guitar in the corner and nothing else. I loved the fact that Las Natalias was such a Minimalist place. 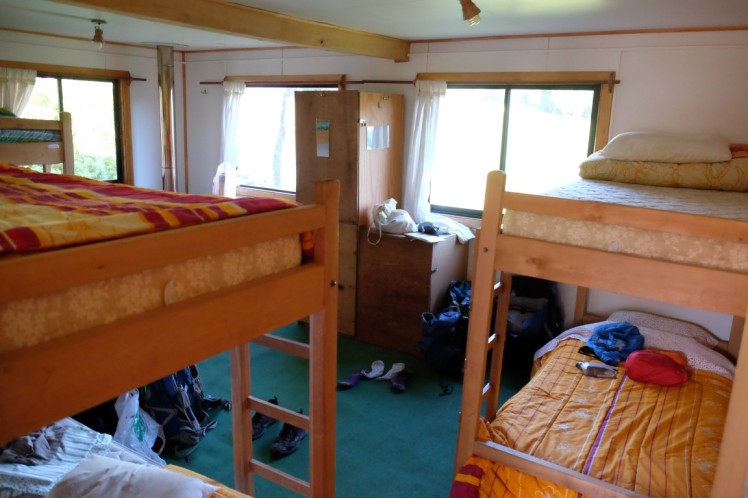 Within minutes, the sun was gone behind the mountain. No beautiful colours though.

But you will be asking, why is it called Las Natalias? Well, the owner`s mum and grandma were named each Natalia. In their honour, Nathaniel decided to call this place that he created in 2012 “Las Natalias”.

A Danish guy and a French guy came back from some walking around and we started chatting, then showers, then cooking and more chatting with them and other people. The French guy was in his fifties, living in Noirmoutier and travelling for a bit. The Danish guy had started his trip in Buenos Aires and was travelling for a year, he had already travelled for 8 months. He was doing a cool foody project with school students where he was meeting a local person in a city, and  filming them doing a local recipe and otherwise sending photos of his cycling trip. The evening was gone again before we knew it!