The bus was a bit late. While waiting, I chatted a bit with Francesca. She had been teaching kids about sustainable development in Berlin in Germany but her project had finished and she had not found another job so she had joined her friend Alex on the part of his trip through Patagonia. Alex had already been travelling for a few months and wasn’t sure yet when he would stop! How cool!! The bus arrived 30 minutes late, at 5.20pm and we boarded it. Ready to go on Routa 40!!! Yihaaa!! 19 hours of bus, here we come!

Here was the itinerary of the 1,000km journey ahead of us.

It was half-full which was great. I had the last 4 seats at the back just for myself and could move from one side to another to take photos while trying to prepare some blog articles. We were given an afternoon snack when we boarded including one of the famous Argentinian alfajores, a kind of biscuit with caramel cream inside which is delicious. Yum! 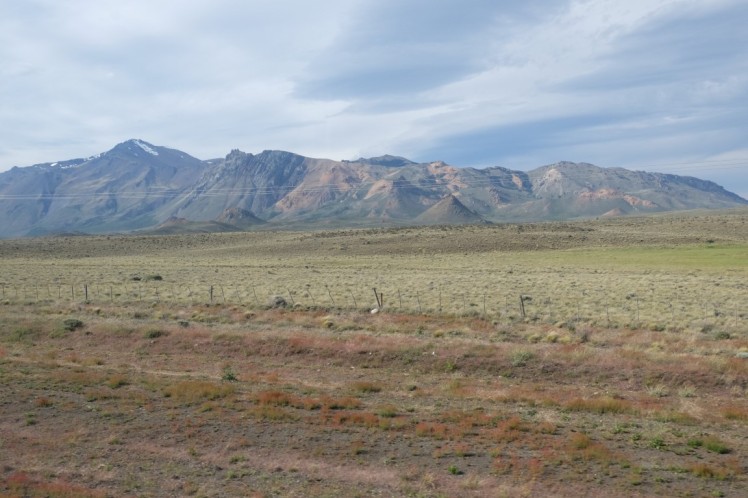 The clouds are so impressive too.

Here are some photos taken out of the window during the bus ride that afternoon. 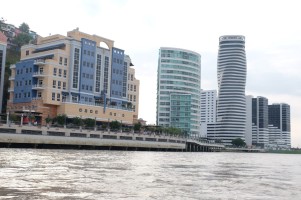 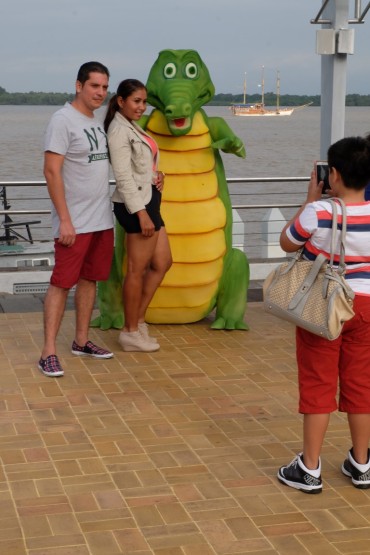 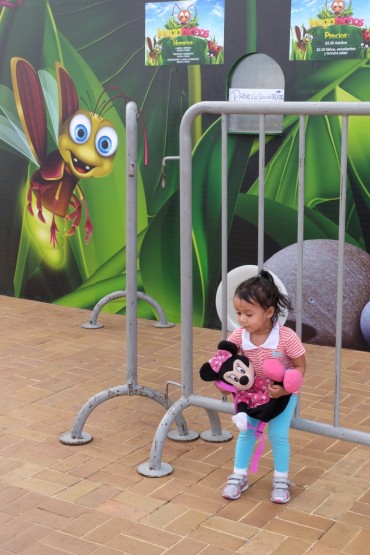 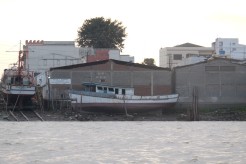 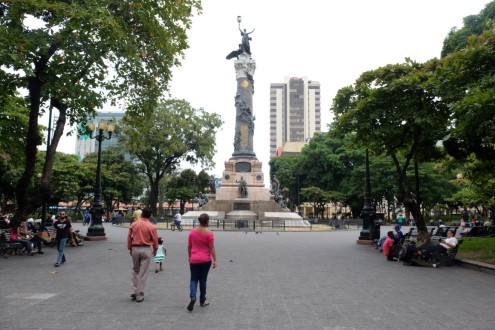 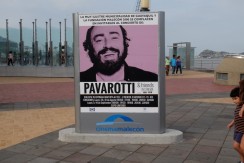 At some point in the afternoon, some police guys came in to do some inspection of the bus. Alex was sitting 2 seats away in front of me and a police woman asked him for his passport and to show her the entry stamp and then asked him to open his bag and removed some of the items to show her. Not sure why he was the scapegoat that day more than any of us but she was pretty aggressive to him! They didn’t find anything wrong in the bus and left shortly after.

Later we had a break at this terminal. 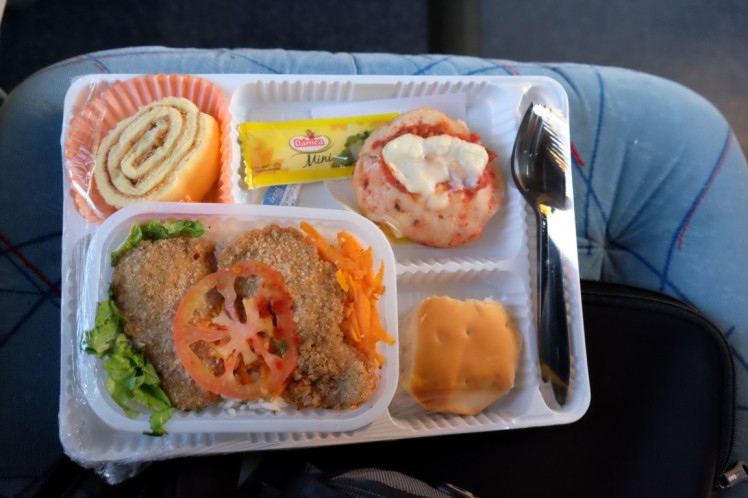 Golden hour of the sunset time. 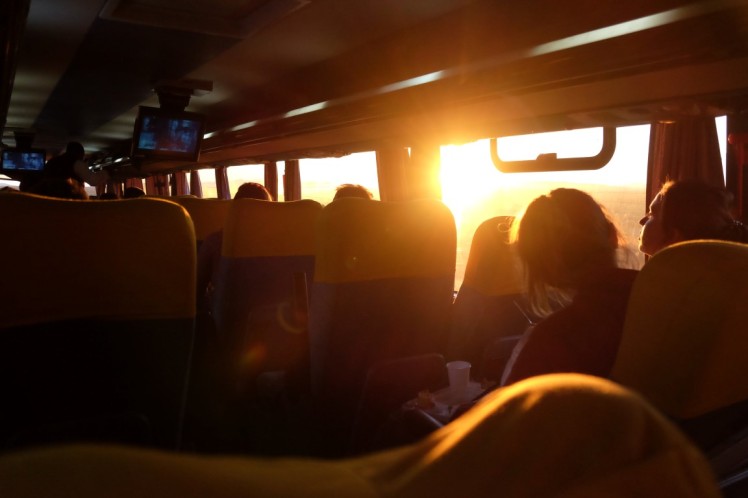 To the right, the sun disappeared behind the hills. 8.58pm. 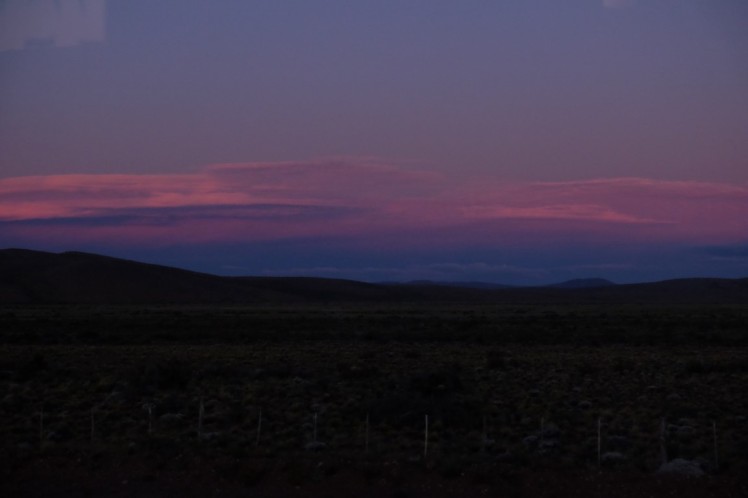 10.06pm. The sunset in Patagonia takes over the entire sky and lasts forever, making it so special even if the colour changes are not the most sensational compared to other places like Western Australia. 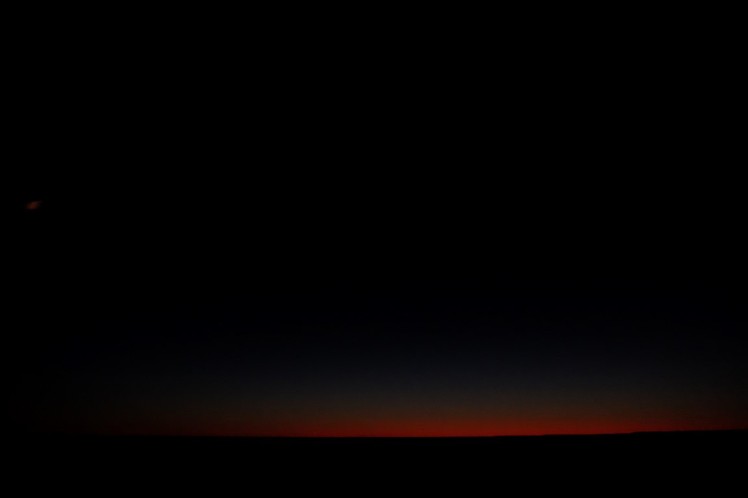 5.05am Sunrise time. Taking the sky over as much as sunsets do.

Mountains in the distance 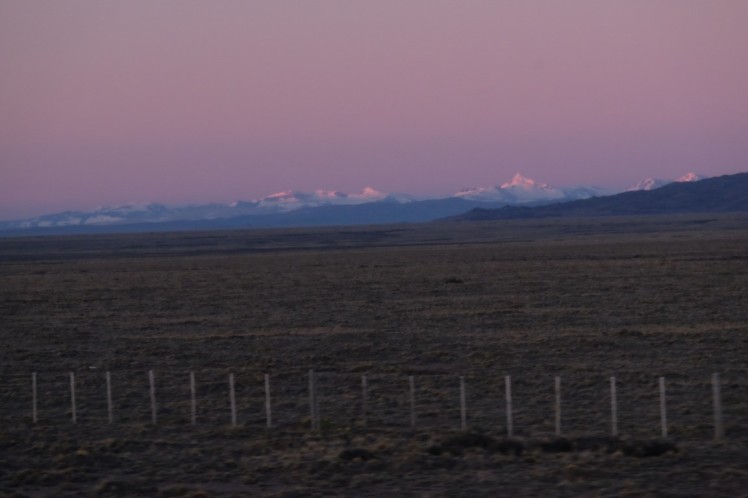 Horses grazing, having a huge land just for themselves. 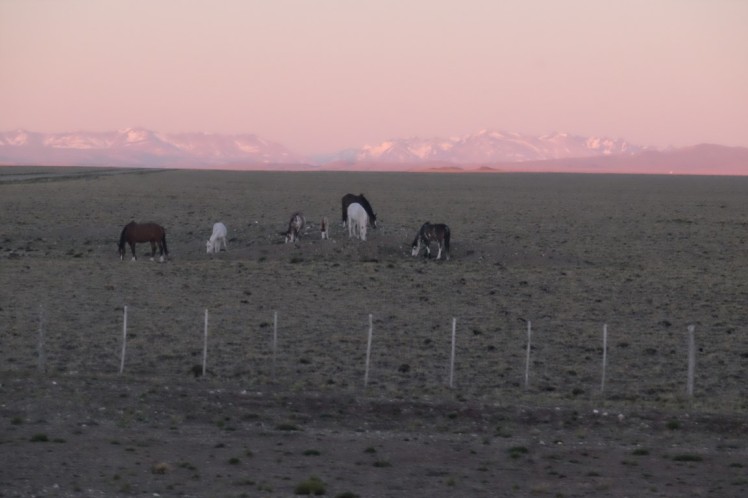 The sunrise was half-way through, still leaving some areas in the shade.

5.52am. Finally appearing behind the hill.

The road when looking back, behind us. 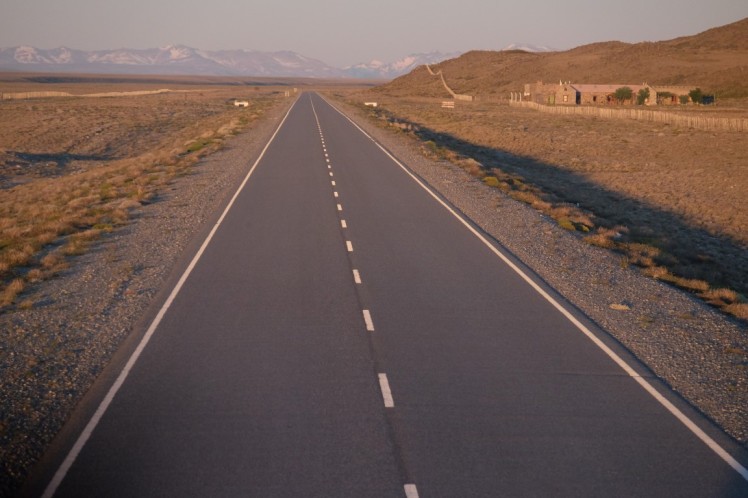 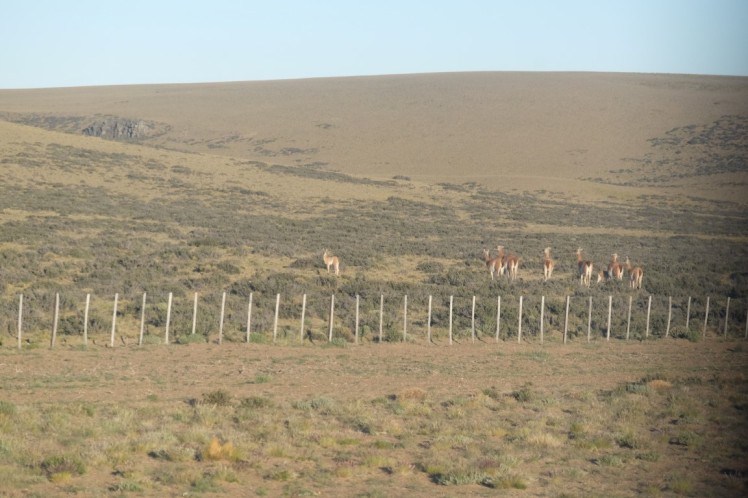 Two guys had joined the bus ride and were now sitting on the last seats at the back at some point and were telling me about their crazy hitch-hiking adventure. Jeremie was from France and Adria from Catalonia, living in France. Before to board the bus, they had forced him to put socks on as they didn’t want people to not have socks on in the bus apparently. Adria didn’t really like looking like a German with socks in his sandals but had no choice! I said that should finish on the blog. 🙂 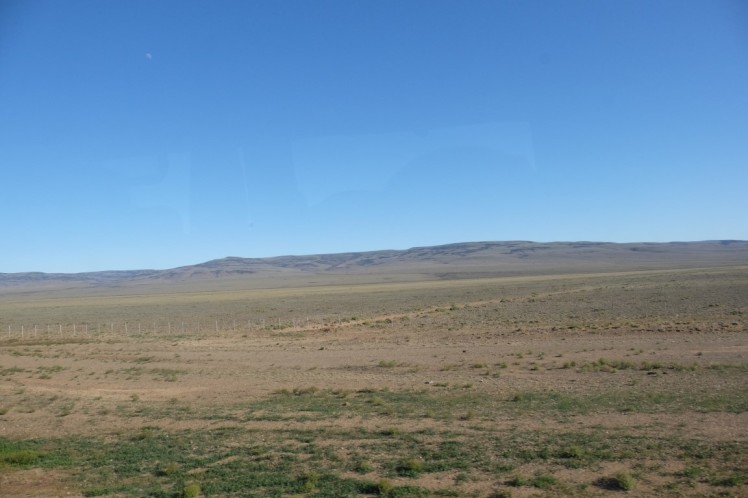 The road ahead of us. Got quite bumpy and uncomfortable. 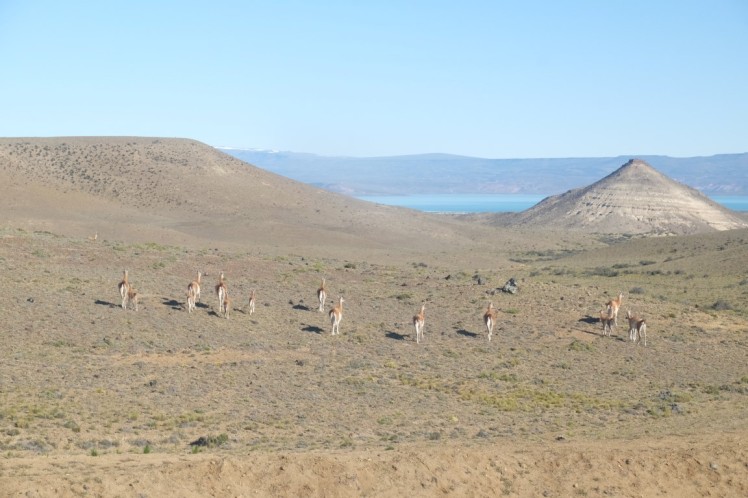 Looking behind us. Bumpy and dusty. 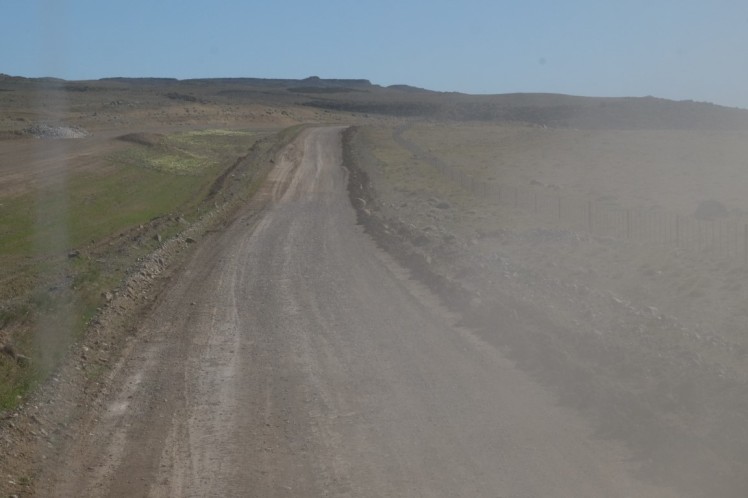 Around 11am, we started seeing mountains and spotted the famous Fitzroy for the first time.

To the left was this lake, Lago Viedma. We were getting closer! 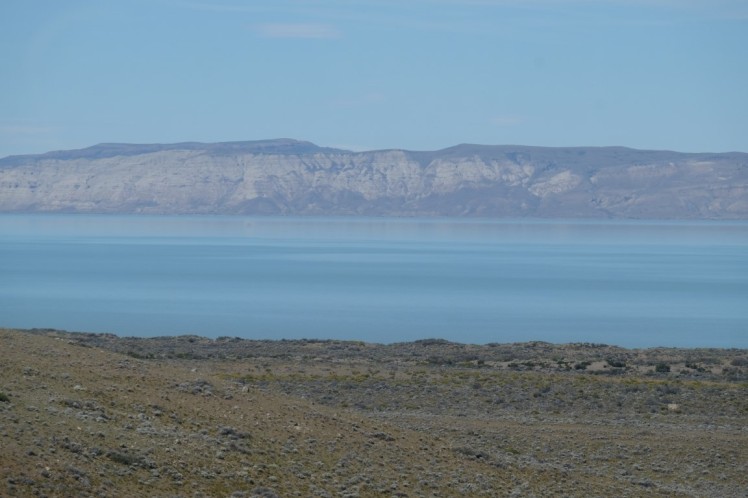 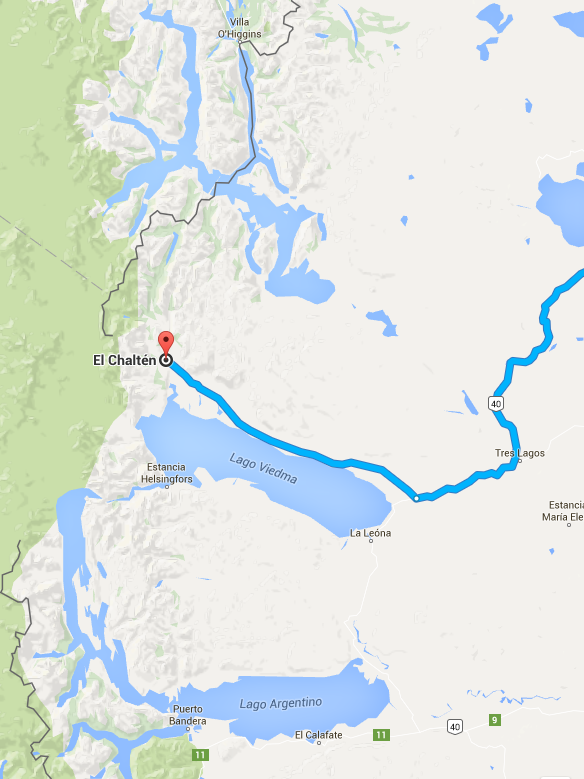 The road ahead of us. The beautiful mountains surrounding El Chalten. With Adria, we went to the front of the bus to grab that shot. Then we spent the rest of the journey trying to take more shots of them from our seats. The bus kept going left, right, left, right and we kept trying to take the shot from the left, from the right, from the left. He joked that soon we would be there and not need to do that and laugh about the crappy shots we had taken of these mountains from the bus which turned out to be true later. But these mountains are so fascinating when you get to see them for the first time!

And here was El Chalten in view!

We got there at 12pm. 1,000km in 19 hours, gone! Great time of the day to go find a hostel and then get some lunch! Besides, what was amazing was the weather!! El Chalten has the reputation of having bad weather most of the year!

This afternoon, let’s go see some condors for a short walk!