I woke up around 7am and grabbed my bags, did a check-out and walked to the El Calafate bus station. I got there around 7.30am, ready to board the 8am bus to Puerto Natales!

The 272km bus ride to Puerto Natales was pretty. Here is the map of the journey. 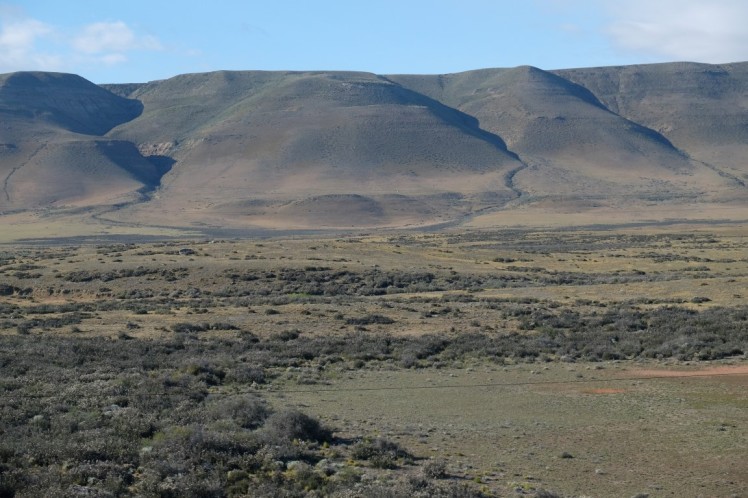 The road we were on. 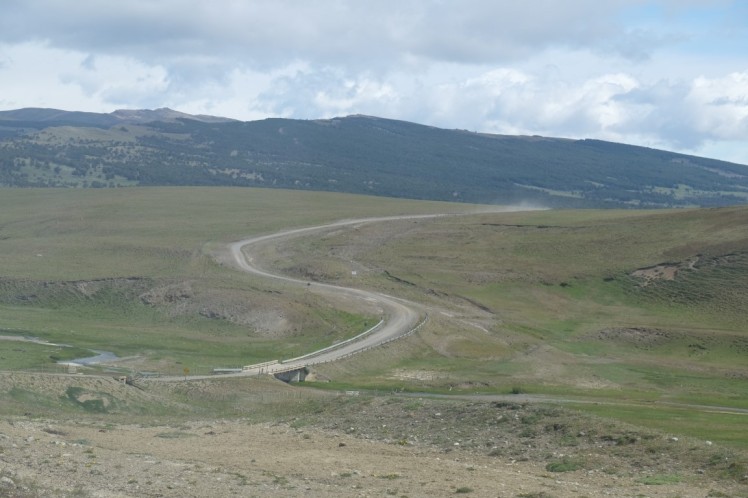 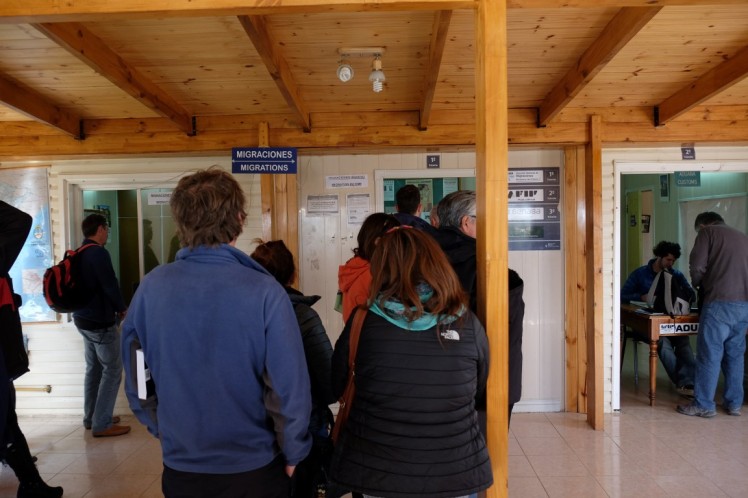 Then driving a bit.

Arriving at the baggage pest control.

We aligned our bags and waited for our turn.

Meanwhile, there was even a dog sniffing inside the bus.

Getting the stamp in to enter Chile.

Beautiful landscape on the Chilean side. 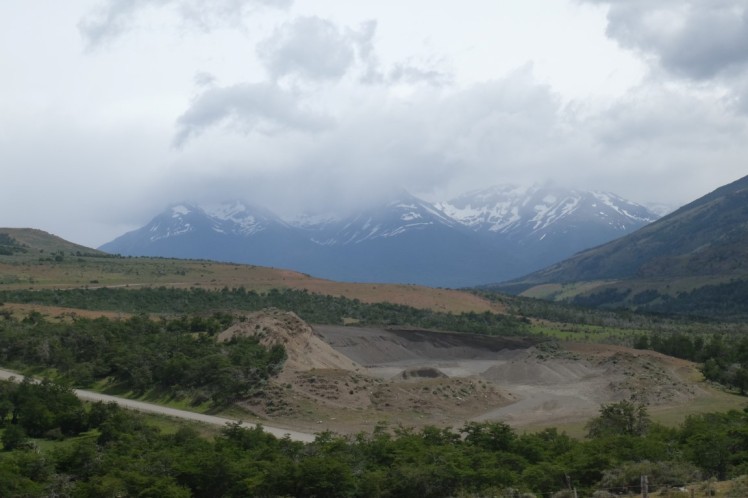 We arrived in Puerto Natales around 1.30pm on a windy and rainy day.

At the bus station, there were lots of beautiful adverts. We could tell that Puerto Natales was a very popular touristy destination, being the starting point for any adventure to the legendary Torres del Paine National Park!

In the bus, I chatted with Benedicte, a French girl. She had a booking for the Erratic Rock, a hostel highly recommended in the Lonely Planet located right next to the pub where a talk is given at 3pm every day to hikers about to hit the Torres del Paine. I decided to walk with her to the hostel and see if they had any spot for me too. On our way to there, we passed this statue of a miner, symbol of a time where people from Puerto Natales were working in the coal mine of Rio Turbio in Argentina. Originally, Puerto Natales was founded in 1911 to be a harbour for the sheep industry, but once the sheep industry started declining, people turned to mining.

After getting lost for a while, we finally made it to the Erratic Rock.

Luckily they had a last bed for one more person! I arrived just on time for it! We dropped our backpacks in a 5-bed dorm room located just above this sign. And then we headed to Base Camp, the bar located right next door that you can see in blue and white on the left. In there, we took seats and waited for the 3pm talk to start. On the wall to the right was this map of Torres del Paine.

We picked up the flyer they were giving with tips about the hike.

The bar started filling up for the talk. The vibes were there. We were not preparing a trip to the top of Everest like in the Everest movie but we were all getting excited about going to Torres del Paine in the next few days for a great adventure. I could feel the electricity in the air, the dreams everyone had in their heads, the joyfulness on the faces, the buzzing and chit-chatting going on. There are those moments in life that you share with a crowd of like-minded people who are all aiming at the same goal, dreaming of the same place, the wholy Graal of the day and those moments are precious and priceless. They are moments of pure joy and excitement!!! 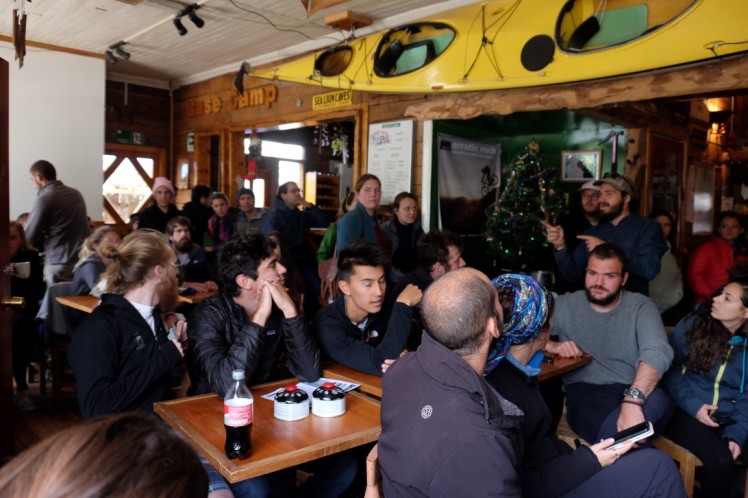 The talk lasted 1h30 and the guy presenting presented the map and gave a really thorough presentation about the different campgrounds, the distance walked between them, the weather conditions, the equipment to take on, the risks, the water situation, emphasizing that Patagonia river water is the purest in the world and can be drunk with no risk. He also gave some tips about what to take for the food and that’s where I had a revelation about the best food to take for quick easy cold lunches: tortillas! Not bread! What a cool idea. I took lots of notes. At 4.30pm, everyone was off again apart from a few people who wanted to rent from the shop. I was glad to have all my equipment and not being in the need of renting anything. It was also funny during the talk to hear people’s questions about the hike. I felt proud for once. I had started my trip 6 months before with no hiking experience, and here I was, almost at the end of my North-to-South trip with a bit more experience and confidence, commenting in my head “Yep, I know the answer to that. Yep to that too. Yep, that one. Nope, buddy, you should never do this. Agree. Yep, no, yep.” It was a great feeling to feel that I was not that totally unexperienced hiker I had been on the first trek to El Cocuy National Park in Colombia early August, just a few months away. Benedicted caught up with two travel friends of her she had met a few weeks before in another spot of her travels, and I shoot off on my first food logistic errands. The guy during the talk had encouraged us to buy food from small local stores. There was Lola, a French girl in our dorm who was working on cruises for a few months and was off that day and also needed to buy food so we left together and walked to a local store called Tienda Maria Cristina. I was happy to find it opened because we were all fearing that shops would be closed on that day as the 8th December is a public holiday in Chile which celebrates the Feast of the Immaculate Conception. More info about that here:  https://en.wikipedia.org/wiki/Feast_of_the_Immaculate_Conception

In the Tienda, we found a few things but not that many though. The shop was quite small.

It was enough food for Lola but I needed more stuff so I also went to Don Bosco where I found lots of great hiking food. 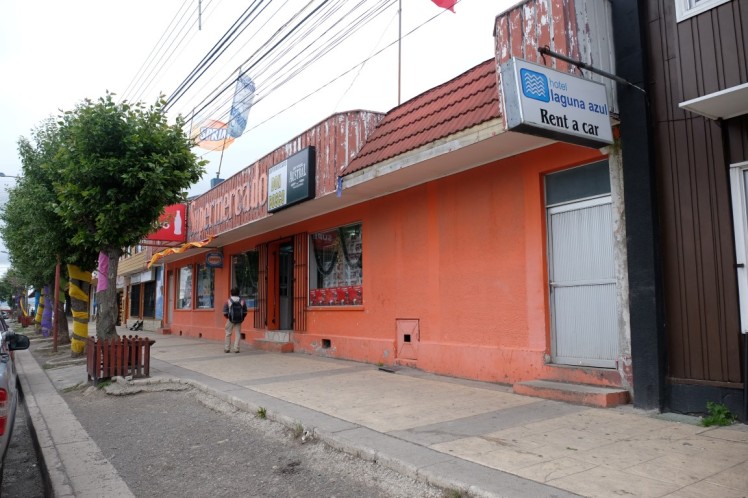 I bought in particular some cream cheese that the guy during the talk had recommended as great cheese for the hike to spread on tortillas as it lasts long. In the Don Bosco store, I made friends with Jade and Vincent when I asked them where they had found a certain product. They were preparing the W hike to go for 5 days leaving on the next day. We talked food for a while and shared tips. 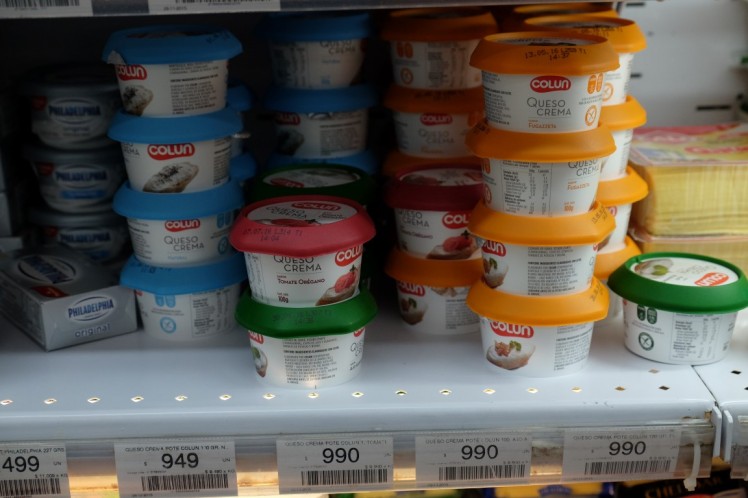 After Don Bosco, I went to the massive store called Unimarc to find other food and ran into Vincent and Jade again and we chatted even more. Then I started walking back to the hostel and this time ran into Jeremie and Adria, the two guys who had boarded the bus I was on between Esquel and El Chalten. We chatted a bit and agreed to meet for beers at the Basecamp bar later on. I came back to the hostel and started packing a little bit the stuff and food in preparation for the hike. I wanted to do the full circuit called also the “O” plus the tail (which makes it a “Q”) in 10 days so I decided to use the next day to prepare further. Around 9pm I headed to the bar but didn’t find Adria or Jeremie but started chatting with a group of Israel hikers who had just come back from the W and were showing the map to another group of Israeli and giving them tips about the hike so I listened carefully, asked questions and finished the evening by having pizza and beers with them and whoever was nearby to chat to. The beauty of that bar was that everyone was either coming back or going to Torres del Paine. This was the one and only topic of conversation, an exciting one and endless one for an evening!!! And the beer…was good!

Tomorrow, let’s get ready for a 10-day hike in Torres del Paine! Whoohoooo!!!