I woke up around 7.45am and decided I would try to change hostel if I could as El Calafate Hostel was just way too noisy. Good vibes surely, but a party place when the only thing I was looking for was to finally get some sleep! First, I had breakfast with Carolina the Argentinian girl from Buenos Aires. Then I went to the lavanderia to drop my clothes. Then I walked around in search of a hostel. I finally found one left, right, left of El Calafate Hostel called Los 2 pinos which looked more quiet.

I went back to the El Calafate Hostel, did my check-out, dropped my bags at Los 2 pinos, and then stopped at the bakery where I bought a sandwich and 2 empanadas for the day. 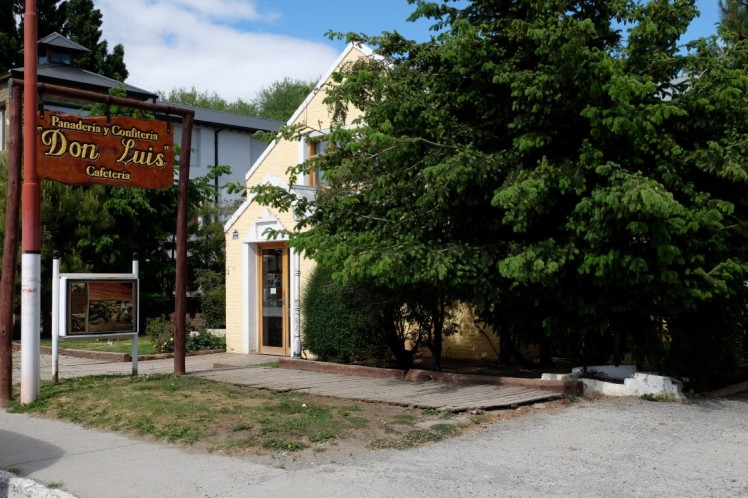 Then I went back to El Calafate Hostel and waited to be picked up. The Chilean girl of my dorm, Tamara, was also going for the mini-trek so we waited together. She was working as a nurse and living in Osorno and had taken 2 weeks holiday to go see Patagonia. A few days before, she had also just been hiking with her tent in the mountains of El Chalten and showed me awesome shots, including a great shot of the sunrise at Laguna Torre that I was too lazy to wake up for!

Around 11am, a big bus picked us up. We went in. We stopped at various hostels where we picked up more people. The bus got completely full!

We were sitting on the left side as I had learned the day before that it was the best side to see the lake and Perito Moreno glacier when approaching it. I was amazed by the landscape again. 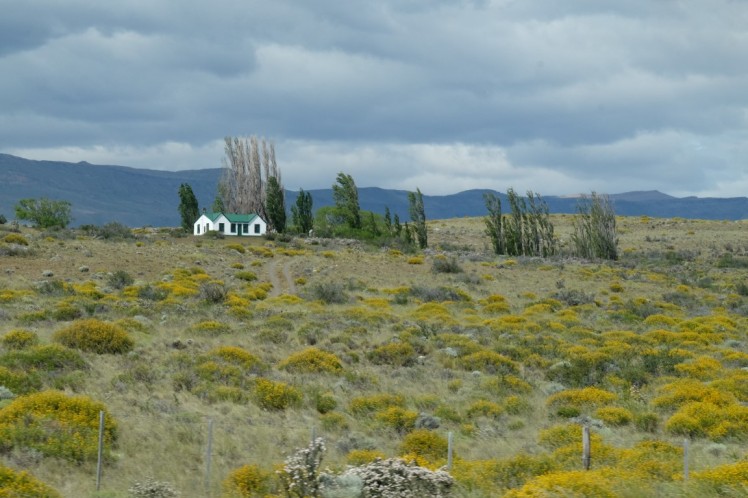 It was exciting to get closer to the glacier again.

We arrived at the entrance and the guide explained to the group the map while I sneaked passed without waiting, hey hey, I had been there already. ;-p

We spent 2 hours there, from 1pm to 3pm. As I had walked around a lot the day before, I walked a bit more but then I just found a good spot from which I pointed my camera towards the glacier and waited for parts of it to fall this time. It rained for a while which created some shade on the glacier. My battery was almost flat so I changed it with another one. Flat too. Then a third one. Almost flat too…and then the…fourth one…Oops. I realised they were all almost flat and that indeed I had forgotten to recharge them for a week. BIG Oooops. I could still take very quick photos luckily.

It was awesome to stand in a spot and just contemplate this impressive glacier. There was a moment where a massive piece fell from quite low but I was too slow to record it. But it created waves and moved away all ice located near the glacier where the ice block had fallen.

Last look at it from this angle from the top. 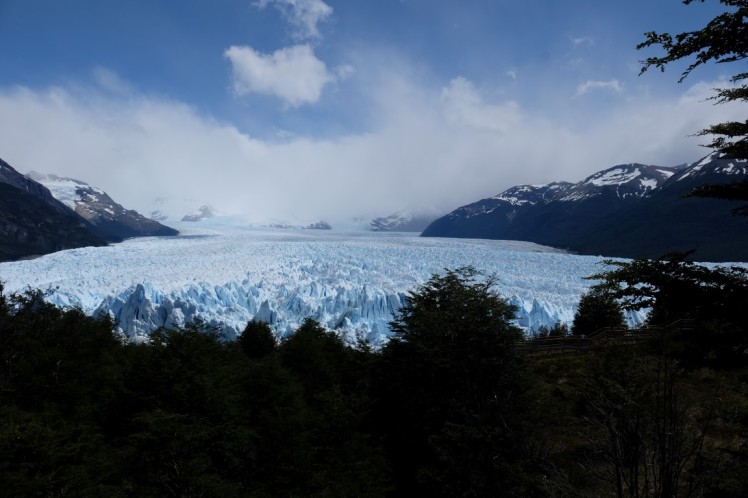 At 3pm, the Hielo Sur bus picked us up.

It drove us to the boat`s pier where everyone queued to get on the boat. 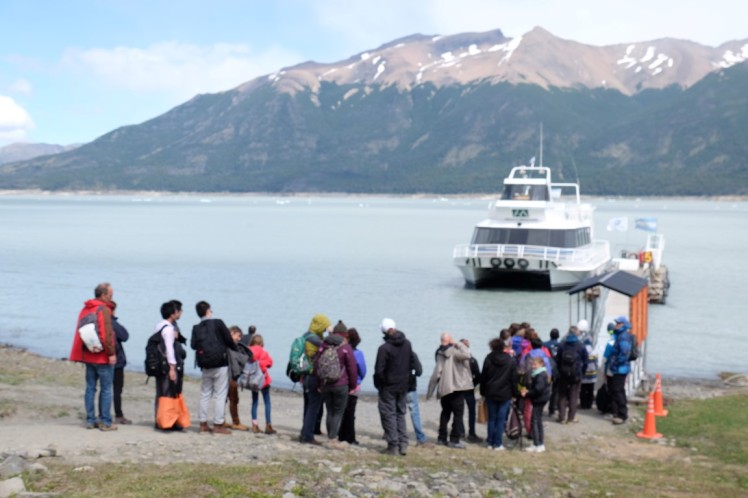 The boat’s name was Yagan, as the name of one of the few native tribes which used to live in Patagonia and is now extinct.

We went with the boat to the south side of the glaciar. Here is a photo taken from the top deck of the boat. Because it was too windy in the best shooting spot where only one person could stand, no one wanted to stay too long there. This was great as it forced all of us to take turns.

Getting closer to the southern side.

It was very exciting to see people walking on the ice and know that soon it would be us!

Welcome to the Hielo Sur experience!

We dropped our backpacks, went to toilets, took water, sunglasses and gloves and started walking on some bridges to the starting point of the walk.

The view of the glacier while getting closer was great. We could see the little groups walking on it. I was getting really excited about it. 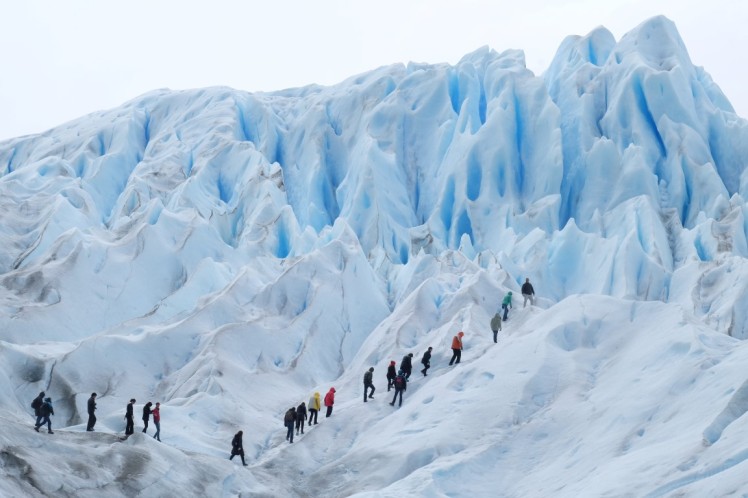 We were split in 3 groups and the guides put crampons on our feet. It was probably faster and safer for them to do that than to explain to us how to put them on. While we were getting our crampons put on our feet, it was raining a bit but not too much.

The guide explained how to walk. With feet opened wider than usual and walking a bit like a duck when going up, and feet straight when walking down with the back a bit backwards. It was important to put the feet straight when going down to avoid the ankle going a bit left or right with pressure that could make the foot slip and make you fall.

Then we started walking. We were 18, 16 girls and 2 guys actually which I thought was funny and 2 guides, one in front and one at the back. They were communicating really well with the group and were very friendly, making conversations with everyone, making sure everyone was ok, paying attention that no one fell. I was quite in front. Here was the group behind me.

The landscape of the glacier was just incredible. I really felt like if we were walking on the moon. It was different from walking on the snow with crampons. I had never walked
like this on an icy landscape, it was very unique. 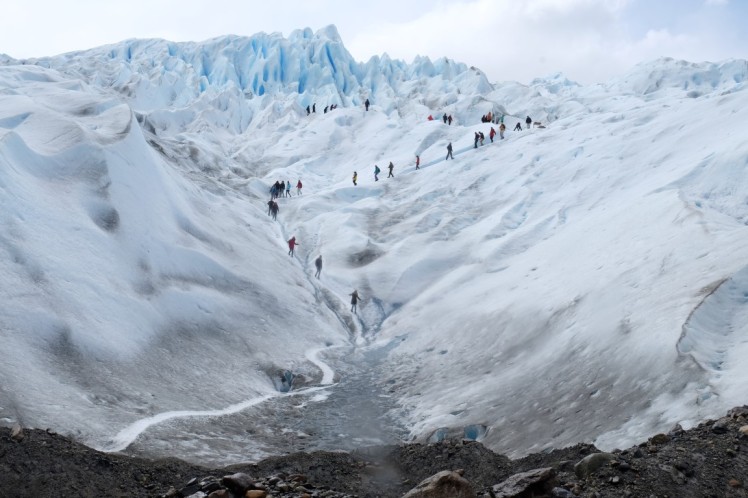 We passed some holes where wee could see a little river forming below the glacier which water was going to the lake. 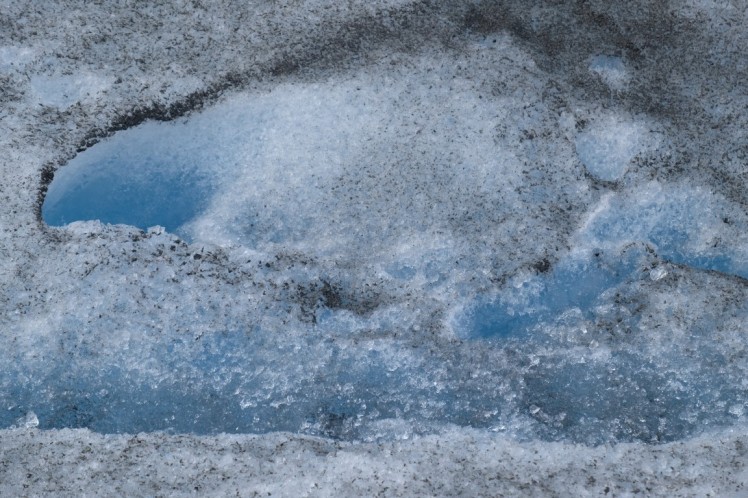 We passed a lot of blue holes. This specific type of blue colour is so unique.

Here are a couple more photos of the walk.
At the end of the walk, we arrived at the bar. The guide was joking with girls “May I invite you for a drink at the bar?” Ahahah. 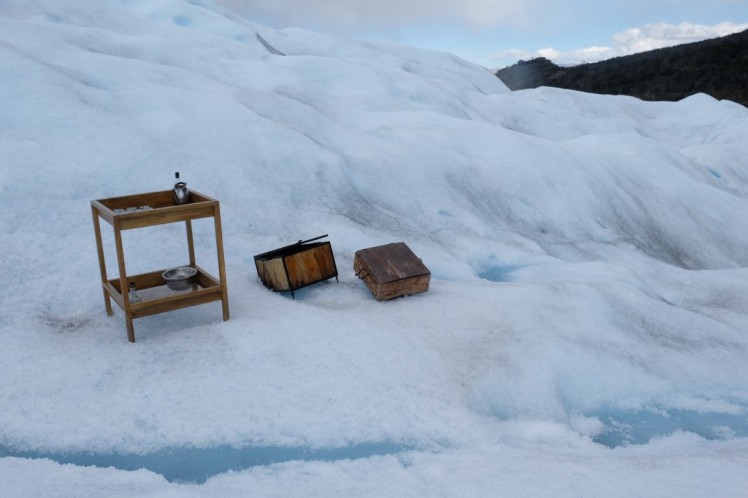 We had some alfajores and some whisky on glacier ice. Yummy. We could then drink some water from a blue hole nearby. So pure and fresh too. Then we went down.

There was this other hole in which water was disappearing, also going  below to some secret path to the lake. 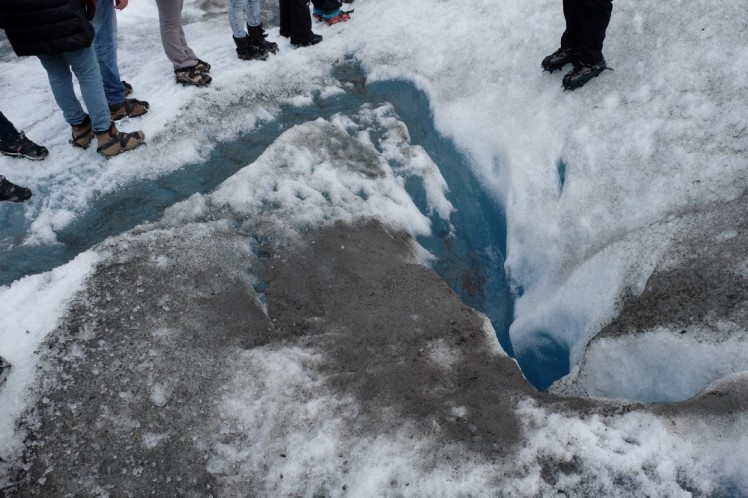 We took off our crampons. 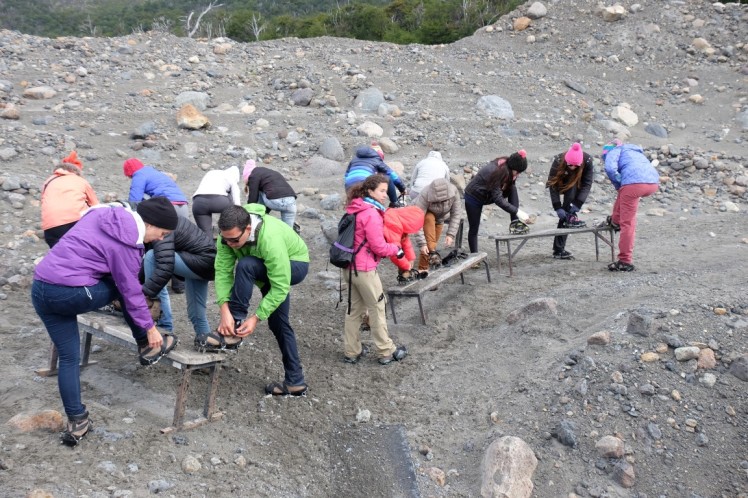 We walked back on the bridges to the boat`s pier. The vegetation around was very nice.

We climbed a few beautiful rocks to sit and observe the glacier one last time.

Some huge block fell in the water again but we were still walking up the rock with Tamara at the time and besides I would not have had enough battery left anyway to capture that. Here is a shot of the boat and the glacier in the background, seen from higher up on the rocks. 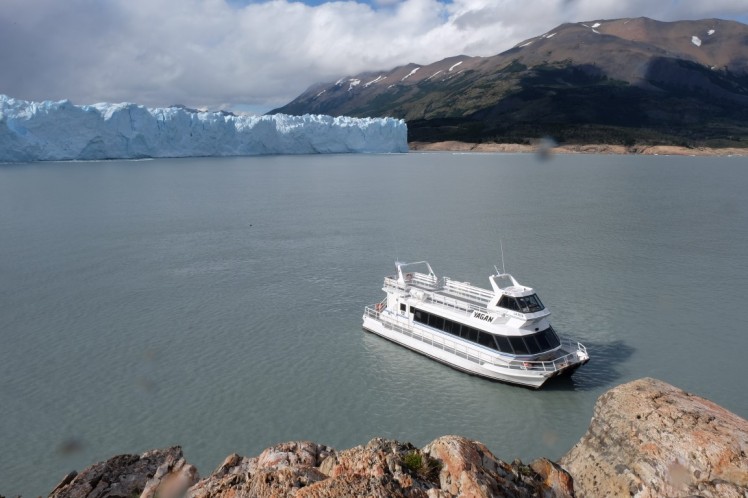 A last look at the glacier from the boat on the way back. So happy that my batteries lasted that long even if that meant that I had to keep swapping one for another constantly. 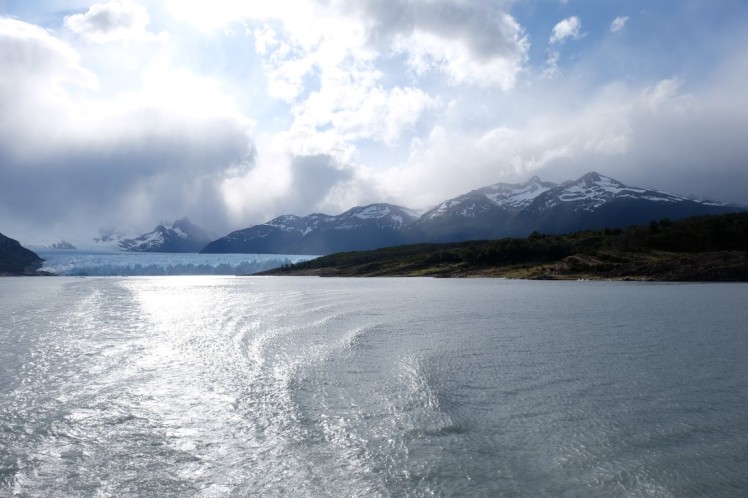 We got back into the bus. This time we got some seats on the right, to see the Perito Moreno for a last time from the bus and also see the lake. Bye Perito Moreno! Most of the way back we slept. I woke up later on and turned back to look who was sleeping and almost everyone was asleep, it was funny. Our seats were at the front, just behind two guys. Here was the view of the road and landscape in front of us. All this landscape in this journey between El Calafate and the Perito Moreno glacier was very similar to the one in Western Australia. 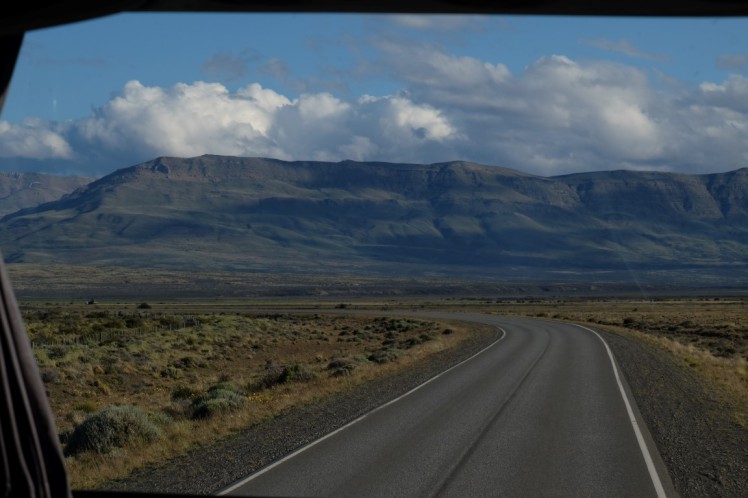 We arrived in El Calafate and the bus dropped everyone near their hostels. I said good-bye to Tamara and walked to the lavanderia where I picked up my clothes. Then I walked to Los 2 pinos where I did a check-in. I met with Sunniva in my dorm of 4 people who was from Norway and studying political science in Buenos Aires for a year. She had just finished studying for a 4-month semester and was on a Summer holiday now for 3 months and then would study roughly 6 more months. When I entered the dorm room, she was in the process of writing her last essay on this topic “Why have South-East Asia countries like Japan, Korea, Singapour succeeded in developing new industries like new technology ones when South America hasn`t?” Interesting question. 🙂

It was 8.40pm. I recharged one of my camera battery for 15 minutes and then walked to Laguna Nimez. On my way to the laguna, I saw this old car.

I also saw this other old car. I could imagine kids coming here, sitting at the wheel and pretending for hours that they were off to somewhere. Cool car!

I walked around the laguna on the marked path for an hour. It was a great place to watch birds. Here was a sign listing all the birds which could be seen there. 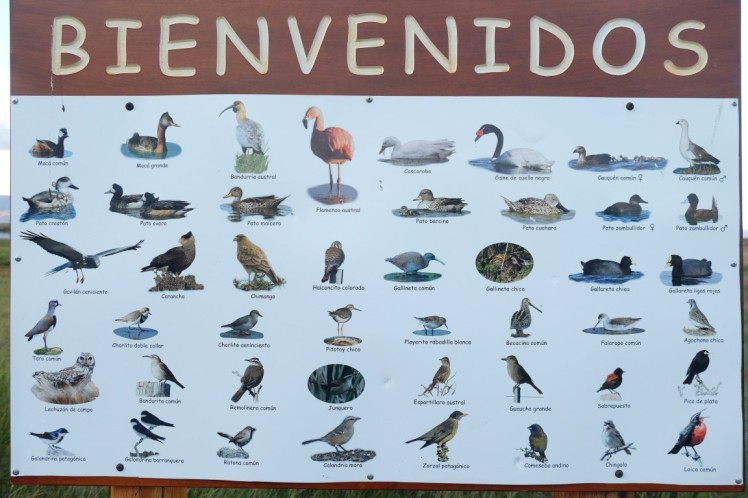 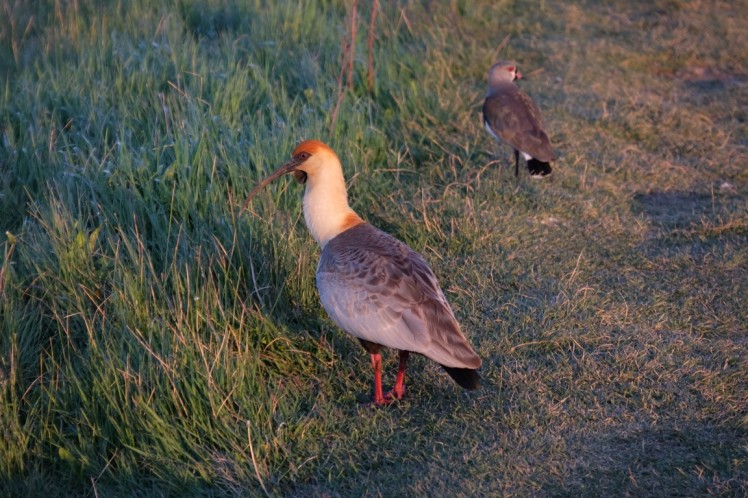 Some type of eagle

The sunset was very pretty over the lake.

A couple more photos of the walk around the laguna 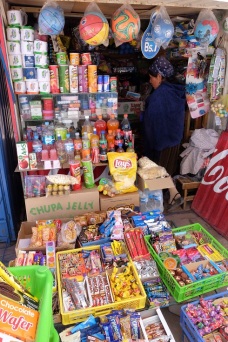 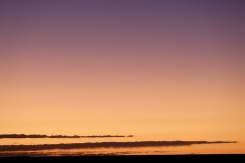 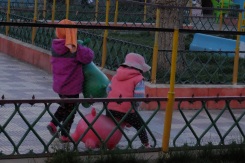 I saw this old bus while getting lost on my way back.

I was back at the hostel around 10.30pm. I had left-over pasta from the night before and there was a micro-wave. That was great, no cooking needed that night! I ate the pasta and lingered around chatting with Suniva and her travel buddy friend who had been studying with her too in Buenos Aires and was from Munich. I used the left-over fruits I had and made a fruit salad I shared with them while they shared their red wine. It was a nice evening chatting! I repacked my bag and was in bed. It was 1am by the time we went to bed. That`s the thing with Patagonia. A sunset at 10.30pm make you linger around for longer and go to bed later while you still wake up early. I am getting more tired these days than in the past few months where sunset would be at 6pm-7pm in Colombia, Peru or Bolivia!