It was now one month since the terrorist attacks in France. One month already. In one month, I had gone from Saint Martin de Los Andes to Bariloche, El Bolson, Bariloche to Puerto Varas, Ancud, Castro, Quellon, Chaiten, Futaleufu, Esquel, El  Chalten, El Calafate, Puerto Natales and now Torres del Paine. So many places!

I woke up with the alarm clock of 6.10am again. The weather outside was less cold than the previous morning at Italiano, although I had some frost on the tent! 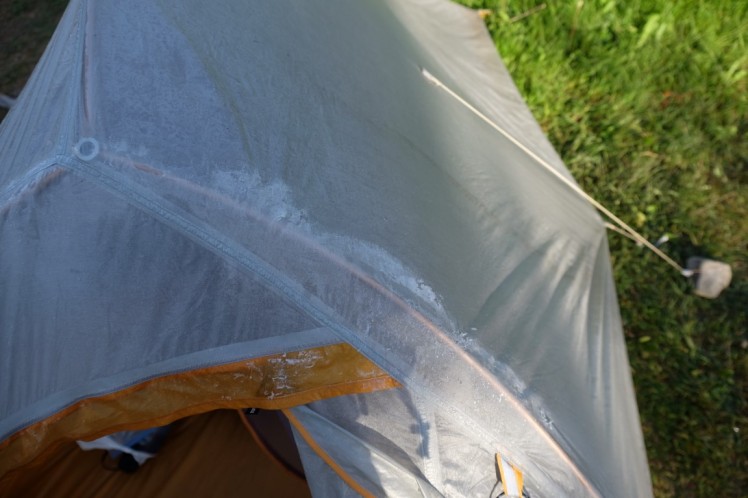 The shining sun dried the tent quickly, luckily. There was no wind. We had brekky first and then packed the tents which were dry by that time. Here were a couple of photos at the campground. The brekky, the showers block, the little grocery store, the recycling spot for gas bottles, some cool birds, the surroundings. 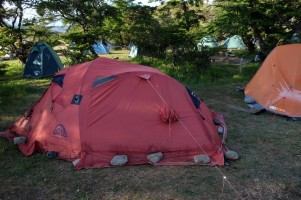 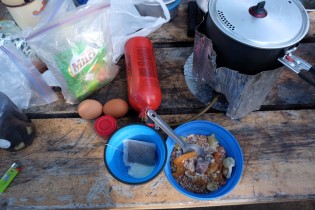 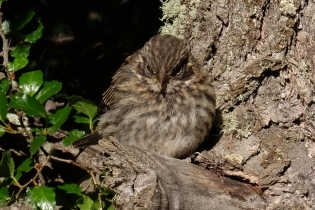 We started walking around 9.15am from Hotel Las Torres in the direction of Chileno campground. There was a fox hanging out in front of the hotel resort.

He wasn’t shy at all, looked really tame.

Here is a video of him playing.


The path was constantly going up and up. I had put my hiking pant and rain pant and gaiters on like the three previous days, thinking it would be cold that day too, but I was boiling and removed layers keeping only the hiking pant on. I also removed my Gore-Tex jacket and walked up in my merino short sleeves shirt. I ran into the Norway guys again who were in my dorm in El Chalten and that I had seen at Italiano 2 nights before. They were on their W – Day 4 and exiting that day. The more we went up, the better the view got. There was a really beautiful view of the valley behind us and of the riverbed. Here are a couple of photos of the walking up. 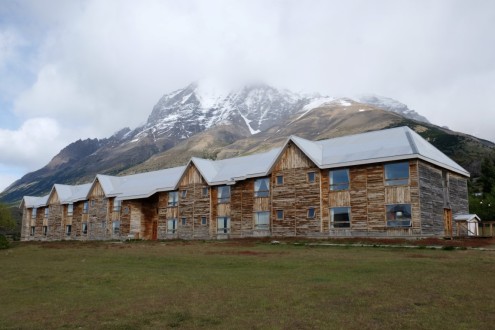 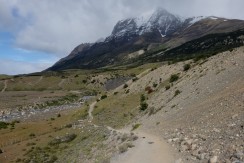 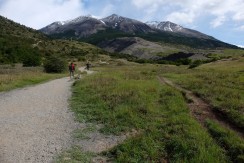 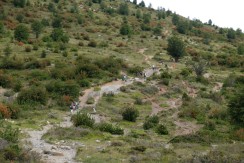 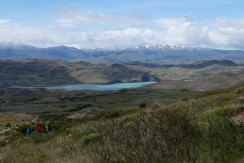 Once we arrived at the top of the hill and started walking downhill to the other side, an breathtaking view was waiting for us, along with a pretty cold wind. I put back on the Gore-Tex jacket and stopped for a bit, enjoying the view.

Some photos getting down to Chileno campground.

I arrived at Chileno campground around 11.45am. Jade and Vincent as well as Alex, Theo and Julian had already setup their tents next to the reception as the designated campground was another 10-15 min walk, located away from the reception / kitchen area.

I went inside and ask the reception if there was any spot near the building where I could put my tent up as my friends were right here too. Here is the reception.

They looked at their map and said I could actually just sleep in one of the tent already setup on one of the platforms. Awesome! No tent pitching and unpitching that night. Great! The tent I slept in was quite roomy, with a bigger height, quite comfy. More sturdy too probably.

We had lunch in the kitchen building where there was a cool “fireplace” where we warmed up. 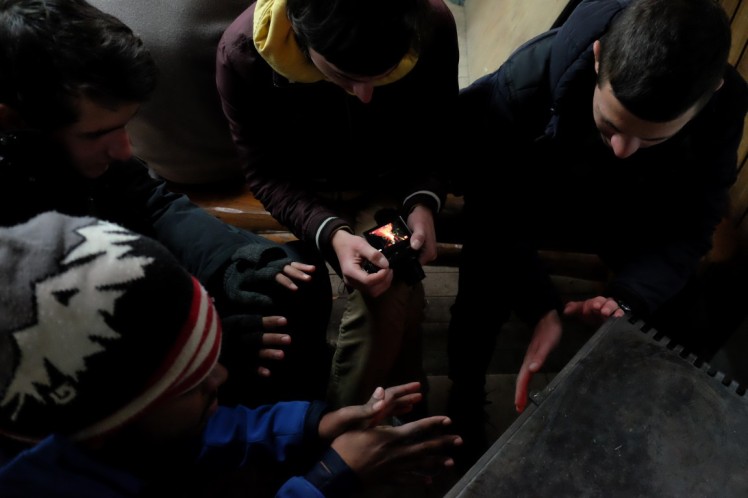 The kitchen was pretty big which was really nice.

Then we took small day packs with water in walked to the famous Torres. I was at the back chatting with Vincent all the way up, while Jade, Alex, Theo and Julian were pretty fast. Here are photos of the walk going up. It was pretty steep but the views were great. 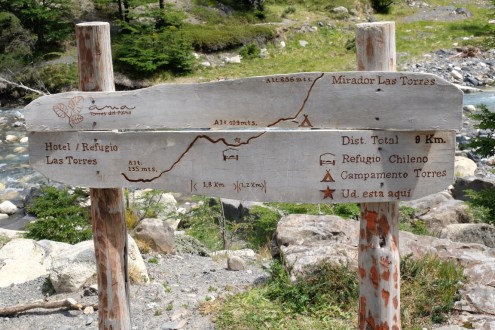 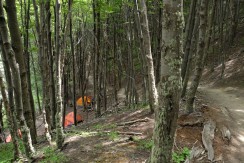 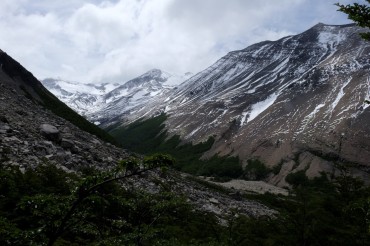 Once we finally reached Las Torres, the view was quite similar to “Los Tres” in El Chalten. The laguna was of a greenish colour and well surrounded by the towers, the peaks located behind it.

The five of us hanged out there for a while, chilling, enjoying the sun, chatting, watching the people doing selfies or group photos, doing group photos ourselves, climbing a few rocks. There was a guy who went for a dip inside the lake for 20 seconds. He was being
filmed and photographed by a few friends so we wondered if they were actually doing some project or something around him. Once he got out, a guy went to tell him off that it was not allowed to swim in the lake. Oops. Some photos at the lake. 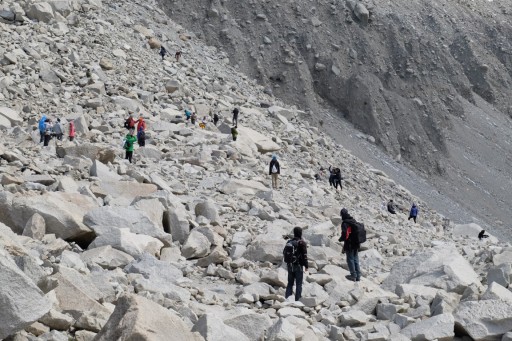 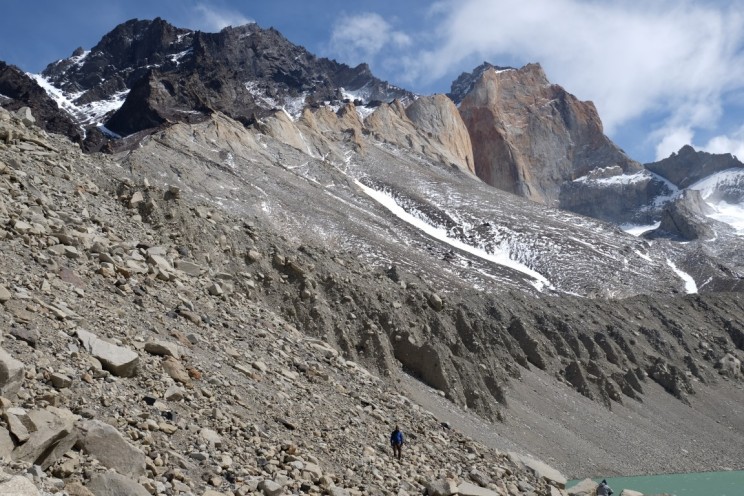 We left the place and walked back down. Bye Los Torres! 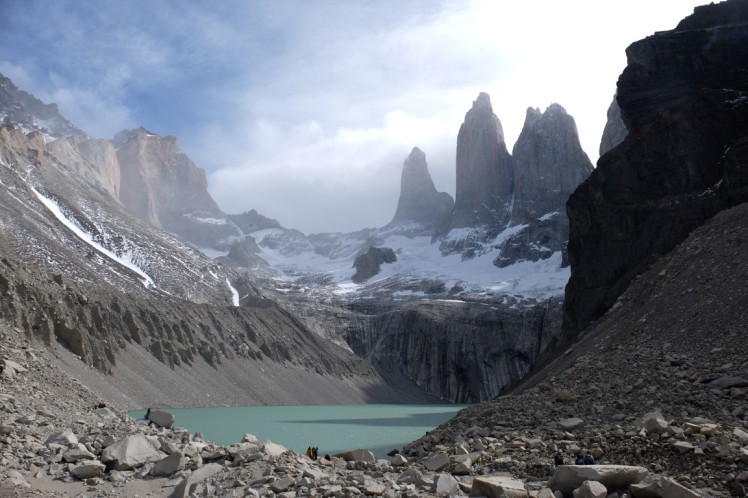 At some point the guy who had gone in the lake passed us, so I asked him if they were doing a movie or something. He said he was a model for the Columbia Sportswear outdoor clothes and they were here with photographers and film makers and content writer for 4 days only for him to try on the Columbia clothes but going for a dip in the lake was just
for fun. The next week he would be flying to Japan and two weeks later he would be in Chamonix. Cool life hey. With Vincent on the way back, we had fun stopping and taking long exposure shots of the flowing water. Here are some photos of the walk back. 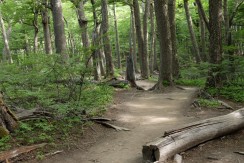 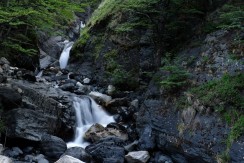 When we came back to the campground, the showers were full, so we made dinner first in the kitchen. I made pasta and parmesan with salamiand even a spare carrot that Jade had. Special treat! 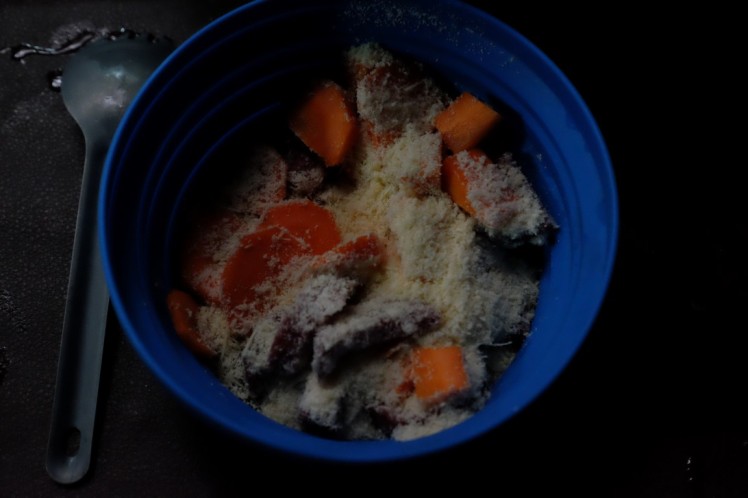 It was a very busy kitchen, with great vibes, everyone looked really happy.

There was a girl playing guitar at the fireplace and some people dancing on music later on. 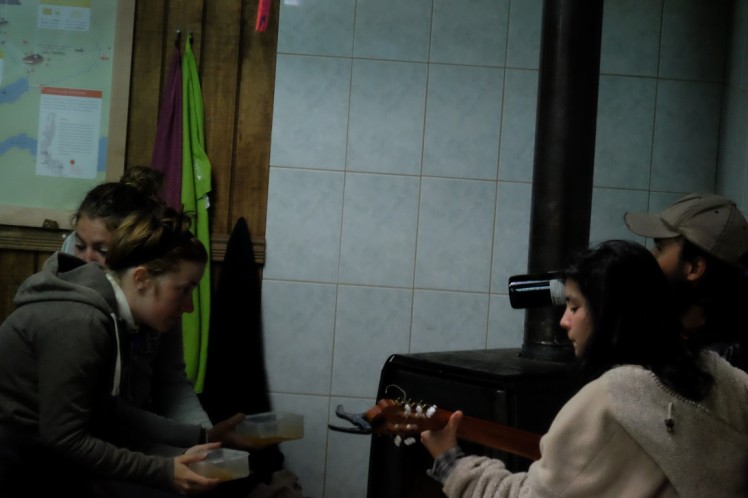 The music was good. The vibes were awesome. We had just been to Las Torres!! Life was beautiful. After diner, I went for a shower. It was a super super hot shower. So nice. Back in the kitchen to hang out there, I met an inspiring couple in their fifties, Ursula and Christopher. They had done amazing travels and had just been canoeing around Alaska the whole summer from July to September a few months before, and had just been cycling from Puerto Montt to Villa O’Higgins on the Carretera Austral for a month. Sooo coool!!

With Vincent and Jade, we boiled some water as any evening and poured it, me in my Nalgene bottle and them in camelback and metal bottle. I had introduced them the first night to the hot bottle magic and they loved it. Having a hot bottle you can put in your
sleeping bag on cold nights makes a huge difference.

Tomorrow, back to Hotel Las Torres, lunch together and while Jade, Vincent, Theo, Alex and Julian would be exiting the Park, I will be going to Sernon campground, off to the back of Torres del Paine, the less visited part!! So exciting!!